The Tie Phantom is a monster of ship decked out right, so we are going to take a look at some good builds that can be run for it.

First pilot we have is the lowly Sigma squadron pilot.  Yes he can cloak, but he is onlypilot skill 3, so it wont be doing him much good. at 25pts he is not cheap either.  I doubt I would use him unless I only had 25 points, but then that's 2 TIE fighters instead. 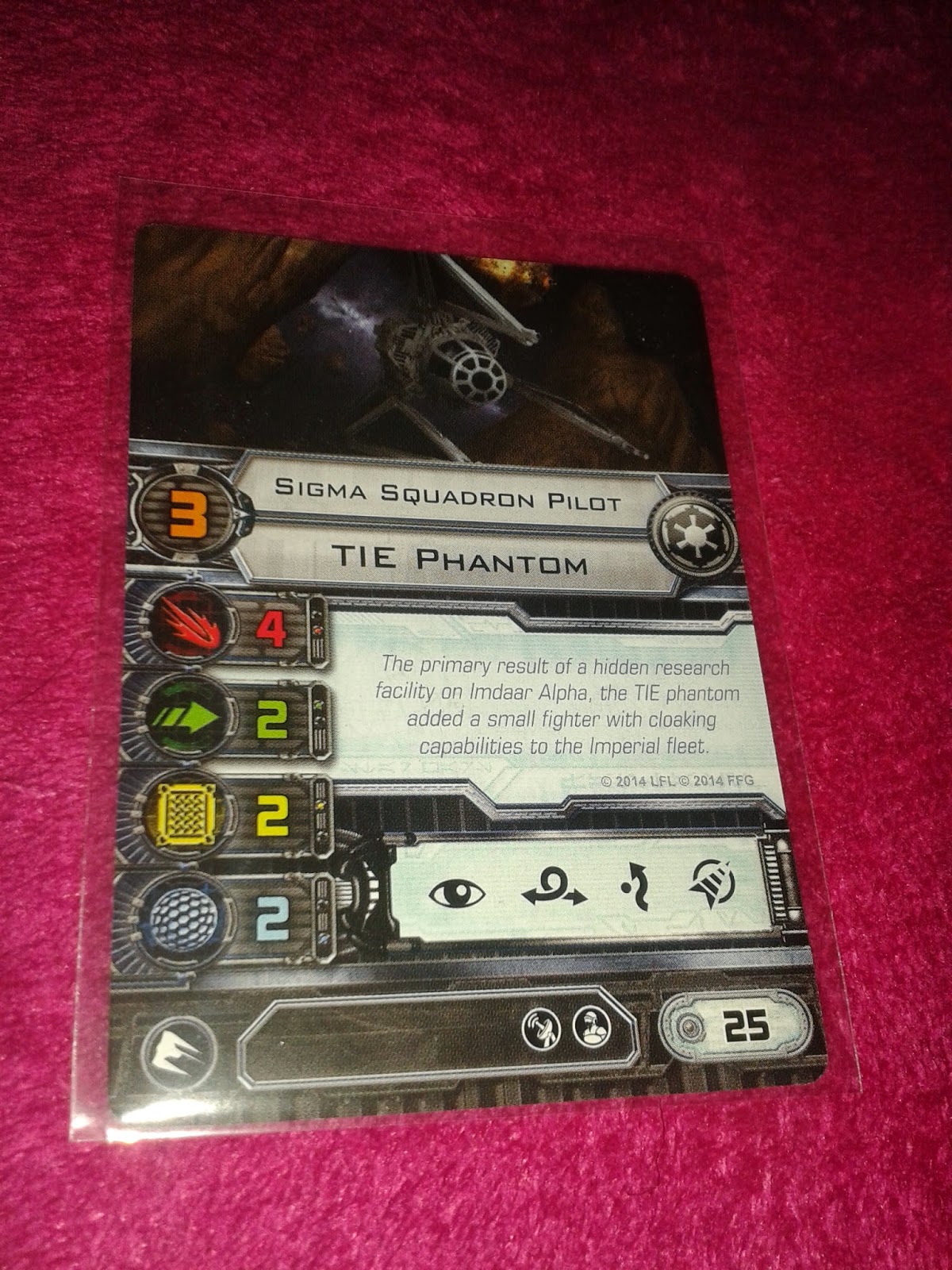 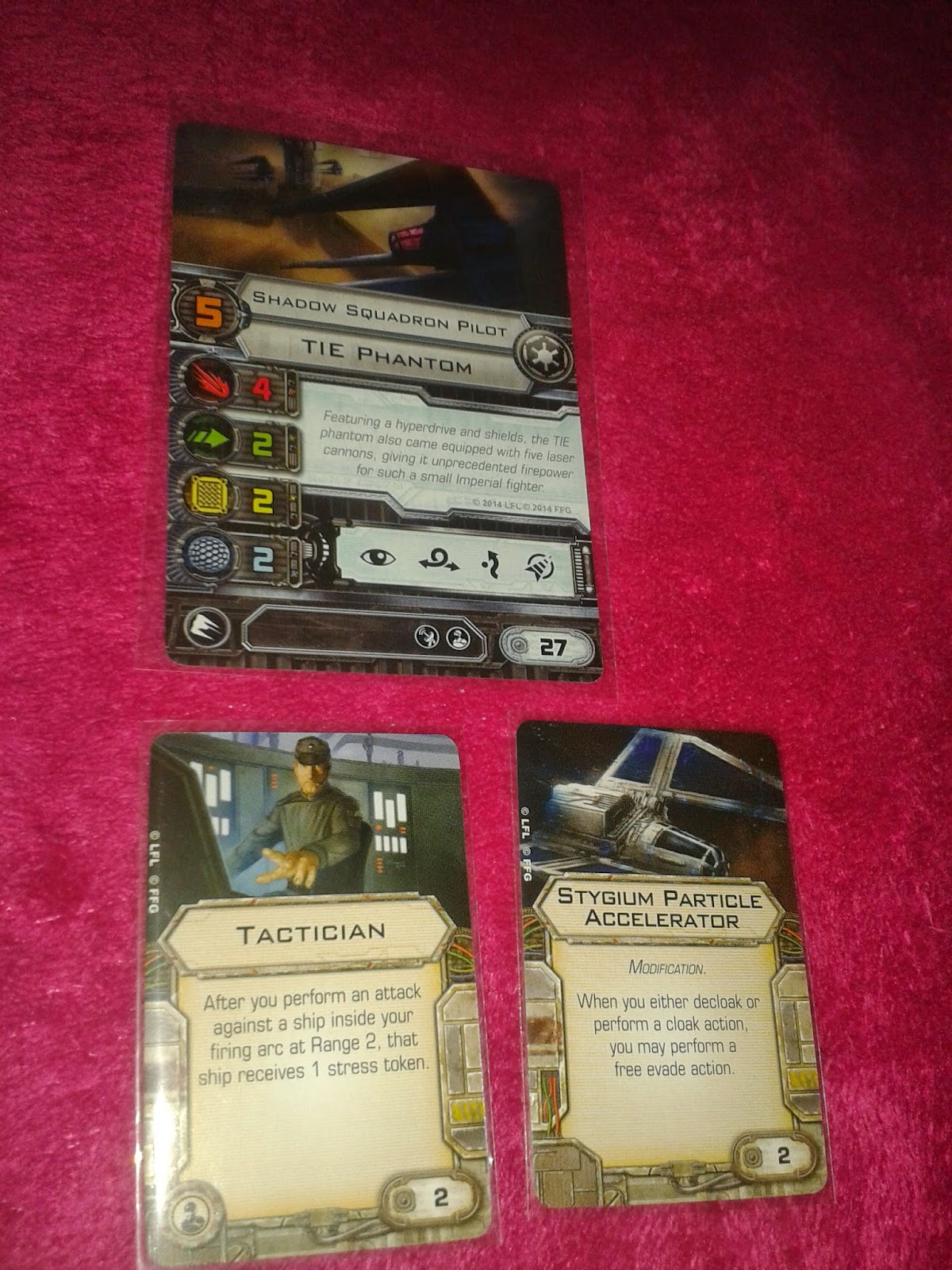 Shadow squadron pilot at pilot skill 5 and 27 points is middle of the road, he does have a systems slot and a crew slot, here I have tooled him with a particle accelerator that makes him a bit more survivable by providing a free evade move when you cloak or decloak into combat.  The tactician means you can stress out ships at range 2 which is handy to force them into green manoeuvres

Now we are onto the named pilots, this is where the Phantom becomes a beast. 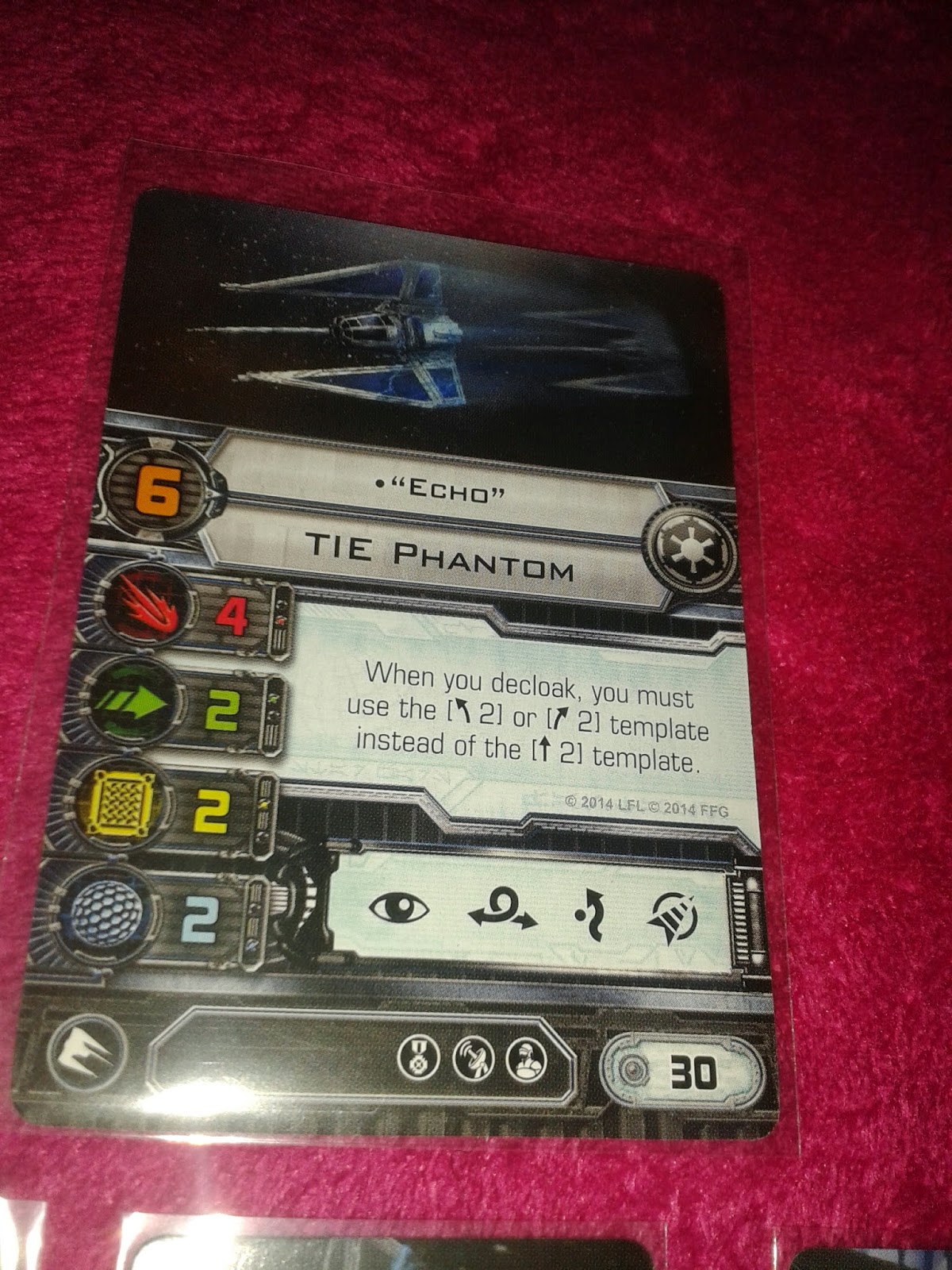 Echo, shes not cheap at 30points for a PS 6 ship bit she is so manouverable and take some upgrades to help 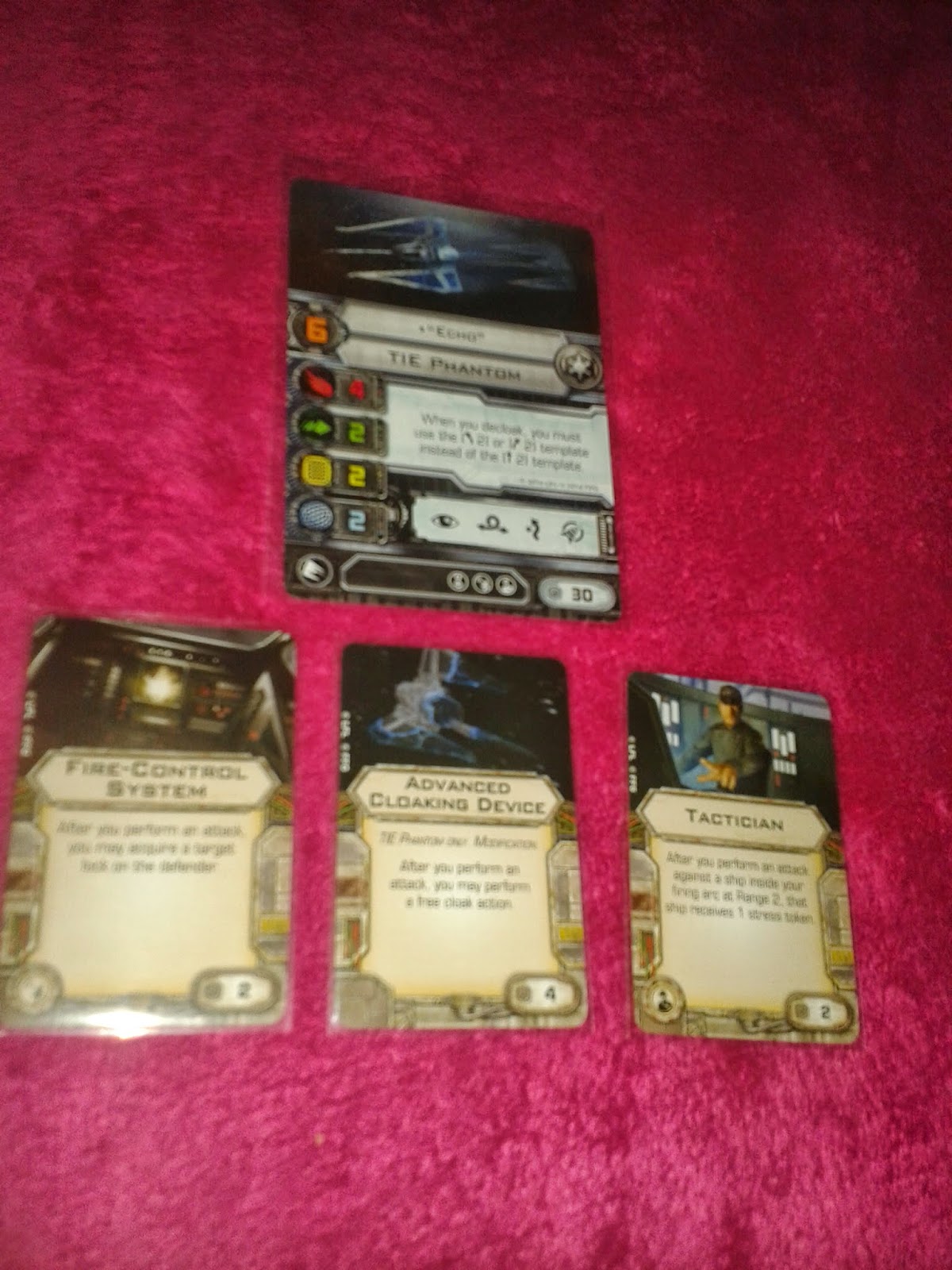 With the advanced cloaking device she can decloak,, do her decloak move, then her normal move, then when she fires, she recloaks to add protection for the rest of the round and with the fire control system adds a target lock after you fire,  allowing you to stalk your prey.

Finally we have my favourite... Whisper. 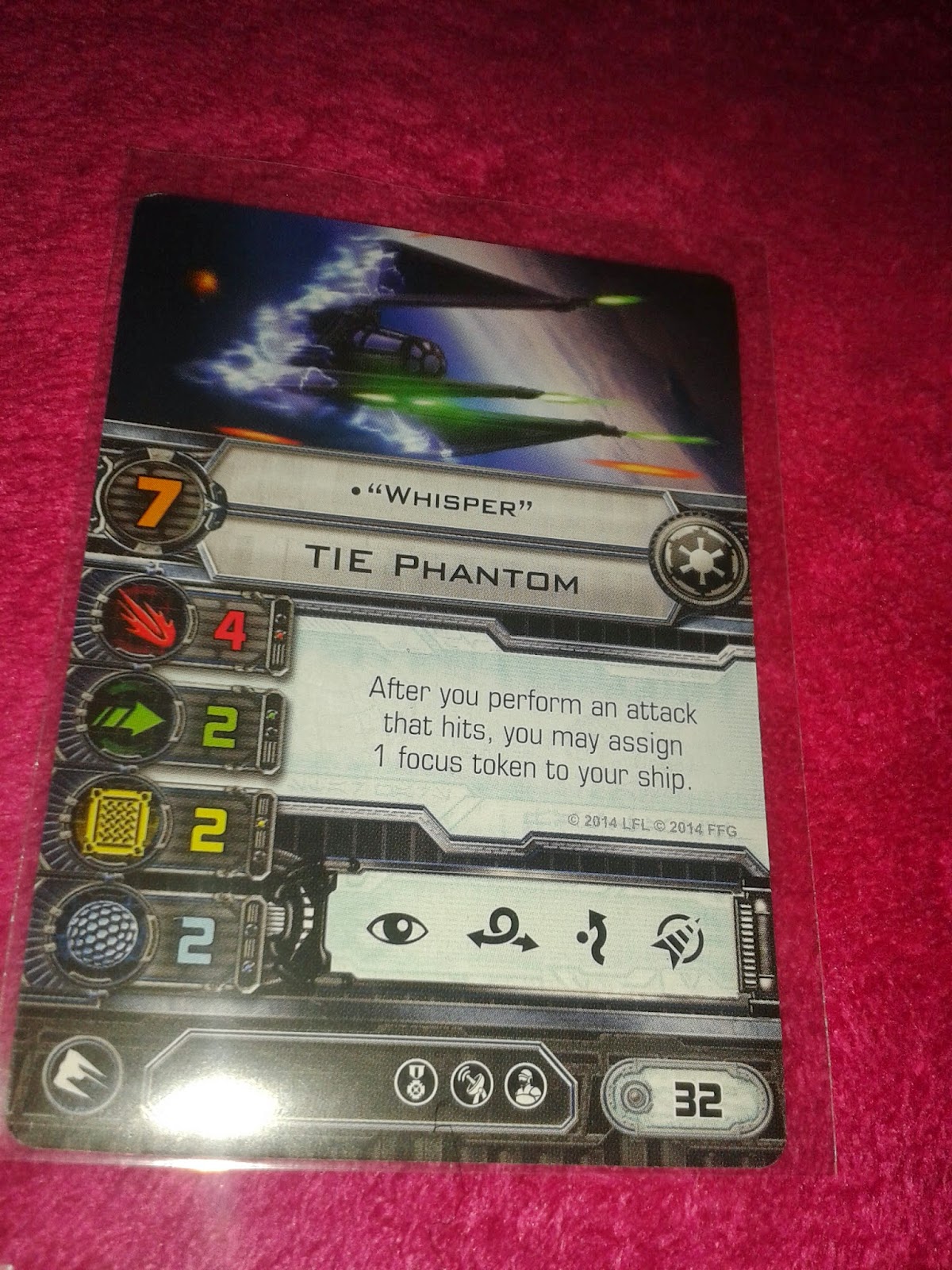 After you hit an enemy you get a focus.... handy to add to those defensive rolls, and when combined with...... 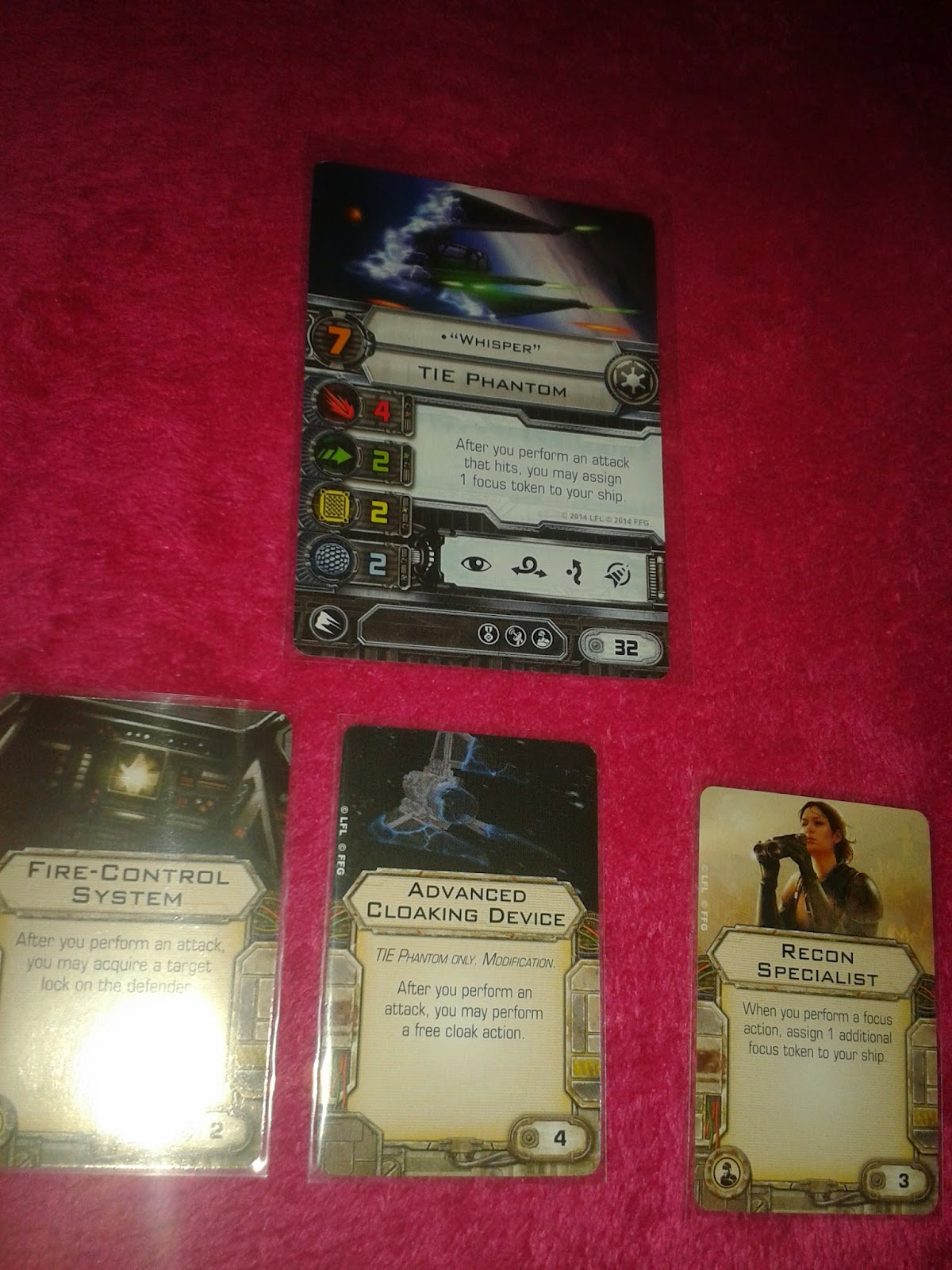 This for example..... you fire, get a focus for the return fire, and recloak with advanced cloaking device, and get a target lock as well. brutal.  Add in Veteran instincts from the starter set and she is pilot skill 9 moving last and shooting first and bossing the battlefield.  I would be tempted as well to replace recon specialist with tactician to add a stress, but then recon specialist allows to use focus as your action so you get 2 focus tokens, fire to get a third and then you can use one on offensive actions and 2 on defensive actions.  Gunner is another solid addition to the ship, it makes her pricey but she can dance around and tear things to shreds.

I am looking forward to unleashing the phantom on the table to see what she can do, you do have to think ahead with the movement before you reveal your dial but when you have that mastered any rebel ship without a turret should fear you.
Labels: Fantasy Flight Games Xwing