Asmodee Games updates the classic game Hotel, and brings it to the modern gamer in the form of Hotel Tycoon.  The idea is to buy and develop hotels and bankrupt the other players.  Last player left wins. 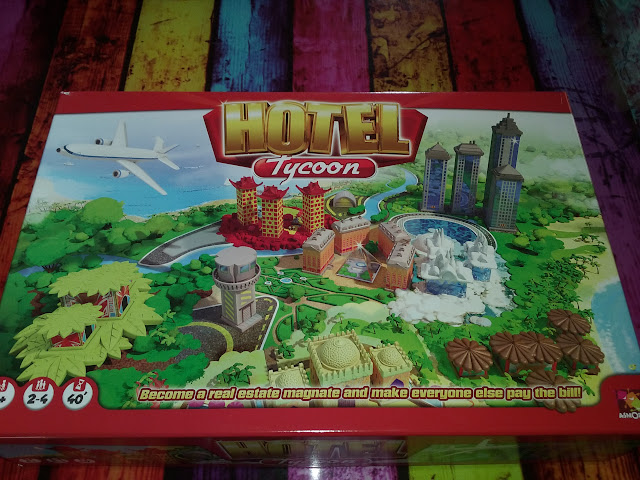 Nice bright packaging for this one, so lets take a look and see what you get inside. 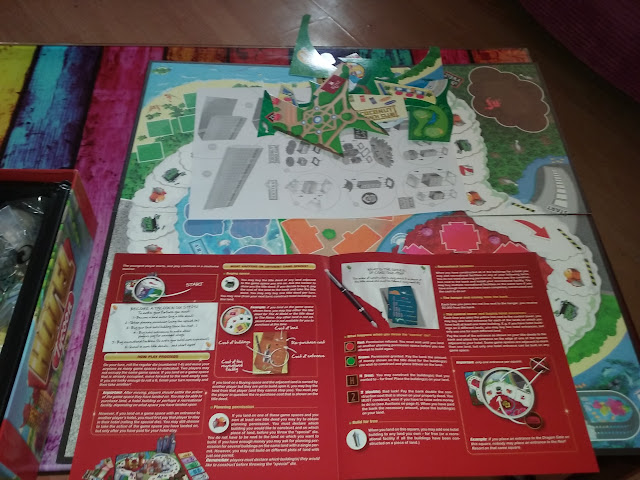 In the box you get the board, a small play sheet with rules, a guide to assembling the buildings, which is needed.  Set yourself a good 20 mins for the first building of the hotels, though once done they all fit in the box with a handy guide. and a big pile of card and plastic hotel parts.  To learn more about the rules and see it in action head over to Esdevium Games video and take a look. 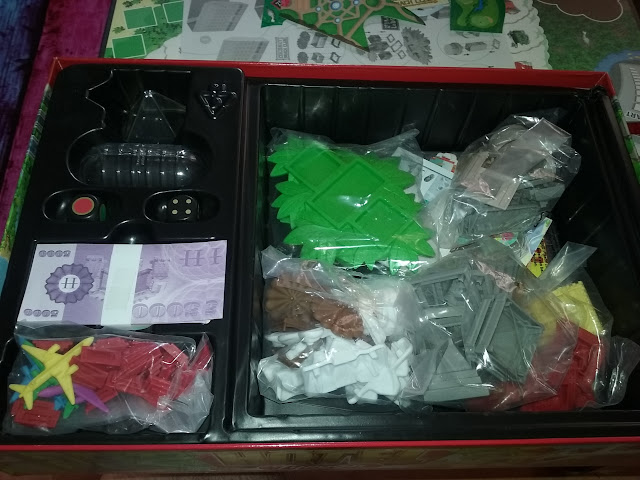 Plastic entrances, and planes which are your counters in this, money, and a wooden d6, always nice to see traditional wooden dice, and another wood dice used for when you are trying to build property. 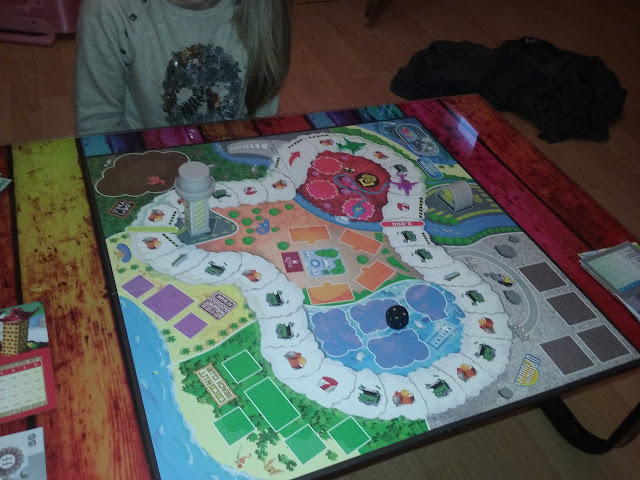 You deal out a set amount of money to each player to begin and pick your planes to go on the start icon.  Something worth mentioning is the money.  The different denominations are in different colours, which is handy if you have younger players as you can tell the amount then the colours so they can work it out. 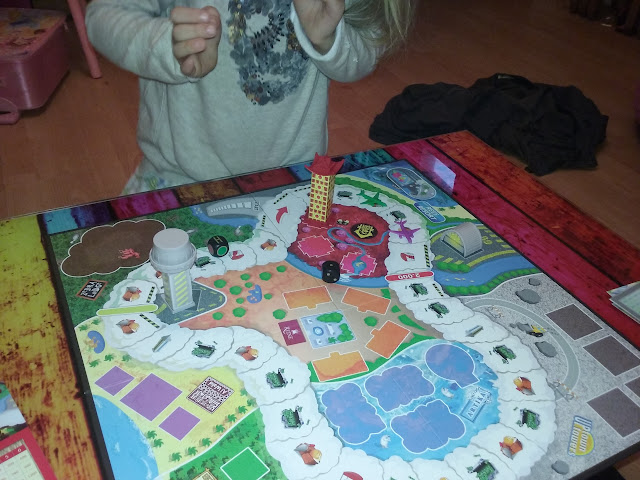 The game plays in a classic way, you roll your dice, move that many spaces, and depending on what symbol you land on you may be able to do something, such as buy the land next to you so you can begin to build hotels, or you may land on the square you need to role a dice for planning permission so you can build a building, this could end up going normal, being refused, getting it for free or even having to pay double, so there is an element of luck there.  Then you build entrances to your hotel, they go onto the main squares so people that end up on them have to pay you rent, they roll a die to see how many nights they stay, and cross reference this against how many buildings you have.  Some hotels charge more then others, but all vary in price, so its a matter of picking where you build, and how you spend your money. 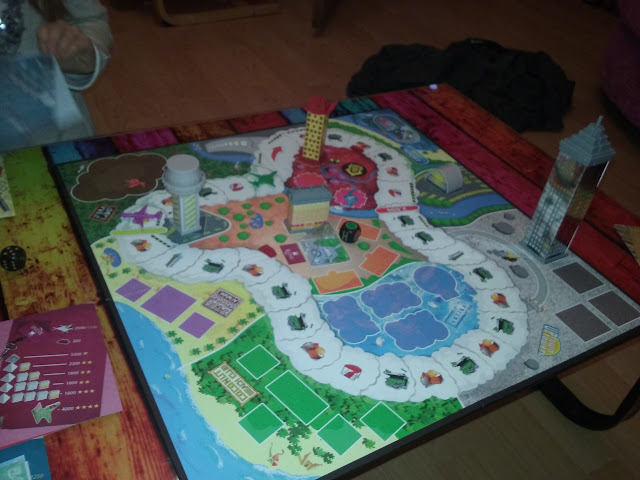 As you can see, the hotels once assembled look rather nice on the board, and add a nice 3d element to the game, if only in look.  Olivia has rolled a green, so she has planning permission for her aquarium, and builds it after paying the fee on the property card. 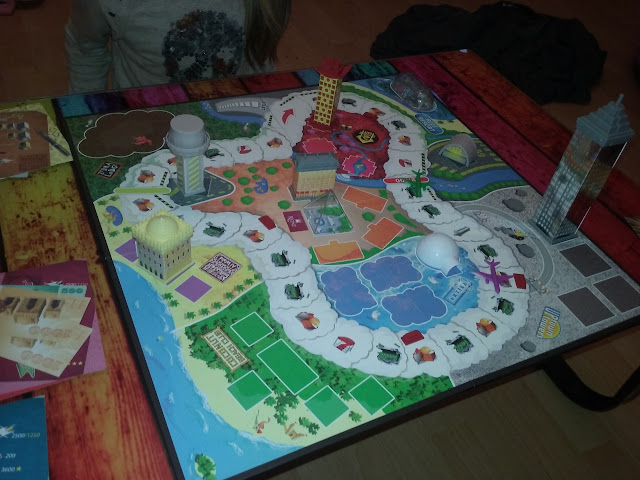 The board soon starts to build up, with both of us making claims in certain places, and saying money to develop. 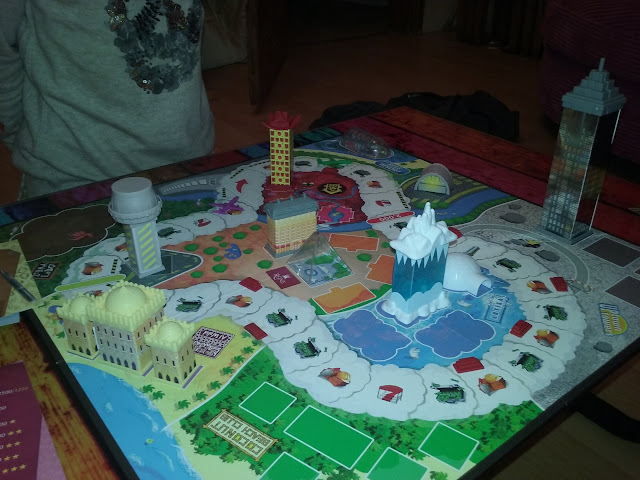 Olivia's favourite was Artica, she loved the building design there. 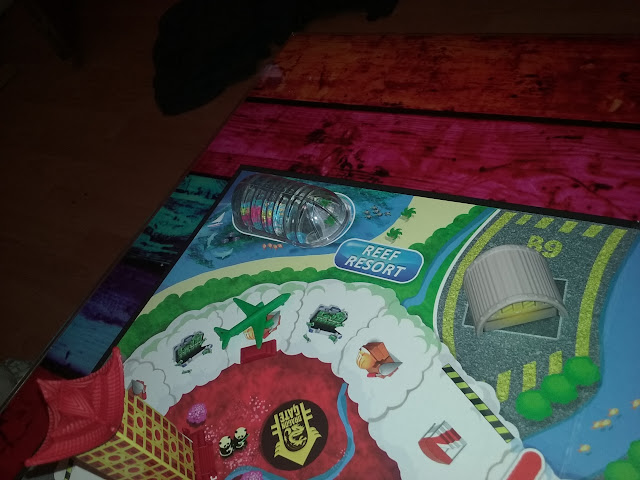 The board is nice and clearly laid out, I like the art style, simple and effective.  The game ended with Olivia bankrupting me, she is quite the financial wizard it seems, though she does revel in the fact I rolled a 6 nearly every time I stayed in any of her hotels. 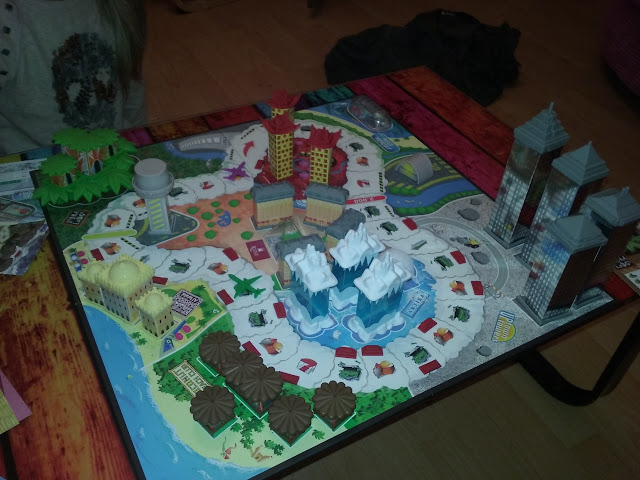 The board looks really nice with all the buildings out on it, 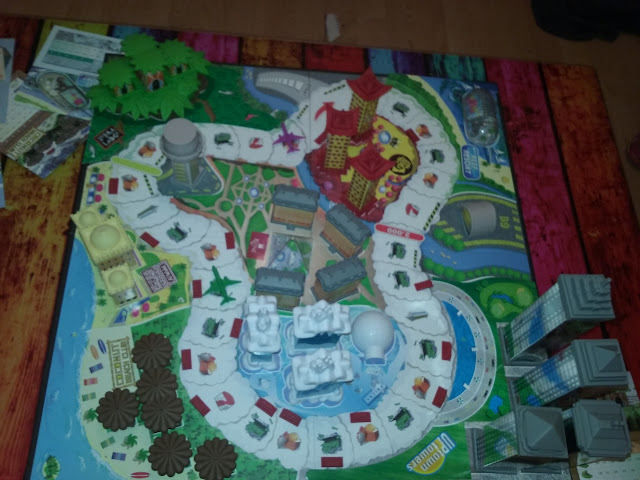 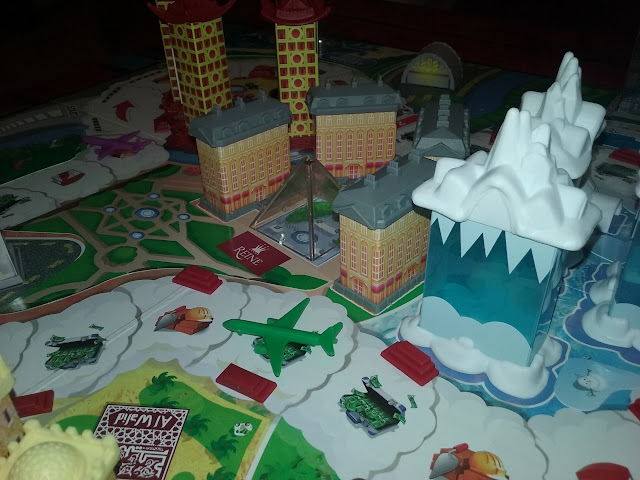 Entrances litter the path making it almost impossible to miss as you go through.. 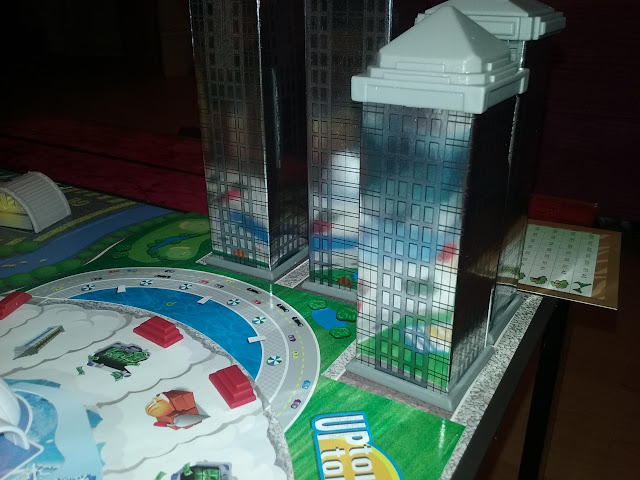 This may not appeal to more hardcore gamers, but I had good fun with it, looking at it for what it is, a classic styled family game, the kind of thing I pulled out 25-20 years ago with the family.  It still works just fine, yes there is a luck element to it, but if you have played Monopoly, (who hasn't) you will find this has more choices then it, so I think it is certainly the superior option.  If you want something light and fun where you don't have to plot tactics and strange combos many moves ahead, give it a shot, its a good game to break out with the family, and it passes the Olivia test as she has asked for multiple games to continue to build her hotel empire, and sometimes there is something to be said for just throwing the dice and riding the luck in that classic fashion. Its great for nostalgia, as any gamers of my age have good memories of playing this when we where young as I did.
The Game has an RRP of £24.99 you get it in your local Waterstones, or online at Amazon here
Labels: asmodee games family games review