Today we look at something a little different from normal.  The Smart Egg Labyrinth Puzzle.  Its not gamer related, but we all need to keep our tactical minds nice and sharp.  Today we look at some of the starter range, the 1 layer eggs.  In the future 2 and even 3 layers are planned.  This relates to the internal layers needed to navigate to succeed in the puzzle.  I was brought up in the era where the king of puzzles was the Rubiks cube, and yes I never completed it, never had the patience or desire to spend time on it when I could be building Airfix.  These are a different and fresh approach to the logic puzzle idea. 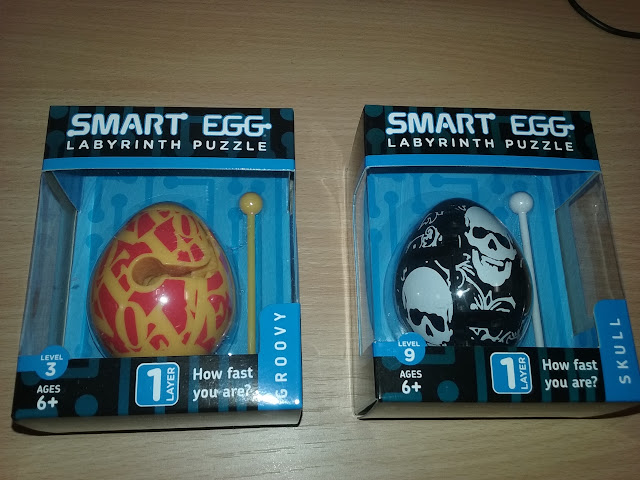 We have the level 3 (the levels indicate relative difficulty) Groovy egg, and the level 9 Skull egg. 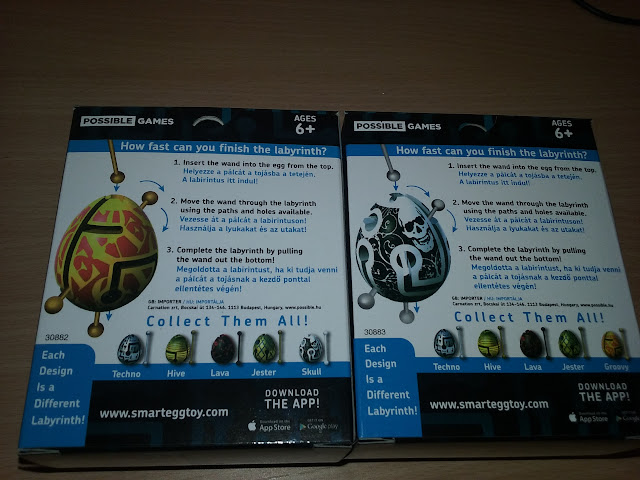 All the instructions you need are on the back, you insert the wand in the top and need to maneuverer it to navigate the labyrinth within the egg.  Lets see what's in the box and how we got on..... 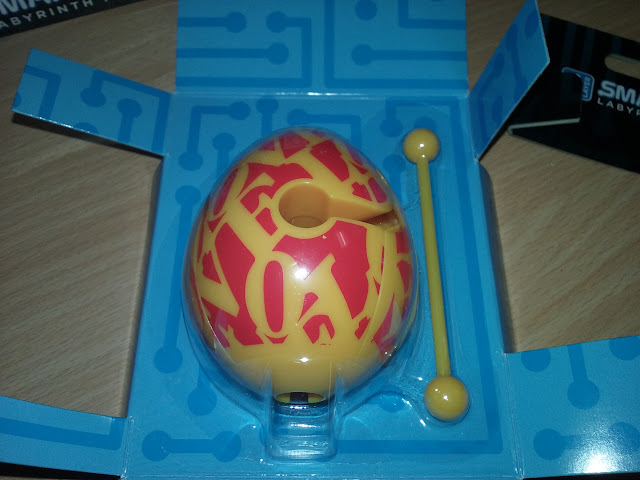 Well its just the egg and the wand in the box, so once its out and you have read the instructions once on the back you do not need the box anymore, in fact Olivia used it without the instructions just me explaining to her and she was away. 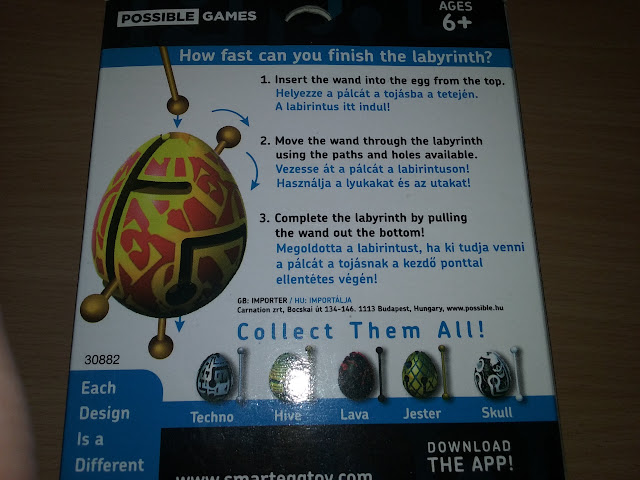 It shows on the back that are several different versions, all with a different puzzle, and art on them meaning if you enjoy them there is scope for collection and variety as well, especially with plenty more planned. 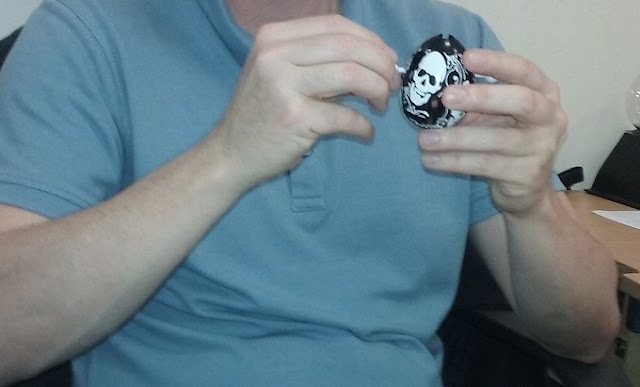 I took these into work to look for willing volunteers, on break time of course, and they caused a stir in the office, everyone wanted a go at them, and once they had been figured out it was talk about who could do it the fastest, so they where certainly a hit.  Its not as easy as you initially think, sometimes you have to slide the wand through the other side, rotate it inside, move it internally before sliding it around. 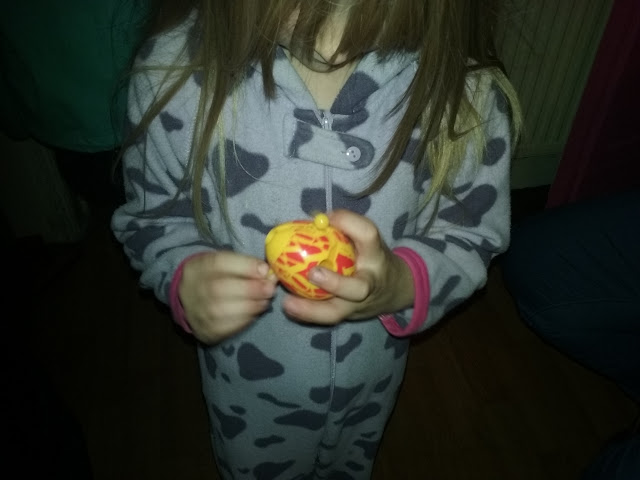 The first couple of goes at work where slow, as we over thought it, trying to work it out in looking at the slots outside, but once we had the feel we where away.  Olivia on the other hand had so such conceptions, and just went for it and got it on her first try, though it took a couple of minutes.  The age 6+ on the box I can not argue with as Olivia is 6 and did complete both of them, she liked it and has claimed them as hers now and sits messing with them whilst the TV is on not even looking at the eggs, doing it through feel, not getting frustrated through it she showed more patience then I thought a 6 year old would with it, that may be her, or more the layout the Smart  Egg, I feel its the latter. 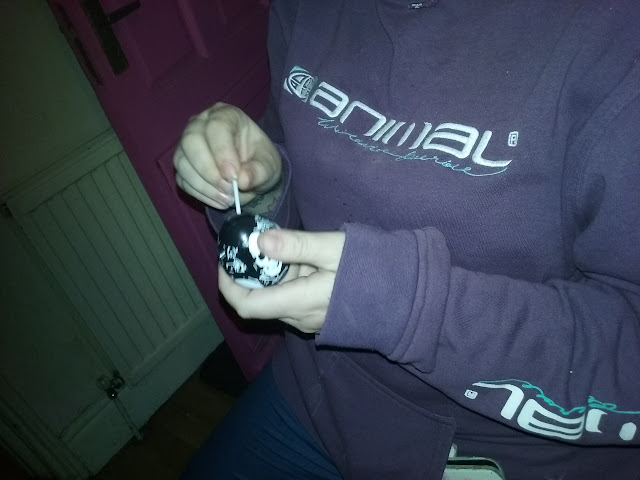 Even the wife got involved, and was pleased with herself when she completed it. 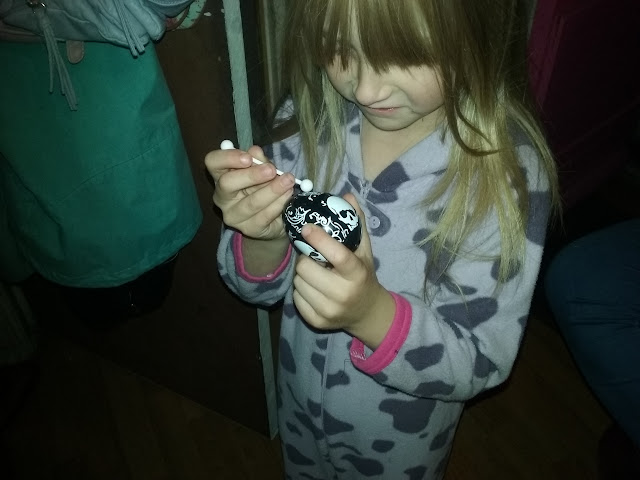 Olivia completed both eggs,  not in the fastest time at first, but she is doing it quicker each time, which leads to one of the fun uses for it.  Time Trials.  Set your phones timer up, and go, challenge your friends, or colleagues and family, its quite fun, and the timer element leads to a nice bit of competition and pressure as well.

The fastest time we got with the groovy egg was 3.4 seconds. and the fastest from the Skull egg was about 9 seconds.

There is also mention of a game app on the back for Smart Egg, I have only tried it on Android, its free, and a similar style puzzle game that's worth a look

Overall these are quiet fun, though quick to complete, but that would be down to the level of them, they are things you can go back to though, try different methods, eyes closed, work from the bottom of the egg to the top instead of the top down,  have one at your desk at work, read and email whilst doing it, it can be quite soothing and rhythmic once you have the route locked into memory.

The RRP for them is £5.99 they available at your local Waterstones, and will make a great stocking filler or secret santa present to your work friends, as you can use it too then, and if they like them there is a whole range of different ones with different looks and a different puzzle in each, plays the harder ones coming soon as well.
Labels: family games