The IRW Terix was a Romulan D'deridex-class warbird that was in service with the Romulan military in the late 24th century. Commanded by Commander Sirol, the Terix discovered a hull fragment from the Starfleet testbed vessel USS Pegasus in the Devolin system in 2370. The warbird was subsequently ordered to find the rest of the ship. When the USS Enterprise-D arrived with the same mission, Sirol claimed that the Terix was investigating gaseous anomalies.
After the Enterprise-D entered asteroid gamma 601 to salvage the Pegasus, the Terix "accidentally" sealed the starship inside during some "geological experiments." The Terix offered to transport the crew of the Enterprise-D out, but the starship escaped on its own using the Pegasus's phasing cloaking device. (TNG: "The Pegasus")
The Terix was Tomalak's flagship during a face-off in the Romulan Neutral Zone in an alternate 2370. (TNG: "All Good Things...") ﻿ 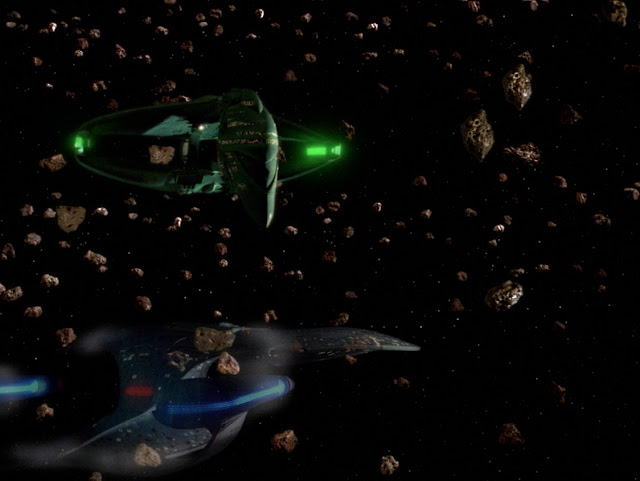 The Terix is a prize ship, so not available in retail format, so she is not easy to get hold of.  lets take a look and see if she is worth it. 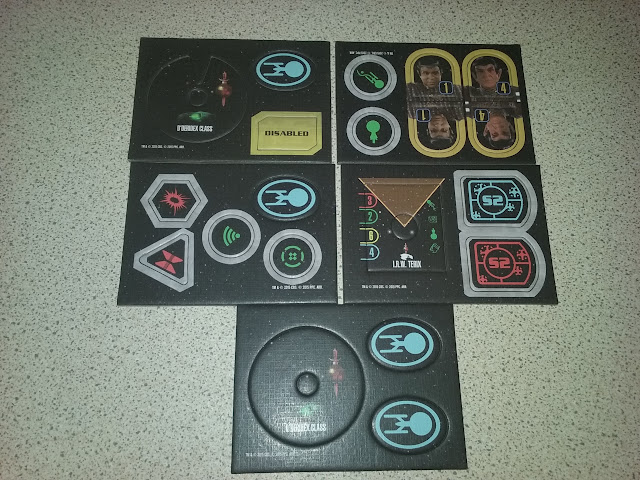 Firstly a slab of tokens as always, you may notice it does not have the Romulan Faction logo on the dial, and a different coloured base as well. 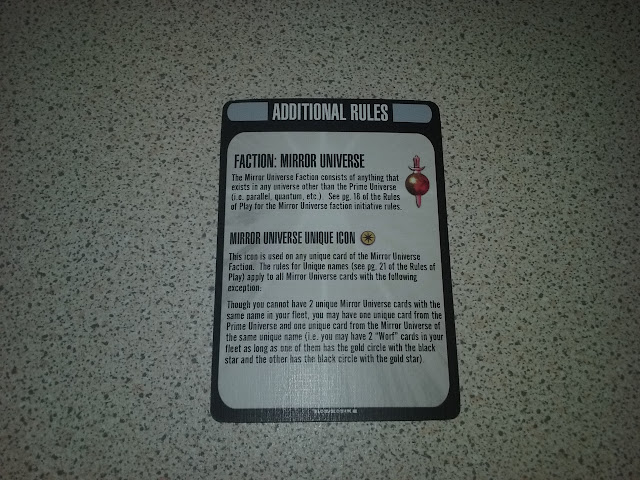 That is because it is not under the Romulan faction, but Mirror Faction, as it was seen in the Next Generation episode All good things.    We get the additional rules for the Mirror faction for the unique icon.  This is different to the regular factions unique item, meaning you can have a regular universe and a mirror universe character of the same name on the same side, or potentially the same ship. 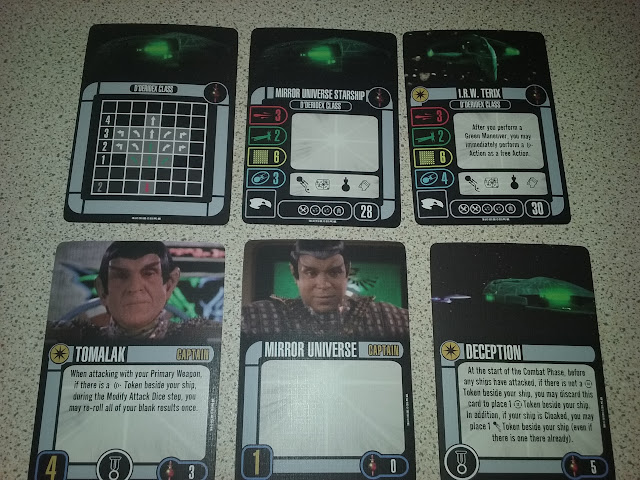 The ship manoeuvres  like the regular D'deridex class.  You get the generic ship, and the named Terix.  She has the same stats as a normal D'deridex.  Her named ability allows you take a free scan action after you have done a green move, which is great as the scan action is not on the action bar of the ship, so it lets you get that extra ability to strip a defence dice from your target.  Tomalek is the captain, and works in great synergy with the ship.  If you have a scan token by the ship when you attack, which you can get from the ships ability, he allows you to re-roll all your blank results, giving you a basic free target lock.  The elite talent is Deception, you can discard it at the start of the combat phase to gain a battlestations token, and an evade if you are cloaked, combined with Tomaleks ability and the scan token you can caus e a lot of hurt if this card is played at close range at the right time. 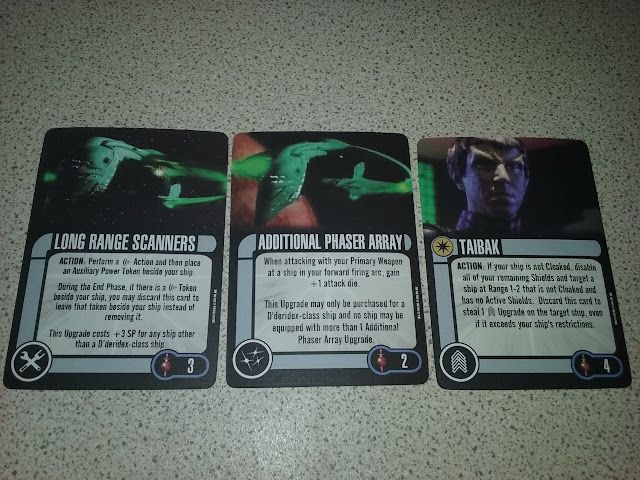 For tech we have long range scanners, for an action you get a scan, which the ship can not normally do at the cost of an auxiliary token.  Additional Phaser Array for 2 points is a bargain, as it adds a much needed punch to the ship by adding a plus 1 to your primary weapon.  Taibak adds a useful crewman that can steal opponents crew to your own ship. 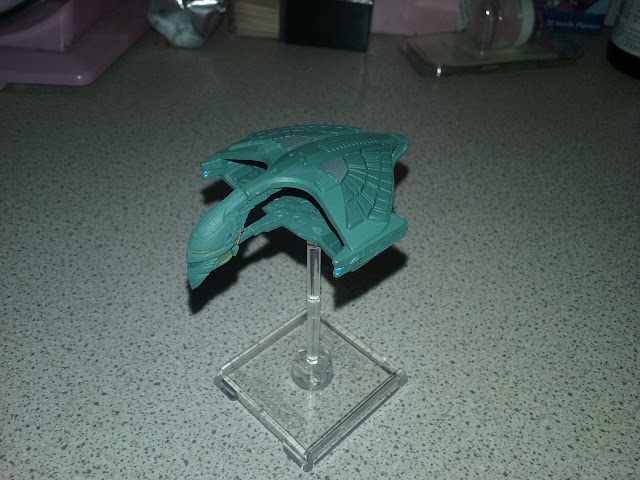 It is the same model we have seen several times now, but it is still a great looking ship. 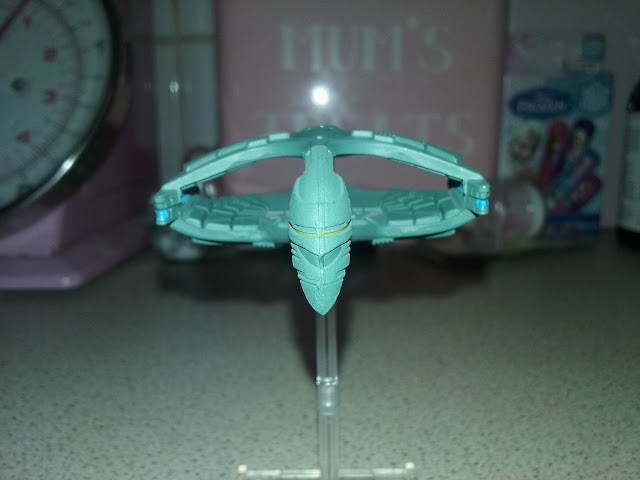 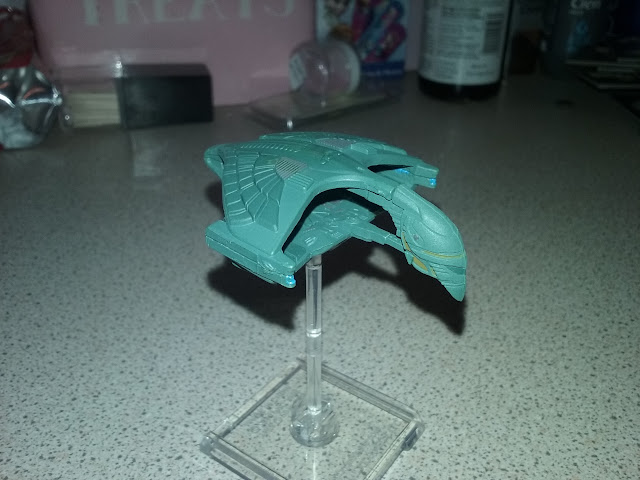 Worth picking up if you can as it adds punch to Mirror, but would have been a MUST HAVE if this had been a Romulan ship.
Labels: Attack Wing Star Trek unboxing