Today we look at Timeline Historical Events from Asmodee games.  Its a card game with 110 cards  for 2-8 players. 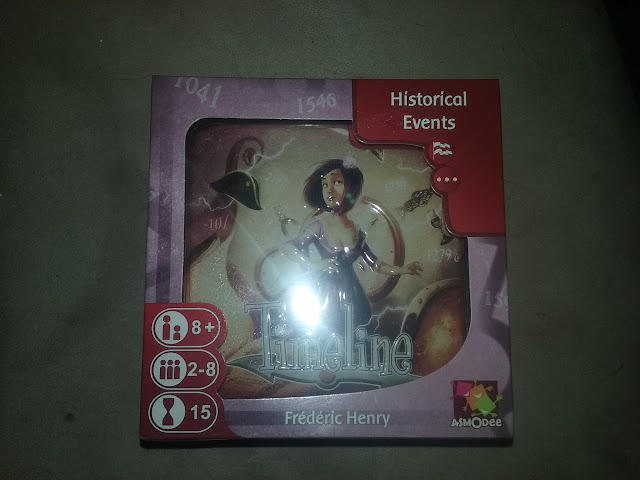 It comes in a nice box that clearly has the age ranges, amount of players and game time on it. 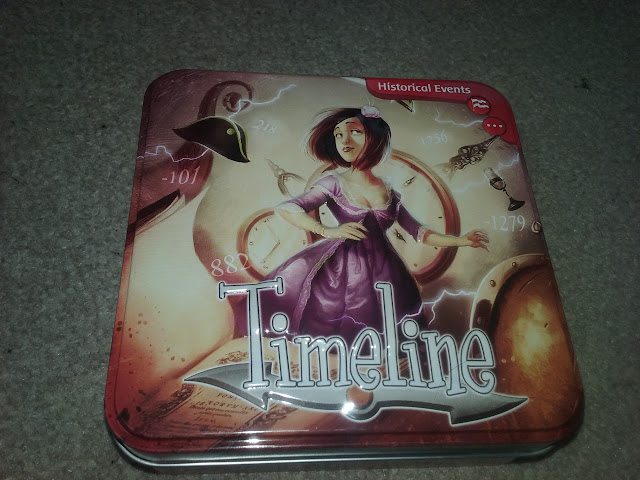 Inside the card packaging is a lovely metal tin, with some nice raised work on it for a 3D style cover 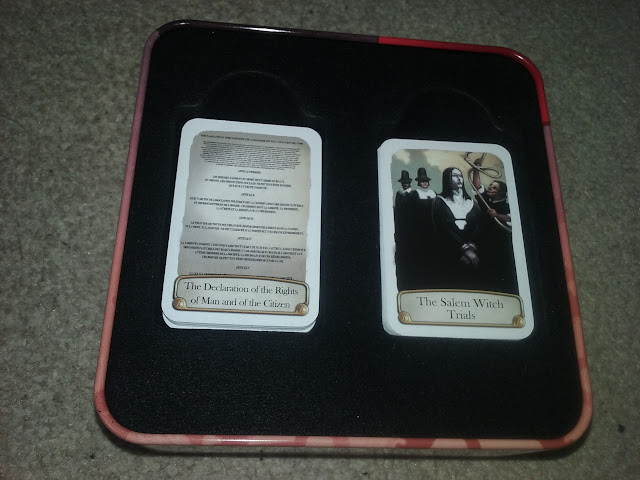 Inside the box you will find 110 cards nicely packed so its a game that you can store easily, and has inbuilt box control, always a bonus. 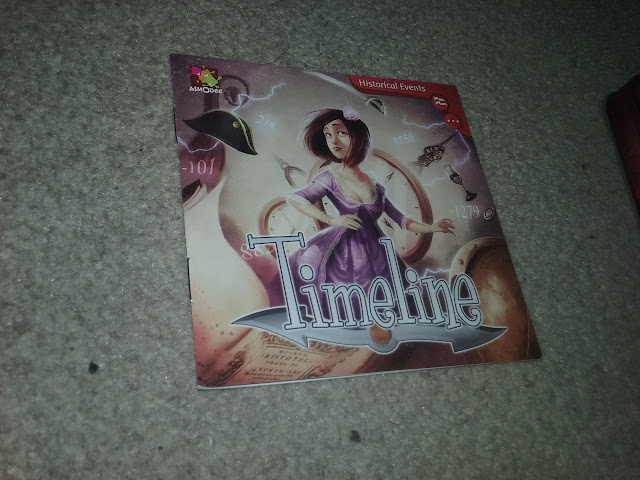 You also get a tiny rulebook.  The game does not have many rules so you don't really need anything more than it. 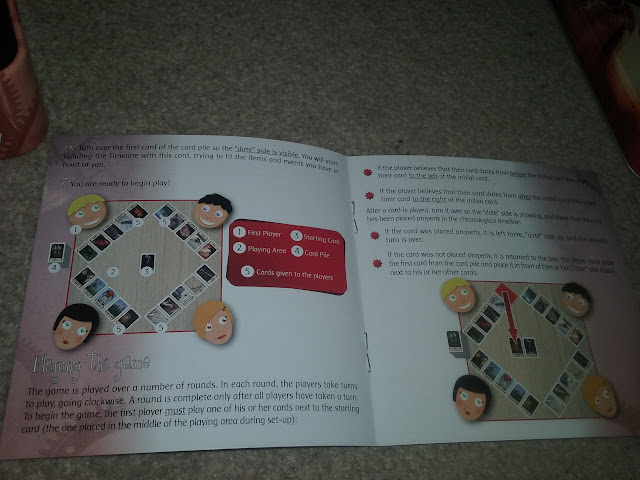 It contains the rules, has some nice simple diagrams showing you how it works as well, though after one read through of a couple of minutes you can be playing with people who haven't played before in a few minutes its that's simple. 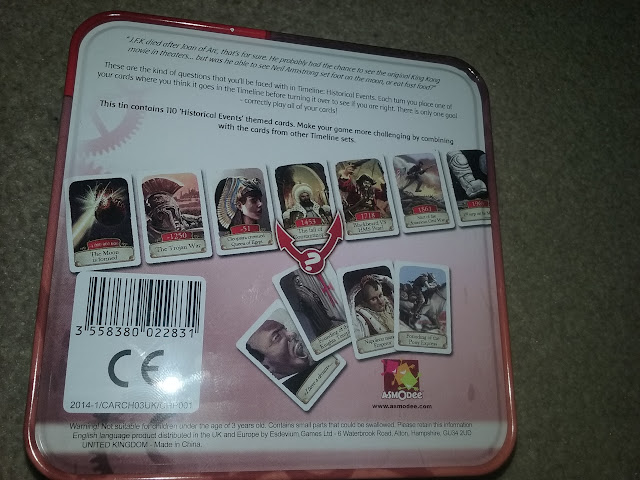 The back of the metal box shows some of the cards, and gives you a great overview of the game and what it is about, since the main packaging is transparent you can read this off the shelf and decide if its for you or not.

Lets take a deeper look at the cards, how it plays, and who may enjoy it.....

The Cards themselves are the "mini" type becoming more common  these days, they need to be though to fit the size of the game.  The card quality is good, they do not feel cheap and nasty, and they have some fantastic themed artwork on them 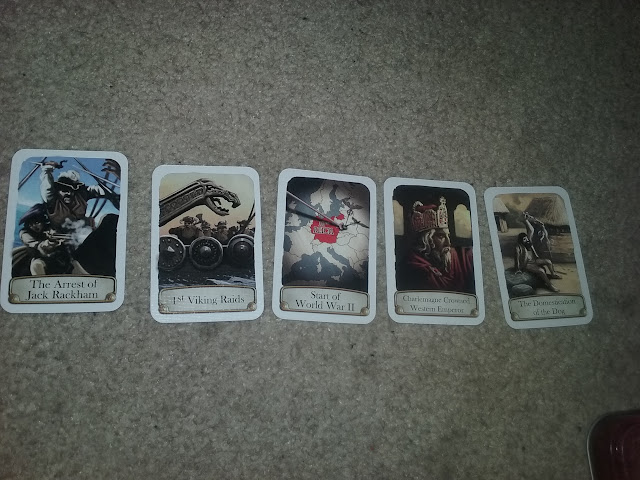 On one side of the cards you have the historical event itself. 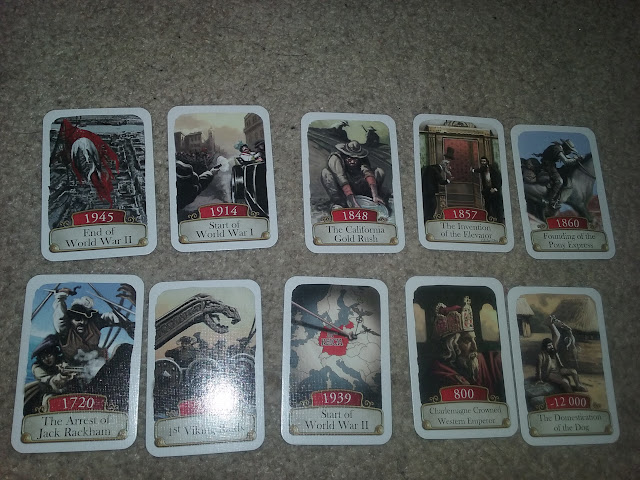 On the reverse of the card you have the date the event happened, and the same artwork is on both sides.

Now down to how it plays, the recommended number of starting cards is 4 per player, which does not sound like much, but if you have 4 players that's 16 cards in your timeline overall.  The rules suggest you can increase the number of cards depending on players, so for a two player game you may want 10 each, or whatever you may prefer.  The idea is to get rid of all your cards, the first player to do so wins. 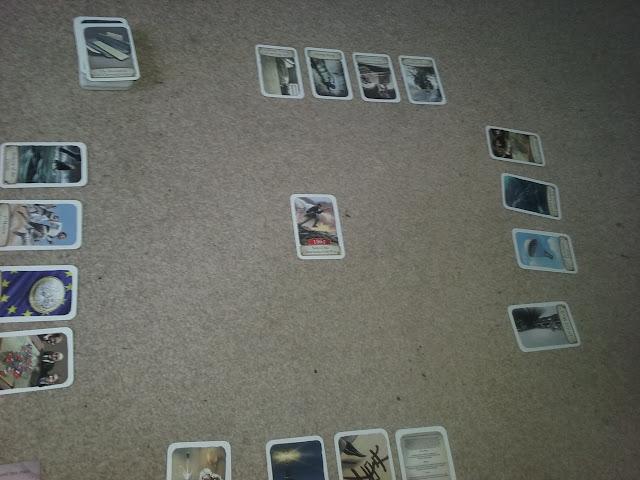 Here's what a four player game set up looks like.  All the cards are shuffled and dealt to the players date side down.  The deck is then put to one side, and the top card is flipped over to show the date and placed in the centre.  Then the first player starts.  You pick one of your cards, and place it still date side down where you think it happened.  Did it happen before or after the main card.  Once you have placed it where you think it goes, you flip it over to show the date.  If it is correctly placed play moves on to the next player.  If the dates are wrong and not the correct order, then you discard that card and draw another from the deck.  Play continues with all players doing this until they run out of cards. 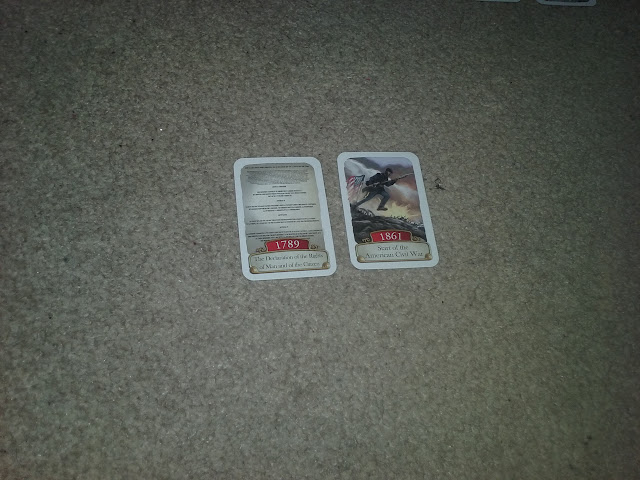 Here I placed my card correctly, knowing it happened before the American civil war. 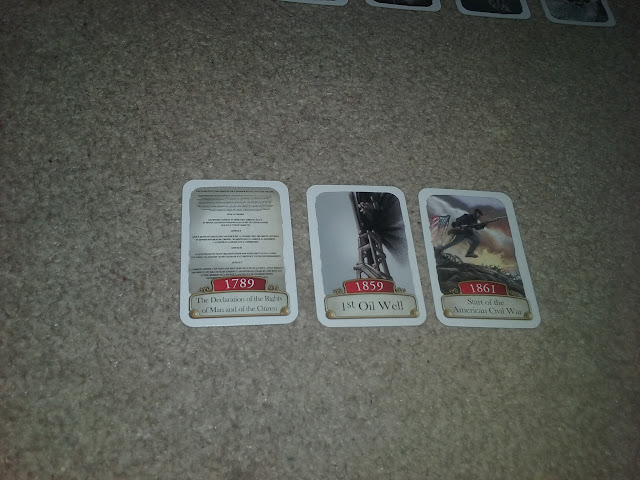 The next player placed the first oil well card, guessing it happened in between the two events shown. 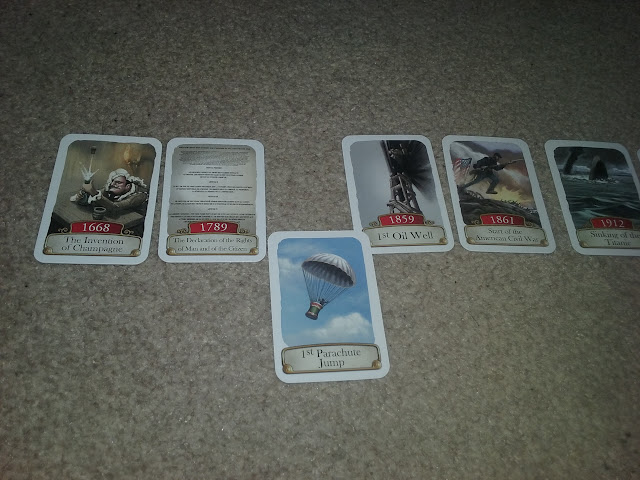 After a few rounds the timeline grows, making guesses a bit more tricky.  A player has placed his first parachute jump card here thinking it goes between 1789 and 1859. Is he correct? 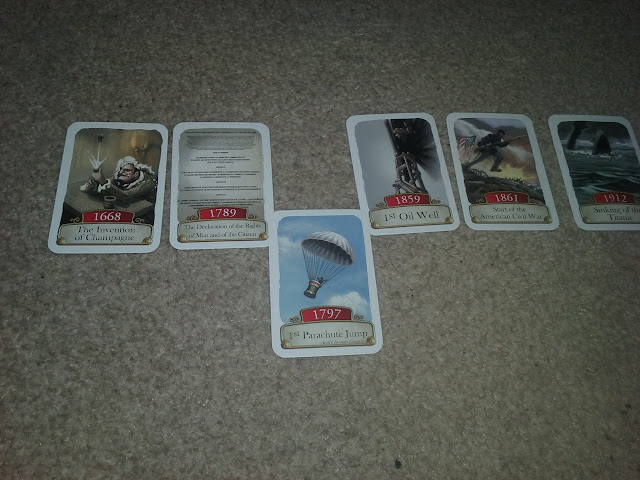 You flip the card over, and yes, hes right! so it slides into the timeline there. 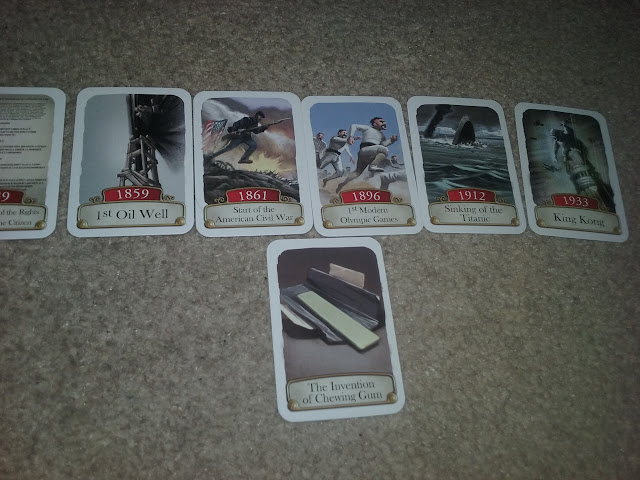 As more events come out and the time gaps get smaller, guessing gets less effective, so you really need to think about it,  A player here has put the invention of chewing gum sometime between the start of the American civil war 1861 and the first modern Olympic games in 1896.  When its flipped over its correct so slots in and the time line moves, but f they where wrong, it goes to the discard pile and another card is drawn, so think carefully! 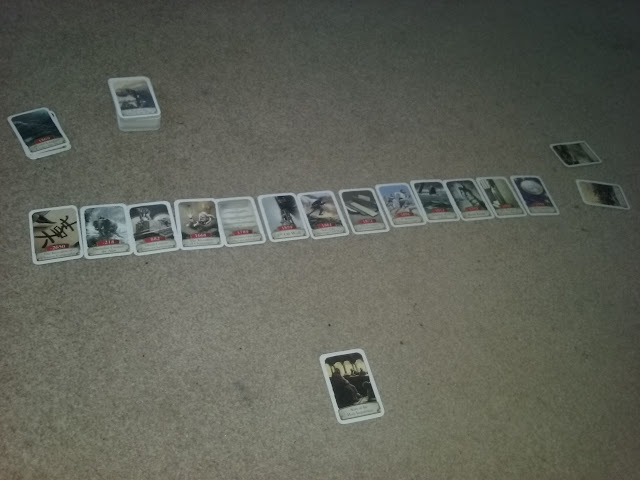 Here is the finished timeline, player 3 has won, as all the other players have cards left from some bad guessing.

So that's the game, its really that simple in theory.  Though in practice the guesses can get a bit tricky, which makes it fun.  There is such a wide variety of events, from the domestication of the dog, to the first landing on the moon, so there are going to be cards you know, and cards that make you think "oh I am not sure, maybe here" you may be lucky, or you may be  wrong and draw another card.

Its elegantly simple in tis execution, proving you do not need pages of rules for a fun game.

It recommends from ages 8 up on the box, and I do think I agree, Olivia is 6, so this game is a bit of a challenge for her, as History has not been taught to her yet, so its probably best to judge it against your children if they are going to play.  The game can be an excellent learning device though, and when she gets a little older and starts studying History more, this is going to be a great and fun learning aid, putting things in order visually will really help her picture things in history, and the art is so good it gives a sense of the event.

Its a great quick fun game for adults, the box states about 15 minutes for games, which is about right, though the games I have played I  found to be about 10 minutes, so its fast and does not outstay its welcome.  Its a good "filler" game, a great party game as you can play a few quick ones then move onto something else and come back to it with ease as there is so little to teach.

The concern I had with it, was that once you knew the cards replay ability would drop drastically.  However there are several other Timeline sets that follow the same format, Inventions, Music & Cinema, Science & Discoveries and General Interest.  These sets can be mixed in to add huge variety to the game and many more challenges, increasing its replay value massively, and its educational value for all involved.

All in all a great little game, that can be picked up for RRP £12.99 so it wont break the bank and is available in your local Waterstones..  If you can not find it there try your local game stores here.  You can also head to  Amazon to purchase it now and have it sent straight to your door.

It makes a good addition to the collection as it can be used as a learning device, general game or party game.  Any history lover like me will be thrilled with it.