Skip to main content
Labels
Posted by Unknown May 29, 2015

Today we look at the USS Enterprise, the constitution refit class.  System upgrades with new technologies after long deployments were far from unusual in her history, but the Enterprise's overhaul of the early 2270s became a nearly keel-up redesign and reconstruction project.
The very heart of the ship was replaced with a radically different vertical warp core assembly, linked to new, and heavier, warp engine nacelles atop swept-back pylons and integrated with the impulse engines. The new drive system allowed for an expanded cargo hold in the secondary hull, linked to the shuttlebay.
Weapons system upgrades included nine dual-phaser banks with power channeled directly from the warp engines. A double photon torpedo/probe launcher was installed atop the secondary hull.
Multiple egress points now included a port-side spacedock hatch, dual ventral space walk bays, four dorsal service hatches, and a standardized docking ring port aft of the bridge on the primary hull; four more docking ring ports, paired on the port and starboard sides of the launcher and secondary hulls respectively, and service hatch airlocks on the port and starboard sides of the hangar bay's main clam-shell doors. 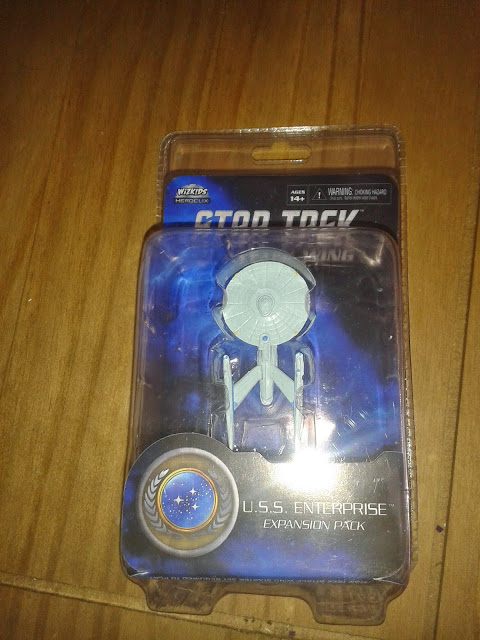 A new bridge module reflected the modern computer systems, operating interfaces, and ergonomics that ran throughout the ship.
Following Kirk's promotion to rear admiral and posting as Chief of Starfleet Operations, his hand-picked successor, Captain Willard Decker oversaw the refit, assisted by Chief engineer Commander Montgomery Scott.
After two-and-a-half years in spacedock for refit, the Enterprise was pressed into service, weeks ahead of schedule, in response to the V'ger crisis, once again under Kirk's command.

Decker was temporarily demoted to commander and........

posted as executive officer because of his familiarity with the new design. Incomplete systems had to be serviced during her shakedown cruise en route to V'ger, including the first test of the new warp engines.
A matter/antimatter intermix malfunction ruptured the warp field and led to the Enterprise's entry into an unstable wormhole. Commander Decker belayed an order from Admiral Kirk to destroy an asteroid in their path, which had been dragged into the ruptured warp field along with them, with phasers. The refitted phasers now channeled power directly from the main engines at a point beyond the dilithium/magnatomic-initiator stage. Because of this, the intermix malfunction, and the antimatter imbalance within the warp nacelles that had resulted, caused automatic cutoff of the phasers, a design change of which Kirk had not been aware. Decker ordered the use of photon torpedoes instead; as a backup, they had been designed to draw power from a separate system in case of a major phaser loss. The timely arrival of Commander Spock brought correction to the intermix problem.
Once the V'ger threat was averted, Captain Decker was listed as "missing in action" and the Enterprise remained under Admiral Kirk's command for an interim period. At some point, Kirk passed command on to Captain Spock.

So what do you get in this pack then? 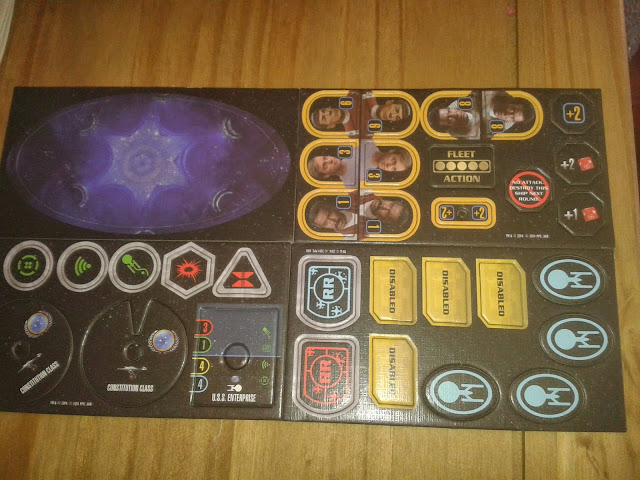 A big chunk of card in this pack, including a token for the mission, a large V'ger token, and plenty of other card based goodie. 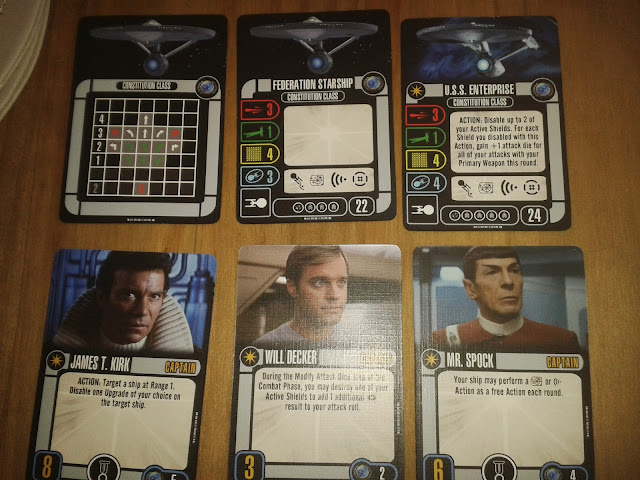 The ships fairly nimble, and does have a slightly different dial to the original constitution class.  You get a generic constitution class refit card, and the named enterprise.  Its action allows you to power up your primary attack.  For captains we have Kirk, he can disable upgrade at range 1, handy, but not my favourite one in this pack.  Will Decker allows you to add more power at the cost of a destroyed shield, so combined with the named ship can really pump out some firepower.  My favourite captain of the pack is Mr Spock, he gives a scan or target lock as a free action, as well as having a solid captain skill and an elite talent. 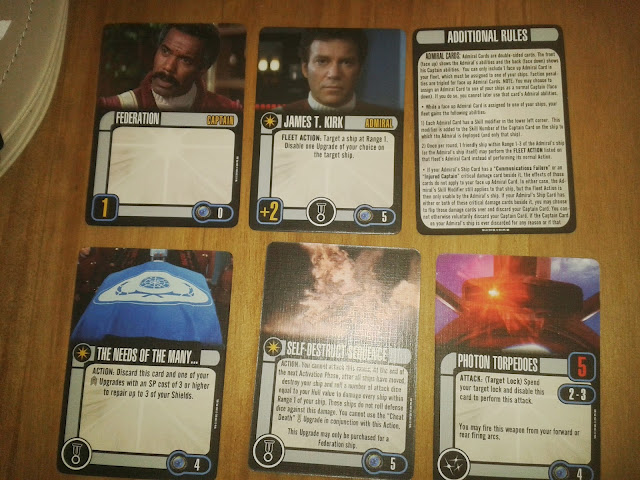 We also get our generic captain as well, and as you can see the admiral Kirk card with the additional admiral rules.  We get two elite talents, self destruct which can be deadly if used right, and the needs of the many which discards a crew man to gain 3 shields back, its useful but costly, but could just save you in battle.  The one weapon upgrade we get is photon torpedoes. 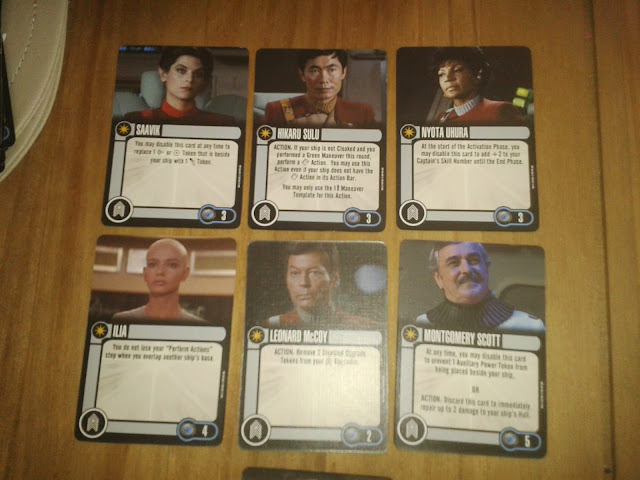 We get a ton of crew in this pack, Saavik who lets you sap a scan or battlestations for an evade.  She works well with spocks free scan.  Sulu allows you to perform a sensor echo when you are not cloaked.  Uhura gives you a captain skill boost.  Ilia allows you to still perform actions if you overlap which is quite handy.  McCoy can help get your disabled crew back on line, and Scotty lets you ignore an aux power for a disable, or discard him to repair. 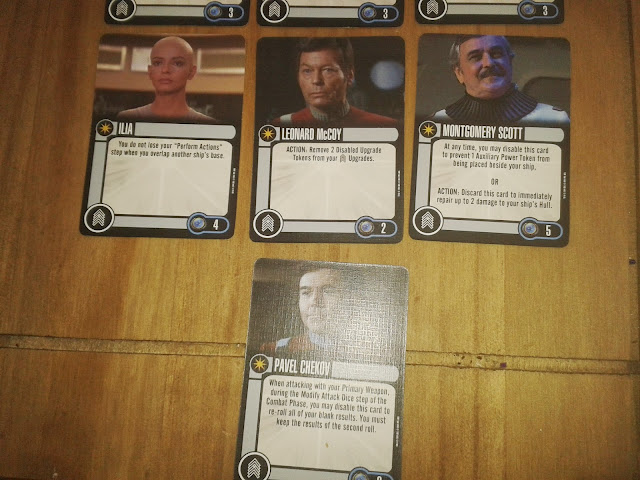 Lastly we have Chekov who lets you reroll your attack dice.  There are plenty of solid choices here 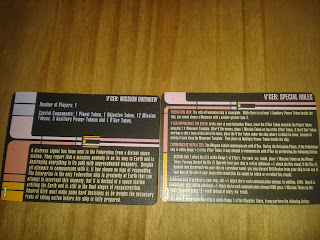 The mission focuses on the original Star Trek the Motion Picture plot, you have to communicate with V'ger, which you get in token form.  The mission is solo play or 2 player cooperative, so im really looking forward to playing it.

Now onto the ship, unfortunately its not one of the best paint jobs, but it is a great looking ship 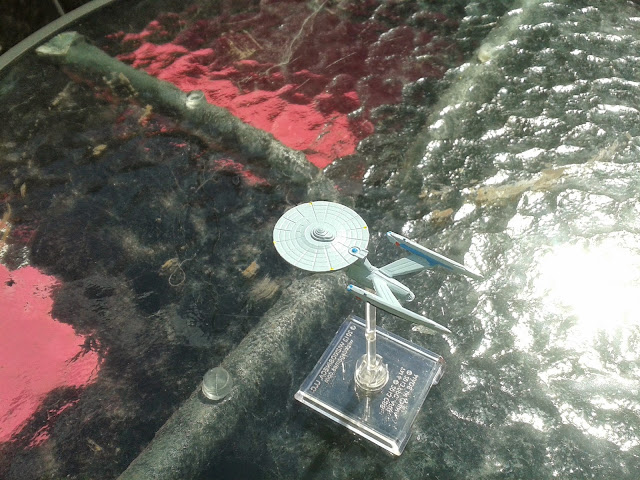 It has those great classic lines, and detail, so a wash and repaint would bring it up to a lovely standard. 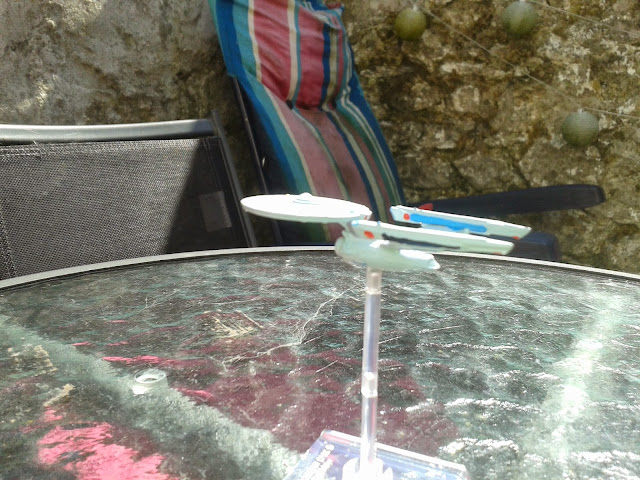 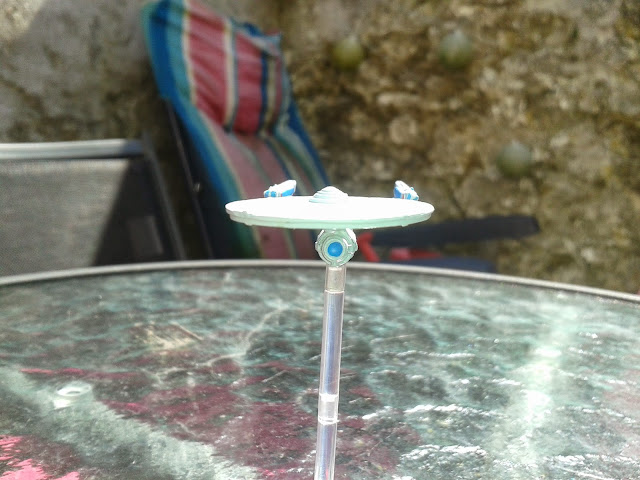 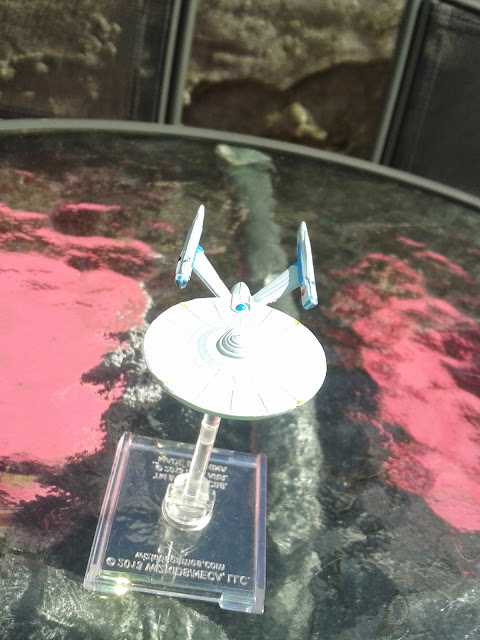 Over all, another great pack with a good mission and well worth picking up.
Labels: Attack Wing Federation Star Trek unboxing