Skip to main content
Labels
Posted by Unknown May 15, 2015

Jem'Hadar attack ships were vaguely insectoid, looking much like a Terran scarab in design. Extremely sturdy, these warships were capable of surviving the impact onto a planet's surface. As well, Jem'Hadar attack ships were able to land intact on a planet and take off again.  Once landed, the Jem'Hadar could land troops from the warship from a large access hatch on the belly of the ship. While capable of making planetary descents, they were not capable of conducting battle manoeuvres while in sub-orbital flight.

Although highly maneuverable, they lacked the edge in manoeuvrability that Starfleet's Danube-class runabouts possessed. Despite this, they still heavily outgunned the smaller Federation vessels.  Jem'Hadar fighters generated a 39 cochrane warp field and were capable of achieving the speed of warp 7. 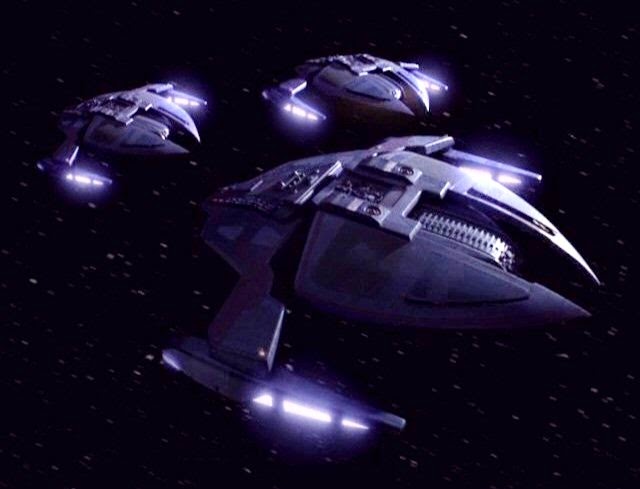 Early engagements resulted in disastrous outcomes for the Starfleet vessels that engaged them, due to the fact that the shields of Federation starships were initially incapable of deflecting the phased polaron beams employed by the fighters as weapons. However, the Federation overcame this handicap fairly quickly, after which Jem'Hadar fighters became relatively easy for a large starship to destroy. A few solid phaser or photon torpedo hits were enough to cripple or destroy one, therefore, they usually operated in groups of two or three during routine operations, and in much larger swarms in large battles so that the loss of one or two would not make much difference. It adds a nice manoeuvre dial to the Dominion, who with the sluggish Cardassian ships needs it.  These are nimble enough to cover the flanks of the larger warships. 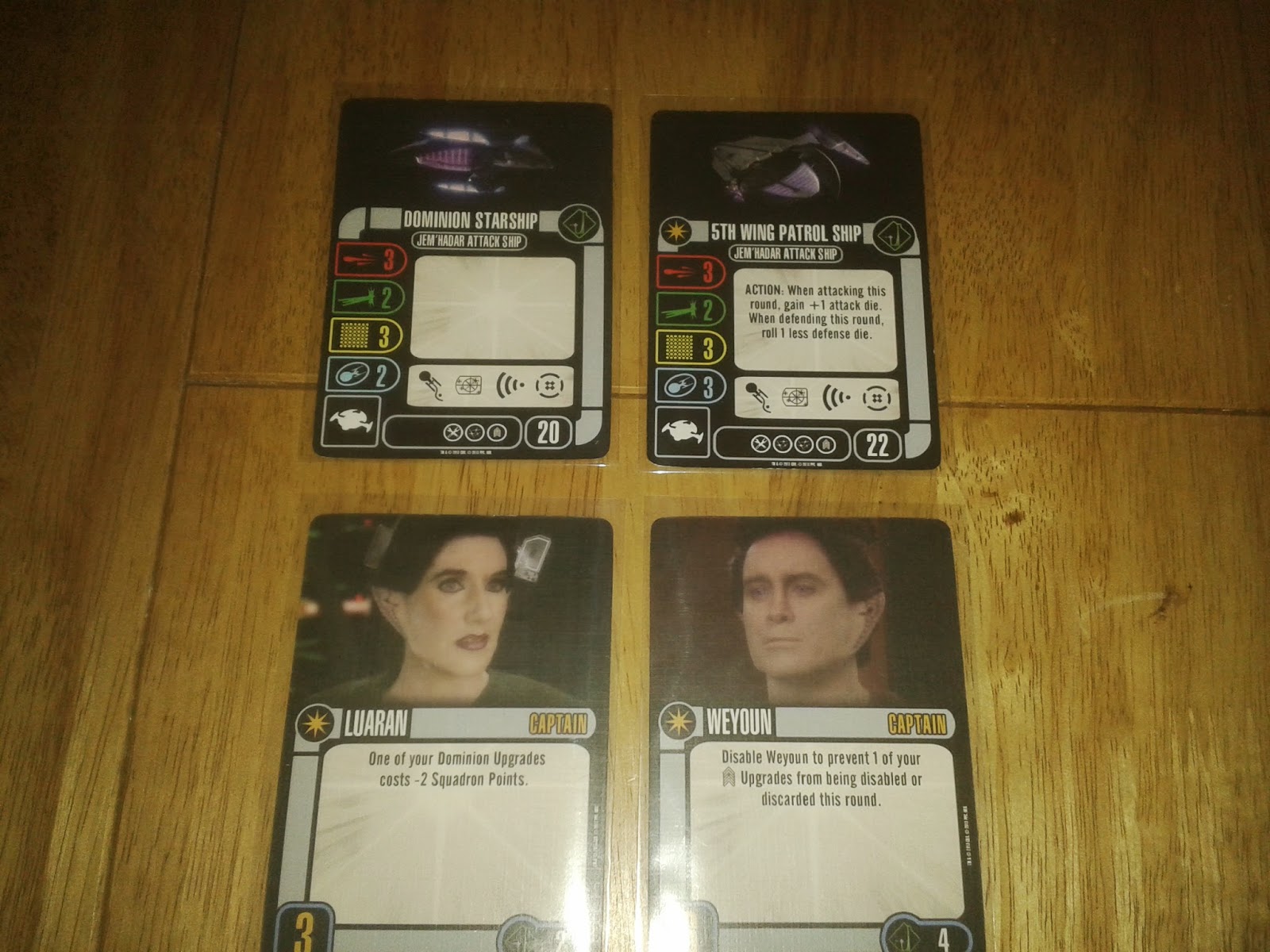 As always you get a generic captain, and a generic ship.  The named one, 5th wing patrol ship, is cheap, and has good stats all across the board.  It wont stand up to a big battleship, but used right it can put up a fight.  The named ship has an action to add extra firepower to it, a crew slot, couple of weapon slots and a tech slot.
For captains we have two Vorta. Luaran, who is 2 points for captain skill 3, so not bad, and she makes a dominion upgrade 2 points cheaper.  In reality a 3 point captain for free.
Next at skill 6 and 4 points we have Weyoun.  His ability is very useful, you can disable him to stop one your crew being discarded, meaning you can reuse those crewman.  A very handy ability. 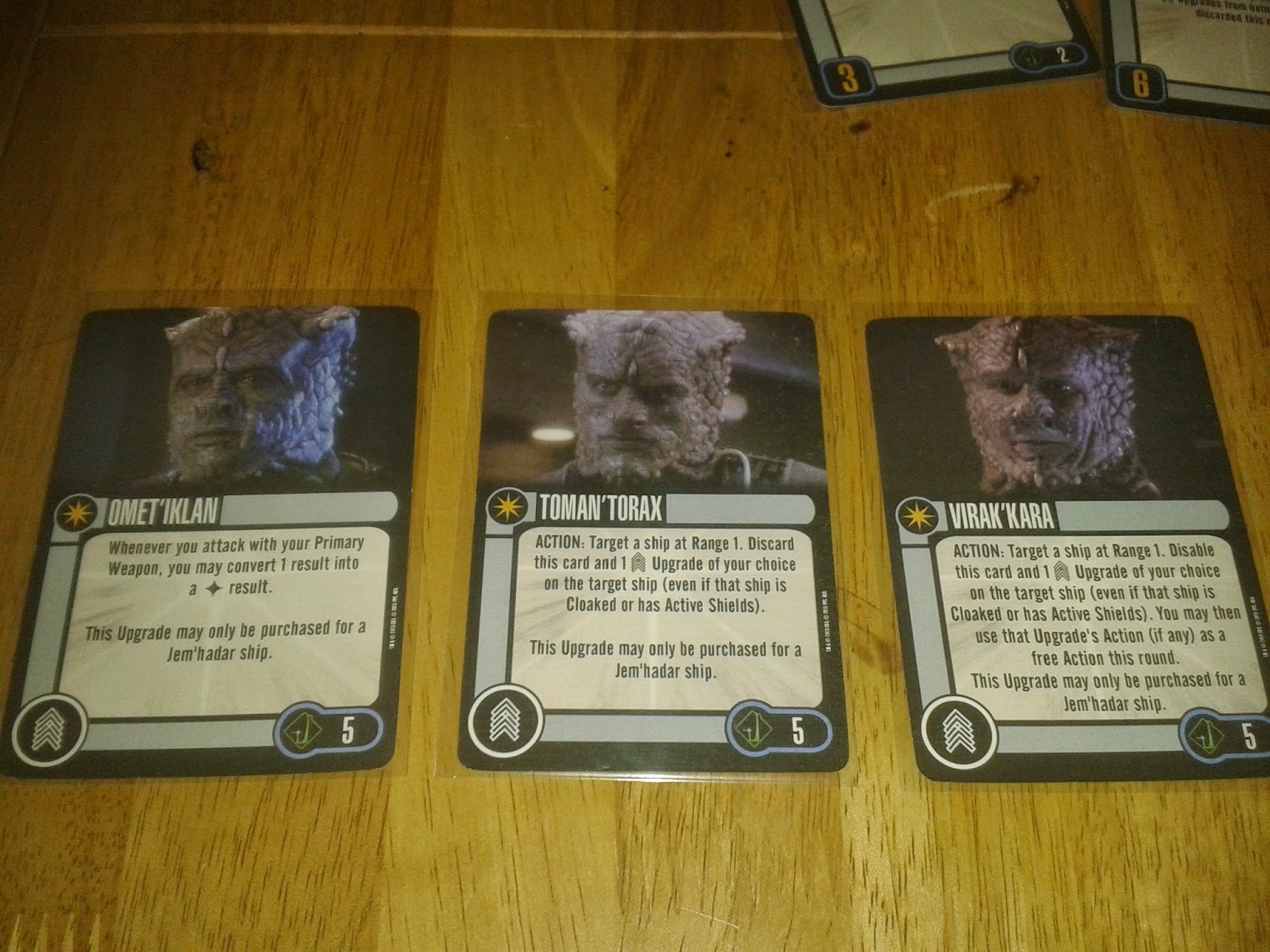 It comes with 3 crewman, all Jem Hadar.  Omet`iklan is a good upgrade for firepower, he guarantees you a hit every time.  Toman`torax can as an action discard himself and an enemy crewman even if the ship is shielded or cloaked making it quite powerful.  Combined with Weyoun, he is very powerful.  Finally for crew we have Virak`kara who can target an enemy crew one at range 1, even cloaked or shielded, disable the enemy and use his action as a free action.  Again very powerful. 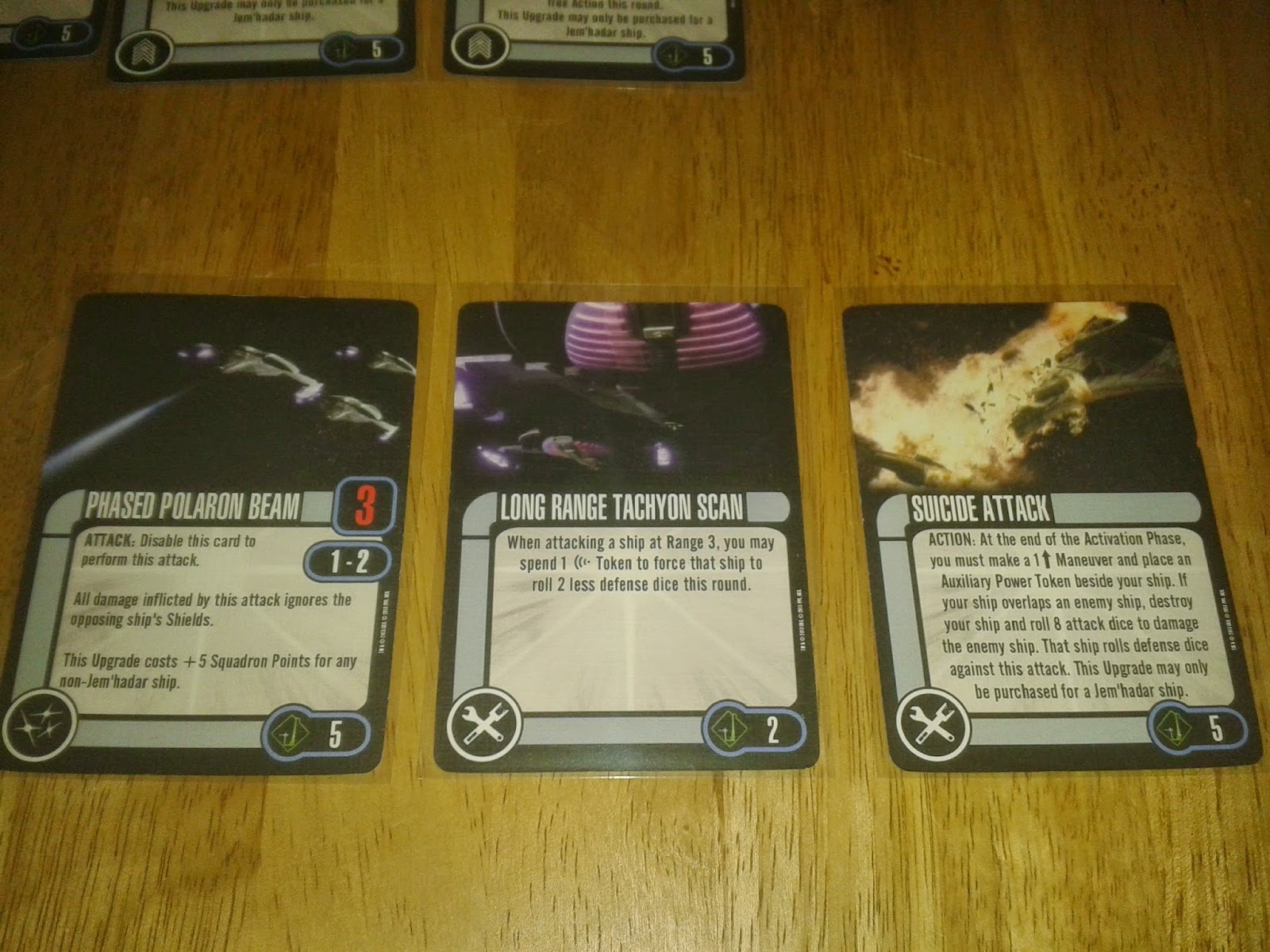 We have one weapon upgrade, a phased polaron beam.  It is only a 3 attack but it does ignore enemy shields.  Then we have 2 tech options, the long range tachyon scan, which when attacking at range 3 you can spend the scan token to force the enemy to roll 2 les dice.  Handy when you put long range shots on your opponent.  Lastly for tech we have suicide attack, which is very thematic considering the first time we see these ships in action is smashing into a galaxy class and destroying it.  It is tricky to pull off, but if you can it goes off with 8 dice, and if your ship Is on its last legs, why not try it?

A solid ship to add to the Dominion forces, so solid in fact I have two.  Though I will try a repaint on the other one so keep an eye out for that.