Skip to main content
Labels
Posted by Unknown May 26, 2015

Time to break out scenario 3 for Mars attacks.  Olivia was as always rolling as the humans and I took the Martian forces. As in all the scenarios it gives all the set up information, rules and troops used.
We set up the board ready for action.
This looks like a tough mission for the humans, fighting off waves of assaulting Martians.
Olivia got stuck into setting the board up 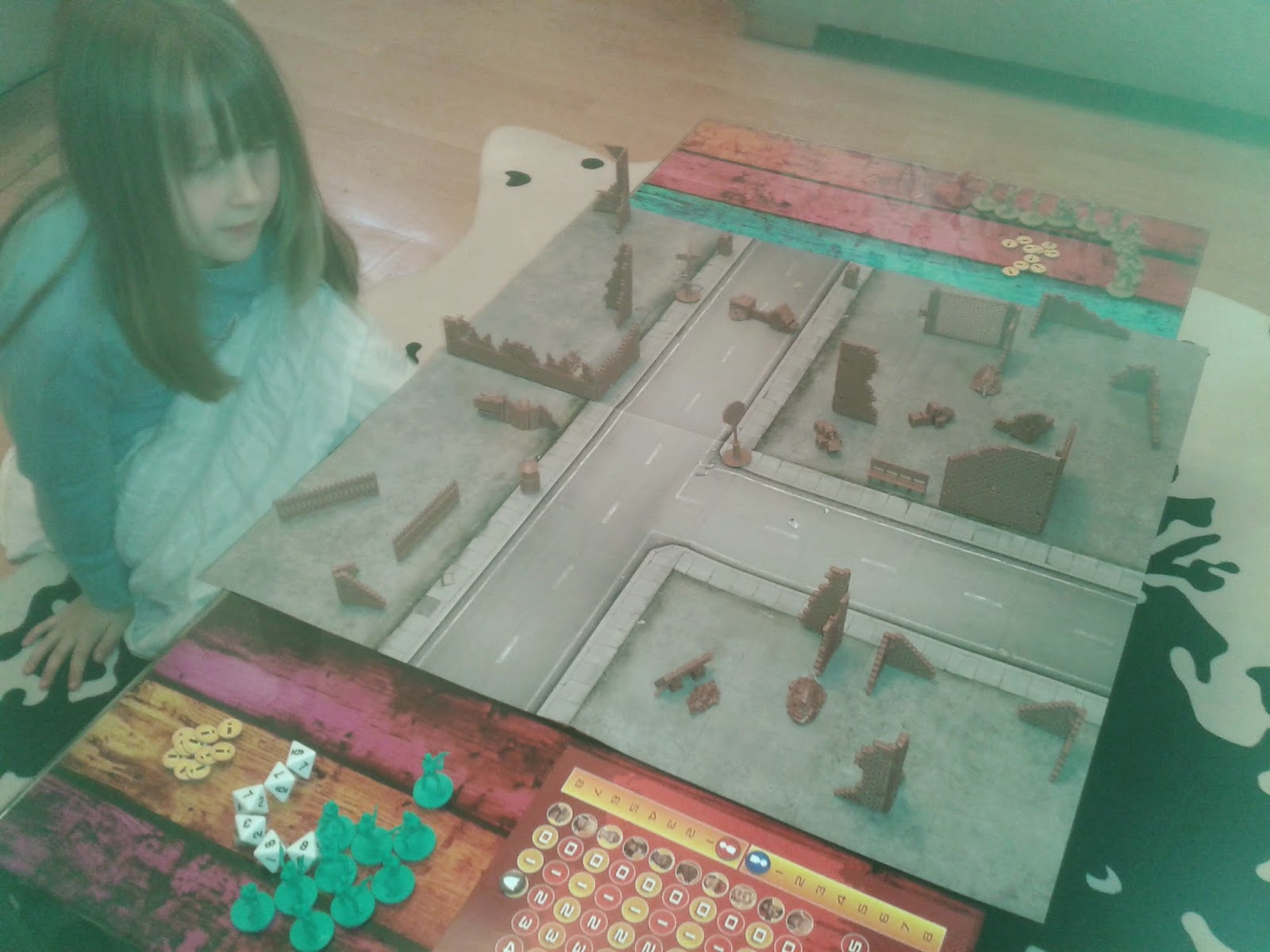 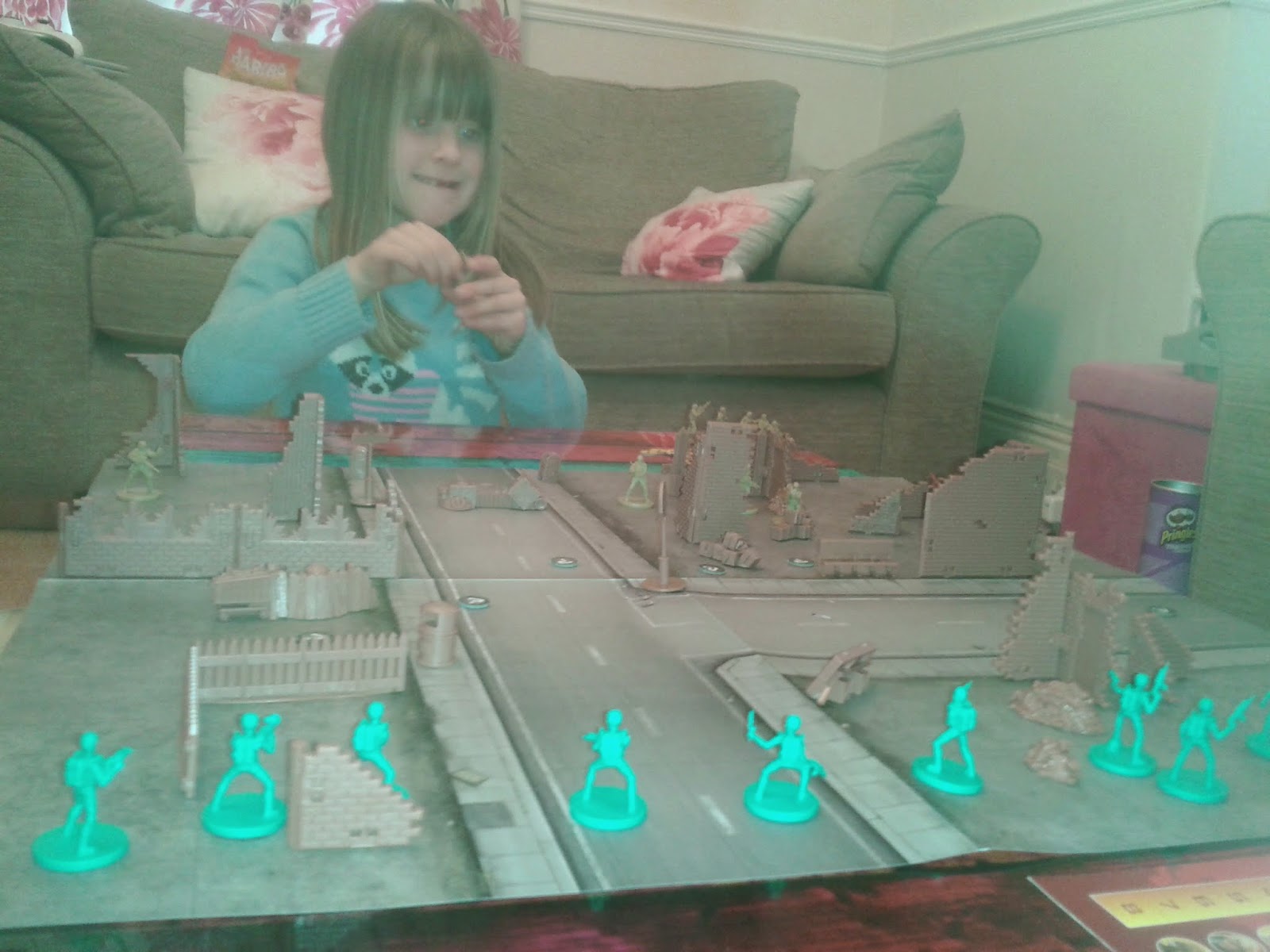 There was much thoughtfulness during setup. 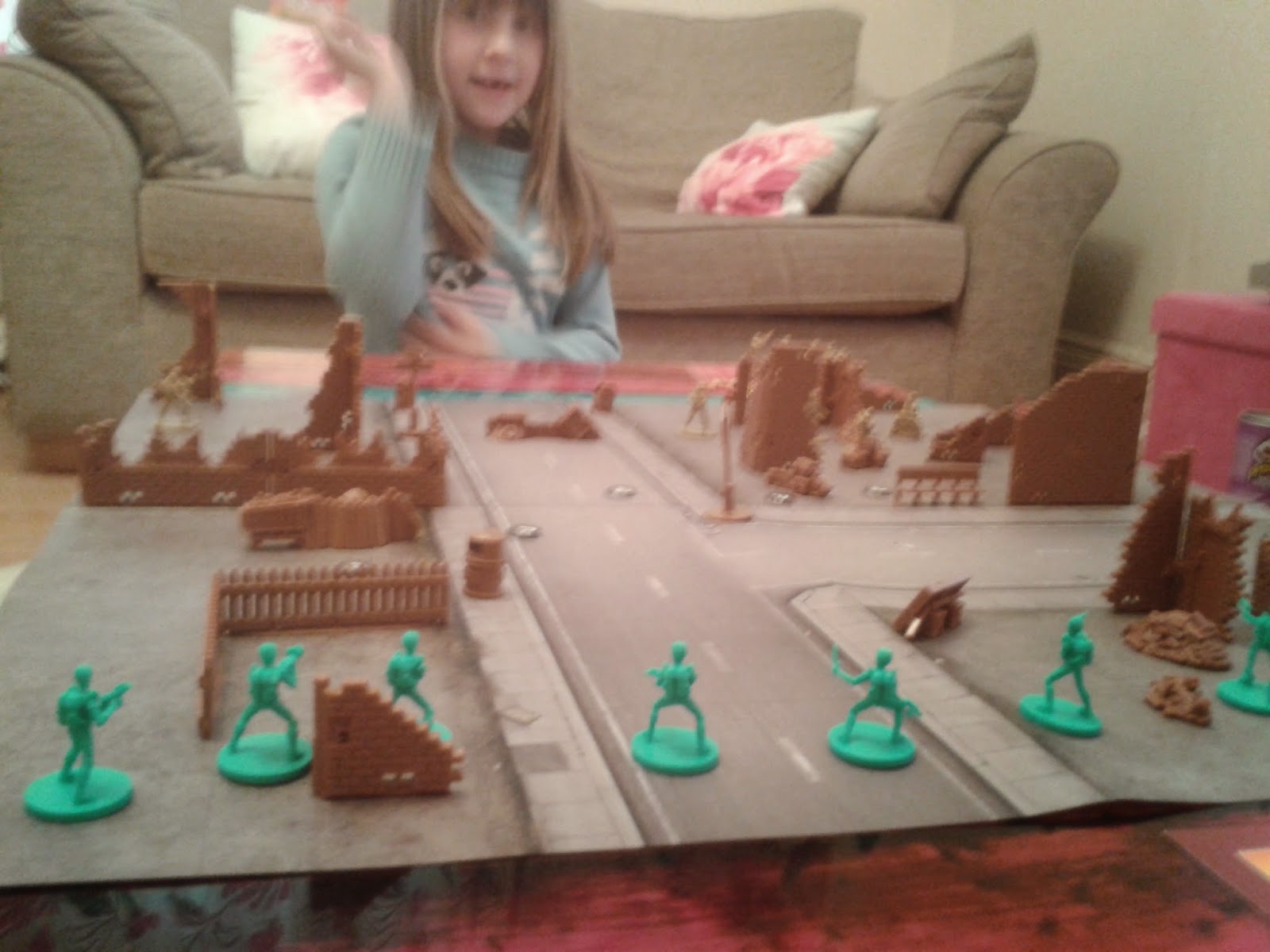 The Martians prepare to advance! 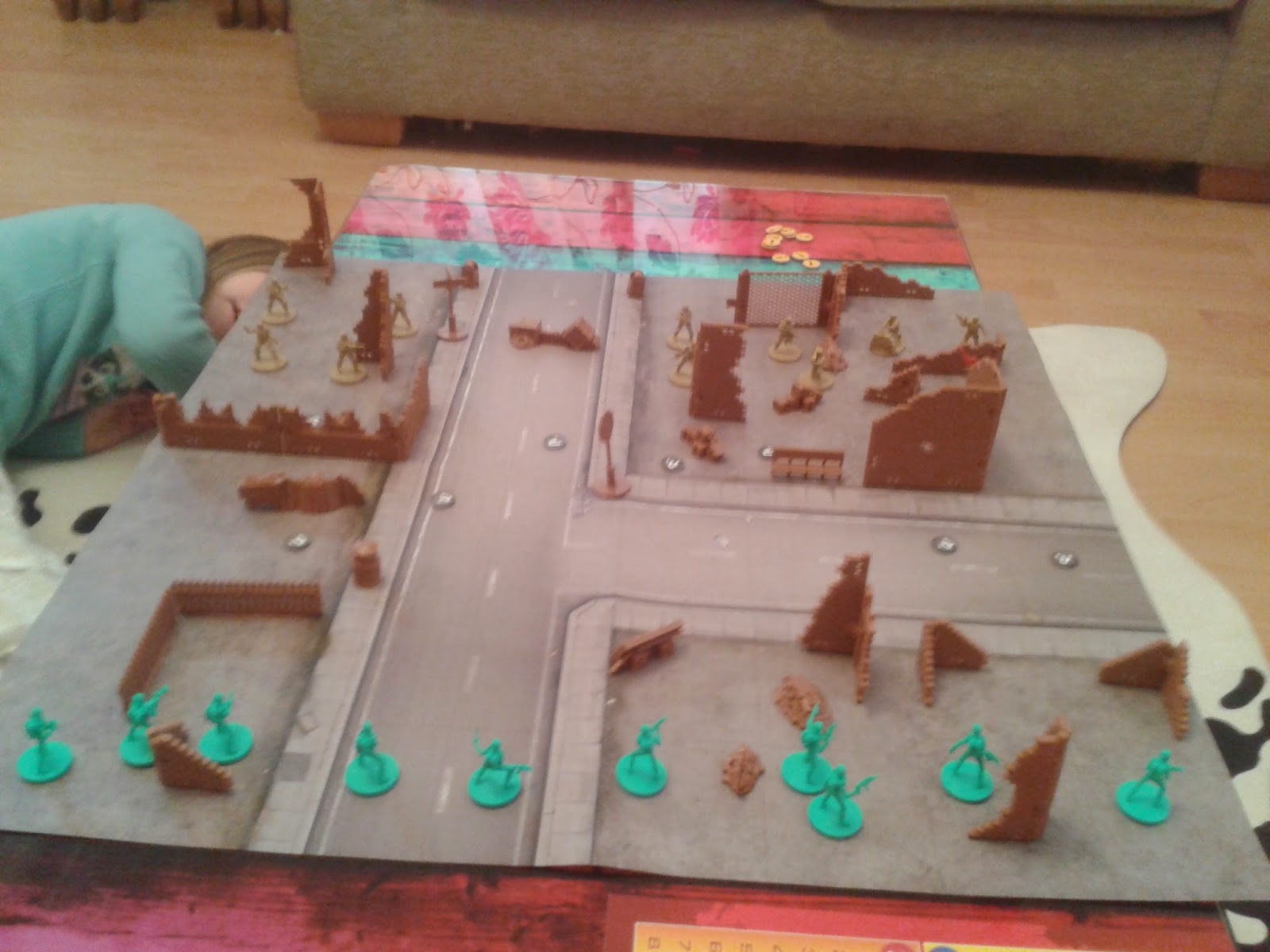 Olivia didn't realise she didn't need to take cover yet!

Recovered of her wounds Sergeant Olivia was back out with her squad on patrol.  She saw a civilian running from cover towards her, armed and moving well, he was trained, probably ex spec ops from the way he carried his gun and worked the cover.  He stopped and looked her up and down. Martians are coming this way, a horde of them he said.  Sergeant Olivia stopped and looked down the street.  sure enough she could see lots of Martians in the distance getting closer.  She radioed into base "Echo base this is Echo 1 come in" a voice came through the static... "Echo base here, go ahead Echo 1."  " Martians are incoming hordes, we need permission to fall back or reinforcements" .  Her headset crackled before she got the response "Negative Echo one, we have no one to spare, and your all that's between the Martians and our medical facility.  you must hold them at all costs." Sergeant Olivia sighed and responded "Received and understood... Echo one out."
Well guys, its just us she said looking at her troops, "and me" the stranger added, names Deke.  Olivia nodded at him, could do with all the help we can get.  Take positions gentleman the line must be drawn here! we hold them. now get into position! 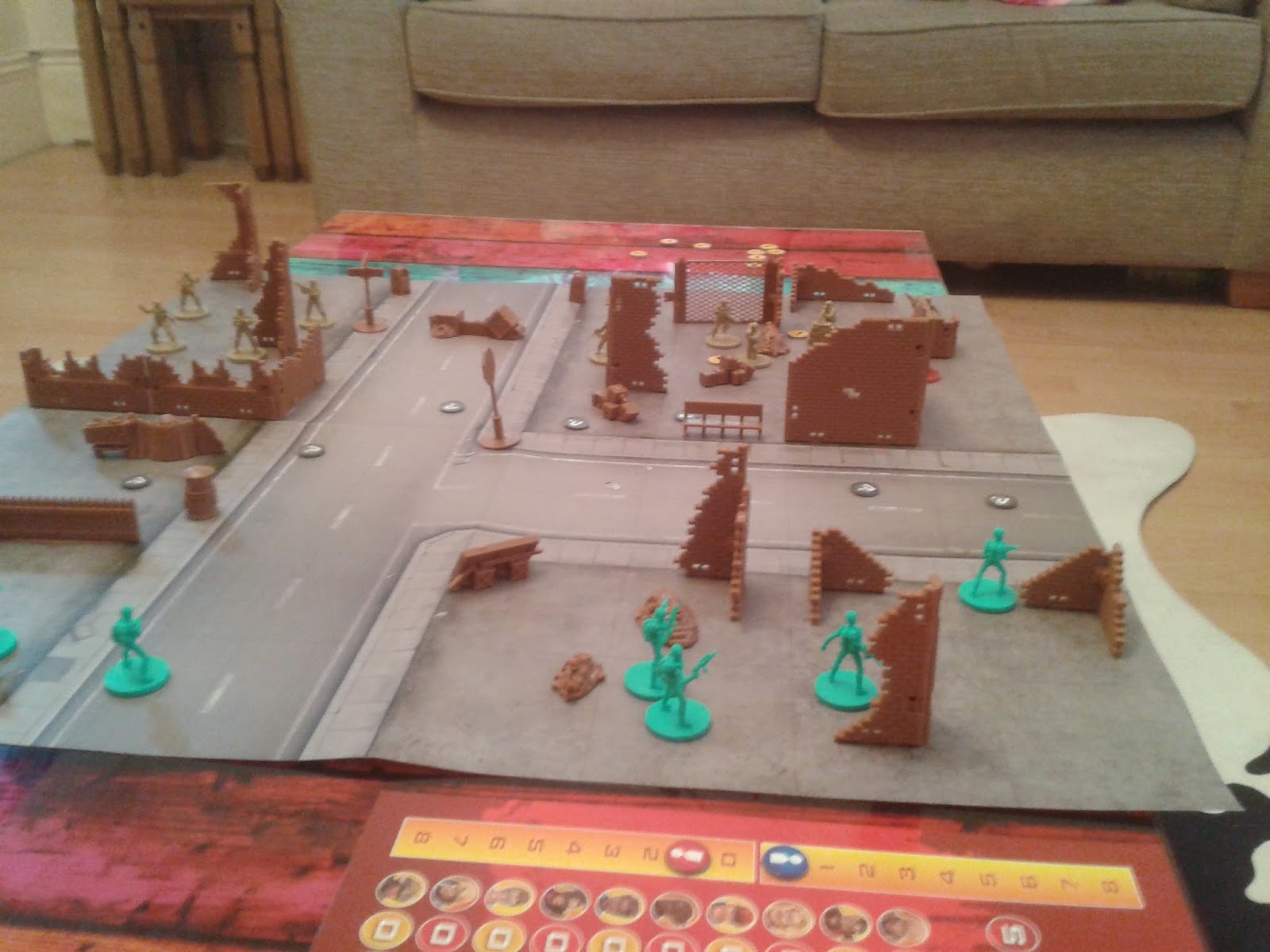 The Martians where out of range, so began to move up, but human gunfire began to takes it toll! 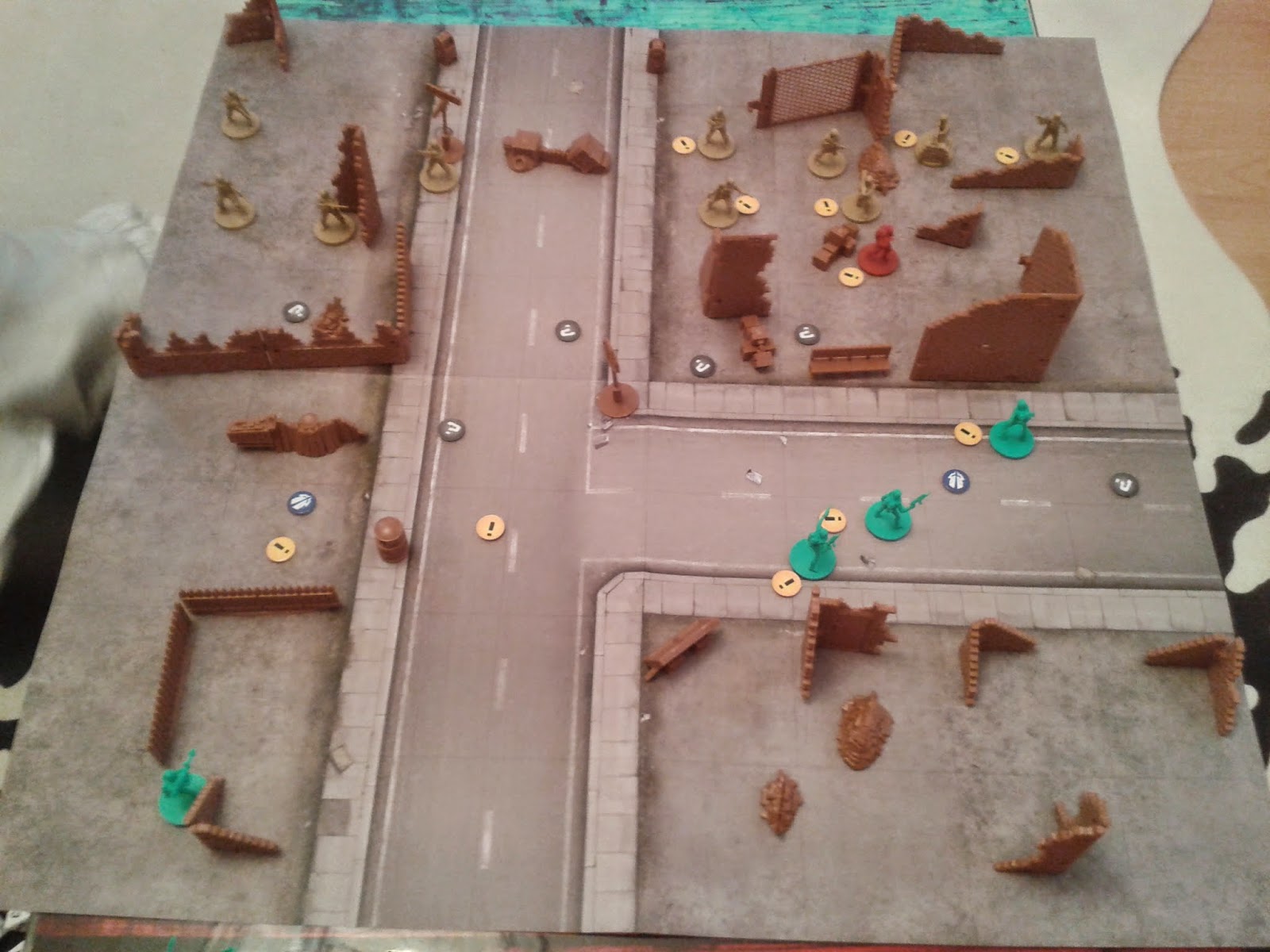 Olivia was rolling high, ripping the Martians apart the rocket launchers and Dekes good to hit roll was taking a troop out a turn! the humans where aiming and firing for maximum effect before the Martians closed in.  This was hurting! 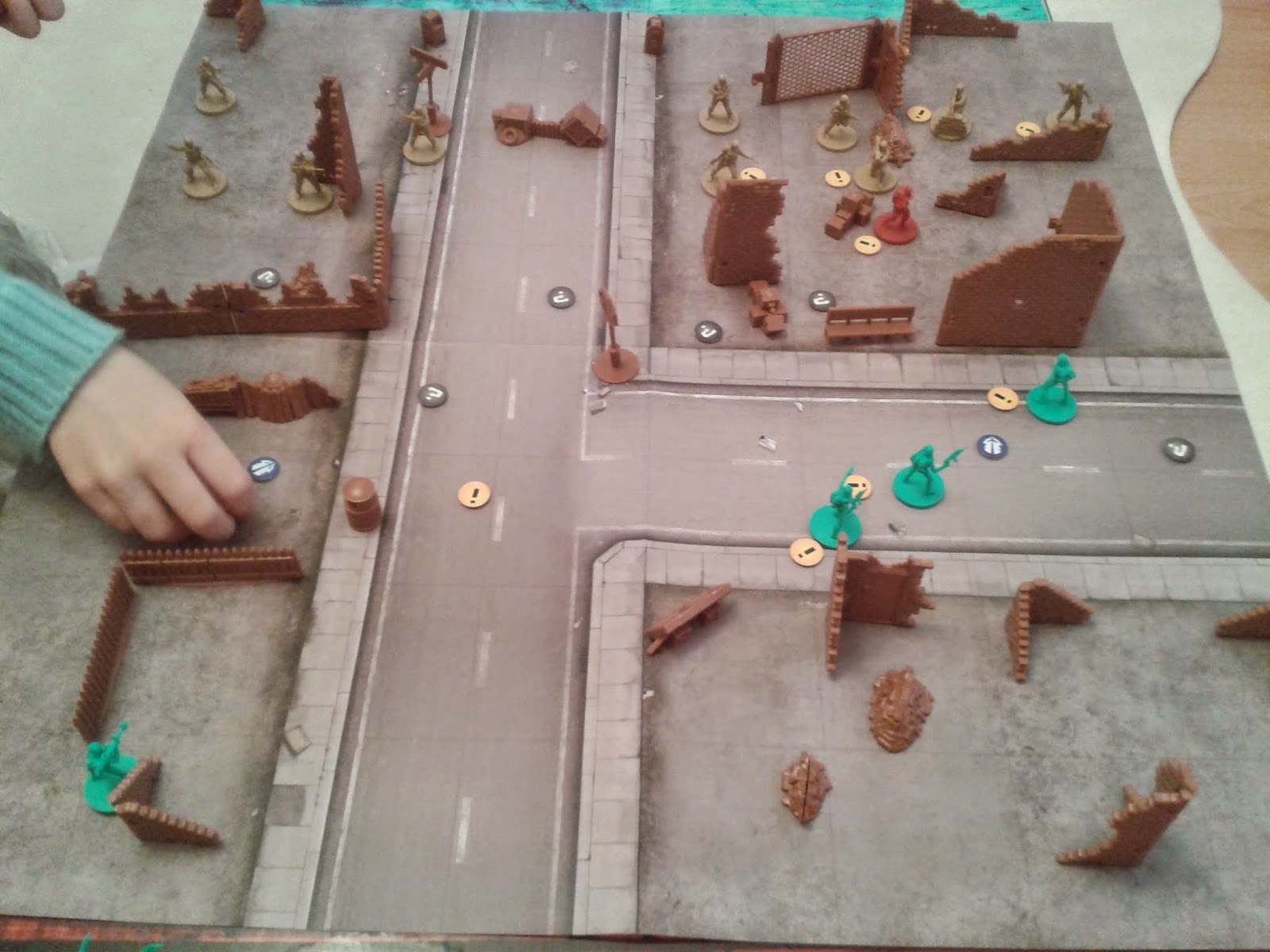 nearly the entire Martian left flank was gone, with no human casualties! not good.  The Martians decided to swing round into cover on the right, and work around. 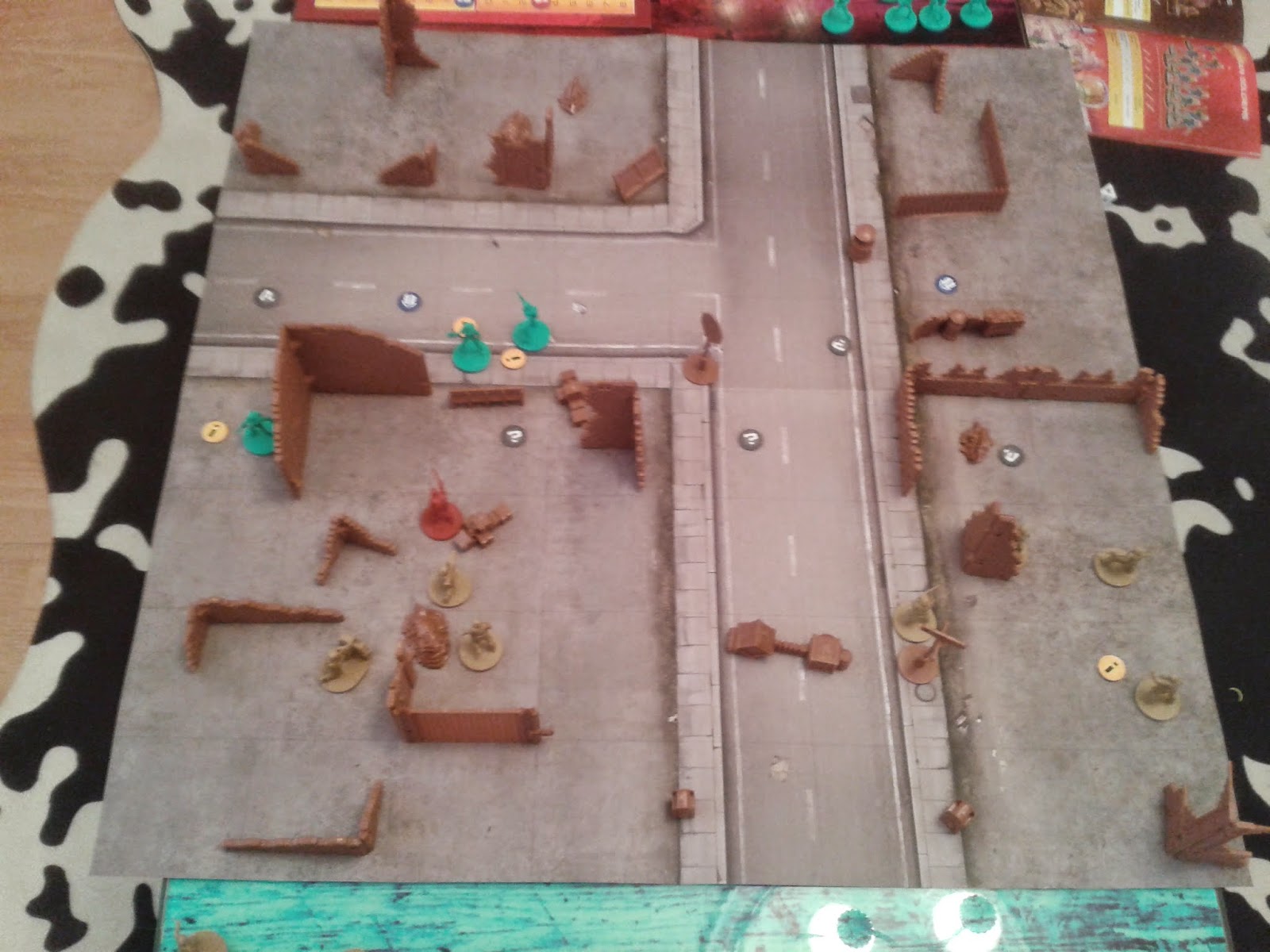 As the Martians got closer, the Disintegration rifles really began to shine, taking their toll of humans, the Martians are shorter range but more accurate with their weapons. 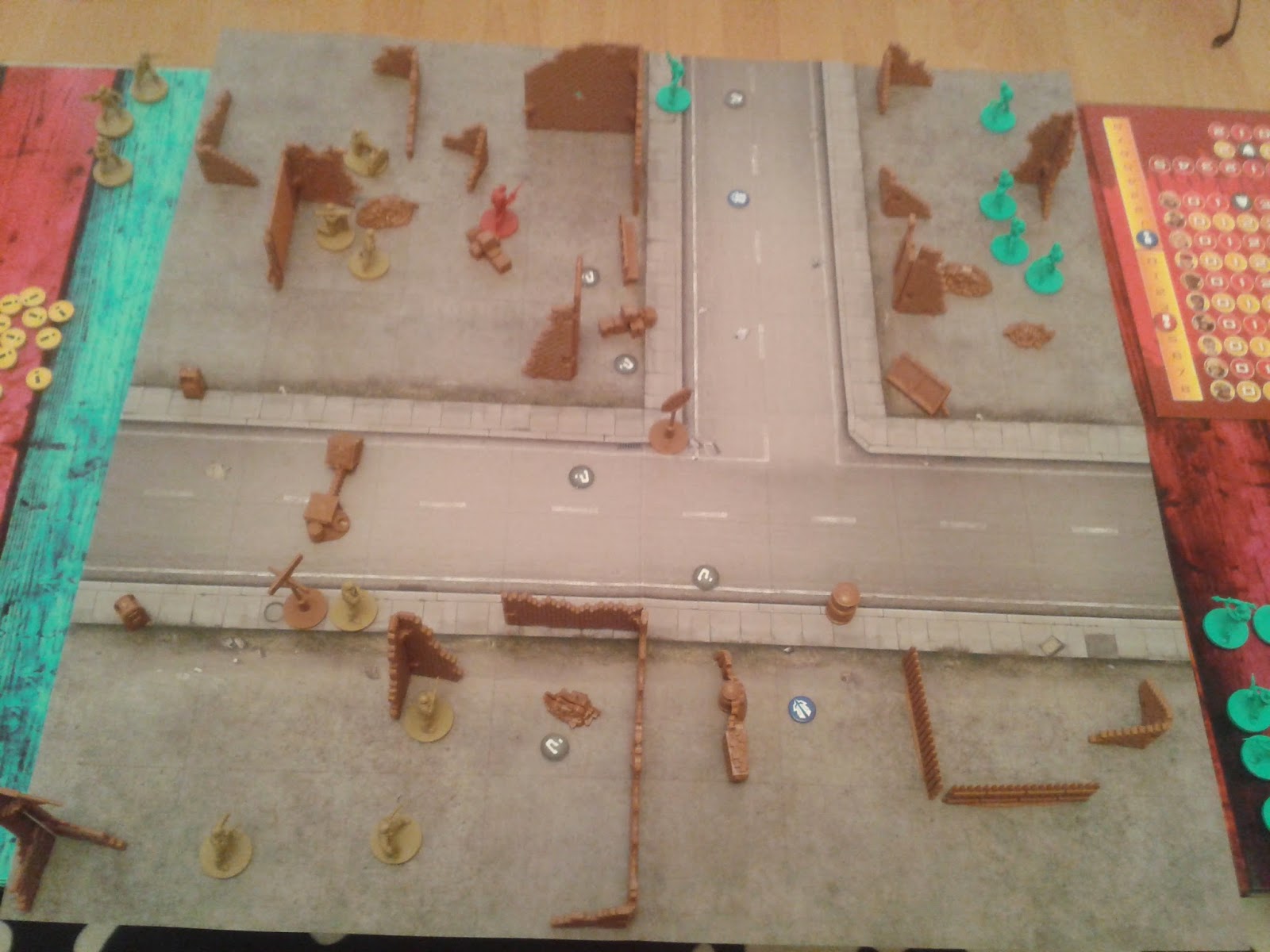 Turn 3 and Martian reinforcements arrive! much needed by  the Martian forces.  They came in to bolster the Martians right flank, where they where pushing hard. 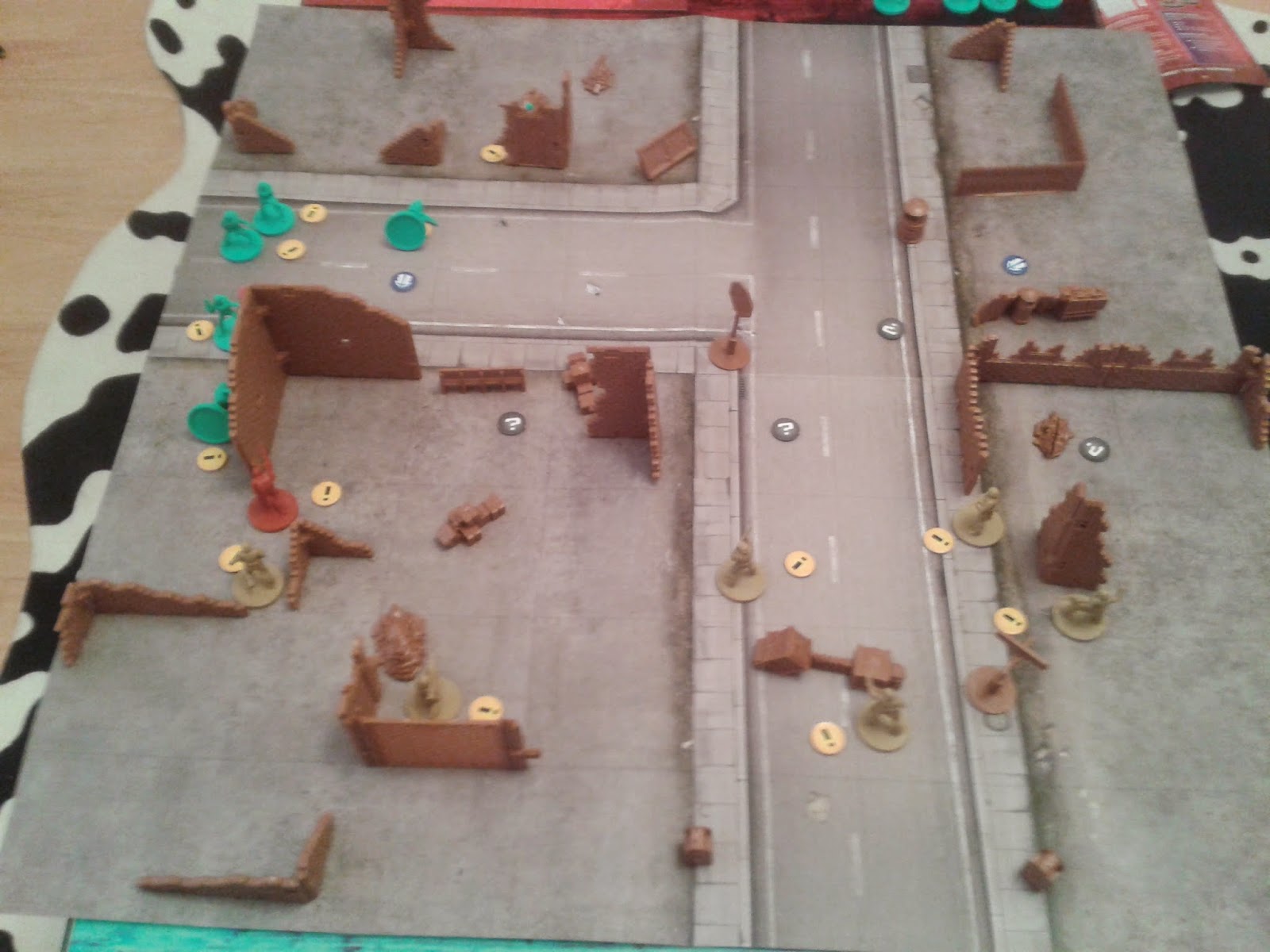 As the Martians began to push the flank Deke moved over to the corner of ruins to pop some more Martians. supported by an infantry man rattling another.  The troops on the right flank opened fire across the board slowing the Martian advance. 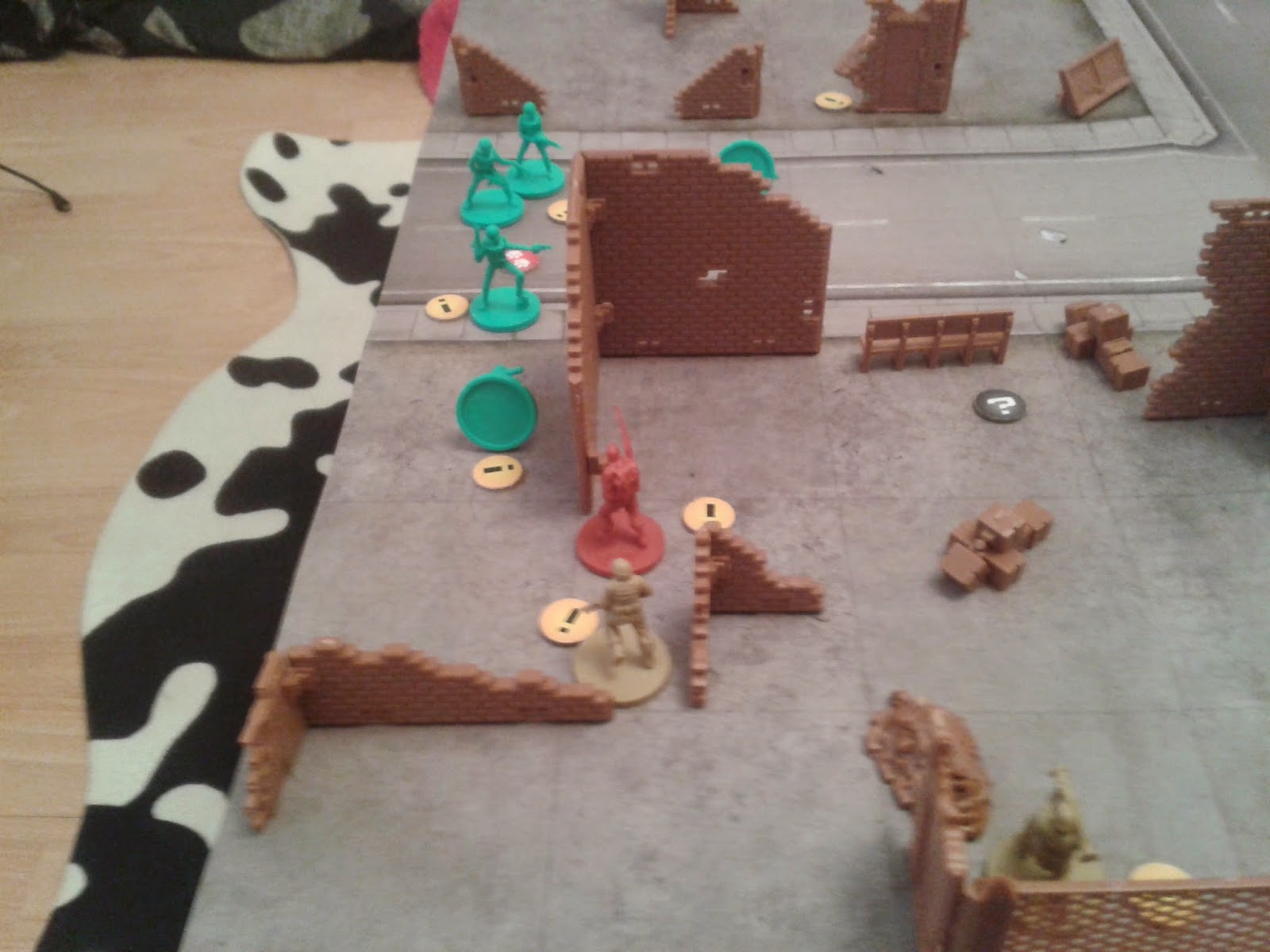 Dekes great survive roll and good shooting kept the Martians rattled and dying as they advanced. 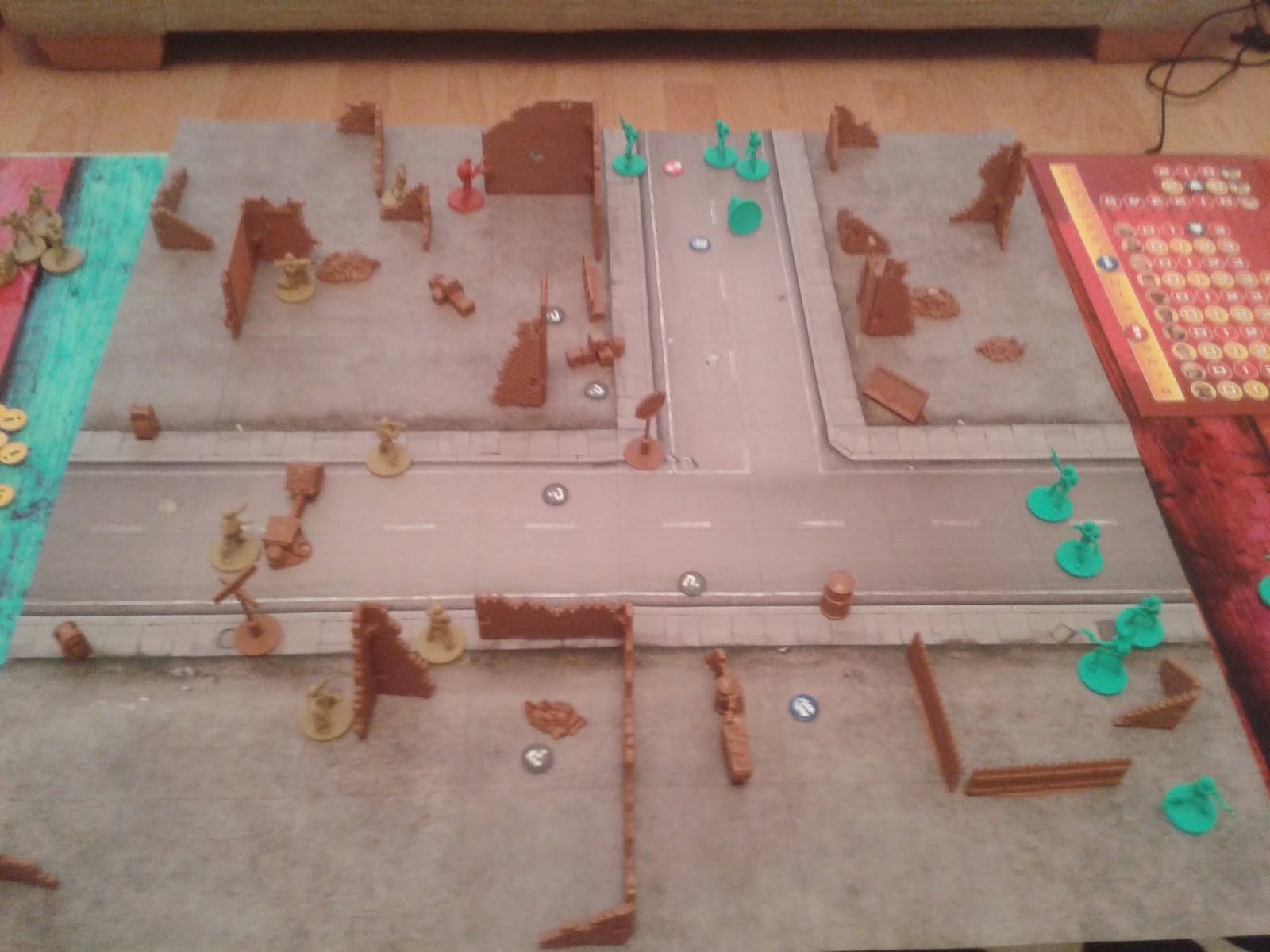 More Martians arrived as the final wave of reinforcements came on to push forward and draw off the enemy fire. 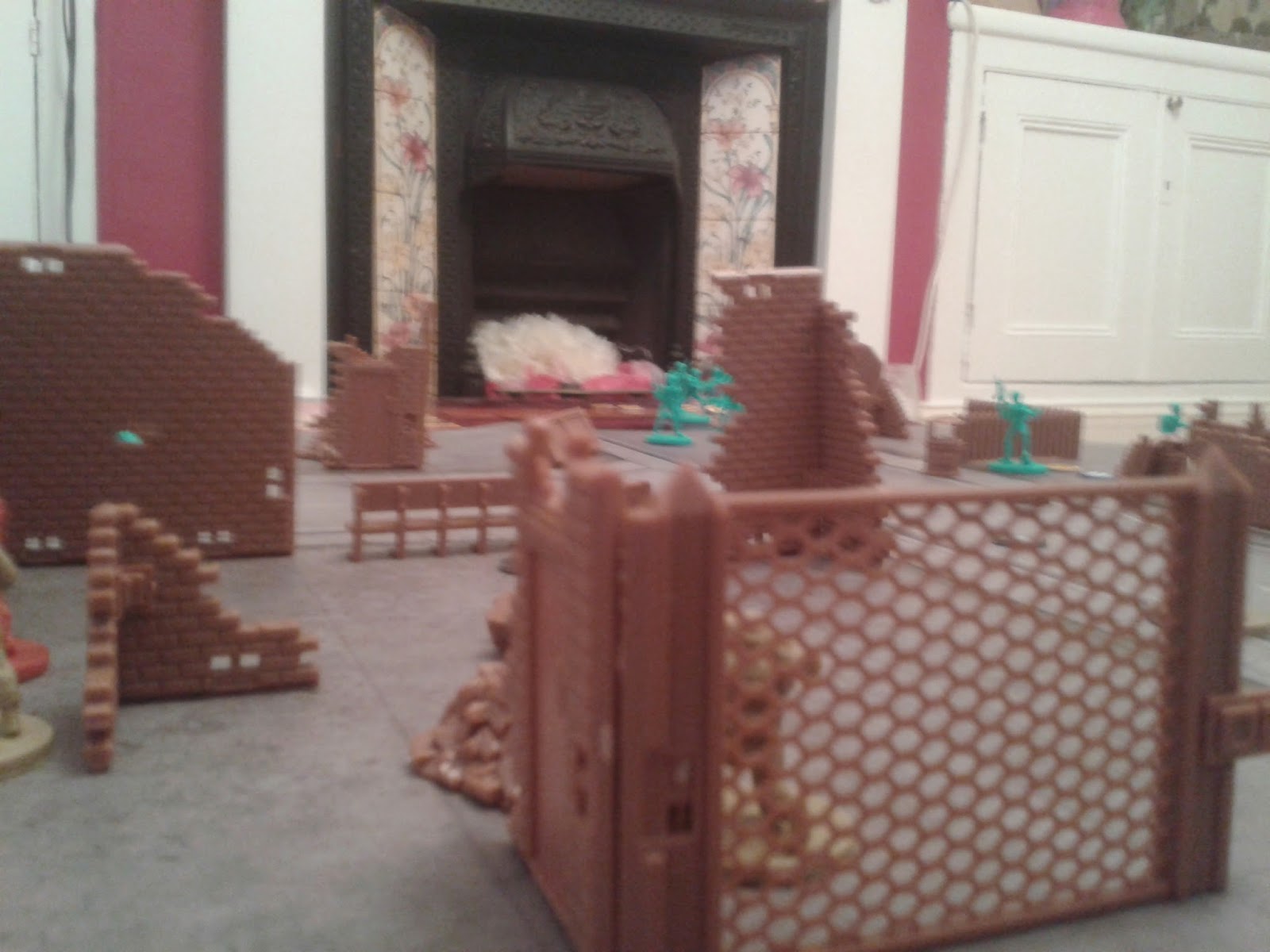 The Rocket launcher was a contender for star of the game, here he lines up a shot that disintegrates the Martian across the board. 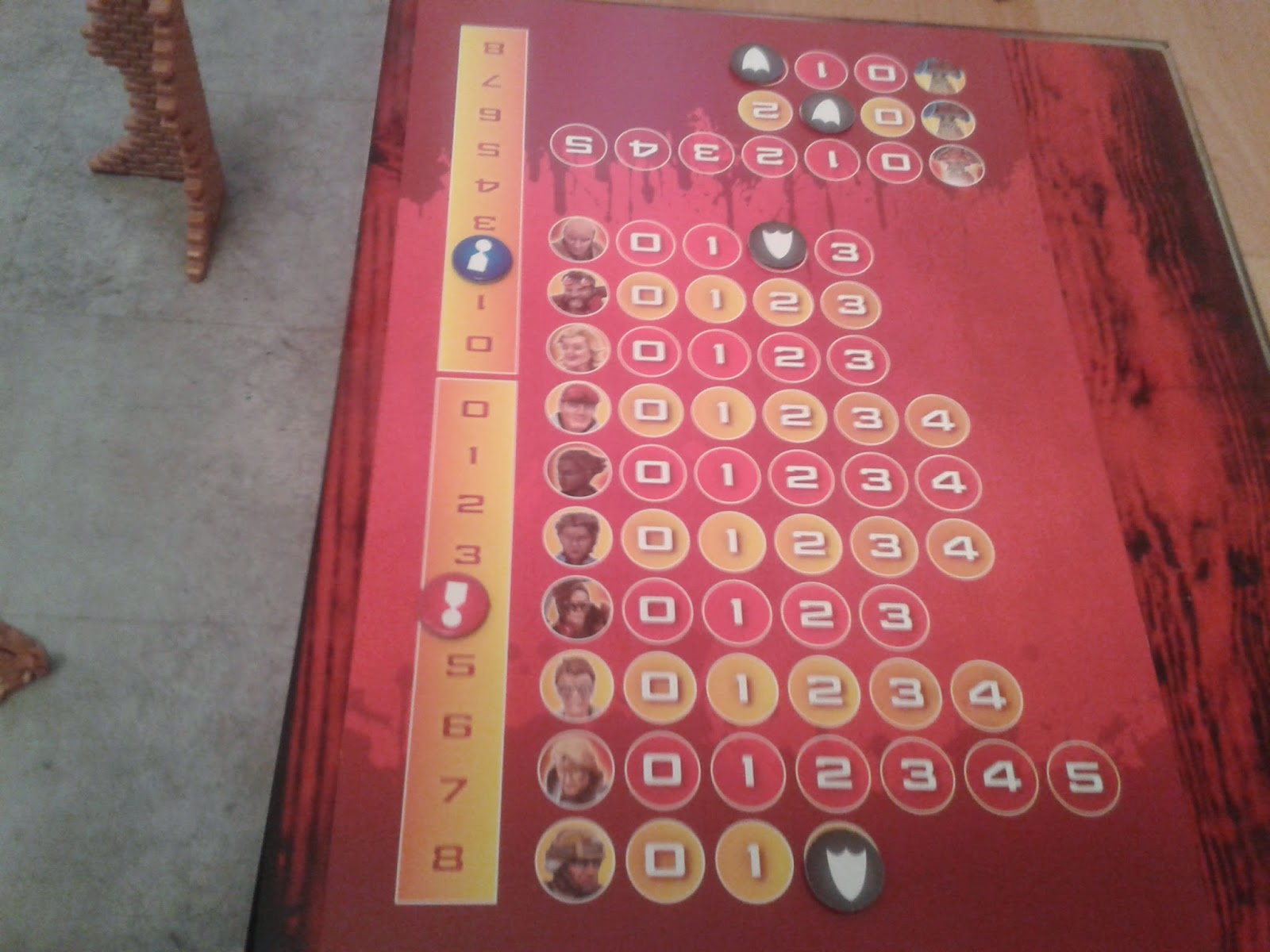 At the moment its 4-2 to the humans, and looking bad for the Martians, though killing Deke could change that! 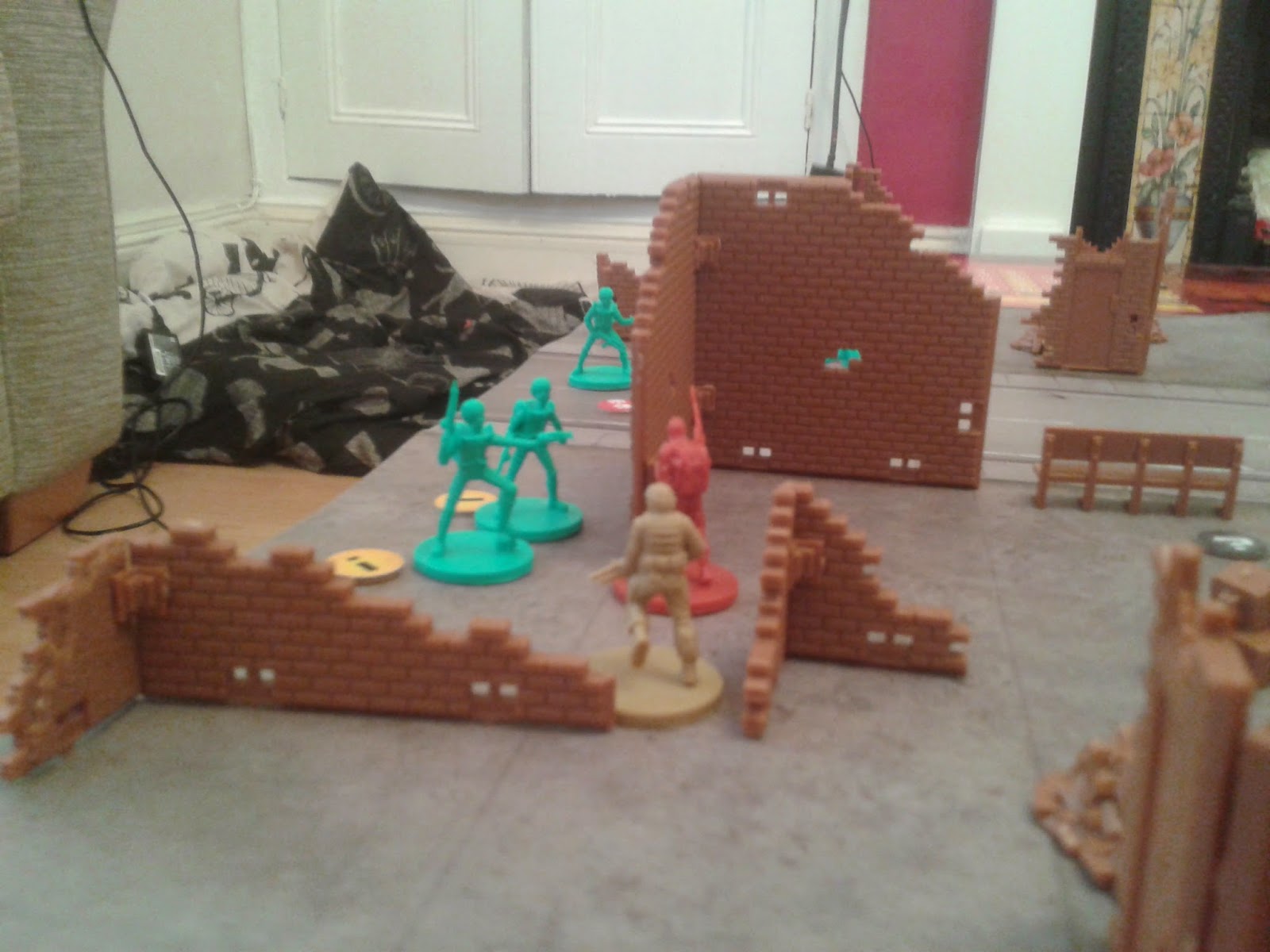 The Martian squad leader and a grunt round the corner and both fire at Deke, with his survive of 3 he takes no damage! But Deke and the trooper rip them apart in return! that's more victory points for Olivia! 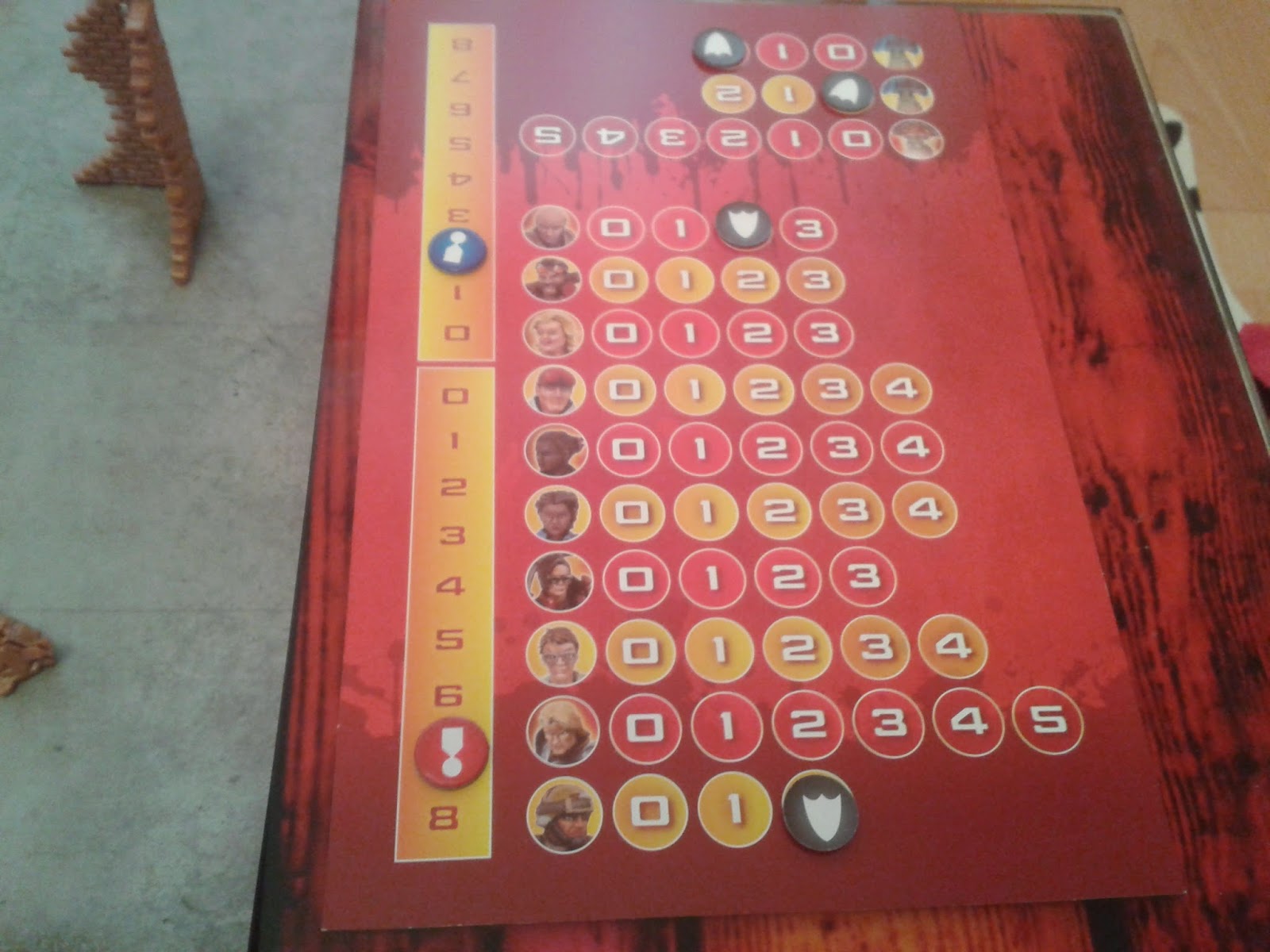 She needs one more VP for a human win, that's just 2 dead Martians, I need to be lucky now. 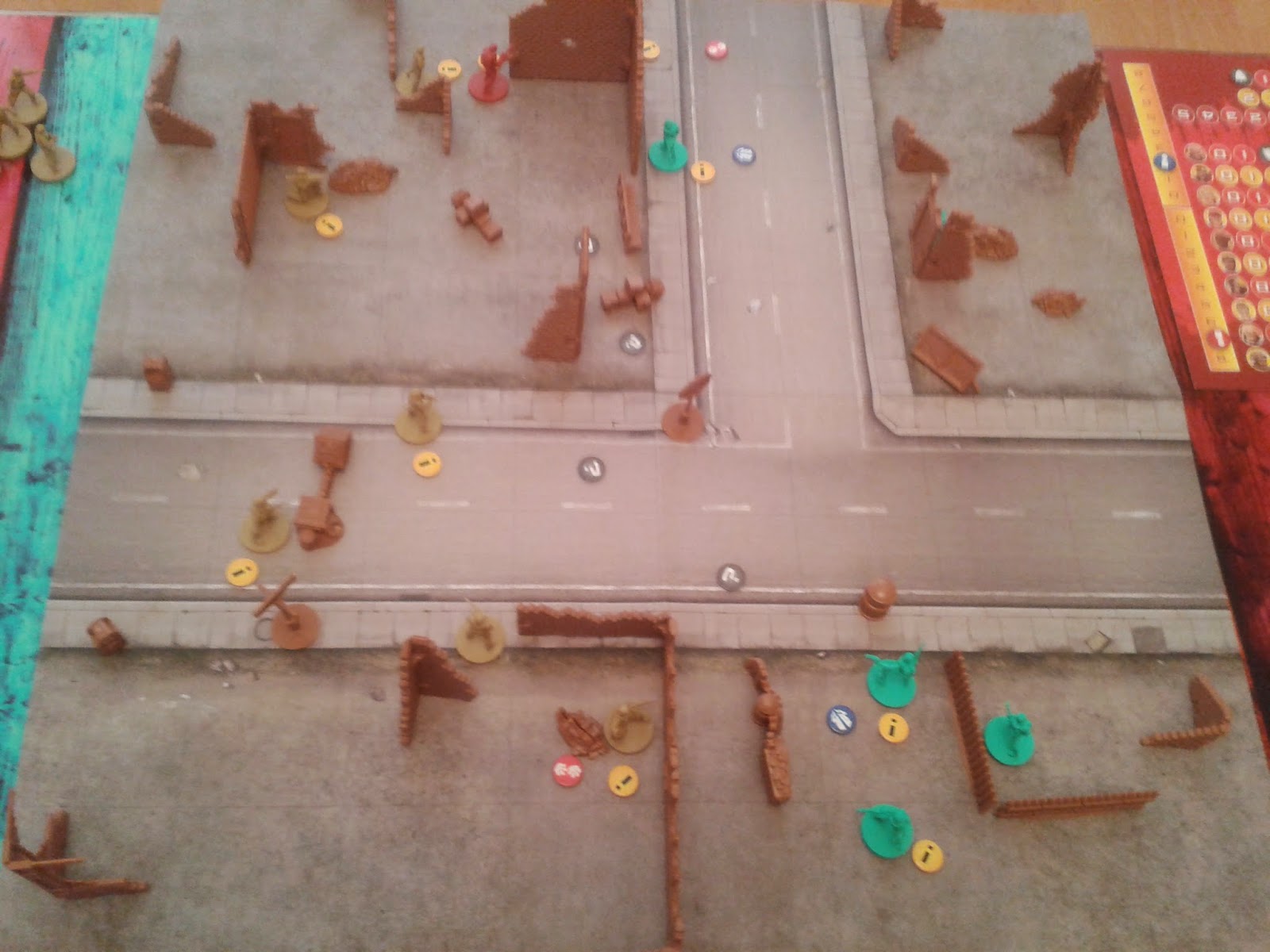 The Martians work the cover and are lucky to avoid taking any casualties this round. 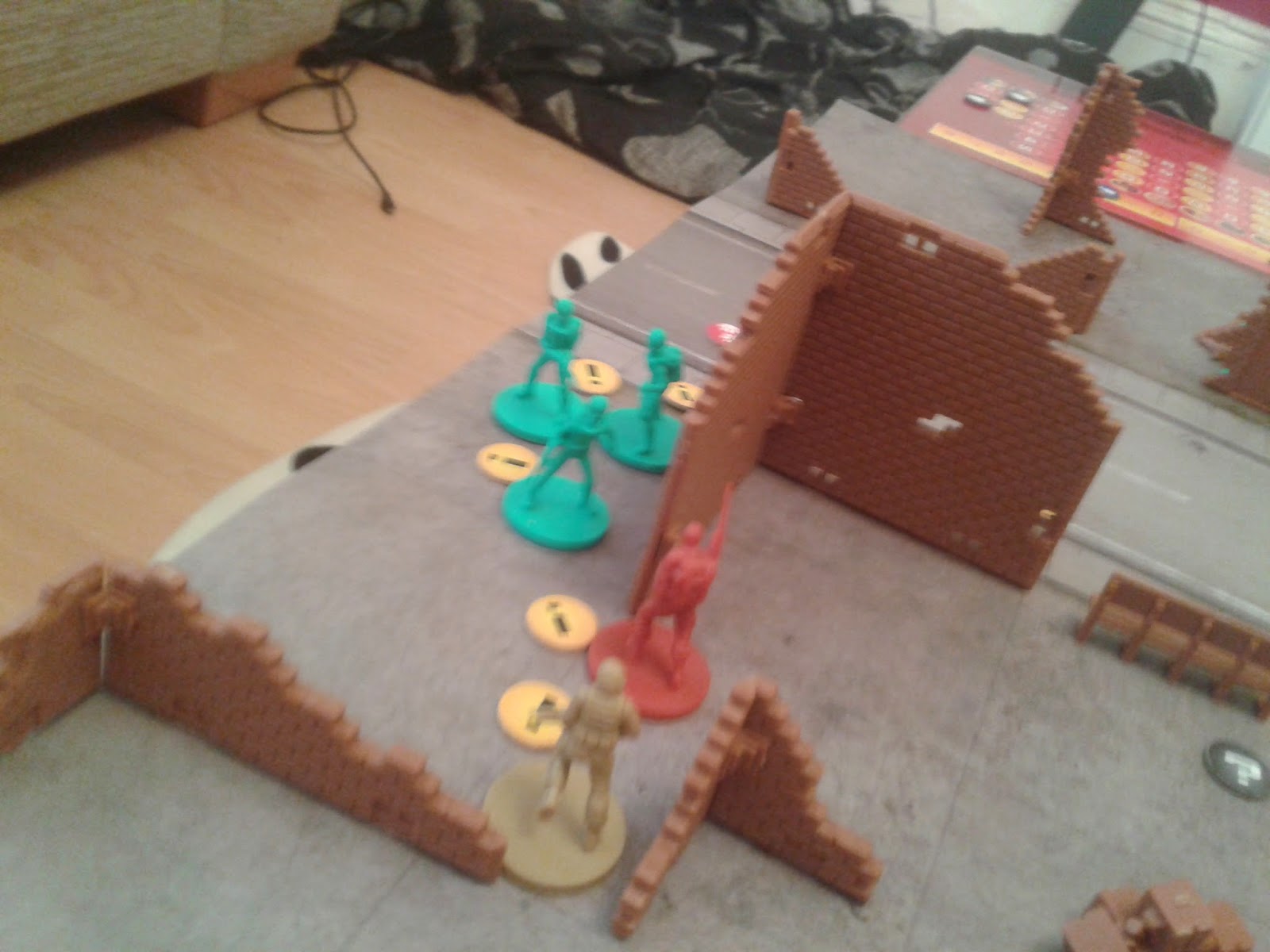 preparing to lay a hail of fire into Deke 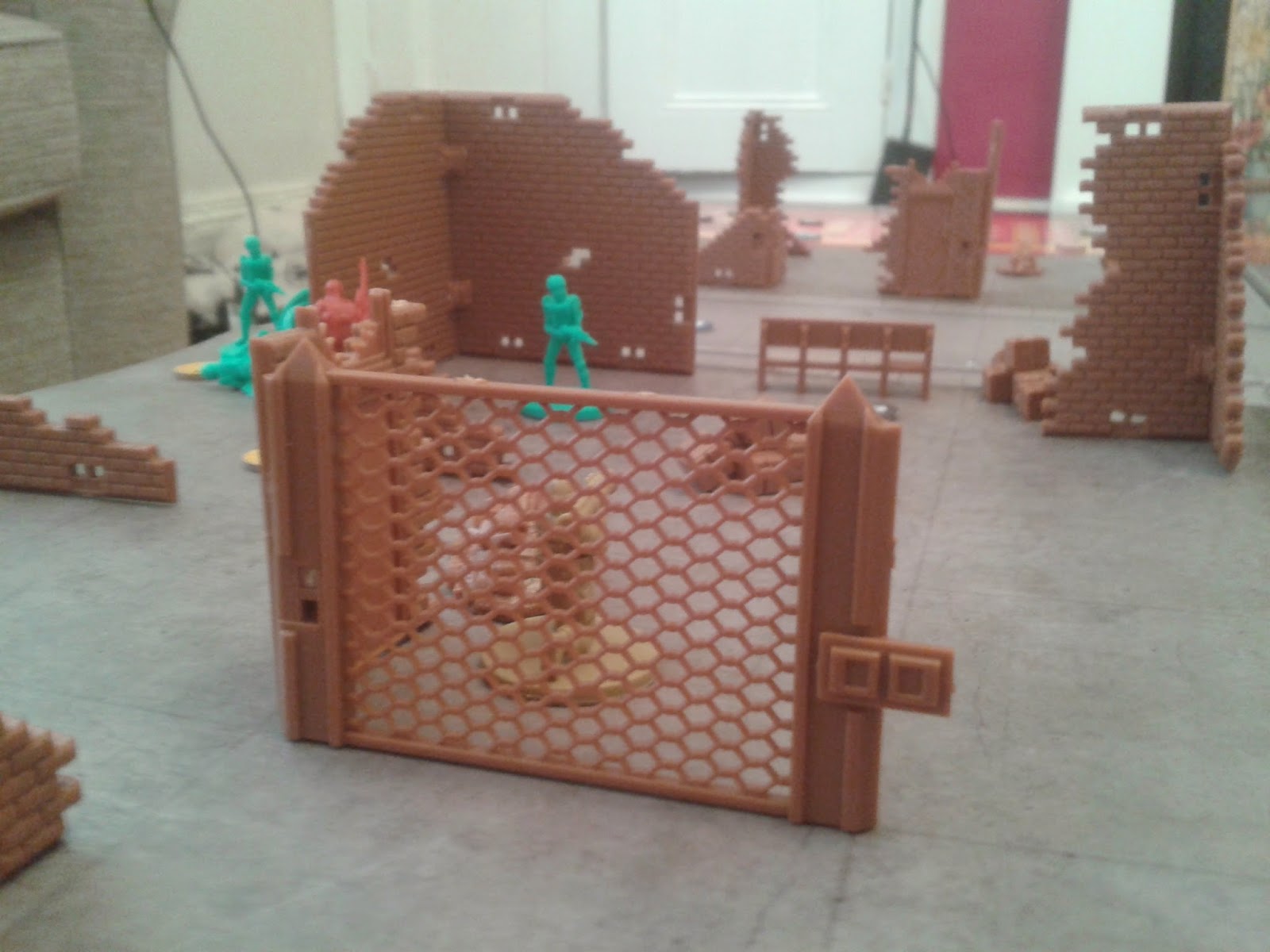 The Rocket launcher  turns and fires shredding another Martian, just one more kill and its game! 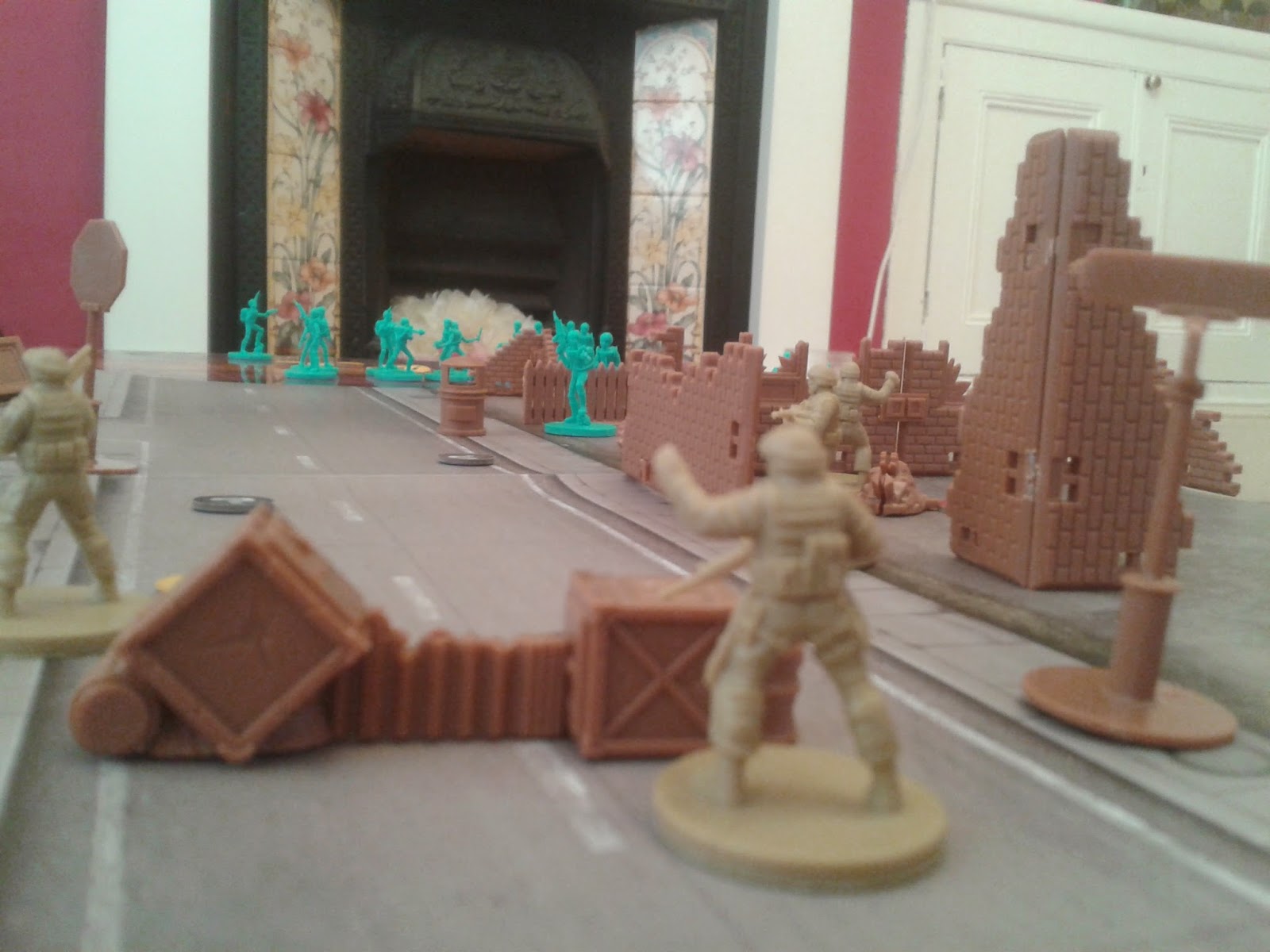 The Sergeant lines up a shot, aims and fires with 3 dice basic, plus 1 for aiming, and plus 1 for the Martian being in the open.  If this kills the Martian its game over!  Olivia rules high and the Martian low.  That's game over and a victory for the Human forces. 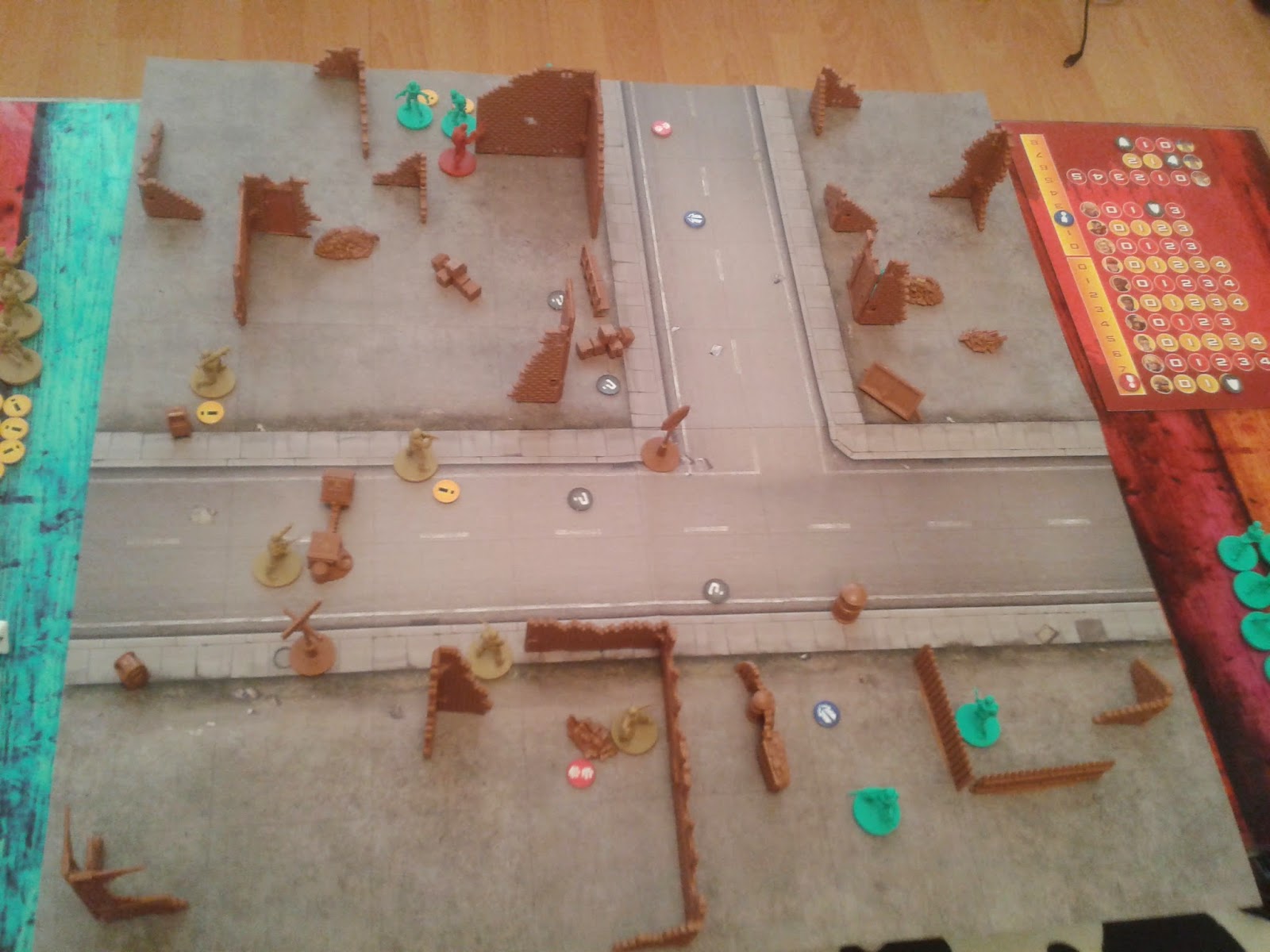 
The firing started to slow.... "they are falling back" someone yelled.  Sergeant Olivia watched as the Martians turned tail and dived back into the ruins.  She looked around her.  Six of her men lay dead or wounded around her.  This was a costly victory.  she radioed for medical assistance as she saw her men busy themselves with the wounded.  Well done trooper she said patting the Rocket launcher troopers helmet, some good shooting.  Lets get these wounded dealt with she yelled then we go to resupply, this is not the end.


looking down from the mothership Martian Warlord Martin was displeased.  Once more he had been failed.  This is enough! he went to the armoury and got his own personal force blade out..... I will show them how a Warlord leads he thought....

That was a great game, it could have swung either way, if I could have taken down Deke.  Its a fast playing game, always having to think ahead and I loved it even though I was beaten!  The range of the human weapons means I should have worked the cover more as I advanced, I was too eager to get close, and I did not expect Olivias dice to be brutal! or her to stand and fire, I thought she would move into cover and bunker down, but she let rip like a Red coats firing line!