Skip to main content
Labels
Posted by Unknown May 01, 2015

I love the fact that each ship in the Star Trek Attack Wing range comes with its own mission. They all vary, so I thought it was about time I started playing some of the ones that I have.

I picked Destroy the Scimitar first.  It comes from the film Nemesis, which I really enjoyed.

The mission comes on the normal card, that is in the style of LCARS computer system from the show which I love. So lets see the mission.... 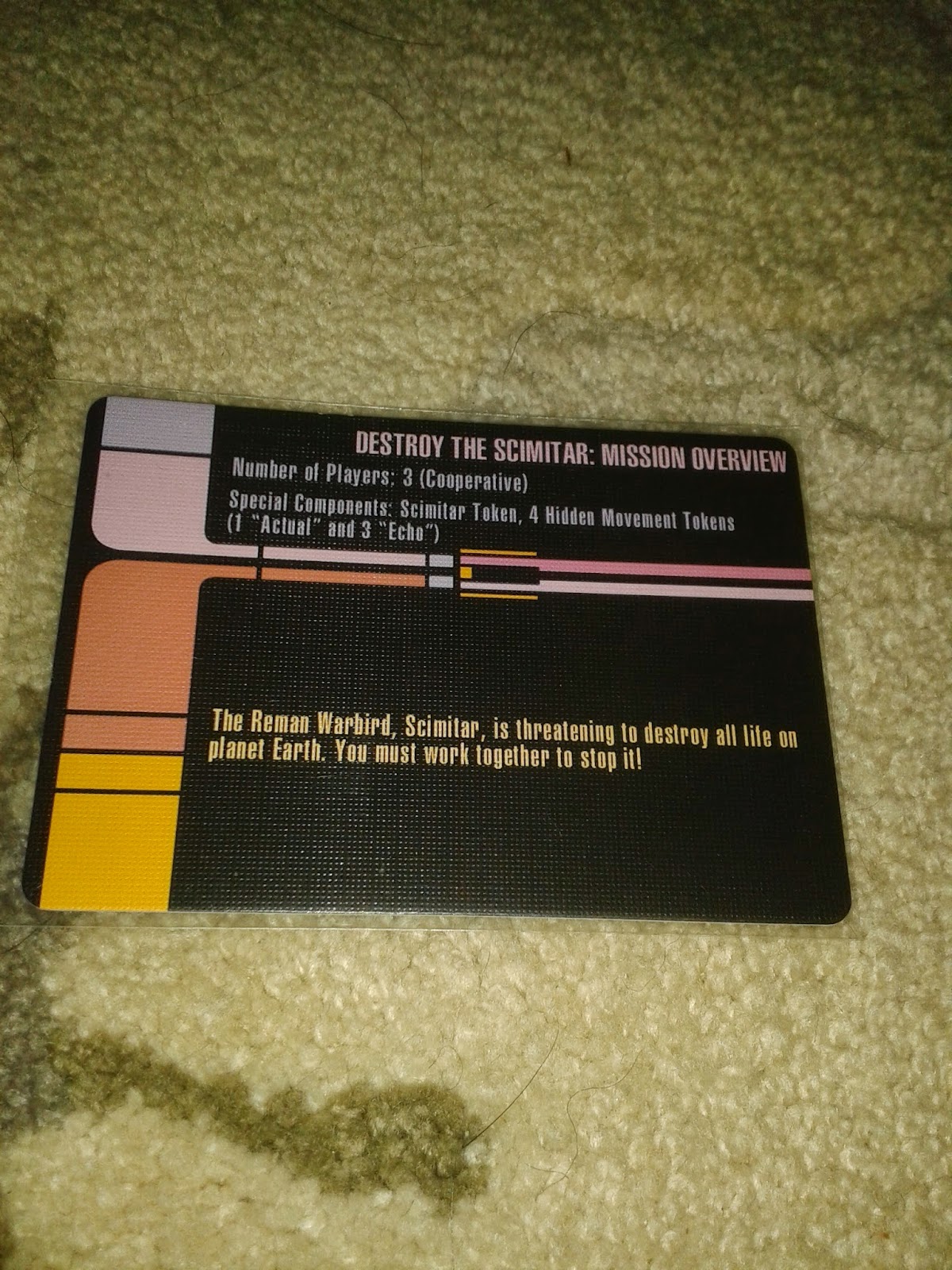 Here it shows you what you need to play. The mission came with the Valdore, and included the Scimitar and its tokens. 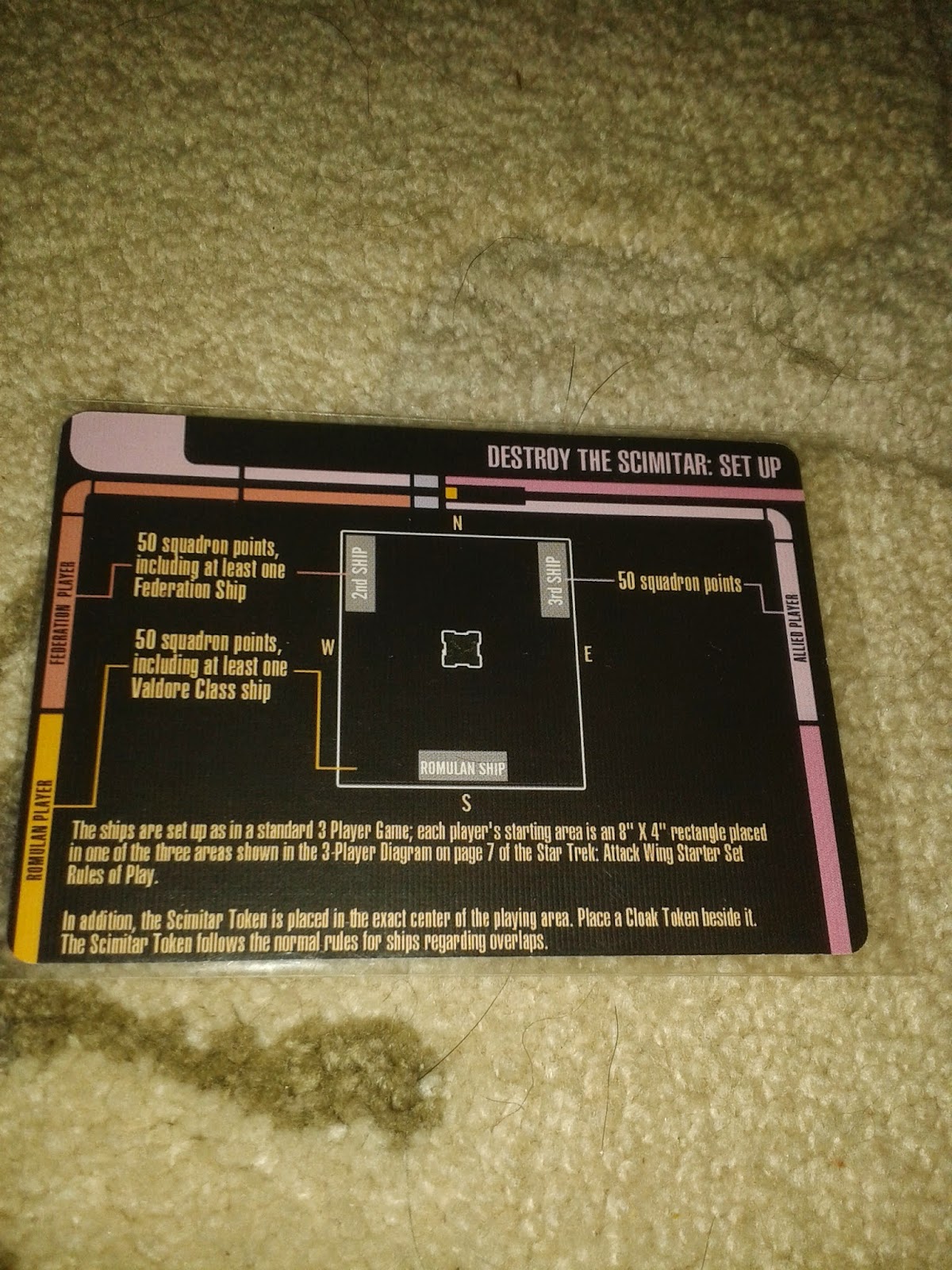 It gives you the full setup. 50 points to be spent on each ship, and the only requirements are that one is a Valdore class, and the other a Federation ship. But who would fill the last role? We shall see... 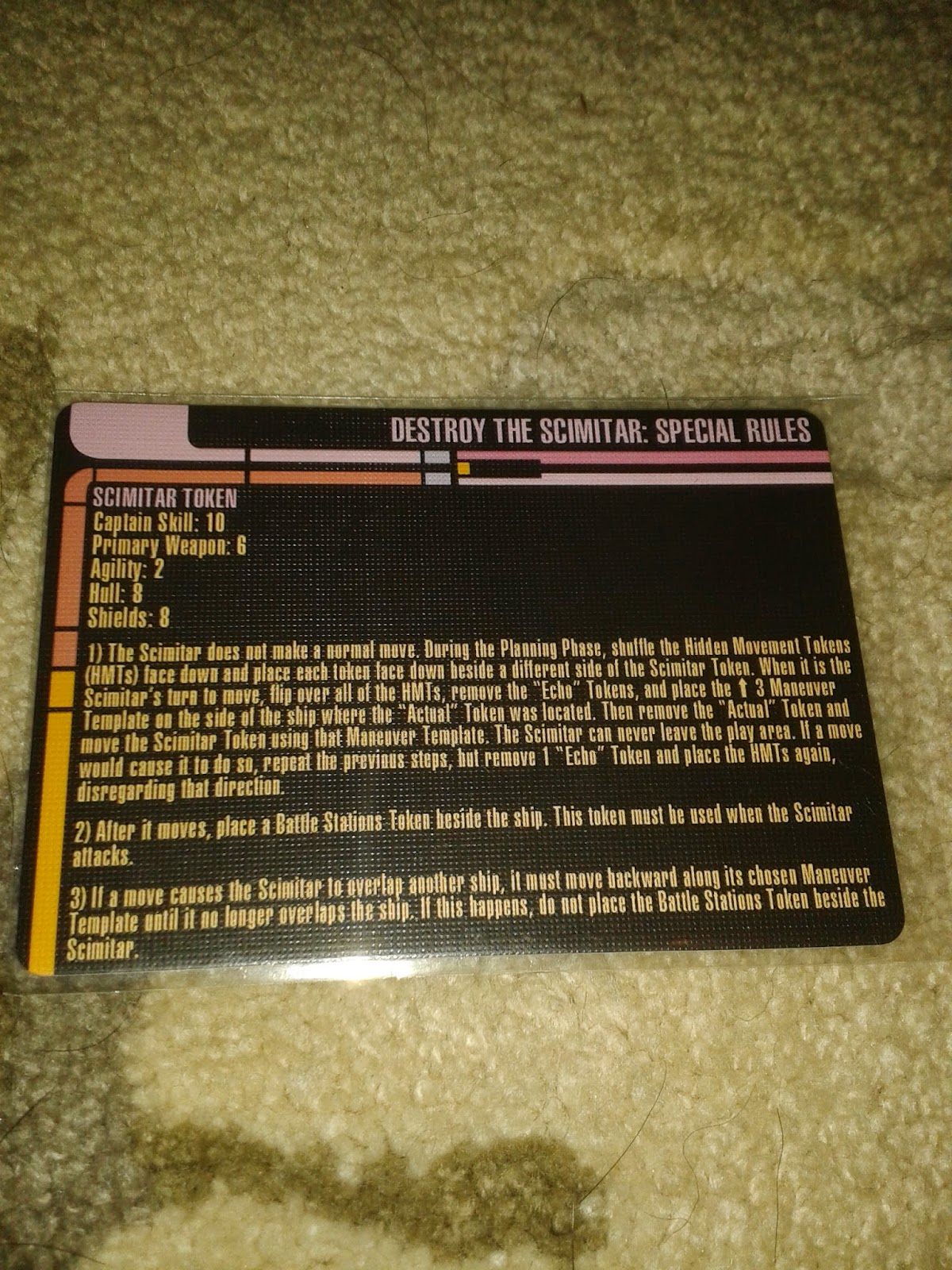 The Scimitar itself as you can see acts under its own AI which makes it a fun and unpredictable mission. Look at its stats... it's a predator! 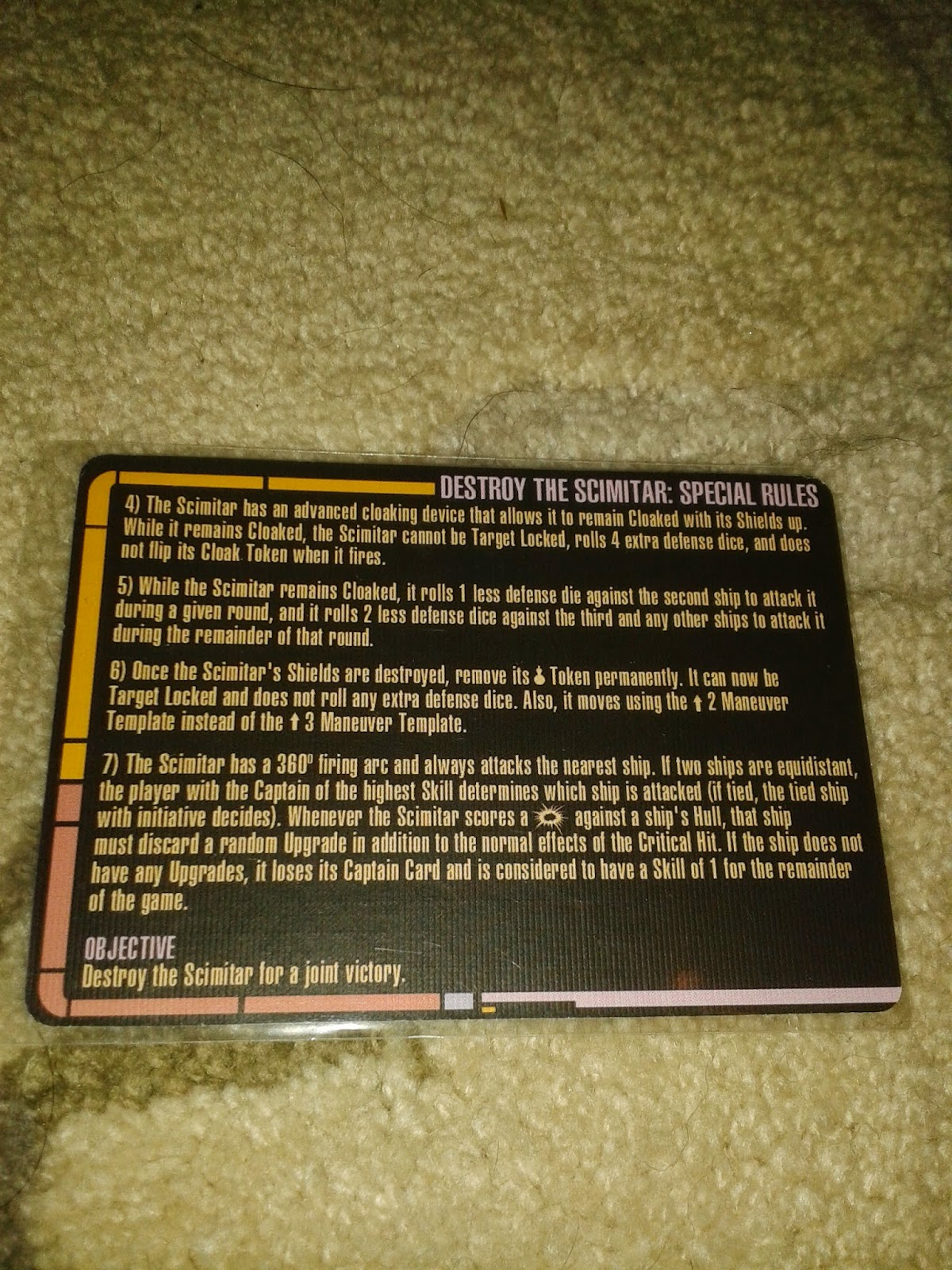 Its a simple objective here, destroy the ship. For that we need some forces.
Representing the Federation and under my control will be.... 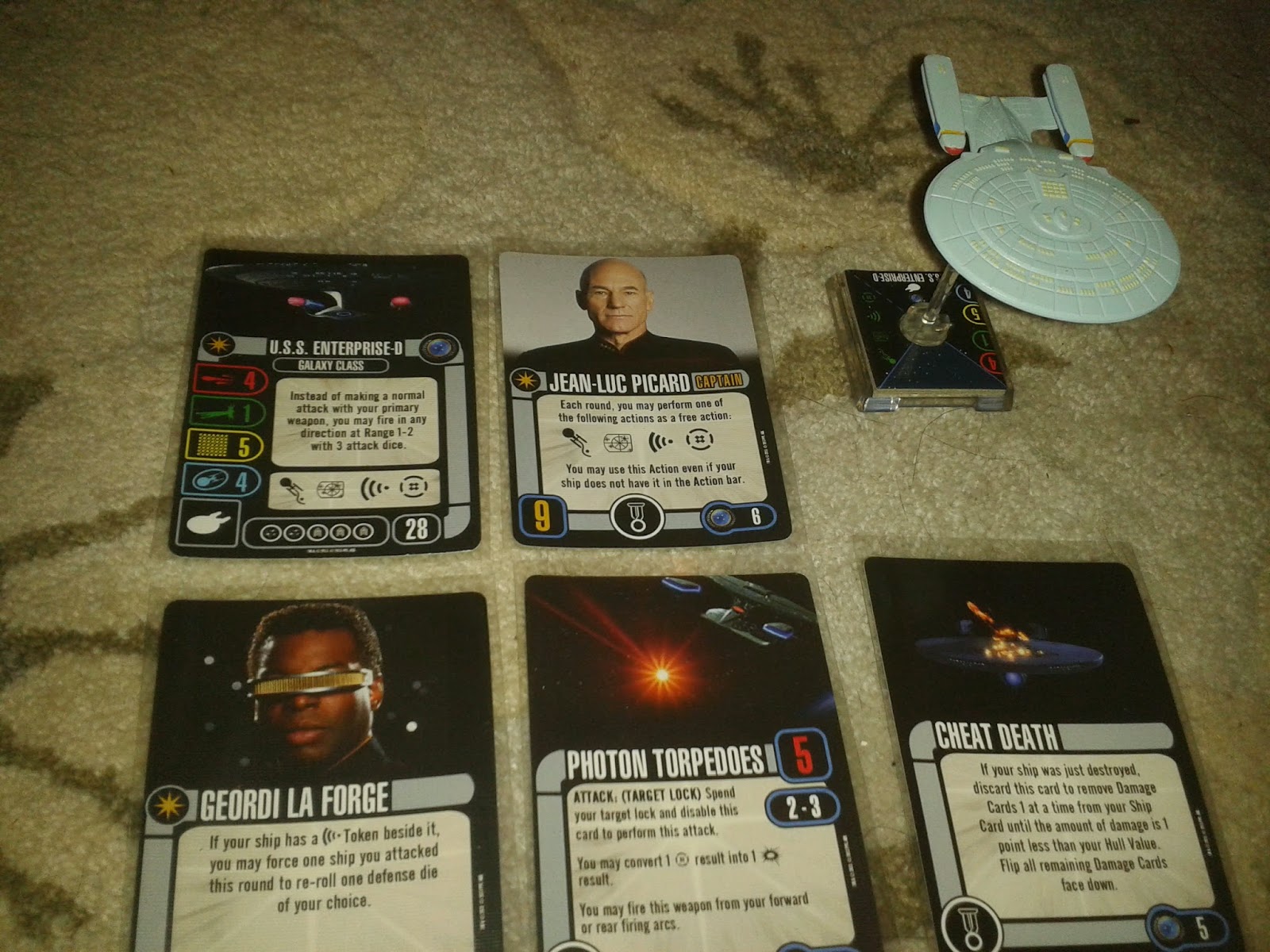 Jean-Luc Picard and the Enterprise-D. With Gerodi on board to hopefully get more damage through, torpedoes for when the Scimitars cloak is down, and Cheat Death as Picard's elite talent to hopefully allow another round of shooting at the Scimitar.

Oliva took command of The Valdore 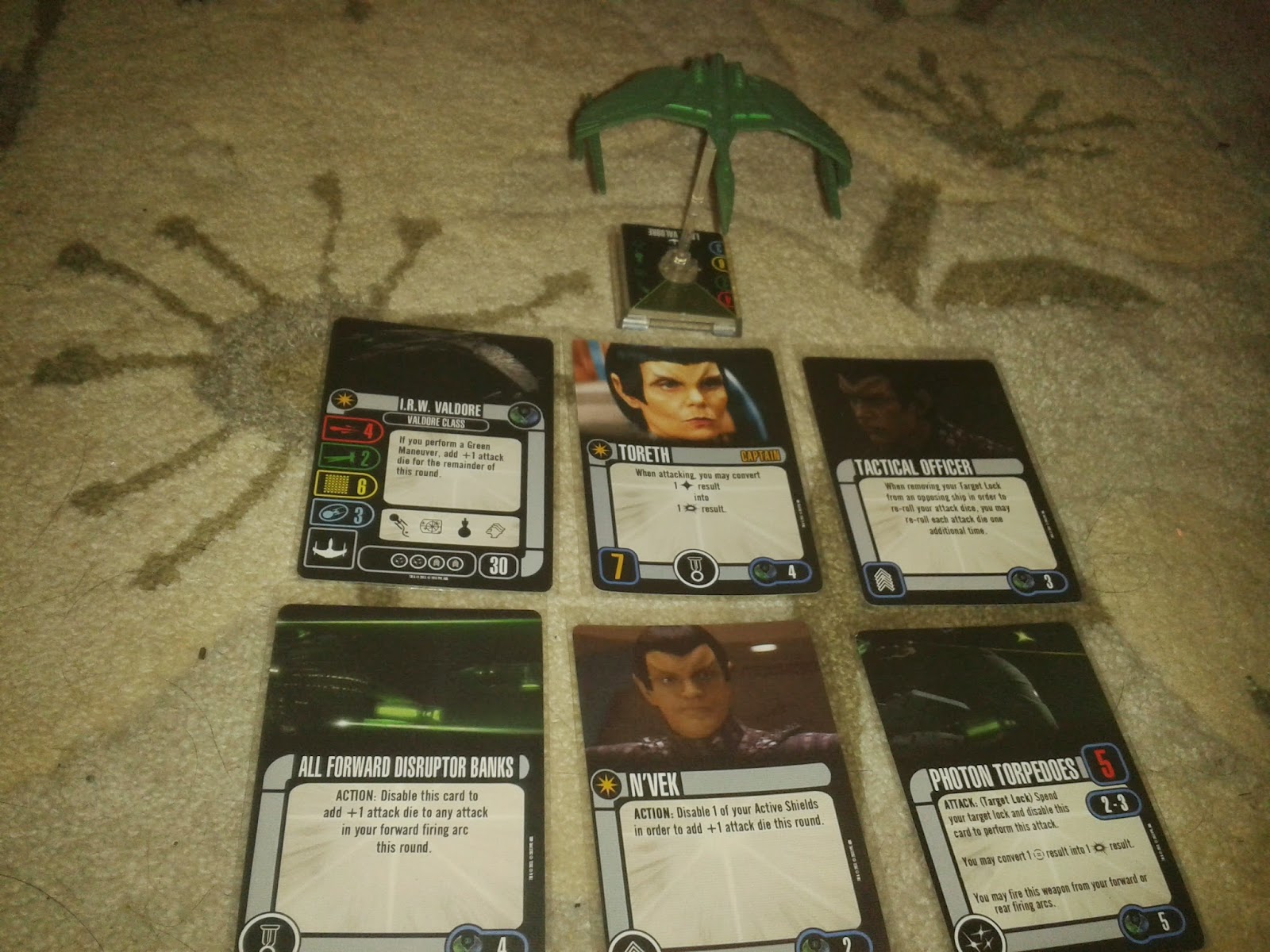 Toreth, provides more punch, and her ability of all forward disruptors combined with the Valdore getting an extra dice on a green move means potentially she can throw 6 dice, 7 at range one! And Tactical Officer means you get re-rolls from Target Lock (which can only be used when the shields are gone from the Scimitar).

Then the final ship also under my control, the Maht-T`a 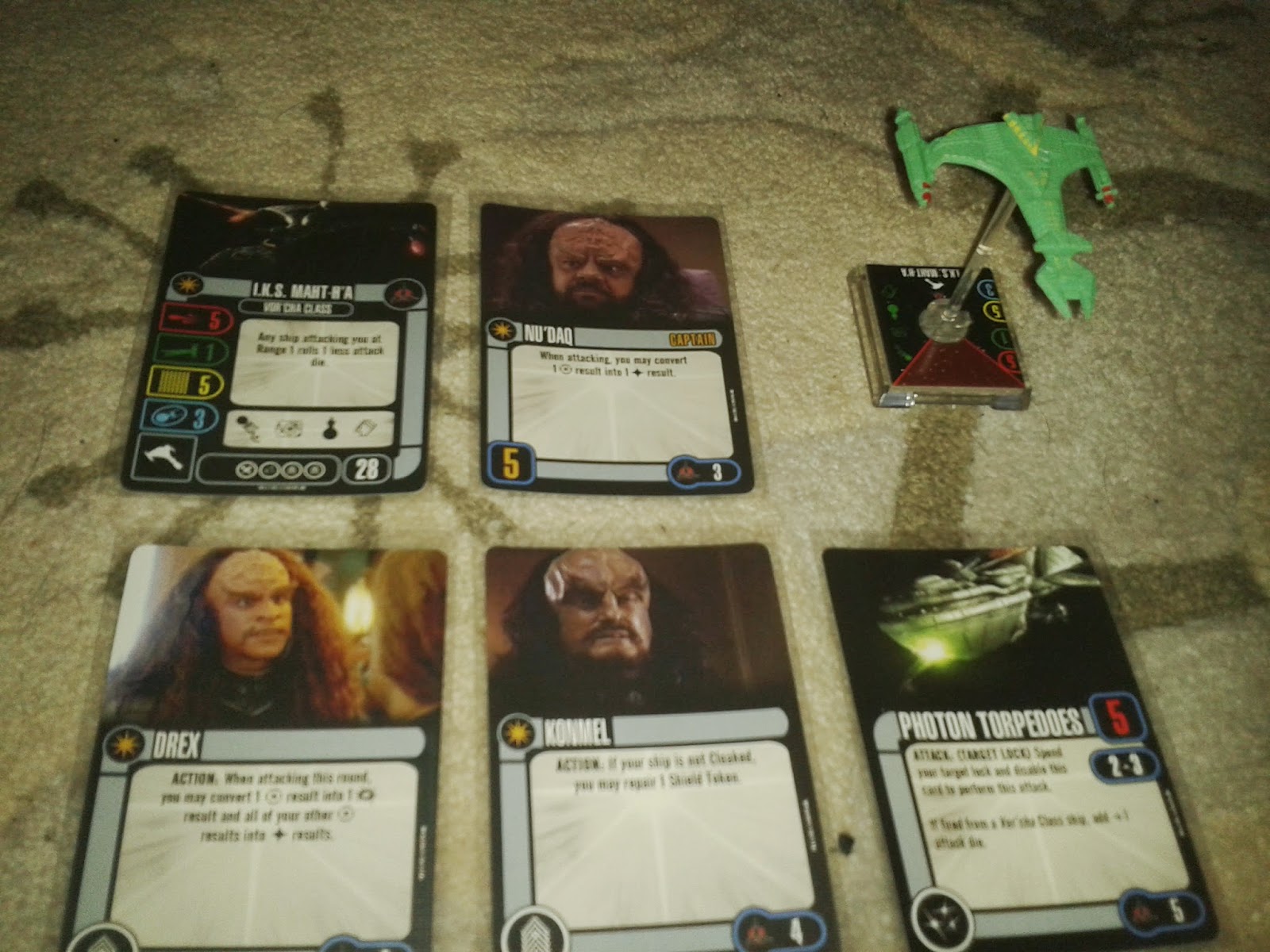 With Nu`Daqs in built ability to add offense, the fact the Maht-Ta makes it attacker roll one less one dice at range one, and with Drex giving a battlestations action usually unavailable to Klingons.  It means the Maht-H`a wants to close and fire hard at point blank range. 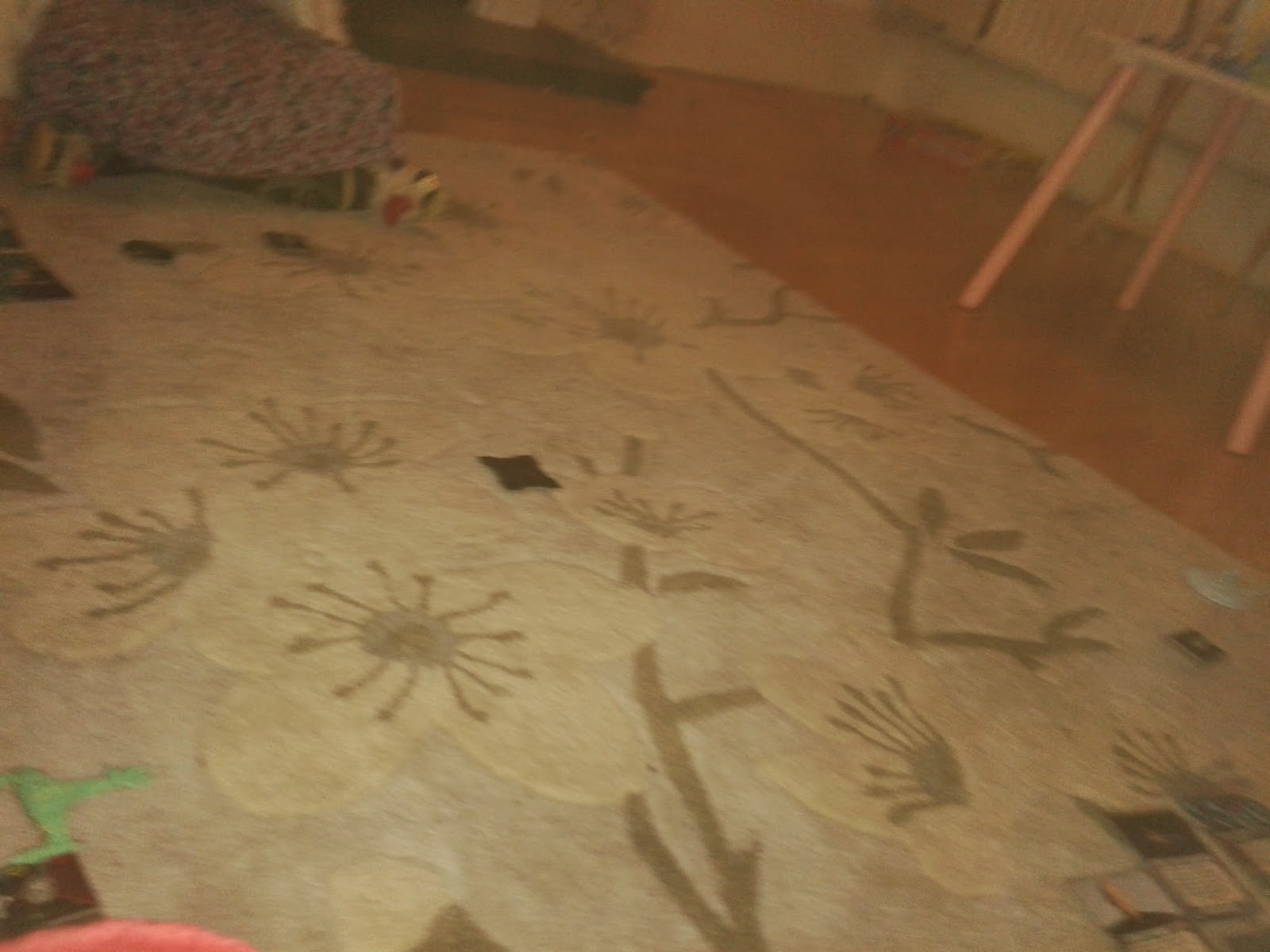 Initial setup.  The Valdore in the north and the Federation and Klingons in the south with the Scimitar set dead in the middle. 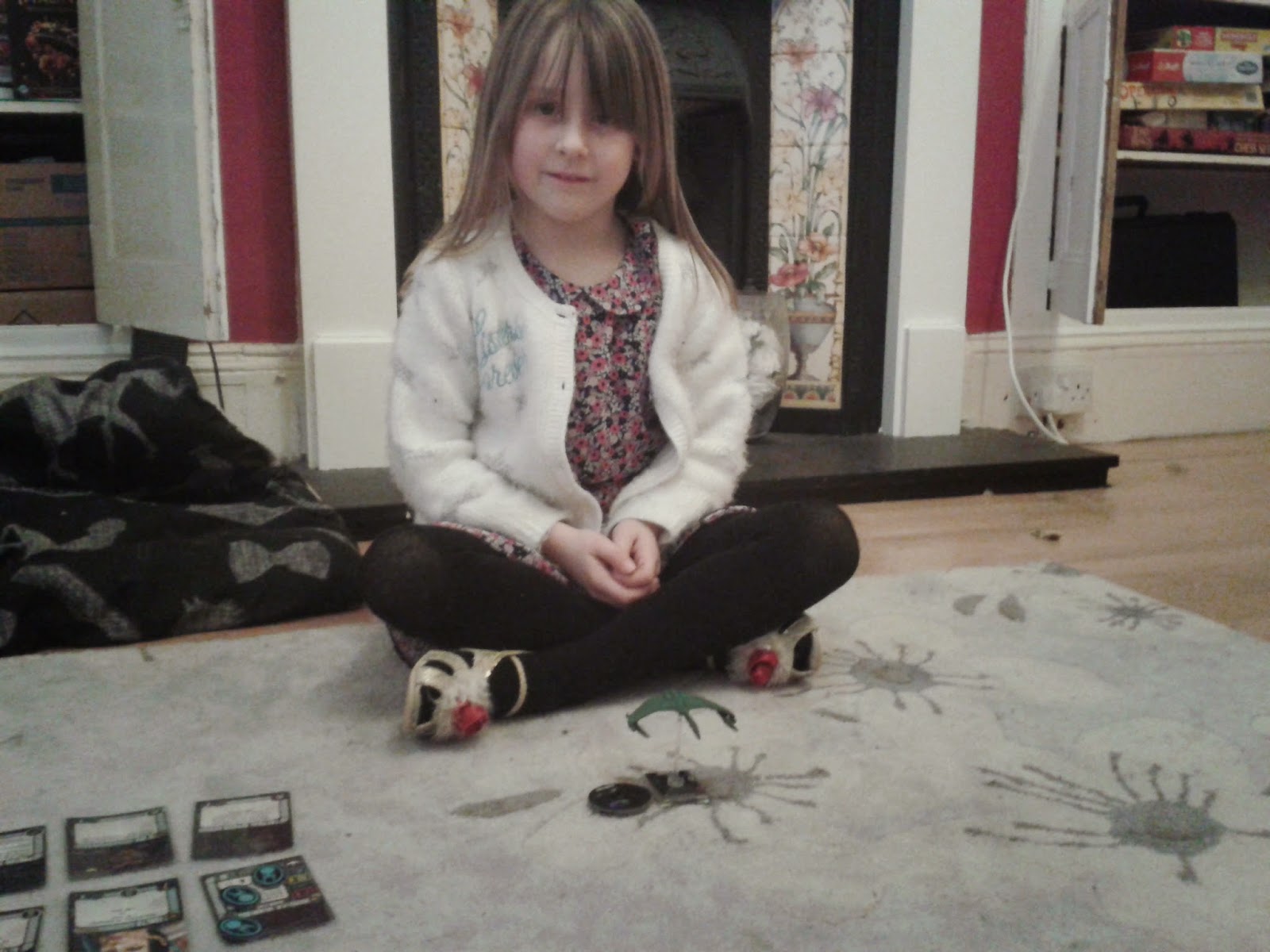 Olivia is all set for battle with her beloved Romulan ship. 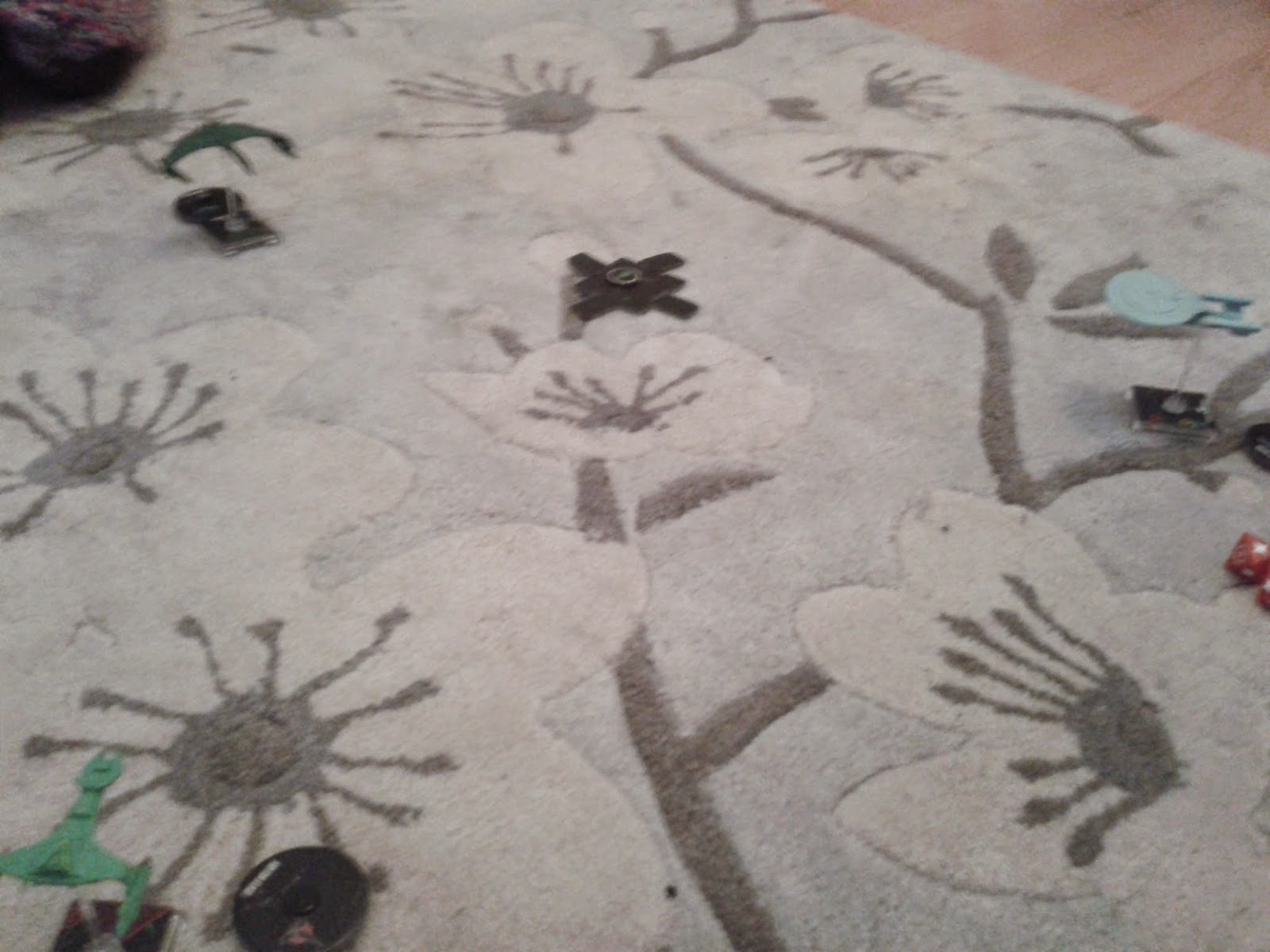 First blood is taken and returned! The Scimitar fires stripping the Valdore of its shields.  The enterprise and Valdore between them take 3 shields down from the Scimitar.  The Klingons are still not in range to fire. 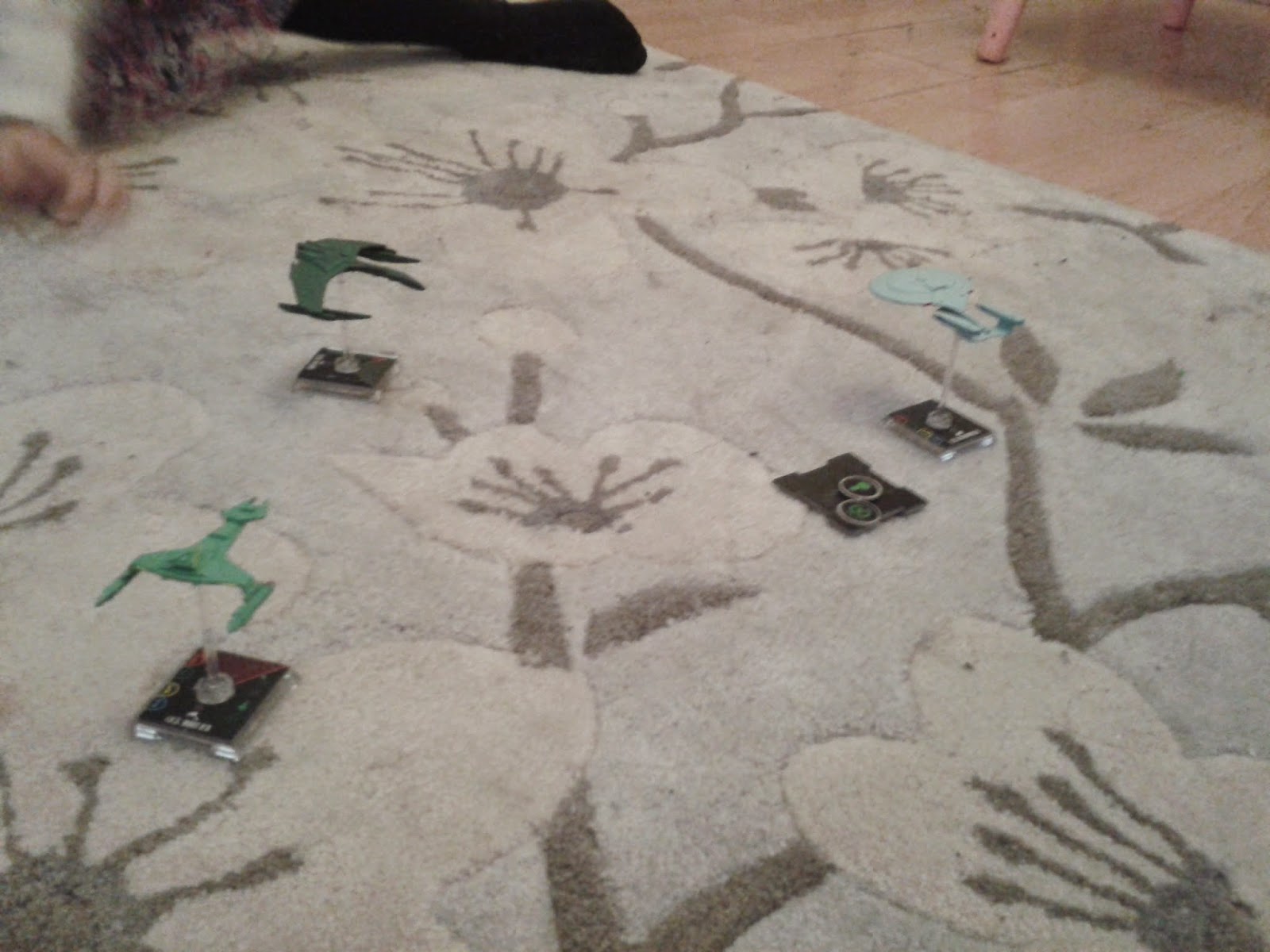 The Scimitar moves right next to the enterprise and hits with a devastating punch doing 7 damage. dropping the Enterprises shield and badly hurting the hull, fortunately none where criticals! The return fire from the 3 Alliance ships strips another 3 shields from the Scimitar. 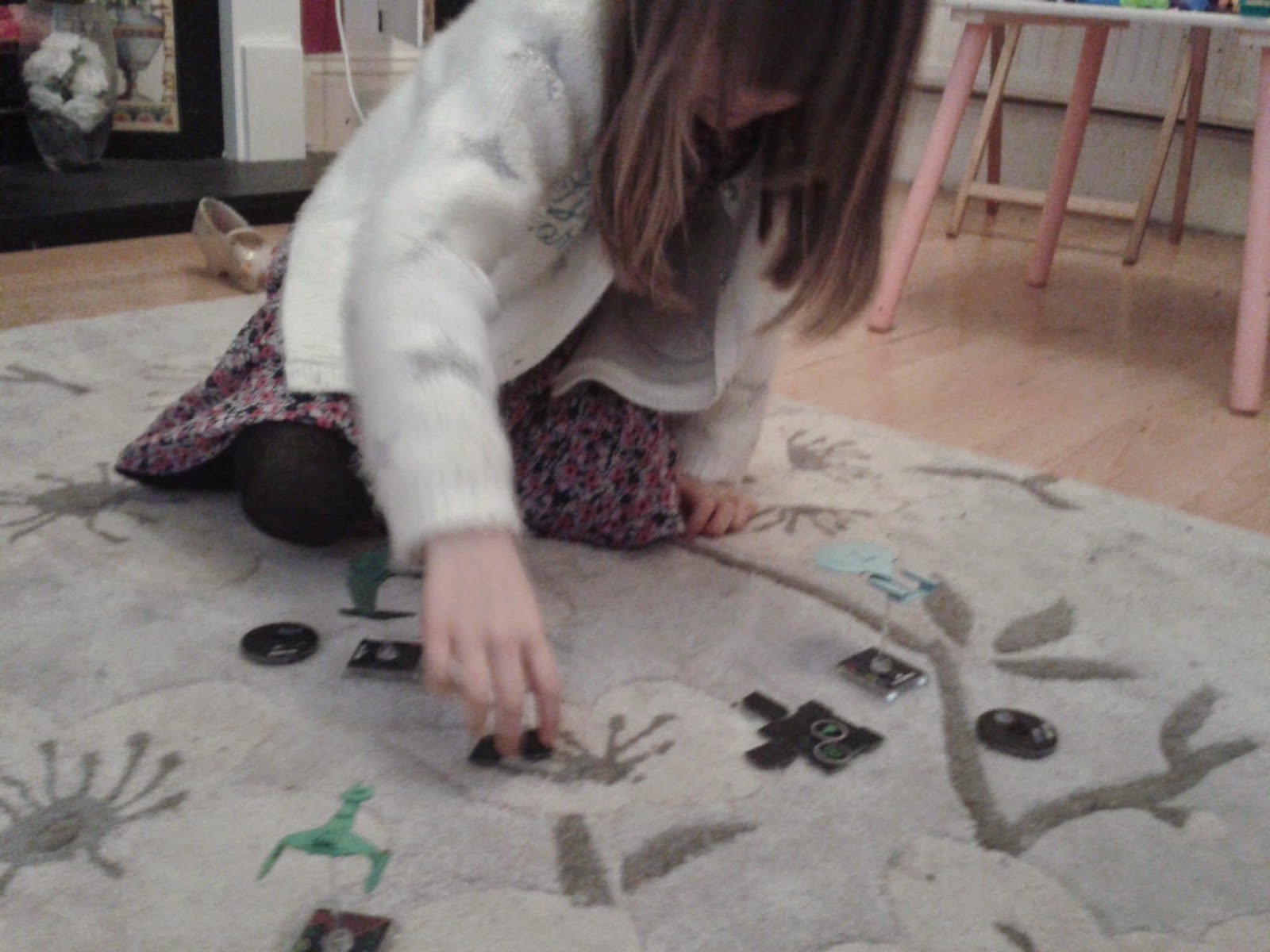 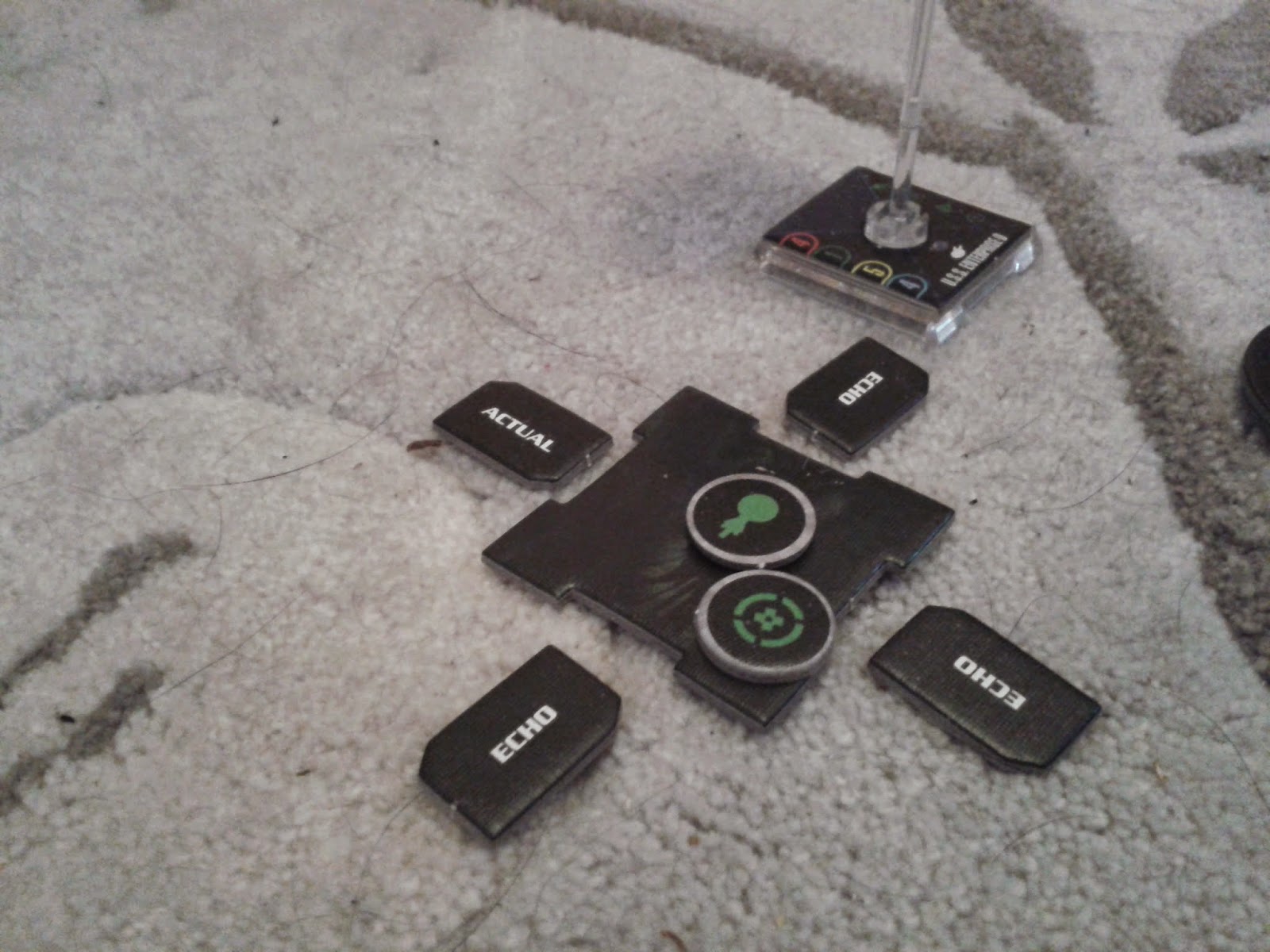 You mix them up then apply face down at random.  Then when you flip up the Actual move that's where it ends up. 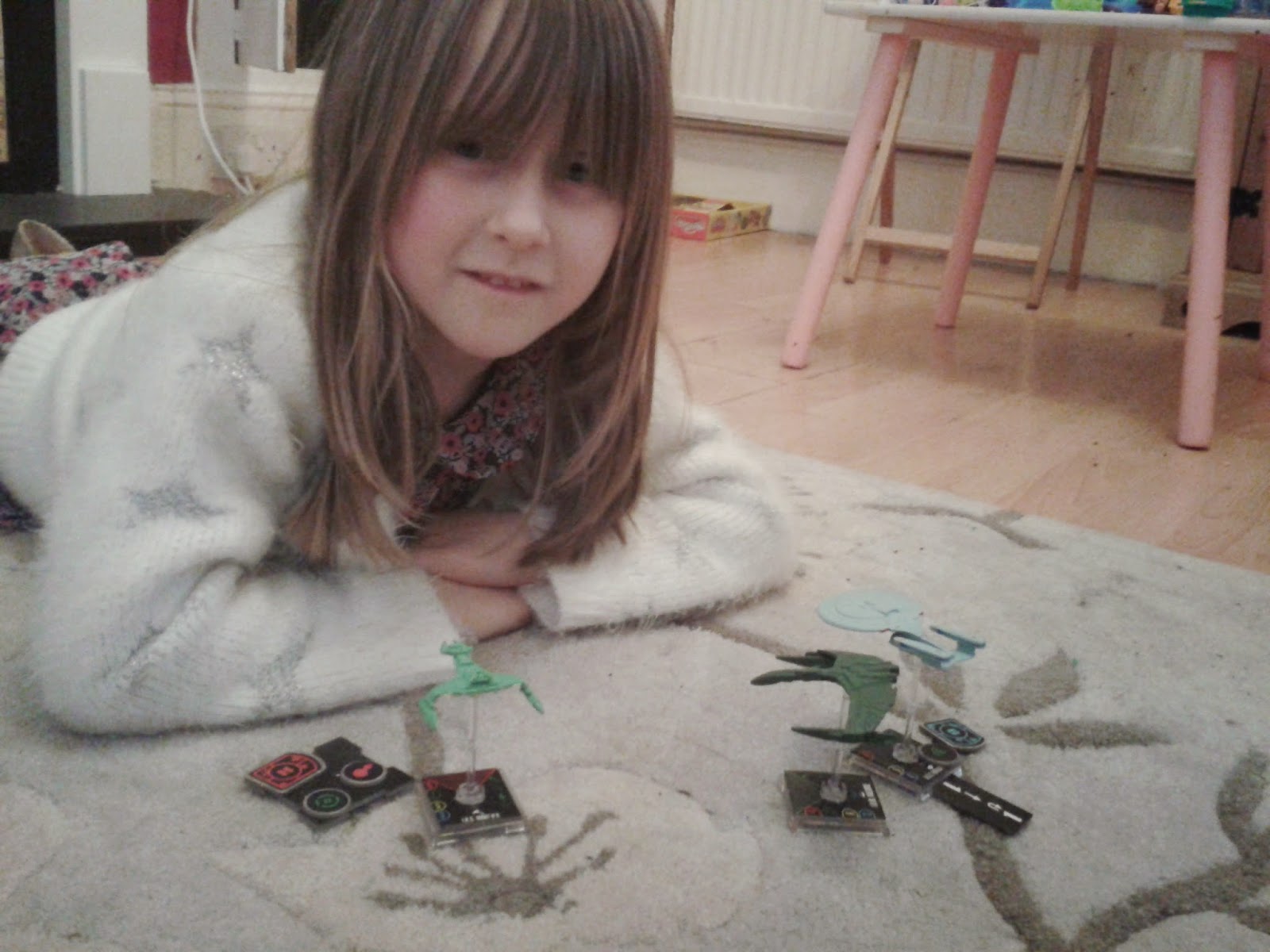 The Scimitar hits the Klingons for 5 damage leaving the ship reeling.  Enterprise fires and does 4 damage to the Scimitar stripping her shields so she can't cloak. Now she is at 6 hull! Olivia looks at me, "maybe we can win" she says. It's possible. The Enterprise is close to death, the Klingon ship won't take another round, and the Valdore has no shields.  The Valdore uses the all forward disruptor banks to boost her fire but only gets one hit on the Valdore.  This could go wrong!! 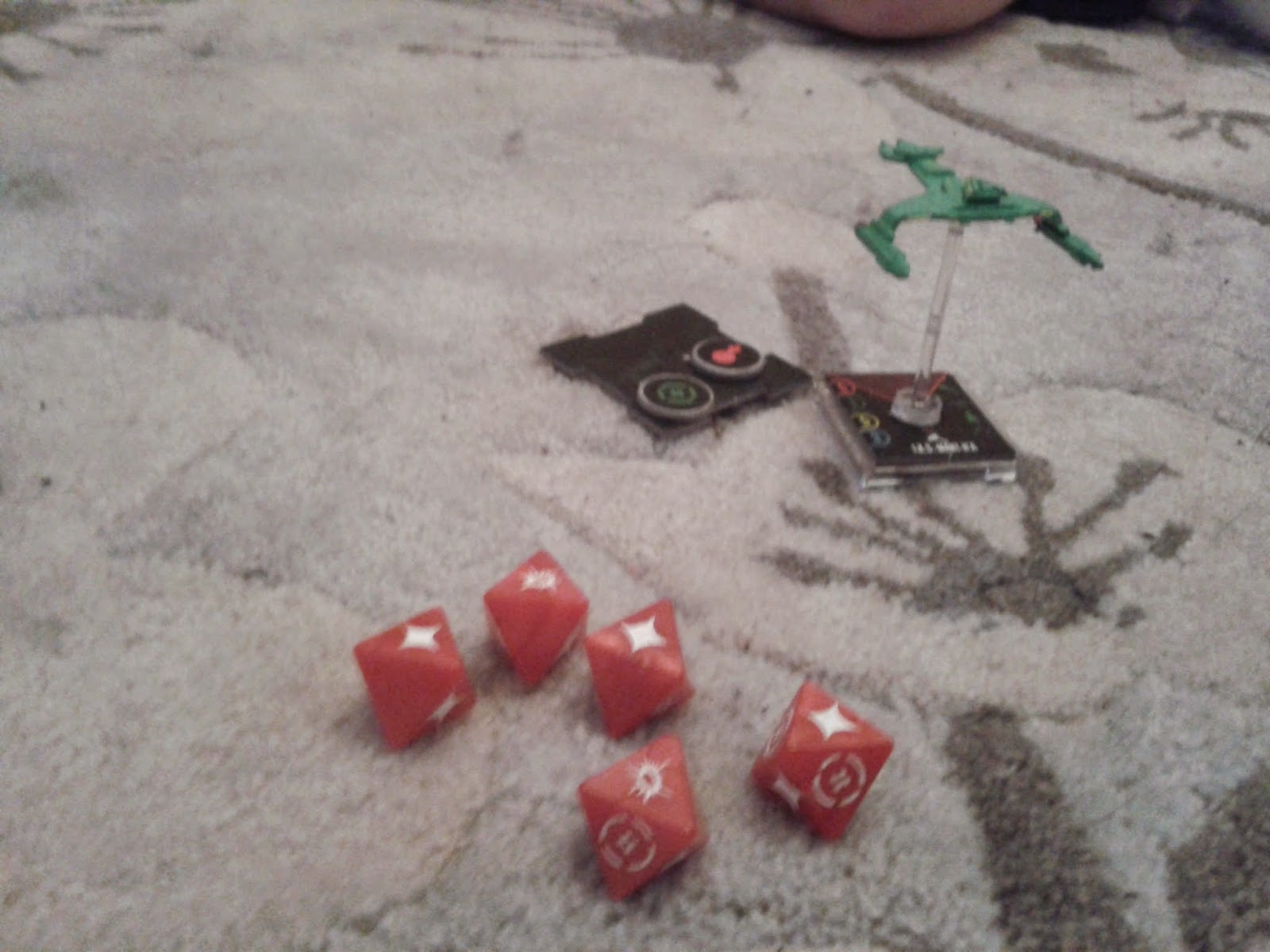 Last to fire is the Maht-Ta and she hits the Scimitar brutally, the Reman warbird whiffs the defence rolls and....

Earth is saved by the Alliance! The Scimitar is blown into scrap.

Olivia said this mission was the most fun she has had playing Attack Wing, she liked working together, and the unpredictability of the Scimitar.  Was a great game, fun, thematic. I thought the Enterprise was going down, but when the Scimitar moved away and other ships got closer it saved it as the Scimitar shoots the closest target.  None of the ships by the end would have really been able to survive another round of attack by the Scimitar.  It was a good fun exciting mission, everything a game should be!
Labels: Attack Wing Star Trek