Skip to main content
Labels
Posted by Unknown May 12, 2015

We had so much fun with our last battle report that we are going through with scenario 2 The Front line. 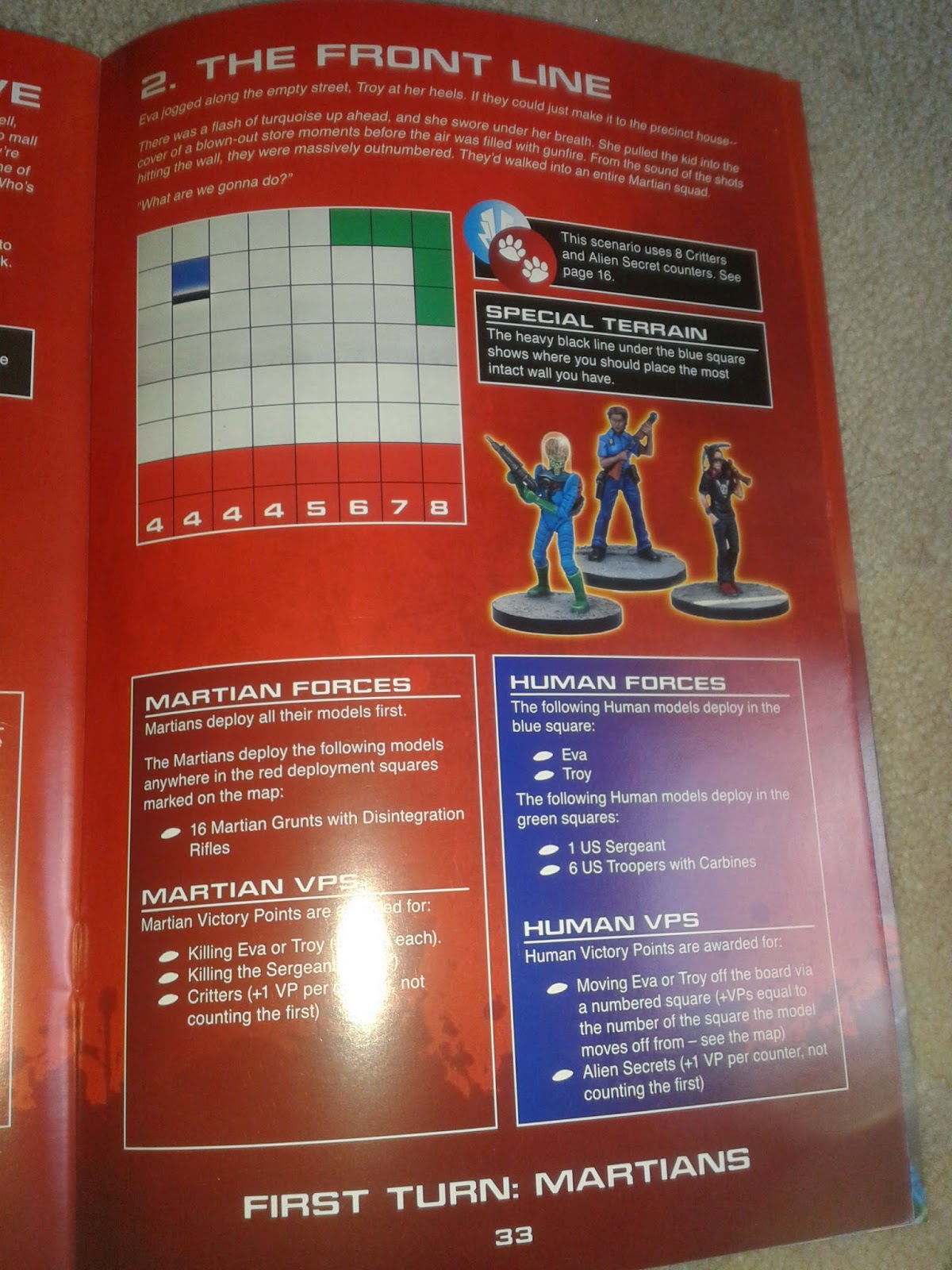 As  all the scenarios it gives all the set up information, rules and troops used.
We set up the board ready for action. 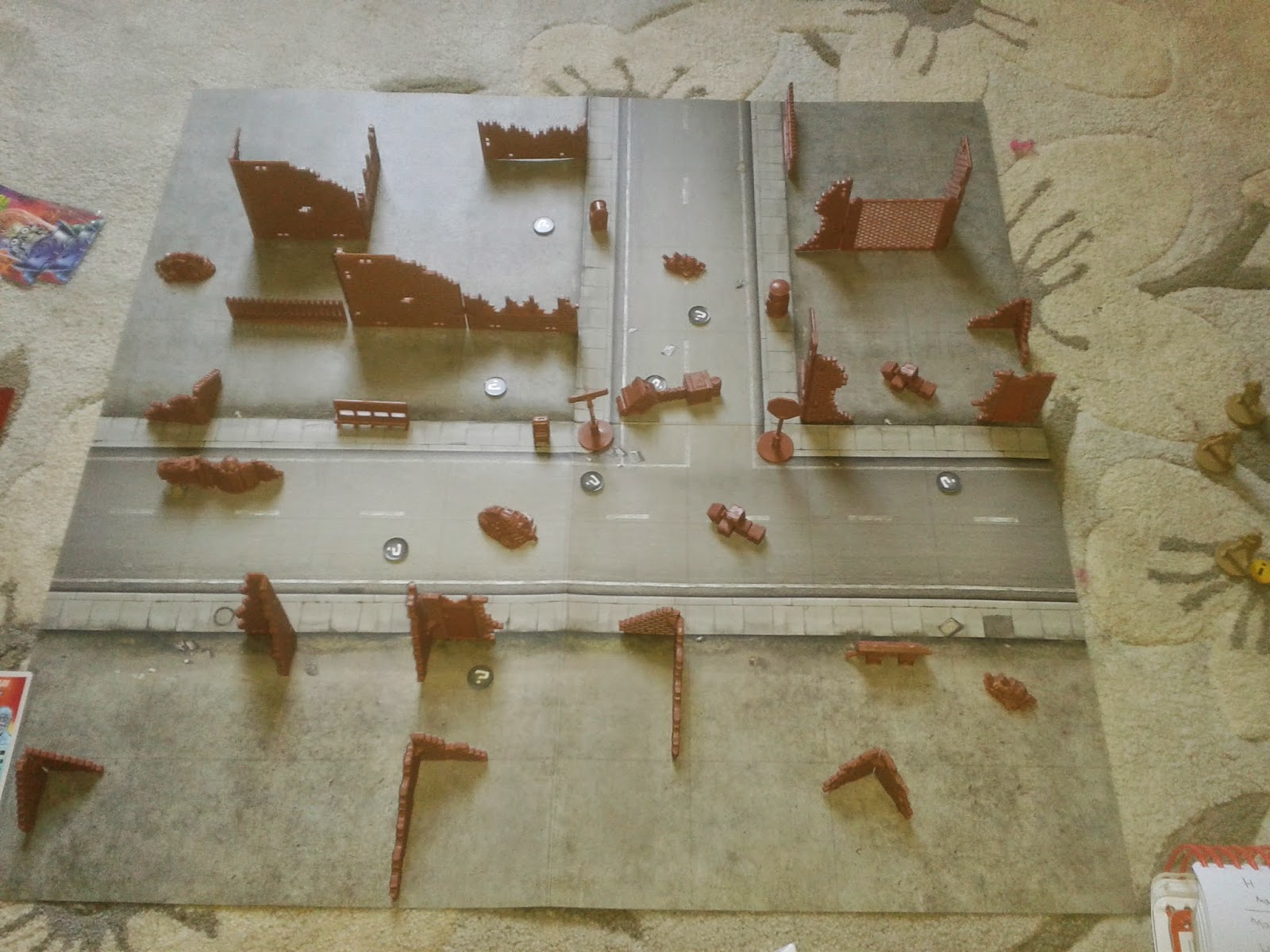 Randomly assigned the critter/tech tokens ready dealt our cards and prepared for battle.

I set the Martians up to block all the exit points on the board so I can then move where needed, Olivia set up the Heroes where the scenario stated, and her Troops in their deployment zone. 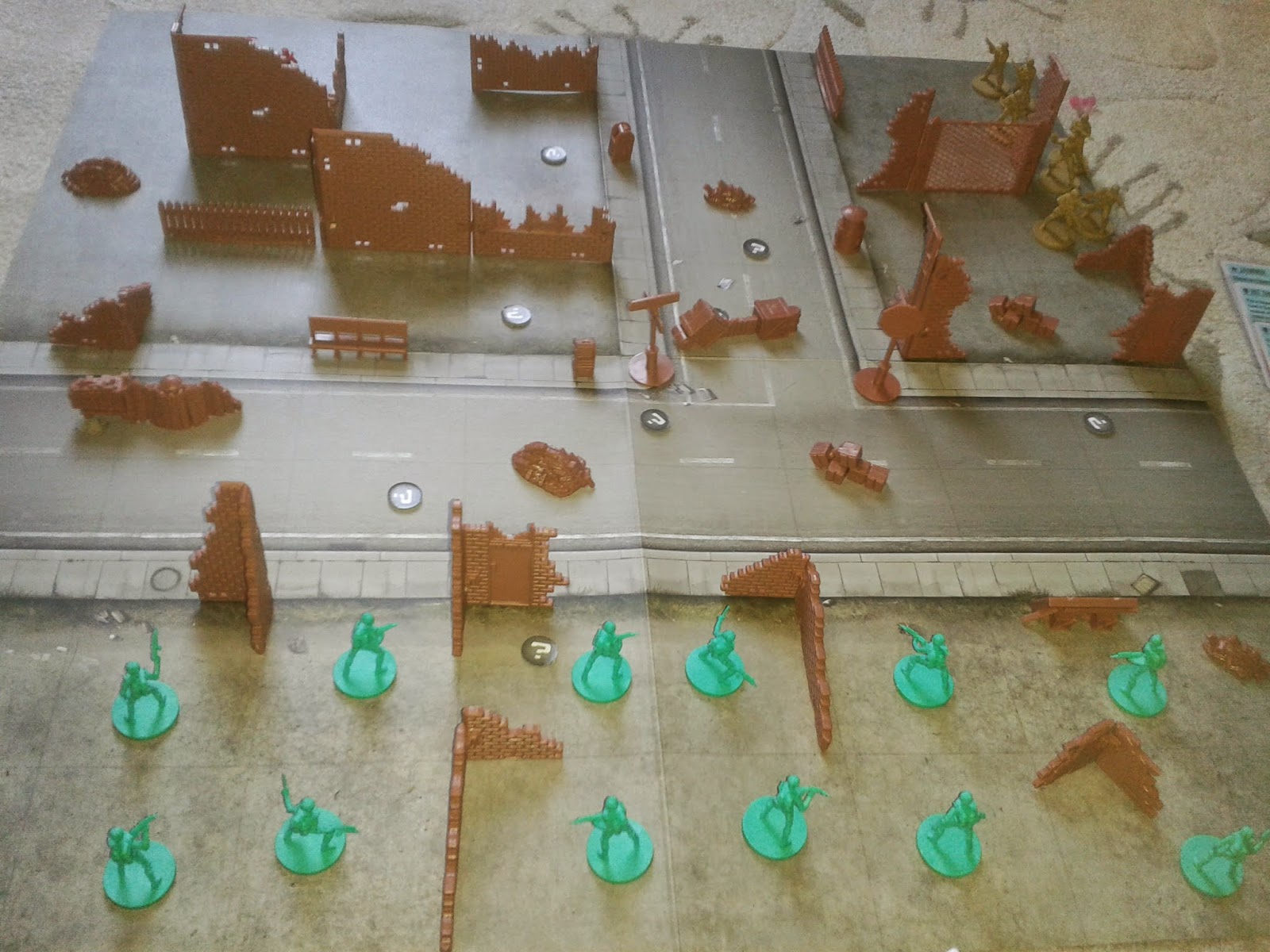 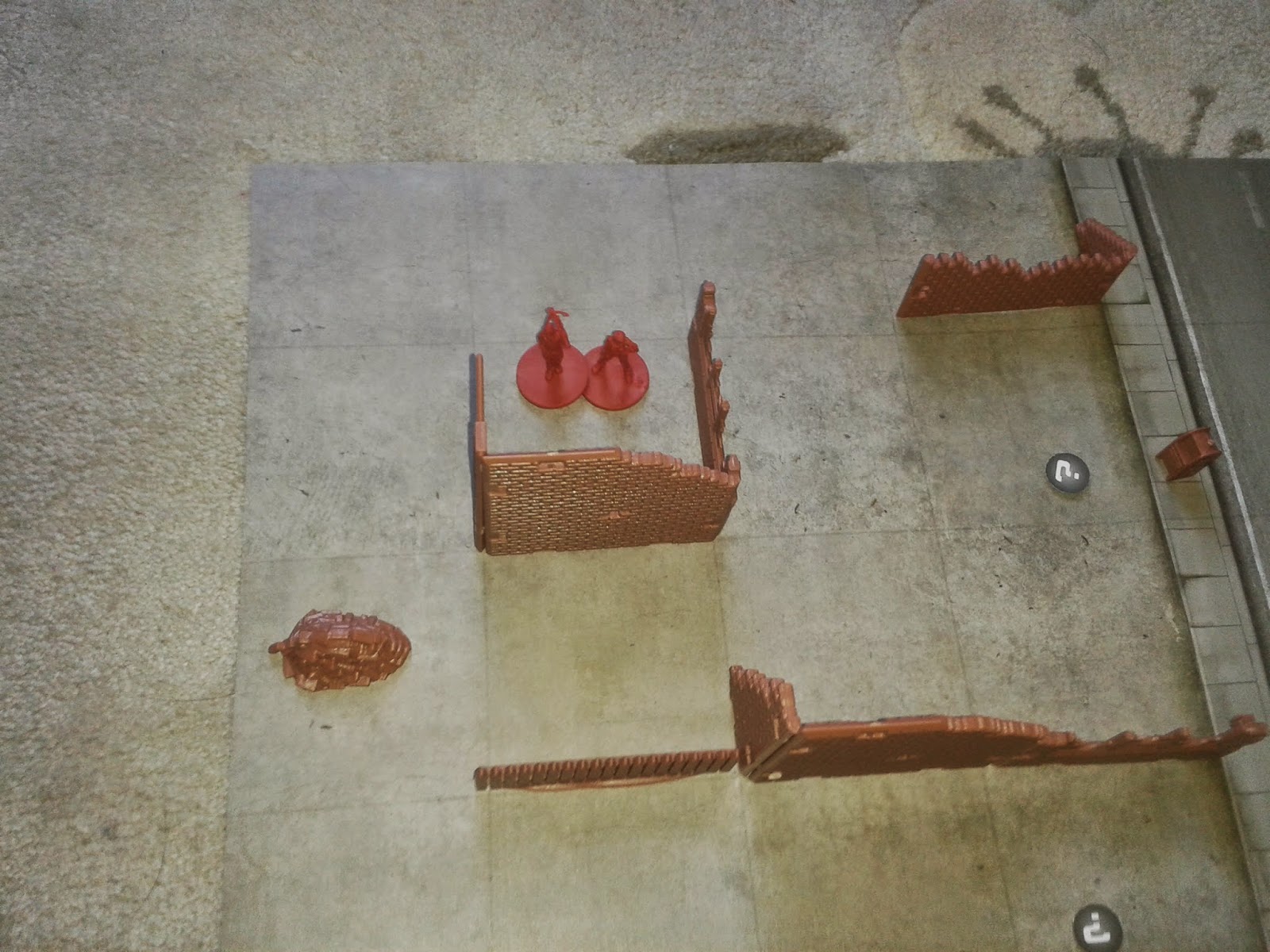 The Human side needed to win by Alien Tech, or moving the Heroes off the board in one of the scoring Zones shown in the Scenario.  As always you could win by wiping out your opponent.

These Patrols where never just simple Sergeant Olivia thought.  She had 6 Troopers with her, and was under to scout out the front.  As she rounded the corner she held her hand up to her following troops.... Martians she whispered...... lots of them.  As she settled behind cover she heard voices, human voices, a male and a female yelling at each other, something about which was the right way to go.  Looking over she saw two people in cover on the other side of the street, a female cop and some young punk teen.  Sighing she knew she had to help them get out of this or they walk into the Martian forces.  OVER HERE! she yelled out to them.  Hearing this the Martians turned their Disintegration rifles towards the soldiers.... Dammit, that's secrecy blown she thought.

Watching from the mother ships view device Martian Warlord Martin saw his grunts advance.... and two human civilians, they would make excellent test subjects he thought... capture, or kill them if you must he communicated. 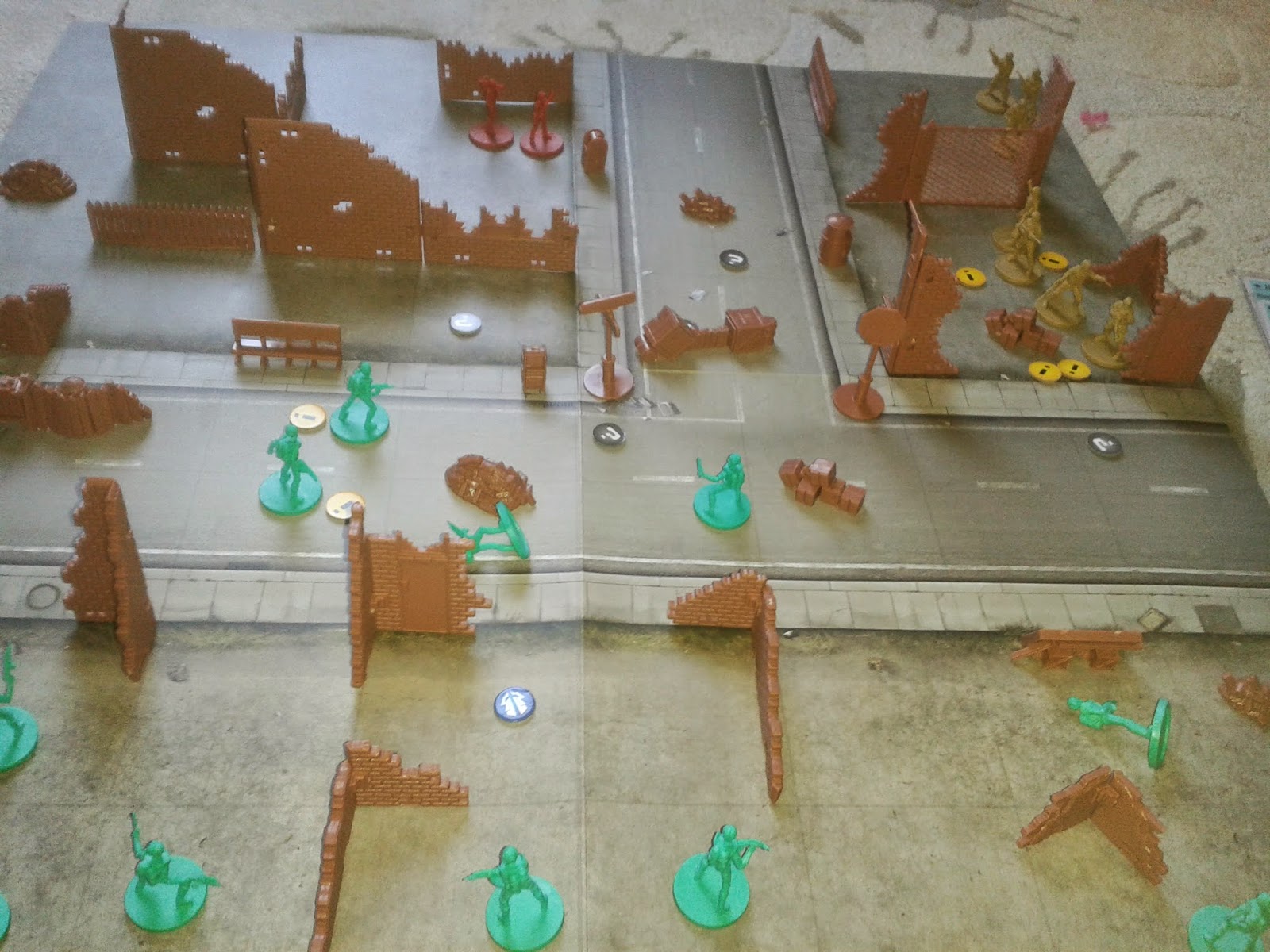 The Martians begun moving up to position, with the numbers on their side they thought they could take the enemy quick.  The heroes ran from cover and Eva lost a hero point from a martians shooting.  Standing in the open was not a good idea.  The troops moved down the flank killing a Martian and Rattling some.  Then they called in Harrasing Fire. 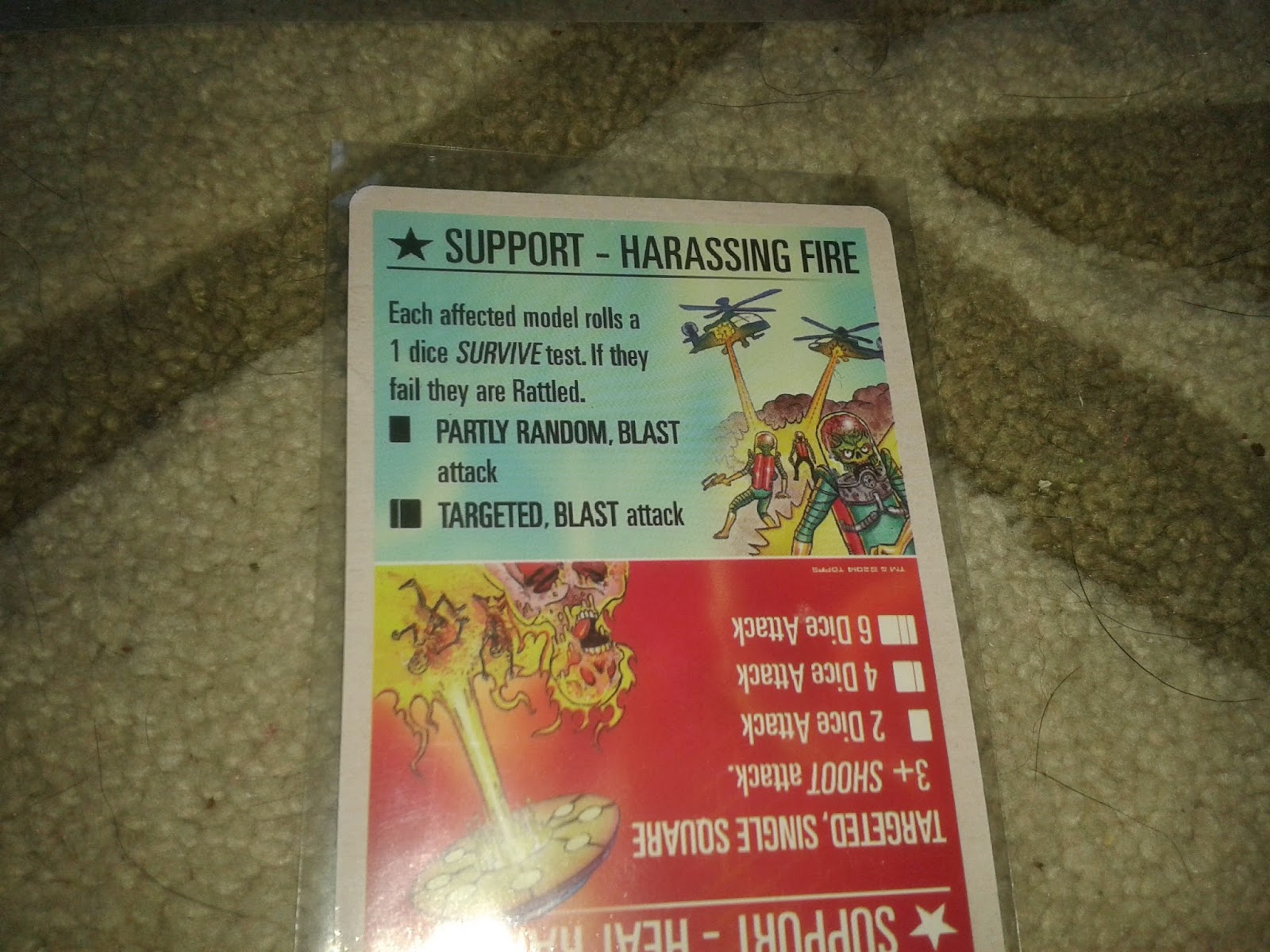 Lucky for the Martians it was not very successful. 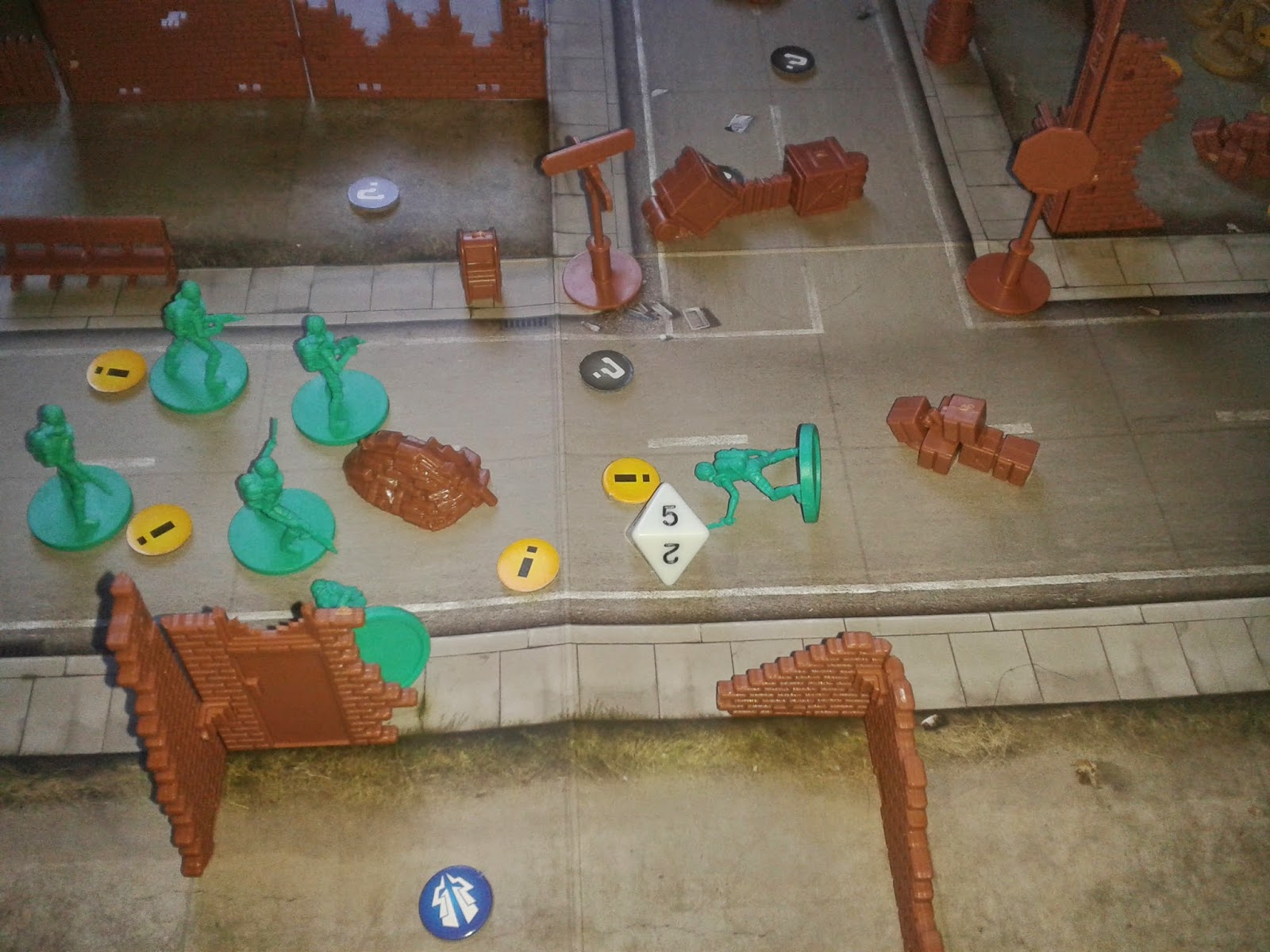 It could have gone a lot worse! 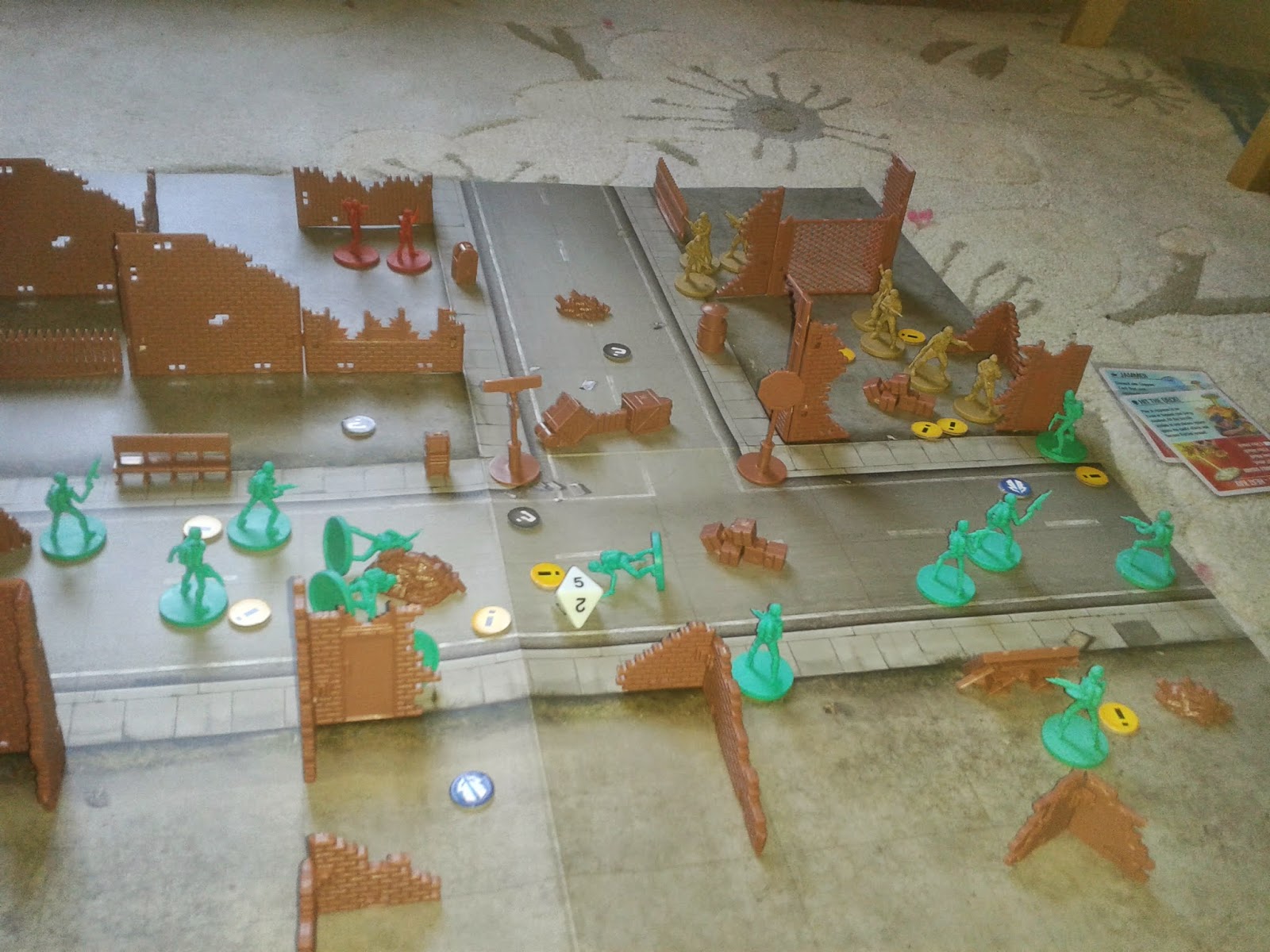 The Martians kept pushing up the centre to take the heroes out for a quick win, and some grunts to take out the Human troopers 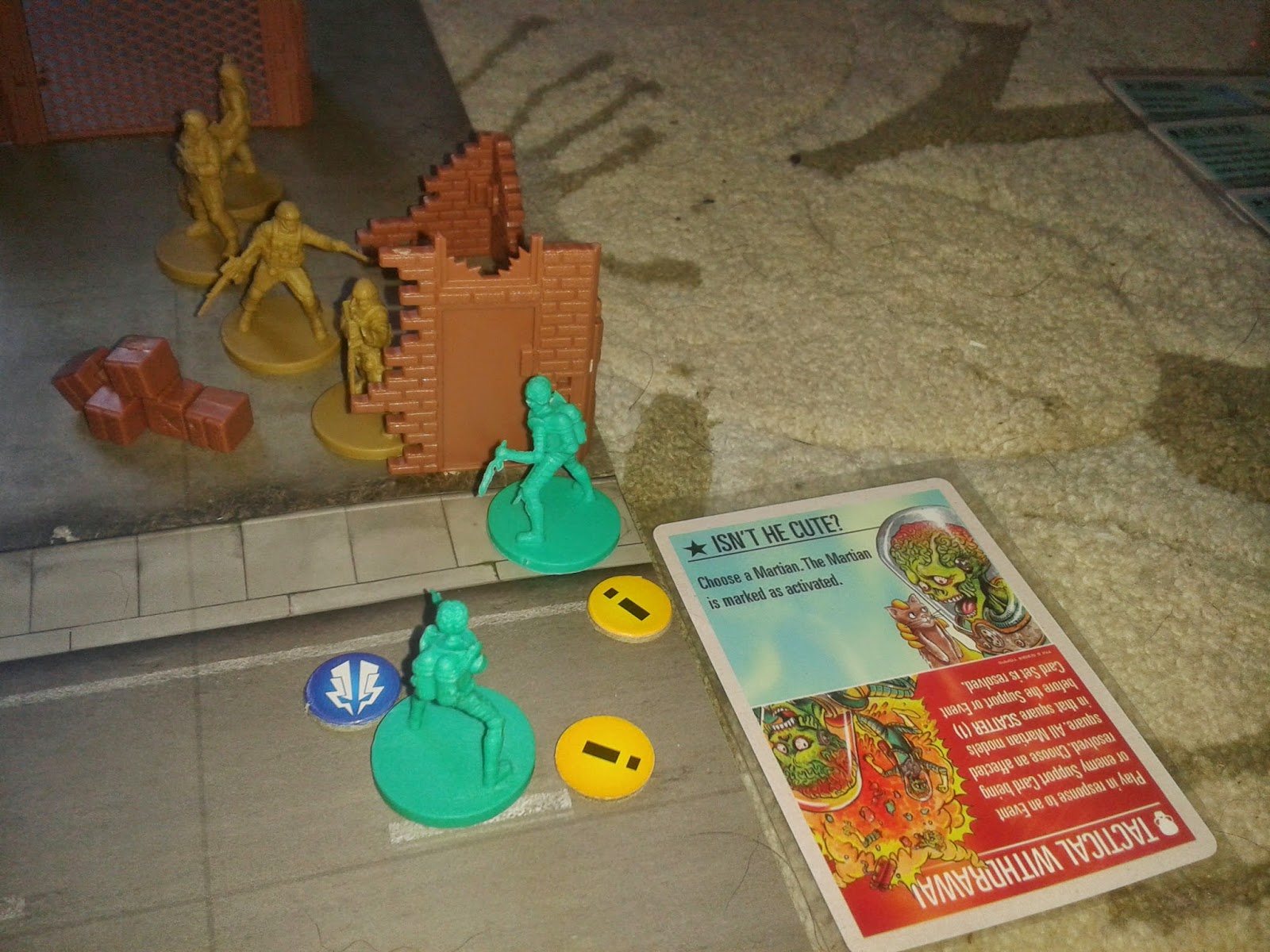 With the Martians in a good position to start assaulting the Humans Olivia playedisnt he cute, to take make the most likely Martian become already activated saving the assault for a turn or so. 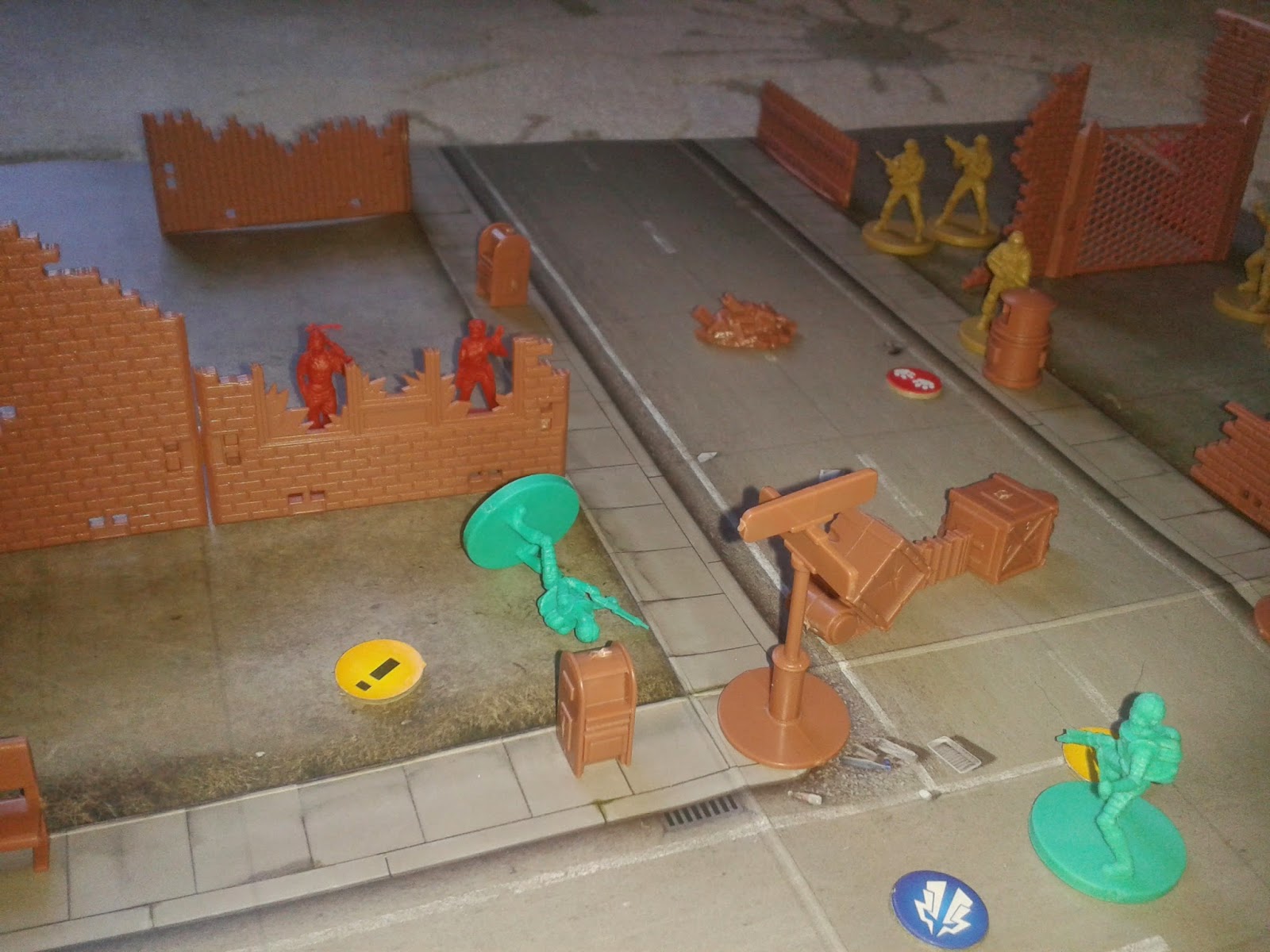 The Heroes wisely decided it was time to get into cover, Olivia decided running was not her style, so she tucked them up against the wall, and started ripping fire into the Martians.  If they where going down they where taking a load of Martians with them! 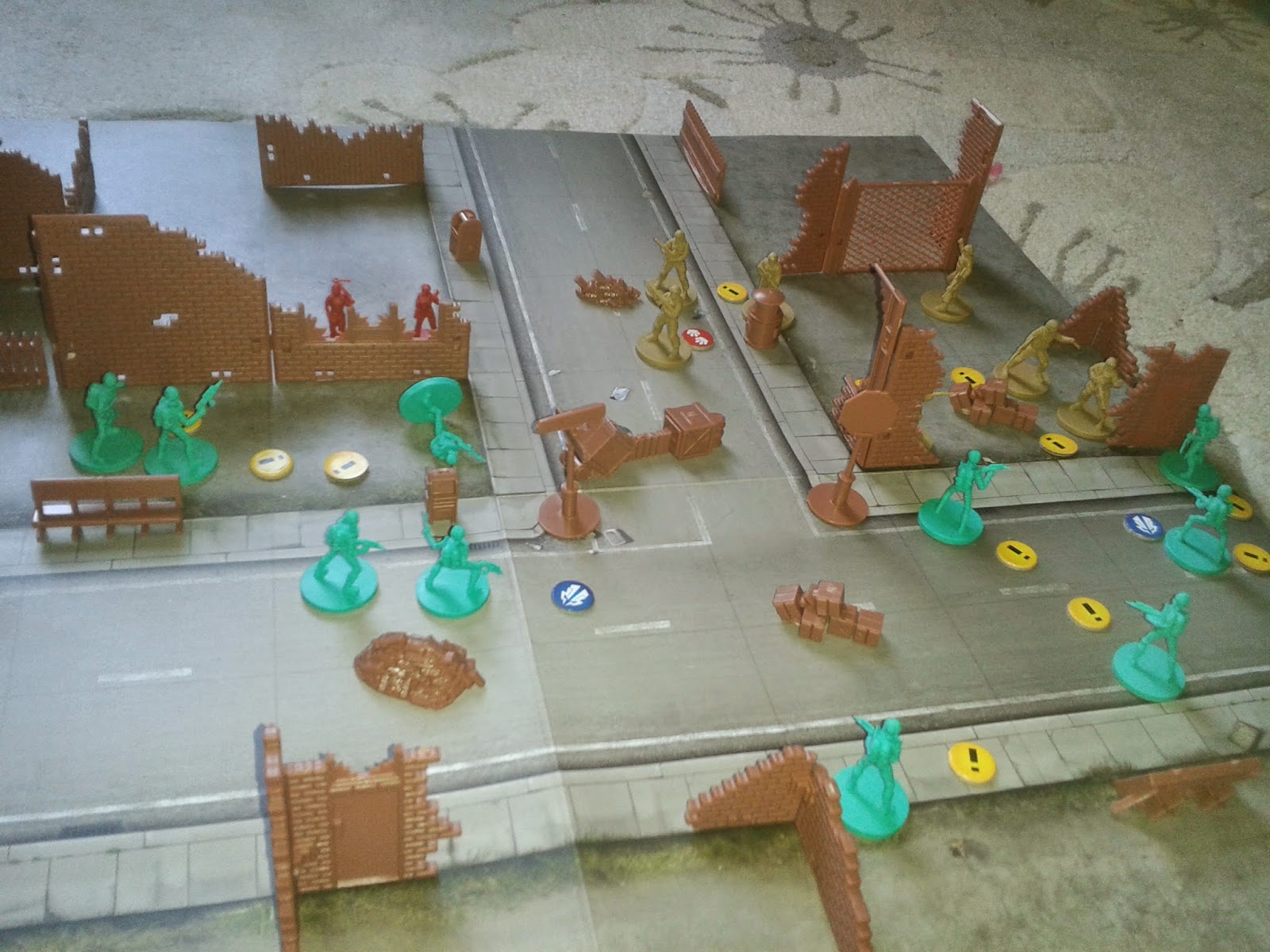 The Martians moved to swamp the Heroes, who kept ripping fire into them.  Olivia sent some troops over to help.  The Martians prepared to take the troopers in the corner out and swing round to mop up the Heroes. well that was the plan anyway.  But the Sergeant and his men where taking a heavy toll on the attackers 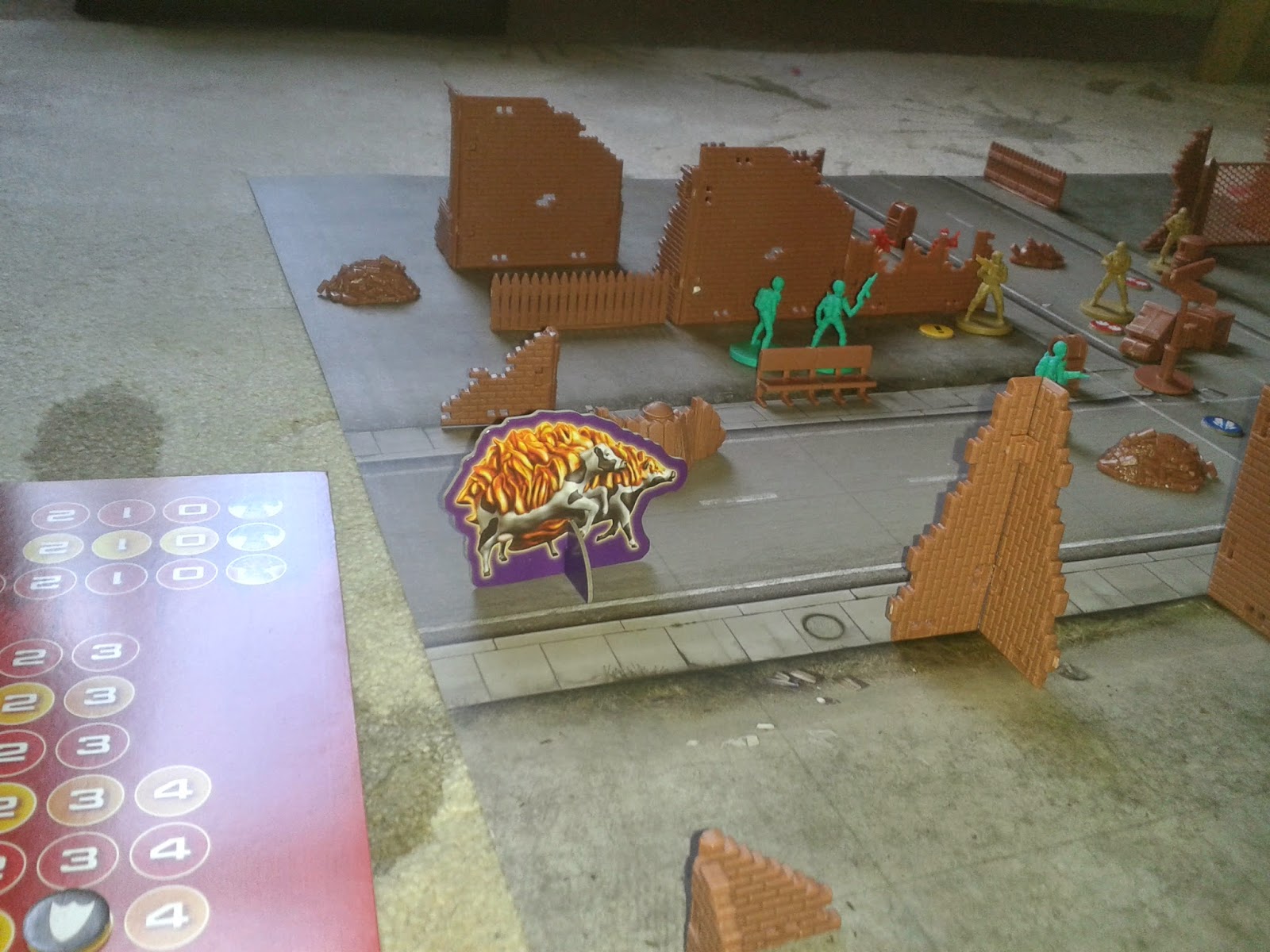 Burning cattle from further in the battle came running onto the field, this could be entertaining! they will move randomly next turn.  It could get messy 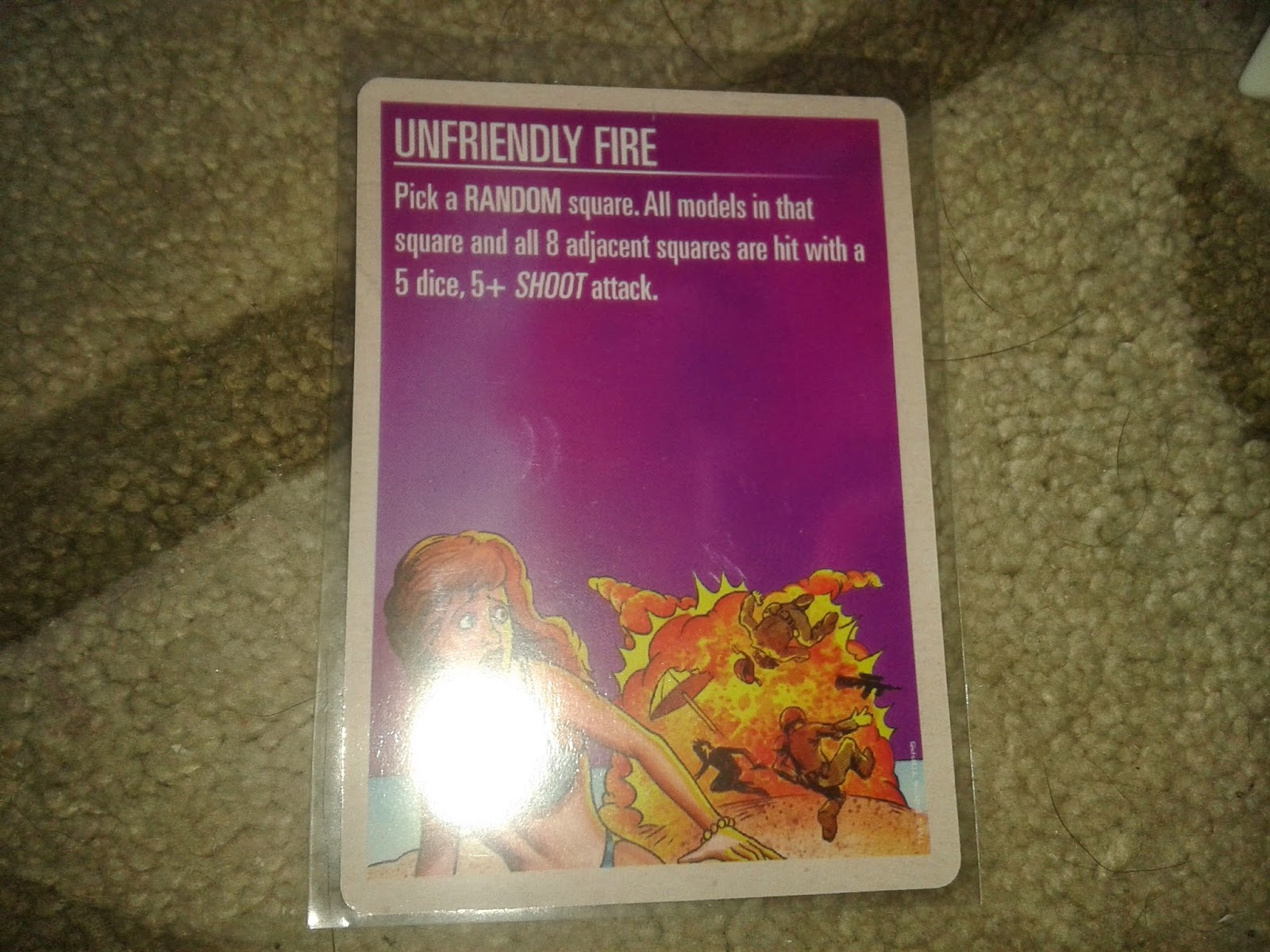 Then I drew this..... unfriendly fire..... The random roll put it right in the middle of the big fight in the corner... 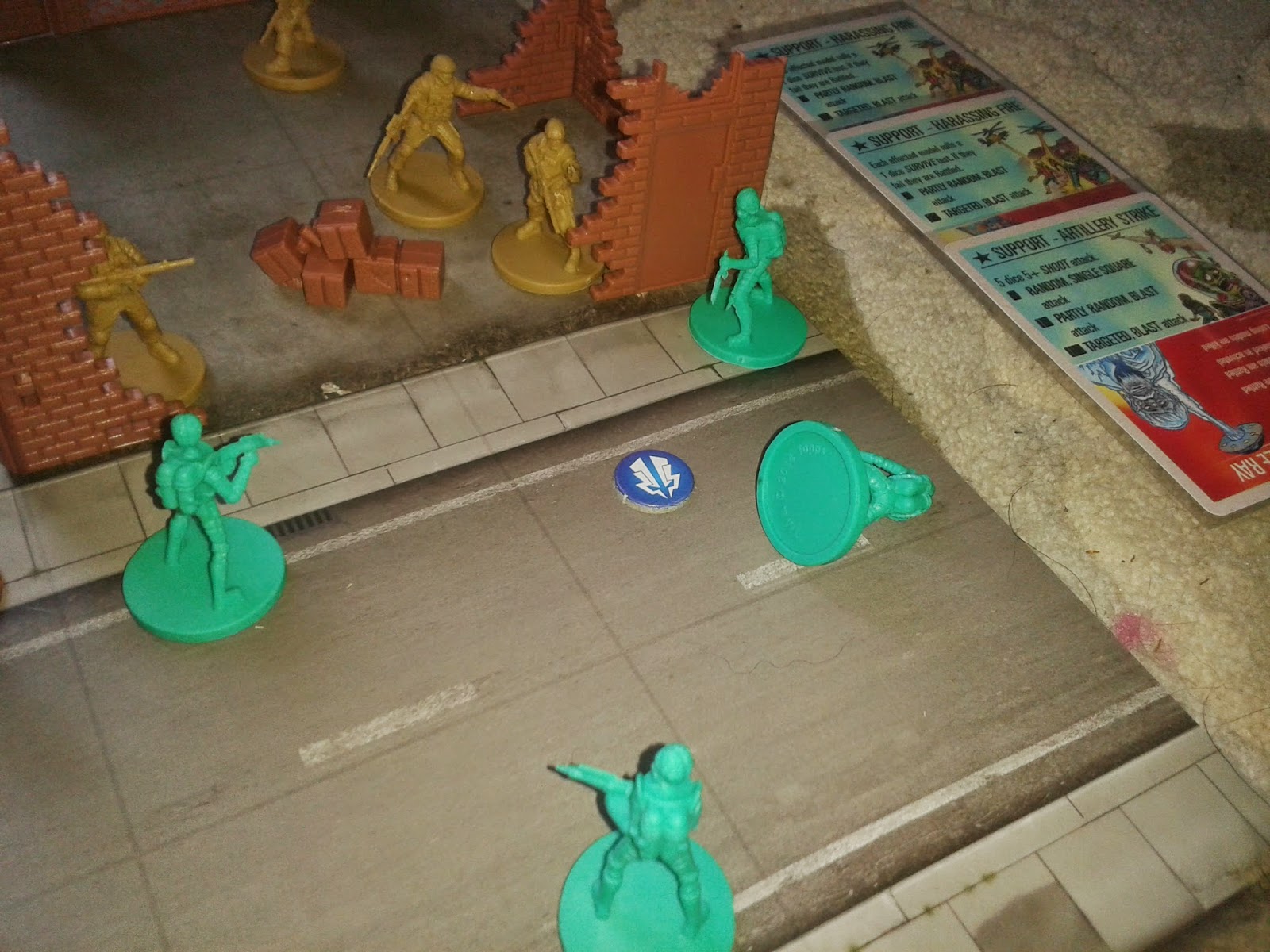 Damm it guys hold them Sergeant Olivia yelled, as she ducked out of cover and fired another burst at a Martian.... whats that noise?? a large whistling sound was getting louder and louder.... incoming arty she yelled ohhh shiiiii......... 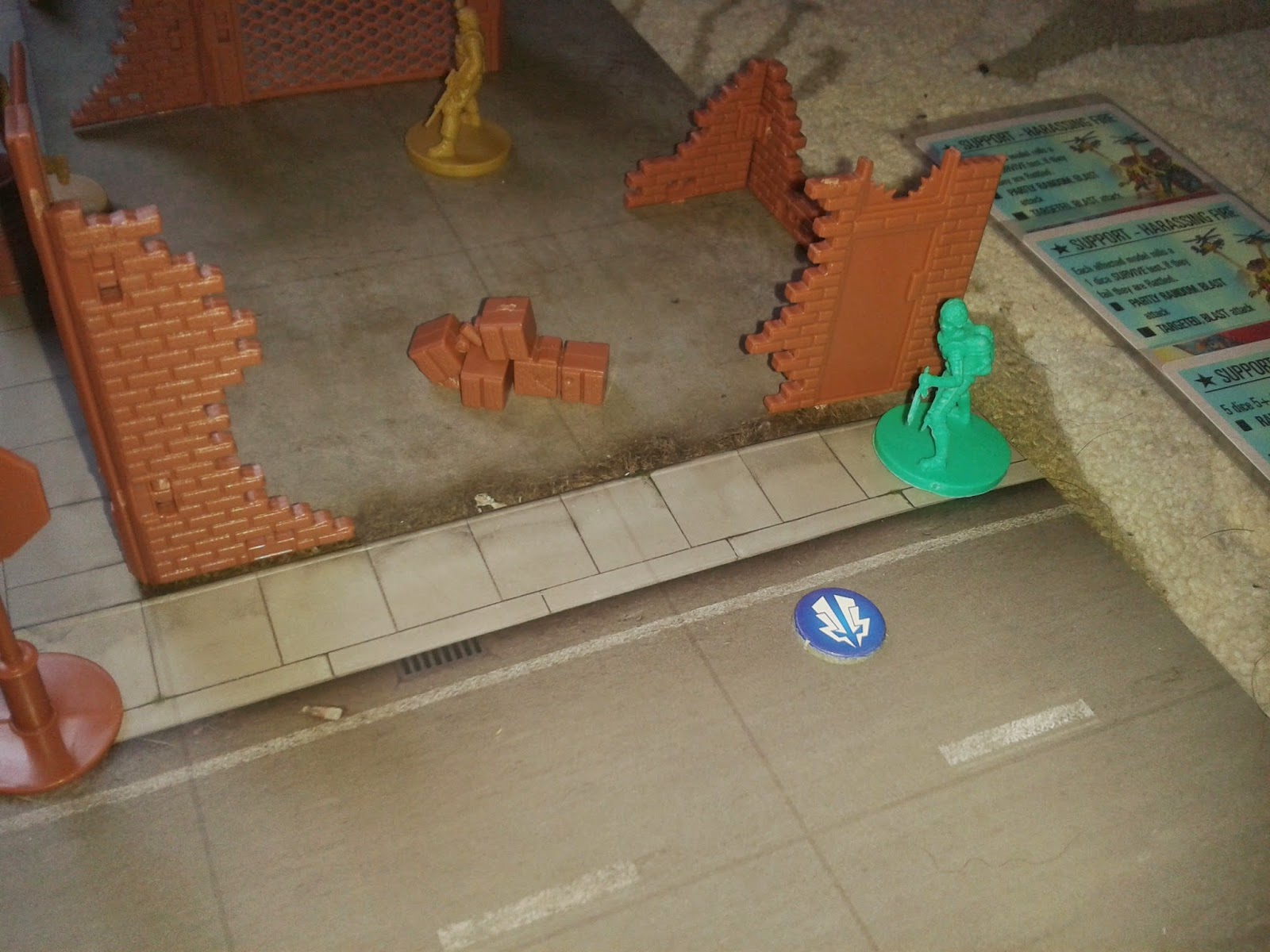 When the dust cleared there was not much left standing, both sides took heavy casualties.  I loved it so much fun and added to the story of the game. 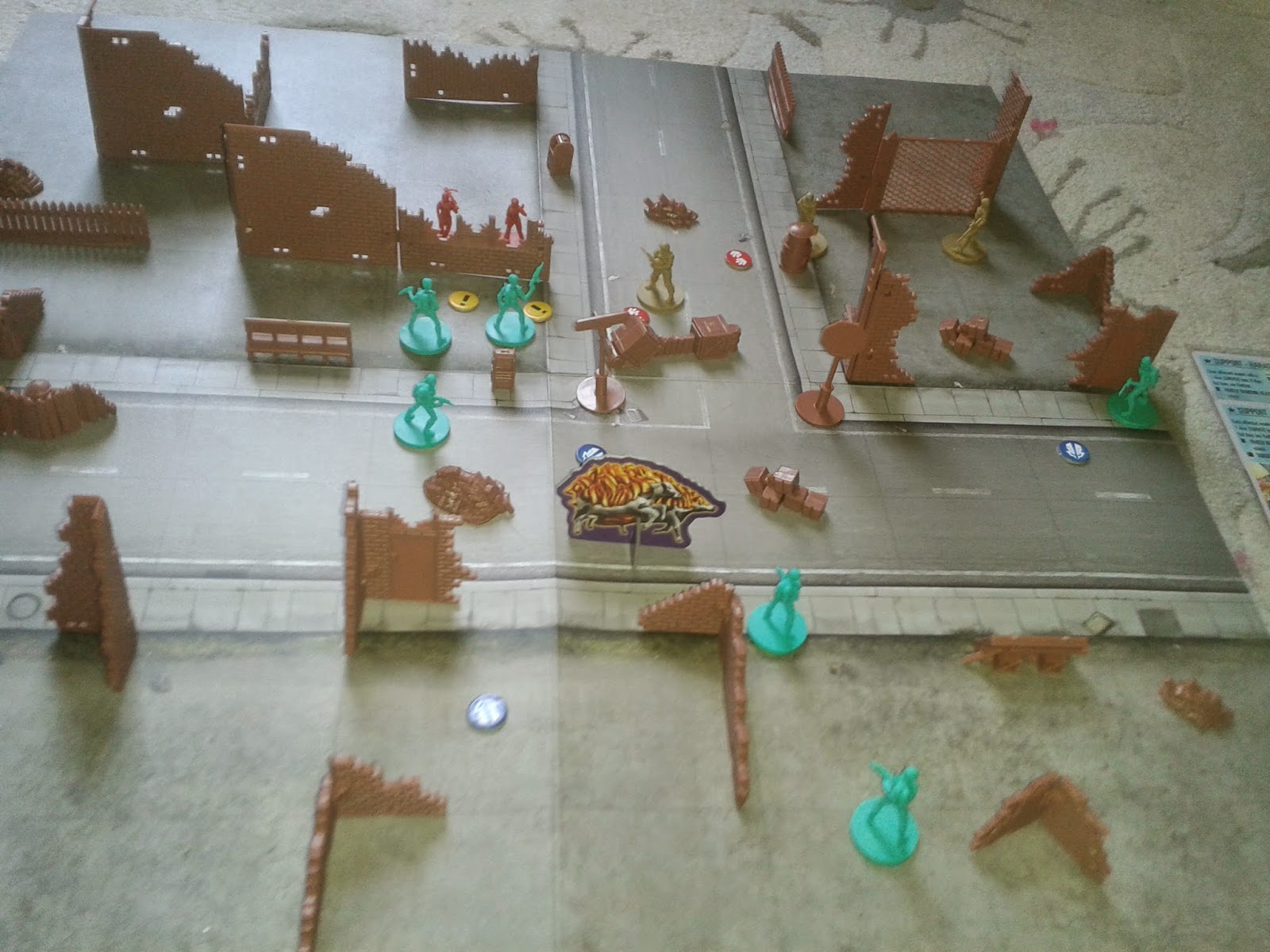 The numbers where getting closer, and the Martians where not close to a win, mind neither where the humans.  The cows went hurtling down the road 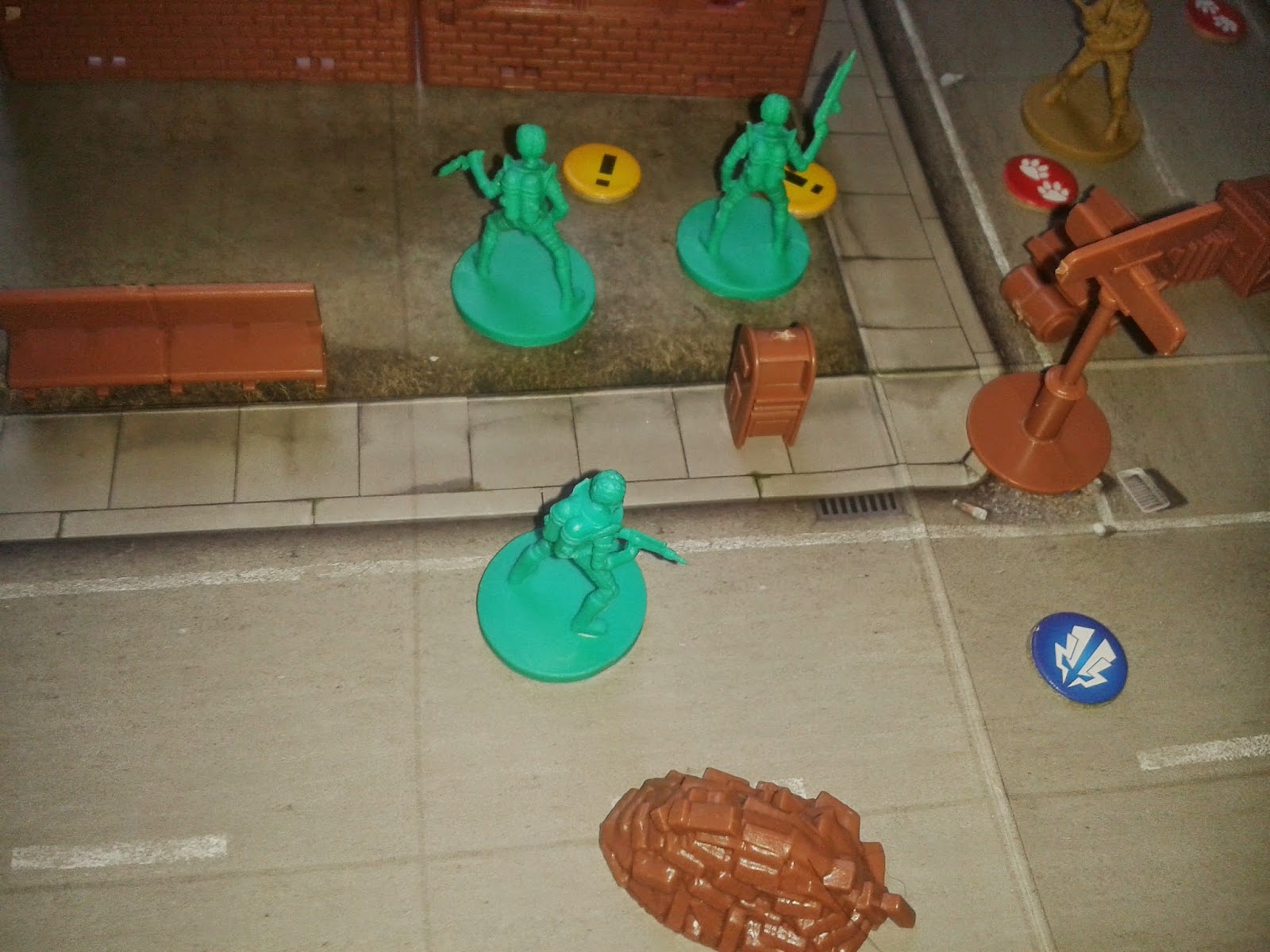 The Martiansprepare to swarm the humans and bring victory! 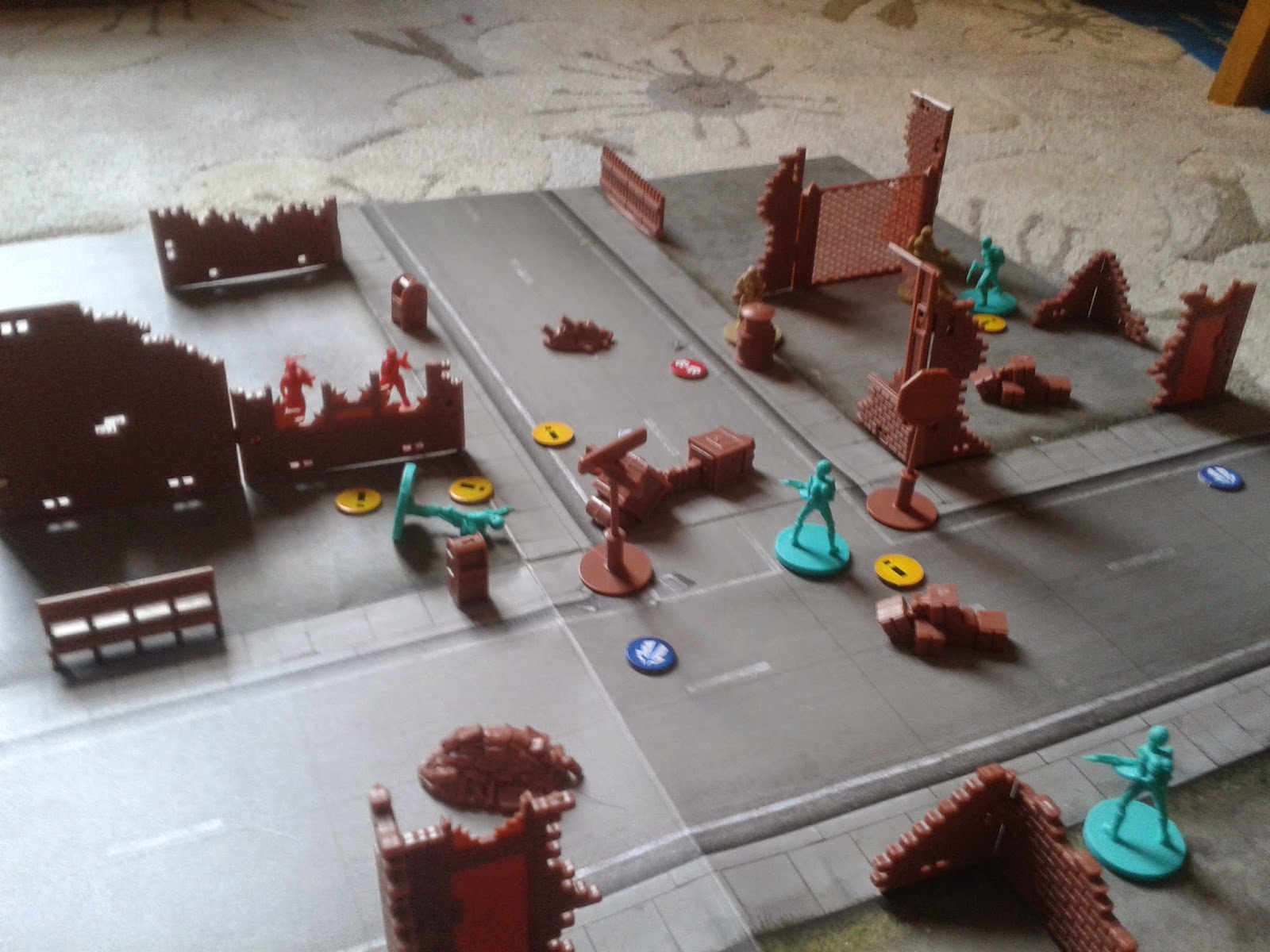 It did not work out though, the human heroes fire ripped into the Martians, but one of the troopers fell to the disintegration rifles. 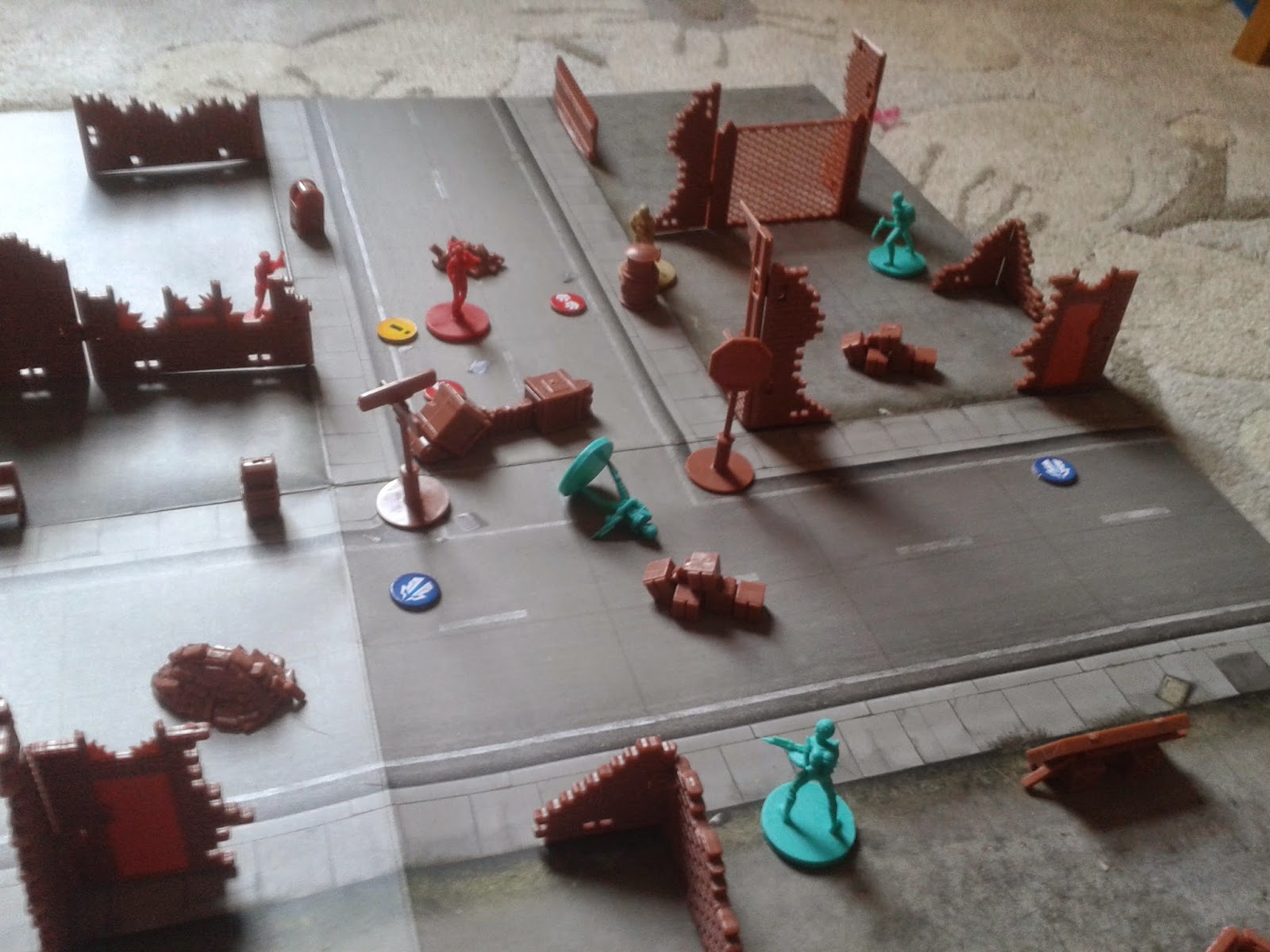 Outnumbered now the Martians had to really try to pull something out of the bag, Olivia decided to get aggressive and sent the Heroes out to hunt down the Martian troops, she was not playing for points, she was playing for the kill. 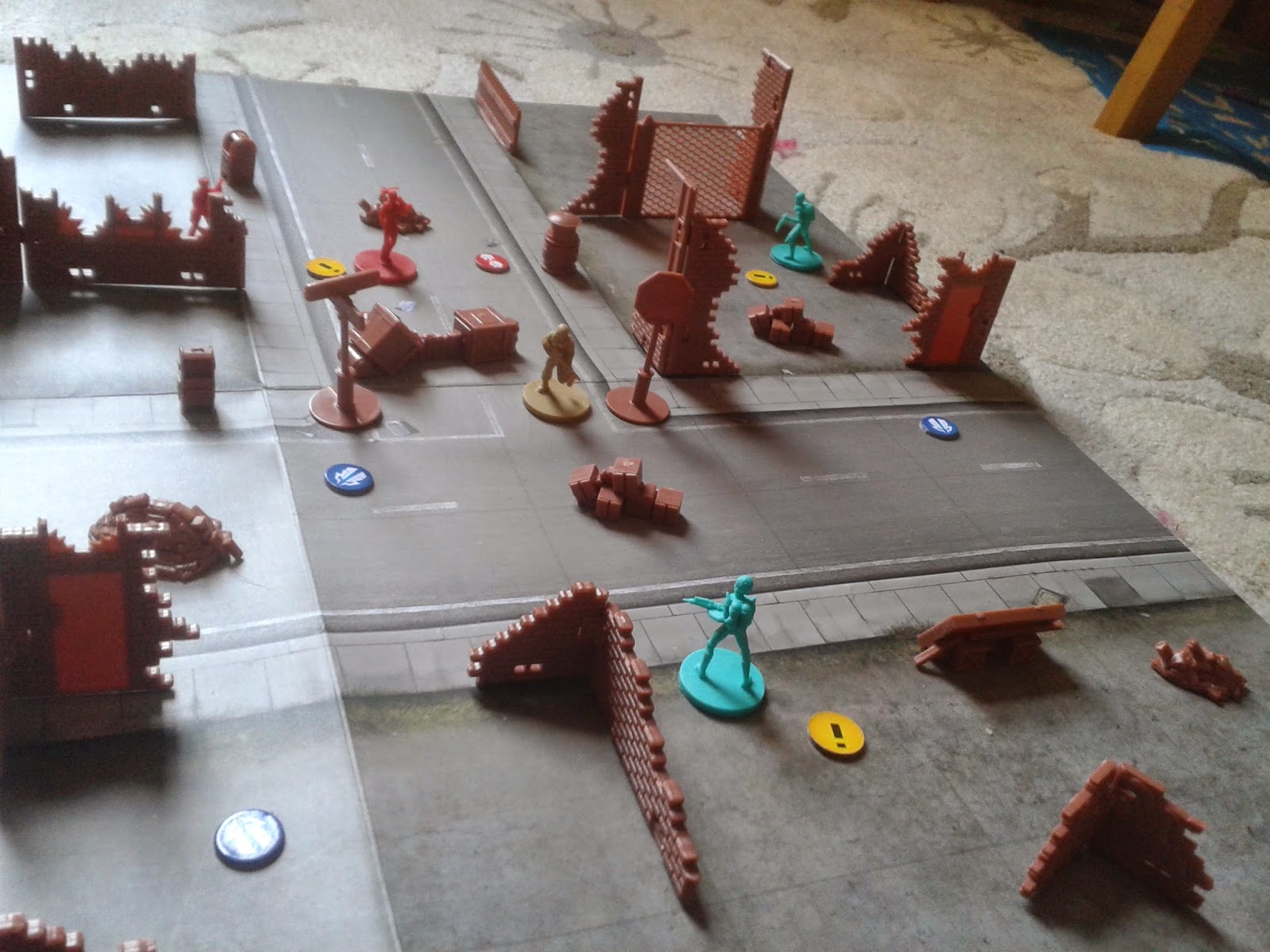 There was a glimmer of hope as a disintegration rifle dropped one of the human heroes, just one more for the win! 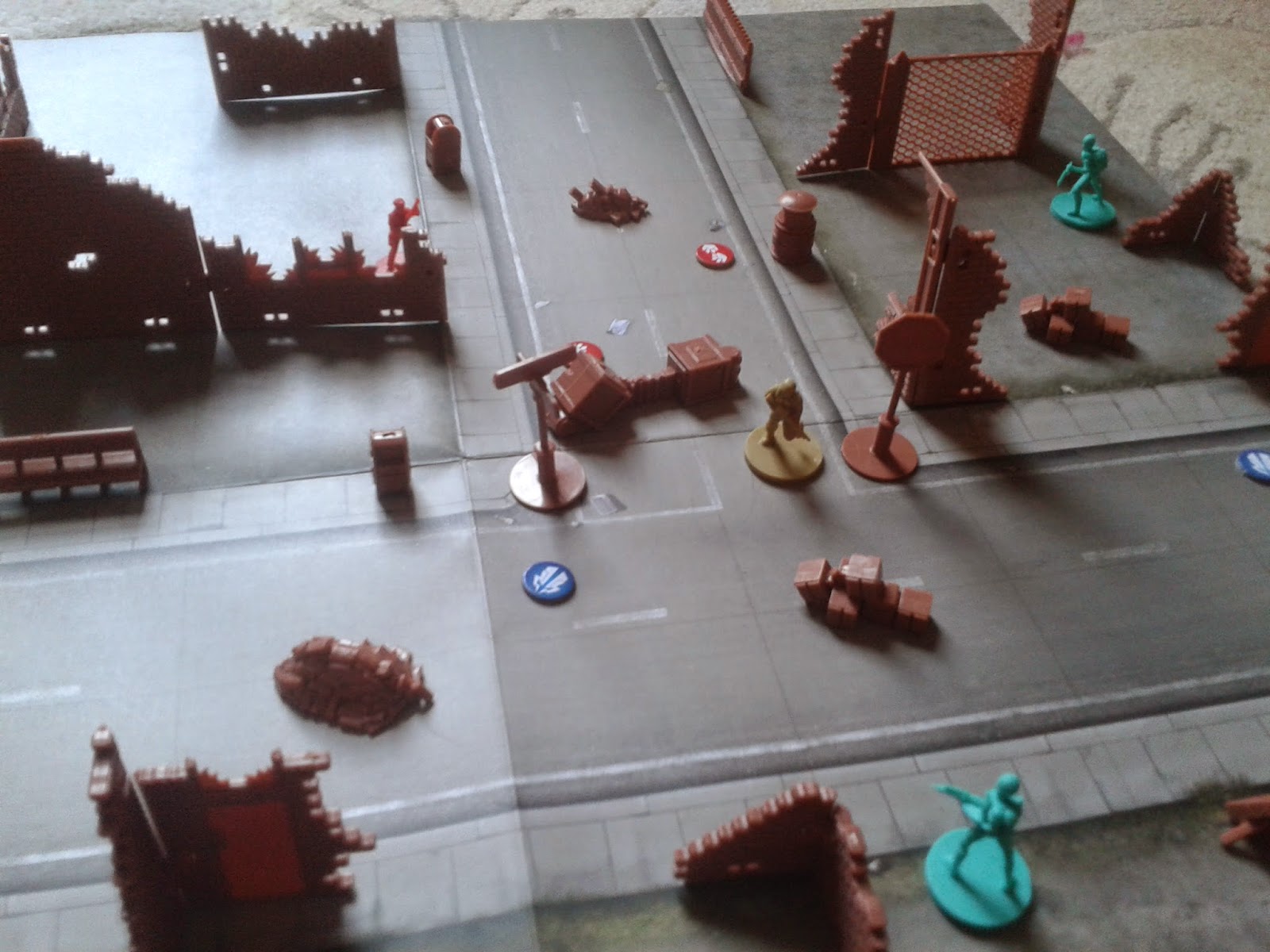 Olivia rallied her forces and pushed out to mop up the martians. 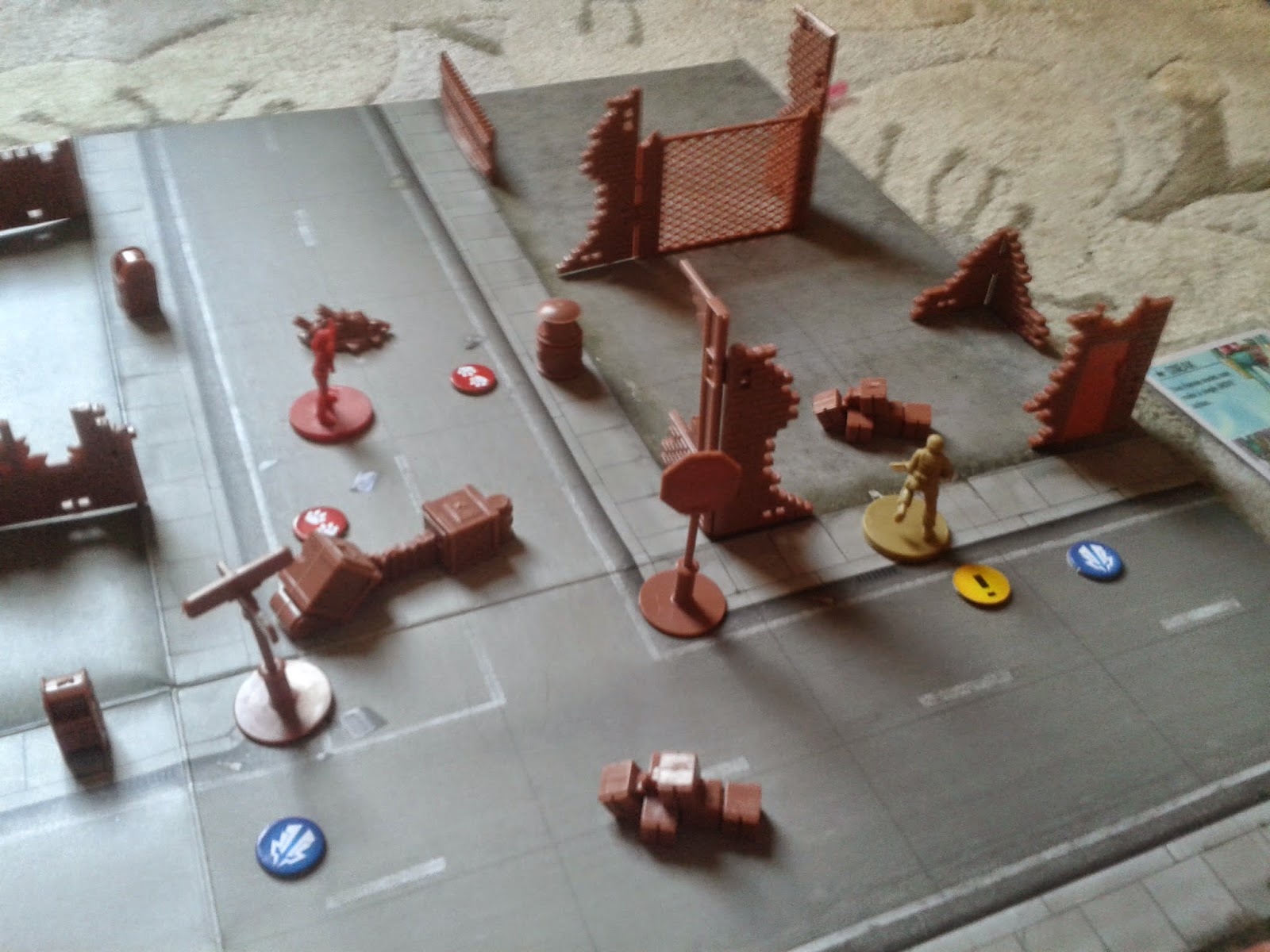 and the human forces where left in command of the field.  Only just though, one Hero and one trooper who should get a medal!

As she opened her eyes and looked around she heard loud voices and shouts, its all right sergeant a friendly voice said, we will patch you up in no time. Good she thought..... I want some revenge!  Did we save the civilians she asked? the Medic looked at her, some teen came in with a wounded cop, but we will have her up patched up, you just rest.  You did well soldier.

Martian warlord Martin slammed his fist down... we had them! we out numbered them, we should have destroyed them all! Next time I shall send a squad leader for the troops so this will not happen again!

Well, that was a great game, it swung back and forth, all game, Olivias choice to stand in cover and fire was a brave move, and paid off!  The random artillery strike changed the game, but I love the fact it happened, it adds so much to the story, and an element to remind you that this is not the only battle in the war against the Martians.

Again we played using all the stuff from only the box, so much variety and so much fun in this.

We cant wait to paly the next scenario.... so stay with us to see what happens when Sergeant Olivia and Warlord Martin meet again!
Labels: AAR Mantic Games Mars Attacks