Skip to main content
Labels
Posted by Unknown May 08, 2015

The Trager was a Cardassian Galor-class cruiser that was in service with the Cardassian military in the mid-24th century. Trager was under the command of Gul Macet.
In 2367, the Trager attacked the USS Enterprise-D in retaliation for the USS Phoenix's unauthorized attacks on Cardassian starships. The Trager proved no match for the Galaxy-class starship. 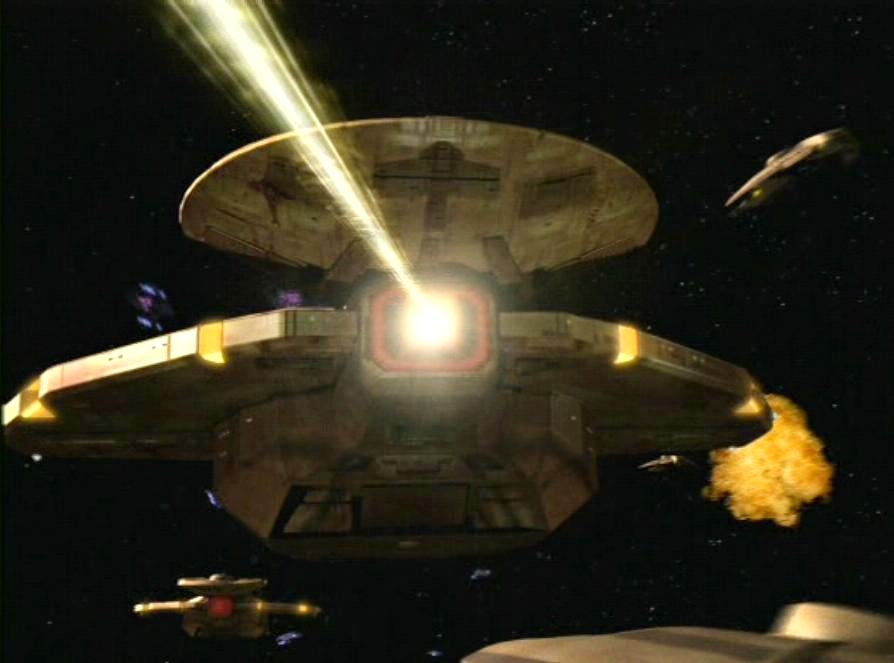 It also comes with a Borg assimilated ship cards as well, for the Borg having taken over the ship. 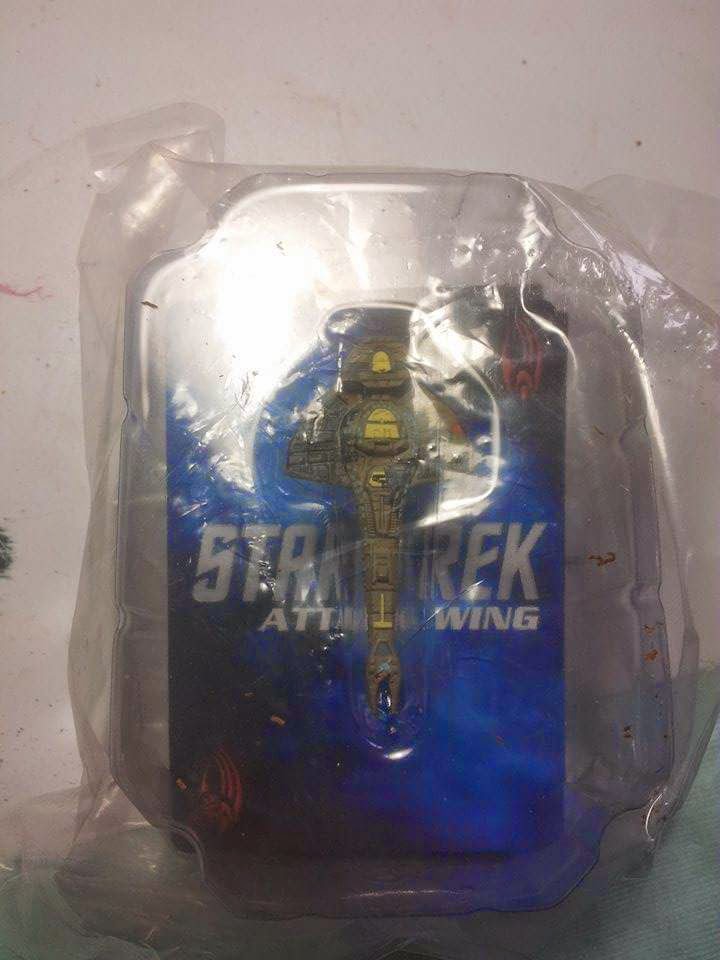 This is a pack that is a prize ship rather then retail, so it comes packed like this, it usually has less cards then a retail ship and does not include a mission, but it does come with some great stuff in it.
keep reading to find out!

First we have a load of card goodies with this one.... 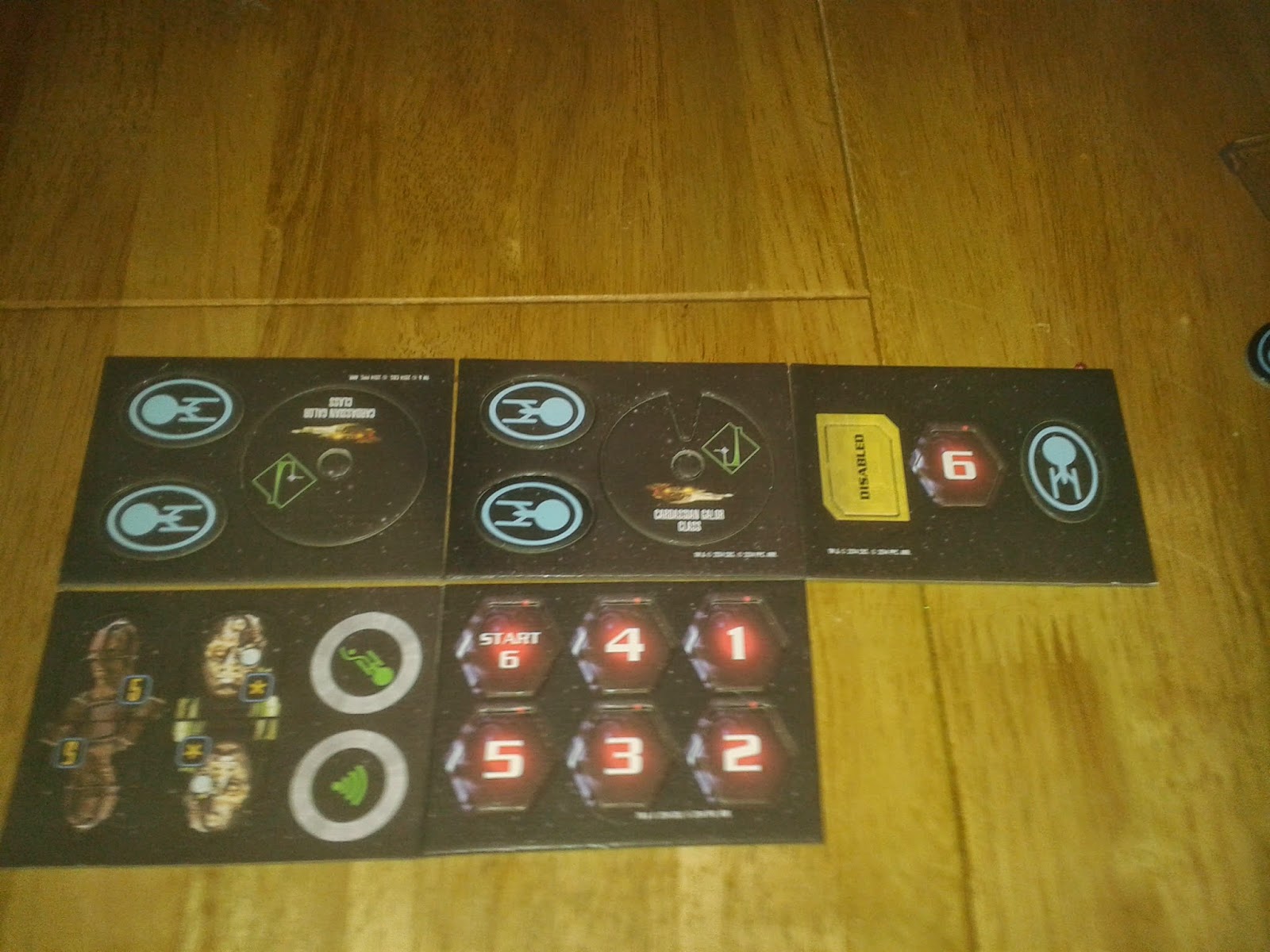 What are those new tokens? BORG!!! that's what. Borg captain drone tokens.  Your captain has a number of these on his card, he can use abilities that spend borg tokens, but each time he does his captain skill drops.  His skill is always the same as the amount of drone tokens he has left.  There are ways to replace them. 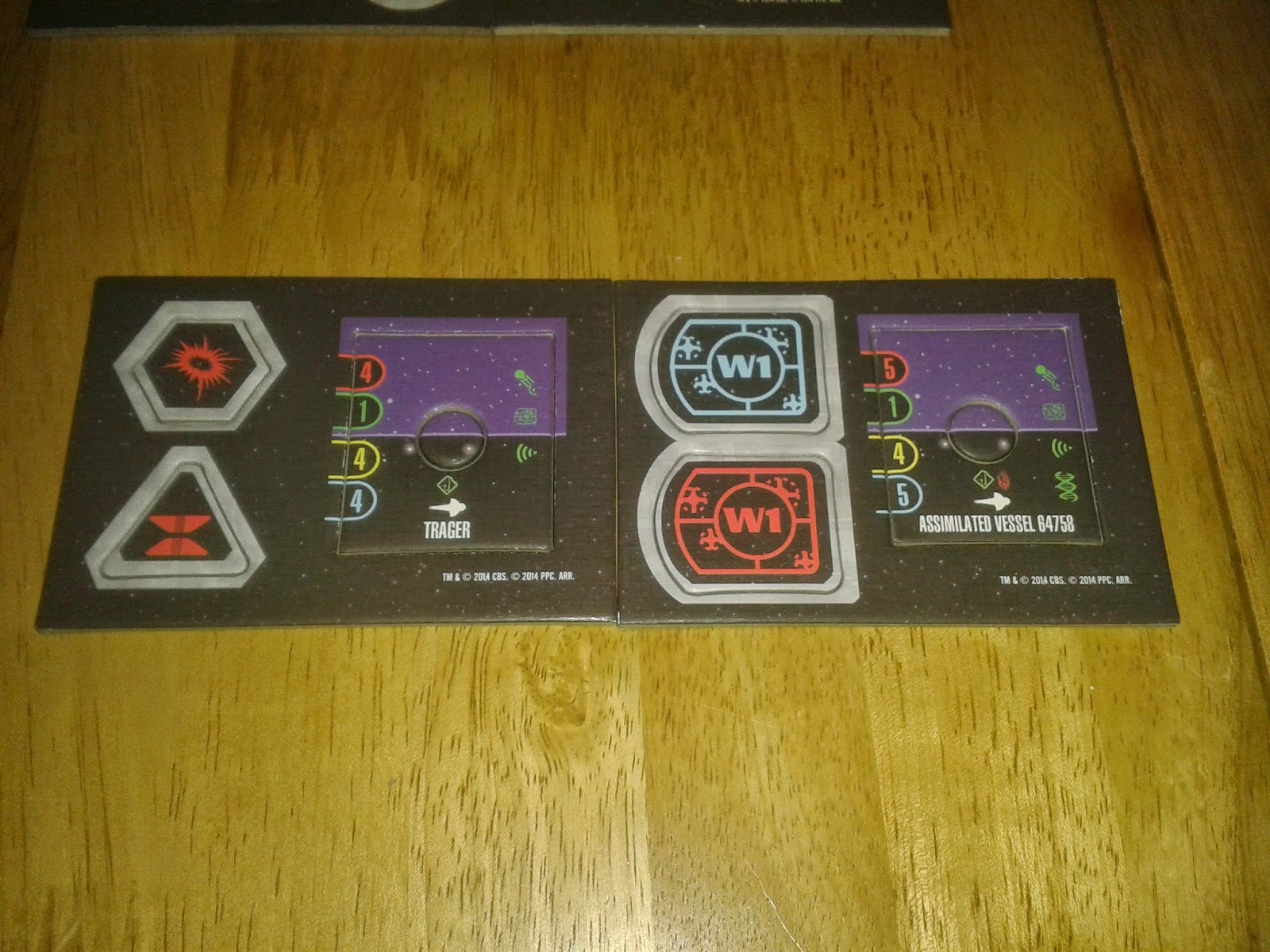 As you can se unlike other ships this comes with two bases, one which is Dominion pure and has the Trager and Galor class on it, and One that is Dominion Borg joint faction and has the name Assimilated vessel 64758, and a generic assimilated Galor. 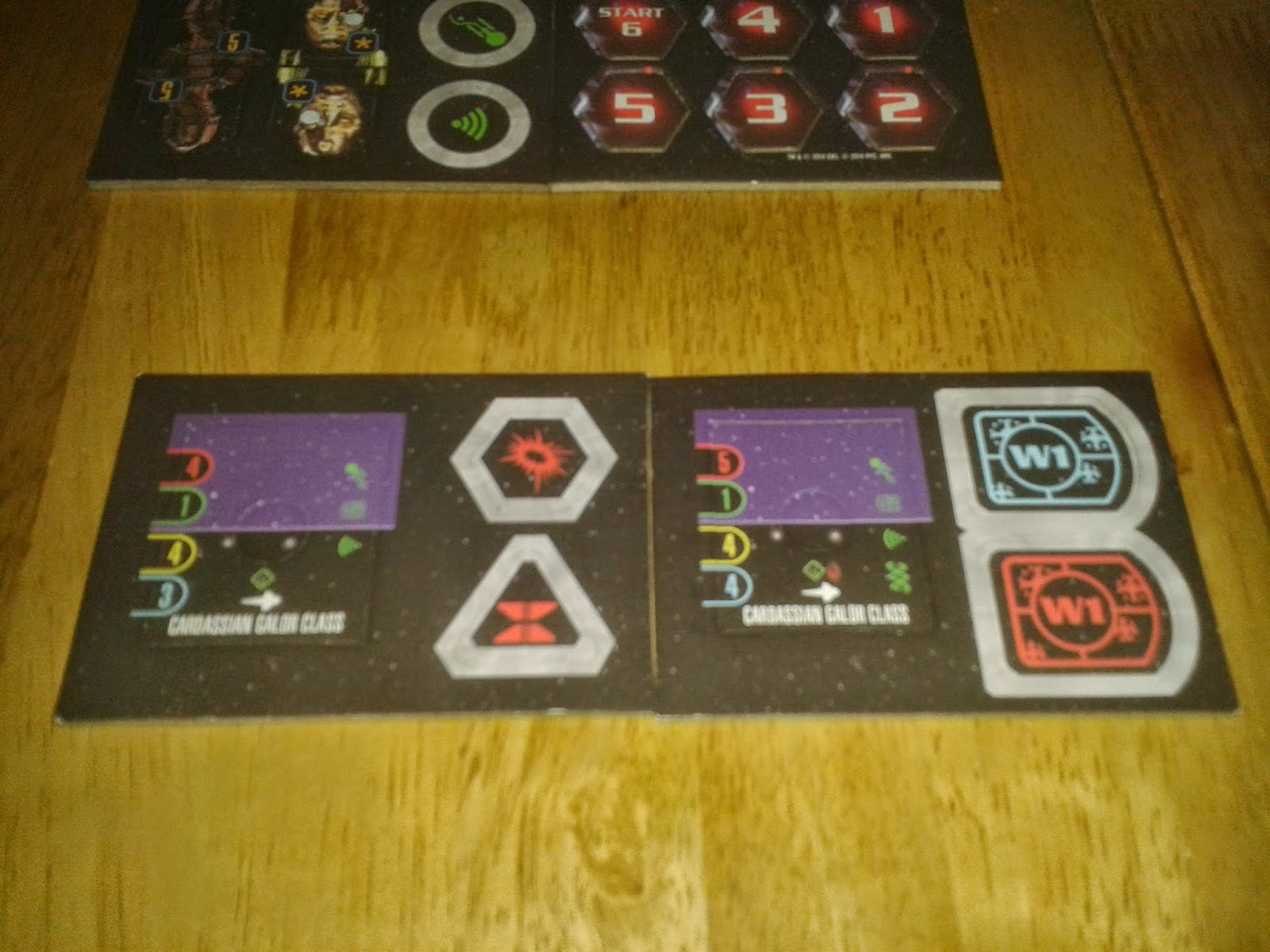 You do not get missions with a prize ship, but I am loving this one! 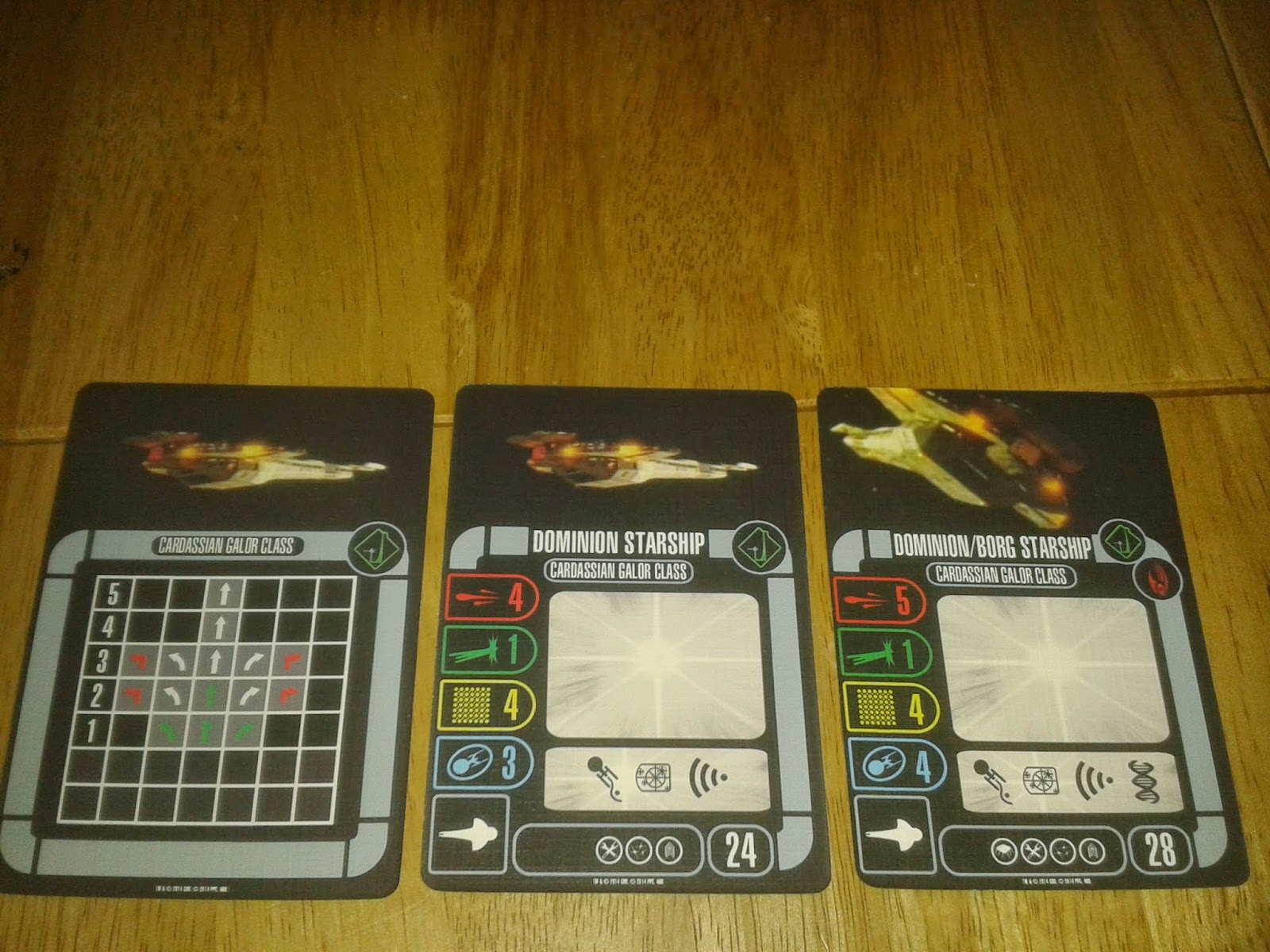 You get the standard movement card, which as you can see is the same as the regular Galor, she turns like a tank!.  A generic Dominion Galor card, which does have different upgrade slots to the Kraxon we looked at earlier.  Then we have a generic Dominon/Borg starship.  As you can see the Borg ship is more expensive, but more powerful with more shields and firepower, and the regenerate ability on its action bar. 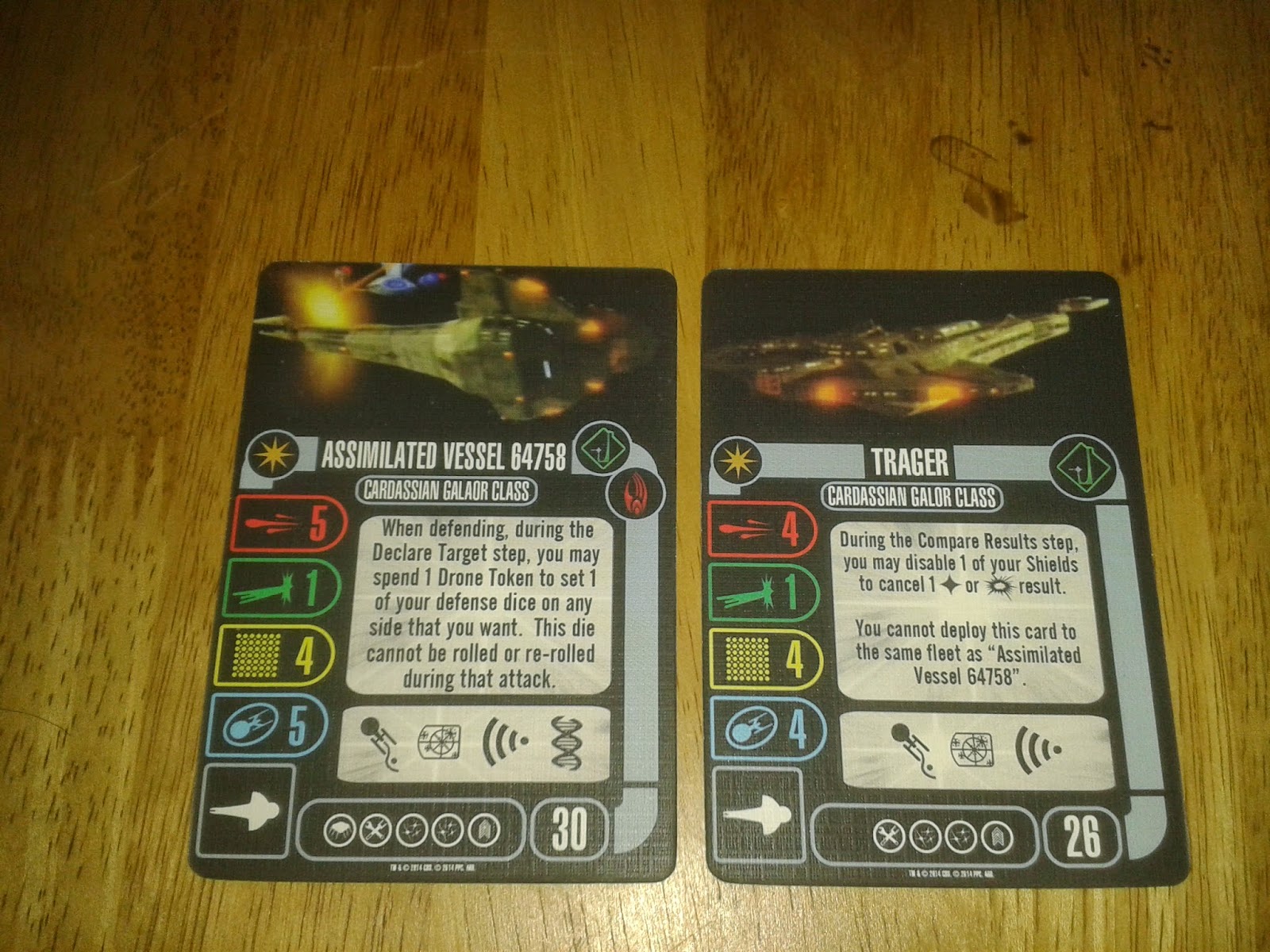 We get the named ships cards as well, 64758 is a beast of a ship, high shields, firepower and hull, lots of upgrades, a crew, tech, 2 weapons and a new one, a Borg upgrade.  It is also Dual faction so you can put Dominion and Borg upgrades on this ship together.  It has the same actions as the regular Dominion ship and the regenerate action as well.  Its special ability is you can spend a drone token seen earlier when you are defending to set one dice on an evade.  It is a passive ability so does not need an action.  The normal Dominion one is a solid ship as normal with different upgrade options to the Kraxon, and it also has a passive ability, you can disable a shield to cancel a hit or crit result, which is handy! 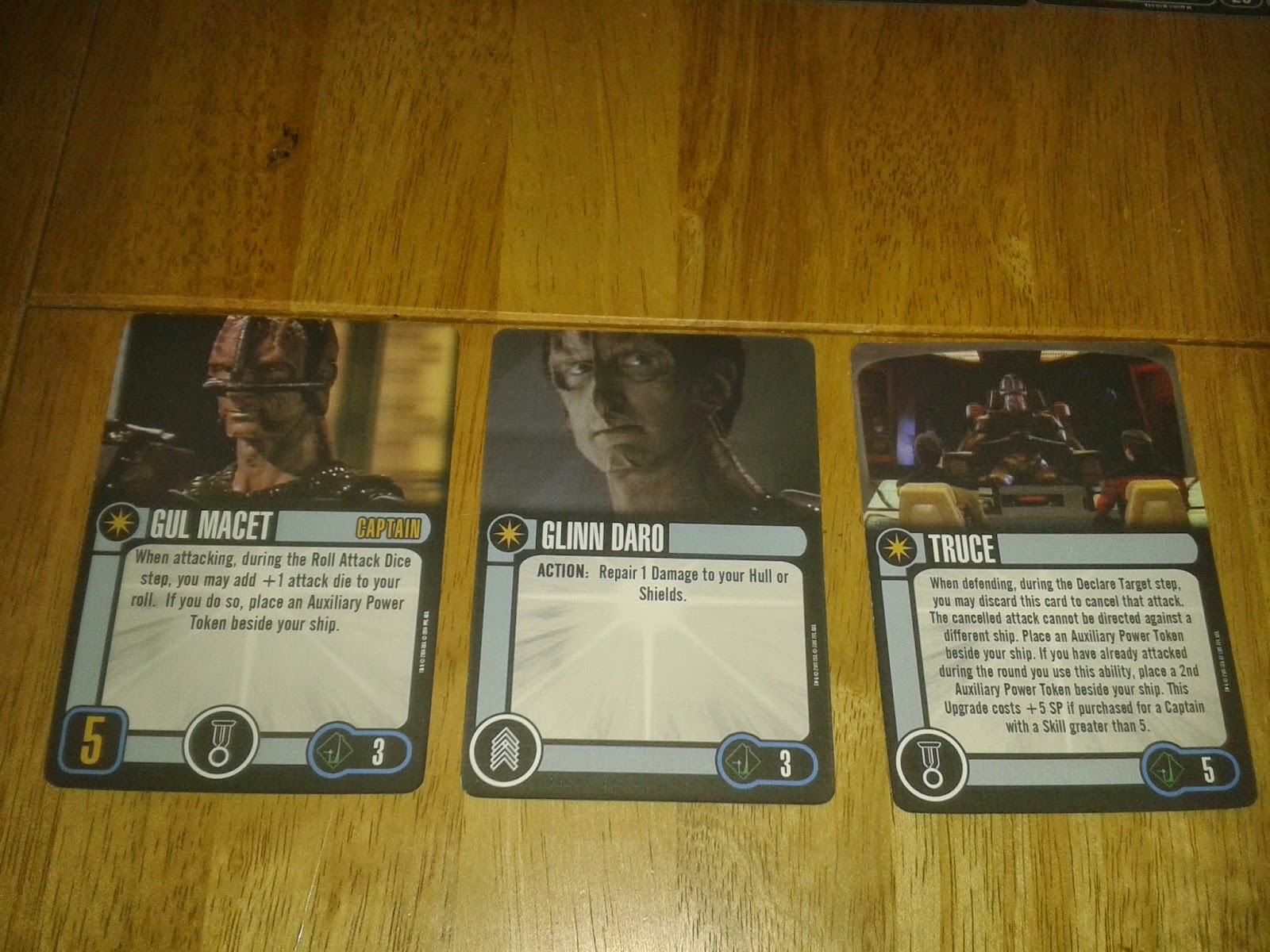 You get 3 Dominion cards, not a generic captain with this one though.  You get Gul Macer, a 3 point 5 skill captain with an elite talent.  He has a passive ability that when you attack you can add a dice for an auxiliary power token.  Glinn Daro comes in as crew for 3 points and an action he can repair a shield or hull point, very useful!  Finally we have a very powerful elite talent in Truce. You can discard it when defending to cancel that whole attack, and the enemy ship cannot target another.  It is very powerful when used at the right moment can allow you to hit a ship hard for no return fire.  It does cost more if your captain skill is higher then 5, so it works well with Gul Macet. 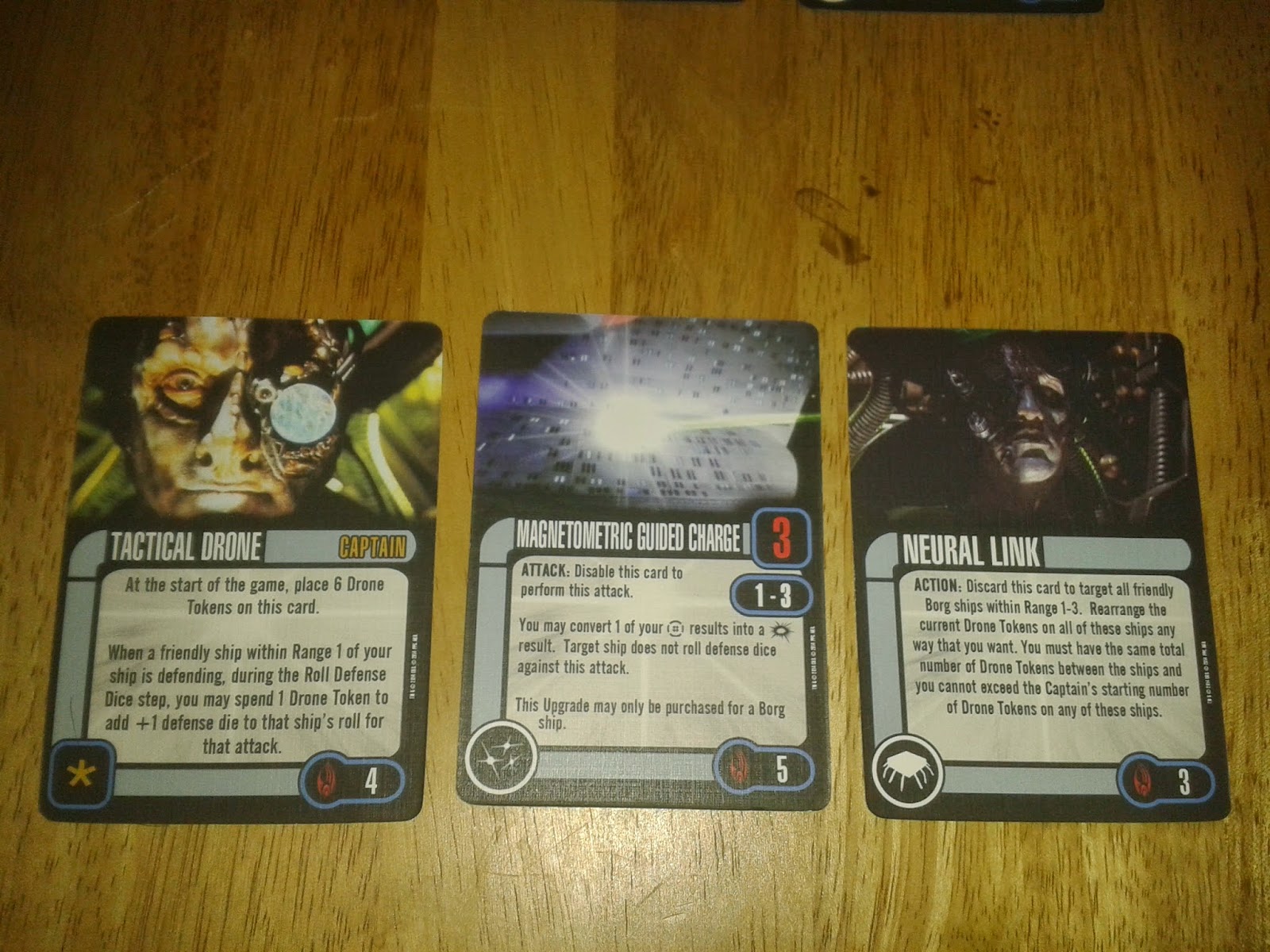 You get 3 Borg cards for this ship as well.  Tactical Drone captain.  he is 4 points at starts at captain skill 6 as he has 6 drone tokens on him.  His ability is if a friendly ship is at range 1 and attacked, you may spend a drone token to add one defence dice to the roll.  For weapons you get magnometric Guided charges, only a 3 attack, but the target does not roll defence dice, very useful against cloaked ships, and you can turn a battlestations into a critical hit.  You get a Borg slot with the Neural link card, for an action you can discard it to target all friendly Borg ships at range 1-3 and rearrange your captains drones tokens.  Its handy if you need to move some over and power up another captain. 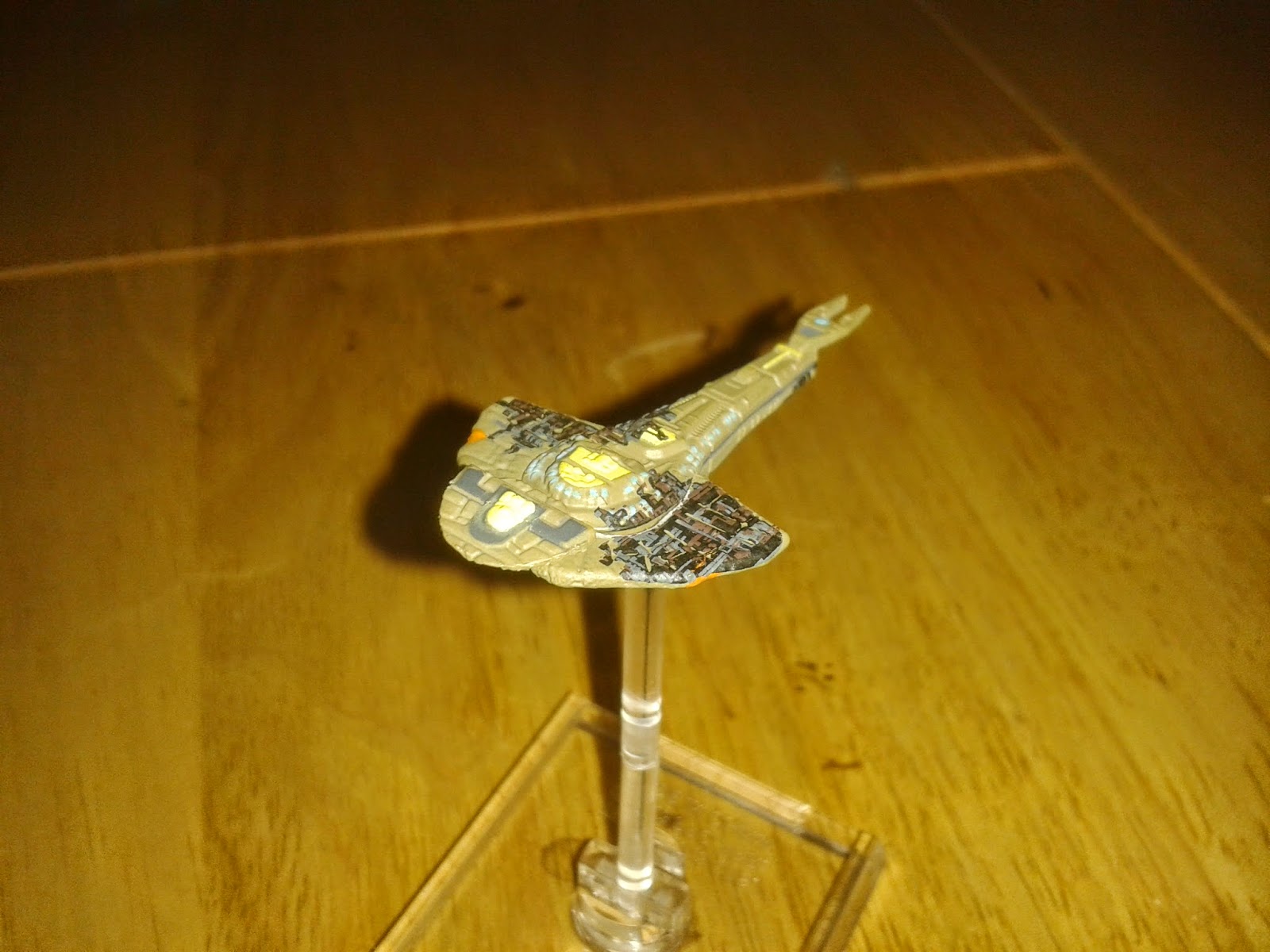 The ship is the same model as the Kraxon, but with a different paint job.  It has some black on it to look like assimilated parts, or battle damage. 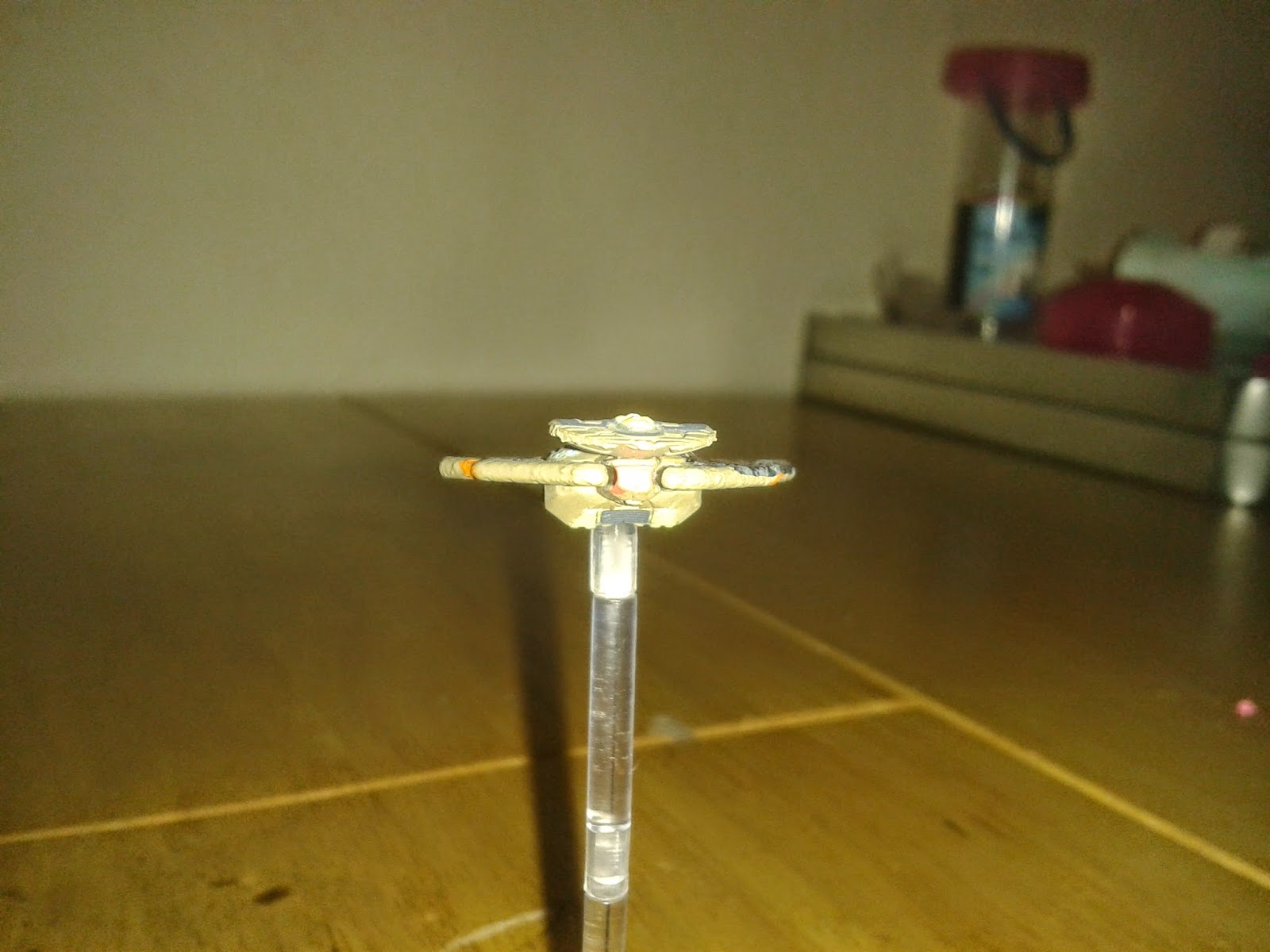 It is a really nice effect either way. 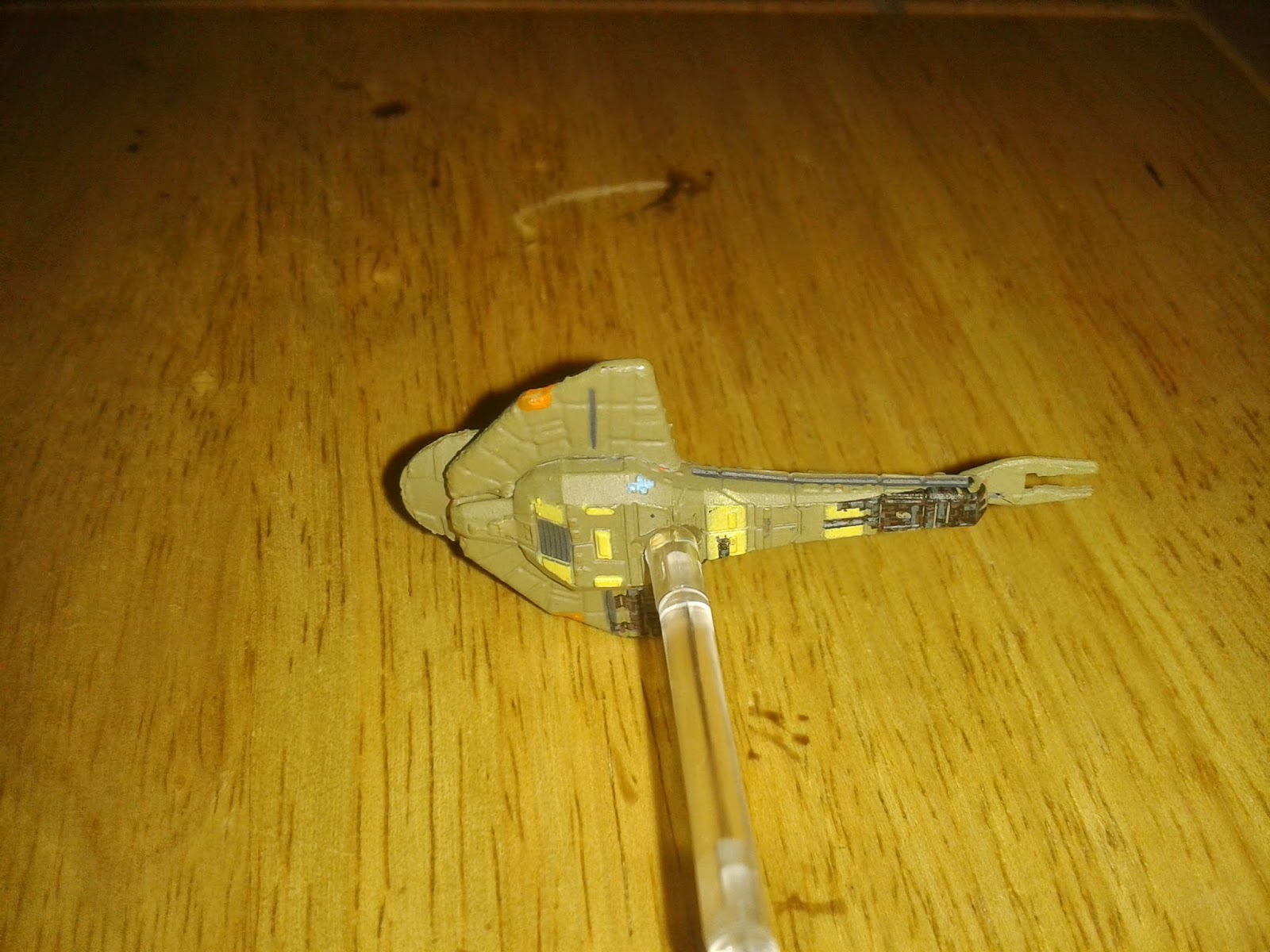 A nicely detailed ship with an interesting change in the paint.

This is a great fun ship, being dual faction it adds power to my Dominion fleet, and a start to a Borg one as well!