Today a look at a 15mm Tiger from Forged in Battle... its the right scale for flames of war and I mean its a Tiger.... who doesn't like a big cat??

The model is crisp, well cast and looks good.  Cast in a white resin, its a different type to the resin I'm used to working with for Flames of War.  It  feels nice and solid as is made in only a few parts, so assembly is simple and quick The Resin hull, a Metal turret and gun barrel and also the hull MG in metal. 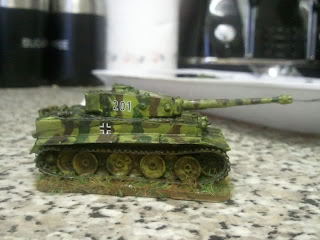 It was quick to assemble with no flash at all, which always helps, and I'm rather pleased with it. The only downside was the fiddlyness of the Hull MG it was a real pain. Also the moulded on base. It may be a problem for some gamers, it does not really worry me much to be honest, but I suppose you could take a dremel to it and bring it off, but that would of course increase your time in the model.
Do I prefer it to Battlefronts one? hard to say, the Battlefront model is lovely, and probably has the edge, but this is cheaper (not massively) and faster to put together. 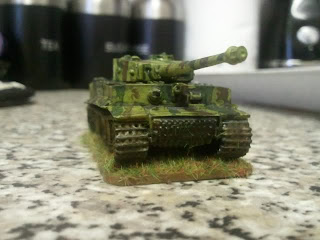