Skip to main content
Labels
Posted by Unknown May 15, 2018

Time for another visit to the shipyards to see what we can make of the Robinson.  ITs a captured Jem Hadar Attack Ship used by the Federation for covert missions in the Dominion War.
Using the normal rules of only cards that came in its pack, and costing no more than 50 points lets see what we can come up with 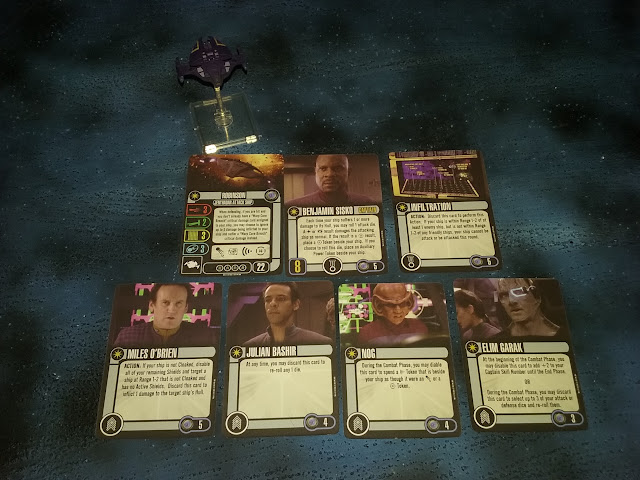 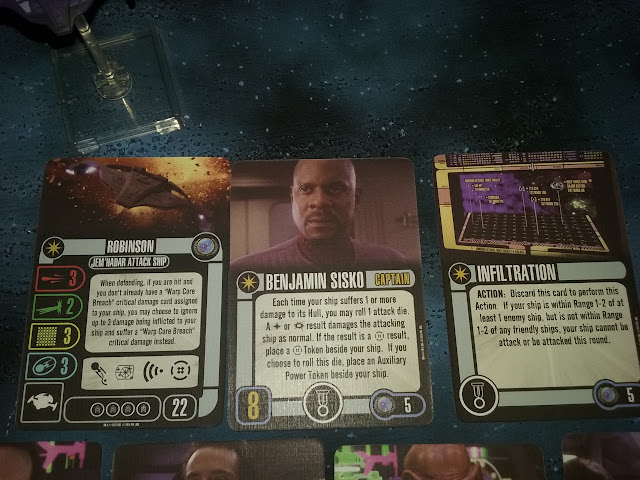 The named Robinson herself  is fairly nimble, but doesn't kick out too much in the way of firepower.  The named ability allows you to pull out Warp Core breach from the damage deck to avoid up to 3 damage, which is really useful as the ship only has 3 hull, so when you are sat on your last hull point and get hit hard you can use this to keep going at least for a bit longer.  For captain we have Benjamin Sisko.  With a captain skill of 8, he is no slouch and can hold his own.  His ability lets you roll a counter attack each time your hull takes damage.  When the hull is hit, you roll an attack dice, on a hit or a critical the attacker suffers the damage, if you roll a battle station you get to put it next to your ship.  If you do decide to use this ability to counterattack you must take an auxiliary power token.

His Elite Talent is Infiltrate, you can discard this to avoid being attacked this round, at the cost of an action and not being able to attack yourself.  This will allow you to set yourself up for a better shot in the next turn, or to just avoid being destroyed if things are going badly. 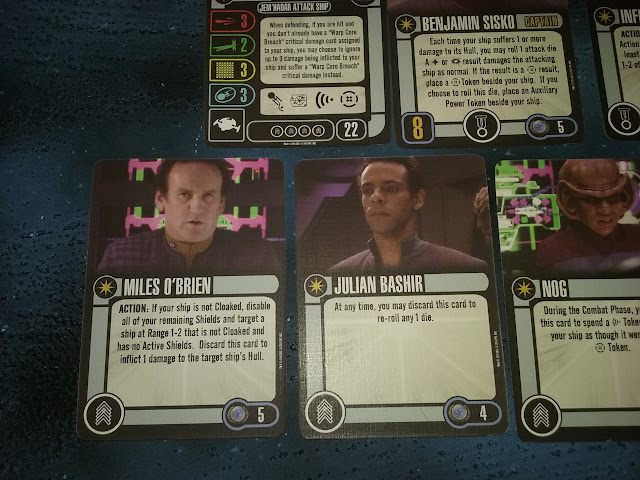 In the crew slots we have Miles O'Brien.  His ability is an action that if not cloaked and with no active shields (with 3 shields this can happen easily) you can discard this card to perform 1 damage to a target that is not cloaked and also has no active shields.  This is a great card when you need to be sure you get that damage through to destroy your target.  Julian Bashir lets you discard him at any time to re-roll any 1 die.... 4 points for that seems pretty steep at first glance.  Until that is you think about the ships ability of taking a warp core breach.  You have to roll each turn on the breach, so Julian is there as insurance to give you another chance if you fail the roll and explode. 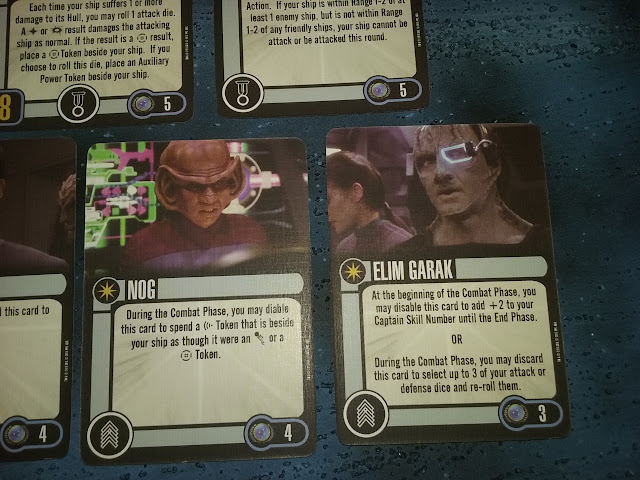 Nog takes the next crew slot.  He provides some versatility to the ship by allowing you to disable him to spend a scan token as if it was an evade or a battle stations.  Very useful on attack and defence,

Lastly we have Elim Garak.  He has a couple of options, you can disable him to add 2 to your captain skill at the start of the combat phase.  This lets you bump your skill to 10, in mot cases allowing you to shoot first.  The other option you have with Garak is you can discard him to select up to 3 of your attack or defence dice and re-roll them so he gives you plenty of options to work with for more attack, faster attack, or defence.

The Robinson doesn't have the punch to be a ship of the line.  Running this straight at your enemy line will usually not end well.  Use It to flank, manoeuvre and prepare your shots as the ship is very nimble with an excellent selection of manoeuvres you can use. strike and move, use the ships ability if you need to stay alive, or Garak to boost Sisko to skill 10 and it will provide a surprise forcing your enemy to either ignore it which will let you run riot, or to concentrate on it which lets your other ships do more.