Skip to main content
Labels
Posted by Unknown May 17, 2018

Todays ship yard comes from the hangers of DS9, after Ben Sisko has finished tinkering with the antique designs of a Bajoran Lightship Solar Sailor.  As always no more than 50 points, and only using the cards that come in the pack. She's not fast, she has no shields, and only a 1 strength weapon.  She is nimble though, and very cheap. but can anything fun or useful be done with her?  Lets see....... 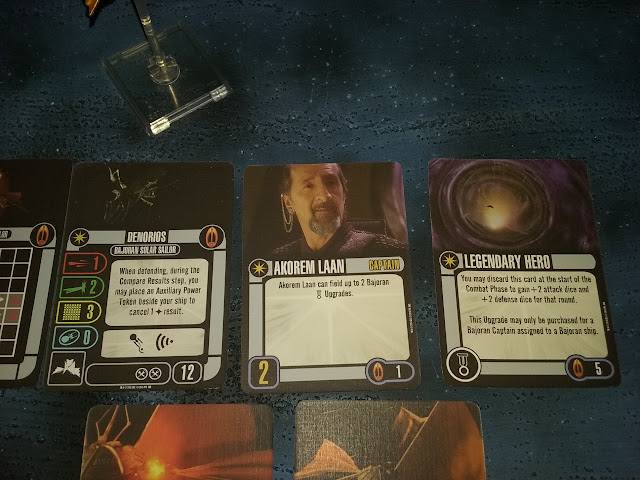 We start with the named ship Denorios.  she's only 12 points, and can take an auxiliary power to cancel a hit in combat.  With a dial with plenty of green moves this makes it a bit more survivable. With only evade and scan available as actions an evade and her ability means an enemy has to get more then 2 hits at least to have potential to put damage on you.  Akorem Laan has the captains seat on the ship (not the roomiest of ships).  He is skill 2, and 1 cost, and he is allowed to take up to 2 elite talents.

I only took one though, Legendary Hero.  This can be discarded to add up to 2 attack dice and 2 defence dice for the combat phase, so if you have made it into range one you are punching out a 4 attack, considering the ship is made of wood, that's not bad! 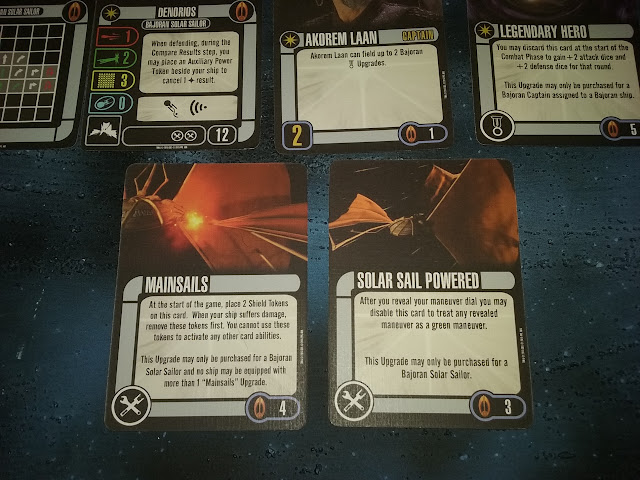 For tech we have Mainsails, which add 2 shields to your ship.  A much needed boost in survivability to keep you sailing around longer.  The other tech is Solar Sail Powered, which can be disabled to make any manoeuvre count as a green one, so you can do a green come about for example.  Very Handy.

This is not a ship for the main line of battle, barely one for the flanks as she doesn't have much speed, but used right can put out a bit of damage, at lest once anyway with the legendary hero build, but then its so frail I would ignore it whilst going after more dangerous prey, so it can then chip away at you, presuming it can keep up of course.

She is definitely a great fun ship for the scenario that comes with her, but she wont stand up to any war ships, even a Romulan Science vessel can give this thing a beating (eventually and it will be like a slap fight)