Skip to main content
Labels
Posted by Unknown May 08, 2018

Todays article isn't going to be too in depth, Arkham Horror is an older game, and my copy is "Well Loved" shall we say, and hard used, but that goes to show the sheer depth of the game, and massive replay value just from its core set alone.  Instead of the normal unboxing and mechanics, its going to be a quicker overview of the game, just to give you an idea, and if its something you like... go give it a try, its a classic and easily available.  Its a great game for solo fans of the mythos, or up to 8 players to enjoy.


I recall that the people went about with pale and worried faces, and whispered warnings and prophecies which no one dared consciously repeat or acknowledge to himself that he had heard. A sense of monstrous guilt was upon the land, and out of the abysses between the stars swept chill currents that made men shiver in dark and lonely places.
–H.P. Lovecraft, Nyarlathotep 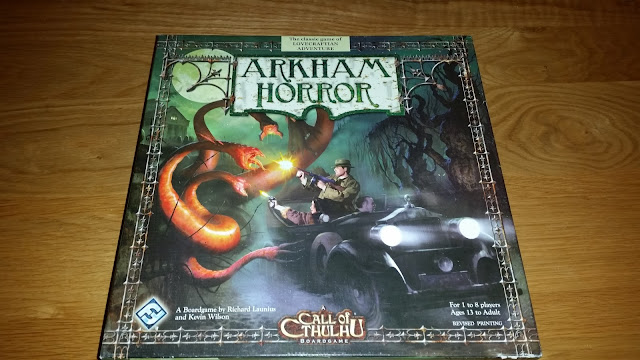 It is the roaring 20s, and while there’s electricity in the air, unnatural storms are brewing as well. Strange things are happening in the small Massachusetts town of Arkham: people have gone missing, sightings of indescribable creatures grow more and more frequent, the very air thickens with a sense of foreboding that roils like an acrid mist through the streets. The Ancient Ones are stirring…

Designed for one to eight players, Arkham Horror is a cooperative adventure game of survival, horror, and investigation. A terrible creature from beyond time and space—an Ancient One—is awakening, roused by dimensional gates that open across the city. Players take on the role of investigators, each with a unique backstory, abilities, and equipment. Joining forces, the investigators must secure the city, encountering its haunted and mysterious locations before the Ancient One awakens. If the Ancient One awakens and defeats the players in the final battle, all of Arkham is doomed. 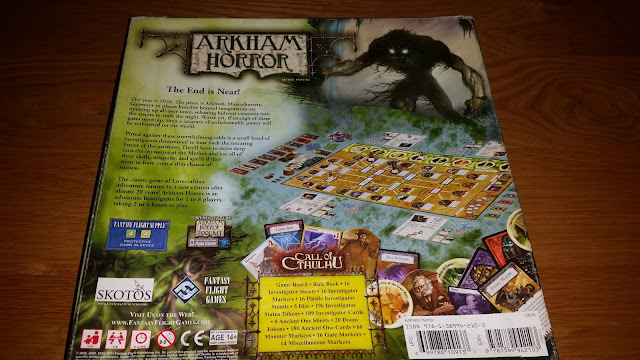 what's in this huge and battered box? lets take a peek...... 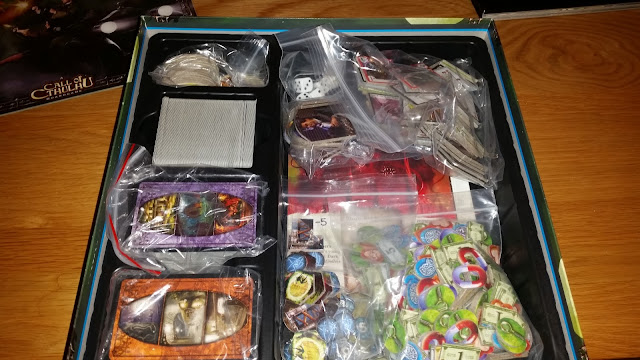 Well its FFG, and an Arkham game so there are a whole ton of cards and tokens for all sorts of things! 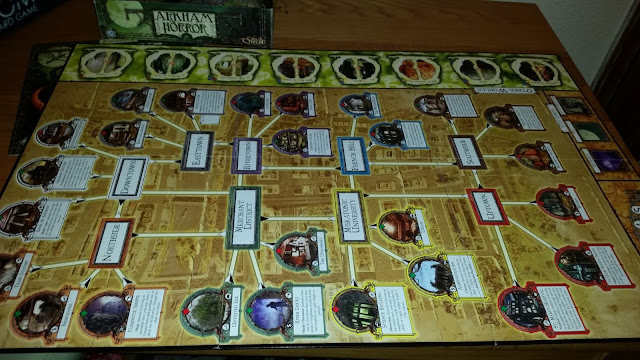 And a giant board that shows the city, with locations you can visit that have effects, and colours that denote where monsters may spawn, and where they may move!, yes monsters will move around in this game.


The City of Horrors

In order to win the game, players work together to keep the Ancient One at bay by closing gates that allow travel between Arkham and the perilous Other Worlds. Investigators move around the city gathering the weapons, spells, clues, and other items they need not only to close gates and defeat the Ancient One, but also to survive Arkham's monster-infested streets. The more gates remain open, the more monsters come through them to swarm the city and the stronger the Ancient One grows. If enough dark powers gather in Arkham, the Ancient One’s long slumber will come to a sudden and frightening end.
In this city filled with dangers, investigators might not make it through a single night on their own. But together, these unlikely heroes may stand in the very presence of an Ancient One and live to tell tales about their fearless actions in the face of unspeakable horrors. Arkham Horror features a unique way for players to customize their investigators. Each investigator has three pairs of two skills which can be adjusted throughout the game. At the start of every turn players have the opportunity to adjust their skills so that they have the right abilities for their circumstances. However, when you change one skill, the skill paired with it is affected. If you prefer to have extra speed for a turn, don’t expect to sneak by any enemies during your encounters. Maintaining a flexible balance is key.
There is no shortage of the macabre in Arkham. Investigators are pitted against the followers of the Ancient Ones, be they human or otherwise. Their enemies will not only challenge them physically, but mentally as well. Every investigator has a sanity threshold as well as a stamina threshold, representing the punishment their minds and bodies can take, respectively.
Investigators need to arm themselves with whatever weapons they can find, ranging from guns to spells to enchanted relics. These items can be found throughout Arkham, in shops, chance meetings, and even in alternate dimensions!


Gates to Other Worlds As the Ancient One stirs, gates spawn all over Arkham, spilling monsters out into the streets. When enough of these gates open, the Ancient One will be able to overrun Arkham and the investigators will have no hope of saving the town. In order to put an end to the encroaching darkness, investigators will have to close the multiplying portals that link our world to the beyond.
To close these gates the investigators must gather clues, investigate alternate dimensions, and then return to Arkham to close the gates. If they gather enough clues, they permanently seal the location so no more gates can be spawned. Enough of these seals ensures that the Ancient One remains dormant and Arkham is saved… for the time being.

If the investigators are unable to close all the gates, monsters swarm the streets and the Ancient One grows stronger. If enough dark power gathers in Arkham, the Ancient One’s long slumber come to a frightening end.
As havoc ensues in Arkham, the Ancient One gathers more power. With each catastrophic event, the investigators come one step closer to encountering a being so terrible and indescribable that they will be fortunate if its very presence does not completely destroy them.
Ancient Ones serve as the main antagonists for each game of Arkham Horror, and each one changes gameplay drastically. Not only does each Ancient One have its own unique and destructive power, but their followers gain additional abilities as well. Can you defeat these cosmic evils and forestall the doom that waits for Arkham?

When you pick your investigators, it states what items and special tokens they start with but at least half of this text will be "2 random Unique Items" or "2 random Spells" which you draw from the appropriate decks, or it could be similar with other items.

The 16 characters that come with the base set offer huge variety in playing styles, and story, again adding to the large replay value you will get from this game.

The Elder God you are battling against can  be one of 8 different malevolent evils, with each of these evils have different effects on the monsters throughout the game, and on the state of the game itself, and even on the final all or nothing fight against the Elder God itself, presuming you survive that long.

The game runs its engine on "Mythos Cards" that are drawn at the end of every turn. These cards will move some of the monsters, will open new gates to other worlds in random locations, and will even have text that could reduce your skills or make you lose items.  there are a huge amount of these, so replay value is high.

Yes the game could seem random at times, and yes things are resolved with the roll of a dice looking for "successes", but t me that's part of the charm and the fun of it.  Its a brutally hard game at times, but it has always left me wanting to come back for more.

If you want to join the dark world of Arkham,  head on over to your local game store and grab yourself a pack.

Come and join us in all sorts of gaming chat in our Facebook group here, and come follow us on Twitter @rollyoursix and Instagram join the chat, and tell us about your games!
Labels: Fantasy Flight Games