To be granted command of a VT-49 Decimator is seen as a significant promotion for a middling officer of the Imperial Navy. A heavily armed transport, the VT-49 Decimator is one of the Empire’s most feared warships, often used to provide long-range reconnaissance or to deploy raiding parties past enemy forces. 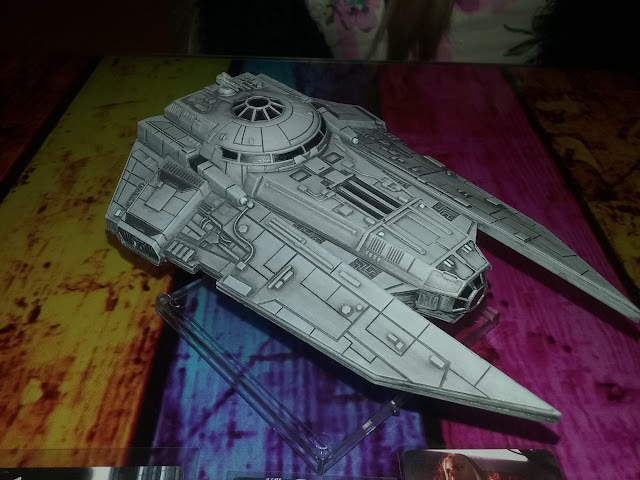 Its a big ship, and great looking too, but how to get the best out of it on the tabletop... that's what I will be looking into here.   I have created a couple of builds, only using the cards that come in the pack with it, so you do not have to worry about tracking down those obscure upgrades.  So lets dive in and see what this beast can do. 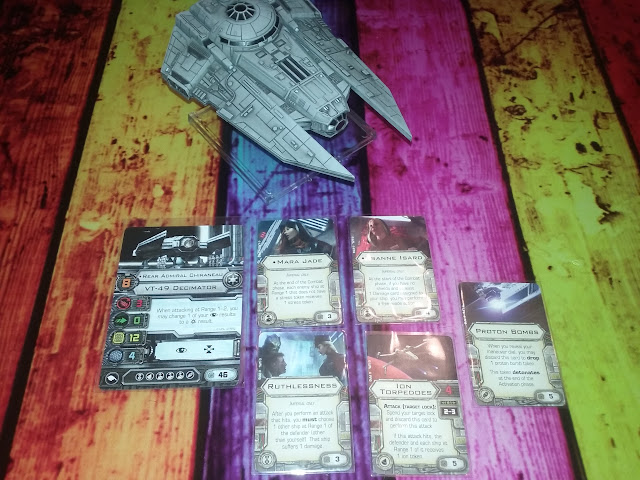 As a basic ship the Decimator has a  360 degree attack of 3, so it hits hard and hits all around it as well.  in this first build I have taken Rear Admiral Chiraneau.  His skill of 8 is nice and high so he should be moving close to last and shooting early.  His ability allows you to change a focus to a critical hit when attacking at range 1-2 so you want to drive in close to the most out of this ship, which is fine as with its heavy hull of 12 and shields as well it is able to survive a beating.

For upgrades we have Mara Jade in the crew slot, she lets you put a stress token for free on any enemy ships at range 1 that do not have them at the end of combat.  Since you want to get in close, this is a bonus as it allows you to predict where your enemy will end up, and stay on their tail.  Ysanne Isard allows you to get a free evade token if you have no shields and at least one damage. With 12 hull that will happen to this ship, and it will actually provide you a guaranteed evade as the ship has an agility of 0.  In the elite talent slot Ruthlessness allows you to put an extra 1 damage on a ship at range 1 of your target, but it could be yours, so make sure you are turning this thing with support out of range.  Proton bombs provide a nice deterrent if the enemy wants to try tailing you, combined with firing the turret it should keep your rear clear, which is good as this ship turns like a barge!  The last upgrade we have is the Ion torpedoes, they cause a damage and an Ion token at all things at range 1 of their target.  Its a real good way to hurt formations of enemy fighters.

This ship is a tank, it comes in and hits hard whilst soaking up the damage, I have had some real fun with this build. 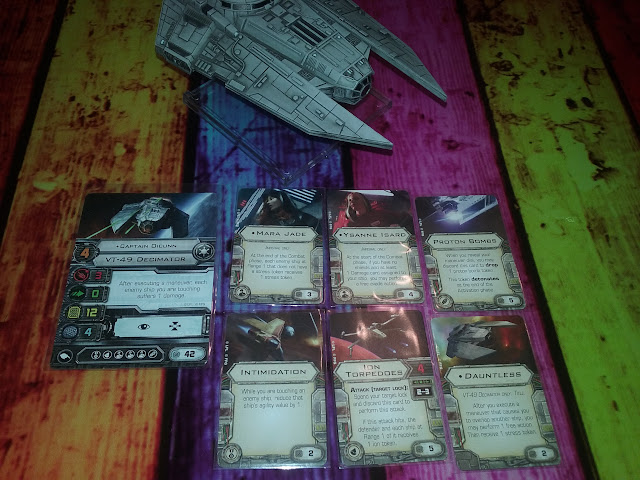 For build two, we make a couple of changes, we jeep the bombs, torpedoes, Mara and Ysanne.  For what they do see above.  We change pilots to Captain Oicunn, he causes a damage to any ship he is touching after he has manoeuvred, so ramming speed with this one!  intimidation works nicely with this, by reducing the agility of any ships you are touching by 1, allowing your other fighters that are supporting to cause maximum damage.  The final card is the title Dauntless, it allows you to perform a free action after you overlap another ship at the cost of a stress, well worth doing though to drive in the middle of the enemy supported by TIEs.  This ship build is great fun ramming speed scares your opponent nicely, and backed up by cheap TIE fighters it can cause all sorts of havoc on the tabletop.
Give these builds a try, if you come up with any other fun ones for your Decimator, let us know!
﻿
Labels: ship build Star Wars Xwing