Ah Wrestling.... in my day it was Ultimate Warrior, Big Boss man, and Hulk Hogan... in those days you 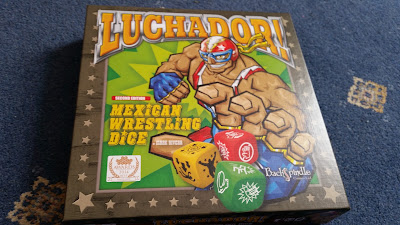 always wondered if wrestling was fake, but it was good showmanship none the less, though in mexico... that went much further with their high flying Luchadors.  Now its time to get that fast paced play on the tabletop....

The fast-rolling, hard-hitting, body-slamming, neck-crunching, chair-smashing, table-slapping dice game for 2 or 4 players...
Luchador! Mexican Wrestling Dice is a two-player dice game (with optional rules for four-player tag-team play) based on the popular world of professional Mexican wrestling, or "Lucha Libre" (a.k.a. free fighting).

Nice eye catching artwork on the front tells you pretty much all you need to know about the game!

It has ages 8 and up on it and can play up to 4 players so lets pop it open... take a look inside, see how it plays and what we think as I had Olivia "volunteer" very easily for this one....... 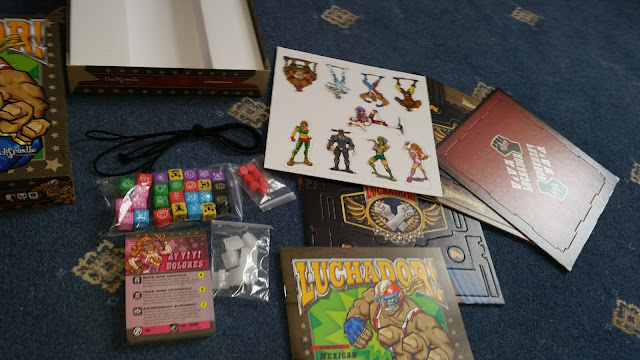 SO inside the box, a big bag of lovely dice, some punch out tokens, boards, and cards.... all nice quality bits and bobs and the rulebook which we will come to later, dont worry its easy to follow and well designed.... but has some extra treats. 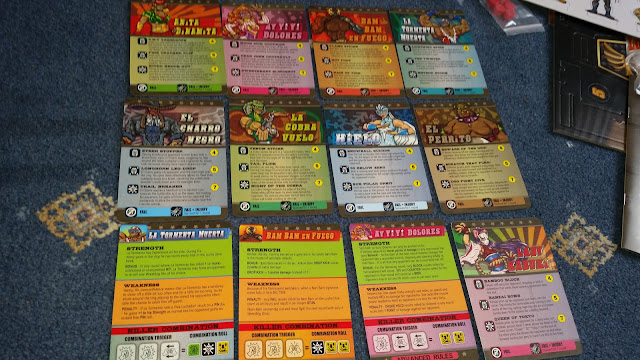 There is a good selection of characters, and also a ncie even male/female split which always gaisn points with Olivia.  Each with suitable cool names, like Olivias Favorite Hielo, and my favorite, El Charro Negro.  They each have a colourful card with special moves, yes they all do the same damage at the 3 levels as the other characters, but they have some real nice fun flavour text.    Also you get a card so you can play the advanced version, where characters have strengths and weaknesses and their own special combo s of dice that give them moves, this really helps them make feel individual and brings the game to life more, but its optional so you can play fast and simple, or more in depth. 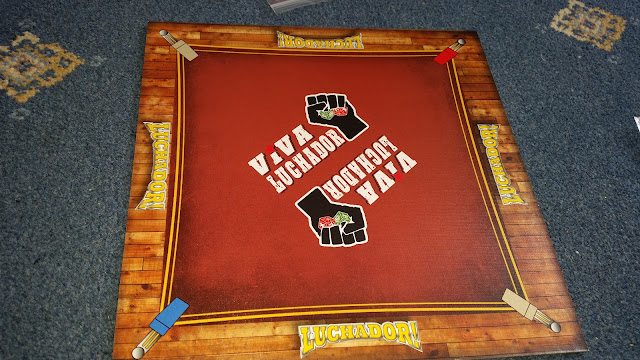 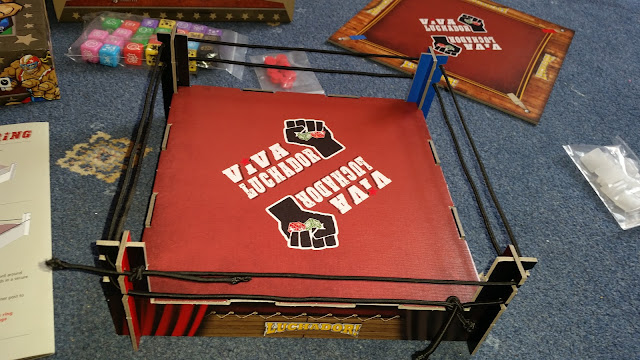 build the board they provide!! which is blooming epic!! and really adds to the atmosphere of playing the game

Players start with 21 points of health (or 18 in a tag-team match) and roll custom dice to try to either reduce the opponent's strength points to zero to win by a knock-out (KO) or hold the opponent down on the mat for a "count of three" to win by a pin.
The player sitting near the 'red' corner of the wrestling ring uses 4 'red' wrestling dice, the player near the 'blue' corner, the 4 blue wrestling dice. Though there are colours for each wrestler. 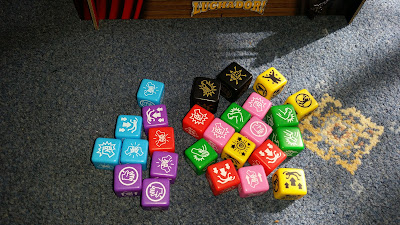 Each player also has a HIT die and a PIN die.
Players begin by each rolling their own set of 'wrestling dice' at the same time, trying to ensure that they land in, or touching the wrestling ring.
The results of HITs, BLOCKs, COUNTERs, and MISS rolled are played off against each other then the HIT dice can be rolled to see what damage they did. i.e Drop Kick, Forearm smash, Table slam etc. Damage is recorded on the Strength Score Card of the player being hit. 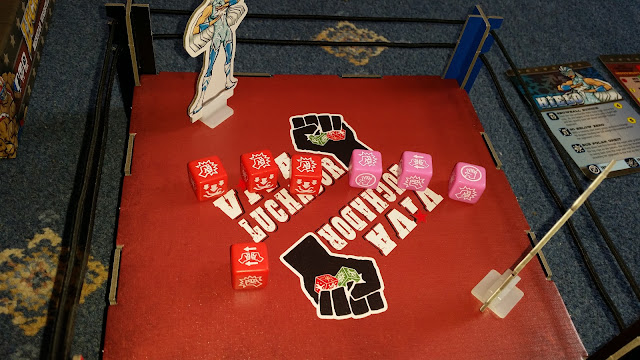 There is a table you will use for your first few games in the rule book that just tell you what the main symbols mean when you attack, what cancels what and such like. 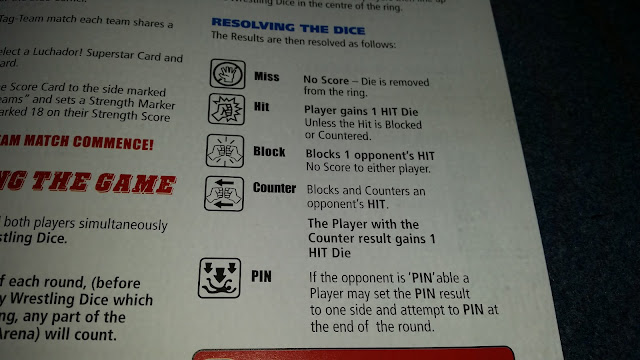 If a player rolls two HITs in one round, instead of rolling the HIT dice twice, they can take a chance on the Luchador! die once which may result in their wrestler's trademark moves and inflict much more damage on their opponent, and i can tell you Olivia rolled blooming well with that and it hurts!

or you pick up the green dice, roll them for damage and compare the symbols with the moves on your card with everything from backhand chop to table smash! then work out the damage down and adjust your health counters. 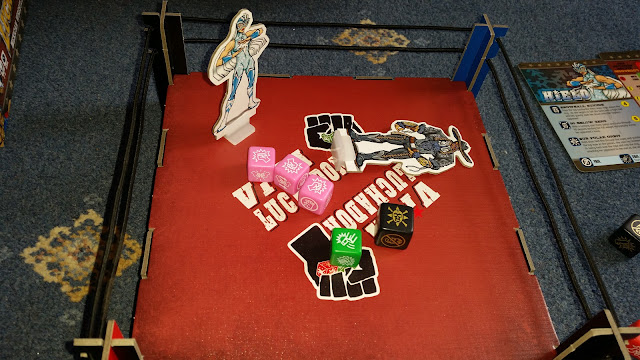 Any PINs rolled in a round may be re-rolled, once only. However once an opponent is reduced on their strength to where they are pinable, the PIN die is held until after the HITs have been inflicted then the PIN die is rolled. If PIN comes up, the 'three count' begins. The player being pinned has three attempts to save, using their wrestling dice or lose the match. 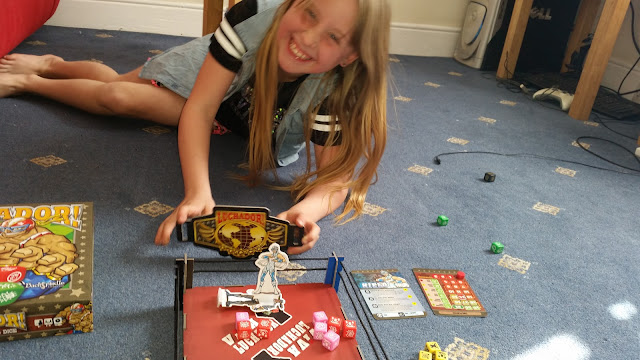 In a tag-team match players have the choice of trying to tag-out to regain slight strength, but it can also cost them..., if they fail to tag and get dragged back into the ring by their eager opponent. 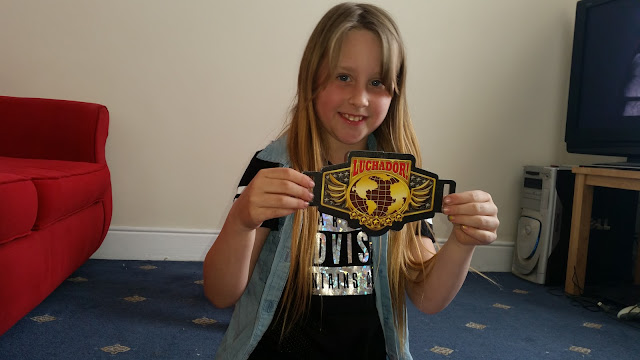 You can also knock your opponents dice out the ring with yours too, and they wont count!

There are other fun modes too to try, tag team, cage matches, all sorts of little extra bits for some more variety, but at its heart, its a fast, fun dice rolling action game, ad things do get quite excting.  Its well worth a look f for a fun family game for all ages to get involved in.

Its fun, and fast to play, and easy too.  I like it has girls in it, and they kick butt too! the dice symbols are easy to see on my card so i can play this easily. I think other children my age will love it too, and their parents as well, because there are not many rules to remember and it gets exciting doing a table slam on dad!


It comes in with an RRP of £24.99 so head on over to your local game store and grab your self a copy and have some nice simple fun.

If you like this.. its well worth trying out King of Tokyo too for more dice chucking fun.