For the First time in a long time, I have got my hands on a ship that is a new race in game, well to me.  The 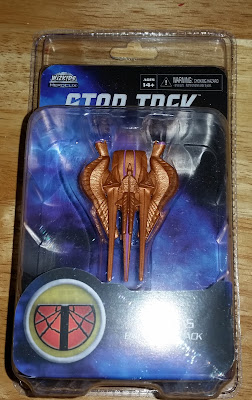 xindi.. this is a Xindi reptilian ship, so dates from the Enterprise Era, though we know so little of Xindi in later times you could still use it really.

The Muratas is a Xindi Reptilian Warship class ship. The Reptilians' main design during the Human conflict is a unusually delicate design with a long twin "tail." Engines are located in the pods on the forward arcing pylons, to either side of the central hull. Armament includes directed-energy beam weapons, with emitters located on the leading edge and the lower midpoint.

With this being my first look at Xindi, im not sure what to expect, but lets pop the pack open, and take a look and see what we do get inside, and go through the cards to see if this will make a suitably fearsome opponent for the Enterprise Era ships.

So lets pop it open, take a rummage and see what we get, and if its any good too! 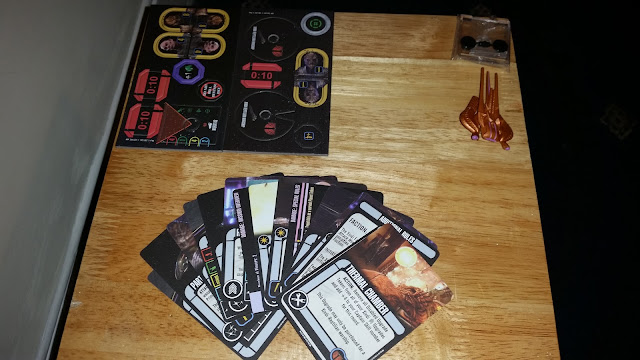 Annoyingly like a lot of the new ships, it does NOT contain all the tokens you need to play straight from the box, no shields, no target lock, no evade token, no scan token..... This is pretty poor really, as newer layers may not have everything, so if a ship has the need of the tokens i DO expect them like in Xwing,  at least the shields!!!  Poor show Wizkids, i hope the rest of the pack is good! 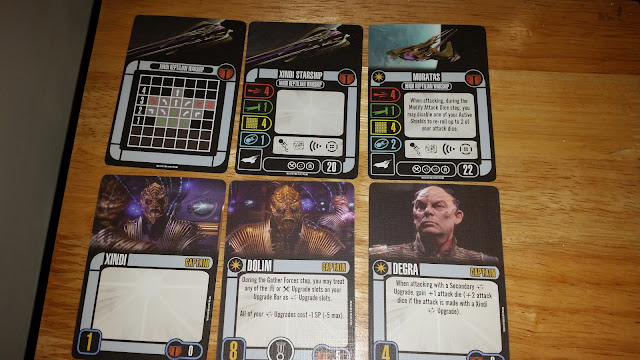 The ship itself, fairly solid set of moves, a 3 speed come about which is a nice move.  Then as always the generic and named ship.  For the cost shes pretty solid, high firepower, low agility good hull, low shields, so nicely balanced.  The named Muratas has a nice spread of actions, evade, Scan, target lock and battlestatsions.  Her named ability lets you disable an active shield to reroll up to two of your attack dice.  Useful but dropping shields on this when in firing arc of something else may not be a good idea, but if you are out of arc.. go for it!

We get a generic captain as always, and then at skill 8 Dolim.  He has an elite talent slot, and during the gather forces step lets you treat  crew and tech upgrades on your bar as weapon upgrades, and weapons cost 1 less, so therefore you get some nice discounts by counting as weapons.

Degra is skill 4, and he gives you an extra dice when attacking with a secondary weapon, 2 extra if its a Xindi weapon, making him pretty hefty hitting. 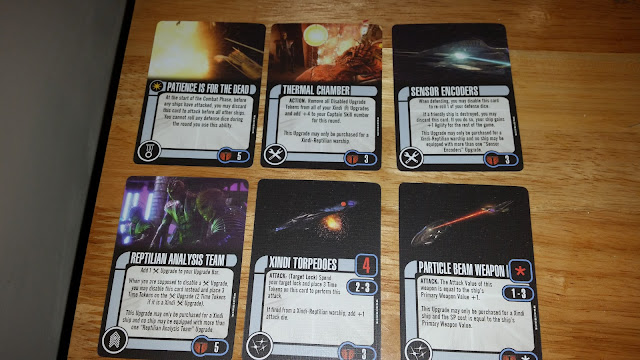 The elite talent for the pack is Patience is for the Dead. You can discard it to attack before all other ships, but at the cost of no defence dice.  Very useful though in the right circumstance if you want to cripple that high captain skill ship early on.  Thermal chamber is a tech upgrade that provides the action... remove all disabled tokens from your crew and add 4 to your captain skill. Handy if you need more then 1 crew at the same time, or just a boost for your captain.   Sensor encoders can be disabled to reroll a defence die, or discarded to add one agility when a friendly ship is destroyed.  Pretty useful all around i think!

Now onto the punch this ship can dish out, and its no slouch normally, but add on some Xindi Torpedoes for a 4 strength attack, +1 if its a Xindi ship firing so 5, but then if you have the right captain, add another 2 tot hat making it a scary 7 attack weapon.  Then the particle beam which is equal to the shops base attack plus 1, so again another strength 7 weapon with range 1-3.  Certainly a fearsome beast of a ship!! 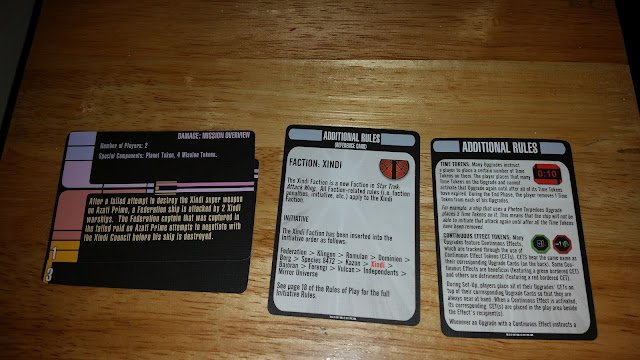 You also get a new 2 player mission, and the additional rules cards explaining where Xindi go in the initiative order and about time tokens too. 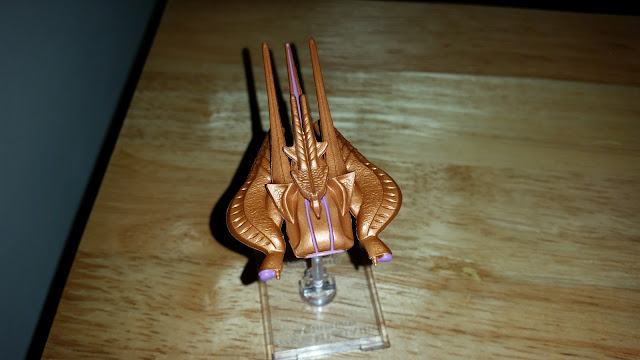 The ship itself is true to the on screen version, and a nicely detailed model,  though the colour is a bit.... garish, but nothing a wash wont fix and leave you with a rather nice looking ship with plenty of toys that can hit rather hard too! 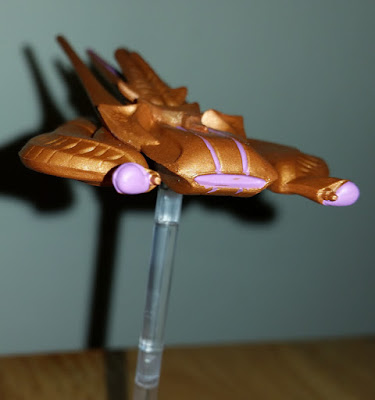 with an RRP of £14.99 you get a beast of a ship that can mix it up easily with the very best the other races have to offer,  so head on over to your local game store and grab one.
Come and join us in all sorts of gaming chat in our Facebook group here, and come follow us on Twitter @rollyoursix and Instagram join the chat, and tell us about your games!