Ahhh, pulp science fiction. From Buck Rogers and Flash Gordon in the 1930s Astounding Science Fiction and Amazing Stories of the 1940s to some great films like This Island Earth.  Sci fi up to the 50s had a certain style all of its own, bubble helmeted adventurers, rocket ships, and blasters.  Counterblast wants to take us back to those heady sci fi days, rather then look at the “Grimdark” sci-fi many modern games are set in. 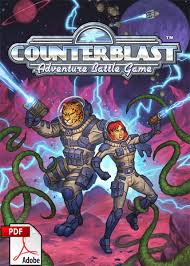 COUNTERBLAST features five player factions, each offering a unique style of game play with distinct characteristics and abilities depending on the composition of your Crew. The Galactic Defense Force consists of a diverse collection of humans and aliens bonded together for the greater good of protecting and serving the Outer Reaches. The Neiran Empire is ruled by a cruel empress bent on dominating the galaxy by force or by cunning, whichever is most profitable. The Mekkus consist of legions of mindless automatons dedicated to wiping all living beings from existence. The most mysterious danger in the galaxy is the mind-bending Edo who strike suddenly without warning, overtaking prey with their powerful tentacles and telekinetic mental blasts. Lancers are a hodgepodge collection of agents, freebooters, ship crews, and rogue salvage teams who sell their services to corporations, independent planetary governments, and private interests.

The game works with fast skill-based, streamlined rules, evocative of pulp serial adventures. The core rulebook contains all mechanics for movement, shooting and melee with details for unique situations like cover, opportunity fire and vehicle combat. Additional rules cover character conditions during combat, advancement as troops become more experienced, and campaign guidelines for running continuing storylines. It also covers details of the settings, viewpoints of the various factions, hazards they may encounter, and other background material on the rich frontier worlds your troops will inhabit, explore, and confront throughout your games.


It’s a skirmish level rule set, which is great as you only need a hand full of figures a side to form your “crew”. It also uses a D10, which is a nice change, and can create a larger range of results.

The book itself is small format, almost like the old “digest” style stories of the 1930s and 40s.  It is black and white, but does have some great artwork and background in it.

There are five factions are included in the Counterblast main rulebook….

The Edofleini who are a classic tentacle bug eyed race and one of hephs favourites. 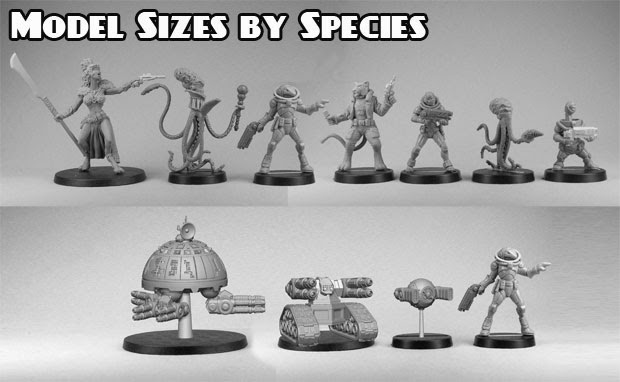 The Galactic Defence Force made up of alien and human races who look to protect the galaxy, all in classic armour with domed helmets.

The Lancers, who are a mix of pirates, mercenary’s and privateers, a good faction to create your own storylines around as they can represent most things well, and have a mix of humans and aliens with the odd robot too, so there is a ncie variety of models, and being a rag-tag bunch a nice chance to try different paint styles. 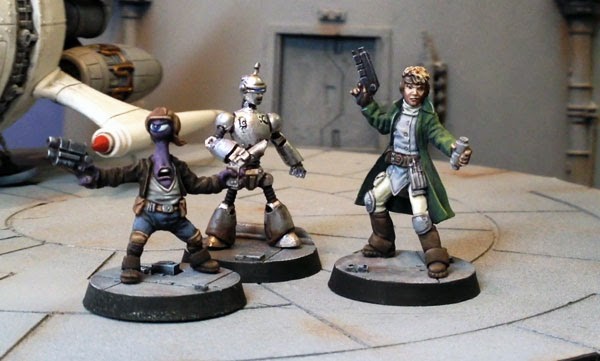 The Mekkus, a machine race who ae not too keen on living things 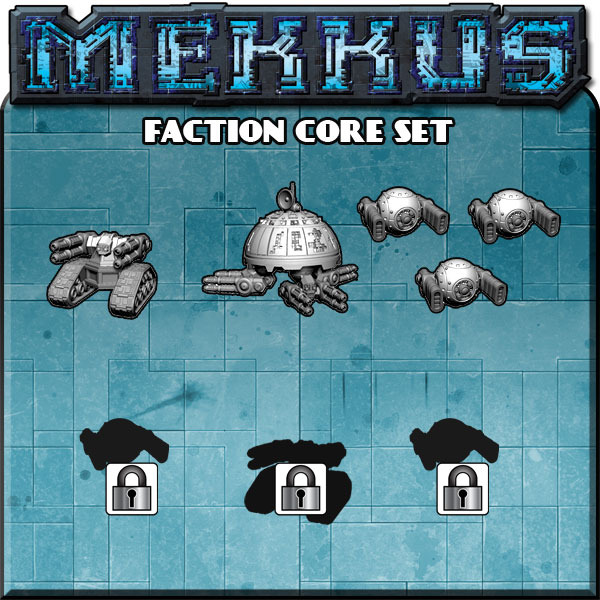 The Neiran Empire, a matriarchal society of humanoid aliens, tall, strong, proud, and deadly, and also some of my favourite models in the range.

Each Crew will have their own stat card that lists all their stats, attributes and weapons, to save you flicking through the book.

Then onto playing, and you get to choose what kind of mission your crew will be doing, they could range from capturing something, assassinating a member of the enemy crew, establishing a base of operations, all sorts of different things.  And of course your mission may well be different to your opponents, so you will never be quite sure what they are up to, which is something I really like. 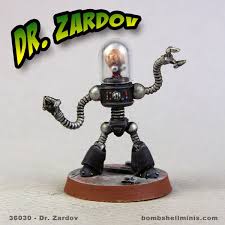 The basic phases in a turn are….

Initiative – Each player rolls a number of ten sided dice equal to their Leader’s Command level, looking to roll five or higher, most successes wins imitative.


Action Phase – This is where the bulk of choices are made. You alternate activating individual crew members or groups of figures.  Each crew member can perform up to two actions but only one may be an attack, so it could be a move an attack, use an item, and so on.

Operational Action – Crew can use Psionics, Use an Item, Use a Skill, or Rally.

Crew Casualties – Any crew reduced to either zero Body or Mind is removed from the battlefield and your opponent gains the points it cost as victory points.

Upkeep Phase –If you have suffered casualties, total the levels to determine if there’s any Panic. If the total levels lost is higher than the  command of a crew member they’ll have to roll to see if they begin to skedaddle, have a harder time performing actions,  or if they stay and stand their ground. Leaders can also aid in the skill check if they’re in range helping to try and mitigate the effects.

When the game finishes victory points are totalled up for any casualties you inflicted, and mission objectives you accomplished, then you look at the difference for the level of win (or defeat) A nice touch is the campaign mode, that awards points you can use to improve your crew.


The game is fast paced, and fun to play, and the rules are easy to grasp once you figure your way around the stat cards you will be away, with only a few checks to the book so see what things do like Psionics for example, or the effects of a certain type of weapon.  I like the way the missions work, by choosing my own objectives, it really helps me form and tell my own stories in game, and the fact I cannot be sure what my opponent is up to, is he trying to kill my leader? Or does he have other nefarious plans.

The models for the game are beautiful, incredibly well sculpted, and full of character

With Bombshell miniatures coming out with more and more stunning models it’s a great time to get into the game, there is a large range of models out already, and only more to come.

You can also get the rules in PDF format, but I can only comment on the book having only seen that one.  It would have been nice to have it in colour, and maybe a big larger to make it easier to read, but in its current format, it’s still nice.

If you want to bring back some fun to your sci-fi and love the idea of dome helmets, ray guns and rocket ships head over here
Labels: counterblast