Luna by Stefan Feld from TMG unboxing and review 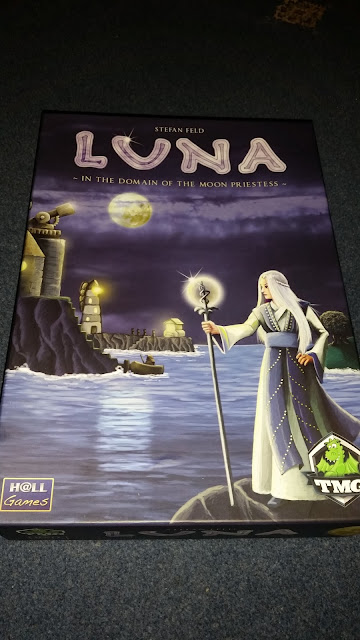 Luna.... Its one of those games that the cover on the art grabs you first, before you even know what its about, it draws you to it.... so what is this pretty looking game?

"The end of her regency is nigh. It's time to clear the way for a new bearer of the burden. She will keep a wary eye on the novices representing their Orders and trying to win her favour. Eventually, she will have to come to a decision. Which Order will prove itself worthy to decide on her successor? There will be a new Moon Priestess and she will bear the title: LUNA."

"LUNA" is the title of the Moon Priestess, and before her very eyes, each of the up to four Orders (players) competes for the right to decide on her successor. The players are the heads of the Orders who try to convince the Priestess they are the best for the job. Over the course of several rounds, they need to collect as many influence points as possible by skillfully placing their novices to achieve that goal.

The players move their novices over seven islands surrounding a main temple island. The novices are placed according to the "worker movement" principle, i.e. they aren't placed at the beginning of a round, but instead start where they ended the round before. Thus, novice movement is an important part of a round: Only if you're in the right place at the right time, you'll gain the deciding influence points. You'll have to build new shrines, work at the temple, and participate in the Priestess' divine services. But don't forget to recruit additional novices or win the favour of the local Priests; these are vital means to prepare and combine the diverse actions.

LUNA: In the Domain of the Moon Priestess is a challenging tactical game with strategic and interactive elements that takes about 20-25 minutes per player. The different placement of the islands and novices at the beginning of the game creates a different feeling each time you play and opens up new strategies. 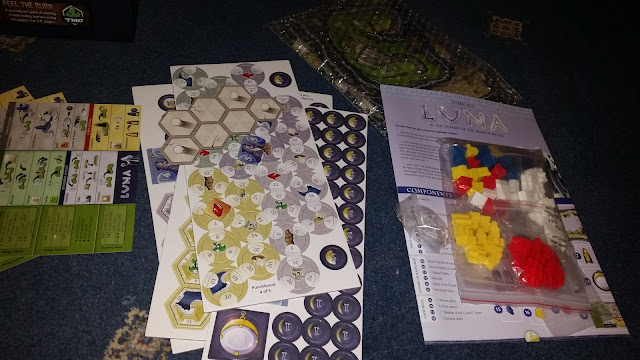 You can see you get what at first appears like a scary and confusing amount of tokens and bits and pieces, but it DOES include baggies so you can separate and store them all, which does make things a lot easier and is really a must do to save time and stress later on down the line! 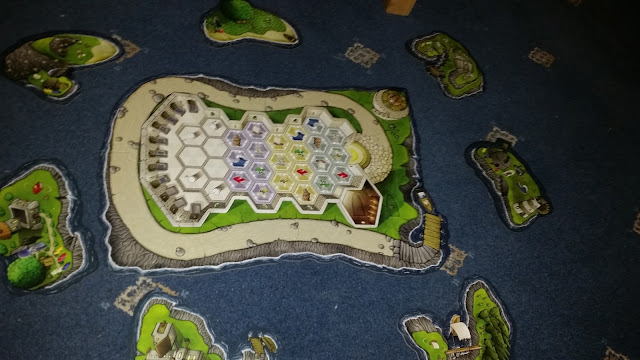 The game board consists of one central large isle, containing the temple, and 7 smaller isles. All laid out on a table the setup may look complicated, but you will get used to it, and it looks beautiful though... so is well worth it. Each player starts with 4 groups of 2 novices and a shrine, each assigned to an island. Moving around the islands are the Moon Priestess Luna herself, the Builder, and  "The Apostate". Each player also starts with one novice in the temple, holding a book of wisdom. 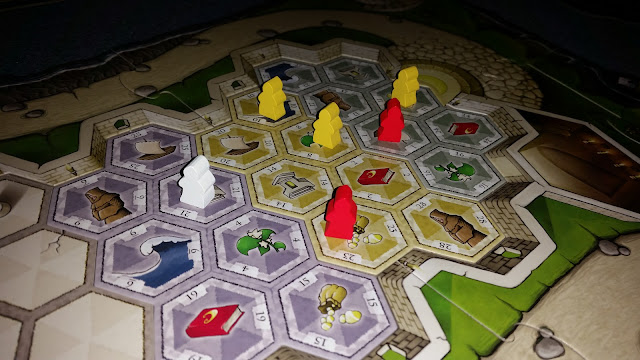 Players now have five game rounds to convince the Moon Priestess to choose them as her successor. Each player, in turn gets to choose an action from among a quite large list of options (luckily you get a gameboard with these printed on them for reference) Players can:

- Gain a favour: each island has special favour tokens. These allow you to perform various actions. To gain the token, you need to deactivate (take off the island and put next to it) 2 novices (or 1 if you have a shrine on the island).

- Recruit: Deactivate 2 novices, then add a novice (deactivated) from your supply. 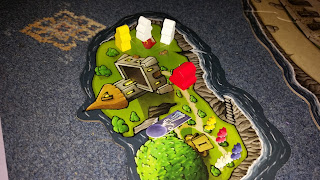 - Herbs: hand in a "herbs" favour to reactivate 2 novices on an island.

- Journey: Take any number of active novices, and place them next to any isle (deactivated).

- Tide: hand in a "Tide" favour to move any number of deactivated novices to other islands (they remain deactivated).

- Boat: hand in a "Boat" favour to move up to two active novices to another isle (they remain active).

- Promotion: All around the temple is a path consisting of numbered tiles which correspond to the 7 islands. To claim a position, deactivate 2 novices, and move one of them to the tile corresponding to the island they were on. However, the accessible tiles are limited by the temple guardian, because you can only promote to tiles behind the guardian. At the start, only a few tiles are available, but at the end of every game round, the guardian moves towards the temple, and more tiles become available. You can promote to a tile ahead of the guardian if you bribe him with a "Gold" favour.

- Sanctification: Move any tile you have claimed from the path around the temple to the inside of the temple. Inside the temple is a grid depicting all the temple tiles, simply place the tile on its corresponding place. Any other novices around this spot, standing on lower numbered tiles, are removed from the temple, unless they hold one of the books of wisdom. Moving a novice inside the temple scores you points depending on the round (6 for the first round, 5 for the second, and so on), and 1 point per displaced novice. To sanctify a tile ahead of the guardian, you must again pay a "Gold" favour.

- Book: Hand in a "Book" favour to steal a book of wisdom from any adjacent novice in the temple. Score 1 point.

- Expulsion: You remember that nasty apostate fellow I mentioned. Well, he's bad news, so you can use an action to kick him to the curb. Deactivate a number of novices to move him that many islands clockwise. Great fun at parties.

- Meditate: There are 4 meditation tokens. Each time you meditate, remove one token. When the last token is removed, the round is over. Whoever removes the last token scores 1 point.

- Virtual novice: hand in a "Novice" favour to perform any action that requires deactivating novices. You need to deactivate one less novice for this action.

Players take turns picking one of these actions until somebody turns over the last meditation marker. Then, scoring occurs. 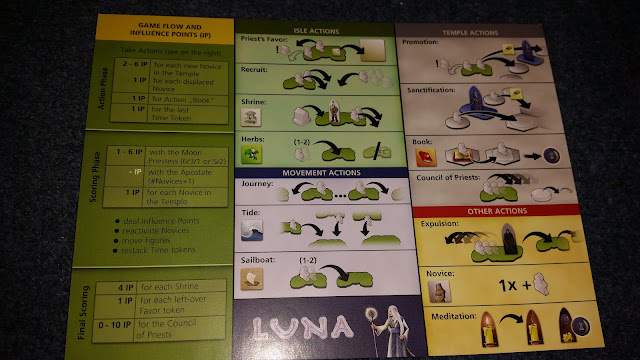 You score one point per novice you have in the temple. If you have novices on the same isle as the apostate, you lose 1 point, +1 per novice. If you have the most novices on the same isle as Luna, the Moon Priestess, you get 6 points, second most gets 3, third most gets 1. Then, all special characters move around the isles (according to the numbers listed on them), all novices are reactivated, the meditation tokens are returned, and a new round begins. After 5 rounds, players score one last time, plus 4 points per shrine, +1 point per favour token left over, and 0-10 points for position on the council of priests. Most victory points is the winner. Easy right??

Its not a simple game by any means, but its mechanics and the choices mean there are lots of ways you can play and plan to get the most out of your novices every turn, but you also need to keep an eye on where you will want them next turn, and how you can move them there. You will need to keep track of the favours you want, and how to get them.  Whilst all of this is going on you will need to watch out for your opponents too, and keep an eye on what they are doing, thinking about what they may have planned too.

So... its a tough game to get your head around at first, but provides a lot of options, plus it looks lovely set up, there is something really soothing about its art style.  Not a game i would take to play with your new gamer friends, or people only just starting the hobby.  The right crowd though, and this will go down very well.

With an RRP of £54.99 its high, but the components are beautiful, heavy and there is a lot of "game" to be had in the box,  so head on over to your local game store and grab one.
Come and join us in all sorts of gaming chat in our Facebook group here, and come follow us on Twitter @rollyoursix and Instagram join the chat, and tell us about your games!