If you have read the blog for a while you may know I love WW2 History.  Having been brought up by my 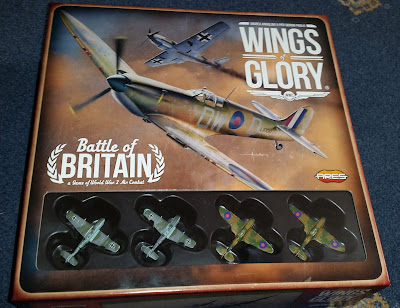 Grandparents both of whom where WW2 RAF, well and WAAF  had a love of military aviation from a young age.  Yes it involved all the books i could get my paws on, and Airfix kits hanging from my ceiling too, and a love of the classic war films, including one of my top 3 of all time films, the Battle of Britain, full of great air action. Growing up in Kent by the Thames in a place you could still the scars of the war on some bridges, and buildings, I often used to look up at the sky in those hot Kentish summers and imagine i was up there too flying a fighter in those days.... Of course i was only young, and yes i wanted to join the RAF, until I realized they didn't fly Spitfires anymore, it was just these "New Fangled" Jet fighter things..... so I had to make do playing with my Airfix, or diecast models, and making of course suitable sound effects.  Now.... Ares Game have done a rather fun WW1 air combat game with Wings of Glory WW1 which certainly scratches an air combat itch, but the chance to push Spits around making suitable noises? and even play missions defending my town (which was regularly heavily bombed) that's too good a chance to pass up, but... is it good? well read on...... 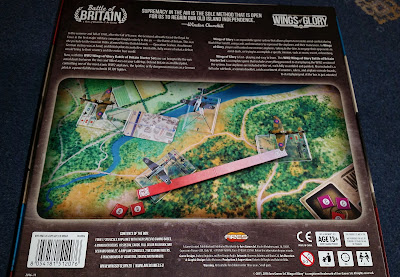 In the summer and fall of 1940, after the fall of France, the German Luftwaffe faced the Royal Air Force in the first major military campaign fought entirely in the air — the Battle of Britain. This was the prelude to the invasion Hitler planned for the British Islands — Operation Sealion. An ultimate German victory was at hand, and British pilots bravely flew into battle, fully aware of what a defeat would bring to their country and the entire free world.

Now, with this Wings of Glory: WW2 Battle of Britain Starter Set you can bring to life the epic aerial duels between the Axis and Allied aces on your tabletop. Defend Britain as an Allied pilot, controlling one of the most iconic WW2 airplanes, the Spit fire, or fly dangerous missions as a German pilot in a powerful Messerschmitt Bf.109 fighter.

Wings of Glory is fast–playing and easy to learn. This Wings of Glory: WW2 Battle of Britain Starter Set is a complete game that includes everything you need to play the WW2 version of the system. Four airplanes are included in this set, each fully assembled and painted. Also included is a full-color rulebook, a scenarios booklet, a rich assortment of counters, rulers, and airplane console boards to start playing out of the box in just minutes!

Righty... lets pop this beast open and take a look inside! 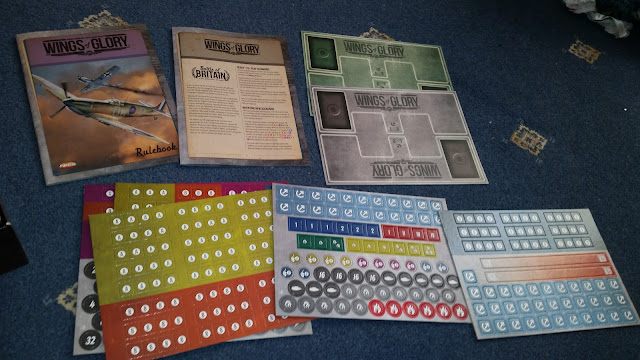 There is a hefty slab of card tokens and books when you pop the lid off for the first time.  These tokens will certainly keep you busy popping out, there are ones for all sorts of things which we will cover later on, but be careful not to mix up the damage tokens, so I would recommend getting some little baggies to keep your tokens in so they are nice and sorted.  You also get your aircraft "console" enough for 4 planes, a full Rulebook (unlike the Duel WW1 packs) and a scenario booklet too.  Both of these are pretty chunky publications. 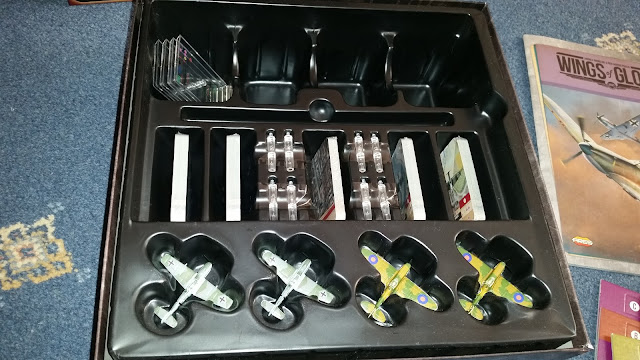 Then taking a peak into the box we see the decks of cards for each plane, another deck for special uses, bases, pegs, and the models of course.  These are SUPER secure in the packet,so be really careful when popping them out, they are quite fragile, and you do not want to break the props. 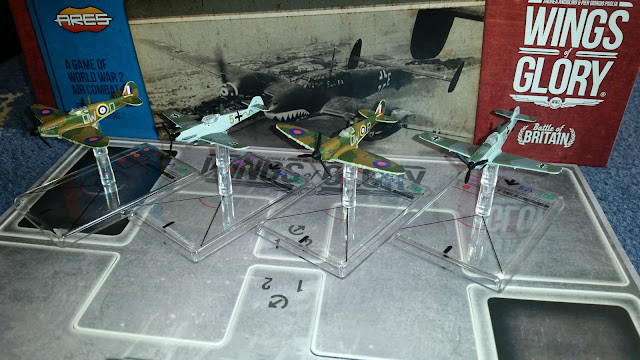 So you get two Spitfires with different markings for 610 squadron, and 2 109s in "Jabo" fighter bomber configuration with a bomb slung the fuselage which looks nifty.  The 109s again are both individually marked as JG2 with different call signs. 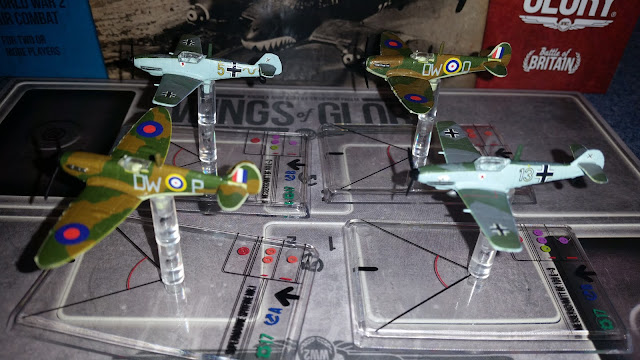 I think the models are great... really nice work, though i may still be tempted to give them a light wash just to show all the detail of recessed panels and such like.  I do have an issue though.... yes a pair of 109s makes sense as it was their standard and only fighter (not including the ME110 heavy "fighter" which proved to need its own 109 escort) but 2 spitfires.... no Hurricane!!! the plane that was the backbone of the RAF in the battle, and got more kills too..... hmmm yes you can get one separate, but still...... I think its an issue that she was missed from the starter. 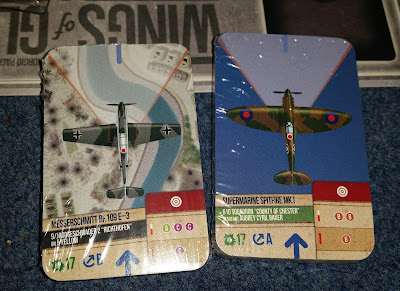 Each plane has its own distinct deck of cards for all the moves it can pull, and it gives you the damage it can take, and the firepower at long and close range... you can see at close range the 109 really hits hard with its cannons, but its firepower degrades at longer range.  Also, yes the planes DO move differently too to reflect the maneuverability of their real world counterpart.  Each Plane has their own deck, which is linked to them, and can often be a named historical pilot of the type of aircraft portrayed.  Though of course it could be anyone in your own game imagination. 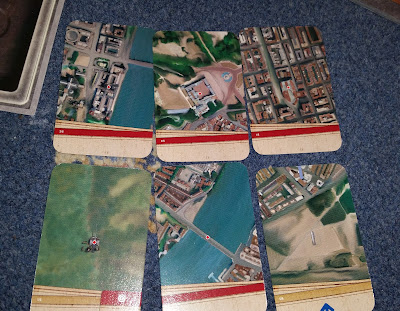 You also get a special deck of cards that cover all sorts of things, such as targets for bombing runs, or photo recon missions, and also AA guns too.  So yes the game has a whole lot more to it then just.. here is a fighter.. dogfight.  The rulebook contains rules for.... 2 seaters, with rear gunners, dive bombers, level bombers from the HE 111, and things like individual crew that can be wounded and re positioned too.  The game works on such a level that you can play a straight up nice and simple dogfight or mission, or add in details, like variable altitude (reflected) by pegs, speed, fuel levels, including things like droptanks, ammo levels, extra weapons, like rockets and bombs for ground attack work, rookie pilots, ace pilots with special abilities you can give out, even landings and take offs are covered... believe me there is a lot more! even solo scenario play options too, making this a really detailed game, but the joy of it being that you can go from simple teach it in a few minutes, to real in depth campaign game tracking fuel and ammo levels with altitude, and objectives with just bolting on the modules you want.  Very impressed. 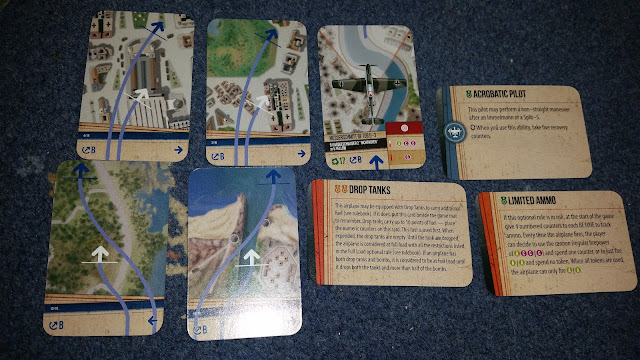 You also get special cards inside each of the aircraft packs with optional things you can add on, some may be to more accurately reflect the performance of the plane in question, or the pilot even, and others may be additions for the game.  The art on the move deck is great, and shows you two moves on each card, which reflect either high, or low speed, depending on what you are doing.  Just like Wings of Glory WW1 you place the card, and move your base to the arrow lined up with the appropriate speed. 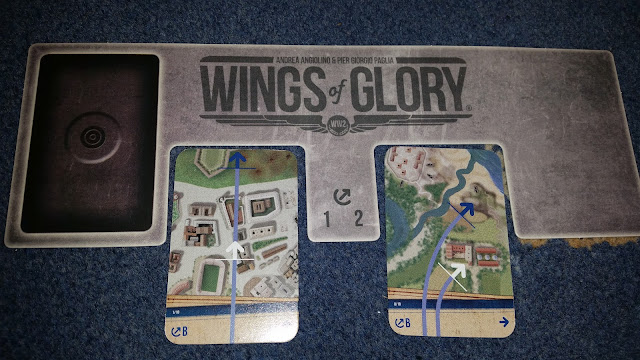 planning your moves are nice and simple... both cards are face up here to show you, but normally  card 2 would be face down, and when its your turn, you flip it and move it to slot 1 then replace with another face down. this way you can always see the move you last performed, which may have some relevance if you want to play special moves like loops or stalls, or hard climbs and dives. 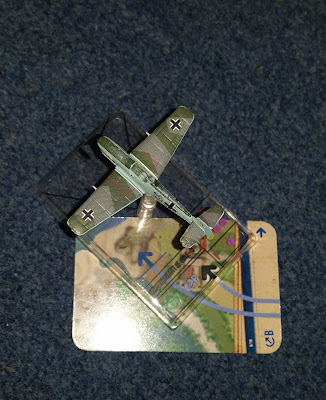 You can see how the arrows match up nice and easily, you then remove your card and that's that.  The turn then moves into firing, so you check your range, and then if in range open up with the relative weaponry, or if you are going for an objective mission, you see about that, if its bombing a target, or taking a picture.

The Rulebook inside is easy to follow, so do not be worried by all the optional rules I have mentioned. They are there to add to your game so can be put in or out at your pleasure, or at your experience level.

The Scenario booklet, will provide you with a huge amount of themed fun too, following engagements that happened, with background, and listing the involved planes, some you may need more expansion packs for, but it clearly lists them so you know what packs to pick up, and there are plenty that don't need them.  It follows the flows of the battles from probes, to strikes on radar stations to bombing missions.  Its a great way to get some thematic gaming going. 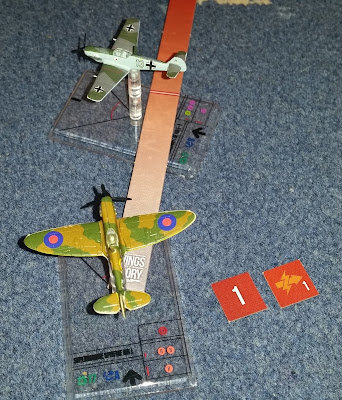 Combat works in the same system as the WW1 Version where you check your range, then your corresponding firepower at that range.  So in this case the Spit is at close range, so on the base says it draws 2 B tokens.... so your opponent will draw them, and keep them secret but follow any special damage, and soon as the plane has accumulated enough its removed. these range in numbers from 0 and up.... with special damage too like hear, the rudder is damaged so the plane wont be able to do any right moves for a few rounds but the opposing player wont know this.... some will of course be visible, like fire, or smoke.  The results of all special damage are shown easily in the rulebook.

It plays easily from 1 player (with the solo scenario rules) upwards in fact big games of 10 or so planes aside are easily manageable and great fun with a person in charge of each plane.  With the amount of depth, and bolt on rules, this set will keep you going plenty, and with other expansion aircraft for the game all covered this is all you will need to get into the game, and play around with more planes too.  Simple to teach, fast and fun to play, can be as complex or simple as you desire.... whats not to like? whispers... maybe the lack of a Hurricane in the starter box!


with an RRP of £69.99 for this its quite high for the components, compared to say Xwing, but there is a huge amount of scalability, and added rules that Xwing just doesn't touch on for depth and customisation, so head on over to your local game store and grab yourself a copy, remember aircraft noises are encouraged but optional!
Come and join us in all sorts of gaming chat in our Facebook group here, and come follow us on Twitter @rollyoursix and Instagram join the chat, and tell us about your games!
Labels: Wings of Glory ww2