Its been a while since we got to look at some ships for Attack Wing, but do not worry we are back, and starting with a repaint of one of favourites!

The Excelsior-class was a type of Federation starship used by Starfleet from the late 23rd century through the late 24th century. It was the backbone of Starfleet for nearly a century, making it one of the longest serving starship designs, and one of the most recognizable ships in the fleet.

It was the pathfinder and a transwarp drive testbed. In The Search for Spock, the ship was dubbed 'the great experiment' and was days away from its first test run. It was unexpectedly called into service to stop Admiral Kirk and his crew from stealing the soon to be decommissioned Enterprise. Attempting to use the transwarp drive to bring the ship back to spacedock, the Excelsior was sabotaged by Montgomery Scott and was left inoperable. Following the embarrassing failure, the Excelsior underwent repairs in spacedock before its recommission into active duty. It joined the attempt to rescue Captain James T. Kirk and Dr. Leonard McCoy from Qo'nos and then joined the battle to defeat General Chang over Khitomer.    It was also the ship aboard which Tuvok served as science officer. Commanded by Captain Styles in Star Trek III: The Search for Spock and  its more famous Captain,  Hikaru Sulu in Star Trek VI: The Undiscovered Country.  Shes a classic ship and class so lets delve further, see whats different... if anything, and what you get..... 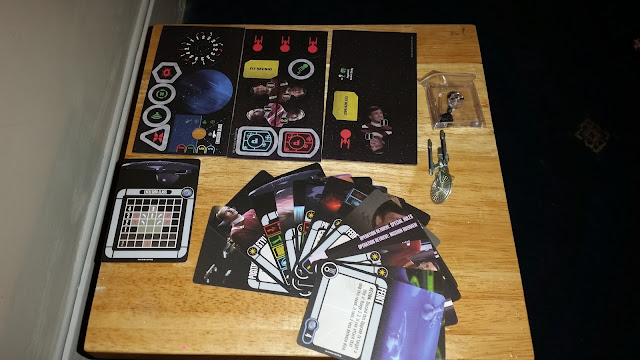 plenty of goodies come in the box, including all the tokens you will need

The ship as you can see is not the most nimble thing in the fleet, but she is old! so its understandable.  The reverse is handy. 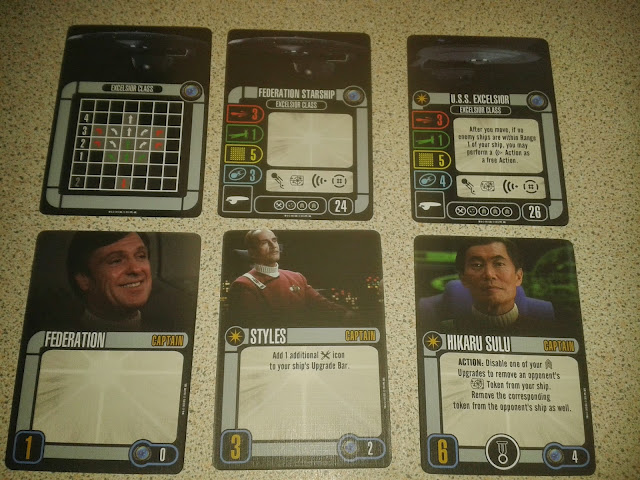 The ship has good firepower, poor agility, solid hull and good shields.  The named Excelsior's ability allows you to get a free scan action if you are not in range 1 of an enemy which is a great ability.  You get the most smug generic captain I have ever seen.  Captain Styles is handy at only 2points he is captain skill 3 and adds another tech to your upgrade bar.  Captain Sulu has an action to disable a crew to remove a target lock that is on you. 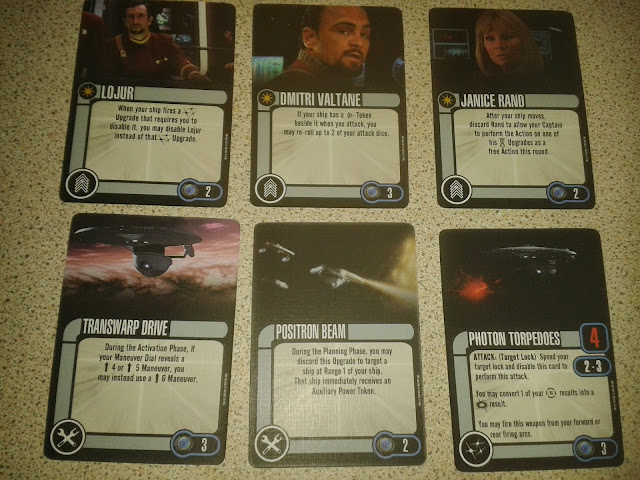 For crew we have Lojur, who you can disable instead of a secondary weapon.  Valtane who allows you to reroll 2 dice if you have a scan by your ship, which with the Excelsior's ability is really useful.  Lastly in crew we have Janice Rand.  You can discard her after your ship moves to allow your captain to perform his elite talent as a free action.  We have normal torpedoes as a weapon, always useful, and on the Excelsior with its 180 degree firing arc, and a rear arc, you can be covered and have very few blind spots.  We have the Positron beam in tech, which is a discard to put an auxiliary power on a ship at range 1 meaning you can predict its movement a bit easier.  The last card is the transwarp drive which allows you to move a 6 forward instead of a 4 or 5 ahead. It can provide a nasty surprise when your opponent expects only a 4 forward and you come steaming over to him. 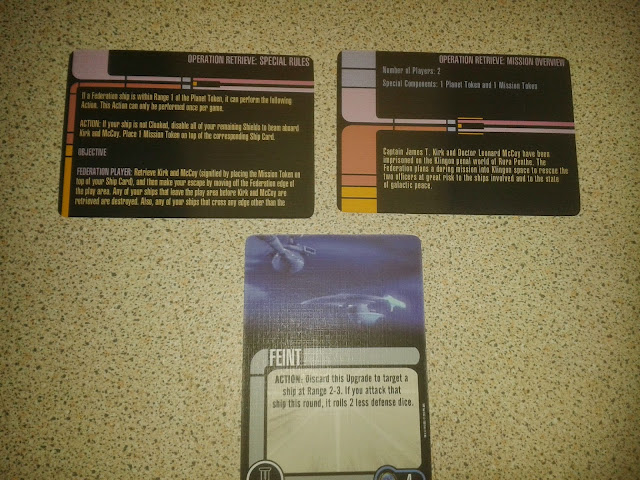 The elite talent in the pack is feint, which is a discard for an enemy to roll 2 less attack dice.  The mission is operation retrieve which comes from the film star trek the undiscovered country, where you must try and rescue Spock and McCoy from the prison planet, its challenging, but really fun, once more the mission really makes the packs worth while!

Now the repaint...... Wizkids claims the repaints are better then the original so lets see shall we..... 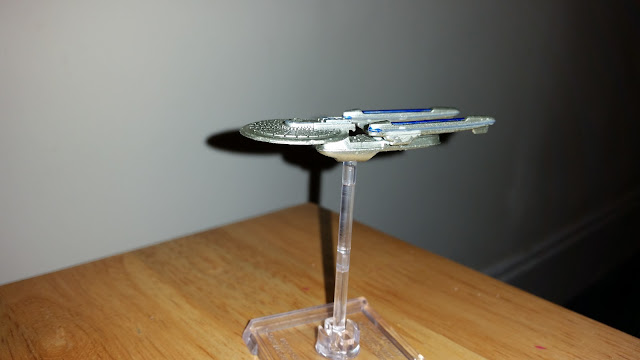 Its the same model as the original, just a differnt paint job... and honestly... not really a fan.  The original was actually much better, and the Federation with shiny silver line ships.... no.... doesnt work for me, apart from the Enterprise Tv series era that is. 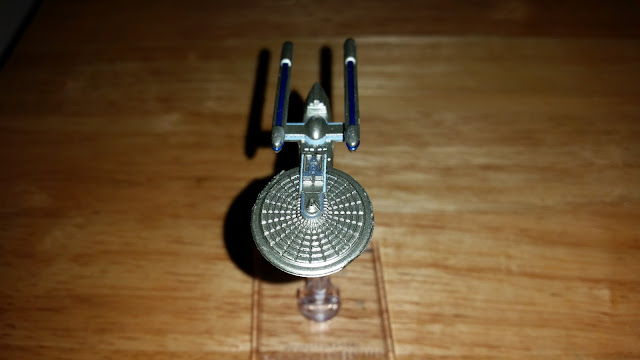 Its certianly a model that could benefit from a wash and/or a repaint.  Still though, it IS a good ship, so well worth getting for that and some excellent cards. 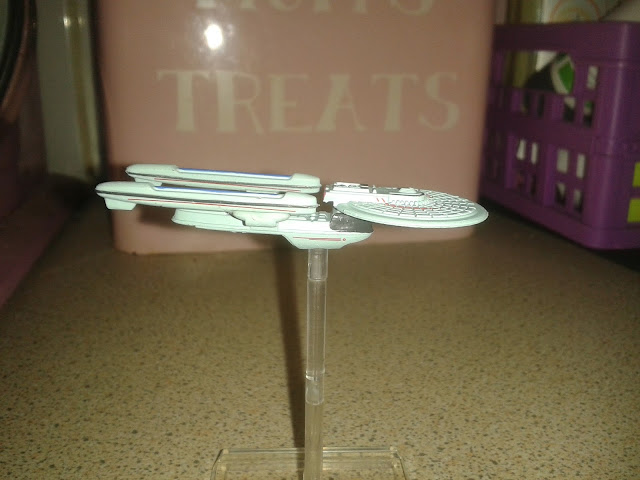 The original ships paint job is much better in my opinion, but do not let this put you off, and certainly if you are unable to find the original like most people do not hesitate to grab it!

with an RRP of £14.99 you get an iconic ship, that can be used from movie era all the way up Voyager and DS9 and TNG era with no worries! yes.. I DO prefer the originals paintjob vastly to this repaint, since the Federation don't really have silver shiny ships of the line... but a wash will tone it down nicely,  so head on over to your local game store and grab one.
Come and join us in all sorts of gaming chat in our Facebook group here, and come follow us on Twitter @rollyoursix and Instagram join the chat, and tell us about your games!