Prime your Pan.... for there is evil abroad this night!!  It is All Hallows eve, and the nights are dark in old England. A time when tales are told of things unknown that stalk in the shadows, things that hunt the ancient moorlands, sounds from unseen things in the oldest houses and churchyards.

In a country as old and full of stories, folklore and legends as England is, there is history everywhere you look and stories to find.  I encourage you all to look into your local history dig out the stories and USE them, look to your local folk lore and tales, we have a rich history here and this is a great way to use it.

So for our special Halloween review, we bring to you...... 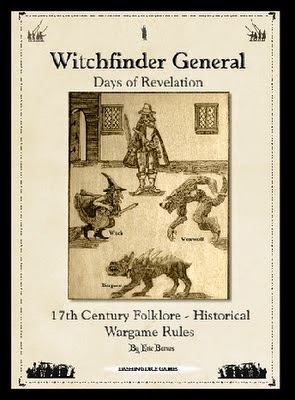 Witchfinder General: Days of Revelation is a game From Dashing Dice games, written by Eric Barnes.
It is set during the period of the 17th Century leading up to the English Civil Wars.
Courageous Witchfinders battle against the many vile abominations that plague a once green and pleasant land.  Clandestine vampire factions, aided by their loyal Guardsmen of Blind Obedience, secretly strive to gain ultimate power over a deceived nation. 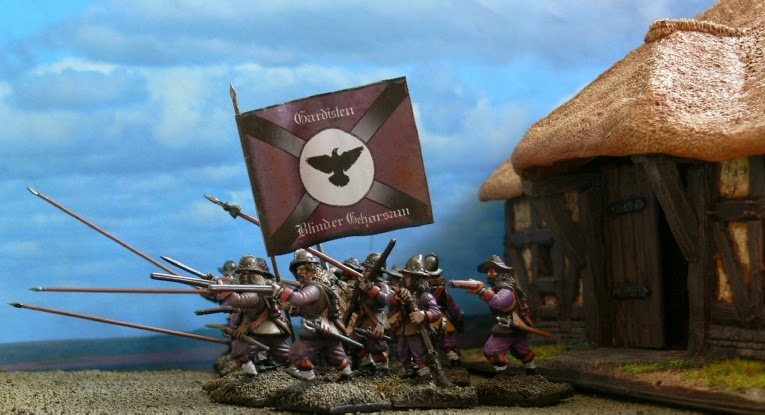 Cruel barguests create fear and mayhem across town and country. Evil witchcraft is rife; vicious werewolves savage the innocent and crazed noctelinger hunt in the shadows. 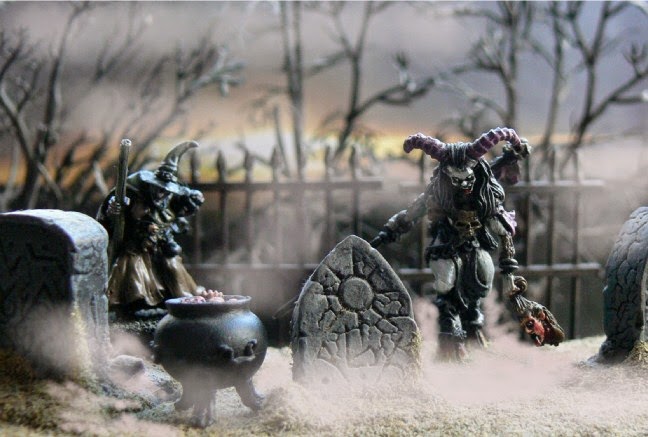 Designed for use with 28mm scale figures. (Morgan: So, perfect for those Empire models or new Perry's coming out, hm?)

So lets take a look at how it plays...... It is a skirmish game at heart, designed from a handful of models up to 30 or so a side, which is a large game.

It's an alternative activation game, you pick a singular figure, perform two actions such as move, take aim and fire, reload (yes you have to reload weapons in this game and pass an order to do it as well.  I love that), move into close combat or fisticuffs as the book calls it.  Then your opponent picks a single model or a group of 3 (which you can create at the start of game) performs his actions etc. then back to you. When both sides have exhausted all their models a new turn begins. It makes for a much more involved game then for example Warhammer, or even my beloved Mordheim.

Let's take a look at some of the mechanics.....

Moving is fairly normal, each kind of creature has a movement value, that's it. Different types of terrain affect it with a suitable minus. A nice touch is the variable to movement when it takes you in range of a "Dangerous" creature such as a vampire or beasty. For example 4 inches from Baddy A gives a d3 penalty.  Yes the game is in Imperial.

Line of site is considered model's eye view, which is fairly normal now. There are a great set of rules for jumping gaps, climbing, falling, picking locks, battering down doors and even using artillery (Morgan- WHAT)!  Plus foraging, yes capturing cows and chickens and all sorts of goodies! It adds some great minis to put on the table and allows proper raiding games to happen.

Shooting is on a skill value dependent on range, for example 3+ at close 4+ at medium and 5+ at long, with additional penalties for cover etc. Differing troops have differing abilities for shooting depending on their training. Also they have a reloading skill. After firing you have to reload if you wish to fire again.  If you fail the test you do get a plus one on your next attempt. I like it, it adds some nice tactical thoughts, such as do I want my musketeer to stay put fire, reload and be ready for the next turn? Or to fire and move?

Close combat is a base skill added to a dice roll, higher number wins, pushes opponent back and wounds, then you roll on the wound chart for a leg wound type which reduces abilities, or a wound that takes Constitution (life). Most models are one constitution so a good sword to them does them in! however the darker beasts, the vampires, and werewolves are more survivable, and more deadly.

The rules for terrain are solid and well written, which is good as some games can be very ambiguous with terrain rules in my opinion.

The army building part of the game is a bit difficult as there are no point values for anything. The games are meant to be play tested to be balanced, and when you play you are meant to alternate playing both sides to avoid any deliberate unbalancing. Not a problem for a garage gamer, but a bit off putting perhaps to some gamers. I am not too fussed but I would have liked points to make preparing a game a bit easier. There are rules for musketeers, pikeman, cavalry and dragoons, witch finders, apothecaries, werewolves, witches, barguests, noctelingers, vampires, preachers, angry villagers and clubmen. A nice range, but without points, its hard to judge them.  I would like more creatures, but there is always scope for an expansion book with this ruleset.

Some of the creatures have their own special rules: Cavalry can slash and gallop, as in they can charge to combat hit and move on, they can shoot on the move with a penalty but I like the ability it creates a great mental image of a roundhead styled cavalry man firing his pistol at some dark creature. 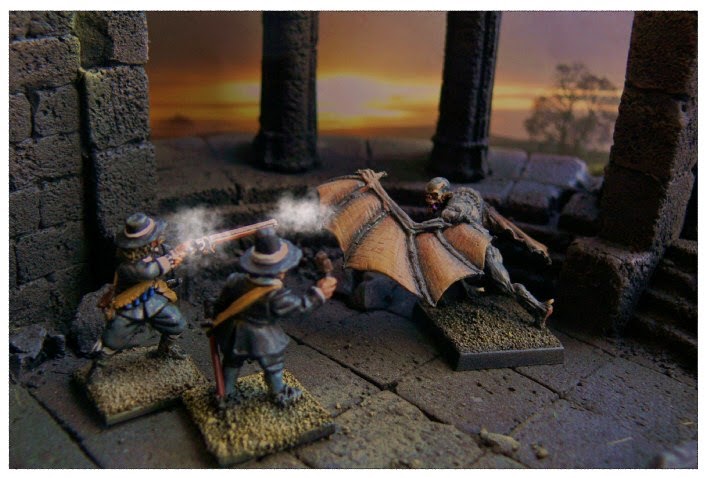 In fact there are some great little rules that stand out to me in this book, such as you can shot off your mount, and the direction of the shot matters as you are flung from your mount.  The on guard rule, which is a kind of overwatch and stops people sneaking up on you. You can try to be sneaky as well, all models have a stat for Senses, their ability to notice things. Of course a vampire's is better than an angry villager! The effects of fighting at night, or in the gloomy fog is handled well, with models being able to attempt to see a little farther as well, where some creatures are gifted with that naturally the darkest of creatures of course!

Simple things such as if you save against an incoming shot you have to roll a self control test to simulate being struck by the fear of it. They are nice touches that add the perfect atmosphere to this game.

There is a whole section of scenarios that link together for a story, they are well written, and tell you all the required models for each one.  The game has so much scope for making up your own scenarios and missions though, that these are just a good bonus

There are a lot of tokens to be used in this game, 11 different kinds in fact.  I see the need as the ruleset is simple to master but surprisingly in depth with needing to reload, models having lost self control (morale) or head down (ducking behind cover). There is a free PDF on the site you can use, but I am trying to figure out other ways, though I am not sure what if any yet can be done.

SO what do I think of the rules?  well... I like them, a lot in fact, I like the depth to them, the new ideas, and I like the period very much.  Being a staunch parliamentarian I will use my local forces (Plymouth was parliamentarian throughout the English Civil War whilst the rest of the west country was Royalist) to crush the forces of darkness! or I can use the rule set for some great ECW period skirmish gaming, but adding that element of the myths and legends makes it more into an almost RPG as well, with storylines you WANT to carry over to the next game, your models are heroes and villains instead of just numbers. 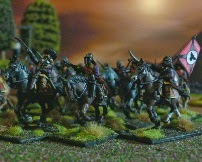 Now onto the book itself...... It is softback, a nice size though, glossy pages with colour and black and white images inside. There are lovely photos of models inside, and the best thing is each picture tells you the manufacturer of the model, making finding suitable troops nice and easy. It is well priced for what it is as well and can be bought from www.dashingdicegames.co.uk. You can also see their own first couple of minis there as well (expect a post on them in the future).

The cover is great in my opinion from an old wood carving of Matthew Hopkins, the infamous Witchfinder-General.  Come people say the cover is bland compared to the photos inside, I disagree; it instantly shows you what its about, well to me anyway and it caught my eye straight away. 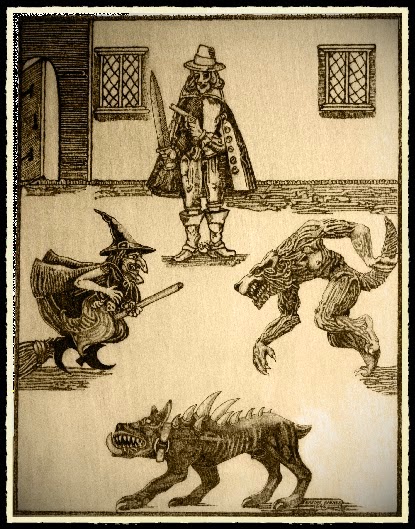 The book was nice to read, the rules are well explained. I do not feel like I left any section scratching my head as I have with some other rule sets. It contains plenty of examples for you to look at well.  There are some downsides though, I would love an index! there is a solid table of contents, but an index makes finding things so much easier! Also the way the text is laid out with "rules" in bold meaning the text flicks from this to this and back to this whilst you are reading it can be a bit disjointed at first, but when you get used to it you find it easy to follow as the bold is a "Rule" you can come back to so you always know what it means. Another example though of an index being helpful to find the rule in question as on occasion it mentions rules in the text without explaining them to a few pages later. With an index you could quickly flick to it and check before going back to the book.

Would I recommend the game? YES... I most certainly would, for anyone who loves skirmish games, the English Civil War, Witch hunters, Monsters, 17th century history, or just fantastic gaming. It is a great excuse to play toys, and learn! Study your local history and incorporate it into your games, name your characters and follow their exploits, write of their adventures! It is a true Garage Gamers' game. (Morgan- I want to play this game so bad now!)

A few final words to say, a big thank you to Eric Barnes of Dashing Dice Games for the help, and letting us use the pictures from his website which are also his own lovely minis! So do go there and look around, there is a forum and its very friendly I am on there myself as Marticus, and Eric the writer regularly answers questions on there.  It is a friendly community and I was warmly welcomed.


Keep an eye out for  other Witchfinder General articles coming, on inspiration, models you can use (we have had friend of the blog Heph digging though his epic collection) and homebrew ideas!

Take care on this dark night, when you hear a howl outside your door stop and wonder... Is it the Labrador down the road? Or a Barguest lurking in the mists!