The Firespray 31 patrol craft is a great looking and iconic Star Wars ship.  In the tabletop game it comes with four pilots and a large selection of upgrade cards.

In this article I am taking a look at some of the various builds you can use, and the pilots abilities. 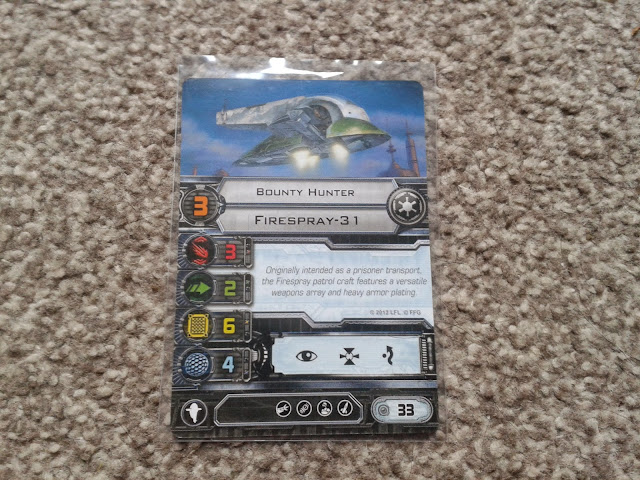 The Bounty Hunter is a pilot skill 3, not that high, but he is great value for the points.  He has no inbuilt pilot abilities but has access to the cannon, bomb, crew, and missile upgrade so you can add some real variety to him. 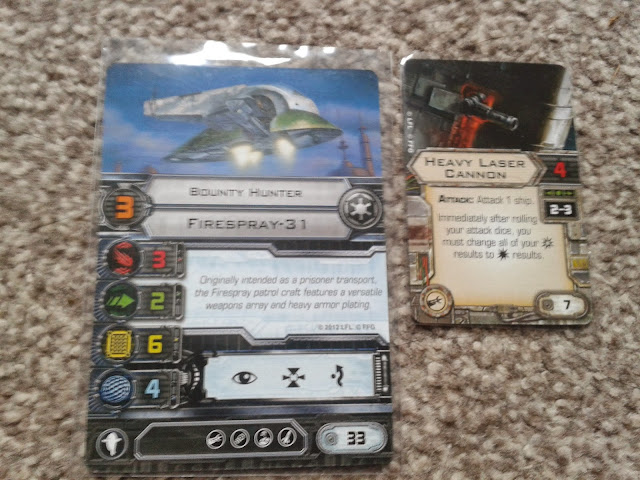 One of the upgrades I like for the Bounty hunter is the Heavy Laser cannon.  It only works in the front arc, but you can still pump 3 attacks from the rear arc anyway! It just adds some extra punch to him.

I think though my own favourite build for him, is just plain.  For what you get for the points cost its hard to beat.

Next up in pilot skill is Krassis Trelix, weighing in at Pilot Skill 5 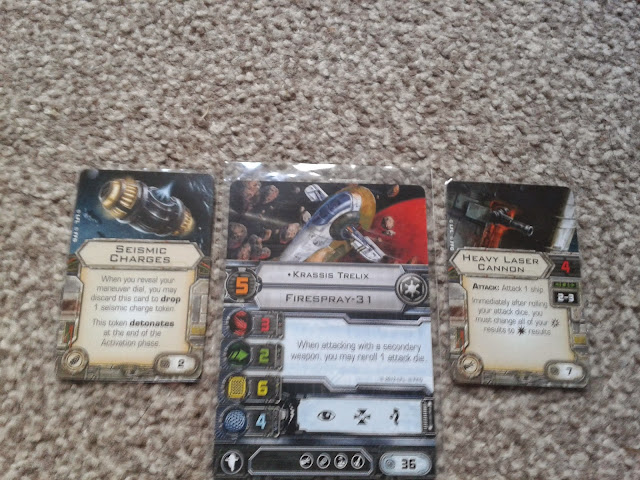 His ability allows you to re-roll one dice when you use a secondary weapon, so putting the Heavy laser cannon on him seems a great idea!  Here I have added on some Seismic Charges to add a nasty surprise if he is pursued.

The issue with Krassis is only that to get the best from his ability you need to take a secondary weapon pushing up the points.  He is still a solid choice though that I like a lot.

Next we have Kath Scarlet, she comes in at Pilot skill 7 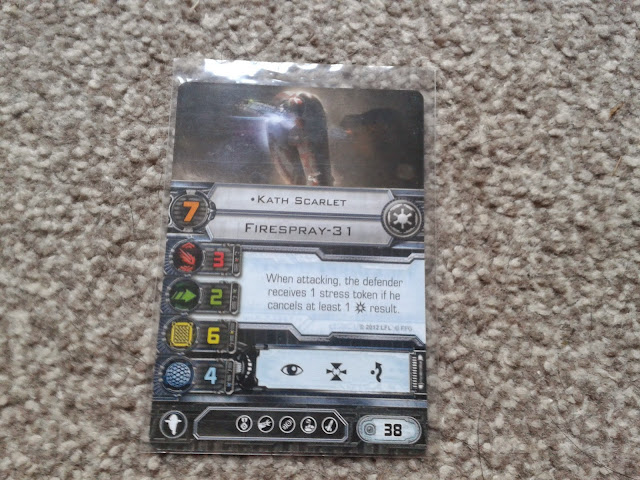 Kath's ability is each time you cancel a critical hit she causes in attack, her target suffers a stress. So she is great for putting stress on your targets and causing problems for their movement after making them more predictable. 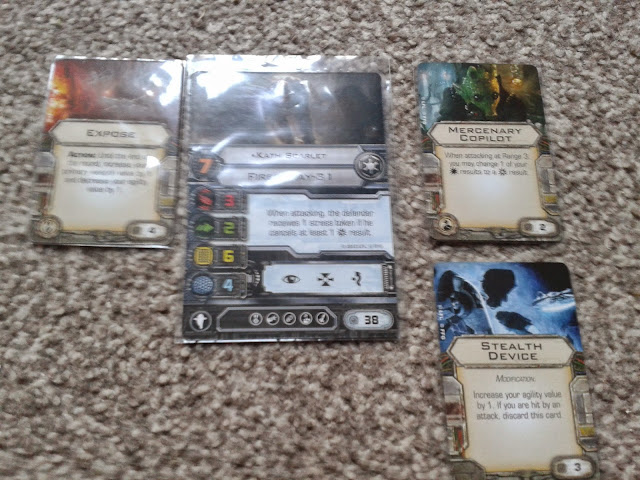 Kath gets a pilot skill increasing her usefulness, in this build I have added a mercenary co-pilot. Which when attacking from range 3 changes a hit into a critical, so If your opponent cancels it, they take a stress, if not they take a crit. It's a win-win situation! To add to the idea of sniping at range, I added the modification Stealth Device, which gives an extra defense die until you first take damage.  so at range 3 until your hit its 4 dice! which is pretty solid. Adding the Pilot Skill Expose adds more firepower at the expense of an evade die as an action, but at range with some good arc dodging it can really add some punch to her attacks. ﻿ 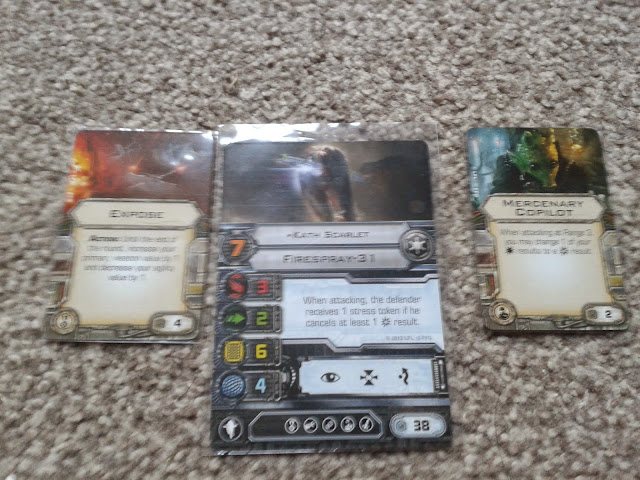 Above, a version of the build with out the stealth device.  A solid build not too pricey and has a job to do.

The last pilot is of  course the Fett man.  Boba comes in at pilot skill 8, the highest in this expansion pack 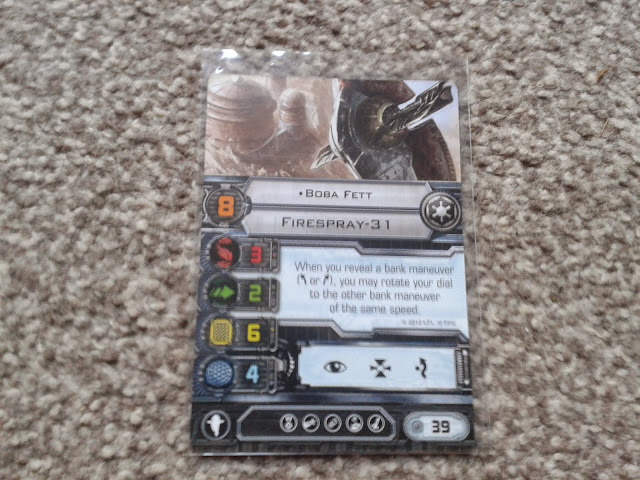 He is not cheap but is ability is very different (Mo-Damn!)!  When you reveal a bank maneuver on your dial either left or right, you may rotate your dial to the other bank of the same speed.  So basically you can switch your movement after you have seen how others have moved! At pilot skill 8 he is pretty high, but with an elite pilot talent he can take veteran instincts, which boosts his pilot skill to 10! Meaning you should move last but shoot first so you can change your banks to maximize this. 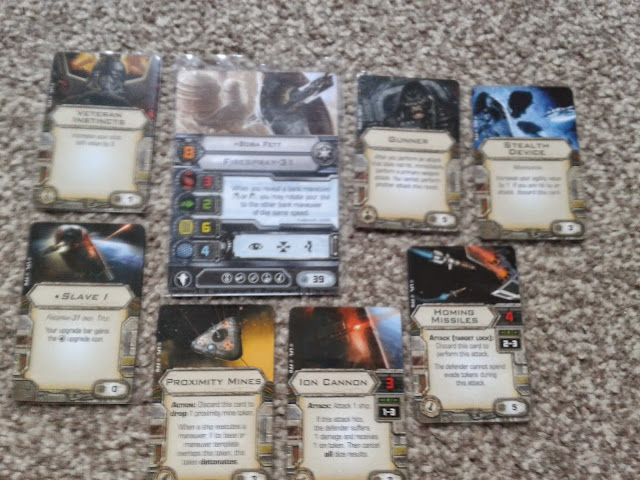 Here is a tooled to the max Boba! There are so many great options for him to use, here he has vet instincts to increase his pilot skill, a gunner, so he can re-roll if he misses, an Ion Cannon in case he wants to incapacitate, Homing Missiles for long range punch, a Stealth Device to add more defense, Proximity Mines he can drop to block movement and cause damage and havoc (very handy with being able to change direction)  and the Slave 1 title.  This allows the torpedo icon to be added so you can add Proton Torpedoes to add even more punch! it is a really versatile ship with huge firepower and excellent maneuverability. 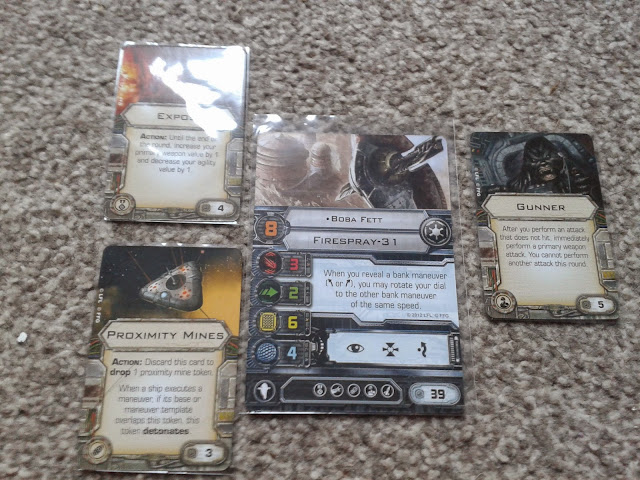 Here is a slightly less tooled up Boba, with expose to add more firepower, which works well with gunners re-roll, and the mines for area denial.

Overall the Firespray has some great pilots and a huge variety of builds available to it.  Have a look yourselves, see what you can do and share it with us!