The Scimitar is a best of a ship, and that can be seen in its cost.  For this build I will only be using the cards that come in the set.  The 50pt per ship rule will be used for one build, as the ship is very limiting due to its cost.  After the 50pt build then I cut loose. So lets look at the first build.

The named Scimitar of course, high attack good defence very high hull and good shields, its fast powerful, and can do a come about as well. A real predator of a ship.  The named ability allows you to reamin cloaked after attacking for the cost of an auxiliary power.  It is a pricey ship at 38 points though, so it limits what else can be added to the build.  For captain I have gone with shinzon, he is 6 points, but gives you a skill 9 putting you moving last and shooting first against most opponents.  The only other upgrade on the ship is Photon torpedoes.  THey are a plus 2 bonus to a Reman Warbird class ship so you have 7 damage torps, and the Scimitar has a rear arc, so this is a real threat from there.

So you don't get much for 50 pts, so lets see what happens when  the restrictions come off, still just cards from the pack, but lets see what you can make......

The Answer is a monster. An expensive one, but a monster none the less. 87 points of monster.

So we start again with the named ship, and Shinzon, and trick it out. Shinzon can take up to 4 talents for 4 points for the lot, hold them face down then flip them over when ever he wants to use one, though he has to discard the rest.  I would normally put another talent in as we only have two in this pack, but you can do that at your leisure and it will not cost anything more.  We Have full stop, in case we need to hang in space to shock our opponent or to counter his move, since shinzon will be moving last its easy to do.  Or we have target weapon systems to knock out some return fire.  Ther is also attack pattern shinzon theta in there, for when you get that devastating roll to add more firepower to the results. 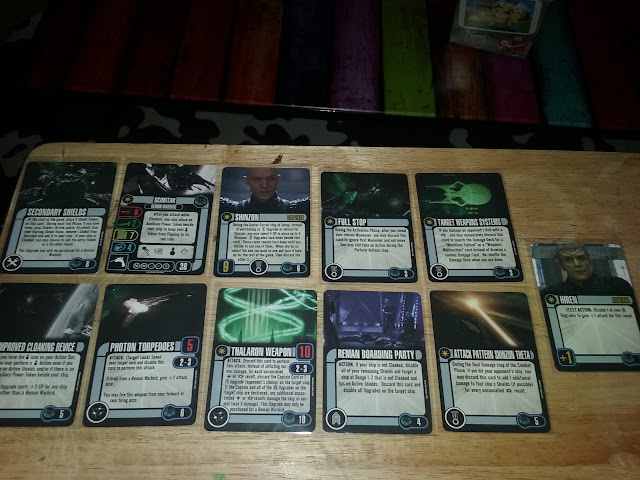 For tech we have the improved cloaking devise so we can still cloak with out any shields, handy on a ship with this high a hull value, and secondary shields, which basically provides 3 more shields when yours are damaged.  In the weapon slots we have photon torpedoes which are a plus 2 bonus for the ship as well, handy to cover your rear arc with a 7 attack weapon.  Of course the big thaelron weapon is on here as well, that thing is too fun to leave off with high potential damage and crew and captain killing abilities as well.

Our last card is admiral Hiren, who is mainly there to ump shinzon up to a 10 skill, so he can even go before Picard.  This is a monster ship in the line, or alone, it can happily go hunting anywhere on the battlefield and go toe to toe with any foe out there, it can one shot smaller ships and put fear into the biggest one. a true predator on the table.﻿ 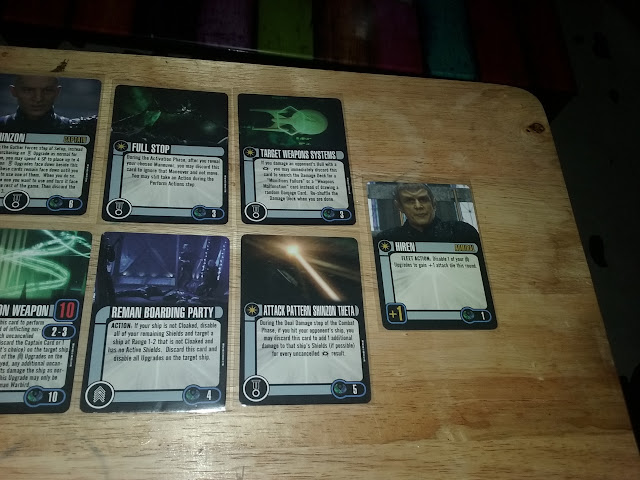