The Gorn raider is another one of those ships designed for fun and missions, so lets see what we can come up with.

I shall use the same rules as always, no more then 50pts, and only the cards used in the pack. 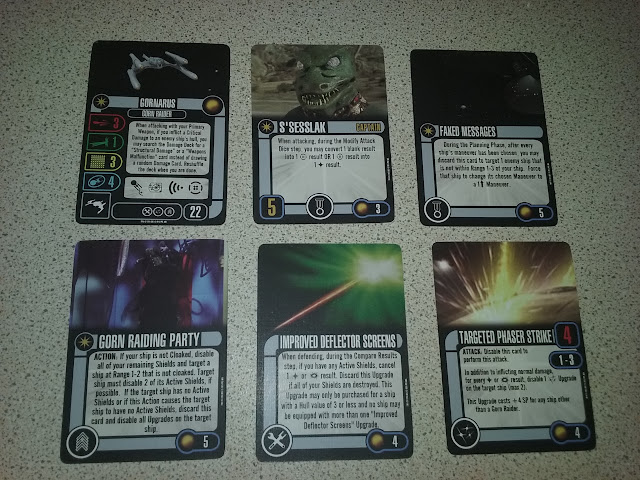 I have given him the faked message's elite talent, it only works on ships outside range 1-3 but allows to dictate their movement, set them up to dive in for a kill, or turn tem away from you.

In the crew slot we have Gorn Raiding Party.  For an action they drop two enemy shields, which is fairly useful in general.  If that causes the opponent to have 0 shields you then discard the card to disable all the upgrades on the enemy ship.  A very useful card for those dual purposes.

The Tech Slot is filled with improved Deflector screens.  As long as you have active shields you can cancel a hit or crit automatically, though when your shields are gone the card must be discarded.  Its good to reduce damage though, a really handy card.

Finally we have Targeted Phaser strike in the weapons slot.  This is a 4 attack weapon, so gives a bit more punch at range then the primary weapon systems, and for each uncalled hit you can disable an enemy weapon system.


It is a solid little ship, good in flanking, or holding back until the time is right to move in, Faked messages can help your other ships position themselves for the kill as well, as the Gornarus can stay out of range, do it whilst another of your ships is right next to the target, then dive in with the Gornarus as well to deliver a salvo.

A fun ship, with a good mission, that I am looking forward to trying out.