Trying to find the best way to kit out the lumbering old ARC is a challenge, but using only the cards that come in the pack, heres how i built mine for combat, so we can look at how, and why, and what roll she will perform for you in battle. 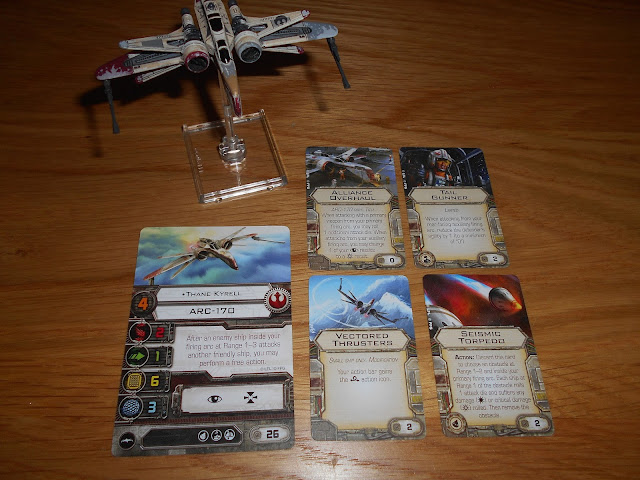 Theres quite a slew of upgrades, so lets take a closer look and see where she shines..... 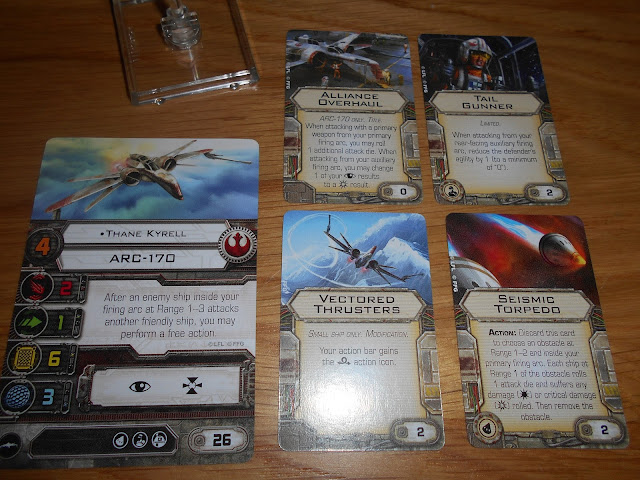 I went with Thane, at skill 4 he wont be setting the world alight, but... hes got a good ability that when an enemy inside our firing arc attacs we get a free action, so i want to fly in formation or near other firnedlys to get the free action, and i want a lower pilot skill to take advantage of that too.  There are only two actions available, focus, and target lock, so you can do one, and use the free action for the other to maximise damage, or the added vectored thrusters that give barrell roll!.  Now the ships got good hull, low firepower, low agiality and average shields, but the alliance overhaul lets you roll an additional dice firing from the primary arc bringing her up to a 3 attack ship, and when firing the rear guns i can change a focus to a crit!.  I added Tail gunner in that when attacking from the rear i can reduce the enemies agilty making it have quite the sting in the tail.  Siesmic torpedos let you dictate the battlefield terrain by fraggin and removing a piece of terrain, and causing damage to ships around it.  This can really dictate how you play, chase youe enemies into an asteroid field, blow it up! want to go through a gap and your opponent thinks your cornered? blow it up... plenty of uses here!

All in all shes a tough ship, but really needs a wingman to get the most out of her... pertner her with a Ywing who hs about the same speed and a turret and you are suddenly a slow but very hard hitting pair with great all round firepower to cover each other.