I love the Cthulhu mythos game Elder Sign, its an excellent game that plays well, and fast.  Being Fantasy Flight Games you knew there would be expansions to add more, and im happy with that as i love the game.  This one though does more than just adding new cards, it reinvents the way its played giving you a whole new version of the game to try, and still adding other cards for the regular game.

Witch-cursed, legend-haunted Arkham, whose huddled, sagging gambrel roofs and crumbling Georgian balustrades brood out the centuries beside the darkly muttering Miskatonic.
– H. P. Lovecraft , The Thing on the Doorstep 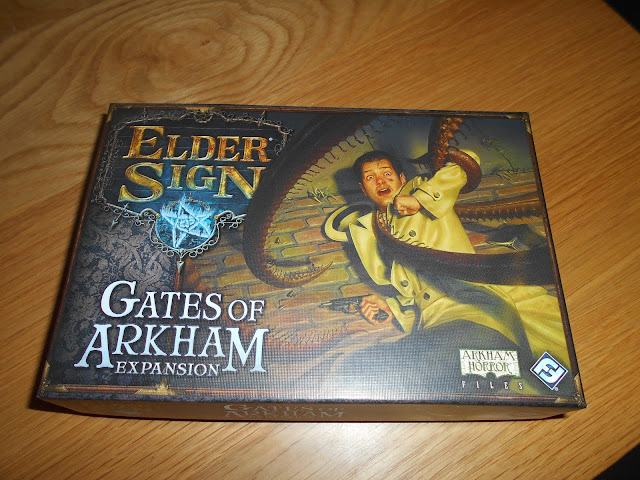 Gates of Arkham takes the struggle against the Ancient Ones out of the museum and into Arkham, where monsters lurk in darkened alleyways and bystanders become the victims of gang rivalries. In the featured  Streets of Arkham game mode, new Arkham Adventures and Mythos decks replace the original Adventure and Mythos decks, sending investigators on adventures throughout the city as four new Ancient Ones threaten to arise. Only by braving the city’s ubiquitous perils can you triumph against the ancient and awakening evil. 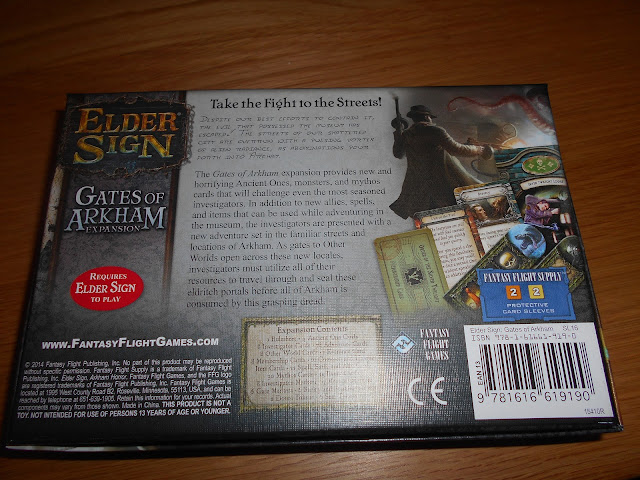 Lets pop it open, take a look inside, and see what new additions we get, and how it changes the game. 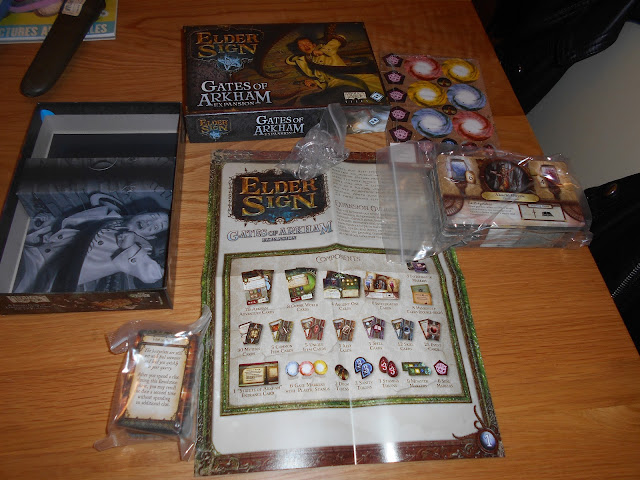 A City Full of Horrors
From its colonial-era founding, Arkham has been a refuge for witches and criminals, and legends suggest that since prehistoric times it has been home to some of the darkest forces imaginable. The turrets of Victorian homes, classical facades of Miskatonic University buildings, and tall booths of Velma’s Diner concealed inhuman horrors long before monsters came alive inside the museum. 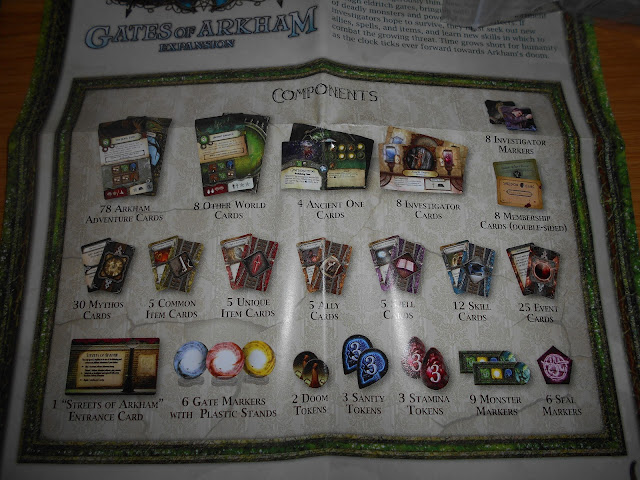 You do get a lot of new goodies  in the expansion, and there's a few things you will need to do before getting started.  Mix in the new common, unique, ally and spell card to your Elder Sign core game.  Then add in the new Ancient ones, and investigators to your pool.


The Arkham adventure cards aren't compatible with the original Elder Sign ones, but don't ditch them, keep them this just lets you play the game in a different way, where you step out of the Museum and are on the streets fighting the ancient evil in varied locations.  This new mode is called the Streets of Arkham 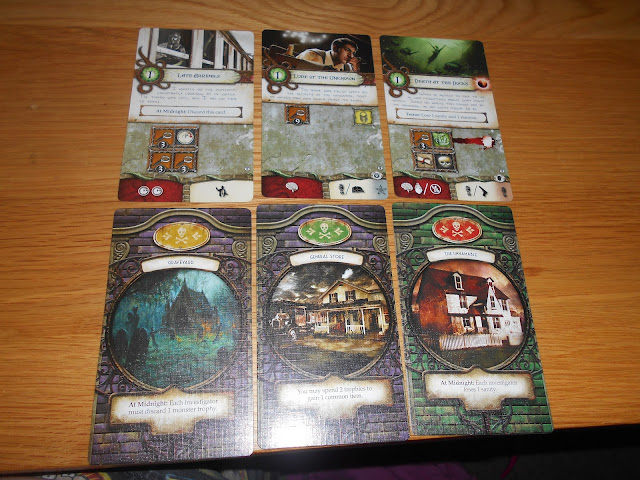 In the Streets of Arkham  mode, investigators choose which location in Arkham to visit without knowing what will happen to them inside. Arkham Adventure cards are played facedown, each featuring a specific location on the back. Some locations lure you towards them by offering rewards, such as the chance to regain sanity or gain a unique item. 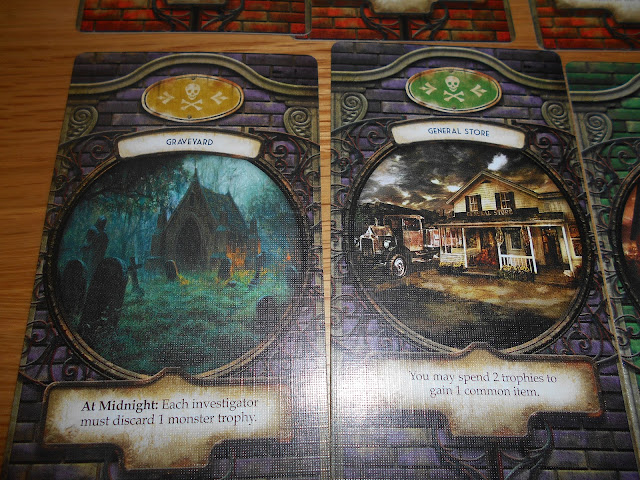 Others make terrible things happen at the stroke of midnight, for example, causing a ravenous Night Gaunt or giant Leng Spider to appear. 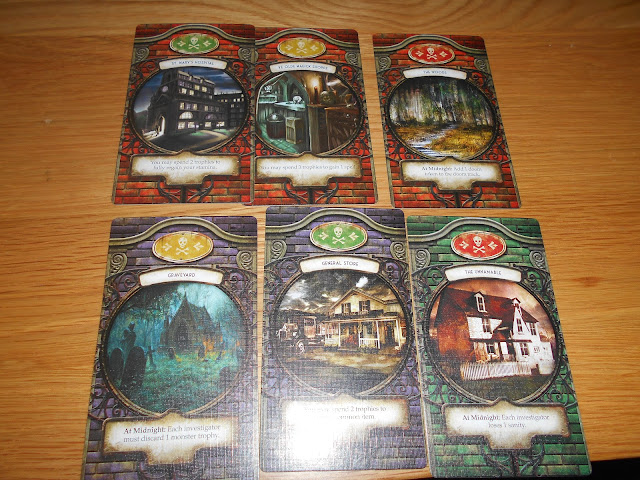 When an investigator arrives at a location, the card is flipped over to reveal the Adventure. At Hibb’s Roadhouse, you may participate in dark dealings with suspicious figures, or get caught in a police raid on the Sheldon gang. In the Curiositie Shoppe, you may discover a sealed ornate chest from another civilization, or you may arrive to find the door smashed open and a trail of blood leading inside. Once the adventure is revealed, there is no turning back. If you fail in your tasks, other investigators may come to your rescue, or you may find yourself running back out into the streets, drained of sanity and stamina. Success may reveal an elder sign or, at the very least, provide some clue, item, or skill to help you persevere.

You never know what the investigation will be exactly, but they are colour coded, green easy, yellow medium, red hard, and you always have three visible, and 3 unknown.  The varying museum entrance cards are removed and replaced by.... 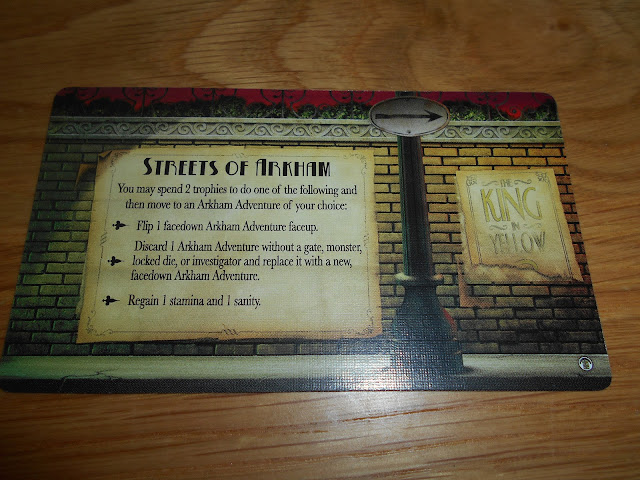 The choices are someh what limited on this compared, but it does up the difficulty, and the other cards often have good rewards on their back. 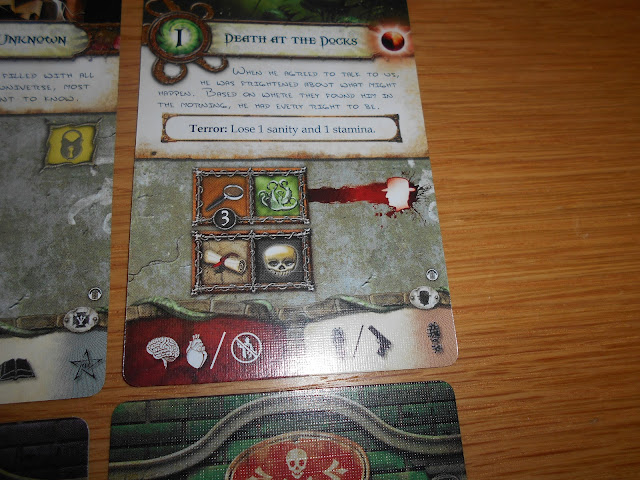 There are also society you can join... like the sheldon gang, or the Silver Twilight, and sometimes these make tasks easier, such as on the above card, you can ignore the first task if you are member of the sheldon gang, and you gain an extra reward.  You can also get cards that give you a choice of which bad things happen to you.... you may also note a burning red sphere in this one.. this is for a new deck of cards specifically for this adventure called event cards.... these can have a good, or bad outcome but you must draw them when you arrive at the location, so be be prepared for more theme in the game! 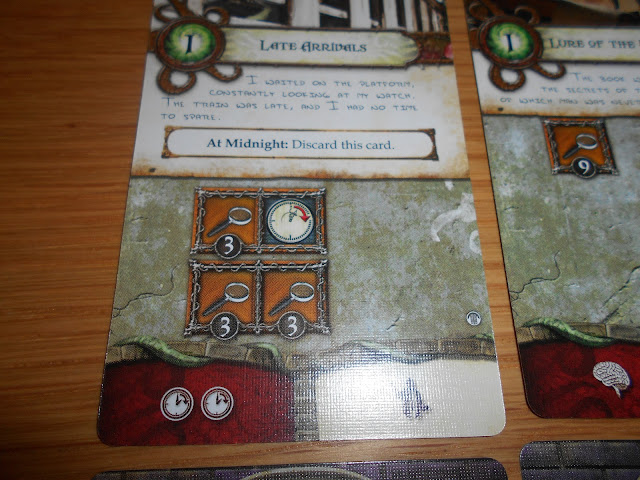 There is also a new mechanic, the moving the clock forward..... it could be a penalty for failing... or a requirement of the task, and this brings midnight closer, and the dreaded mythos card.... You use a new mythos deck for this expansion, and again most them have 2 choices of bad things (a very rare good one too) that could well happen to you.


Street Smarts and Occult Knowledge
As you navigate Arkham and survive its unpredictable Adventures, you’ll acquire lasting knowledge and enhanced abilities in the form of skills. For example, you may elicit some Occult Knowledge from a Miskatonic University professor. Unlike items, spells, and allies, skills may remain with an investigator as long as he lives, or be sacrificed in a moment of necessity to gain an even greater advantage.

Some locations and items give investigators membership in Arkham’s most influential organizations: the ruthless Sheldon gang, a bootlegging syndicate as infamous for their murders as their moonshine, and the Silver Twilight Lodge, an ancient and mysterious organization rumored to practice dark magic in the dead of night. Memberships sometimes allow you to bypass a task and sometimes offer extra rewards, such as an elder sign or an ally, for completing an Adventure.


Given Arkham’s perils, you may want to play one of the eight new investigators who are well versed in Arkham’s secrets or the bizarre physics of Other Worlds. As a cop, Tommy Muldoon knows Arkham’s criminal underworld as well as the Sheldon gang bosses. More interested in helping others than himself, Tommy can prevent another investigator from losing stamina by giving up his own– and gain some sanity in the process. Being a cop, however, doesn’t prevent Tommy from joining the Sheldon gang or the Silver Twilight Lodge. All secret organization have their police contacts. 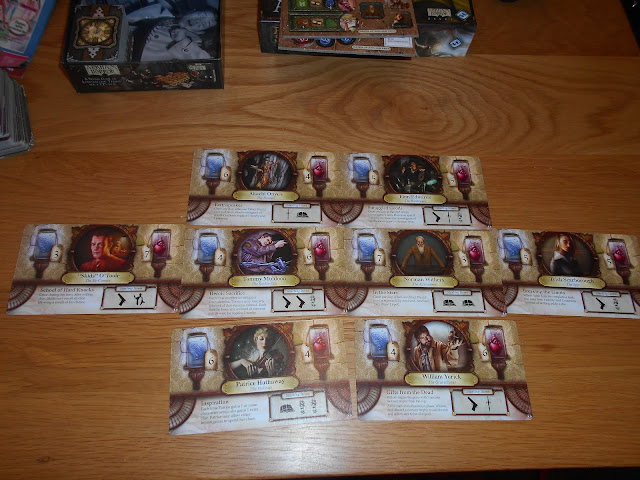 Gates of Arkham introduces four Ancient Ones who tear at the fabric of space and time as they begin to awaken. One of them is Atlach-Nacha , who is stirring in his transdimensional home and beginning to weave the worlds together, tugging at time and space, sapping the investigators’ sanity and stamina, and causing gates to Other Worlds to open across the city. Gates tie specific locations to Other Worlds, perhaps linking the Miskatonic Library to the Far Side of the Moon, or Velma’s Diner to the cavernous, underworld Vaults of Zin. You cannot visit a location that has a gate without slipping through to the Other World, and you must resolve the Other World adventure in order to seal the gate and return to Arkham. The more open gates in play, the more monsters spawn, and the faster doom approaches. 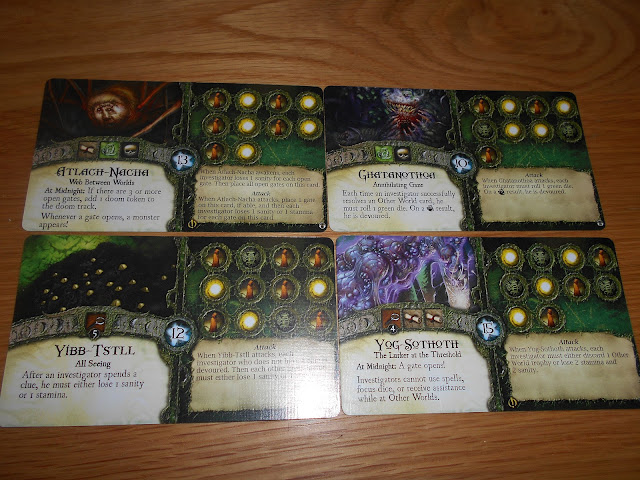 Not only do gates breach the physical environment, the awakening Ancient Ones wreck havoc in all aspects of life in Arkham. The social, psychological, and cosmic chaos is represented by Event cards, which many locations force you to draw before you undertaking any tasks. Events create unpredictable conditions that last the length of your Adventure, and may hinder or help you. Overwhelming Fear could cause you to flee from a location in terror, or a sympathetic stranger may come forward and offer you Unexpected Aid .

Can you Survive the Streets of Arkham?
You never know who or what you’ll encounter among Arkham’s crumbling buildings, desolate squares, and unlit roads. At any moment a tentacle could reach out for you. Around any corner may be the entrance to some Other World. As you scour the city for elder signs, you could become involved in criminal rivalries or clandestine rituals, arrested by the police or lost in the halls of an insane asylum. Only one thing is certain: the Ancient One is regaining strength, and it is up to you and your fellow investigators to save not just the museum, but Arkham and the entire world.


All in all, so many new bits and its almost like a re-inventing of the game, its well worth picking up, as you will love it if you are a fan of Elder Sign, or if you have not played it before, grab a copy of Elder Sign and dive into the world.
Labels: elder sign