Time to take a look at the digital version of the board game Splendor created by Space Cowboys.  Digital versions of games are increasing in popularity hugely, and are keeping true to their boardgame parents.  I love these digital versions, as they let me play my favorite games on the go, and are great learning tools as well on how to play the game, or play online against other players to keep your game fresh in your group.

Splendor is a game of chip-collecting and card development. Players are merchants of the Renaissance trying to buy gem mines, means of transportation, shops—all in order to acquire the most prestige points. If you're wealthy enough, you might even receive a visit from a noble at some point, which of course will further increase your prestige. 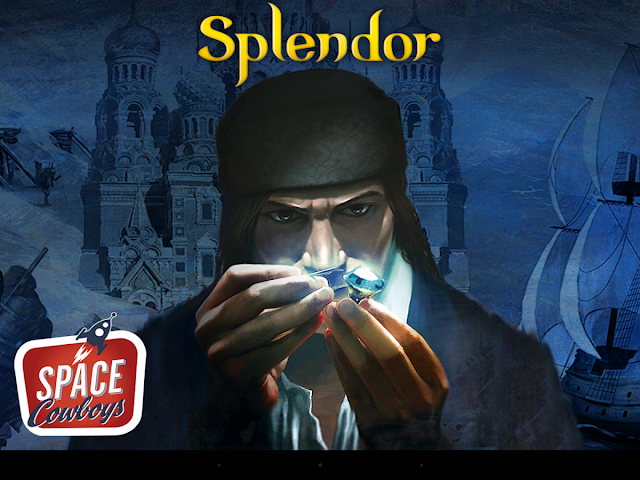 On your turn, you may (1) collect chips (gems), or (2) buy and build a card, or (3) reserve one card. If you collect chips, you take either three different kinds of chips or two chips of the same kind. If you buy a card, you pay its price in chips and add it to your playing area. To reserve a card—in order to make sure you get it, or, why not, your opponents don't get it—you place it in front of you face down for later building; this costs you a round, but you also get gold in the form of a joker chip, which you can use as any gem.
All of the cards you buy increase your wealth as they give you a permanent gem bonus for later buys; some of the cards also give you prestige points. In order to win the game, you must reach 15 prestige points before your opponents do. 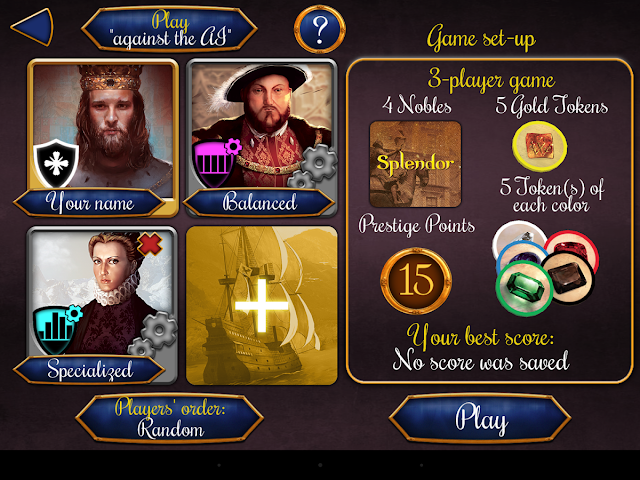 The game plays 2-4 players, and these games play fast, 15 minutes was the longest one i played which was particularly tense, otherwise with 2-4 players it varies on average 10 minutes for a game, so perfect for a quick play.  You can customize your character to a point with your name and pick an image.

there is no online play with this, but there is a pass-and play option so you can sit and play with your friends or family. 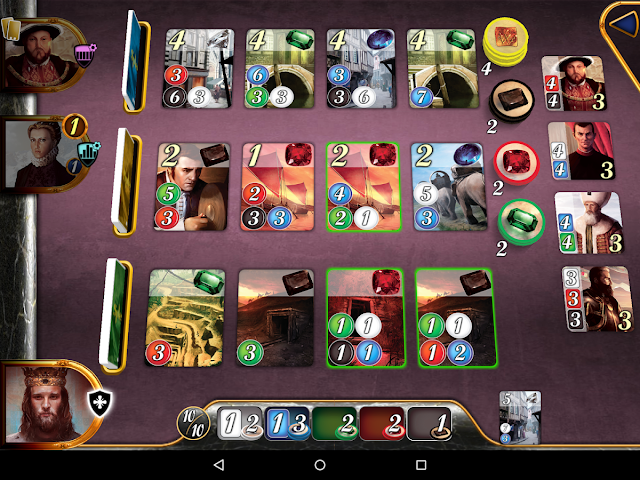 visually the game is beautiful, the graphics colorful and clear, and the cards are spot on reproductions of the table top variant.  there is ambient music, which is suitable to the period, and non intrusive, i left it playing it was quite soothing.  Above you can see a game in progress, the active player can pick up a number of gems to add to his overall base level, or go for a ruby in the second row that will also add 2 prestige points, and prestige wins games! first to 15 wins.  in the bottom row you see the number of chips of each gem we have, the left number in a square is our permanent bonus, and the round ones are the chips.

There are plenty of tactics to this game, do you go for the bottom row, which are cheaper will give you the permanent boost to your gems, but no prestige, and then when you have enough do you then go for the upper rows? or do you save chips to go for the middle rows? its down to you.  Concentrate on getting the gems you need to get the bonus from the nobles on the right? or ignore them and go for cards? again you choose! its a tough one sometimes.

There is no difficulty level to choose from, you instead pick the style of play of your opponent, from balanced to opportunistic with plenty of other choices.  I never felt i was hammered by the AI, but i also never felt i dominated them, so its well balanced in my opinion.


Splendor digital also introduces a special game mode, called Challenges. Challenges are like chess puzzles. They put the player in a preset situation and challenge him or her to achieve a specific goal. The goal could be a number of points to earn, or a special card or combination to collect. Some goals need to be accomplished in a limited number of turns or in a limited time. Some goals could be trying to stick to an ideal path.
Challenges are delivered in packs of 6. Each pack is labelled after a place on the globe: "Madrid", "Sahara", "Istanbul". With the 3 packs included in game, you have 18 challenges to master.

Overall what do i think? i loved it.. it plays fast looks good, has simple easy to learn rules taught by the tutorial and most importantly its fun to play.  some people think that the digital version surplants the boardgame one, but going from this i can say not the case, its made me want to grab the physical game to share with my friends.

The theme itself is not the strongest, though the art on the cards is beautiful and that is in theme, but you never fully feel like a gem merchant looking for mines and transport as shown b the art on the cards which does not effect gameplay.  I did feel like i was purchasing gems though to increase my power, so this game may not have you making stories up about the theme and background, it will get you talking about that time you swiped the 2vp diamond that activated the noble winning you the game.

Its a great family game too, with no text to read for younger gamer it becomes a colour matching collecting game so it can be enjoyed by all

I like collecting the gems, i like that i can play it together with dad, and don't have to read the cards, it does not take long to play either so i can play more games.  I want dad to put it on my phone now so i can have all the GEMS!!!


Splendor is available on IOS, Android and PC, so go find yourself a copy.
If you want to find the physical copy of it (I really do!) take a look here and find your local game store and grab a copy.
Labels: digital games Splendor