The USS Reliant (NCC-1864) was a 23rd century Federation Miranda-class starship operated by Starfleet. In 2285, the Reliant was commanded by Captain Clark Terrell. While under his command, the ship's prefix code was 16309 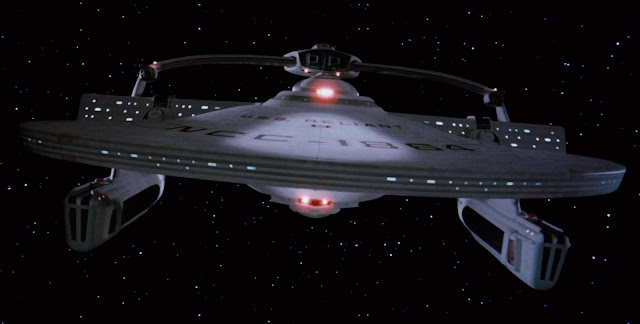 On Stardate 8130, the Reliant approached the planet Ceti Alpha VI. During the scan of the planet, one of the Reliant's dynoscanners detected a "minor energy flux" on the surface on what seemed to otherwise be a prime location for the experiment. Hurried by the growing impatience their unsuccessful mission bore upon them, Captain Terrell and his first officer Pavel Chekov transported to the surface to investigate the energy flux, hoping that it was something they could "transplant" in advance of testing.
The landing party, however, instead discovered a group of exiles, led by Khan Noonien Singh. Khan and his followers quickly captured the two Starfleet officers and informed them that the planet Reliant was orbiting was not Ceti Alpha VI but actually Ceti Alpha V. Khan then took control of Terrell and Chekov through the use of Ceti eels and successfully commandeered the Reliant, marooning her crew on the planet's surface. Having learned of the Genesis Device, Khan pursued acquiring the secrets of the device that the Reliant was contracted to work for and took the Reliant to the Regula I space station.
Unable to get what he desired from the station crew, Khan used the Reliant to intercept Admiral Kirk and the USS Enterprise. In an ambush, the Reliant caused severe damage to the engineering section of the Enterprise, but Khan was unable to revel in his victory because the Reliant itself fell victim to a counter-ambush from the Enterprise after its crew managed to partially disable its defenses by accessing them through the Reliant's prefix code.
This attack caused moderate damage to the Reliant, including the loss of photon torpedo controls and the warp drive. Despite the damage the Reliant escaped, and returned to Regula where it hid behind the planetoid from Enterprise. Khan took up the pursuit shortly afterwards when hailed and taunted by Kirk into the Mutara Nebula.  An epic encounter in the film that is provided for in mission form here.
So what else is in the pack?

As always plenty of tokens, and then the cards..... 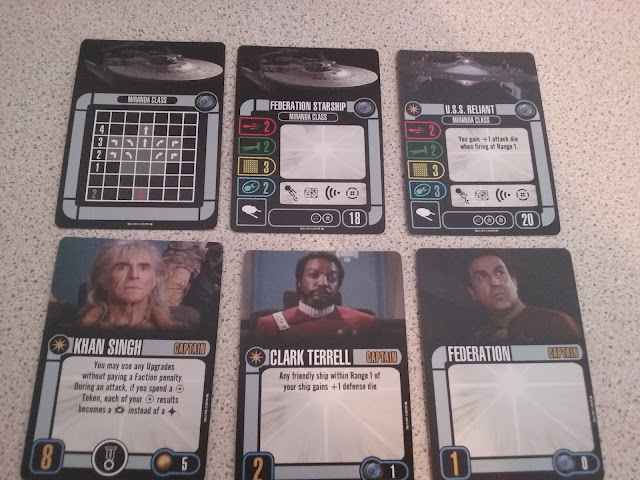 The Miranda class ship has a great set of manoeuvres.  She may not be the toughest ship or have the most firepower, but she is cheap.  The named Reliant has a passive ability for an extra plus 1 at range 1, so she can present a nasty surprise at range 1 rolling 4 dice.  For captains we have the generic Federation captain.  Clark Terrell is a 2 skill 1 point captain.  his passive ability allows all friendly ships at range1 to get an extra defence dice.  Of course the Reliant would nto becompelte with out the independent faction captain Khan Singh.  He is a skill 8 captain, and you can use any upgrades without a faction penalty.  He also allows you to convert battlestattions to crits instead of hits, which can be brutal! 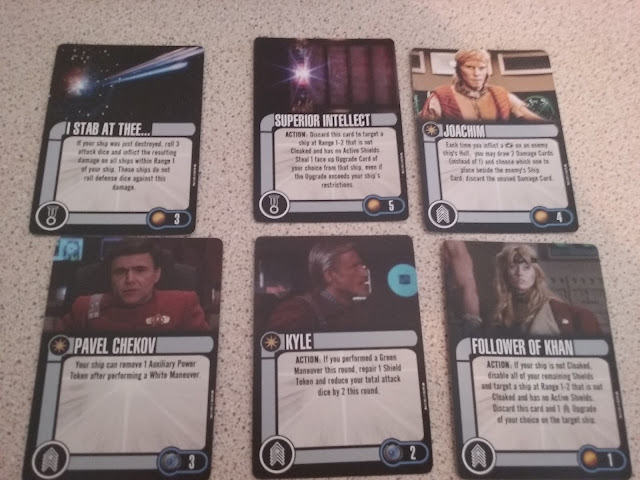 We get two independent elite talents, I stab at Thee, which allows you to roll a 3 dice attack when you are destroyed.  Superior Intelect allows you to steal an upgrade card from an enemy ship.  We get two Federation crew, Chekov lets you count white manoeuvres as green for removing power tokens.  Kyle lets you use an action if you have made a green move to repair one shield at the cost of reduced firepower.  Joachim is an independent crewman, each time you get a critical hit (works well with Khans ability) you can draw 2 damage cards and choose which one to use.  The other crewman is independent as well, the Follower of Khan.  As an action you discard them to remove an enemy crewman. 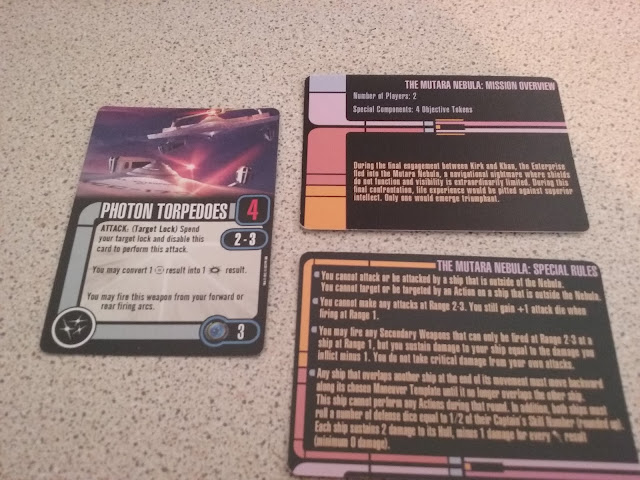 The last cards in the pack are Photon Torpedoes, and the mission Mutara Nebula.  A great moment in the film Wrath of Khan, and im looking forward to recreating it. 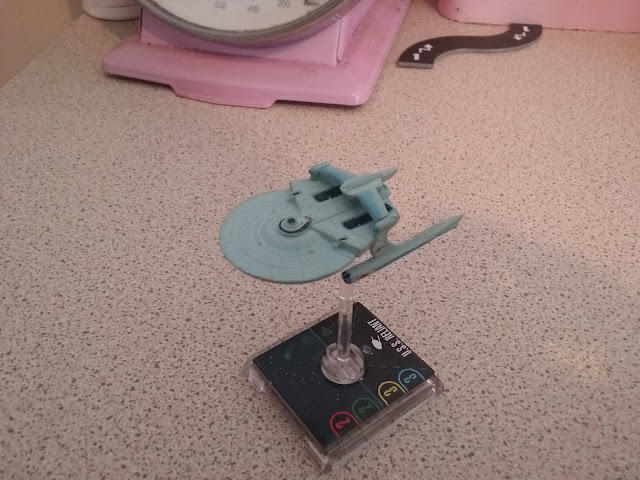 Its a great looking ship, full of detail. 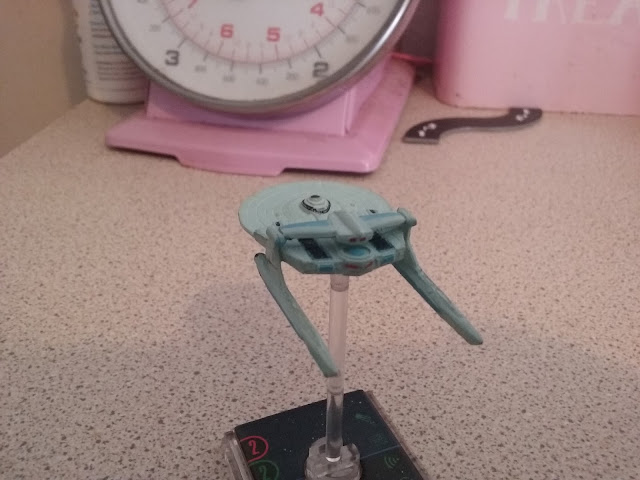 As always a wash would finish it off nicely 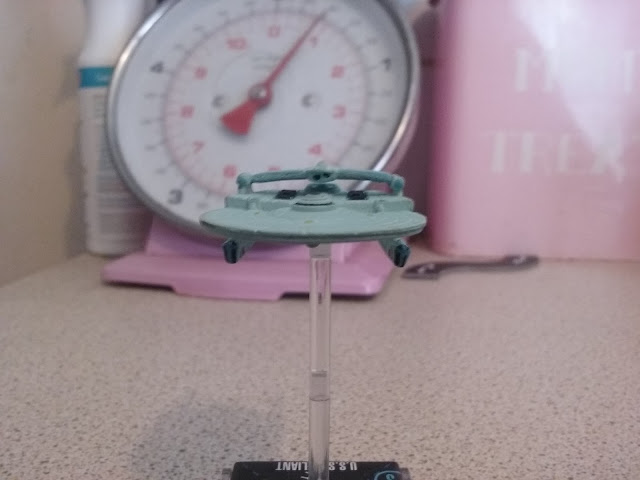 A great model with some fun and characterful cards from one of the best Trek movies. A must have pack.
Labels: Attack Wing Star Trek unboxing