A video game review? yes.... that's right.  There are some I enjoy apart from tabletop gaming, so I thought I would also share them with you. 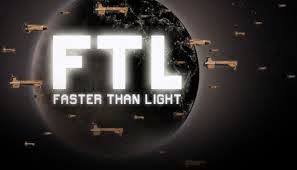 The player controls a faster-than-light (FTL) travel capable spacecraft belonging to the Galactic Federation, which is on the verge of collapse after losing a war with human-supremacist rebel forces. The player's crew intercepts a data packet from the rebel fleet containing information that could throw the rebels into disarray and ensure a Federation victory. The goal is to reach Federation headquarters, waiting several space sectors away, while avoiding destruction or capture by the pursuing rebels.
Would you like to know more?

At game start, the player chooses a spacecraft with several specific systems rooms (piloting, engines, weapons, life support, etc.), and a crew. The game randomly generates eight space sectors à la roguelike games, with twenty-some interesting way-points per sector. The player must "jump" the ship between way-points, normally unaware what awaits at each point, making headway to an "exit" point leading to the next sector until the Federation is reached. Players can revisit way-points, but each warp jump consumes fuel and causes the rebel fleet to occupy more of the space in each sector. Encounters are more dangerous deeper within the rebel sphere of influence.

Way-points may include stores that offer ship systems, fuel, ammunition, crew recruits, and hull repairs for a certain amount of scrap (in-game currency). Other way-points may appear as distress calls from stranded ships or traps set by rebels and other hostile groups. Certain destinations are hazardous to the ship or ship functions: asteroid belts continually pelt ships, nebulae disable sensors, and flares from red giant stars cause fires. Hostile ships often attack the player, and must either be destroyed or fought until they offer surrender, or evaded by "jumping" away. During attacks the game becomes a real-time space combat simulator in which the player can pause the game for situation evaluation and command input. 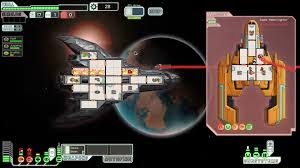 In combat, the player can manage the ship's systems by distributing power, order crew to specific stations or rooms to repair damage, and fire weapons at the enemy ship. Successful weapon strikes by either side can damage systems, disabling their functions until repaired by crew; cause hull breaches that vent air into space until patched by crew; ignite fires that spread and damage both systems and the hull until they are extinguished by crew or starved of oxygen; and inflict direct hull damage, which reduces the ship's hull points (the player can restore hull points via stores, friendly bases, random events, and hull repair drones). A ship is destroyed once its hull points are reduced to zero, or defeated once its crew is eliminated. A player victory earns resources for bartering, upgrading, or combat; an enemy victory results in game failure, deleting the save file and forcing the player to start over creating a high level of difficulty. Alternatively, the player may evade combat by jumping to another way-point after the ship's engines have charged.

The game begins with a single accessible ship, the Kestrel-class cruiser. Eight further ships are unlocked by completing objectives. All ships except for two have a second and a third layout—different color schemes, equipment, and crew—that can be unlocked by completing base-layout objectives. Each ship design and layout begin focused on different game play aspects; the ship roster has designs for stealth, boarding, drone systems, and other variations. The game also has separate achievements with no gameplay impact. The game can be modified by the user to alter the various ship configurations.

Its a great little game, simple 8bit style graphics.  Do not let the graphics put you out, this is all about the game experience, and with its stunning music it draws you in, just one more jump, one more sector, one more battle, one more try.  Its very addictive, randomly generated and full of choices 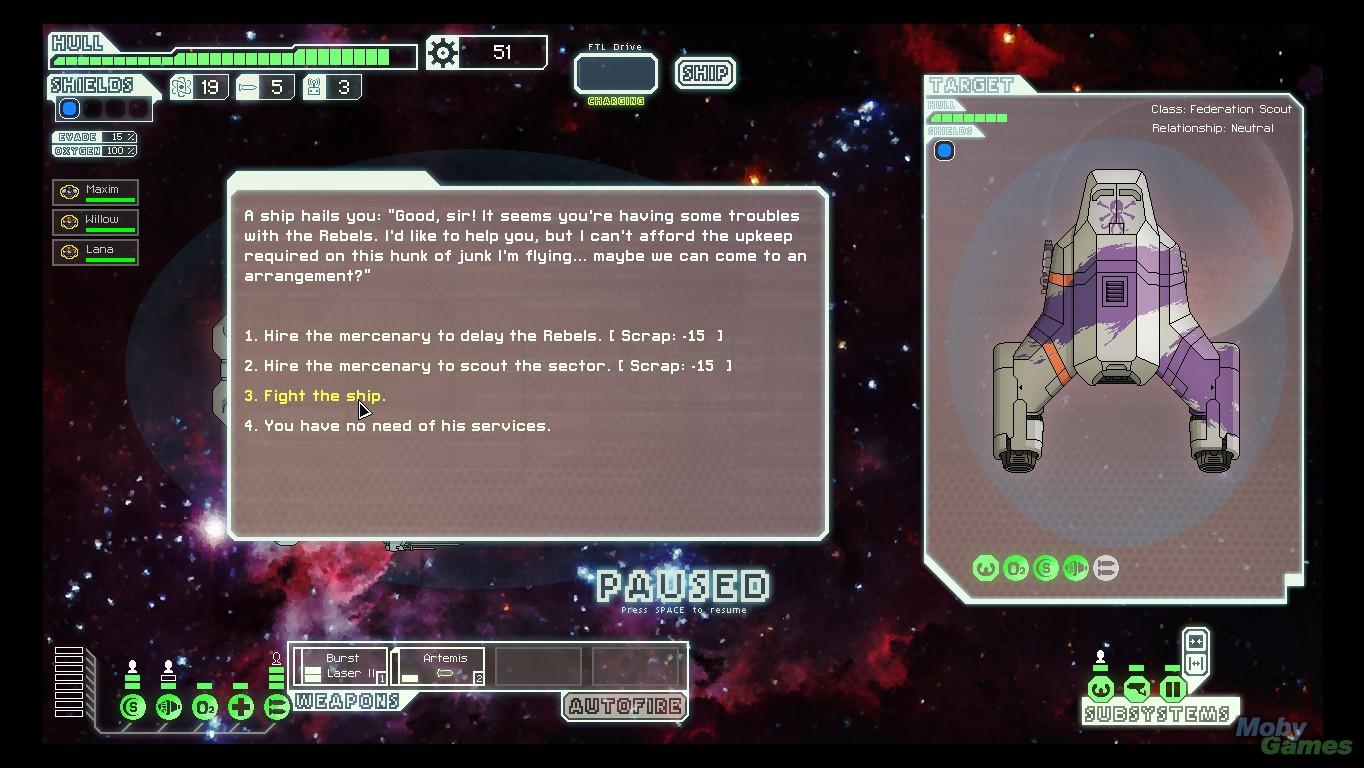 You begin to care about your ship and crew, managing them watching them increase in skill on their stations, watching them run around your ship at command to put out fires, repel boarders, fix the ship.

Once you have beaten it, you can go back and try it again with another ship, or the same one as its all randomly generated in the world again so no two journeys are the same.

Overall a great game and well worth your time to pick up.
Labels: review video game