Today we have a battle report for you all to (hopefully) enjoy.  We watched the Wrath of Khan, and then decided to break out the mission from the USS Reliant.  The Mutara Nebula is the iconic battle in the film so we tooled up.  40 points is the limit per ship.  Olivia took the "goodies" the USS Enterprise with captain Spock (he gives a free target lock action) and Admiral Kirk as well you need Kirk, its not wrath of Khan without him.  To round out the ship she has scotty to deal with aux power, and fix the hull when needed. 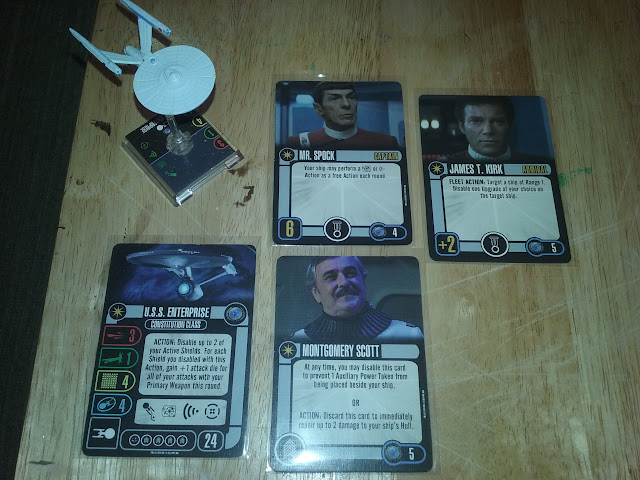 I was in command with the USS Reliant, with Captain Khan and his talent I stab at thee (just in case I died I could get vengeance) Joachim to use his ability of drawing two crits and picking the best one, and a follower of Khan in case needed to mess up the Enterprise Crew. 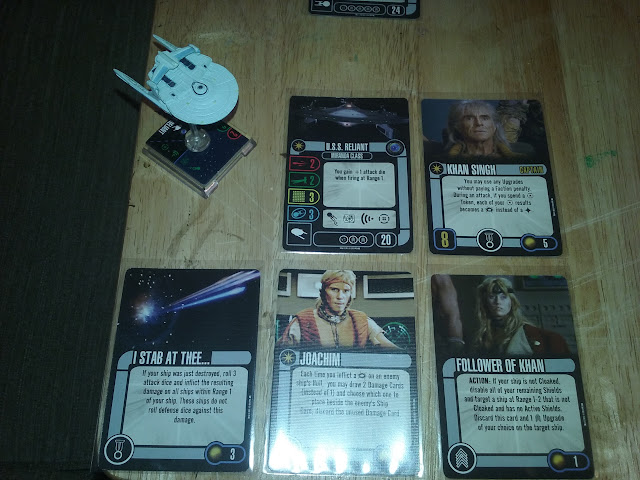 Here is the mission, plenty of little rules and changes  from normal.  All comat takes place at range one, so this will be a knife fight. 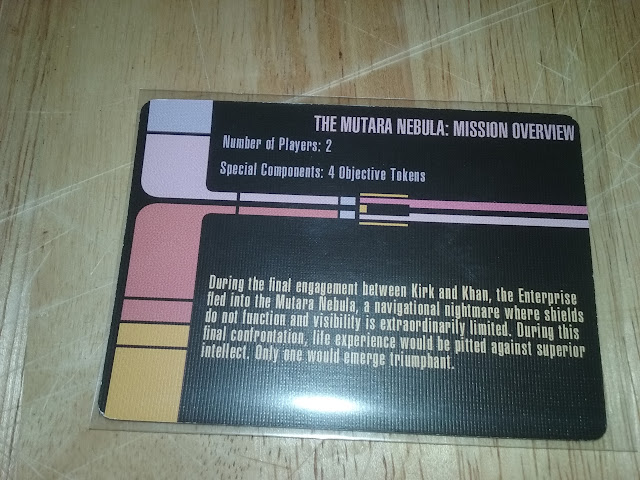 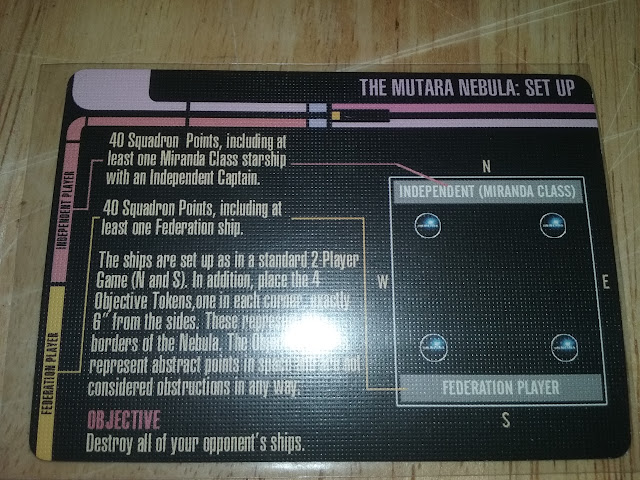 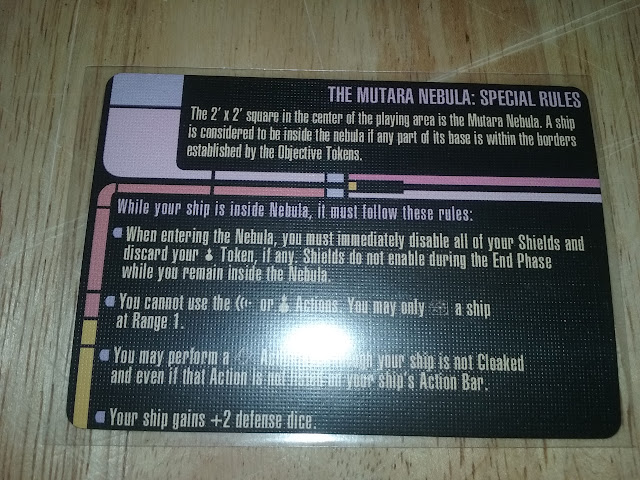 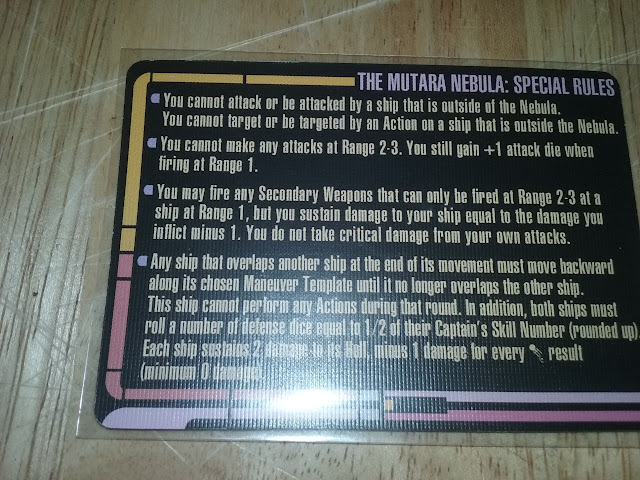 We decided to use the table as the nebula board is smaller.  We set the ships up, and prepared for battle. 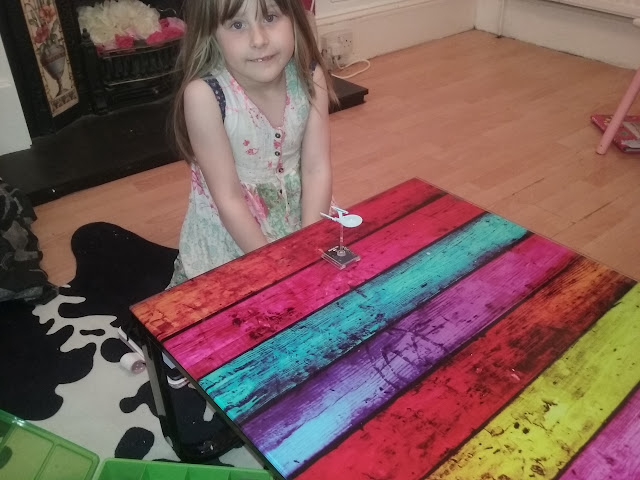 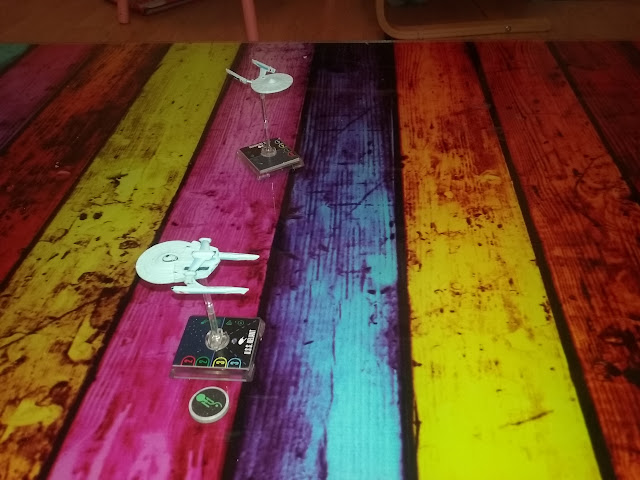 The view screen fizzled on the Enterprise, dam this nebula, visibility was short.  "shes out there somewhere sir" first officer Olivia said.  Kirk just nodded, bring her forward, we will find her! 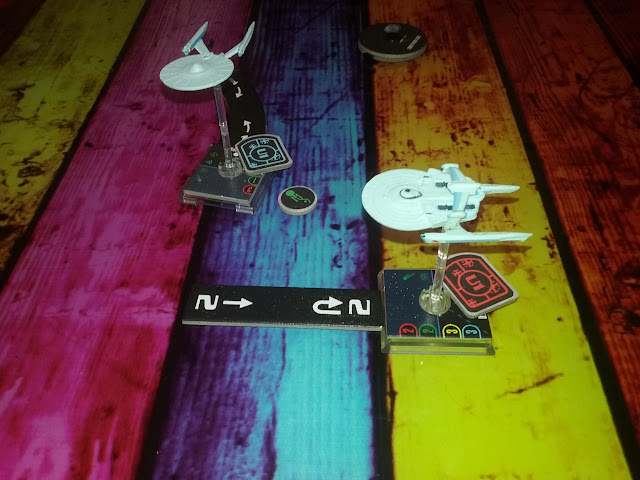 "There she is!" Olivia called. Admiral Kirk spun around, Mr Spock lock phasers on target. and prepare evasive manoeuvres.  Spock can do a target lock as a free action and the normal action for the ship was an evade.
On the Reliants Bridge Khans aide Martin checked the scanners, "shes closing to starboard sir!".  "he has come for us" Khan whispered, full reverse set us up to blow him out of the sky" Reversing was a red manoeuvre providing an auxiliary so Khan could not take an action.

Fire Phasers! The enterprise unleashed a torrent keep on target commander kirk calmly ordered Olivia. Olivia spent her target lock to re-roll her 2 blanks but ended up with only 2 hits and two battle stations. 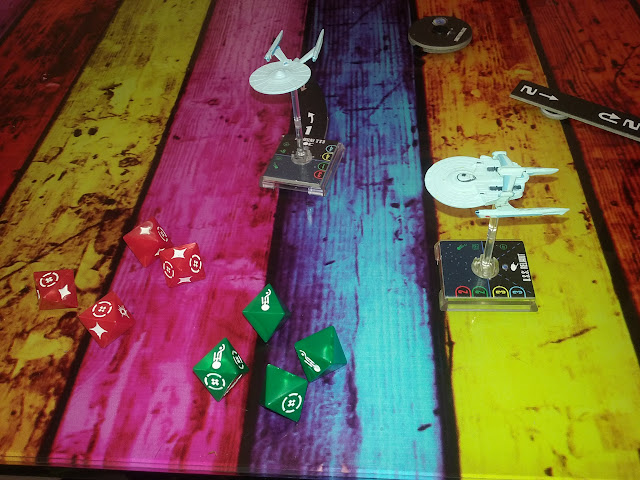 Khan growled, he tasks me.... return fire martin.  Phaser fire lanced out of the Reliant into the Enterprise 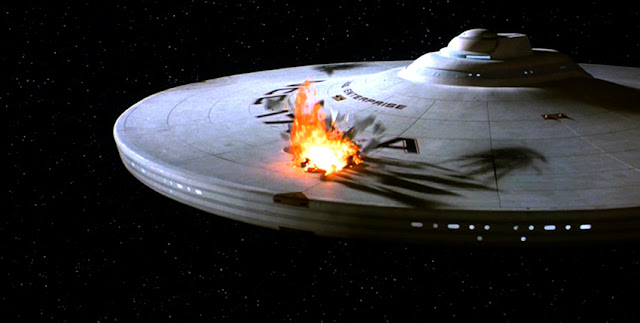 The Enterprise only evaded one hit, but had two crits and a hit go through. She spent her Evade token though to remove one more, so it was just the two crits.  Joachim then let me draw two cards for each critical and pick which one to place on the ship so she ended up with two critical hits. 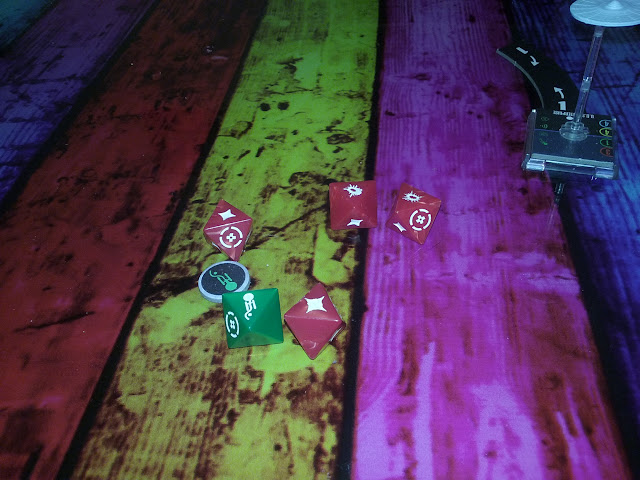 The bridge of the Enterprise shook and sparked as the consoles began to explode, a direct hit on a power coupling, crew man where down on the bridge and a fire was burning on the science console.  "Damage report!" Olivia called into the intercom....  a gruff Scottish voice came back to her.. "commander we cannae take another one like that, im trying to hold her together here".  Olivia swivelled to her Captain.  Sir we are badly hurt, and losing power, I have activated damage control parties, but its bad" 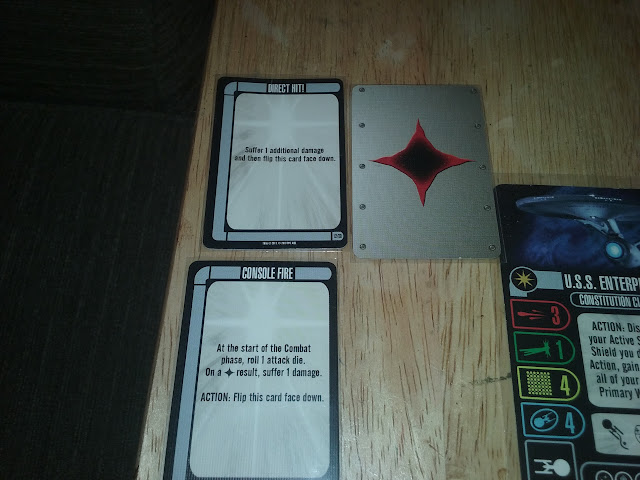 Back her up number one Mr Spock said calmly.  "Mr Scott" kirk called into the intercom, "give me all the power you can".  Commander Olivia began to back the wounded ship away from the Reliant.
For the manoeuvre the enterprise reversed which is a red manoeuvre but used scottys ability to disable him to remove the power allowing the ship to still take actions﻿
﻿ 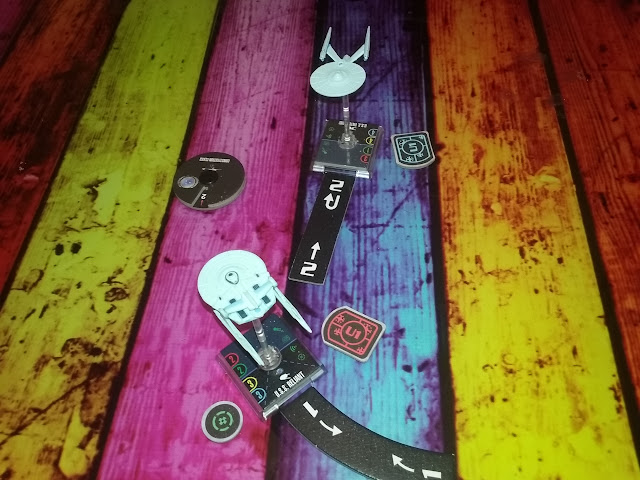 As the ship backed up it used spocks free target lock, and then the regular action to remove the disable from scotty 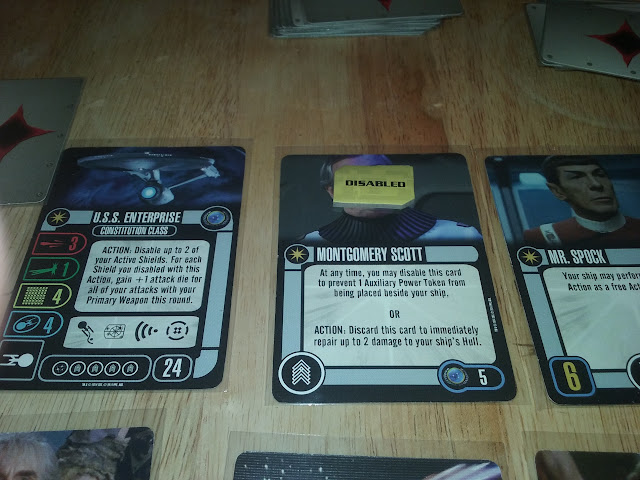 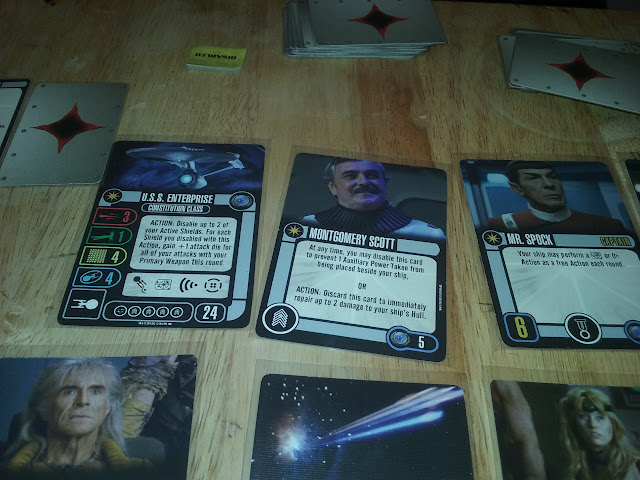 Next turn as the ships jostled Olivia used her action to discard scotty to repair 2 points of hull. 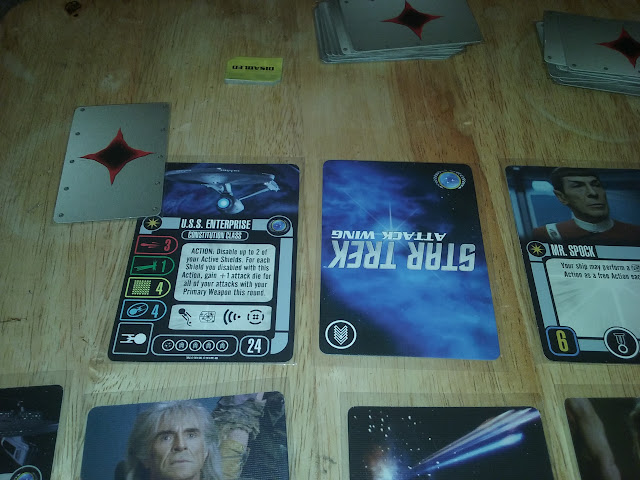 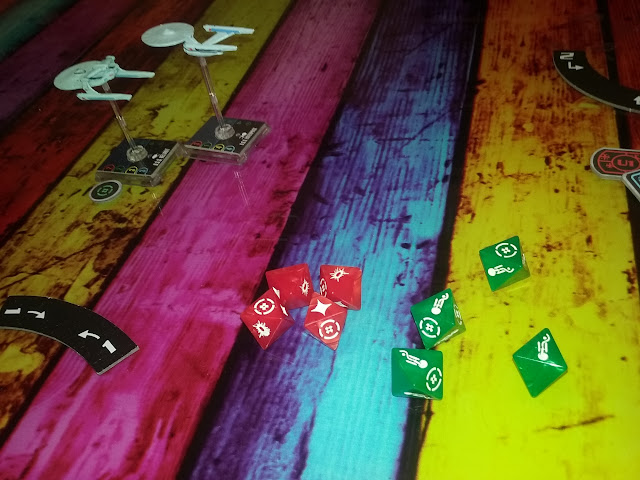 Again the Enterprise on Reliants tail failed to her her quarry 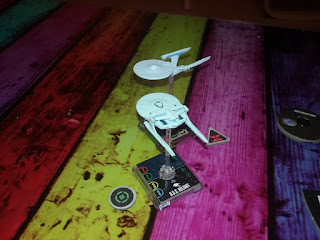 after more manoeuvres the Enterprise found herself nose to nose with the Reliant.  she is in our arc, sir permission to fire? Olivia asked.  She had taken over at tactical since the last officer had to be sent to the medical bay.  Permission give you may fire at will Captain Spock responded. 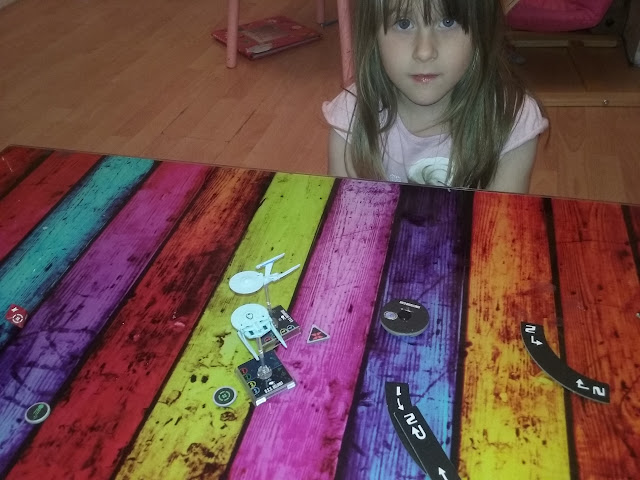 Olivia fired the phasers, she was not going to miss.  "We have hit her sir! shes in bad shape, her hull integrity's down to 30% one more good hit and she will be finished!"  Olivia scored 2 hits on the Reliant, and since the Relaint only has 3 hull she is nearly gone

Flames sparked from the wall consoles as the Reliant shook, "We cant take another hit like that sir" martin called over to Khan.﻿ 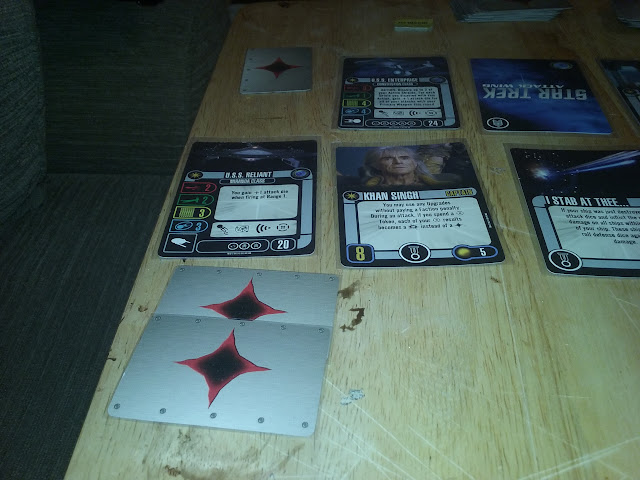 The Reliant only has one hull point left, the enterprise has 3 left, its not looking good for the Reliant.
Khan swivelled in his chair to his aide, Revenge is a dish best served cold, and space is so very cold"  he clenched his fist.... Martin fire all we have, do not fail me!".  Martin checked the targeting sensors, and pressed the fire button, Phaser fire erupted into the enterprise.  She began to list in space  "We have her!!!" Kahn yelled triumphantly and slammed his fist down... "I have beaten him! KIRK!!! I have beaten you!"  The Reliant got four hits, and the Enterprise did not roll any evades, enough to destroy it.

The Enterprise rocked, the bridge was full of smoke and flame, alarms blazing.  Captain spock turned slowly. we must abandon ship, the Hull is buckling, the warp core is about to go critical.  Olivia opened a ship wide channel " all hands abandon ship all hands abandon ship, get to the escape pods"  "Captain, Admiral, we must go, the ship is dying" she went to help a crewman slumped at his station. 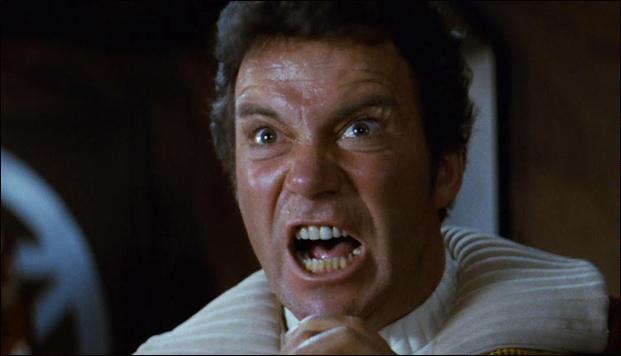 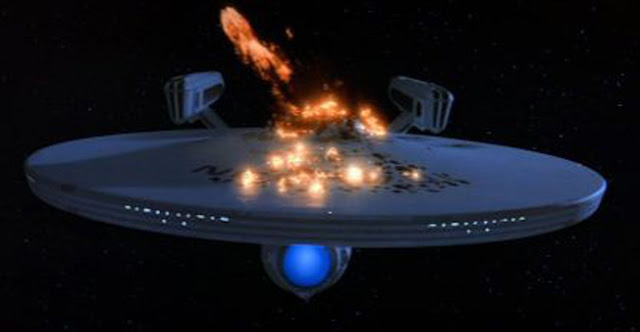 Jumping into an escape pod Commander Olivia was shot out into the void, and from the window of the pod she watched the Enterprise die.

It was a tough battle, only firing at range one made this into a real knife fight, and it was a brutal game, if Olivia had rolled better she could have blown the Reliant out of the sky, but some poor rolling, and some great shooting from the Reliant sealed the game.  It was very different from a normal game having the restrictions on scan having no effect, and no combat at longer ranges.

All in all a really funny fast brutal little scenario, lots of jostling for position and tight turns.  I cant recommend enough giving these scenarios a try at home yourself.

I hope you enjoyed our first little narrative trip into Star Trek, it will improve over time so stick with us if you want more.
Labels: AAR Attack Wing Star Trek