One of the most important starships in interstellar history, Enterprise (NX-01) was the culmination of the NX Project. The NX-01 was the first NX-class starship, launched by the United Earth Starfleet in 2151. Enterprise established United Earth as a legitimate interstellar power and caused a wholesale revolution in Alpha and Beta Quadrant politics, paving the way for the creation of the Coalition of Planets in 2155, and eventually the United Federation of Planets in 2161. 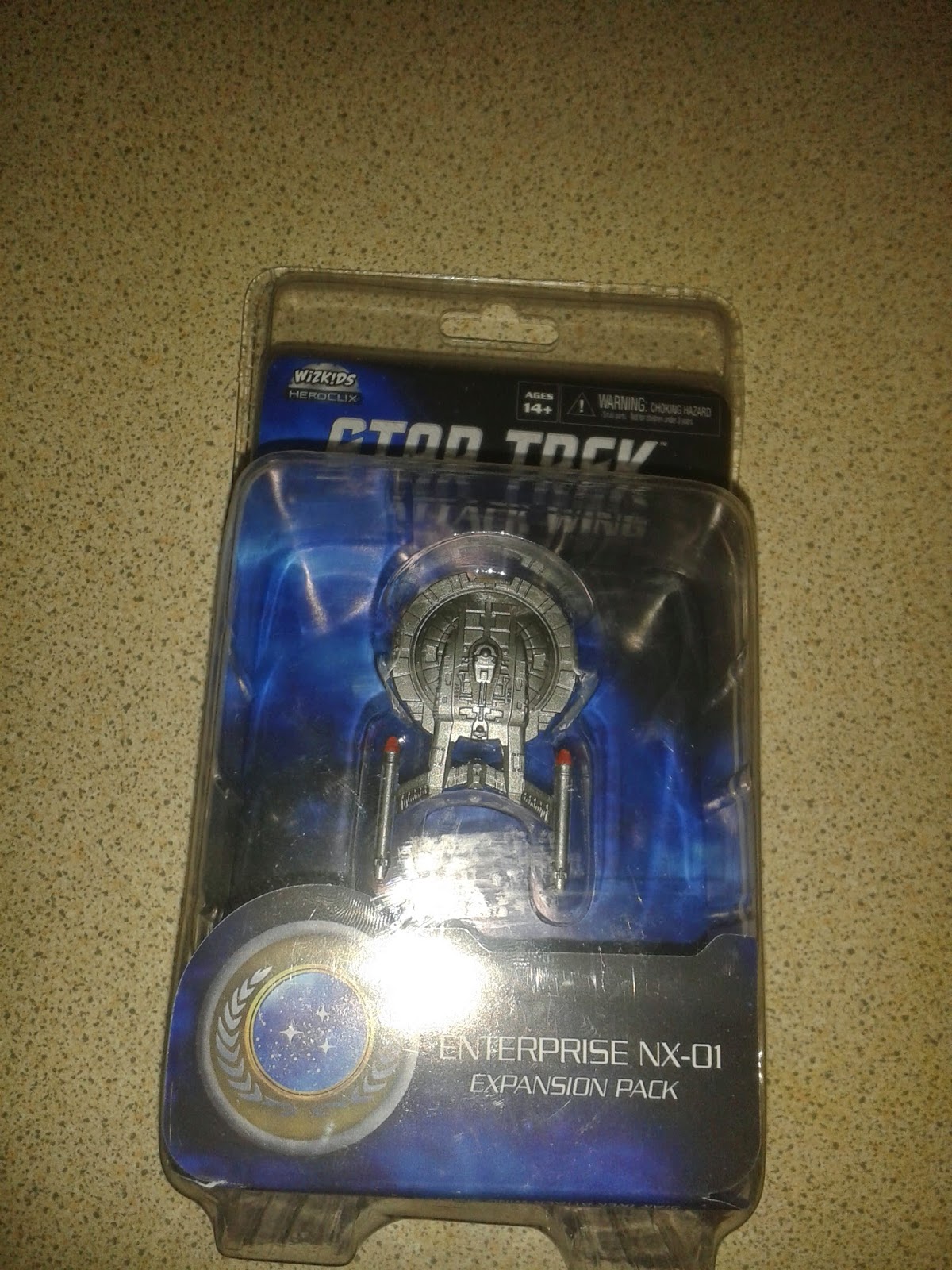 Lets take a look and see what comes in the pack for the Federations first Warp 5 Ship.

As always a nice slab of tokens to go with it 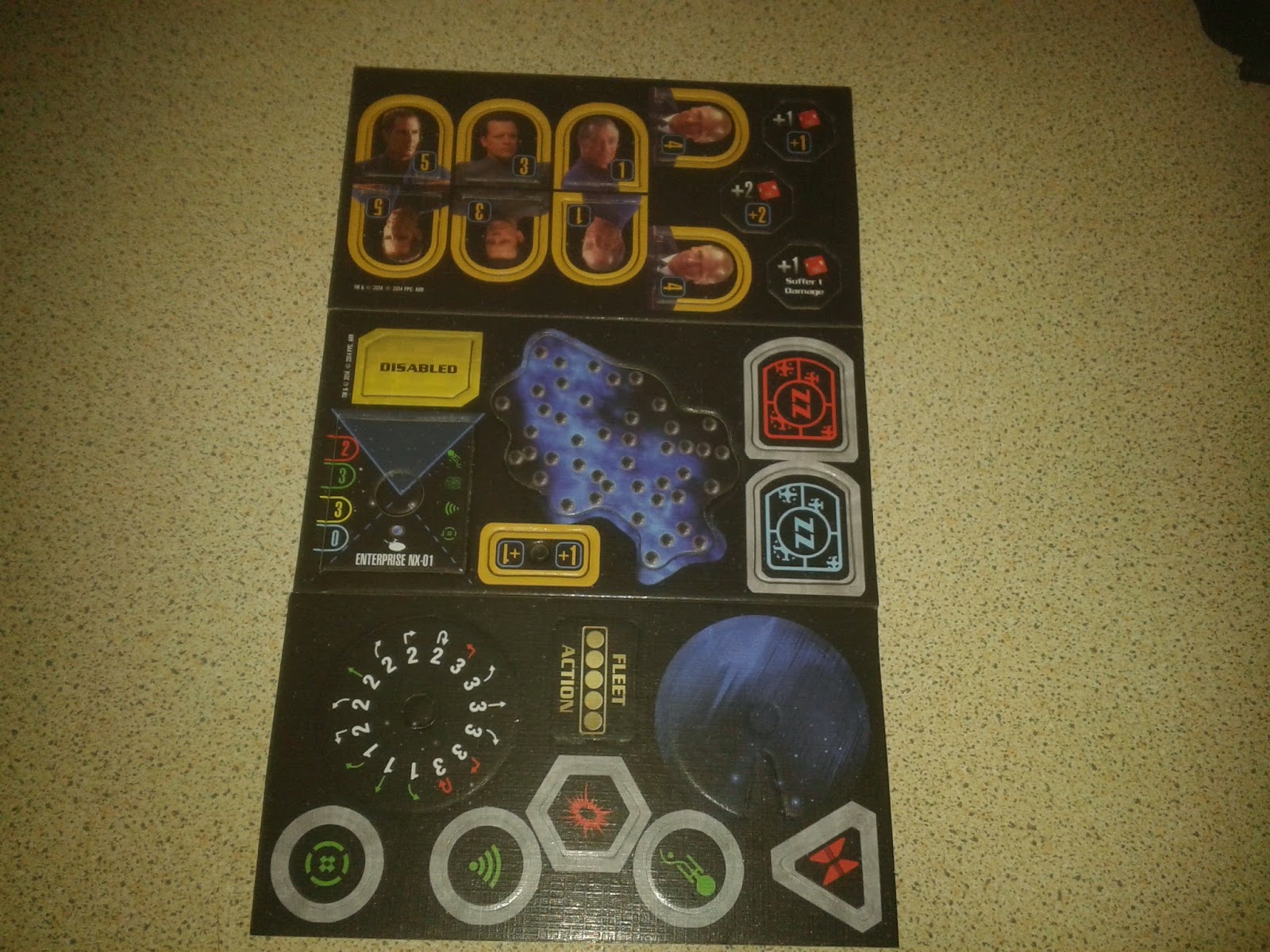 The Mine field goes with the mission that comes in the ship, always handy to have more minefields! 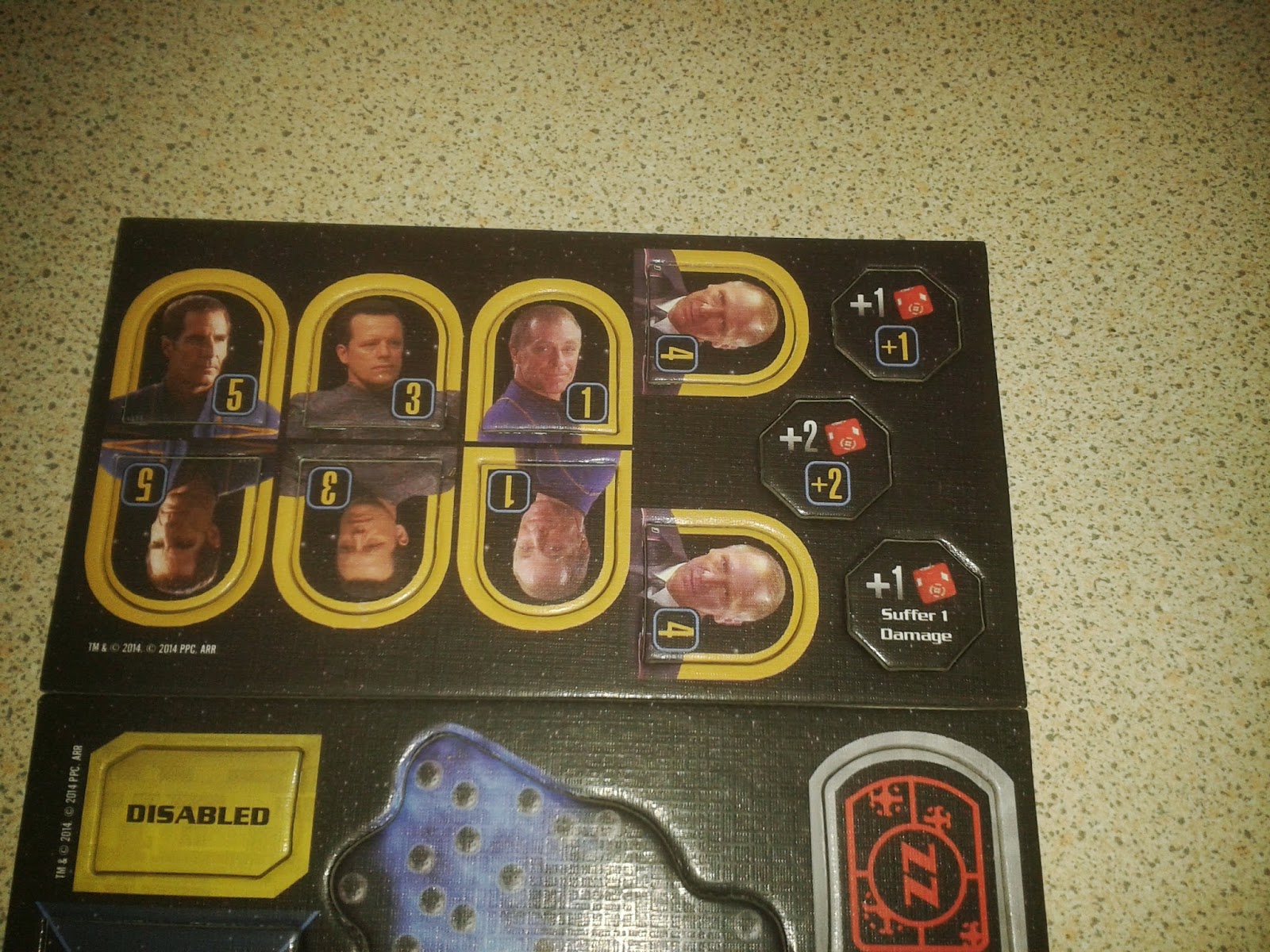 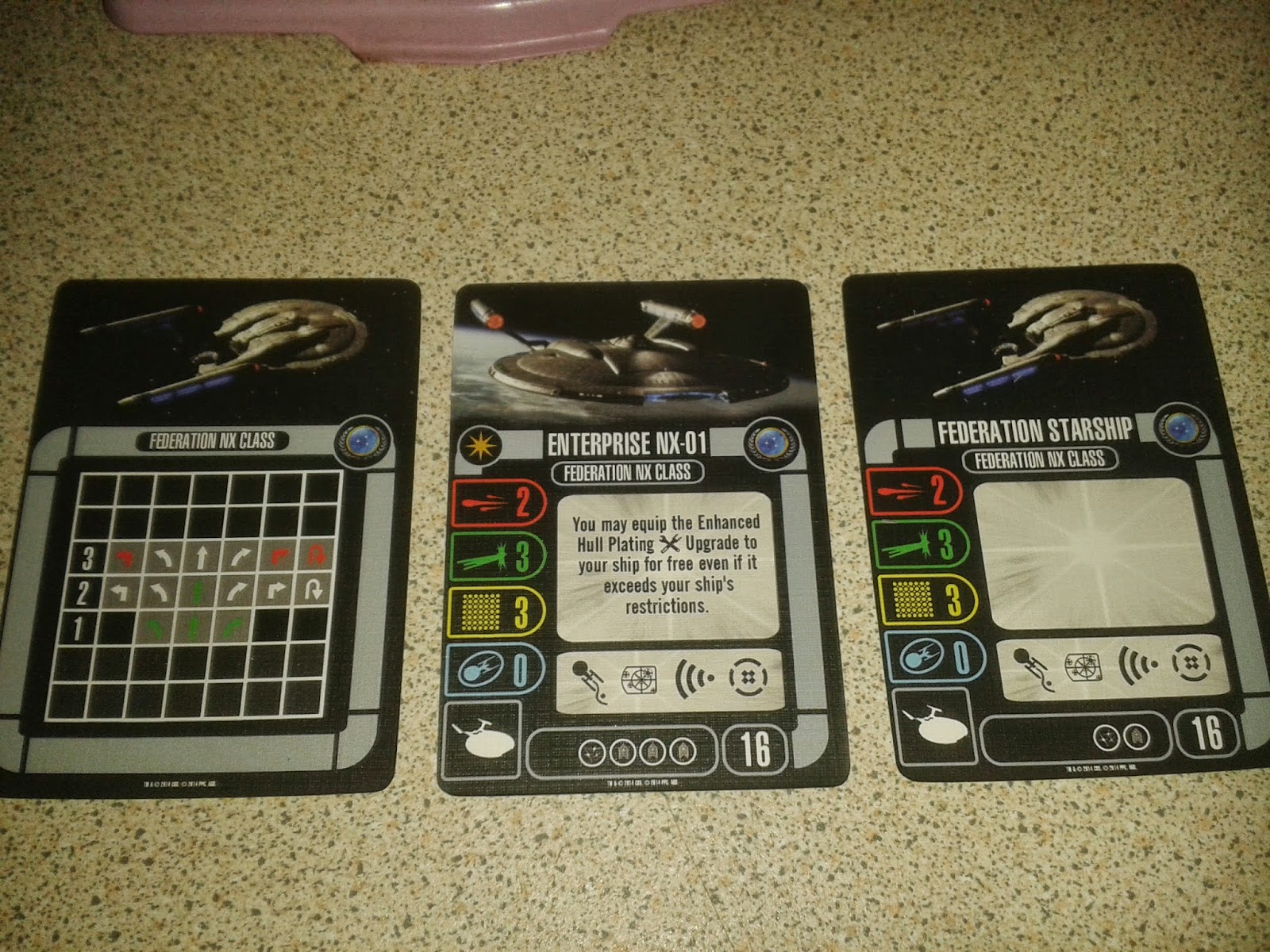 Not the fastest ship in the fleet topping out at a 3, but its pretty nimble with a 2 white comeabout.  The genric ship and named one have the same stats and points which is a first.  As you can see its not the hardest hitting ship, nor does it have any shields, or much in the way of hull.  It is very agile for a federation ship though, but you do not want to sling this thing into a dogfight with the big boys.  The named ships ability gives it a free upgrade which does make it more survivable. 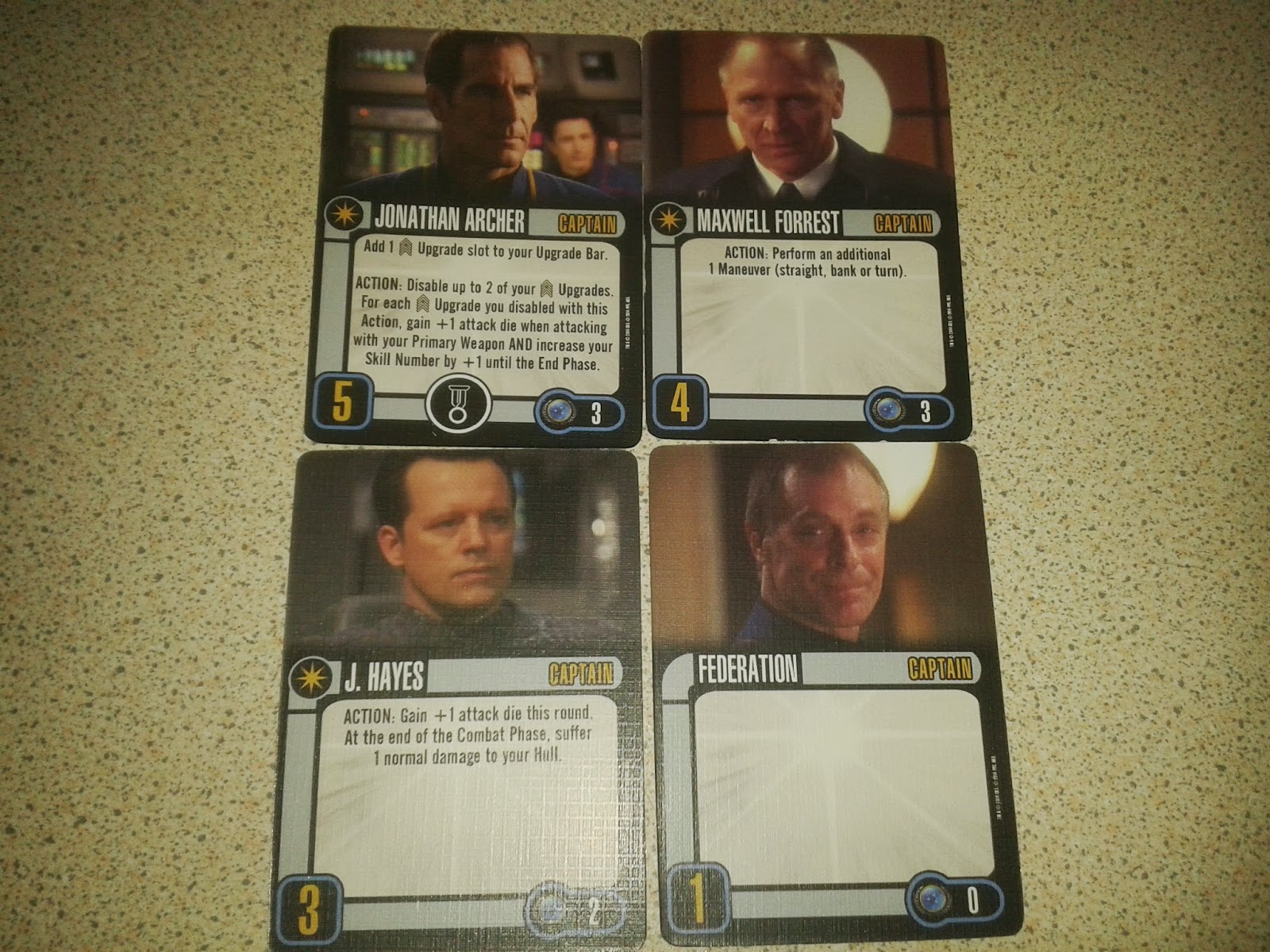 We have 3 captains, and of course our usual free generic one.  We have first of course Captain Archer.  Skill 5, but he adds a crew upgrade to your bar which is handy.  For his action you can disable up to 2 crew to increase your captain skill and primary attack by that value as well.  Used in the right combinations he can put some punch out.  Maxwell forest allows another bit of manoeuvre, which is handy to get the fragile ship out of arc when needed.  Finally we have Hayes, he lets you add an attack dice at the cost of a damage to your hull.  On a 3 hull ship, im not sure about that one! 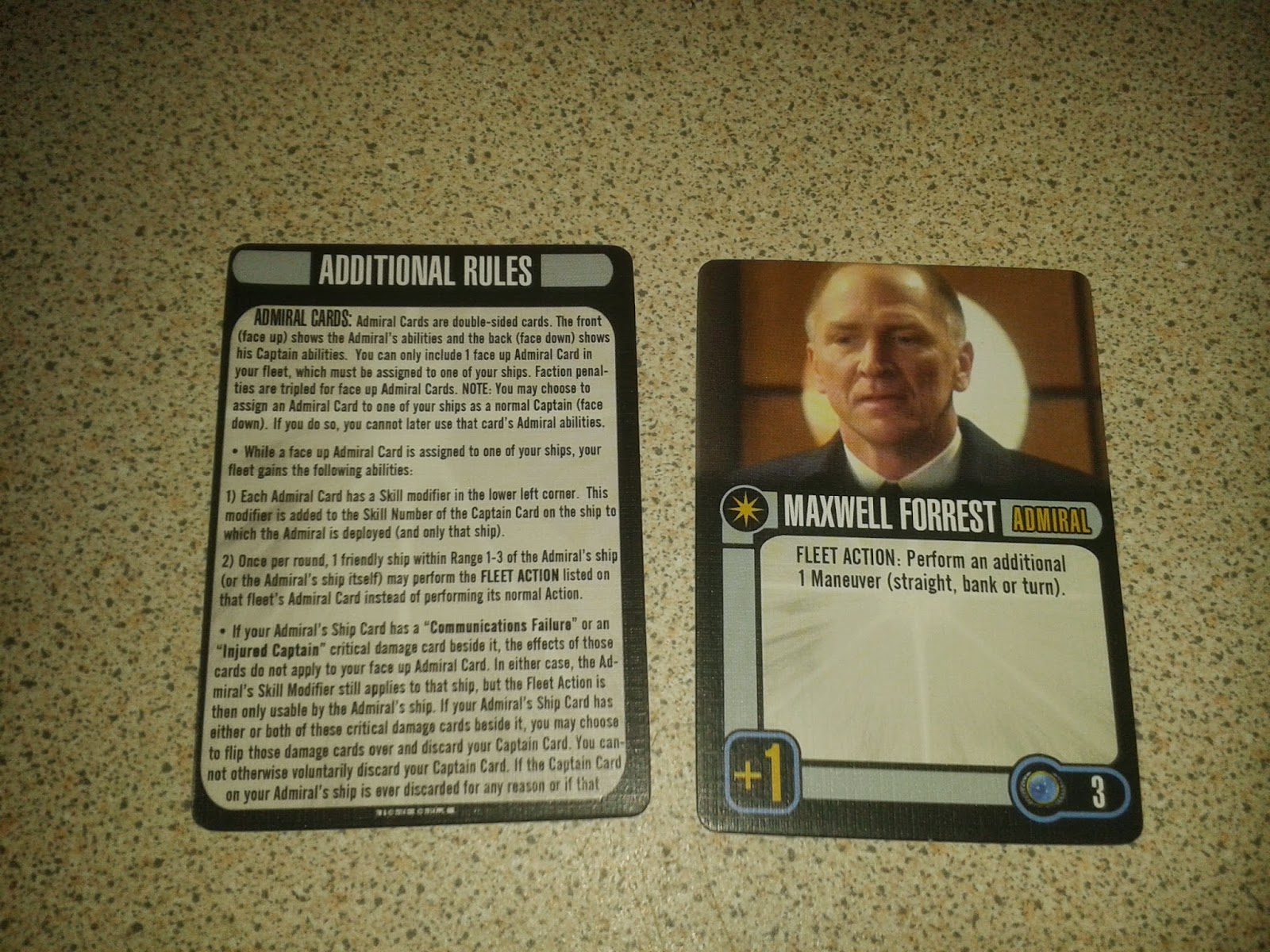 We get Forrest as an admiral as well, and the additional rules card to show you how admirals work. 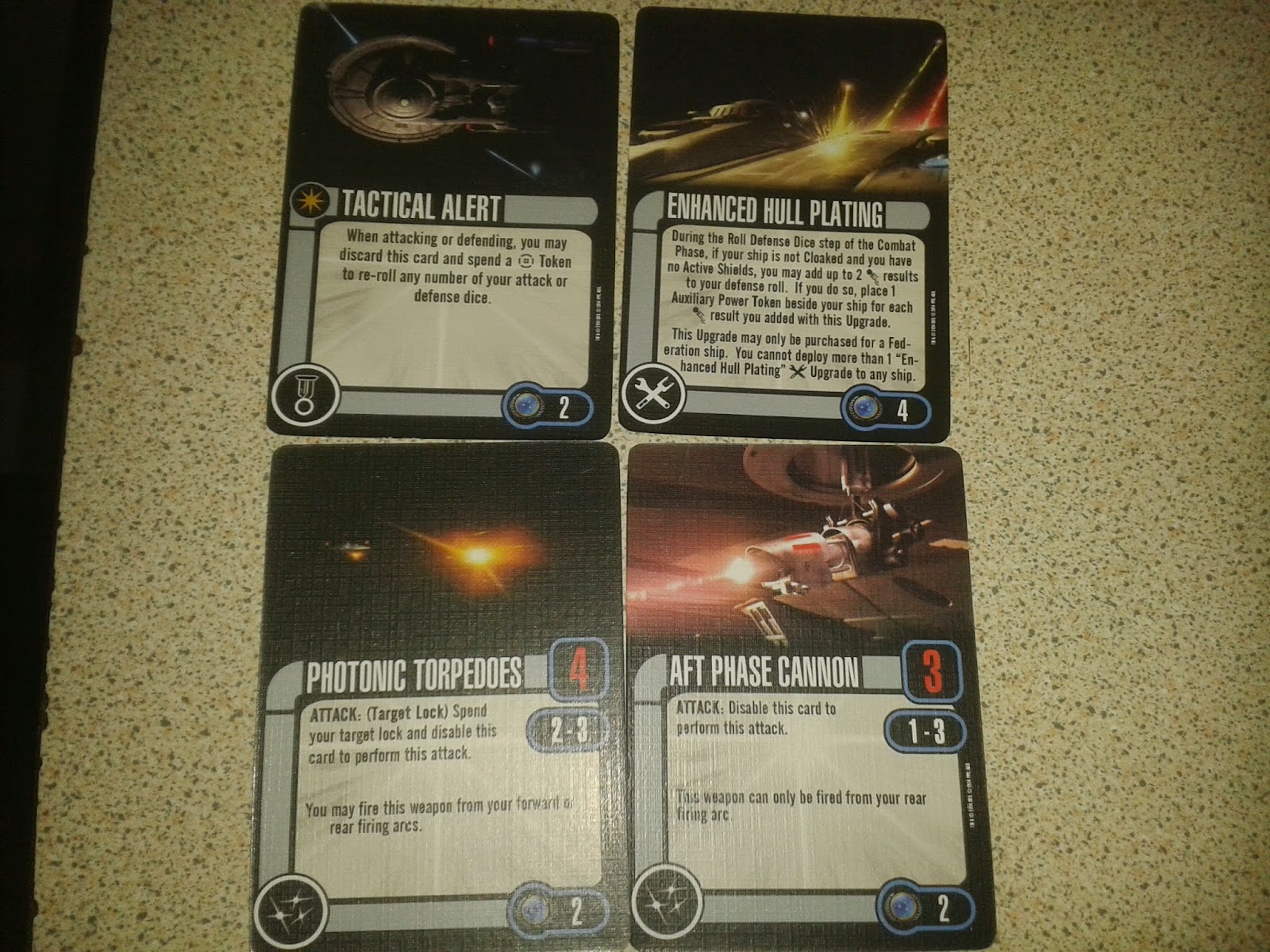 For Elite Talents we get Tactical Alert, which is a 2 point discard and it costs your battle stations token, but it does allow you to reroll any number of your dice.  The enhanced Hull plating which you can free with the named Enterprise adds to the survivability.  You can add 2 evades to your defence roll for the cost of an aux token.  It Means you need to land a minimum of 3 hits to do any damage, if the ship has an evade already that makes it 4 hits needed! and that does not account the 3 dice the ship rolls as well.  Weapons we have is the Aft Phase Cannon,  which gives you a 3 dice attack from the rear arc, very handy for the price!  Photonic torpedoes up the punch of the ship to add some firepower to your attacks at range. 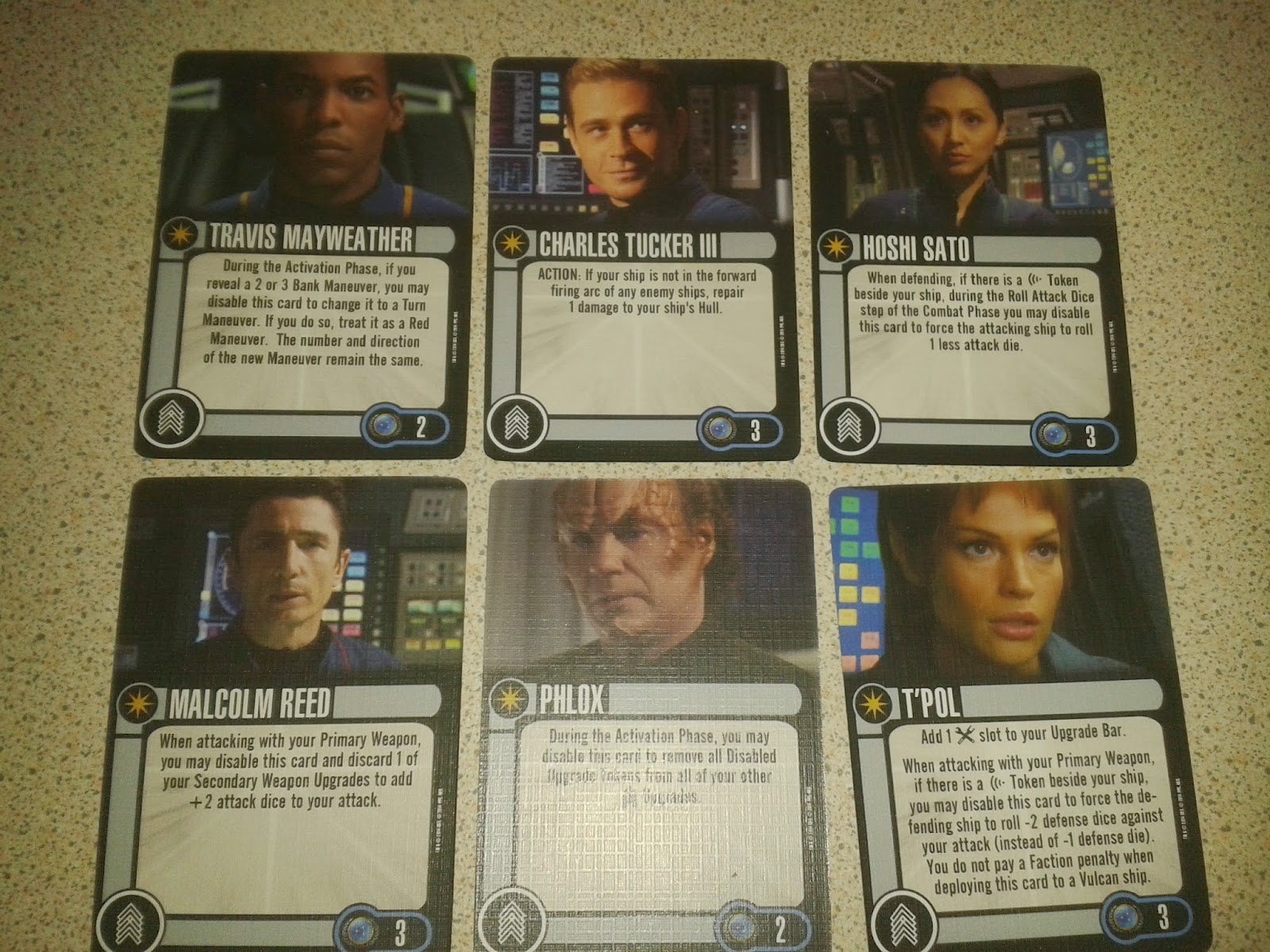 We get a lot of crew in the pack!  Travis first, he allows you to turn tighter for the cost of an aux power, useful indeed.  Tucker, or Trip as he should be called lets you repair your hull, which is vital on a light ship like this.  Sato can help you take less damage, for a disable.  Reed lets you add more attack dice for the cost of disposing of one of your weapons.  Dr Phlox, as well as being one of my favourites from the series is really useful, during the activation phase you can disable him to remove all disabled tokens from your crew.  The final crew, is my favourite, T'Pol.  She adds a tech slot to your upgrade bar, and when attacking if you have scanned you can get the enemy to roll 2 less defence dice.  With the combination of her, and archers ability you can hit pretty hard with this ship 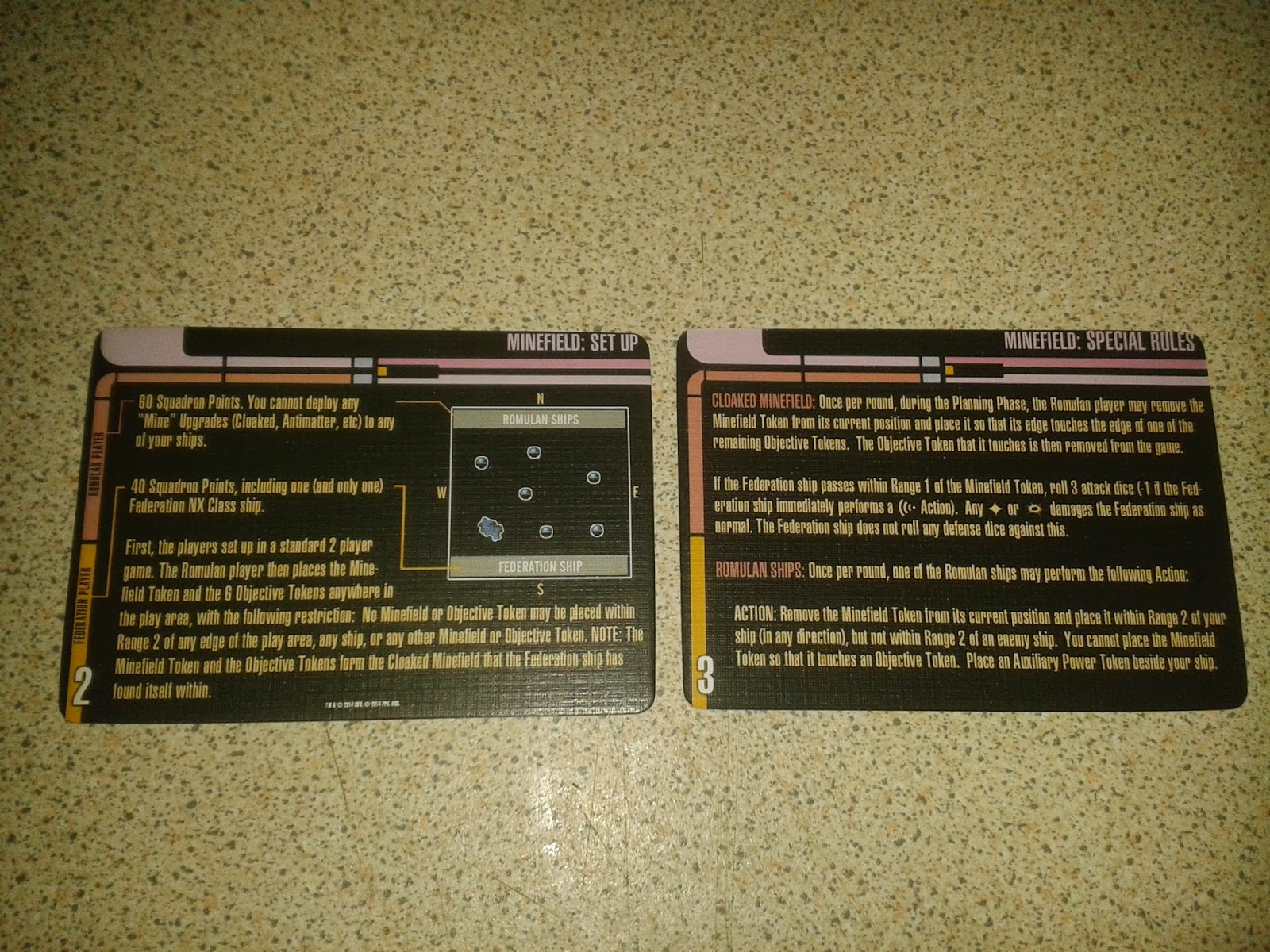 The mission this time is Minefield, it looks great fun, dodging through all the obstacles to escape.  im really excited to play it. 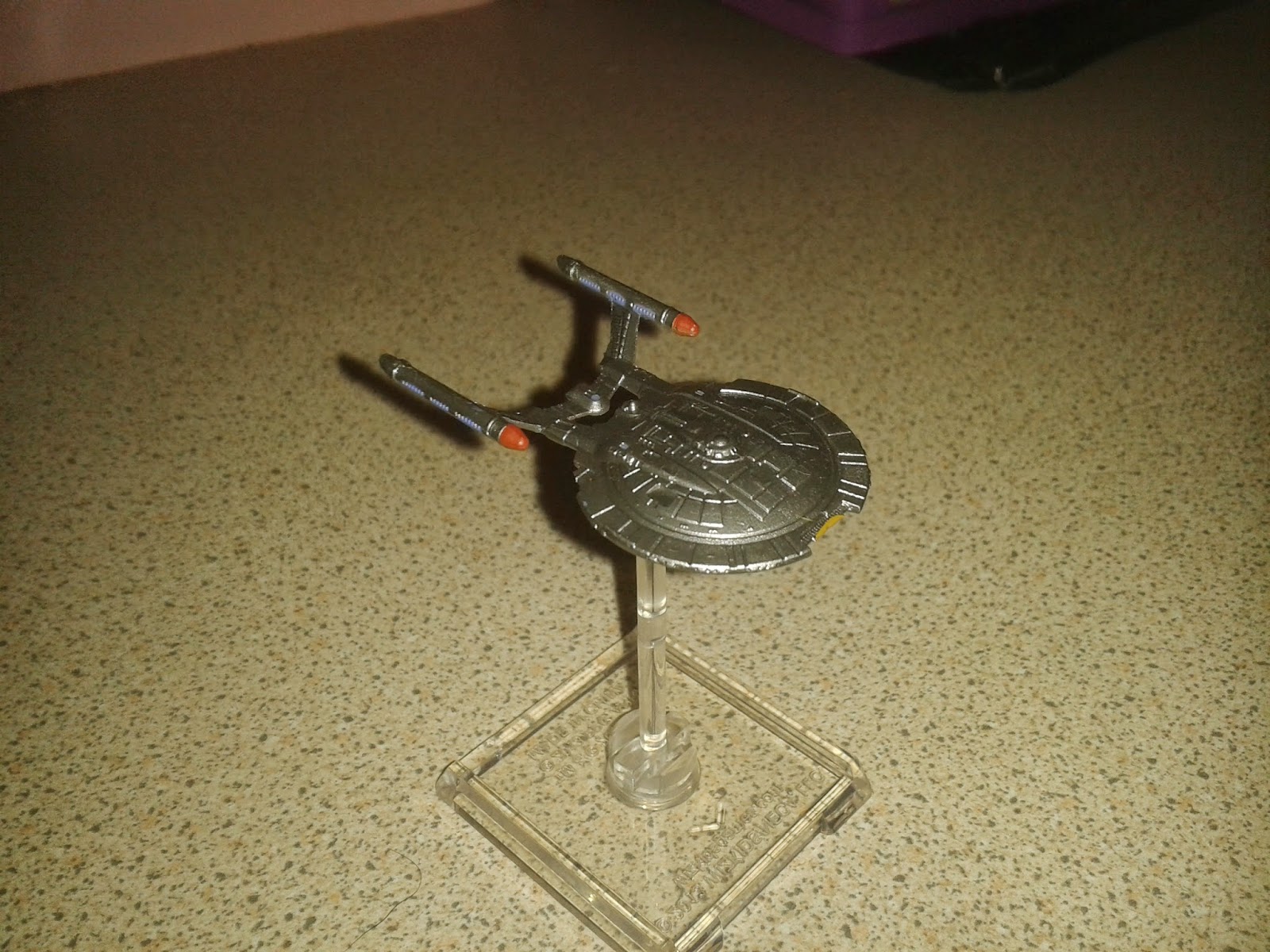 The model itself is accurate to the show, and very detailed, but not very well painted.  There is not much colour on it, but there wasn't on the show I guess. 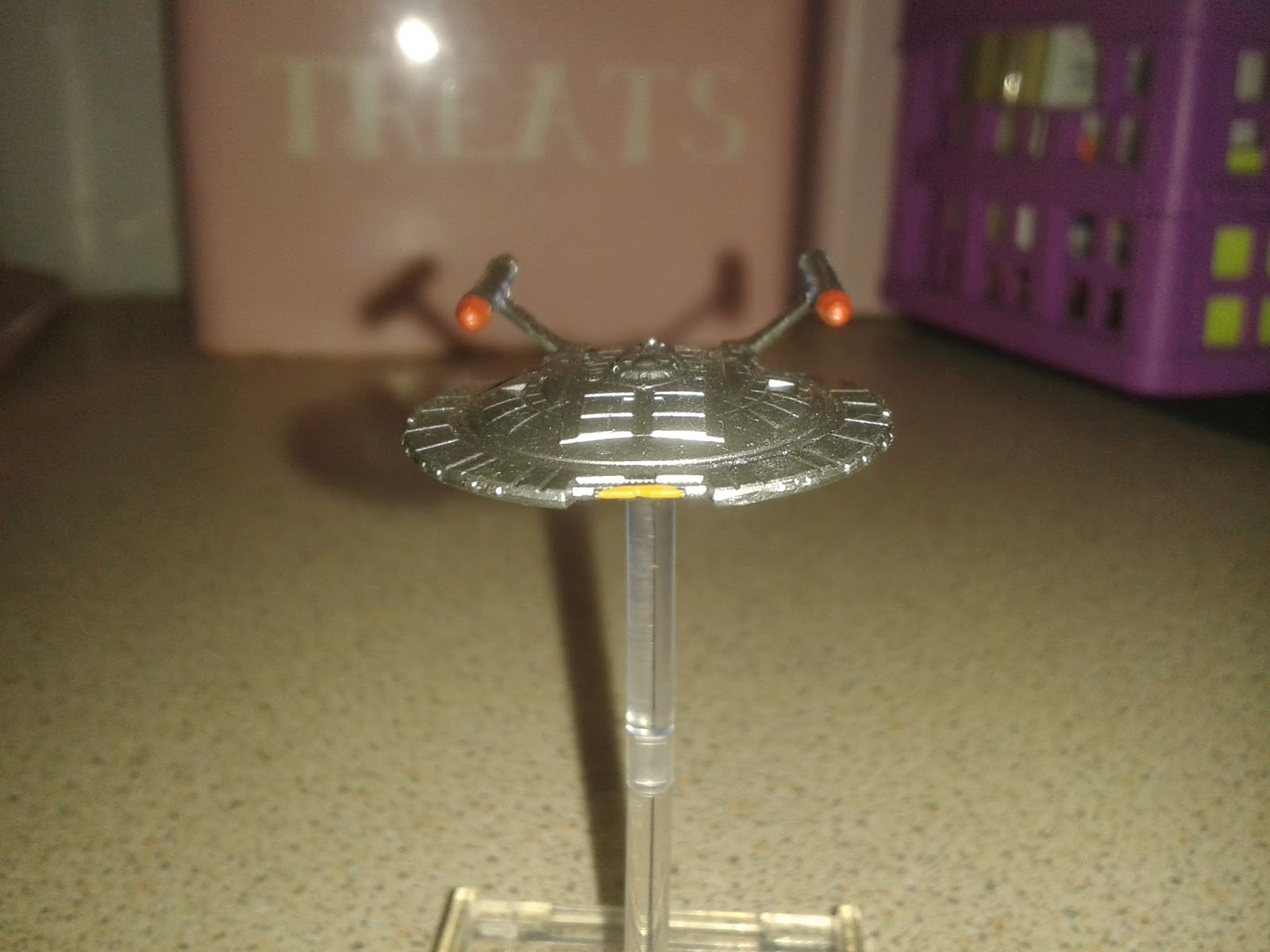 A nice wash, or drybrush would bring out all the details very nicely though. 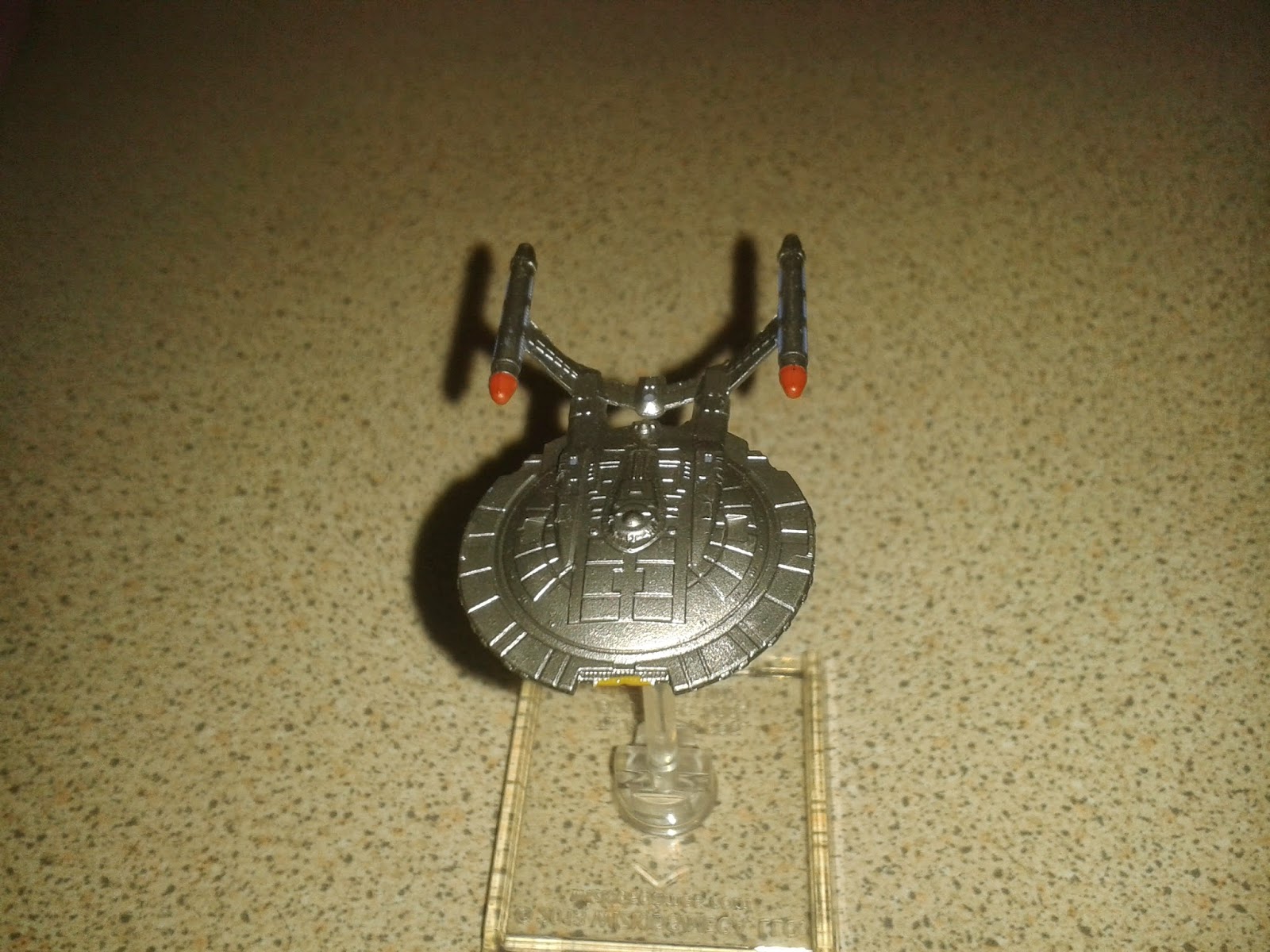 I like how you can trace the design o the federation ships from this one. 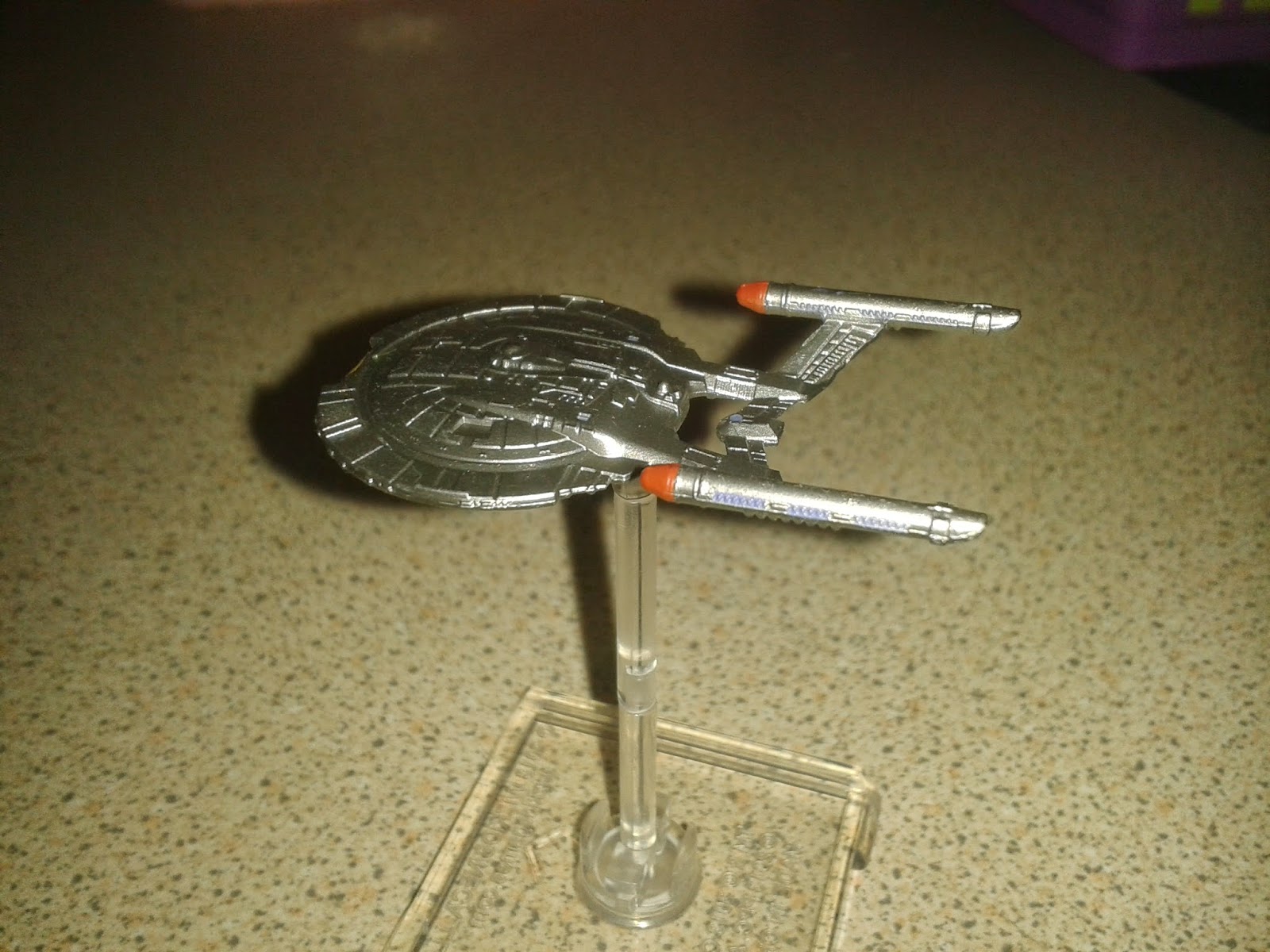 All in all a great expansion pack, yes it does not hit hard, but it is a fun cheap ship to add to the fleet with a good looking mission as well.  Well worth a look at, and a solid addition to the fleet.
Labels: Attack Wing Star Trek unboxing wizkids