I thought I would dig one of my old classic favourite board games to take a look at and a review of. 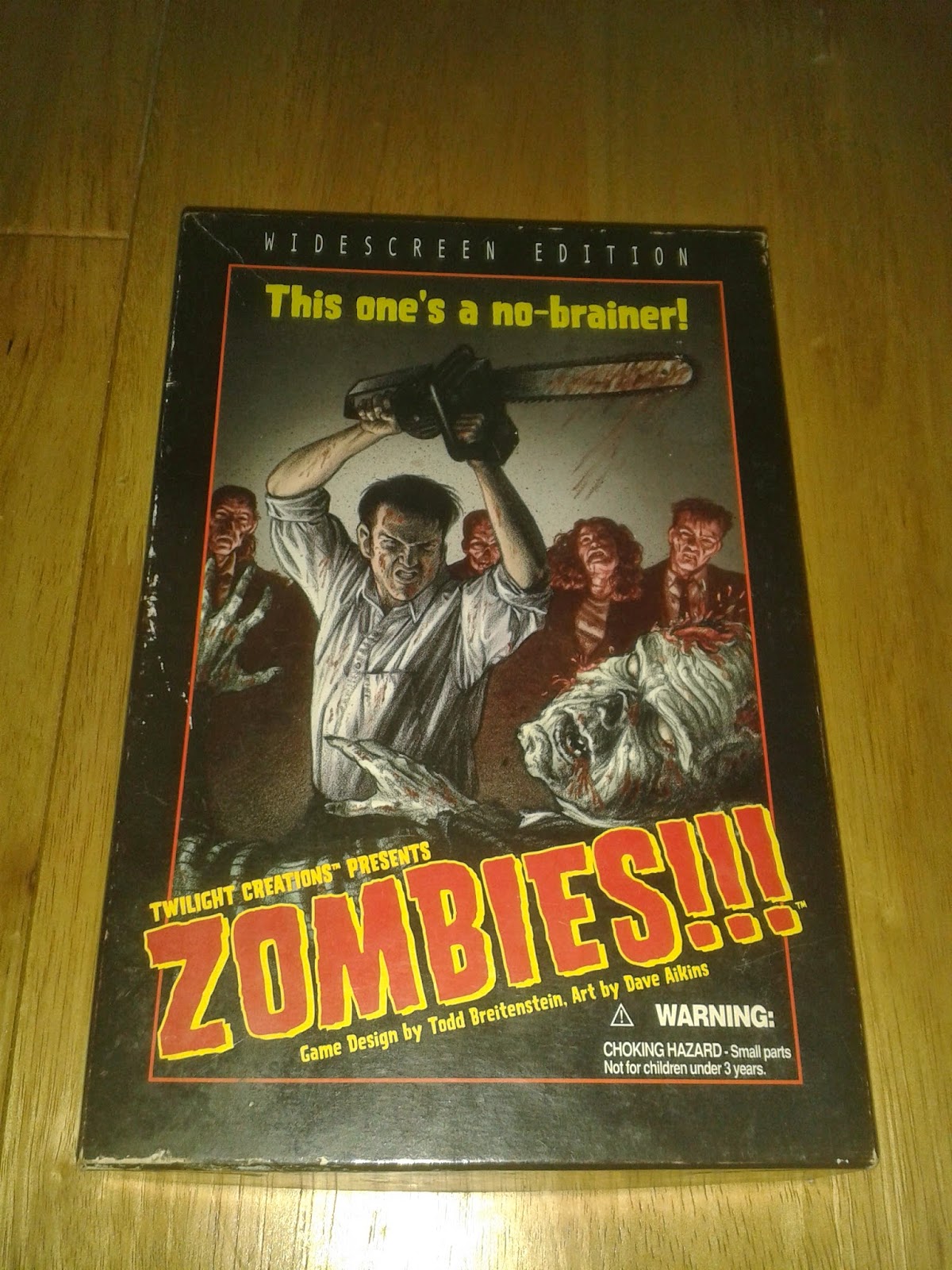 I picked this up not far off 15 years ago, and it still sees regular play! its a great fun simple game.  Its not a big box, and has great artwork on it which has that "B-Movie" look which I love. 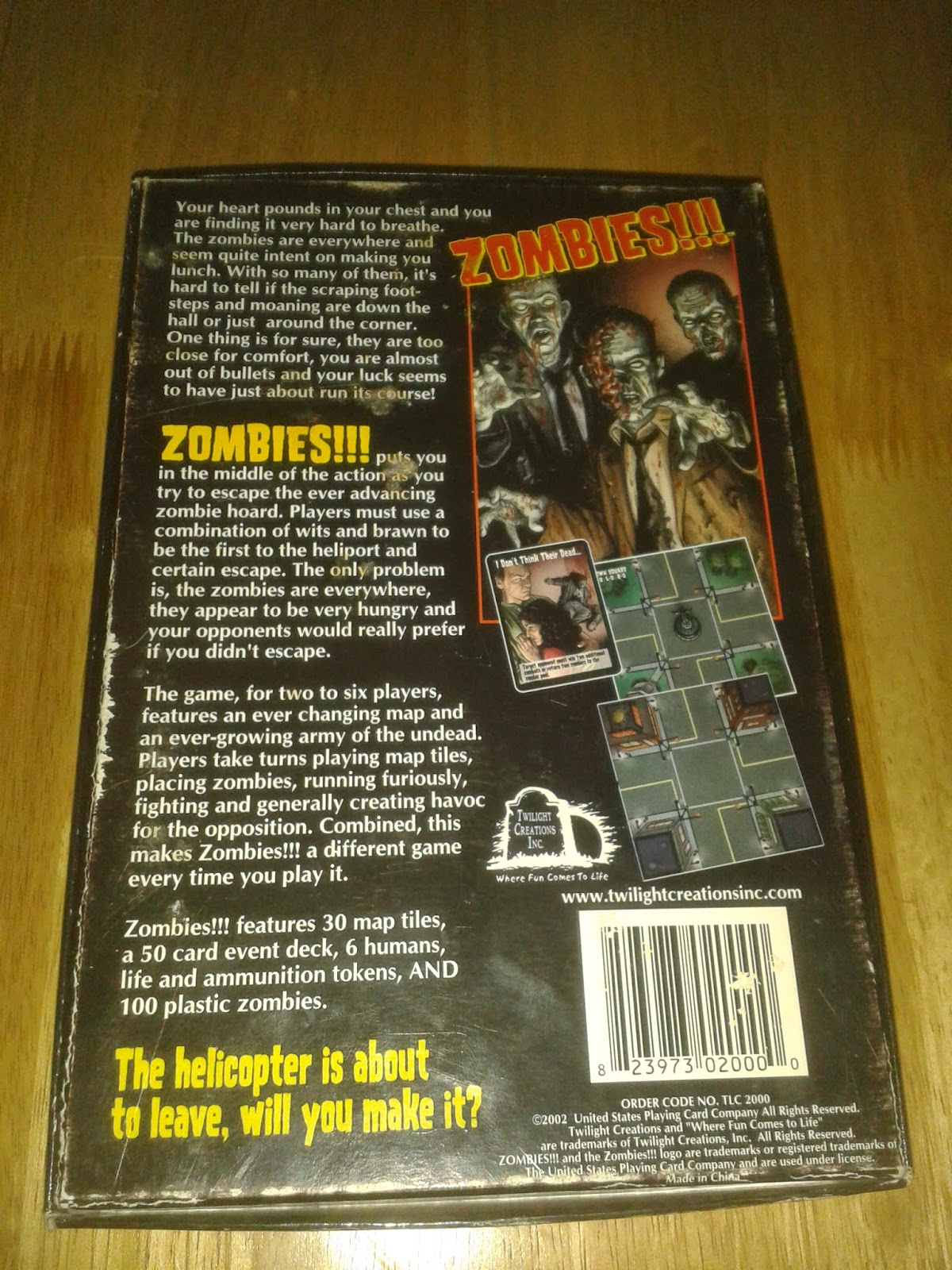 
Contents first, you get a deck of action cards 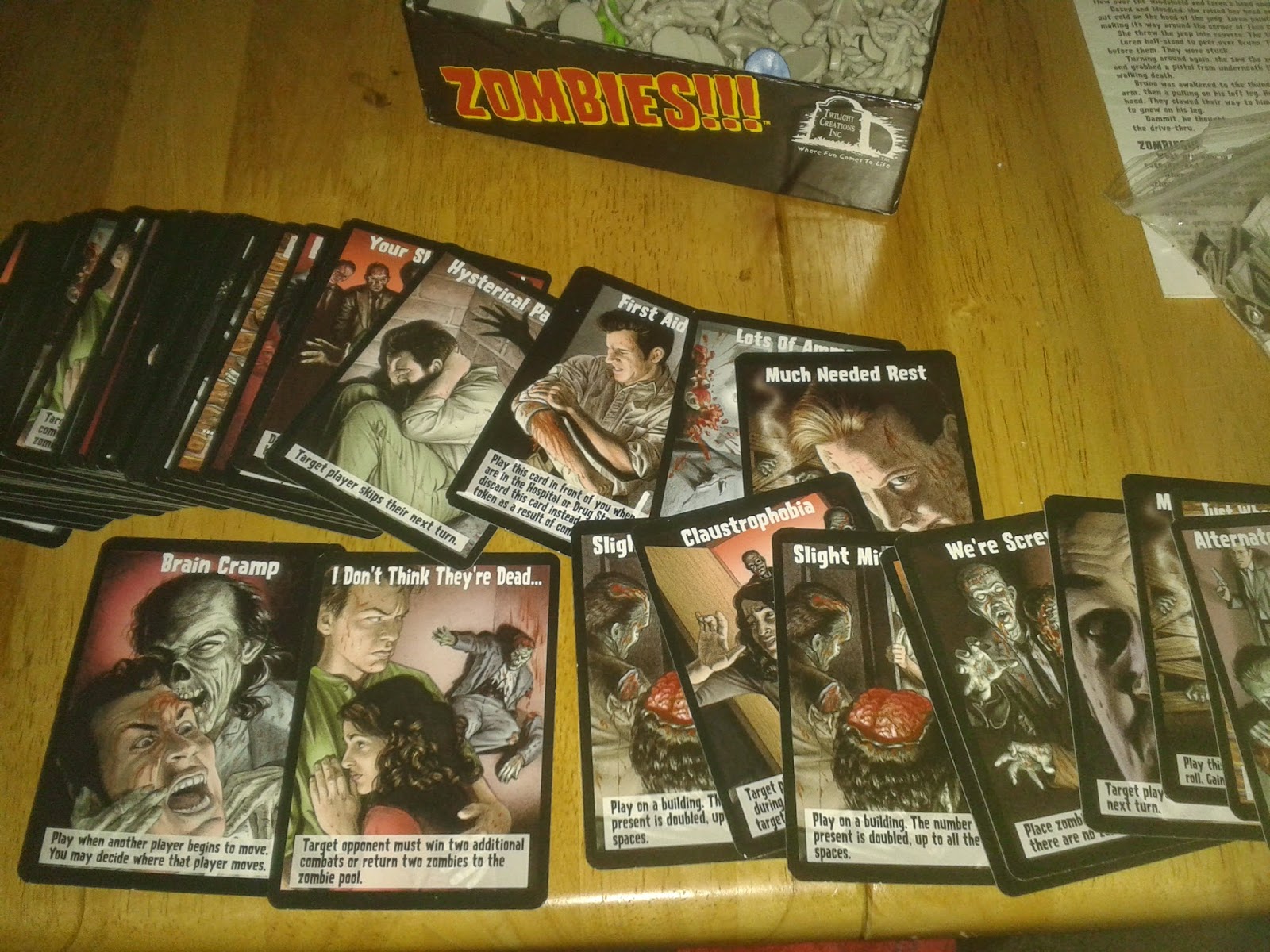 Again they feature that great artwork. 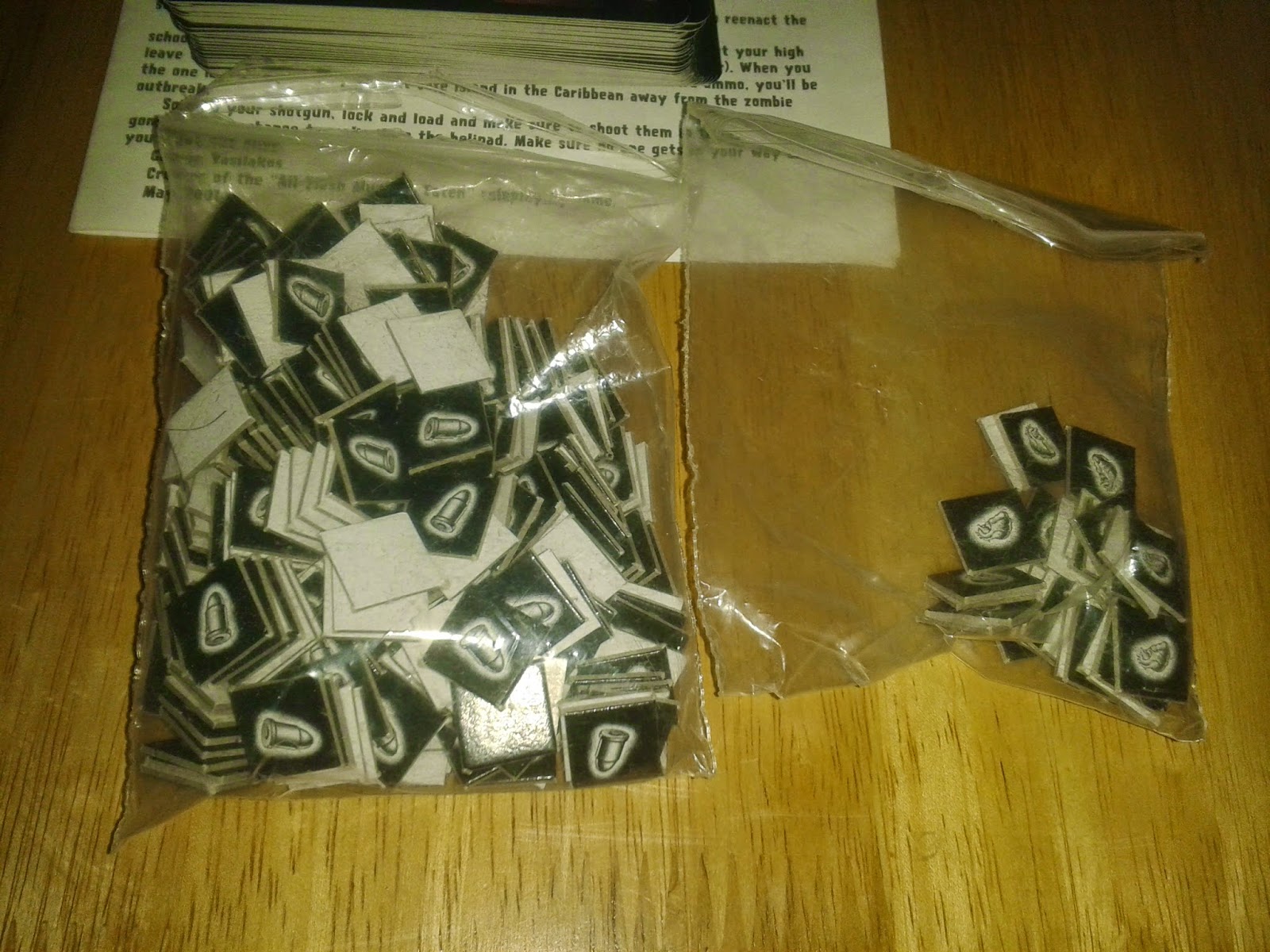 Two sets of tokens, bullets and hearts.  I will come to them later.

The Gaming tiles. These are used to build your town layout as you play. They ensure no play through is the play and every city is different. 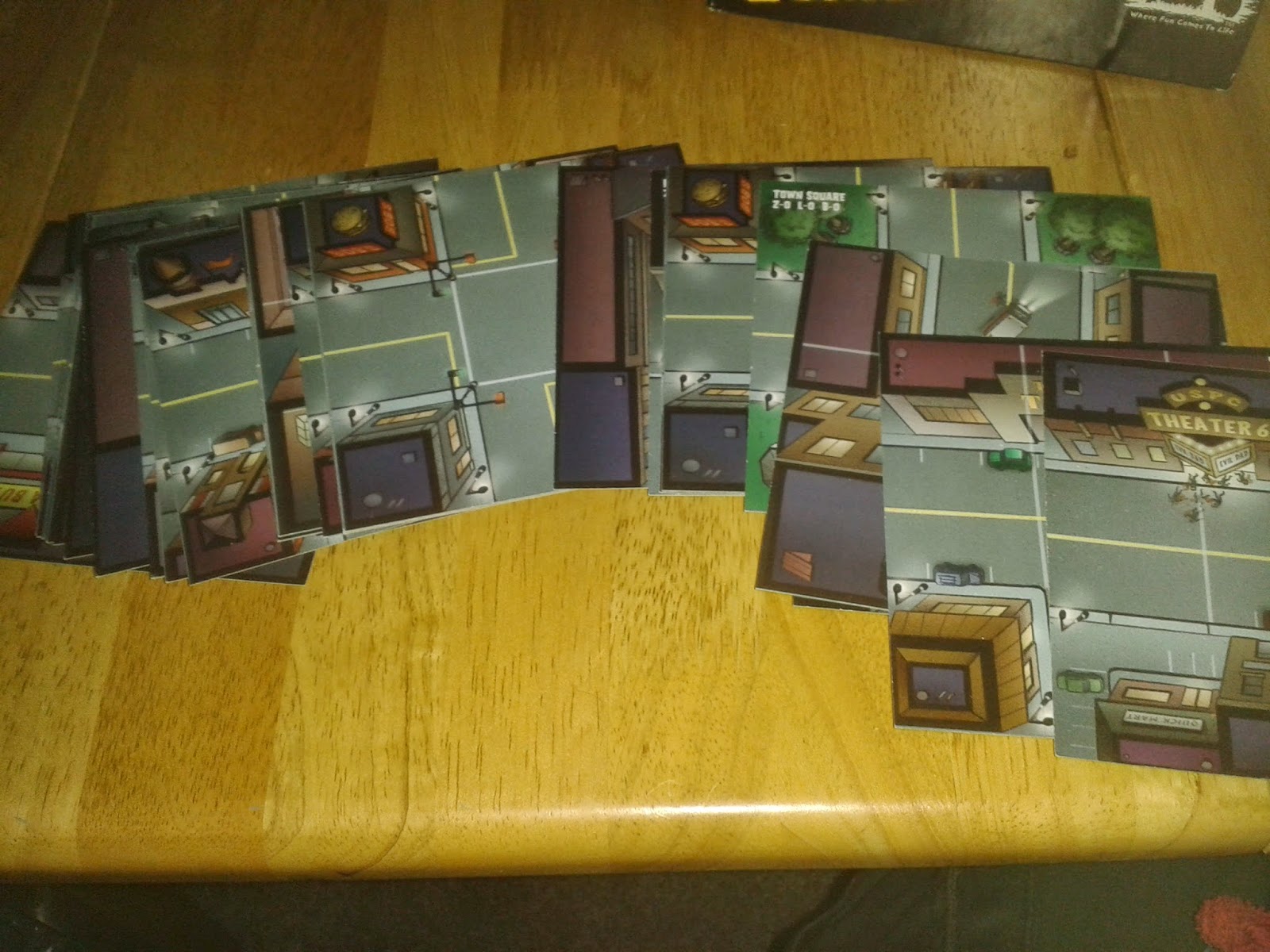 Solid artwork, divided into squares for movement.
Then we have the models, we have 6 hero models, all the same sculpts just different colours 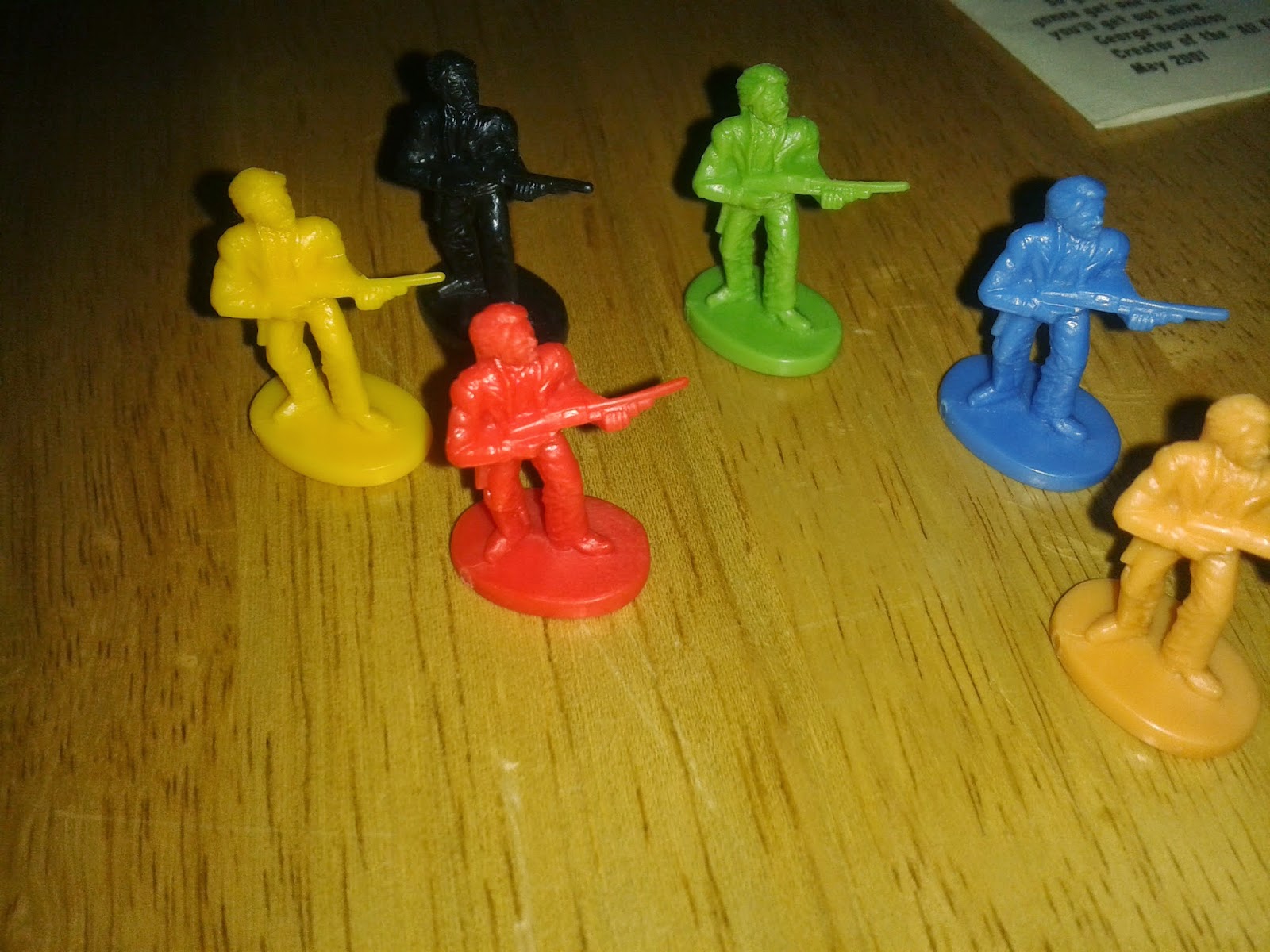 They are not great if you want to paint them as they are soft plastic,but perfectly fine as player counters in a board game. 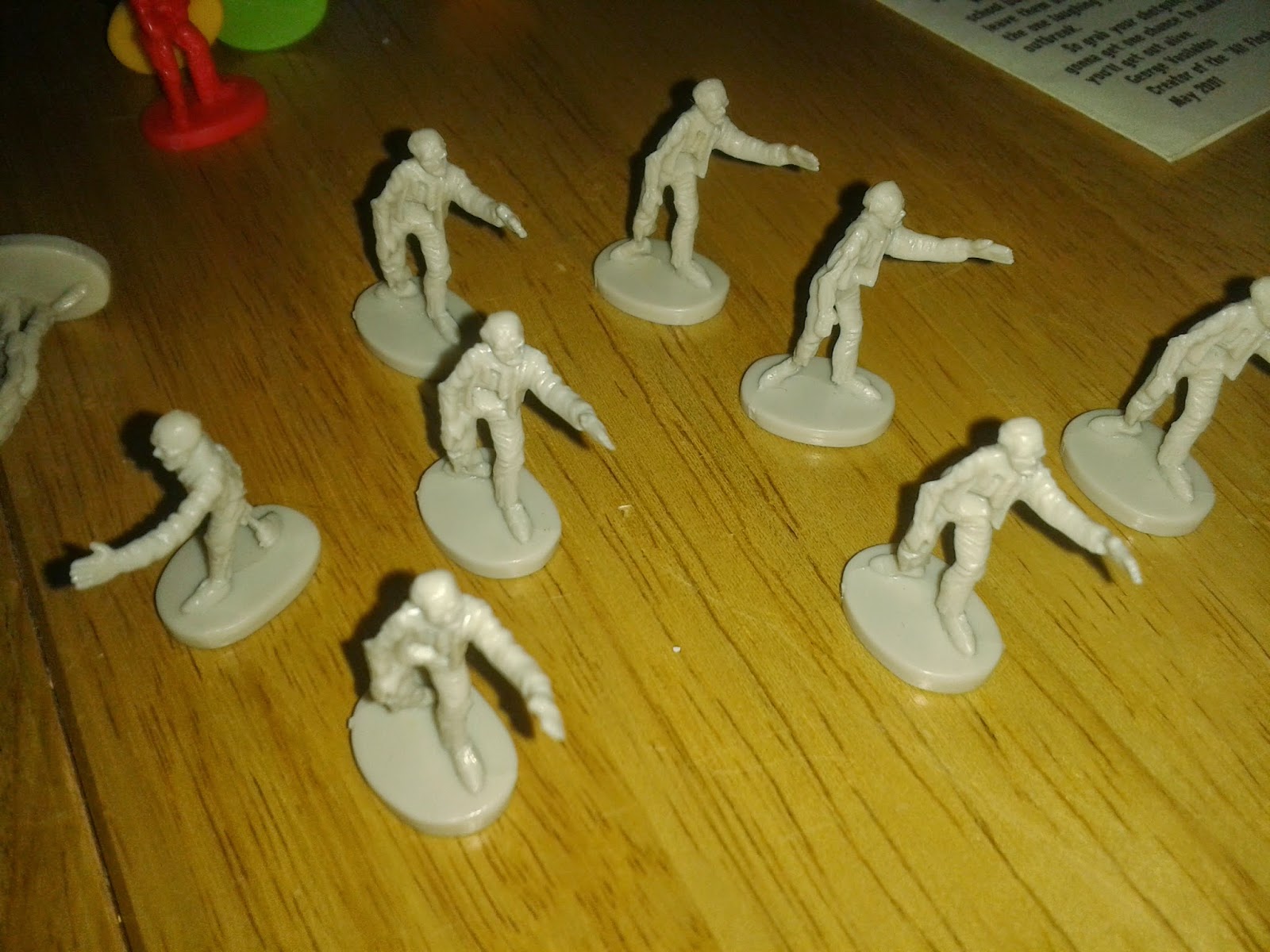 Then 100 of the same pose zombie models. Again soft plastic so they do bend easily, but then they are easy to bend back into shape.

The objective is to reach the helipad and escape, or be the first player to kill 25 zombies.

The game is for 2 to six players, you each pick a survivor model, and place down the town centre tile.
then each player is dealt a hand of 3 cards. Given 3 life (heart) tokens, and 3 bullet tokens.
The first player draws a roadmap tile, and places it down to form a new square, then places as many zombies on it as there are entrances to the tile.  If it is a place, like the fire station, toy ship etc it tells you how many zombies, how many hearts and how many bullets go in the building. 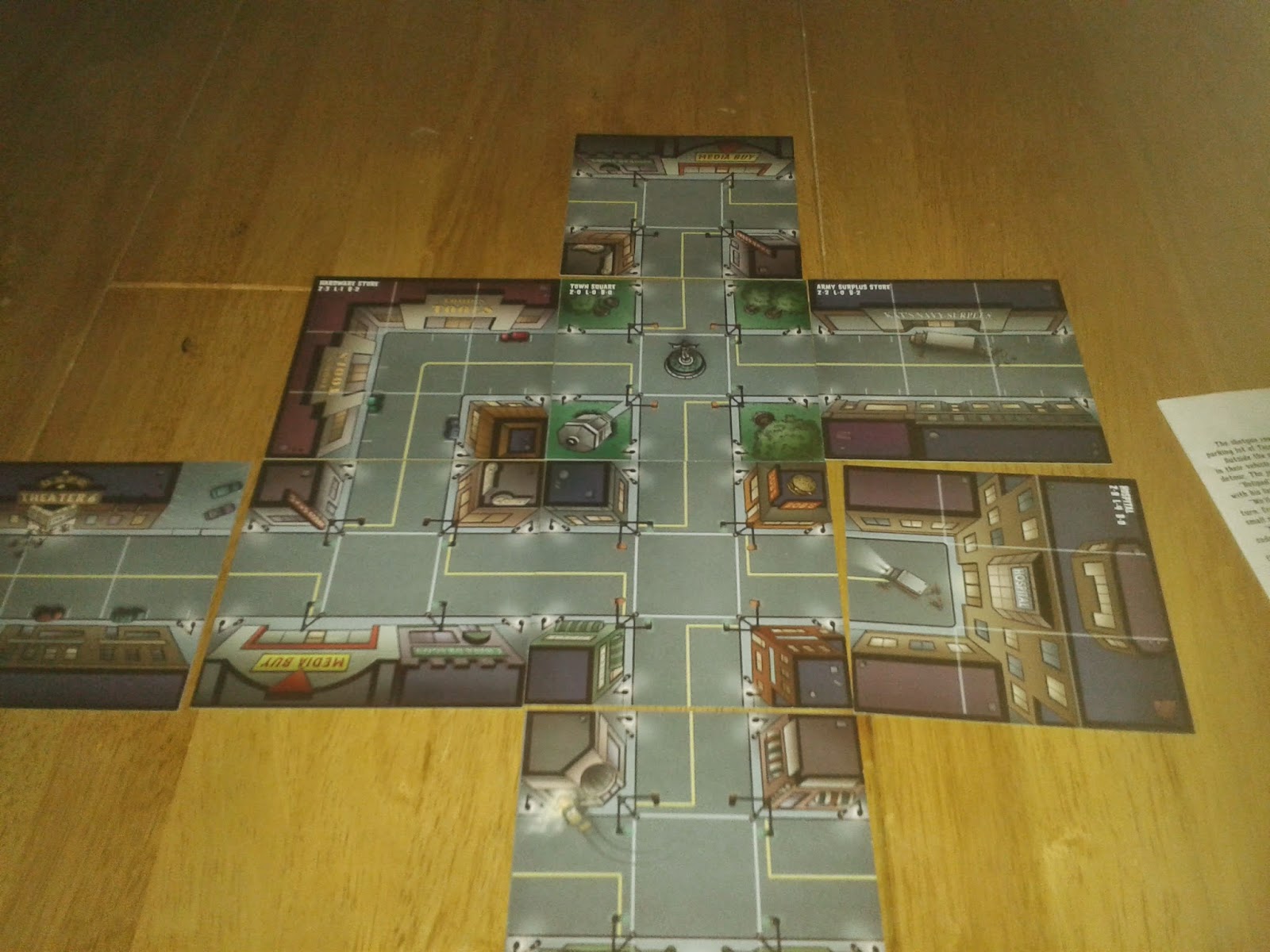 The player then rolls a dice to see how many squares he can move, moves up to that allowance and fights any zombies he meets on his way.  To fight a zombie you roll a d6, if you get a 4 or more you kill it. If you get less you can spend a bullet token to add 1 to your roll.  For example you roll a 3, you can spend one of your bullets to make it a 4 thus killing the zombie.  Heart tokens are used for a re-roll. If you roll a 1 for example, you may not want to spend all your bullets to brin it to a 4, so you can trade in a heart and re-roll the dice.  This can continue until you have no tokens left.  If you fail to kill the zombie and you are all out of zombies you are considered eaten, your Zombie kill tally is halved and you are returned to the start.

You can play a card in your turn, these can add a bonus to you, or mess with you opponent.  Then at the end you roll a d6 and you must move that many zombies 1 square each.  You can use this to initiate combat on one of your opponents, or try to block his movement up by forcing him to fight through hordes, or if you want bring them to you so you can kill them quicker!

Then the next player goes through the turn and so on 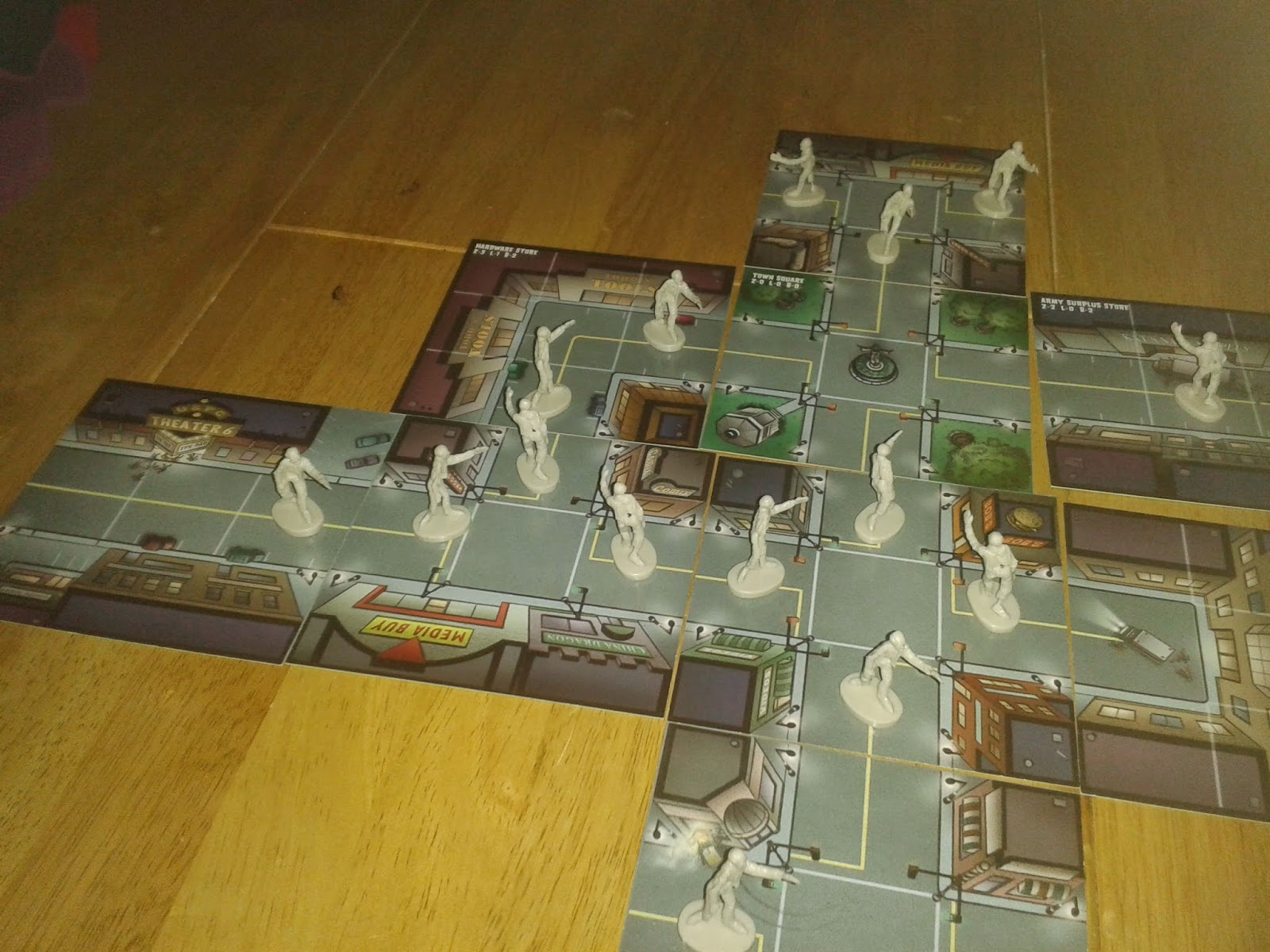 You can se the named cards that tell you what goodies are in there, so it is worth raiding these shops to replenish your supplies.


Its a quick game to learn, has some random elements like movement, and some tactical elements like when to play your cards, which you can drop  up to one of each round if you have used them.
All in all a great fun game, with many many expansions and versions of it now.  Go take a look and pick one up, you will have a great time.