Olivia and I decided to play through the whole 10 scenarios found in the main rulebook, and thought we should report on them, show you how the game looks out of the box in action, and how much fun we had!.  Everything you see and we used in this all comes in the main box.

Sergeant Olivia was worried, she wasn't with her men, she always liked to lead from the front, but she had her own mission to perform so had sent a section off when the news came in about potential tech to recover.  They where 6 of her best men, they should be fine right?......

Martin Warlord Martin looked at the invasion plans..... here... pointing at the glow map... there appears to be creatures worth study.  Send 4 minions to collect specimens, if you encounter the humans.... destroy them all.

We started with Scenario 1 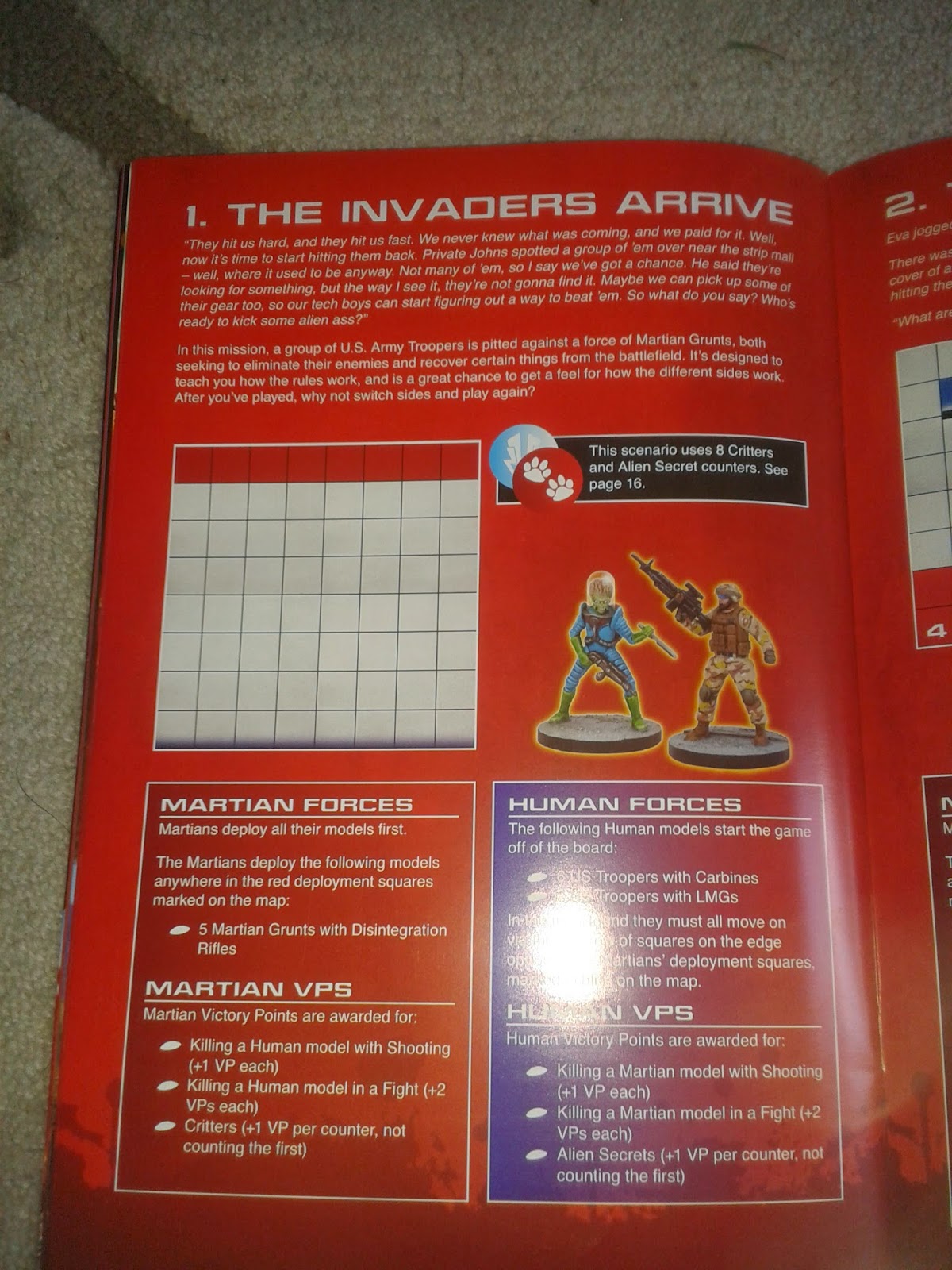 This is scenario 1 out of the 10 in the book, they work really well to get you used to the game before adding in more things, more troops, heroes and so on.  We prepares the gaming mat from the box and built up some terrain so the table looked nice and full 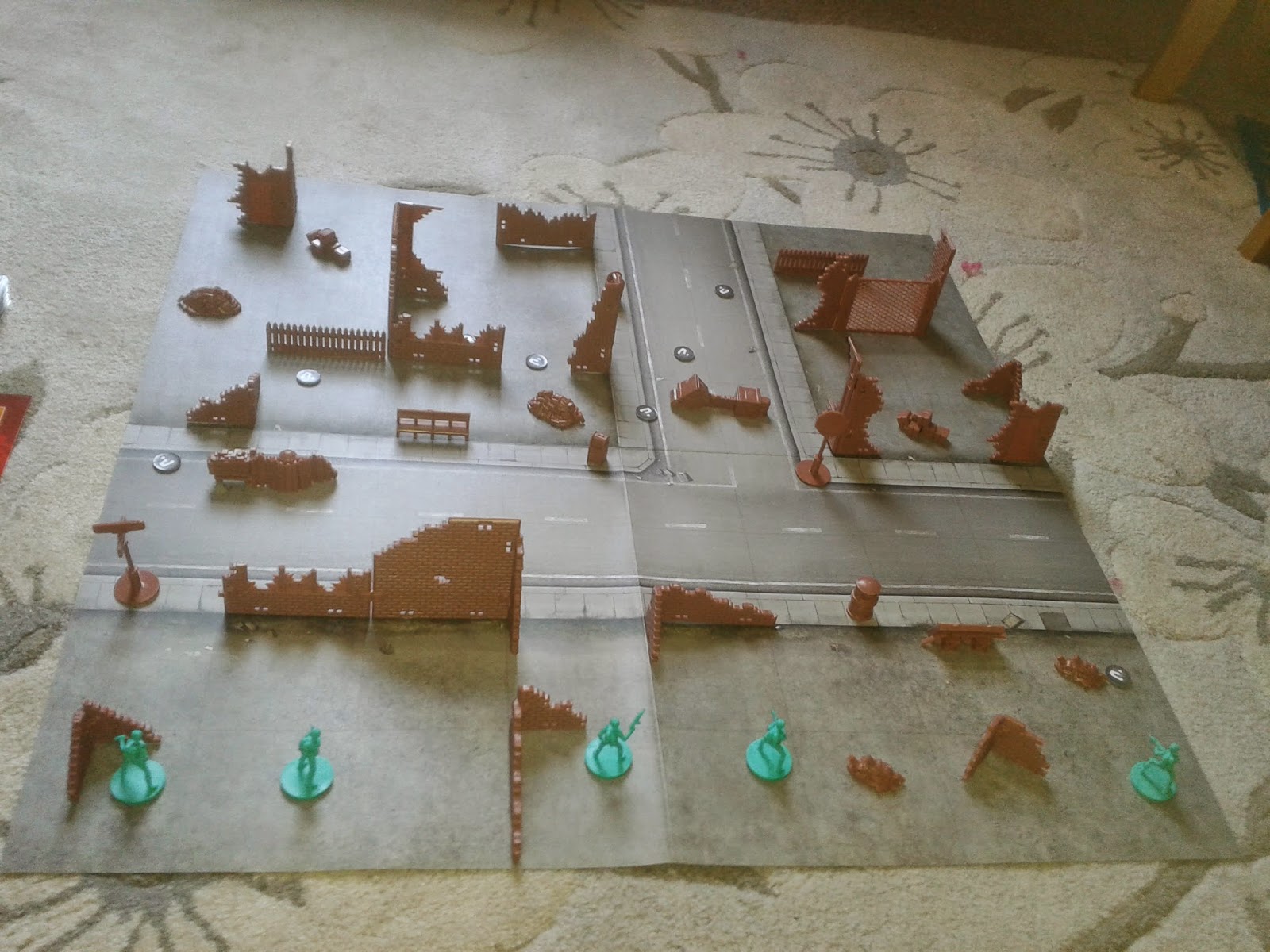 The mission calls for 5 Martian grunts starting on table.  The Scenario shows where you can set up.  I was voted as Martian Warlord by Olivia, so she could take control of the Humans as they are the "goodies" 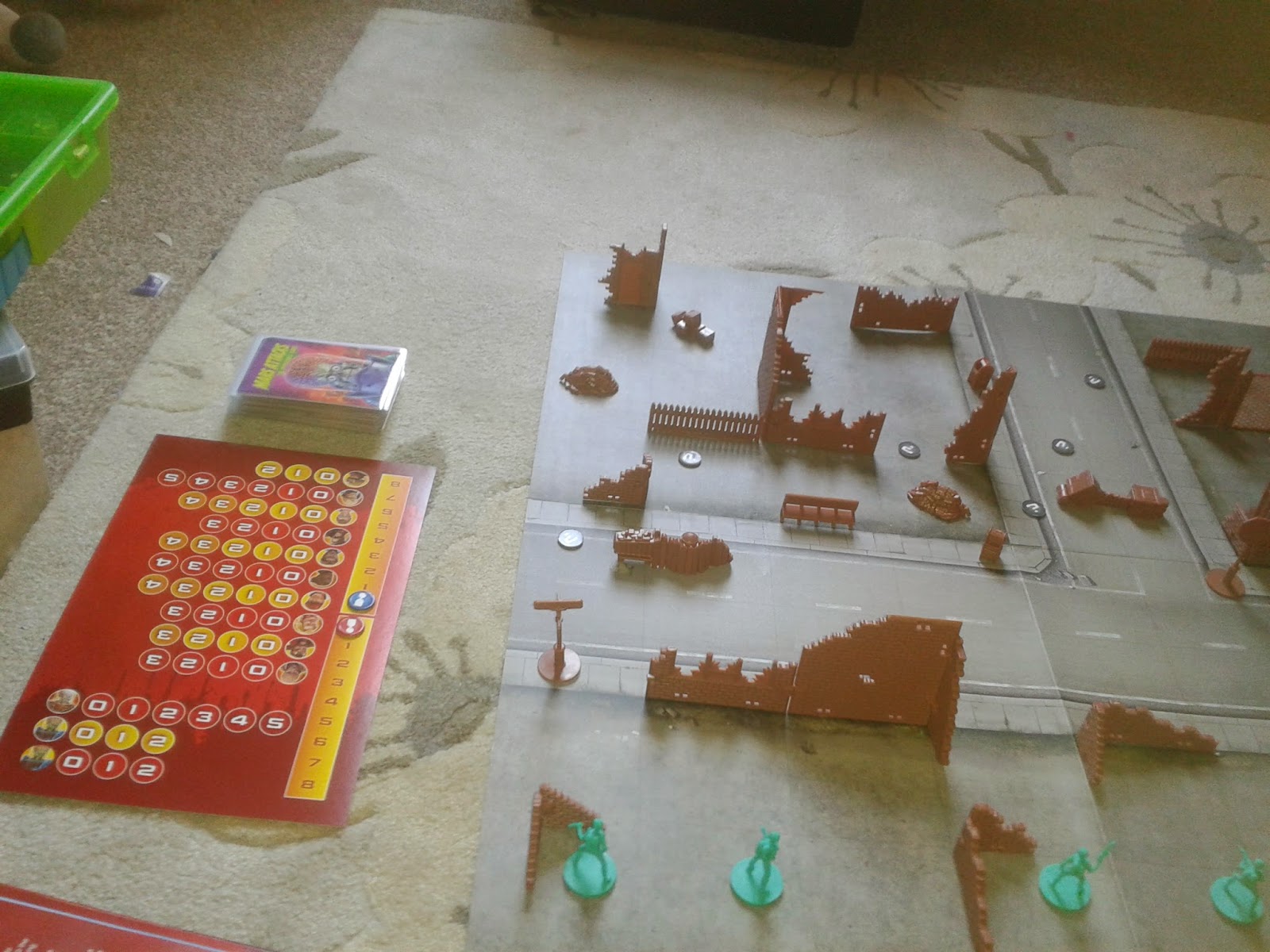 We prepared the victory tracker at zero, it is the first tor each 8 or the first to take all the enemy toys from the table that wins.  The scenario explains how you can get victory points.  I placed all the random critter/alien tech tokens on the table placed at random with dice rolls. 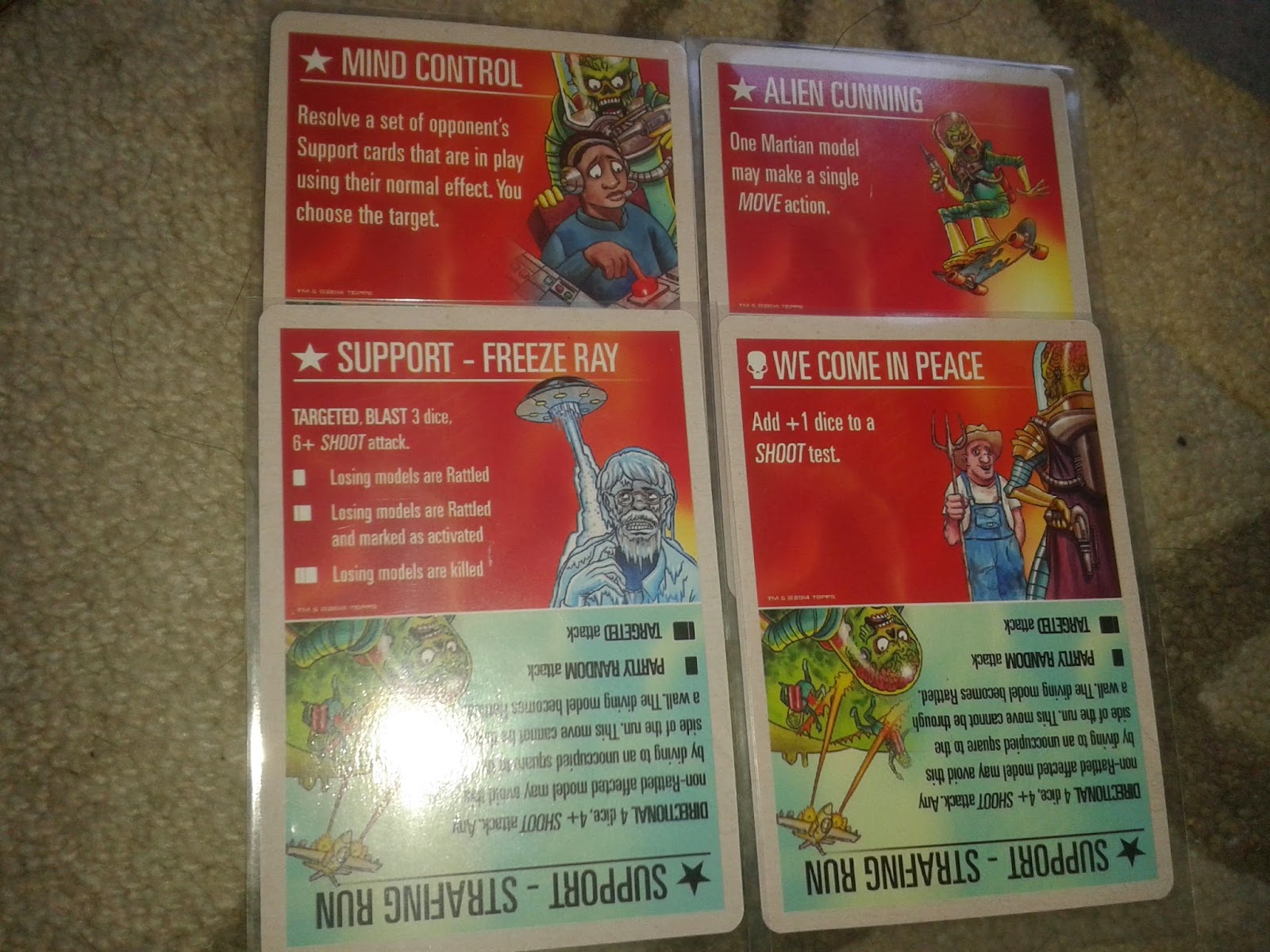 My starting hand of cards, I use the red sides as the Martian player 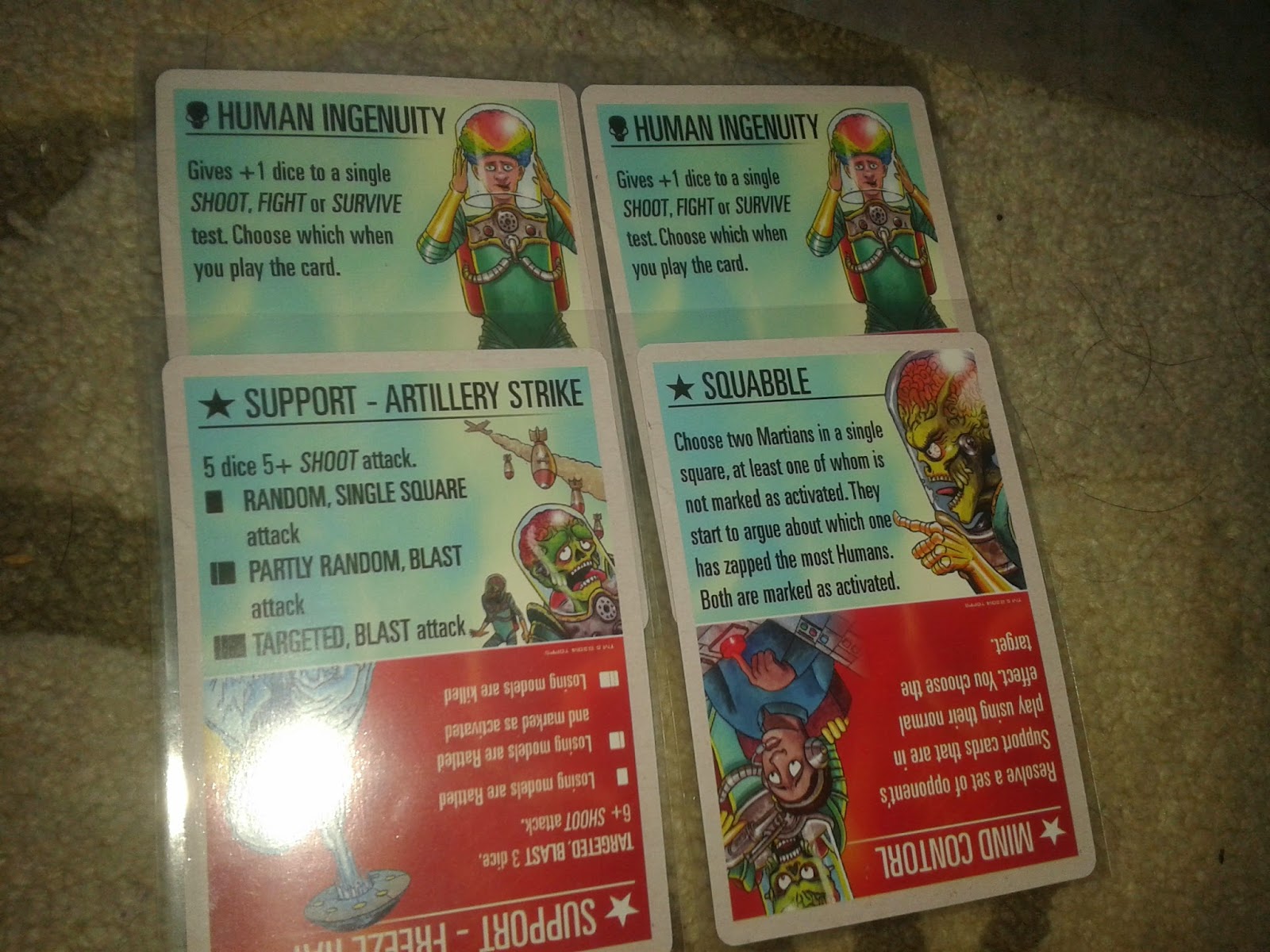 Olivias cards, she uses the blue sides as the human player. 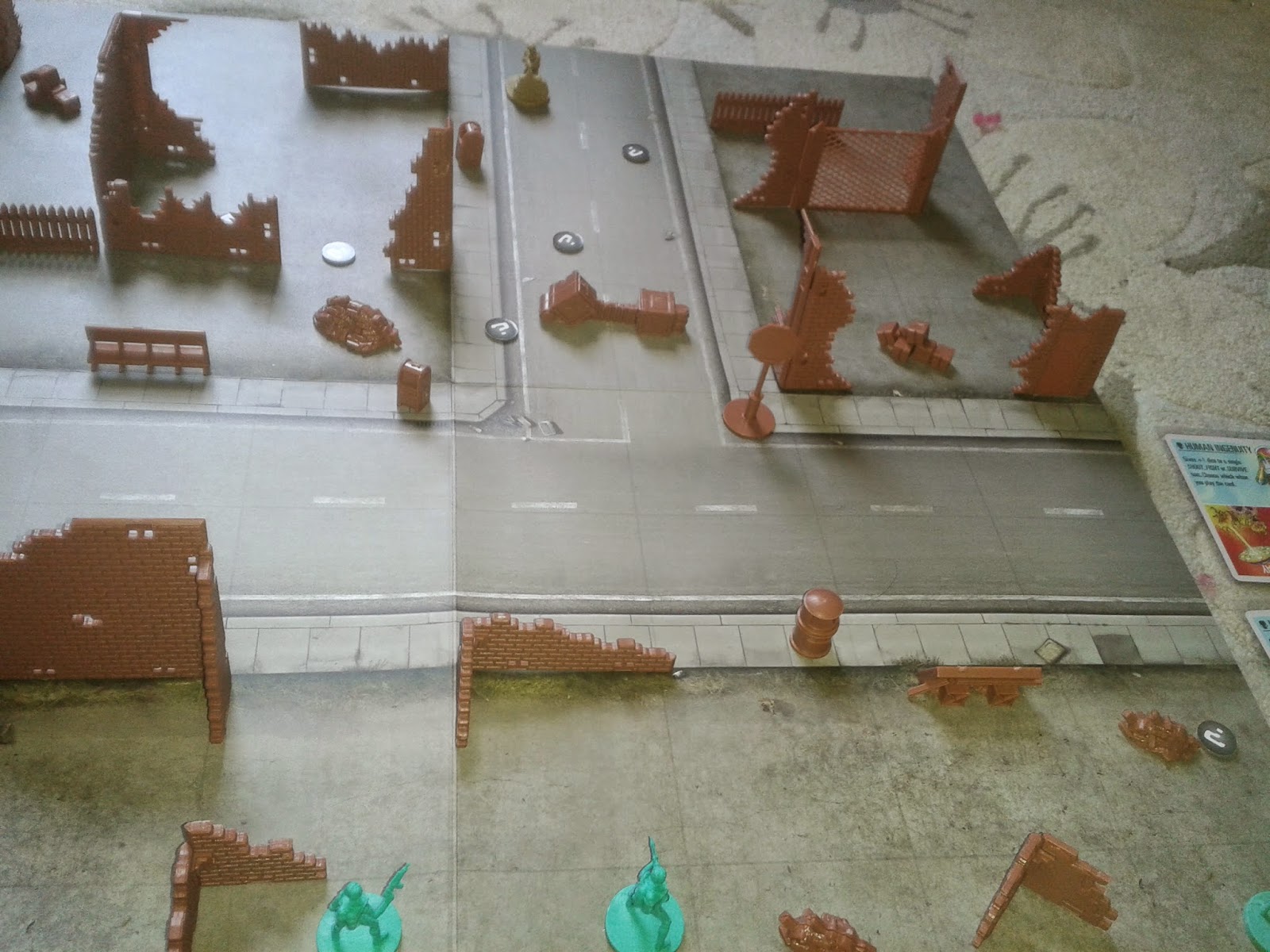 Olivias troops start off the table, she took first turn.  She moved her LMG trooper on and opened fire! she wanted to take first blood fast.  She rolled one hit but the Martian rolled and survived.  That was a wake up call.  For her second activation she moved her other LMG troop on.  With the long range of the LMG she opened up again playing the human ingenuity card to add another dice.  She rolled 4 dice, got two successes and the grunt got none at all so was disintegrated in a hail of fire.
Not a good start for the Martian forces, already outnumbered they where a man down, and the US forces where all out of range of the disrupter rifles. 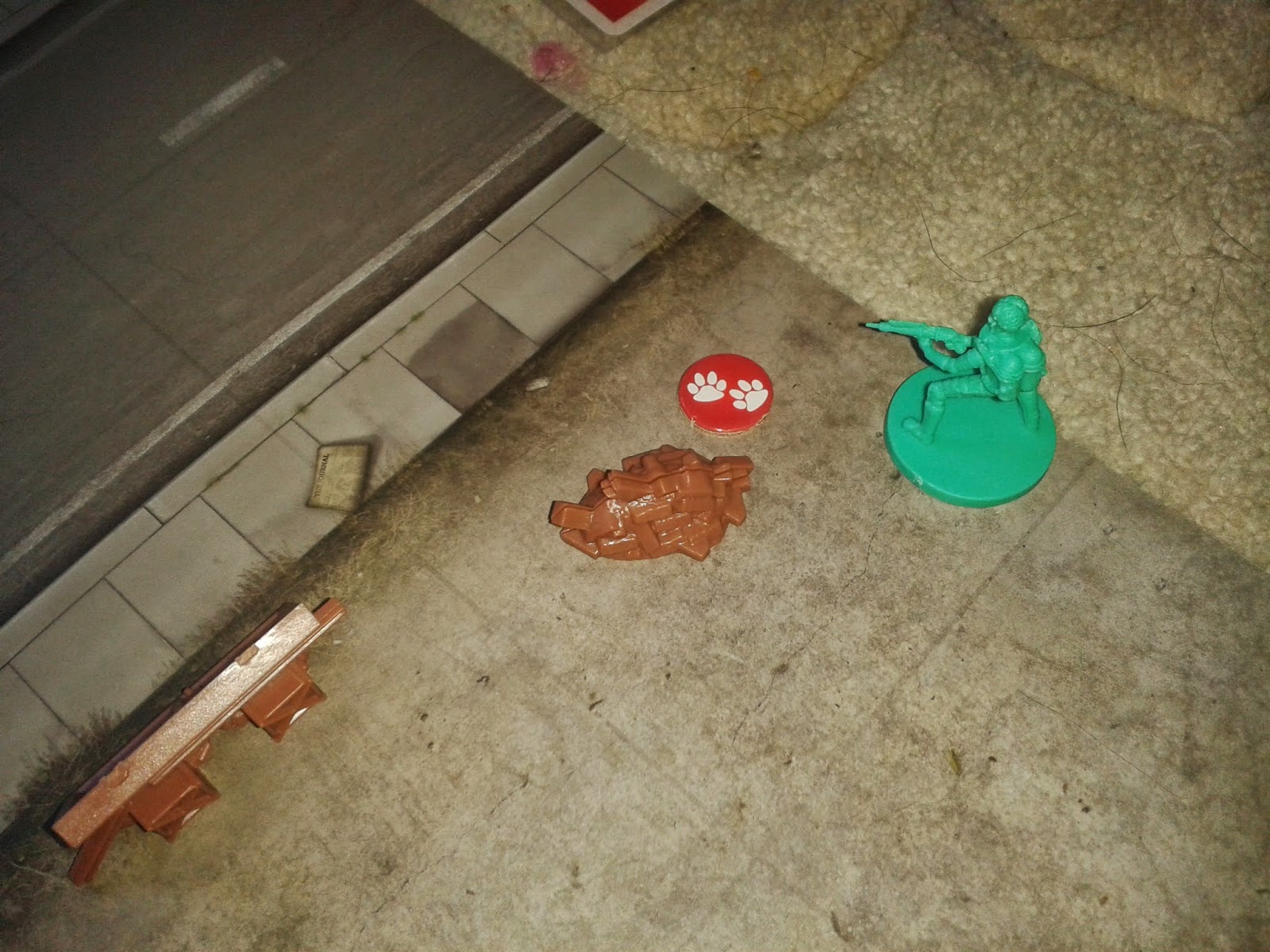 The Martians advanced, taking a critter token, good this can be tested in the labs the grunt thought! 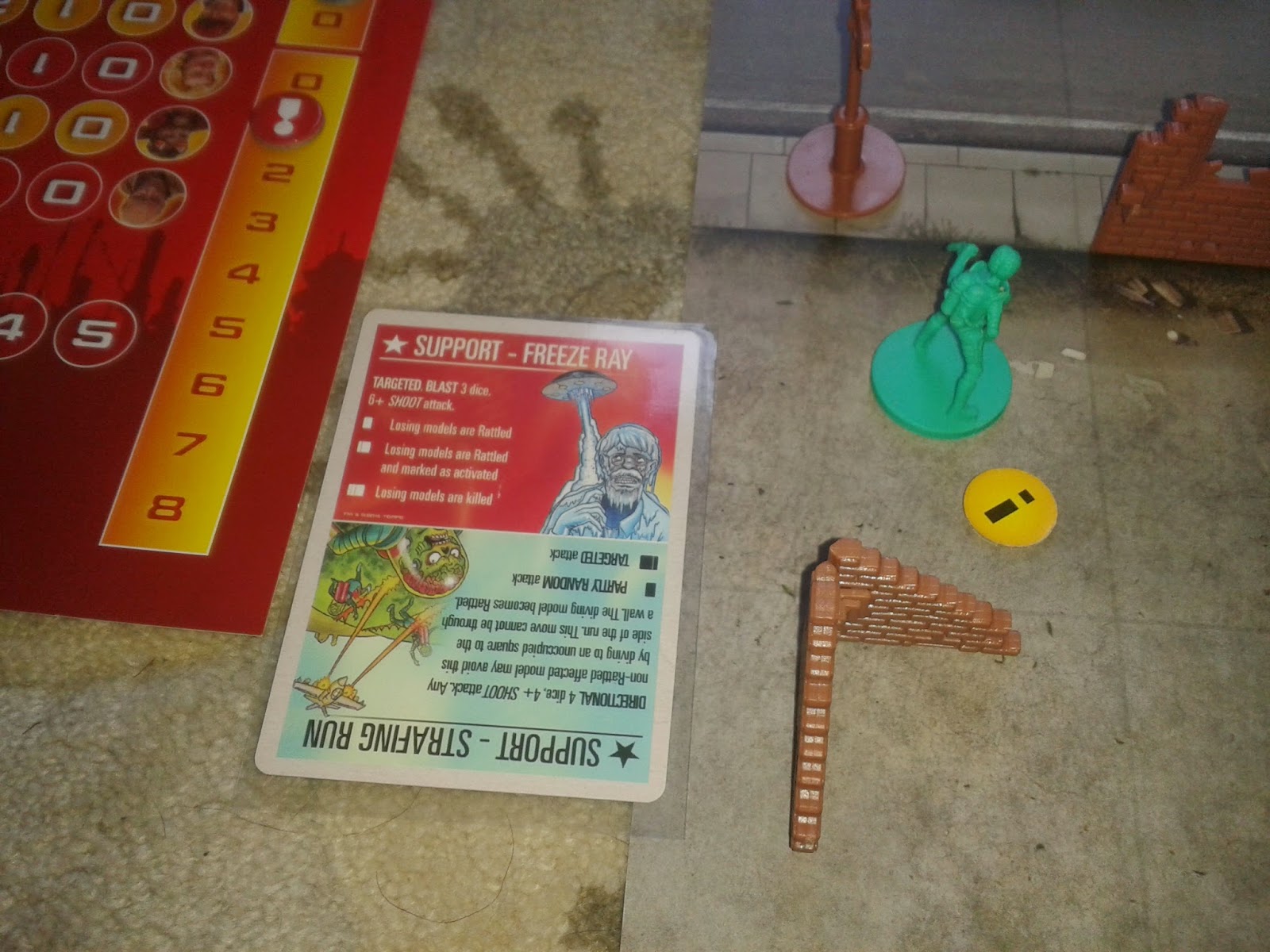 another Martian moved up and called in the Freeze Ray support card to play.  This sits ready to be unleashed when needed. 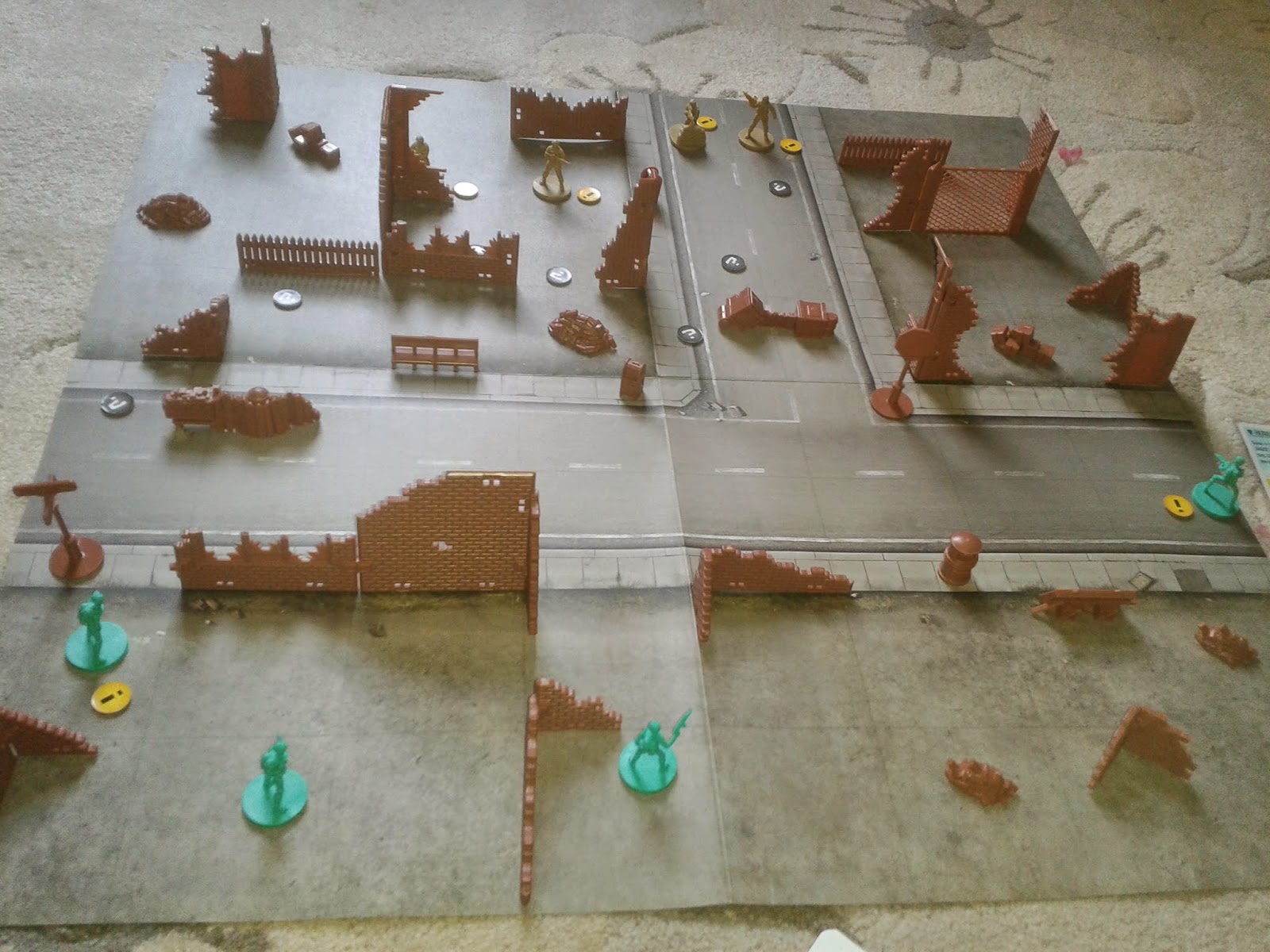 More troopers move on and up into cover, as the Martians move round the flanks to get in range.  They have to be careful as the Troopers weapons outrange them. 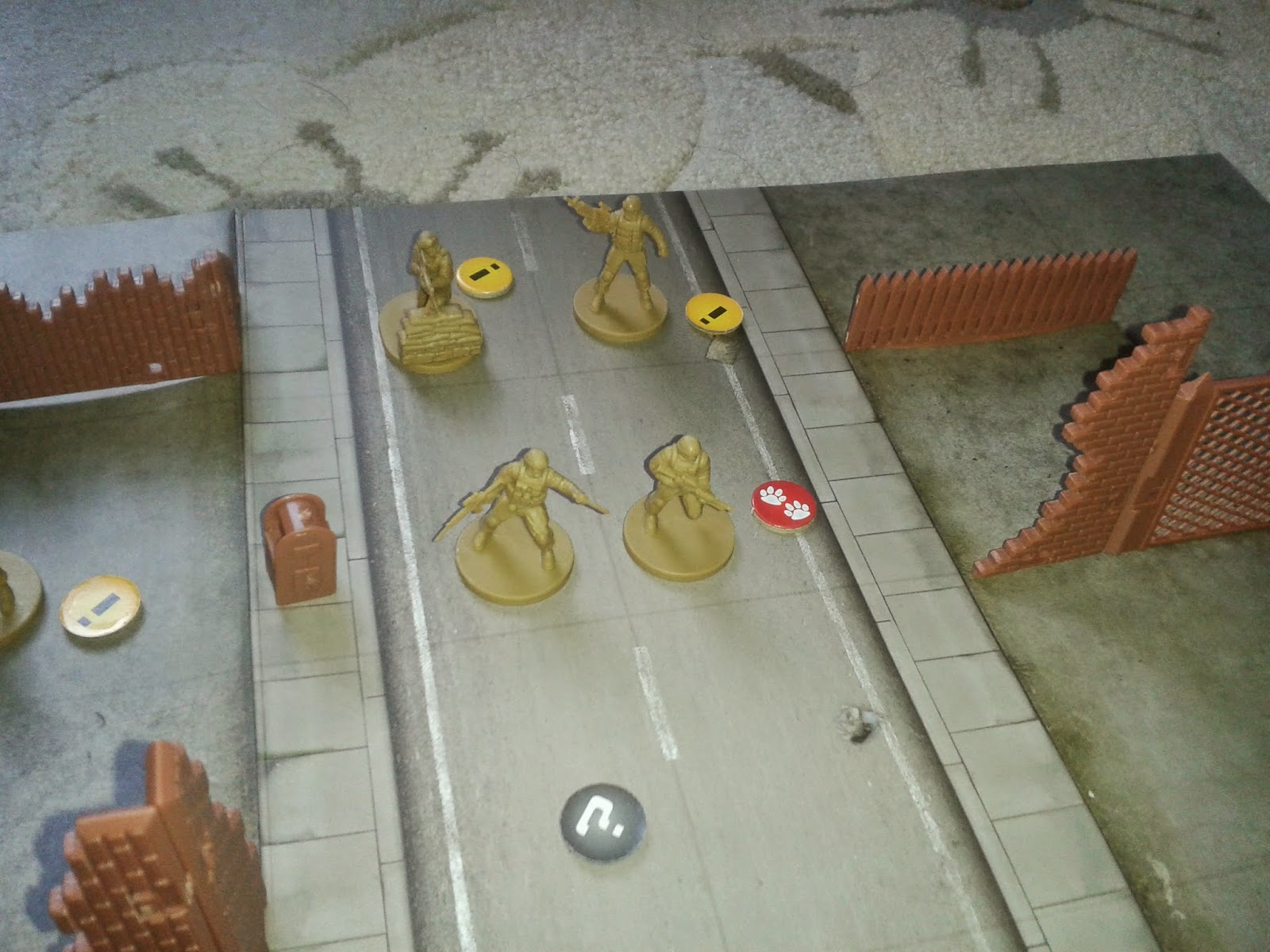 The LMGs rip fire at the Martians again, but lucky rolls and Martian armour save them. 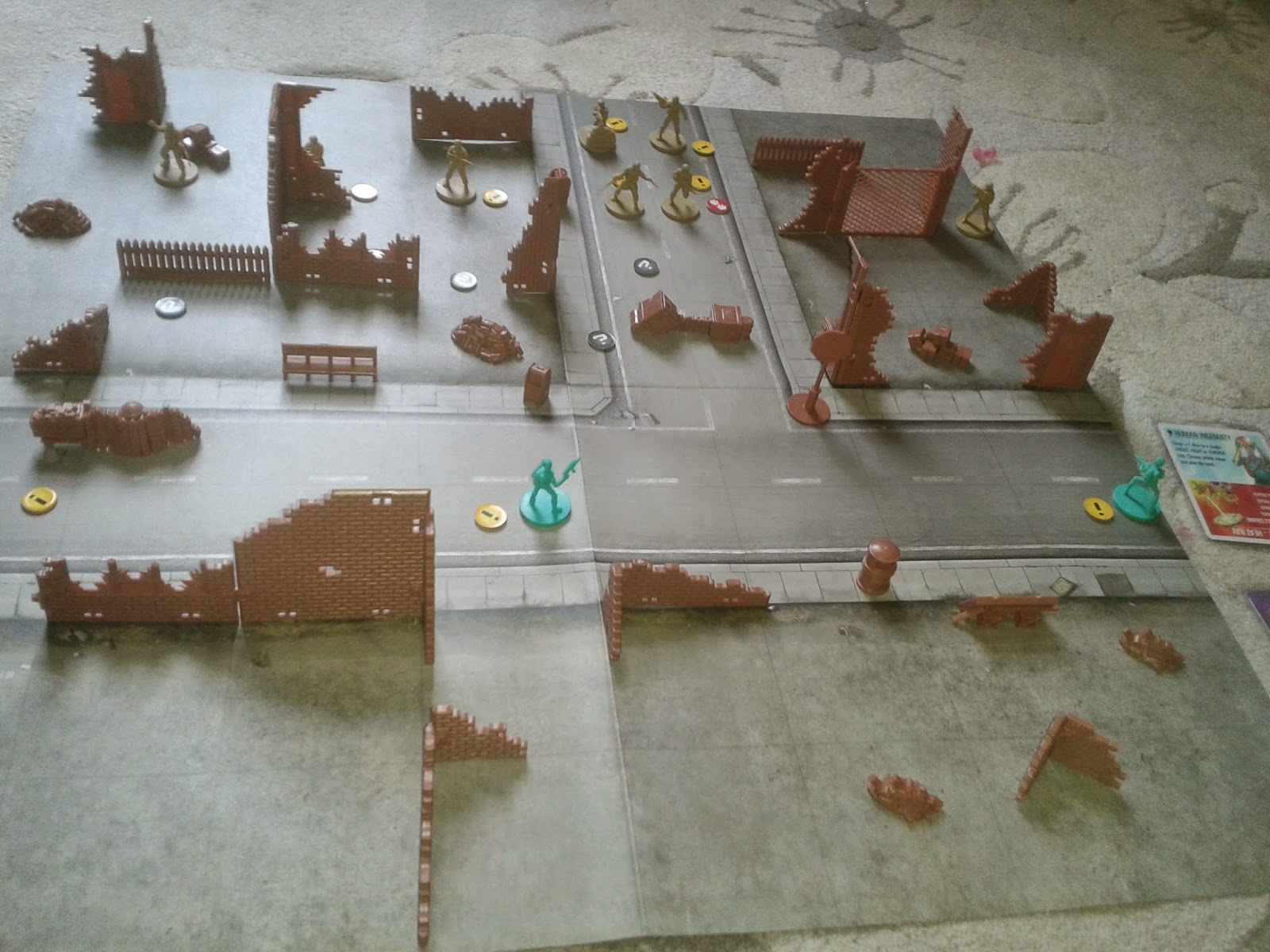 A Martian grunt leaves himself stupidly out in the open, that's an extra dice if he gets shot at! 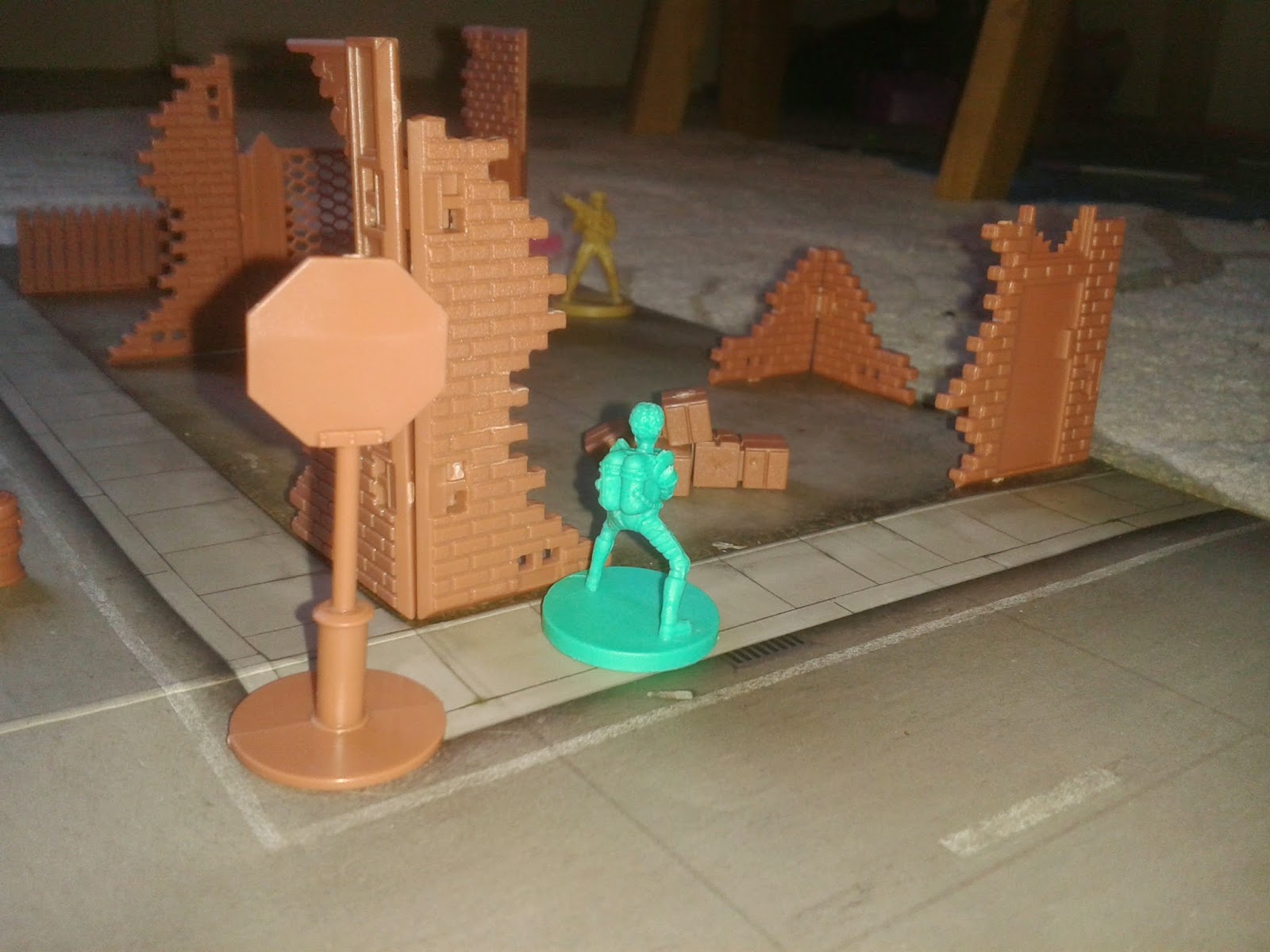 A Grunt moves around the corner, plays Martian Cunning for an extra dice and fires his disintegrator rifle at a hapless trooper.... after the rolls are done a pile of burning bones is all that's left! 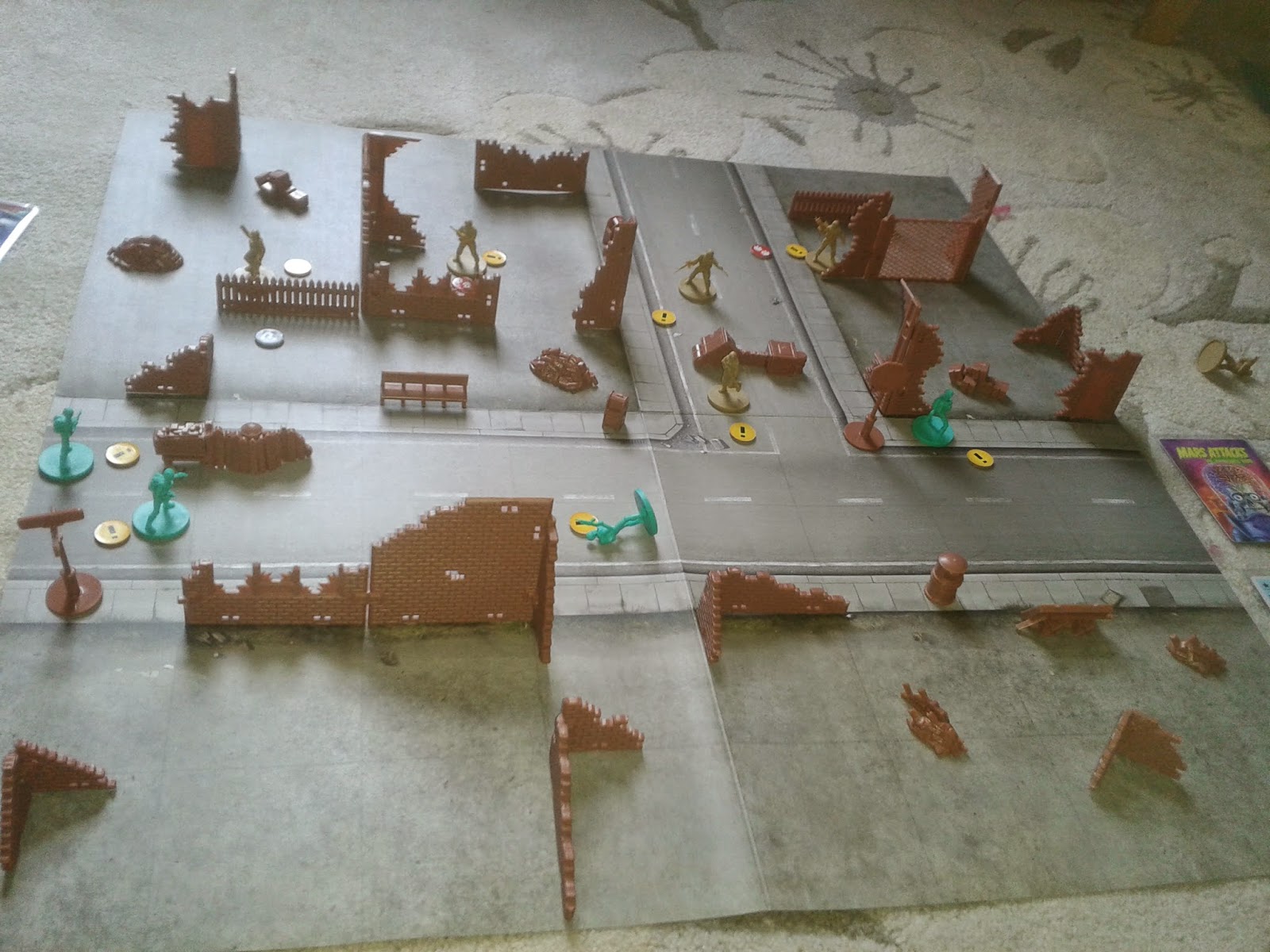 The Troopers move up pressuring the Martians, and fire and rattle a Martian, meaning he has to spend one of his two actions to stand up.
Things where looking good for the Human forces. Then when we drew our cards we each drew one of these!! and the giant bugs arrived! 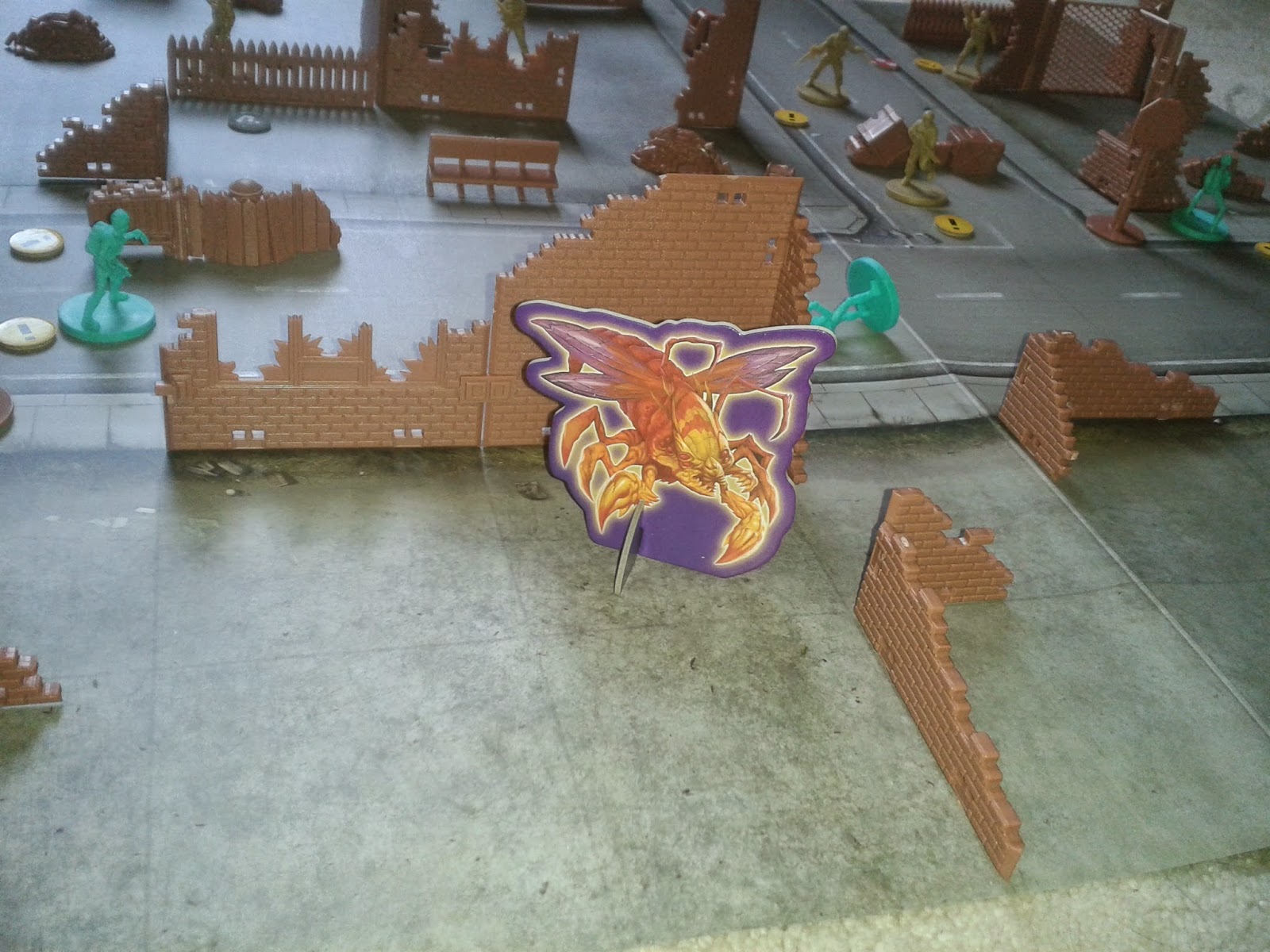 luckily enough the random rolls put themvout of harms way, for now, but each round they will roll for a random move again and come hunting! 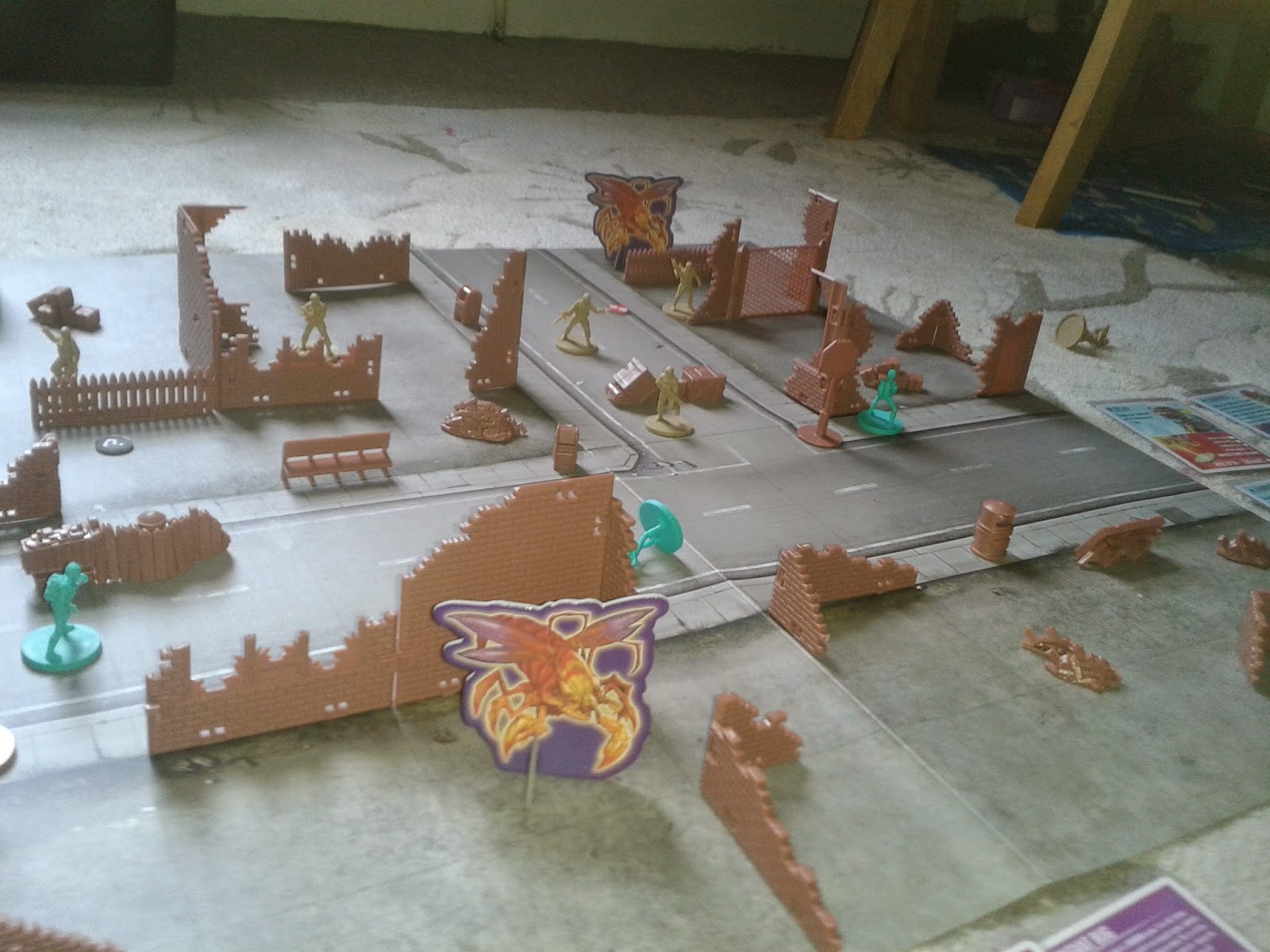 The Martians started to take it to close combat, a bit risky as the Troopers are a bit better, but with a bonus dice from a charge made the chance worth it, and smash the Martian took him down. 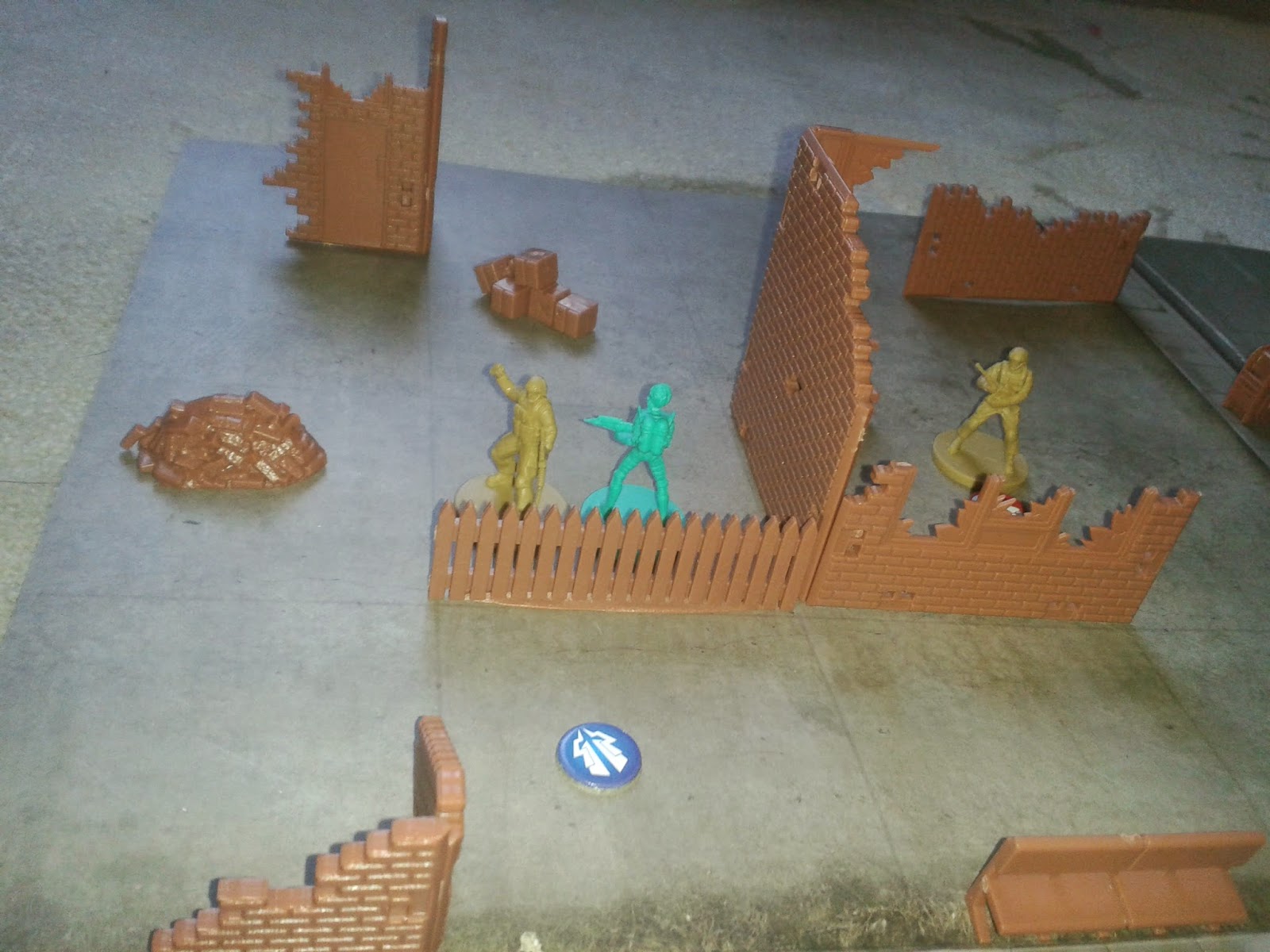 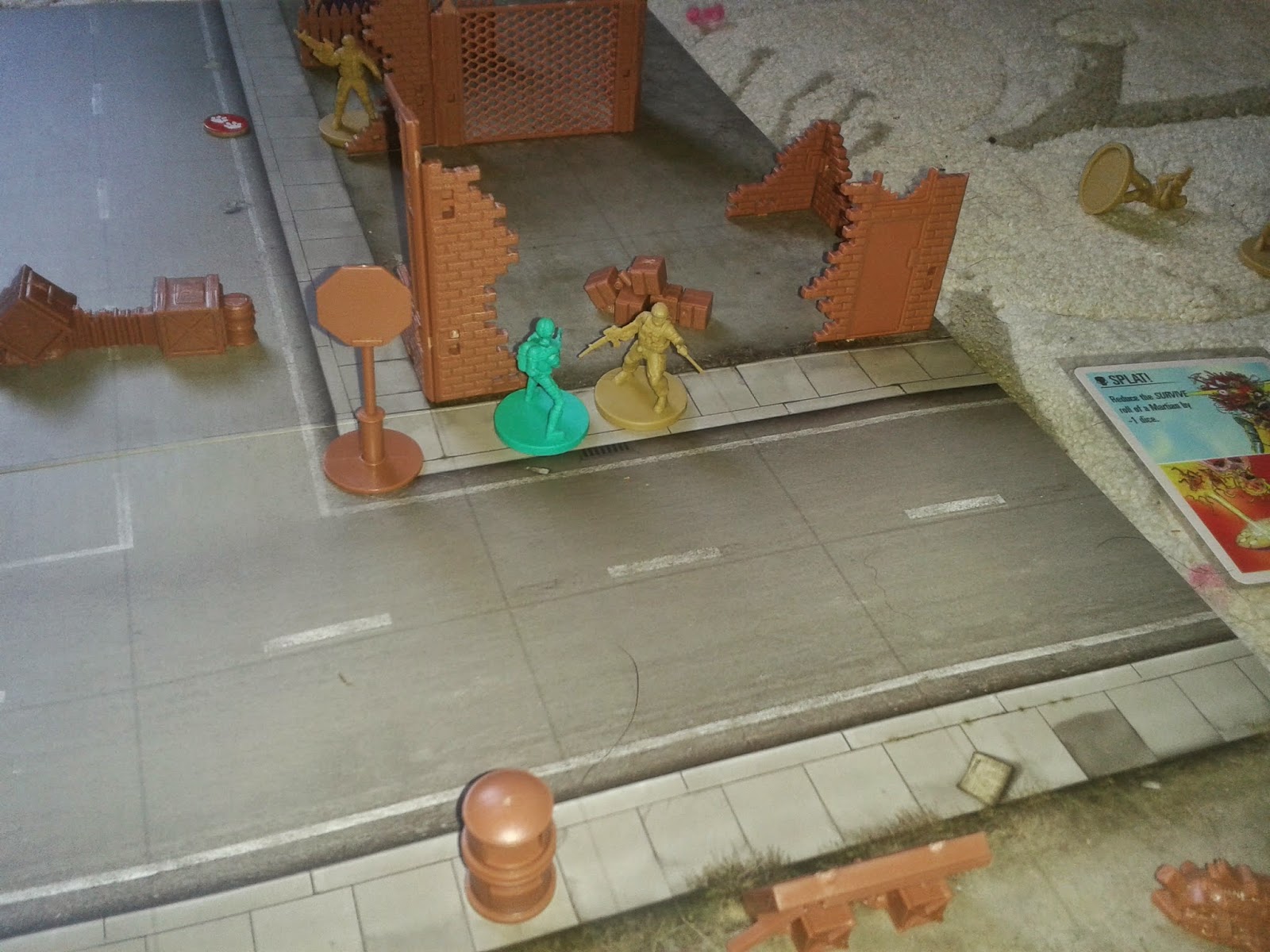 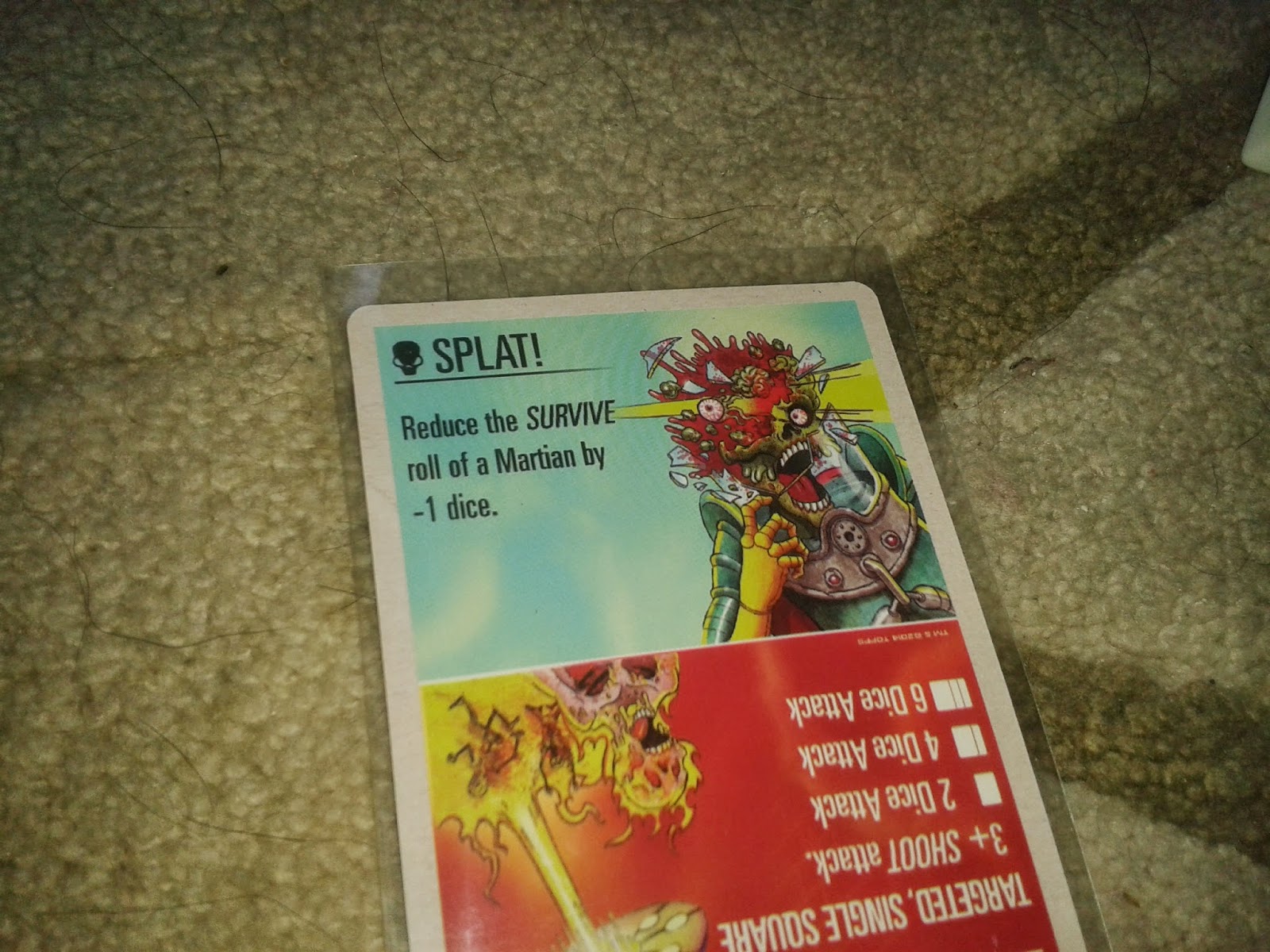 Fire was exchanged as the remaining troops maneuverer for position 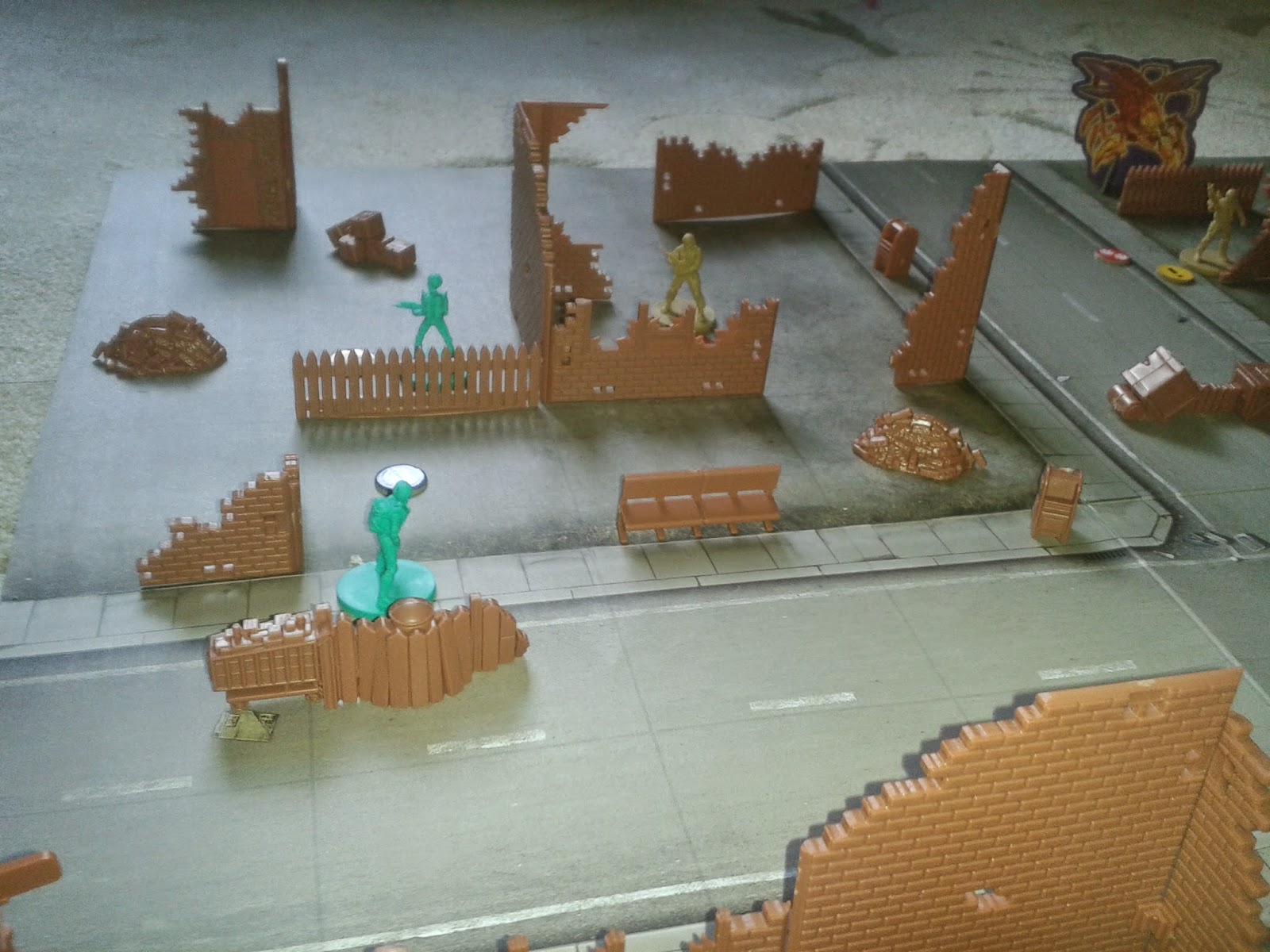 The Martians dodging fire, but another trooper feel to Martian fire. 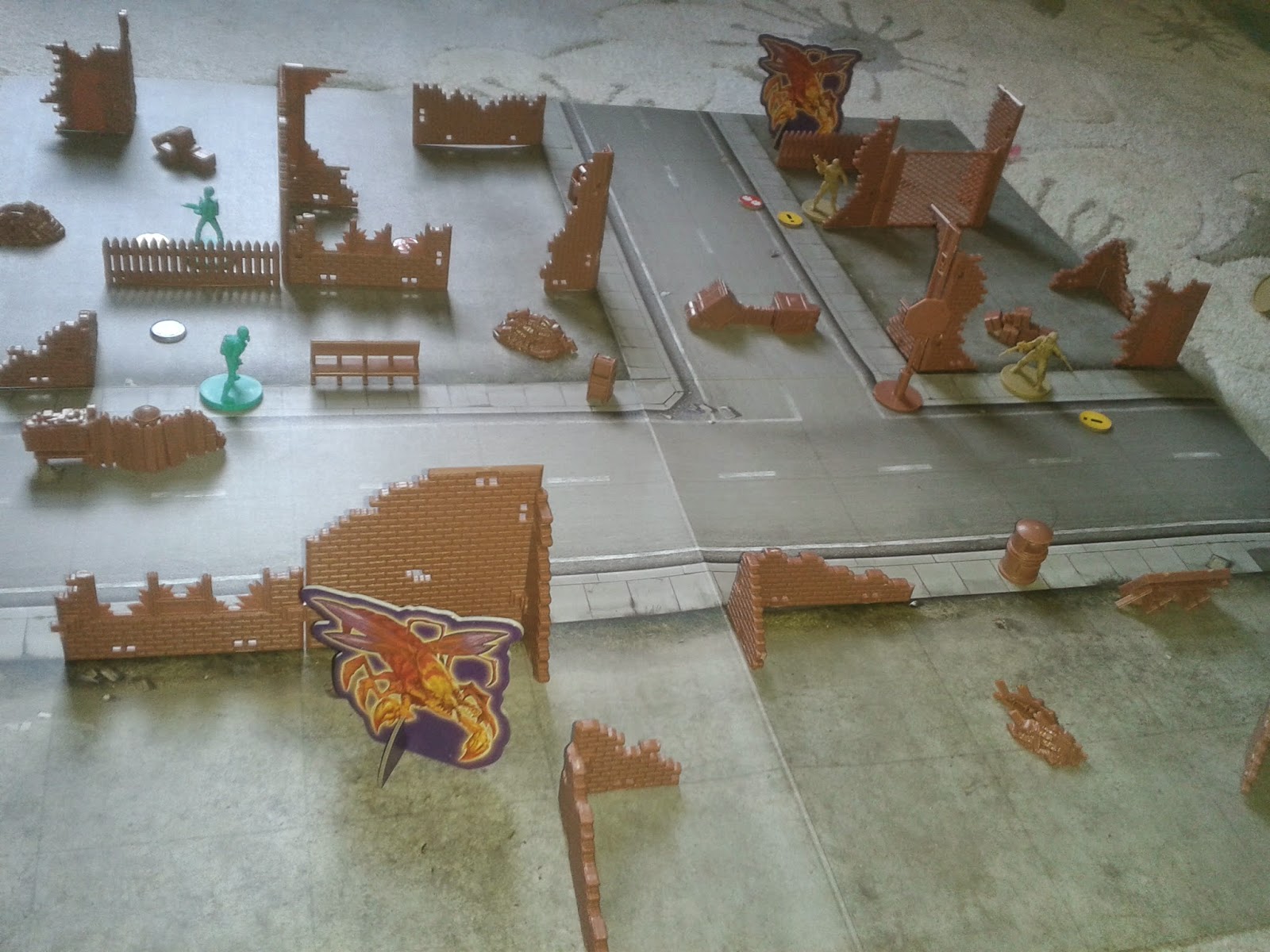 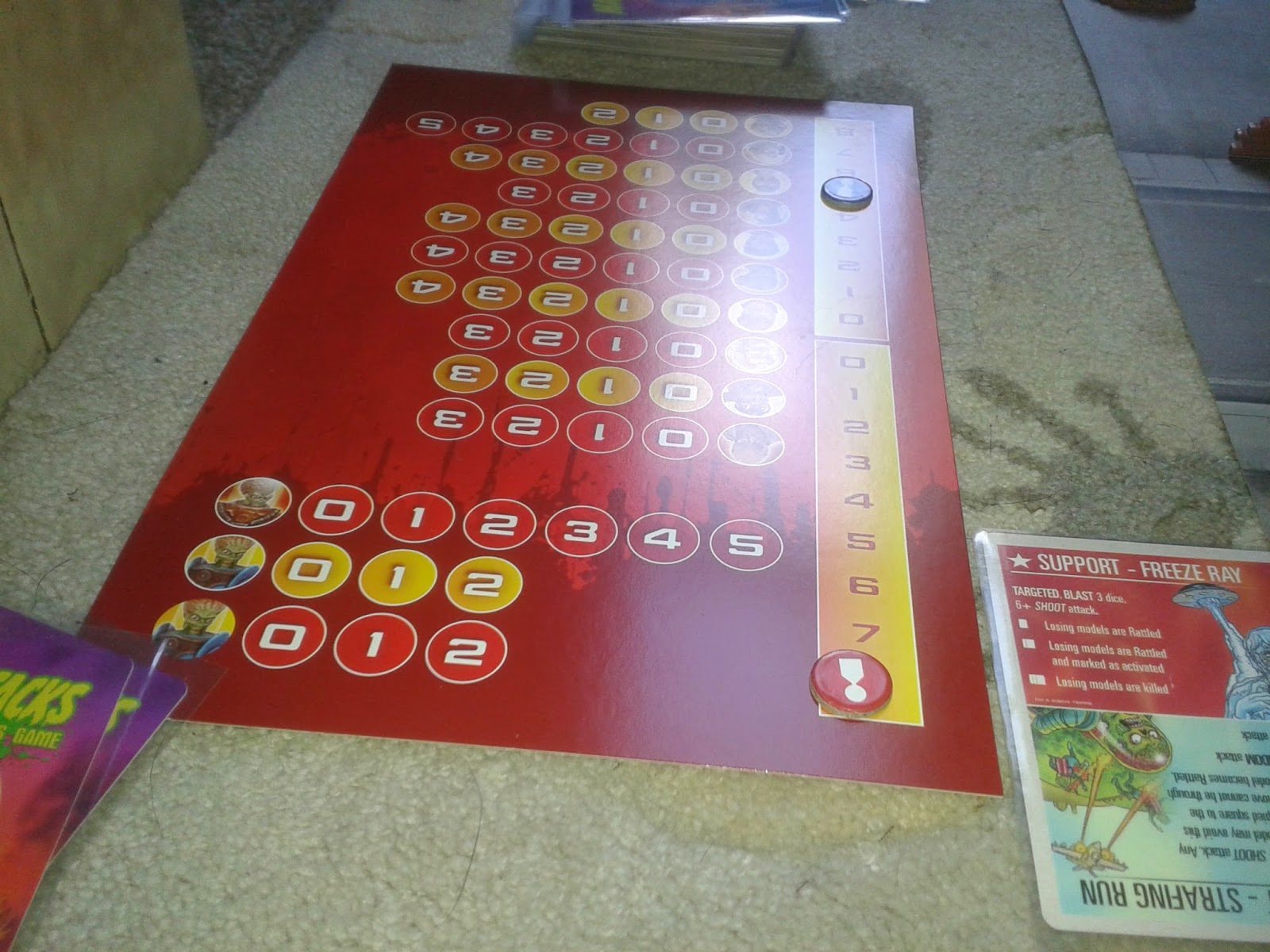 its a smooth game to play when you get used to the flow, and it ended up a 8-4 victory to the Martians, with all the tech and critter tokens grabbed.

I like how this brought it in slowly, getting used to the basics before the heroes come in.  I loved the random bugs element, great fun, and the cards provide some great options for tactical play.  We really enjoyed it, even though Olivia lost, which does not happen often and she really wants to play again.

Gunfire and ray blasts came through the radio system. Sergeant Olivia strained to hear what was going on... "I have one, enemy fragged", then "NOOO Ramirez is down.. he's just gone... a puddle what are they shooting at us!!???".  Hefting her rifle she wanted to go help but she had her orders, they would just have to get by.  The last thing she heard over the com system was a harsh ZAP a cackle and then "ACK ACK!" .  Sergeant Olivia would remember this, they would pay!


The door to the saucer control opened...... two grunts walked in carrying a cage full of specimens.  Mission completed, the humans provided little resistance, slight casualties could always be replaced.  The war was just beginning and Warlord Martin was confident of victory, the first blood was his, and the last blood will be his.