The Val Jean was a small raider-type craft operated by the Maquis during the early 2370s. The impulse engines of Val Jean were originally built in 2332.
In 2371, while under the command of Chakotay, the Val Jean was pursued by the Cardassian warship Vetar, Gul Evek's flagship. Chakotay ordered the ship into the Badlands to try to escape the Cardassians. 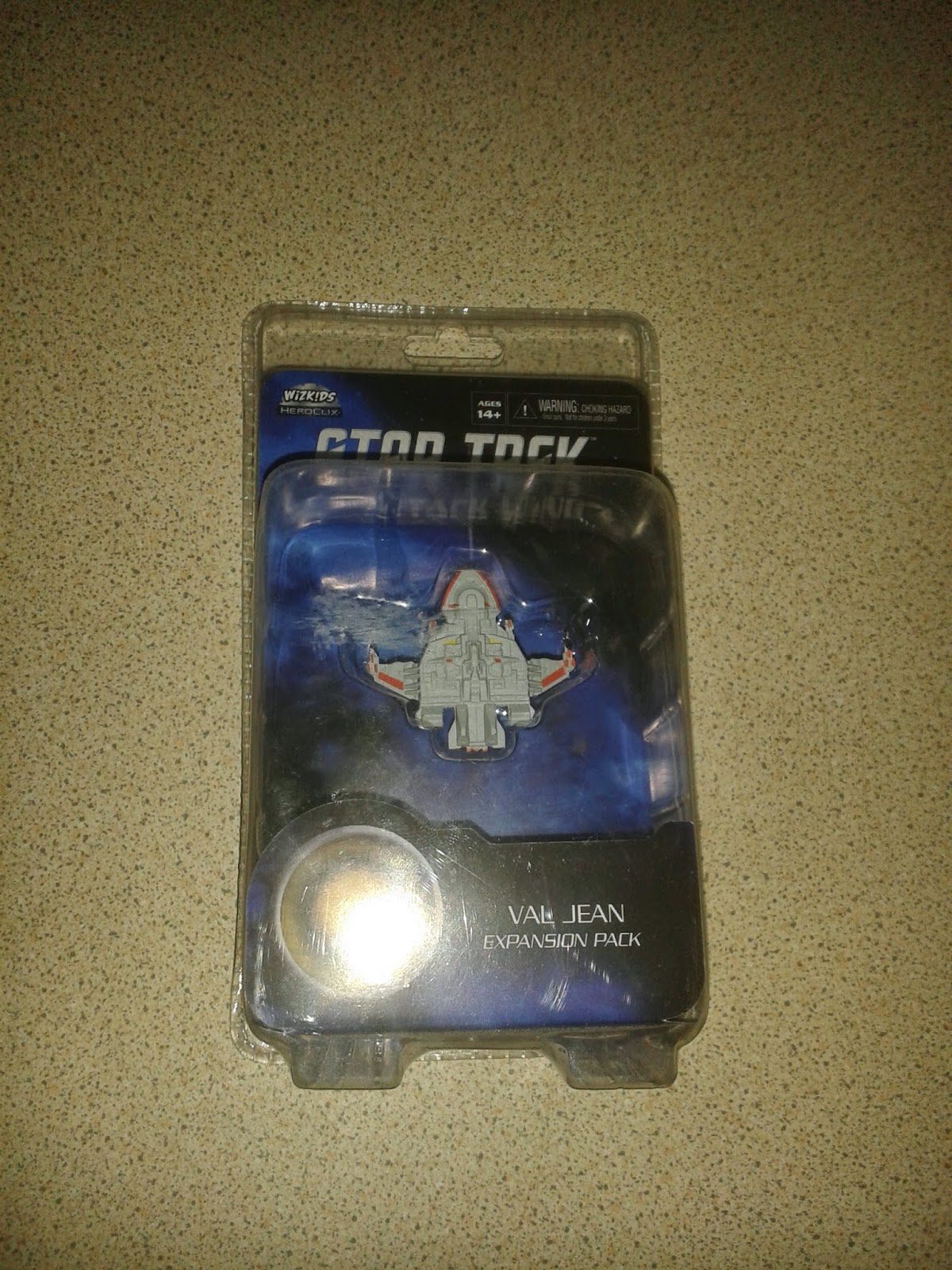 After eluding pursuit, the Val Jean was scanned by a coherent tetryon beam and transported into the Delta Quadrant by the Caretaker. Once there, the crew was abducted and subjected to medical tests to determine their biological compatibility with the Caretaker. One of the crew, chief engineer B'Elanna Torres, was removed from the others and sent to the surface of the Ocampa homeworld.
In order to recover his missing crew member, Chakotay reluctantly joined forces with Starfleet captain Kathryn Janeway of the USS Voyager, who had been sent to capture him but had instead been pulled into the Delta Quadrant as well. The cooperation proved successful, and both Torres and Voyager crew member Harry Kim were rescued.
Subsequently, both Voyager and the Val Jean were .........

engaged in a dogfight by a small fleet of Kazon-Ogla warships, including a massive Kazon carrier vessel. Because the Kazon vastly outgunned both Voyager and the Val Jean, Chakotay chose to perform a ramming maneuver to destroy the much larger ship and "take some heat off [Voyager's] tail." The ramming was successful; the carrier was destroyed after colliding with the Caretaker's array, and Chakotay was beamed out of the cockpit in the nick of time.
Following the destruction of their ship, the Maquis crew were accepted as members of the Voyager crew and given temporary Starfleet commissions. Although they came from hostile backgrounds, the two crews would have to work together to survive in the Delta Quadrant and return home to Earth.

So lets see what comes in the pack, as always there are the pack of card tokens 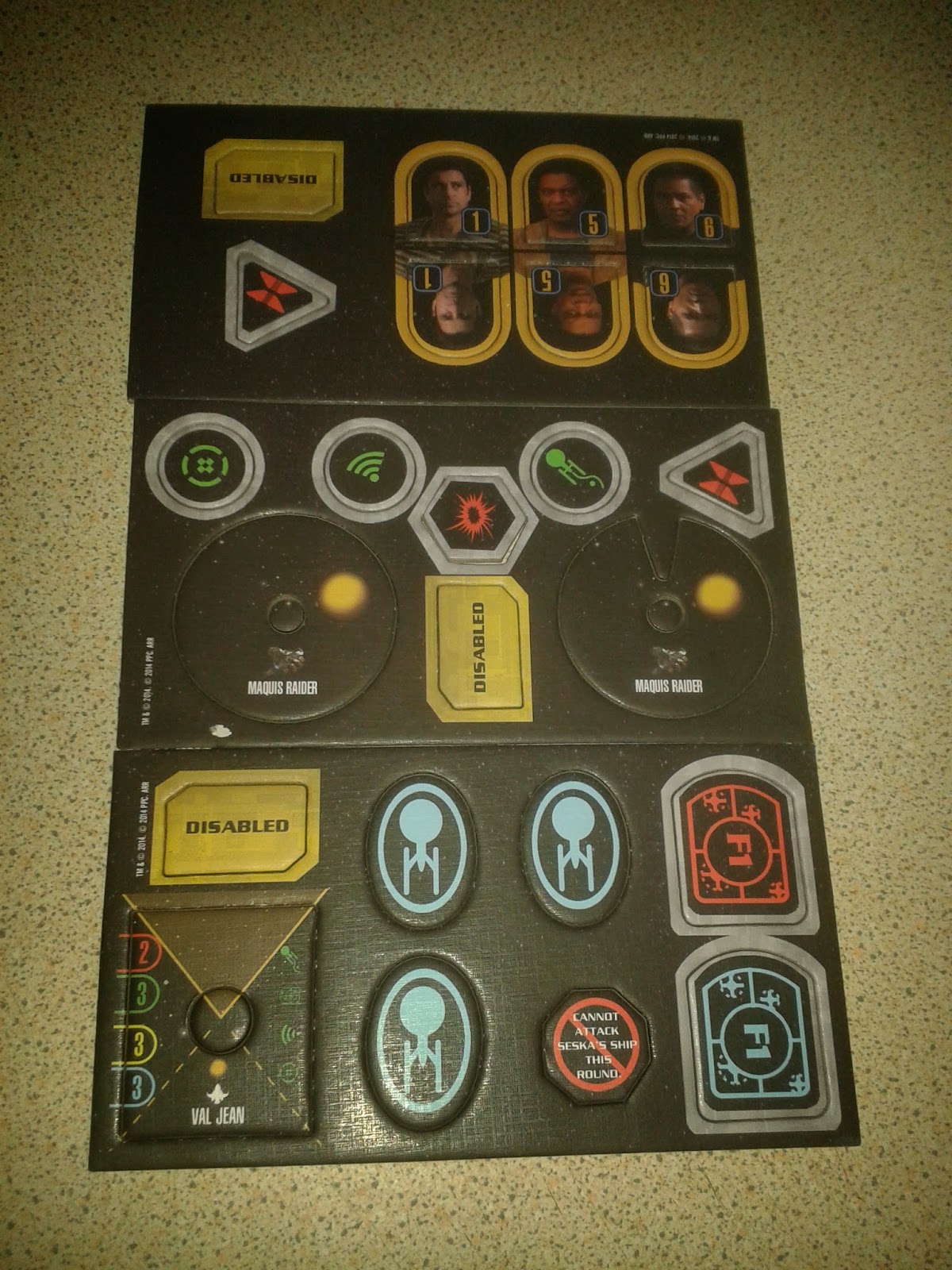 The Val Jean has a front and rear article which is always handy. 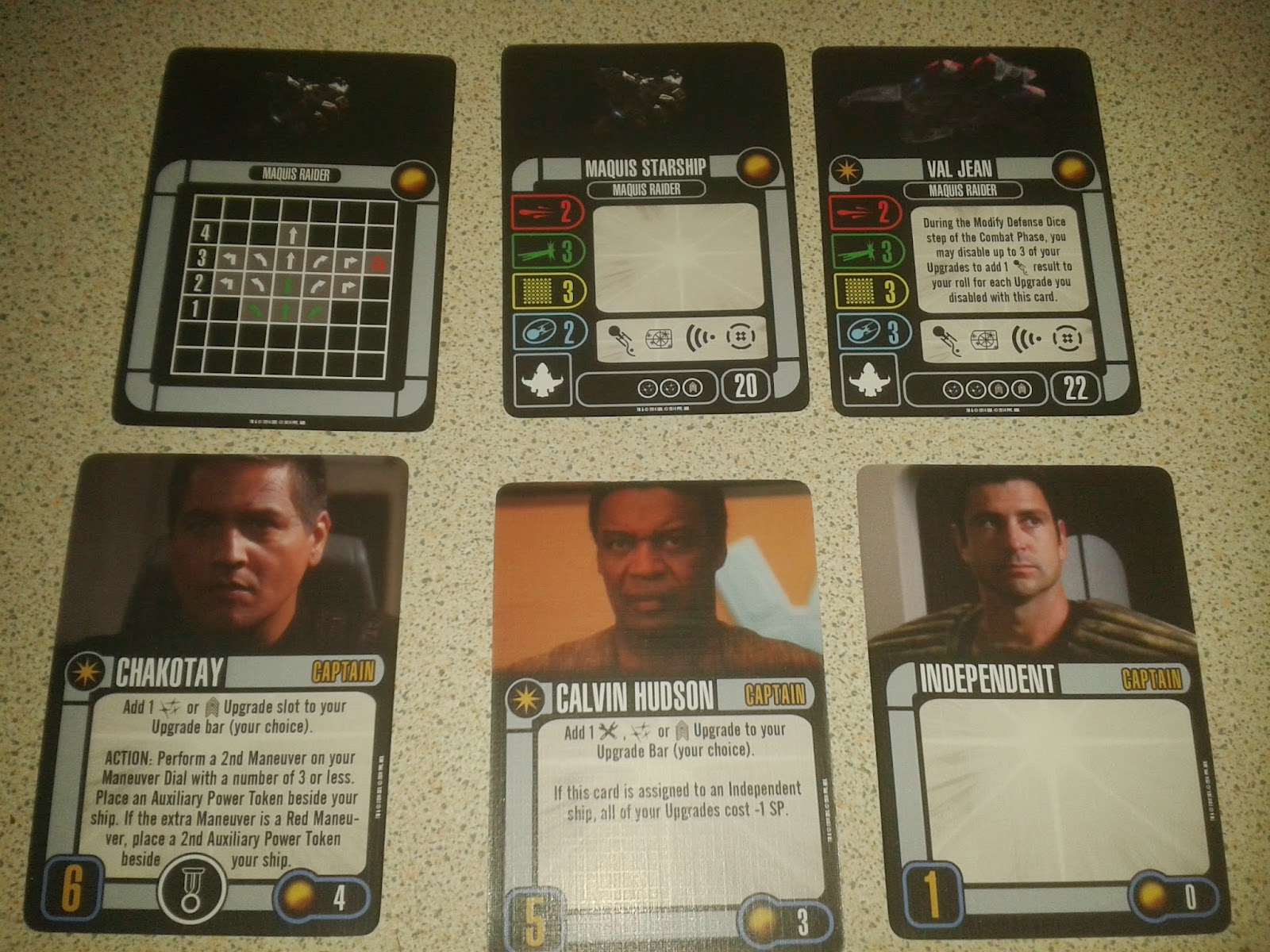 The Val Jean is a nimble ship, with only one red manoeuvre on the dial and that is a come about.  It is agile, but does not have that much firepower,  The named version has an ability to make it hard to it, you can disable up to 3 upgrades to add that many evade tokens to your roll, making this really hard to hit.
For captains we have the standard free captain, then Chakotay.  He adds a weapon on crew upgrade to you bar, and allows you to perform a second manoeuvre of 3 of less for the cost of an auxiliary token, making this ship even more nimble. Calvin Hudson a Starfleet turncoat adds a tech weapon or cres, and all upgrades for his ship are minus point.  He is good to save you some points. 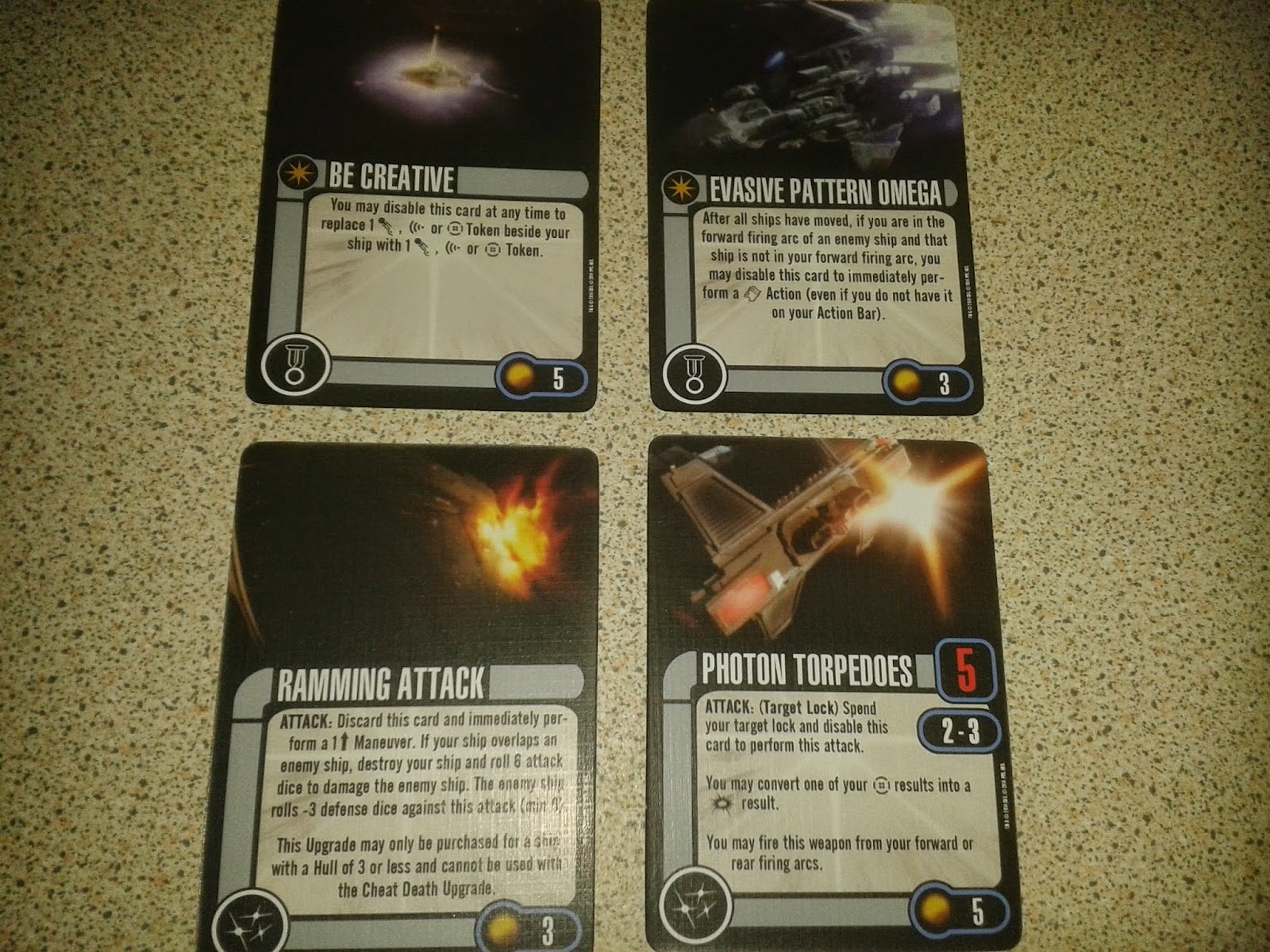 We have 2 elite talents, be creative which allows you to swap out one of your tokens for another one if you need that evadeto defend.  Or evasive pattern omega which for a disable allows you to sensor echo.
Weapon wise we have photon torpedoes which add some much needed punch to this ship, and ramming attack which is a suicide attack, handy if your low on hull and going to blow up. 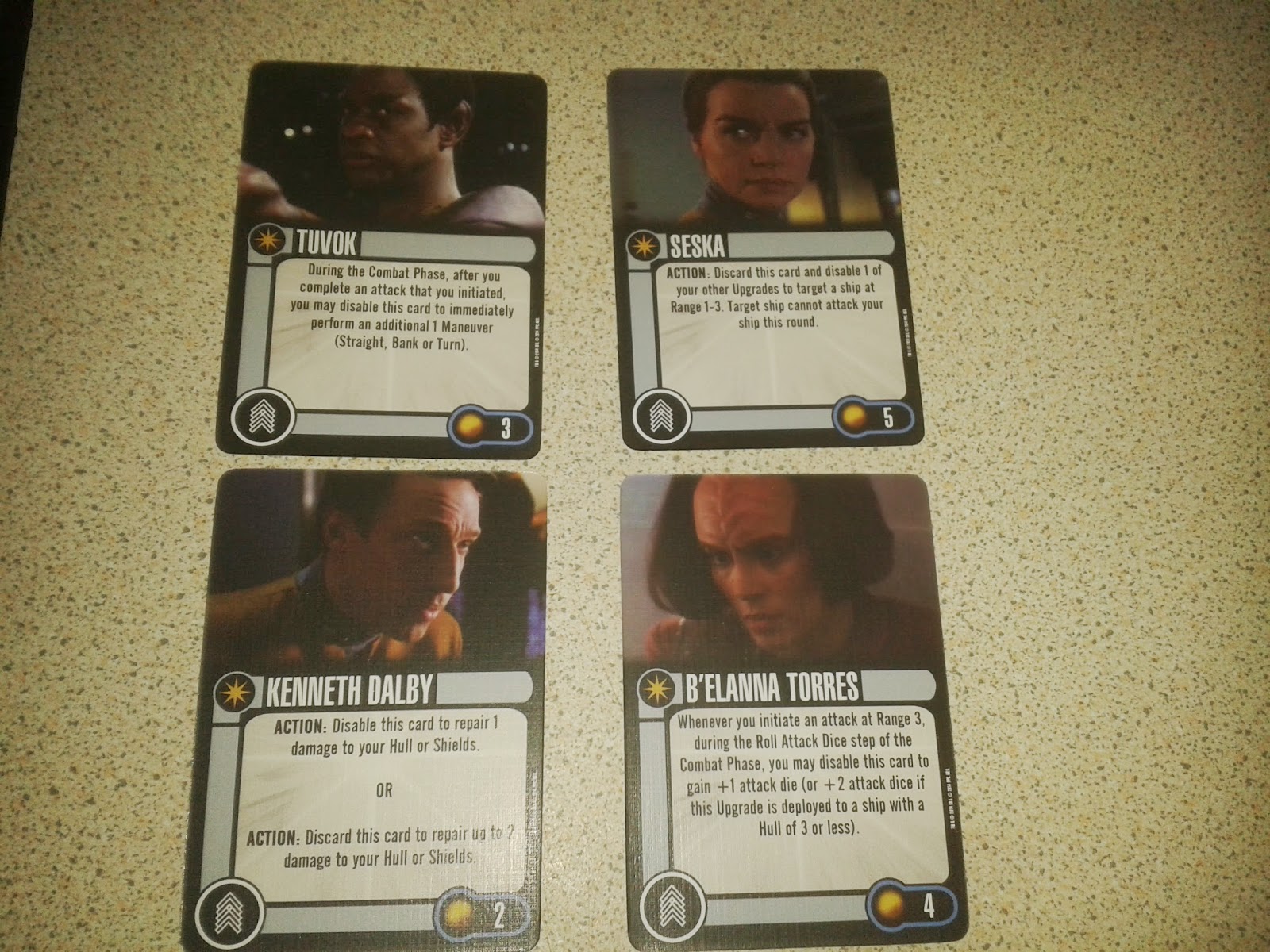 For crew we have Tuvok who allows you to take another manoeuvre after combat adding to this ships nimble ness and combined with Chakotay you can really shift around.  Seska is a discard for an action but the target ship can not attack you, so handy to survive that round to reposition.  Dalby allows you to repair hull or shields as an action or a discard for more effect.  Torres adds to long range firepower. 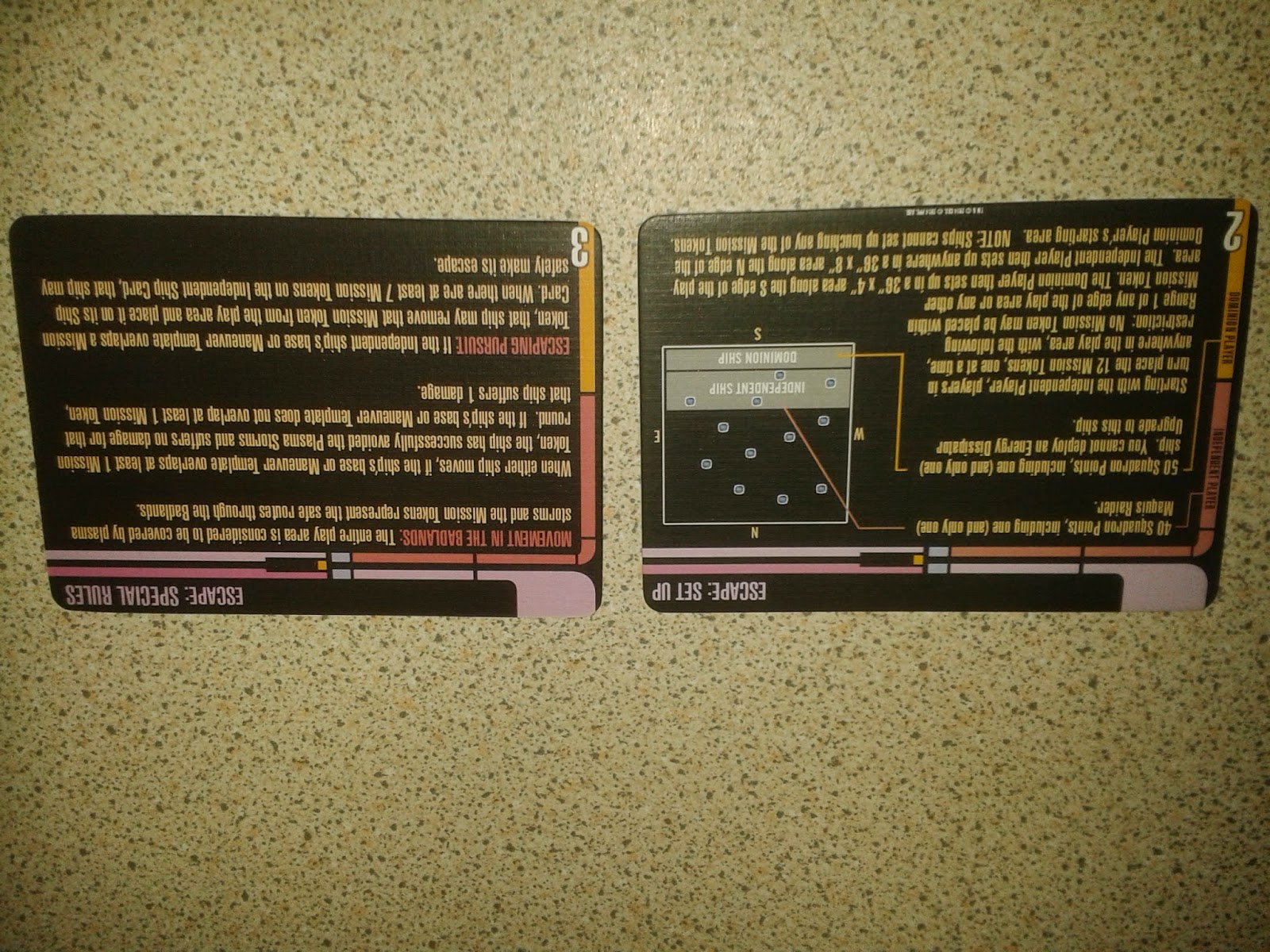 The mission is Escape which looks quite a challenge to try!
Now for the ship itself 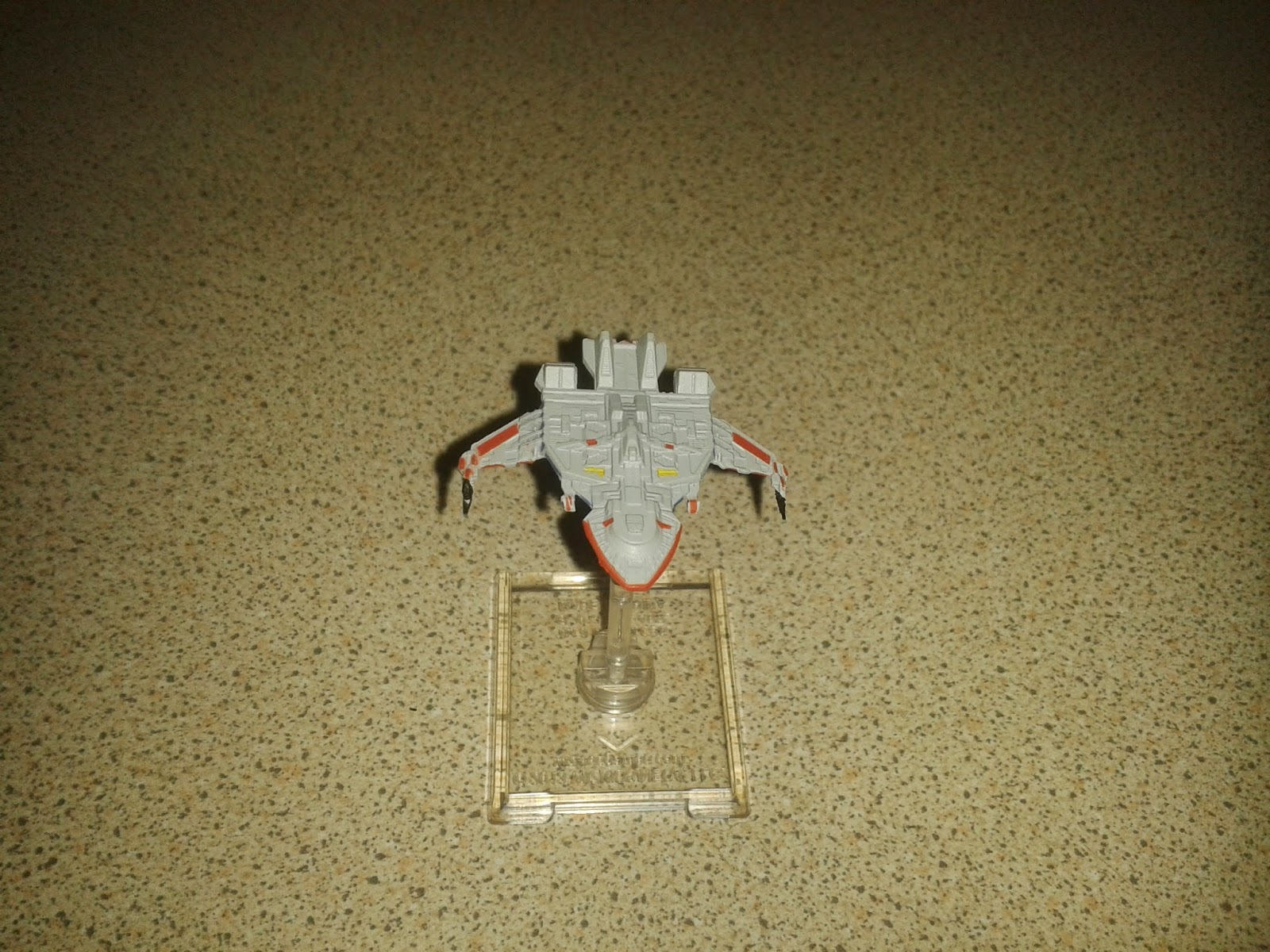 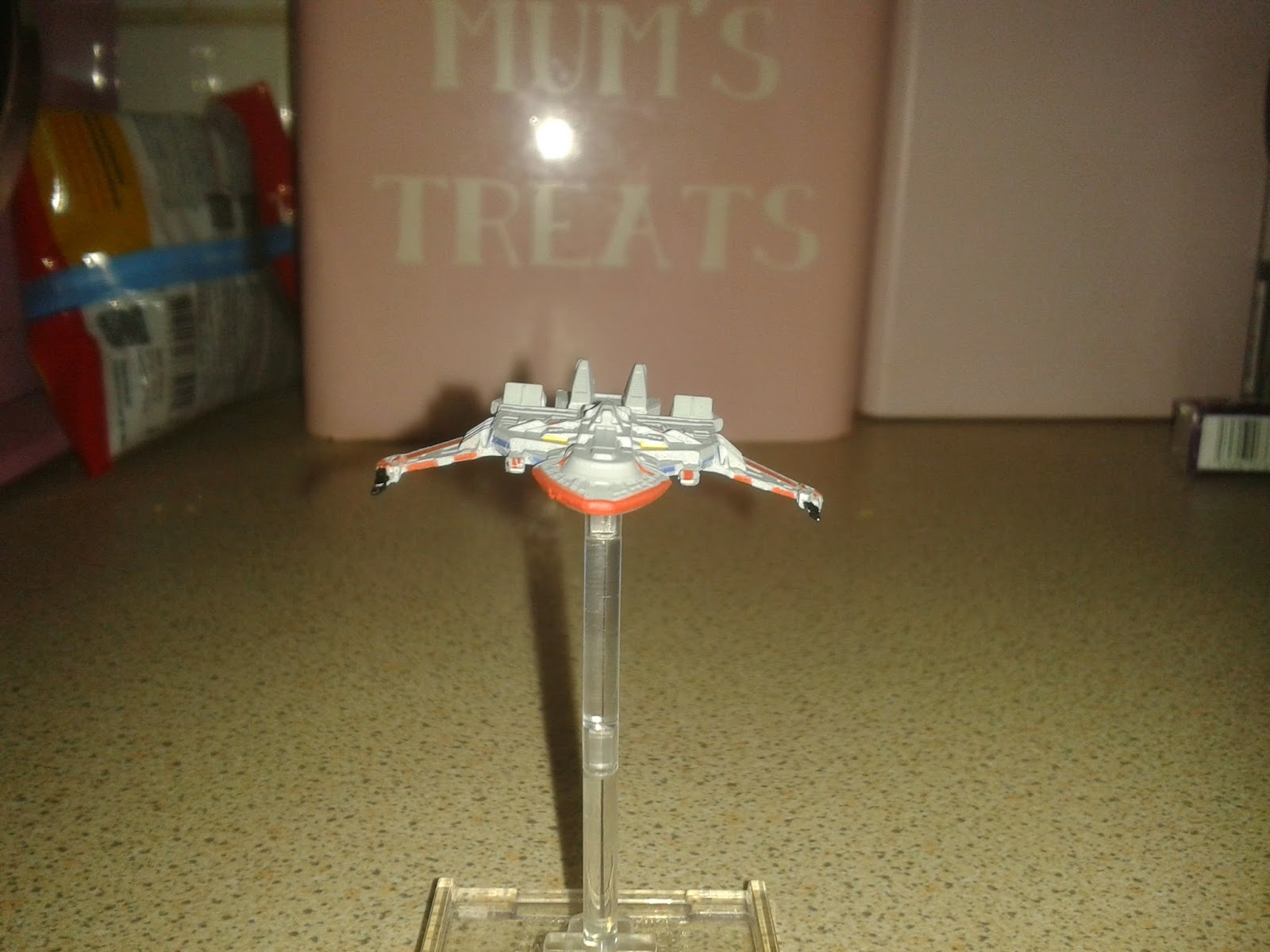 a wash on this will make it look great 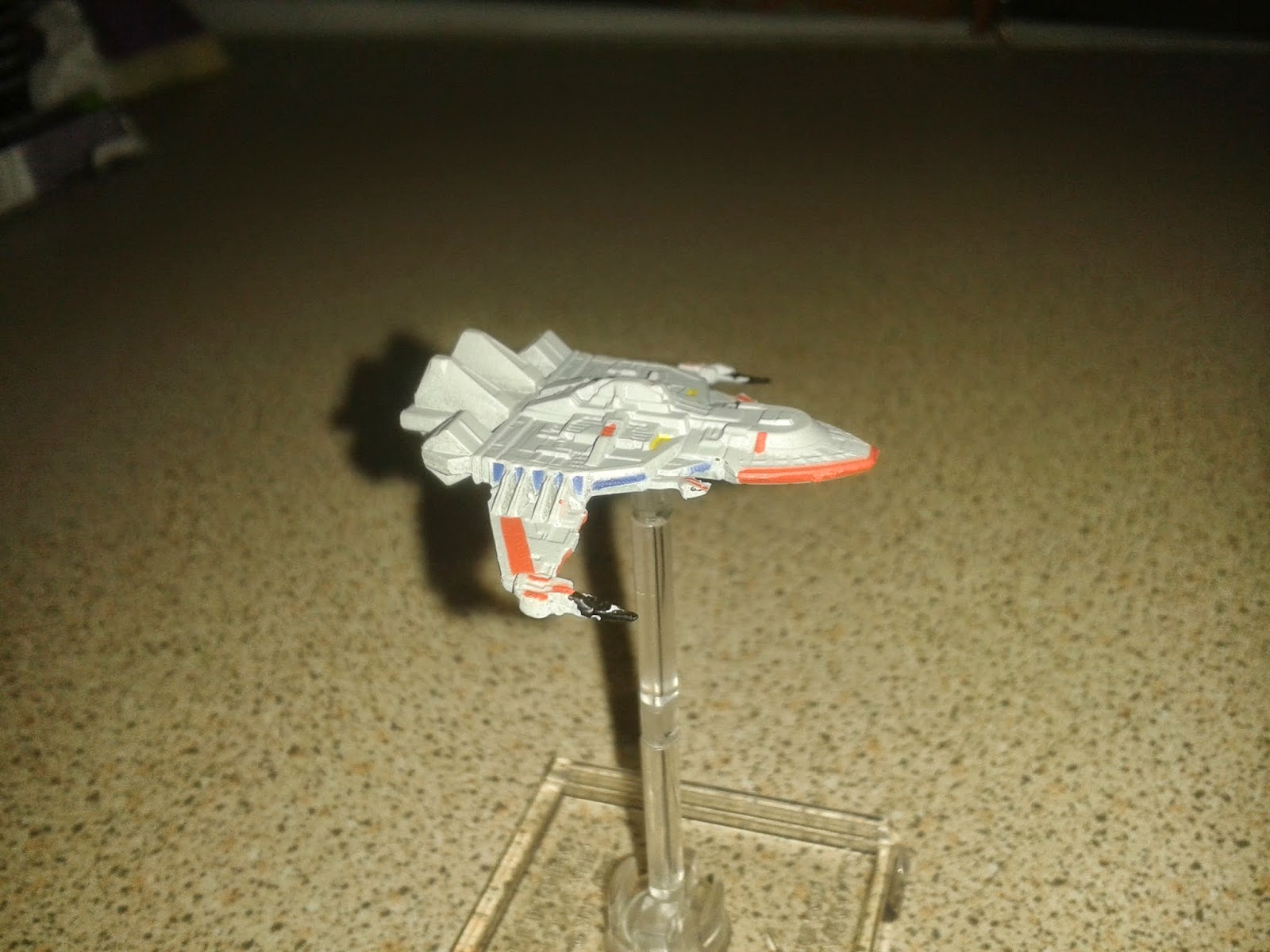 you can see the details well here. 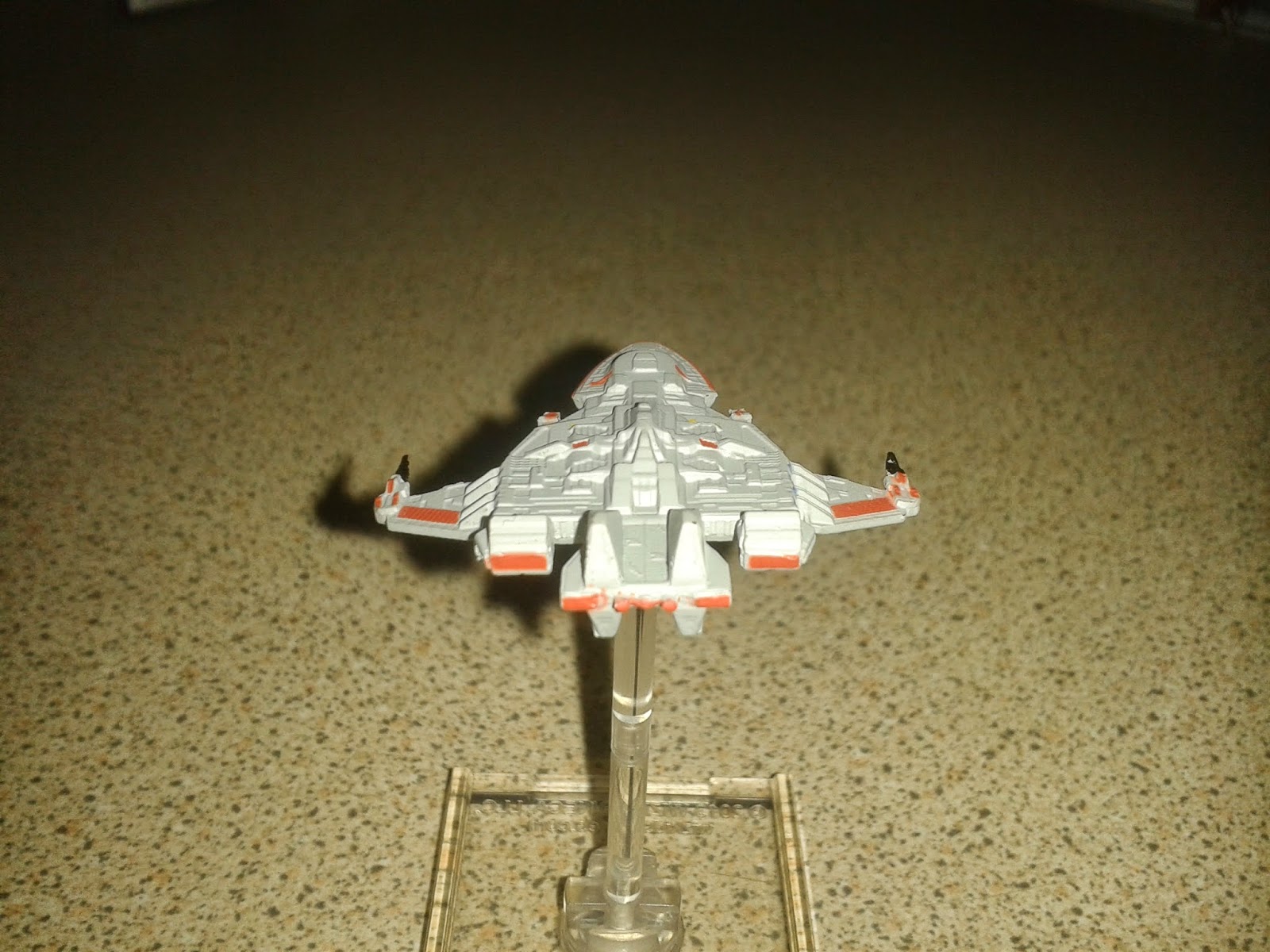 all in all a great little ship, with some fun options to try.
Labels: Attack Wing independent Star Trek unboxing