The Dominion forces bring some much needed reinforcements to the table with the Jem Hadar BattleCruiser.  As you can see, its a BIG ship.  But is it a lumbering beast? 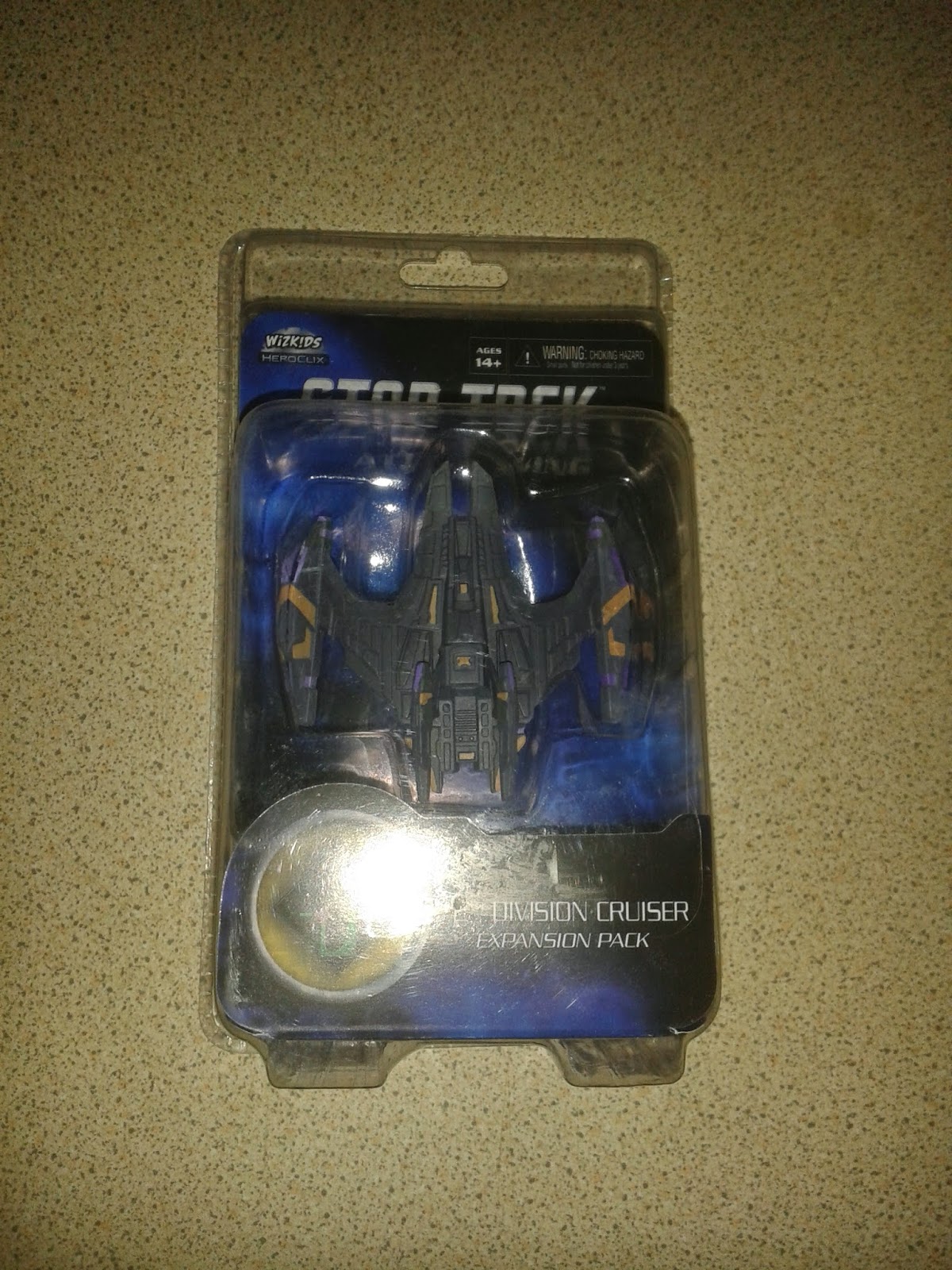 Firstly inside the box as always are the card tokens. There are lots here 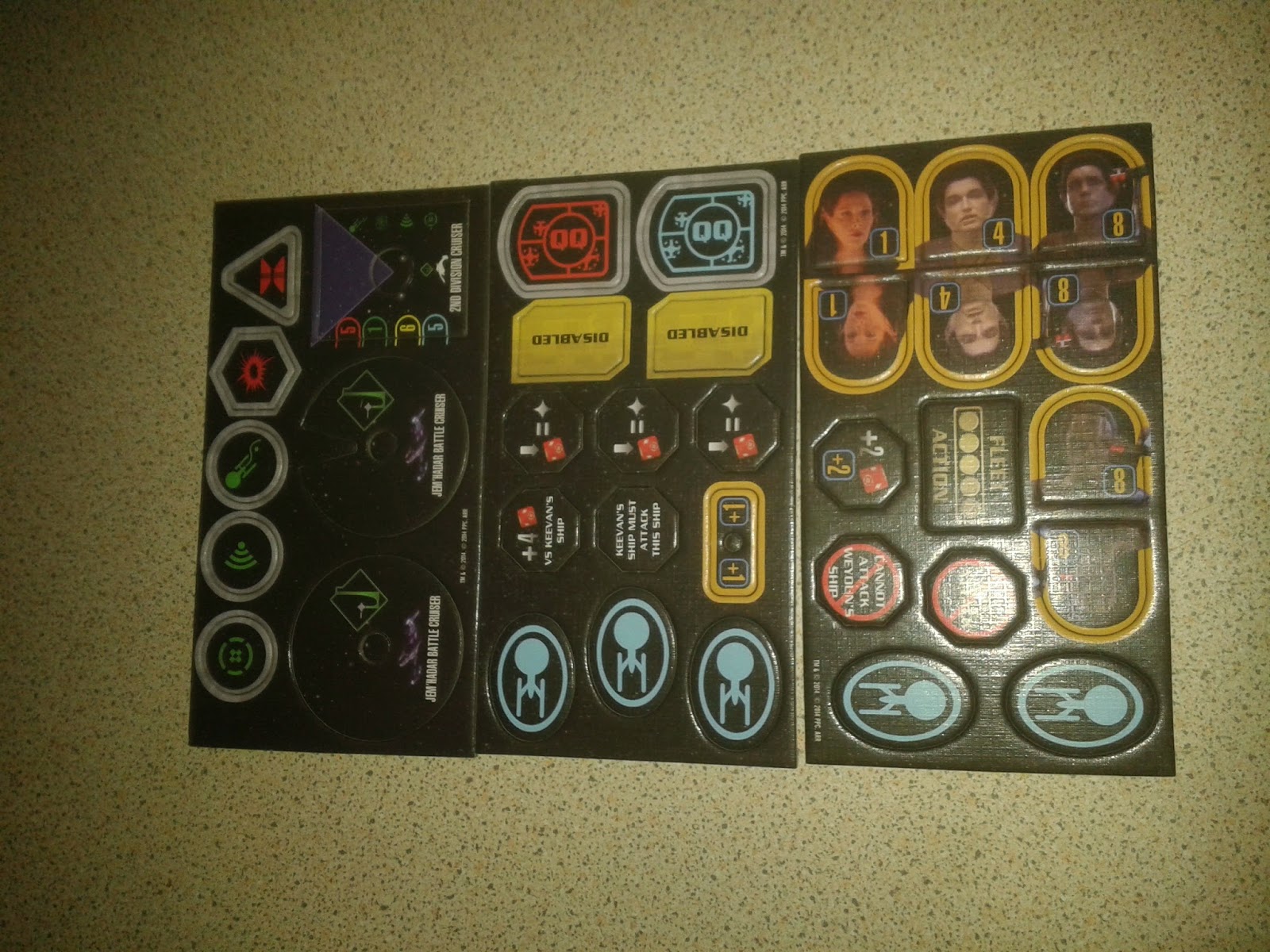 You get 4 captains, all sorts of reminder tokens, your admiral and fleet action tokens plus all the other bits you need. 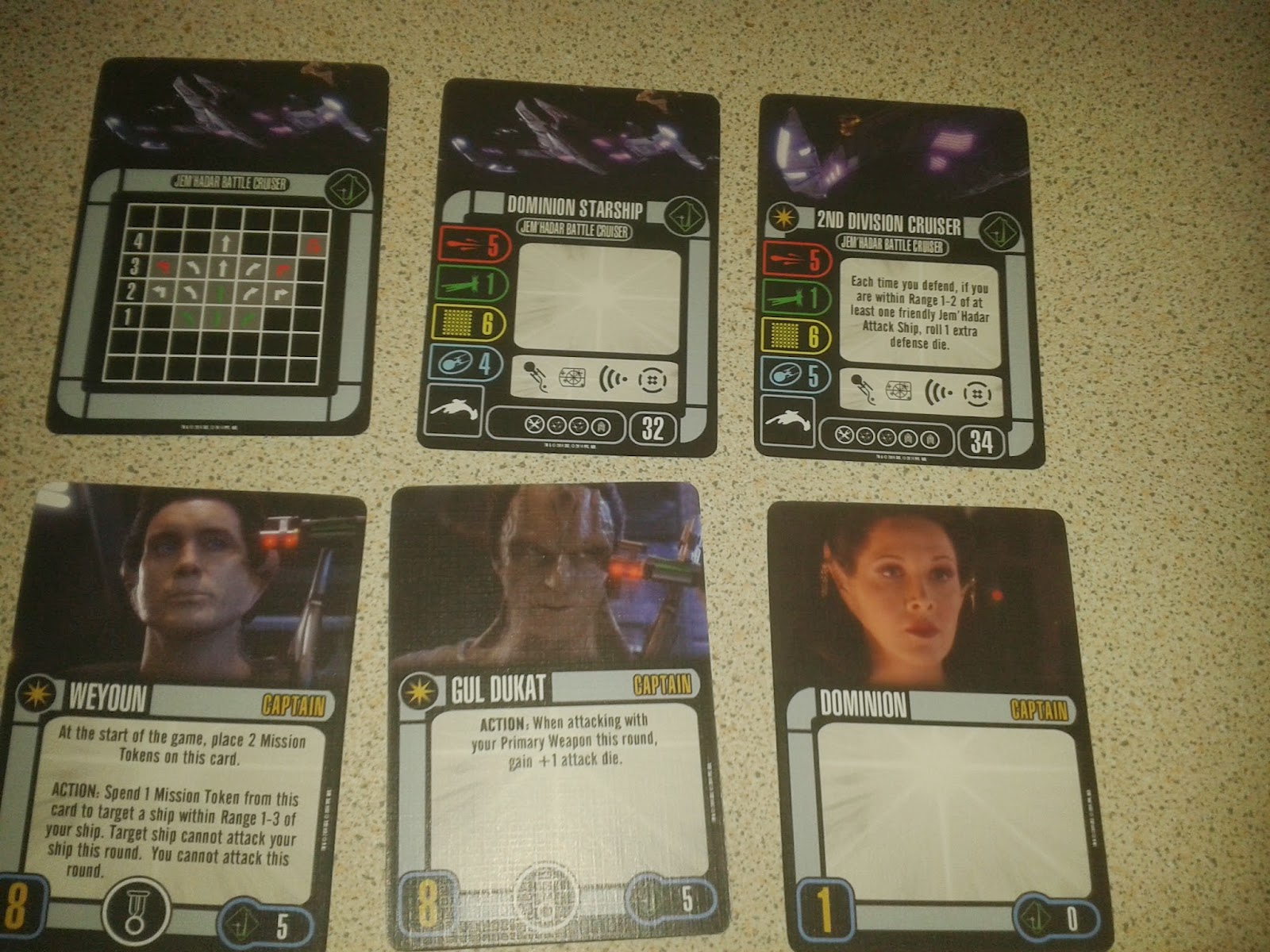 For a ship of its size you can see its very nimble, and has a 4 come about as well making this a real threat and far more manoeuvrable then the cardassian ships.  The named one is pricey in points, but packs a big punch with high attack, high hull and shields.  Its named ability is not much use without a Jem Hadar attack ship near it though.  It has a good action bar, evade, target lock scan and battlestations, and comes with two high skill captains in the from of Weyoun, who allows you twice a game to pick an enemy ship that can not attack you though at the expense of not attacking yourself, and Gul Dukat.  Dukat is probably my favourite trek villain, ruthless and charming at the same time, his action allows you to add another attack dice on your primary weapons as an action.  Of course as you can see you get the free captain skill zero option as well. 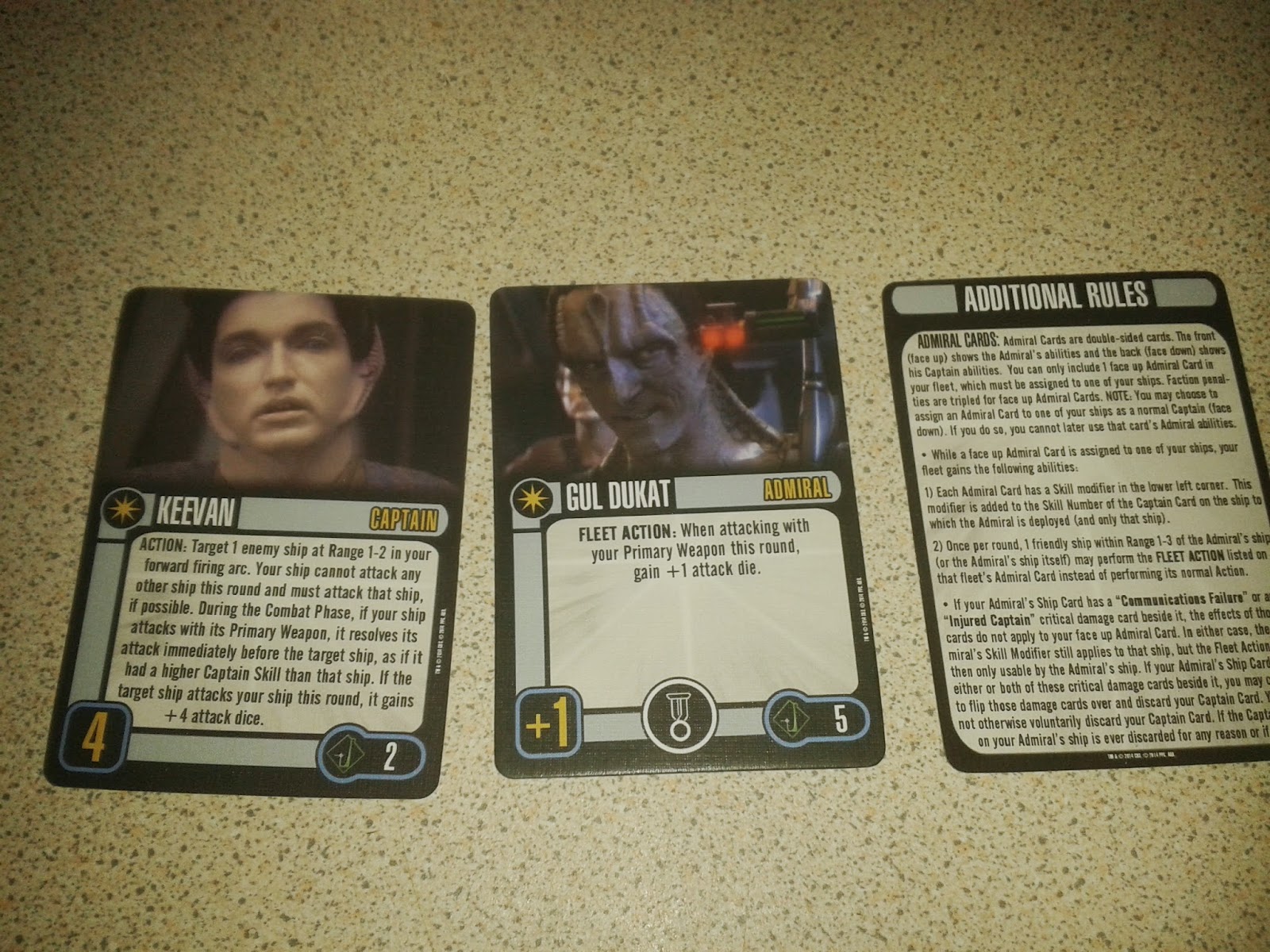 You also get Keevan as a captain option who allows you to roll more firepower and shoot first as his action though the downside is if the targeted ship shoots back it gets plus 4 attack.  You also get Admiral Dukat, and the rules card for how admirals work. 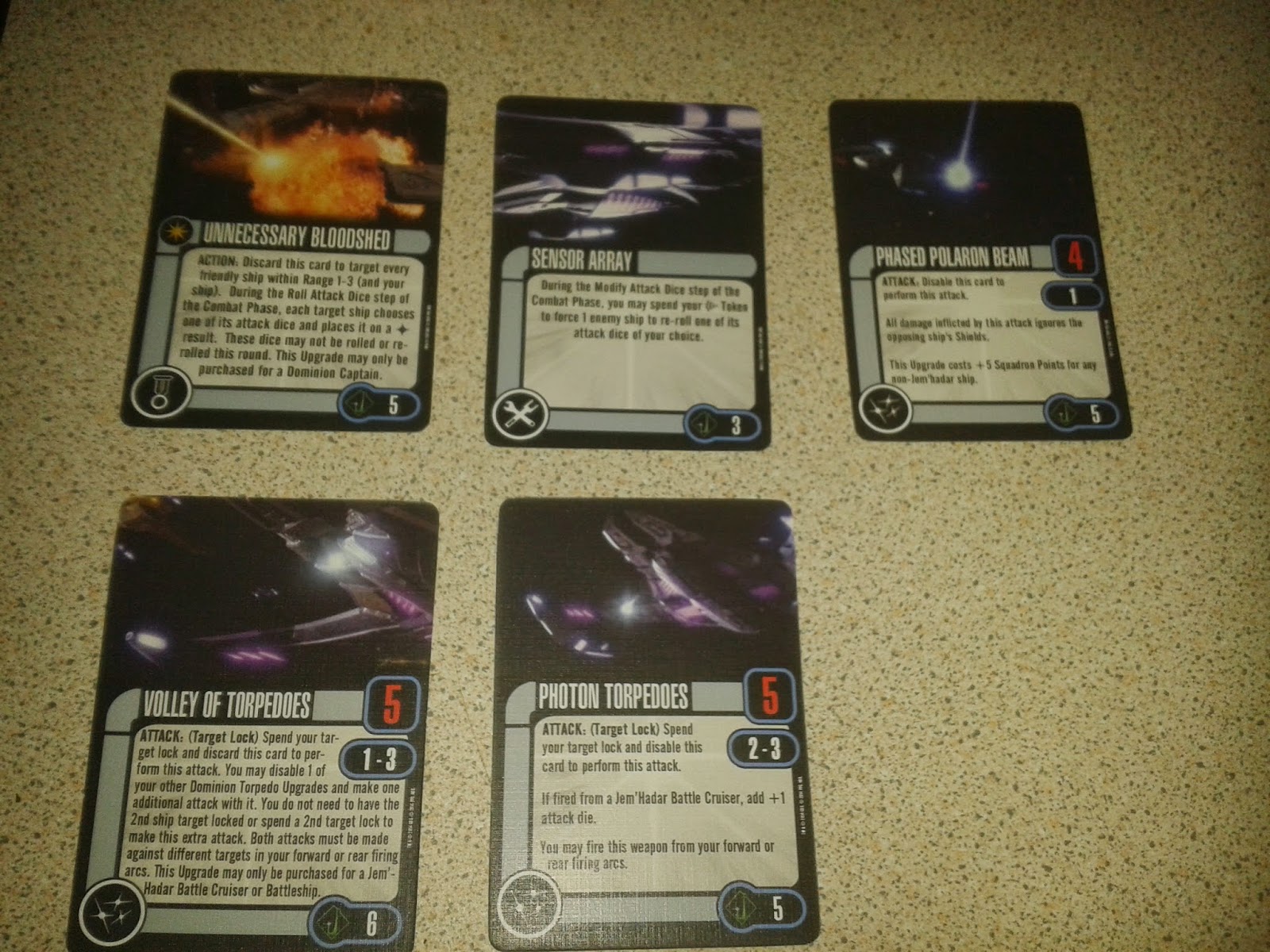 For the packs elite talent you get unnecessary bloodshed which allows all ships in range 1-3 to put one dice on a hit automatically. very handy for when you want to lay down a mass barrage of fire.  Sensor array allows you to spend your scan token to force the enemy to reroll one his dice.  for weapons we have Phased polaron beam, which ignores shields and hits straight onto hull.  Its a good weapon for other ships, but lower then this ships natural attack so not one I would take on it.  Next we have photon torpedoes, 6 dice attack on the battle cruiser.  And Finally the Volley of torpedoes weapon, which I a discard, but allows you to fire torpedoes at two different ships in one attack.  It can prove brutal when you want to lay don maximum firepower. 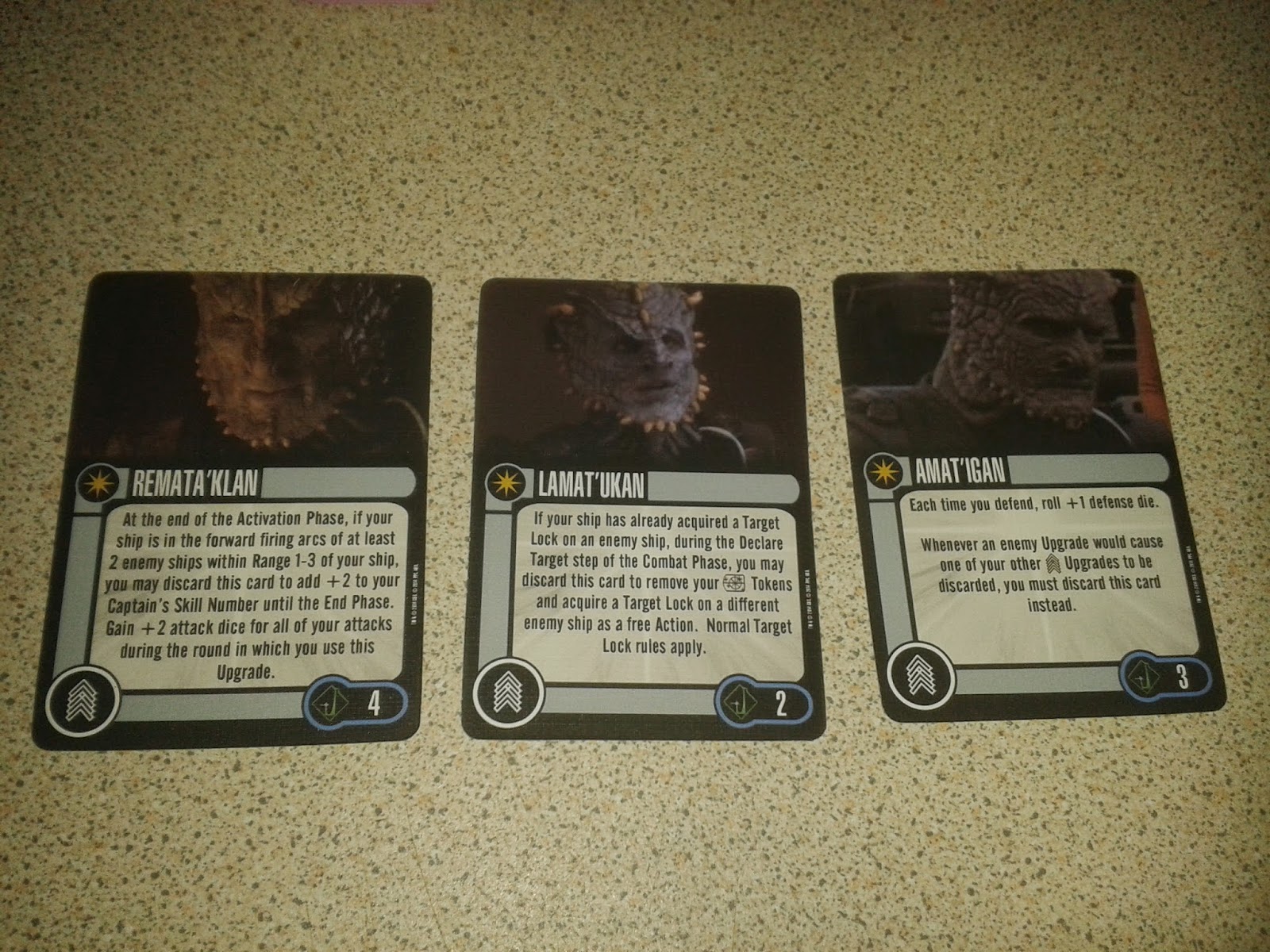 We have 3 Jem hadar crew on this ship, Remata Klan, who is a discard to allow you to increase your captain skill and attacks for a turn.  Lamat Ukan who can transfer a target lock to another ship, very handy for a sneaky barrage of torpedoes strike but ping that target lock to another ship as It does not cost an action.  Lastly Amat igan, who is my favourite crew in the pack he lets you roll one extra defence dice. 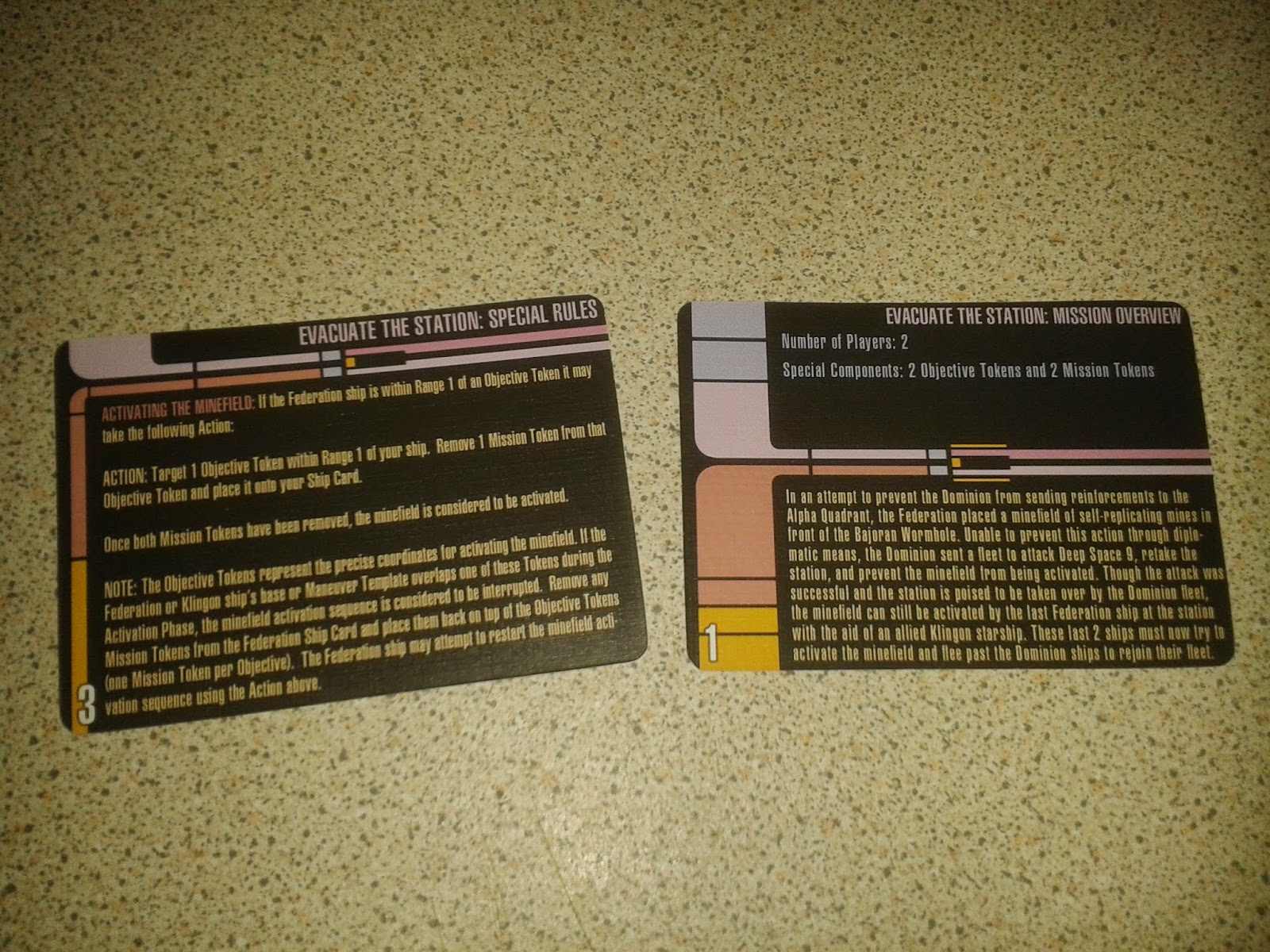 Another fun looking mission, very lopsided in points, but missions are all about the objectives.  And I shall look forward to trying it.

Now for the ship itself 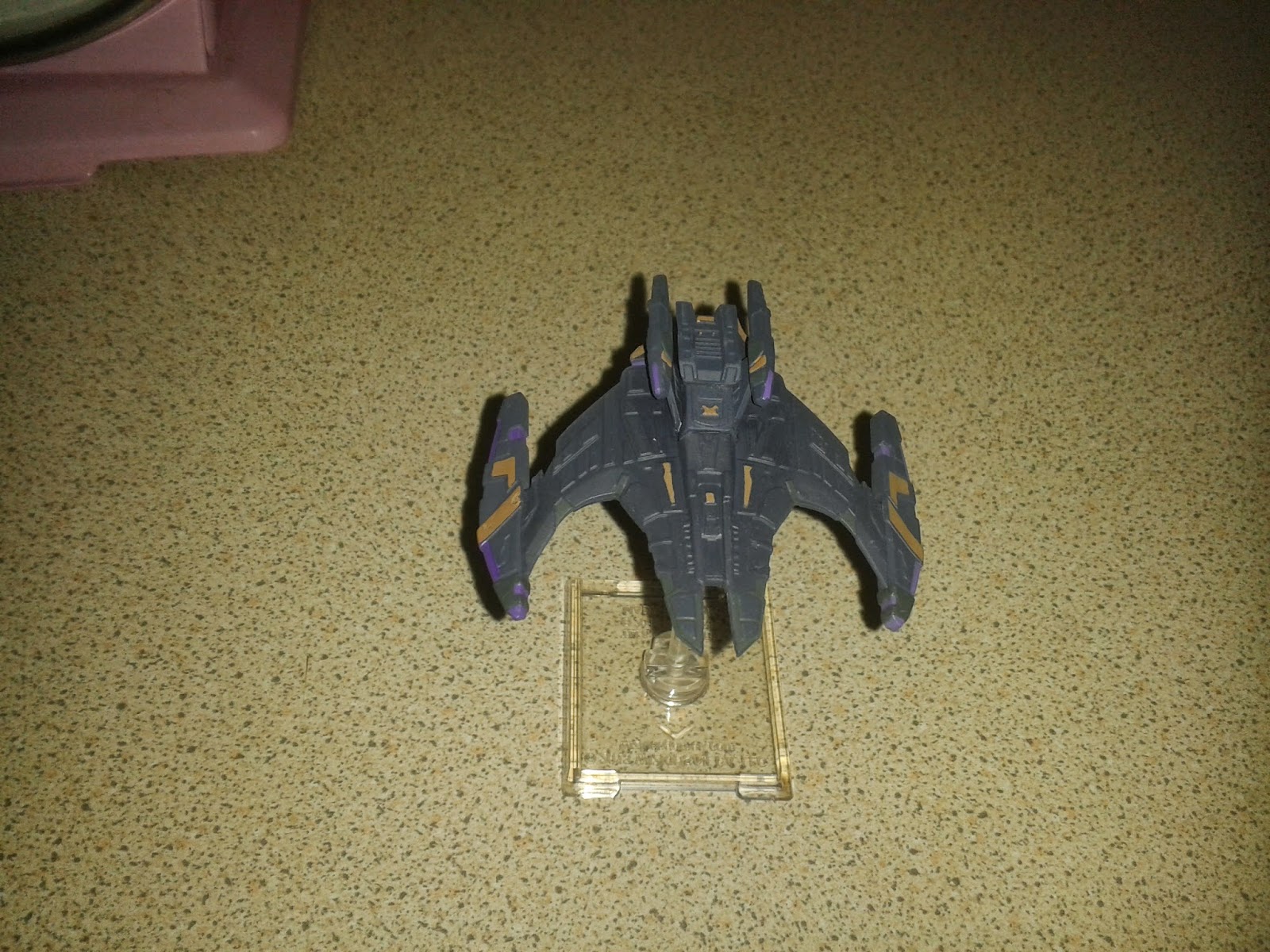 Its a big model, and sadly not one of the best paint jobs. it is detailed, but looks very flat with the factory paint job 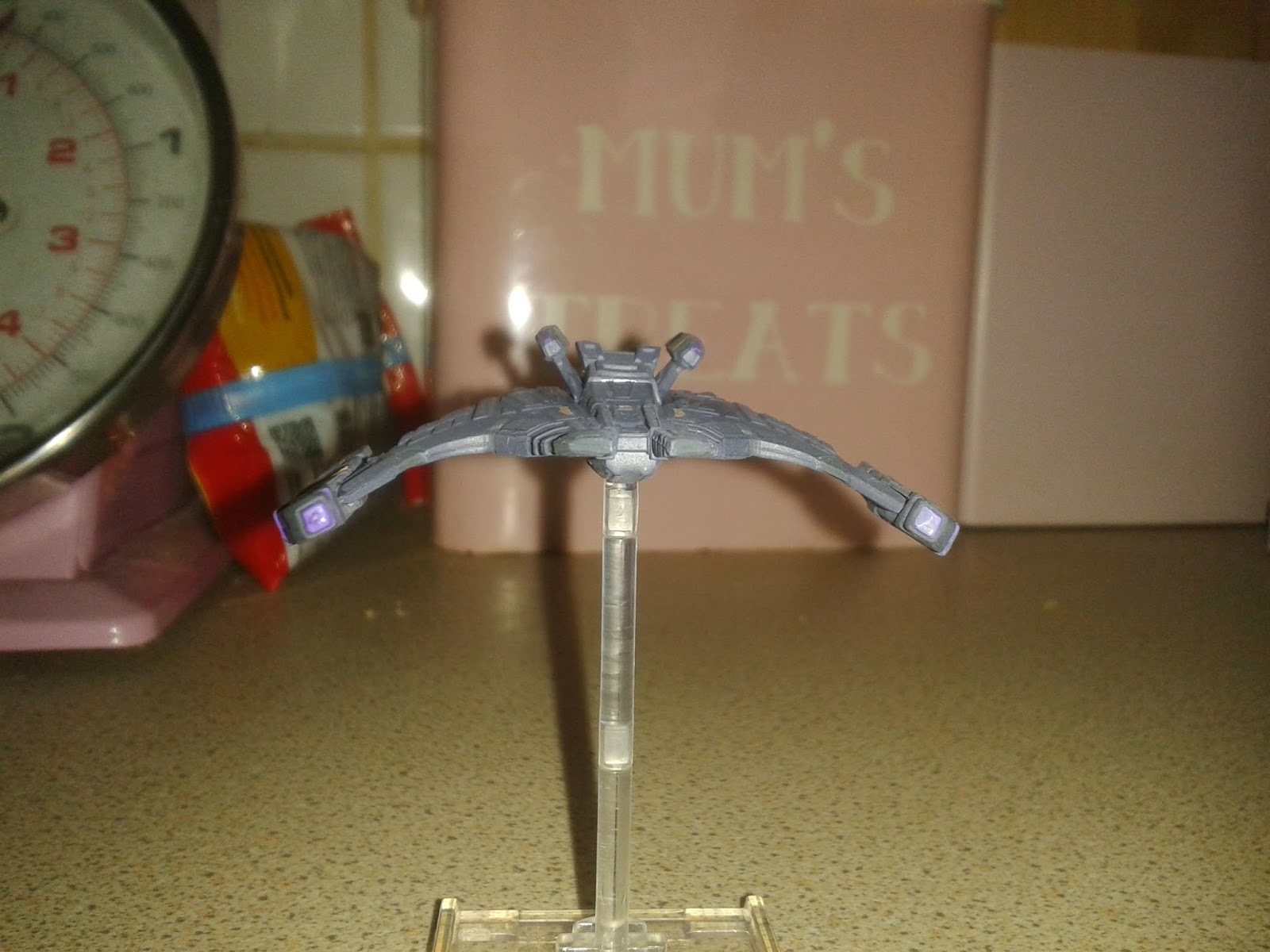 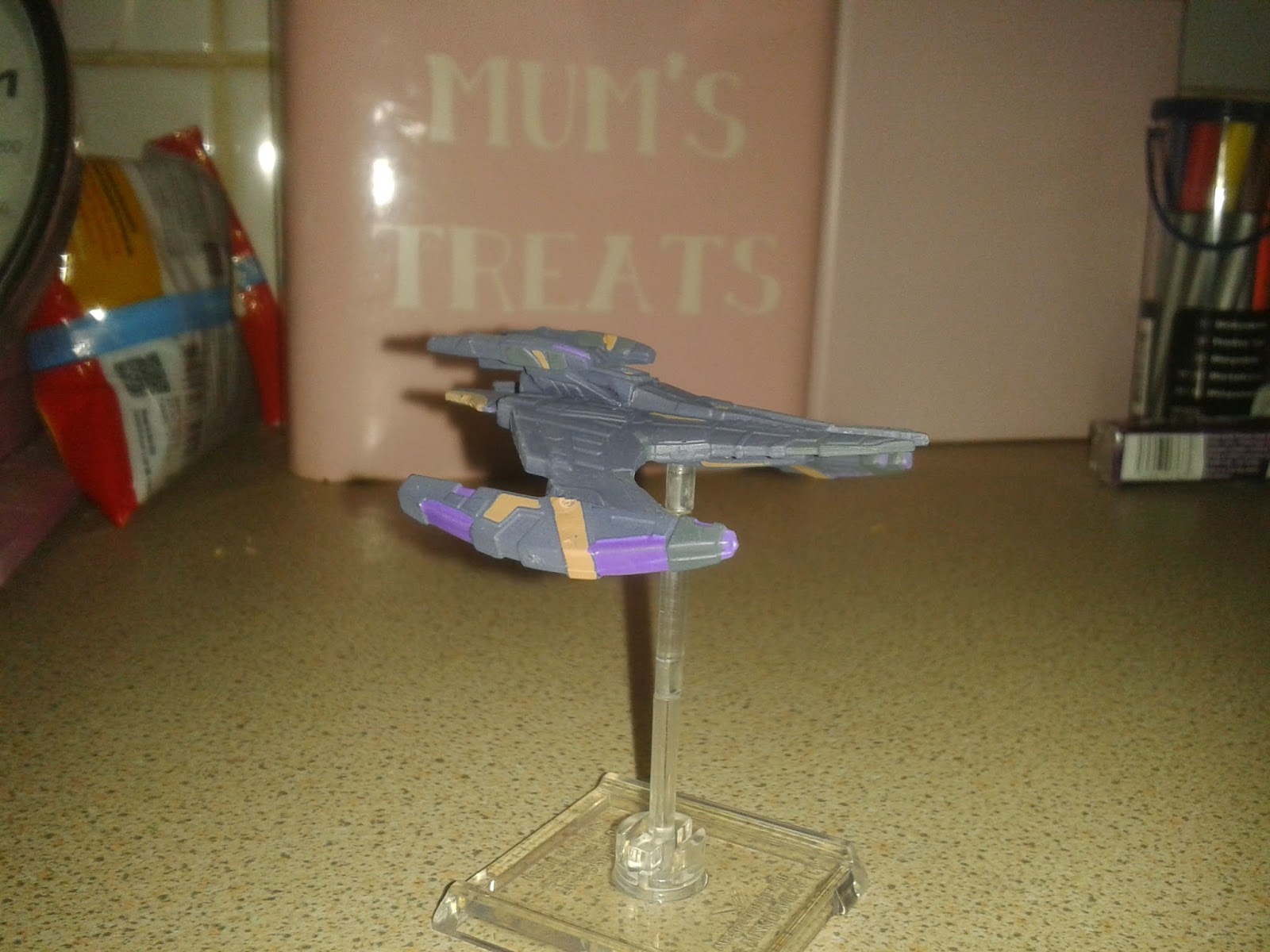 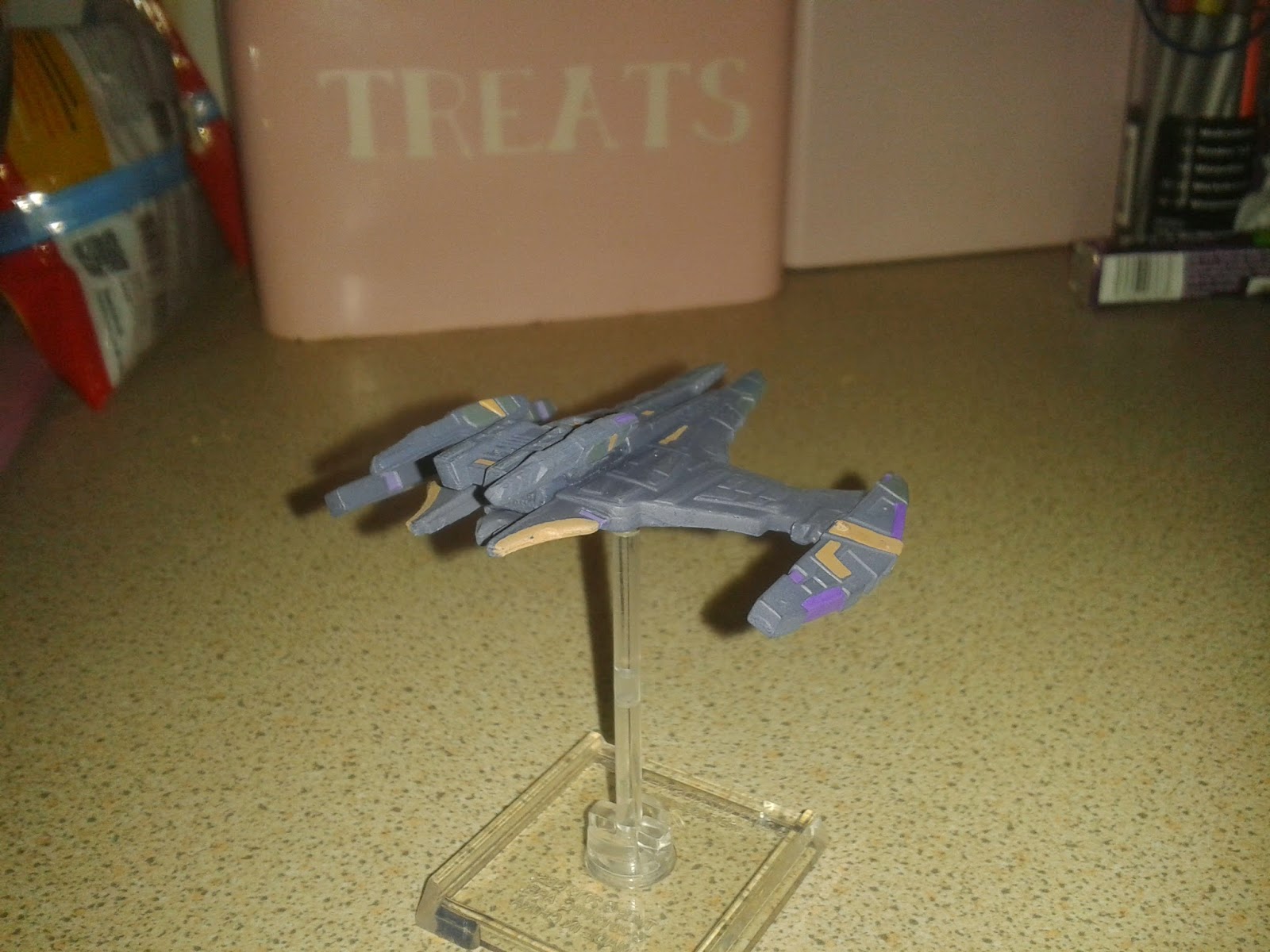 This model could really do ith something to make it pop, as it is a very flat looking model in colout and finish. 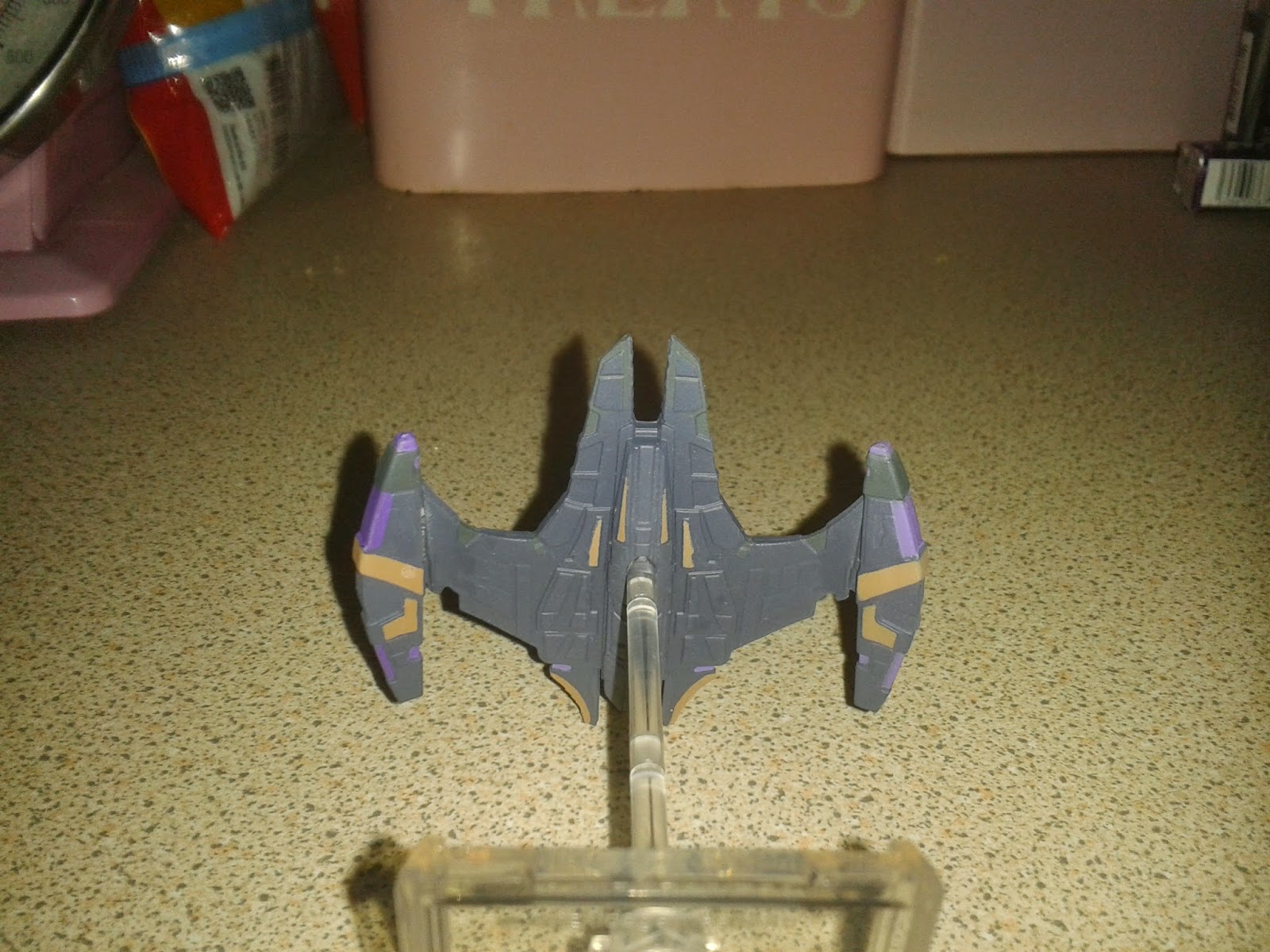 I am still looking forward to breaking this beast out on the table.