General Chang is one my favourite Klingons.  The main "enemy" in Star Trek 6 VI The Undiscovered Country.  He is great, fun and not your average blood thirsty Klingon, he shows cold intellect, cunning, and tactical awareness.  Today we look at his Prototype Bird of Prey 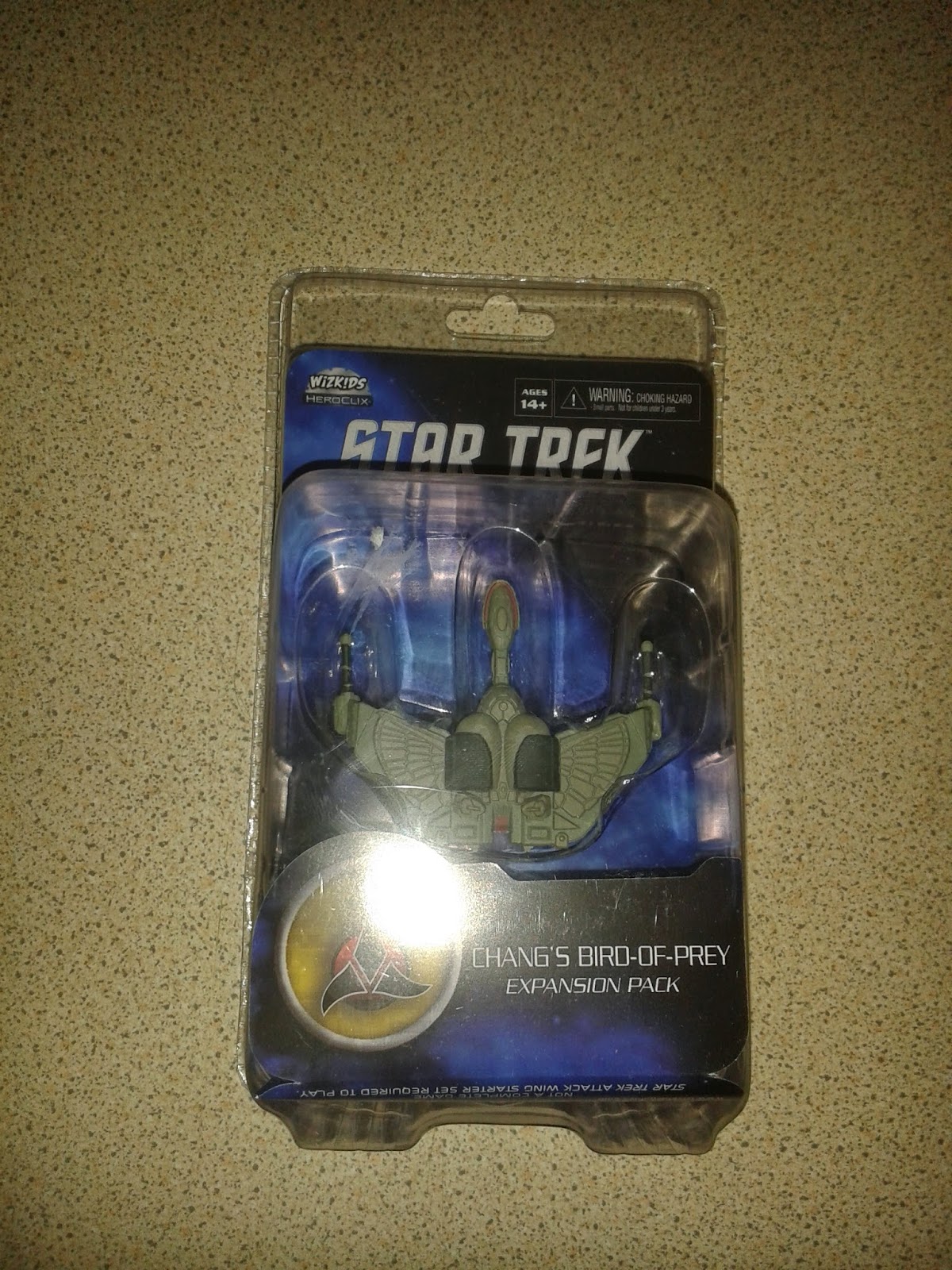 Chang's Bird-of-Prey was a prototype Klingon Bird-of-Prey commanded by General Chang in his efforts to discourage the potential peace talks between the Federation and the Klingon Empire. The vessel was equipped with a cloaking device that somehow allowed the vessel to fire its torpedoes while cloaked, an ability once considered impossible on other vessels, due to power constraints.
As the USS Enterprise-A escorted Kronos One, which was transporting Chancellor Gorkon to Earth for peace negotiations, the cloaked Bird-of-Prey hid directly......

under the Enterprise. The only sign of its presence was a large amount of neutron radiation, which was detected too late as the Enterprise crew witnessed what appeared to be two torpedoes seemingly fired from their vessel hitting Kronos One. The incident was further complicated by the work of saboteurs who altered Enterprise's databanks to give the appearance that two torpedoes had been fired. As a result, Gorkon was assassinated, and Captain James T. Kirk and Doctor Leonard McCoy- who had transported over to try to treat Gorkon's injuries - were arrested for his murder. Fortunately, the Enterprise daringly managed to rescue them, disobeying orders from Starfleet Command.

Despite some skepticism from his fellow officers, Captain Spock began an investigation of the ship, reasoning that someone involved in the attack had to have been on board the Enterprise in order to reprogram their computer to register the missing torpedoes or to fire the torpedoes in the first place. Having assembled the evidence, he was able to determine the existence of this vessel, as it seemed to be the most logical explanation, if theoretical. His theory was proven true as he gleaned the information by way of mind meld with Lieutenant Valeris, who had been found to be in league with the conspirators, learning that there was only one such ship. After learning the new, secret location for the peace conference from Captain Hikaru Sulu, on the USS Excelsior, both vessels headed to Khitomer where the Bird-of-Prey was waiting for them.
As Chang quoted Shakespeare over all the comm channels, his ship opened fire on the helpless Enterprise, causing it heavy damage. The Excelsior, arriving late, was just as incapable of tracking Chang's ship and was hit as well. Spock determined that despite its cloak, the Bird-of-Prey still released plasma exhaust, and based on an idea from Cmdr. Uhura, installed equipment, with McCoy's help, on a photon torpedo designed to catalog gaseous anomalies. Once fired, the torpedo wound around space, slowly beginning to lock in on the exhaust from the Bird-of-Prey, until it impacted on the unshielded bridge, killing Chang and his command crew and exposing the ship. Combined fire from the Enterprise and Excelsior then destroyed Chang's ship.

As usual we get a nice selection of all the card tokens required by the ship. 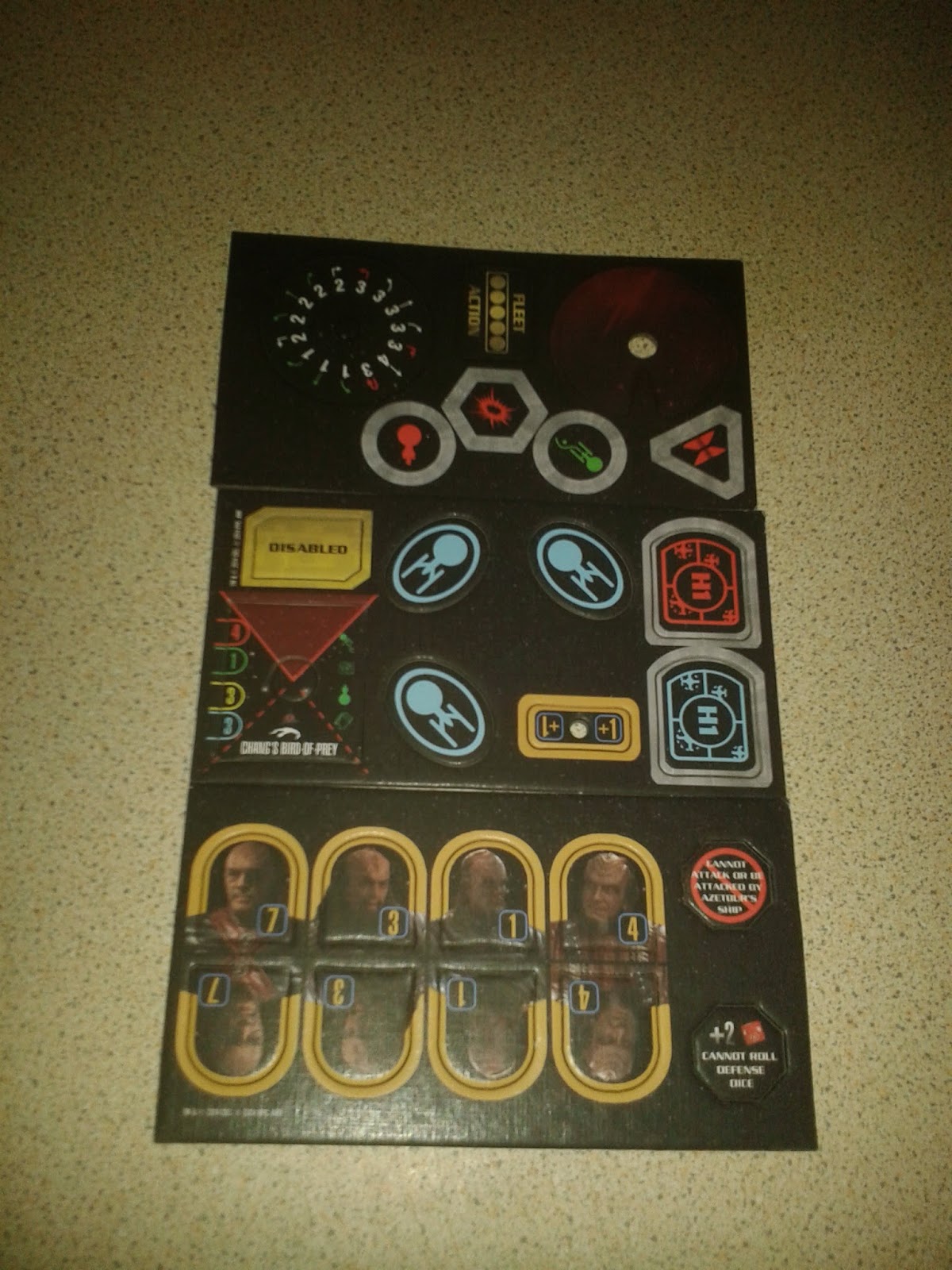 Yes, there is a fleet action token and admirals plus as this comes with an admiral. 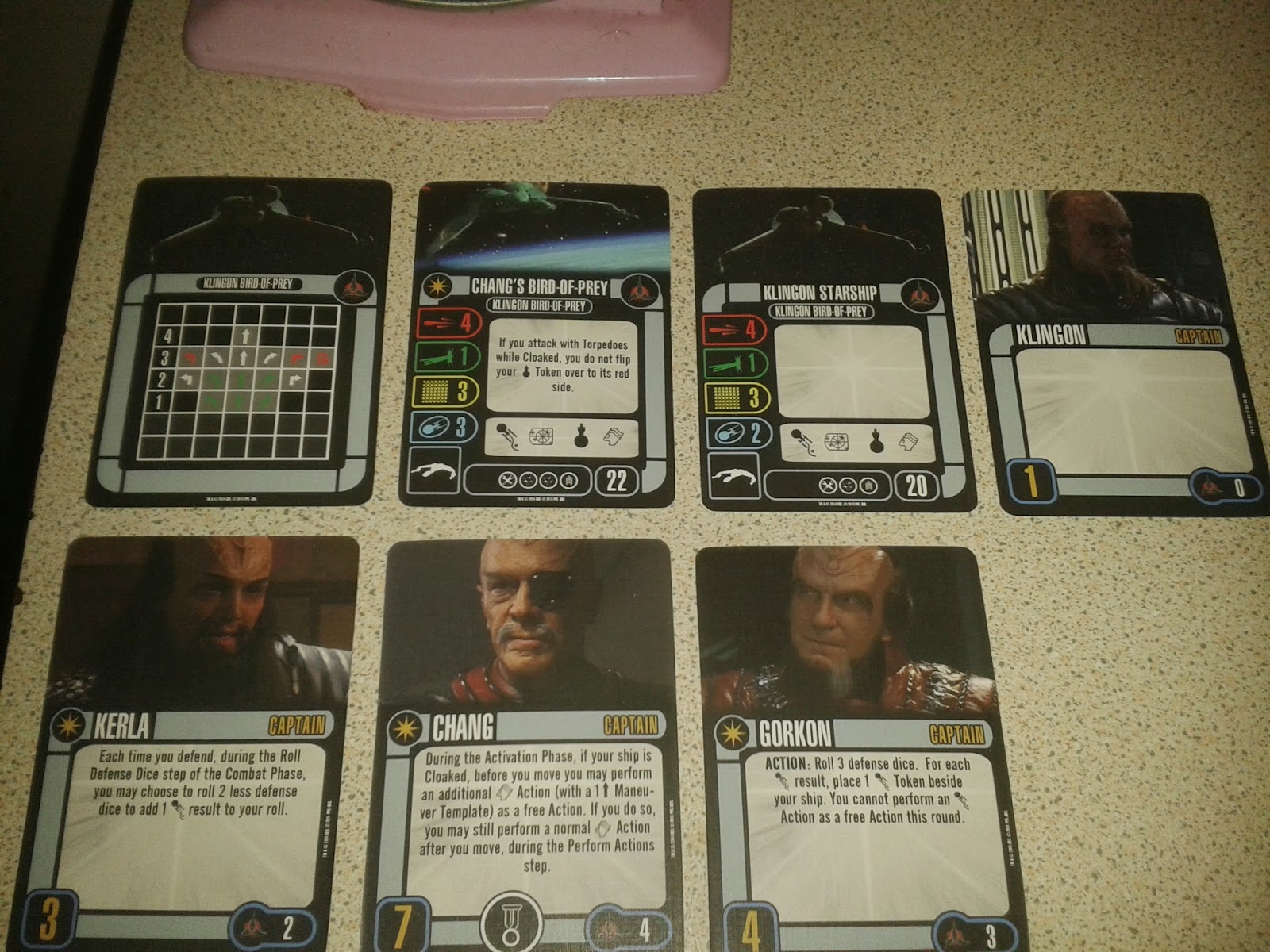 So you can see the ship is fairly nimble and has a come about.  The named ship is solid stats good high attack typical of Klingons, with evade, target lock, cloak and sensor echo for actions.  The named ships ability is you can fire torpedoes without flipping your cloak token to red.  Well represented by the ships ability in the film.  We have our generic captain, Kerla, Gorkon, and Chang of course.  Changs ability is great, if cloaked you can do a free sensor echo, then another one should you wish as your normal action making him very manoeuvrable.  Kerla adds a cheap captain option you can use if cloaked and need to knock off two hits his ability guarantees that.  Gorkons ability is a bit of a gamble, not one I would want to take on a captain, but as an admiral.... that's different 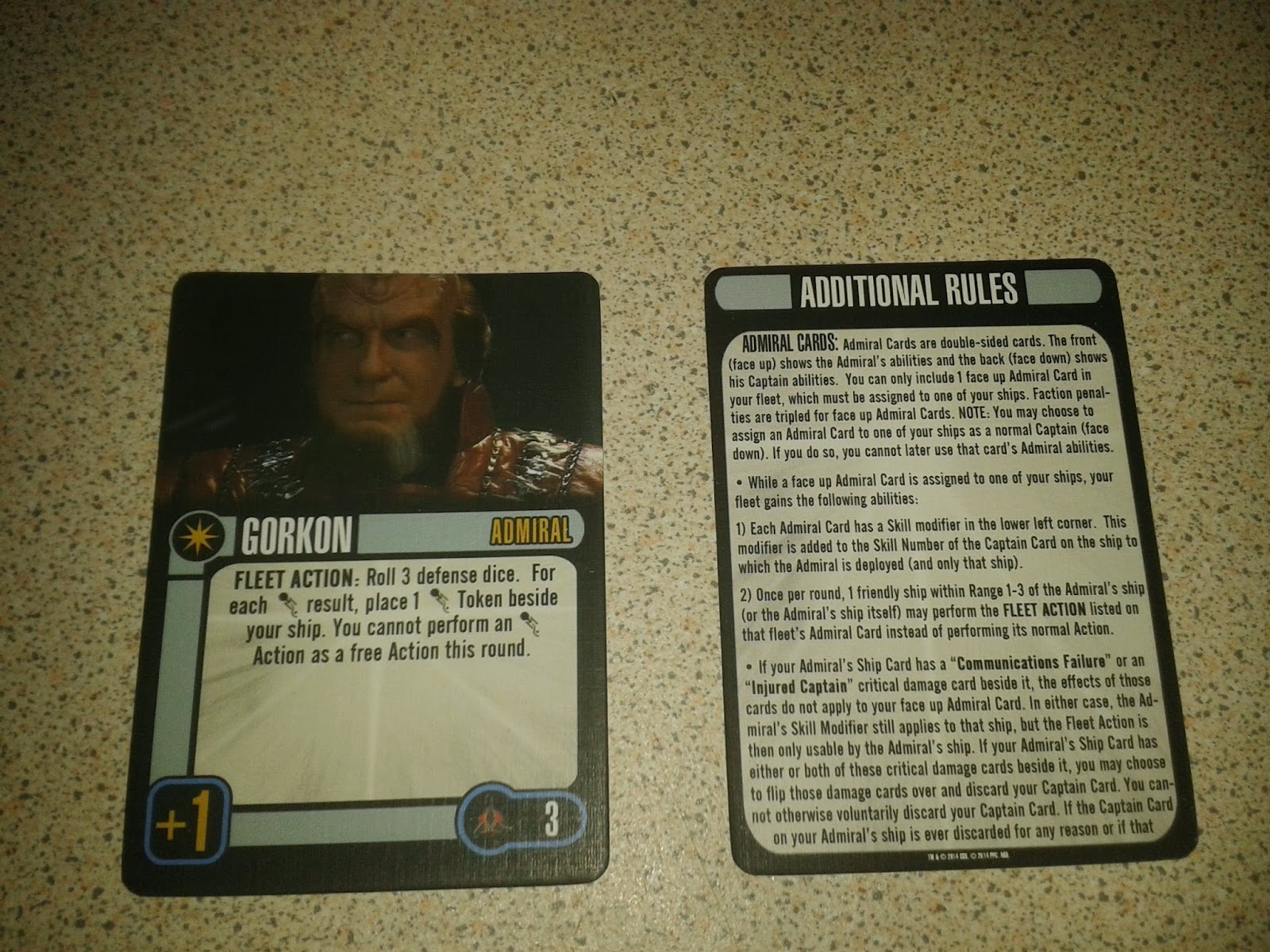 The admiral version adds plus one to your captains skill and allows the action on other ships. It comes with the rules for admirals as well. 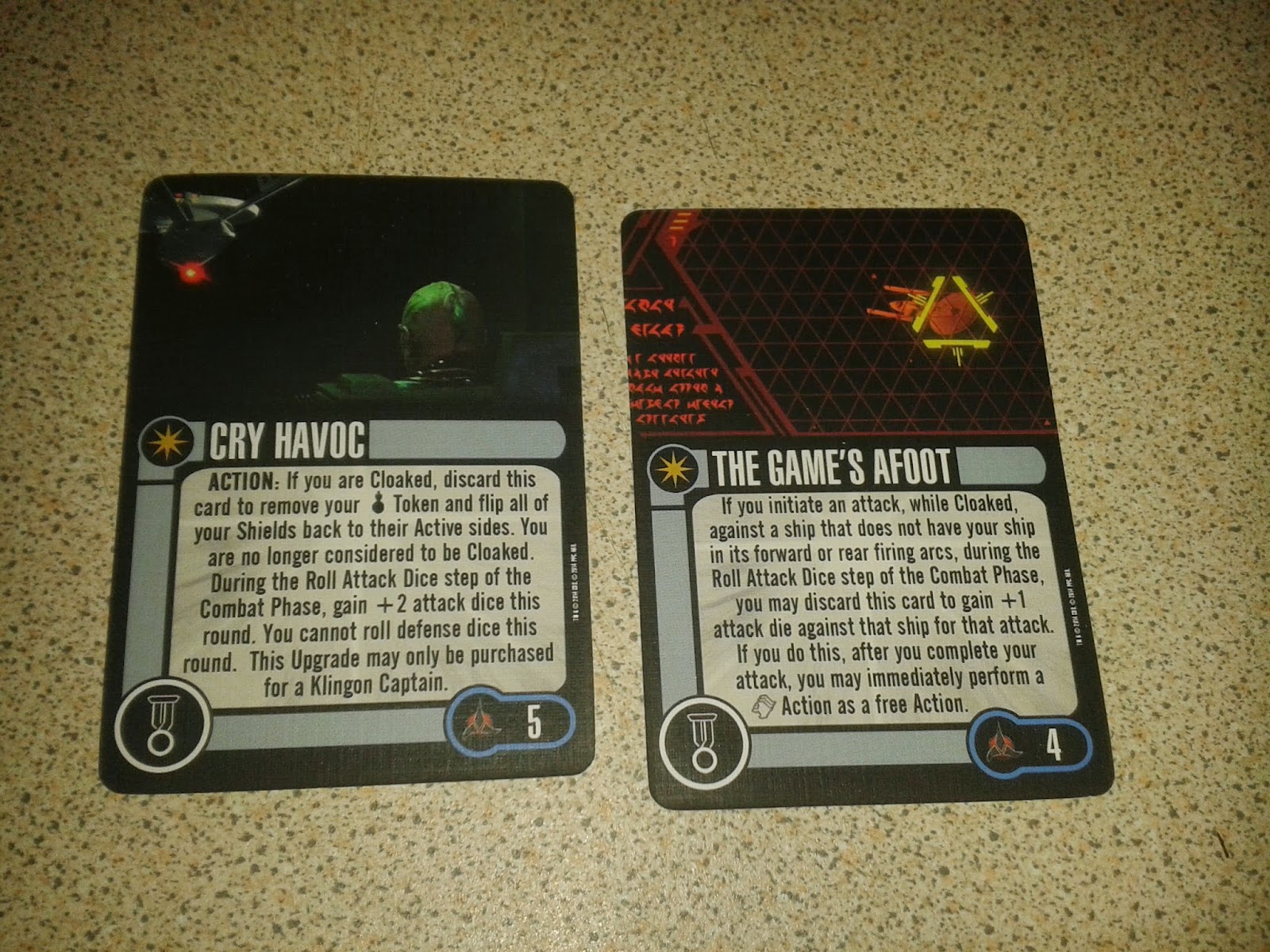 The elite talents are good, and of course very characterful with Shakespeare quotes.  The games afoot really adds to changes ability to switch positions fast. 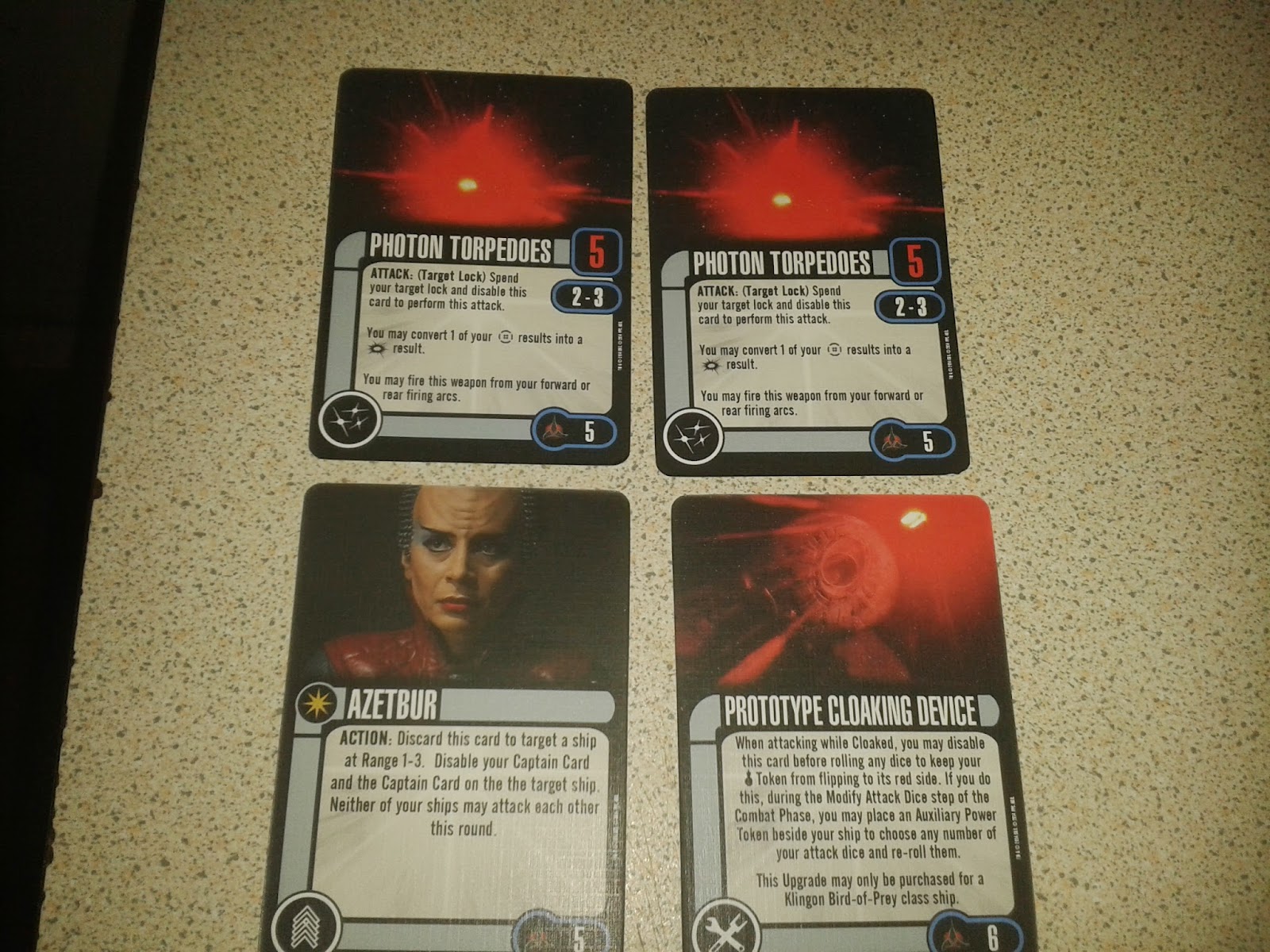 You get 2 copies of photon torpedoes, as the ship has two weapon slots, and with its ability of fiing them and remaining cloaked allows options to double stack torpedoes.  Azetbur is Gorkons daughter, and can be useful to avoid getting shot for a turn if you end up in the arc of another ship. 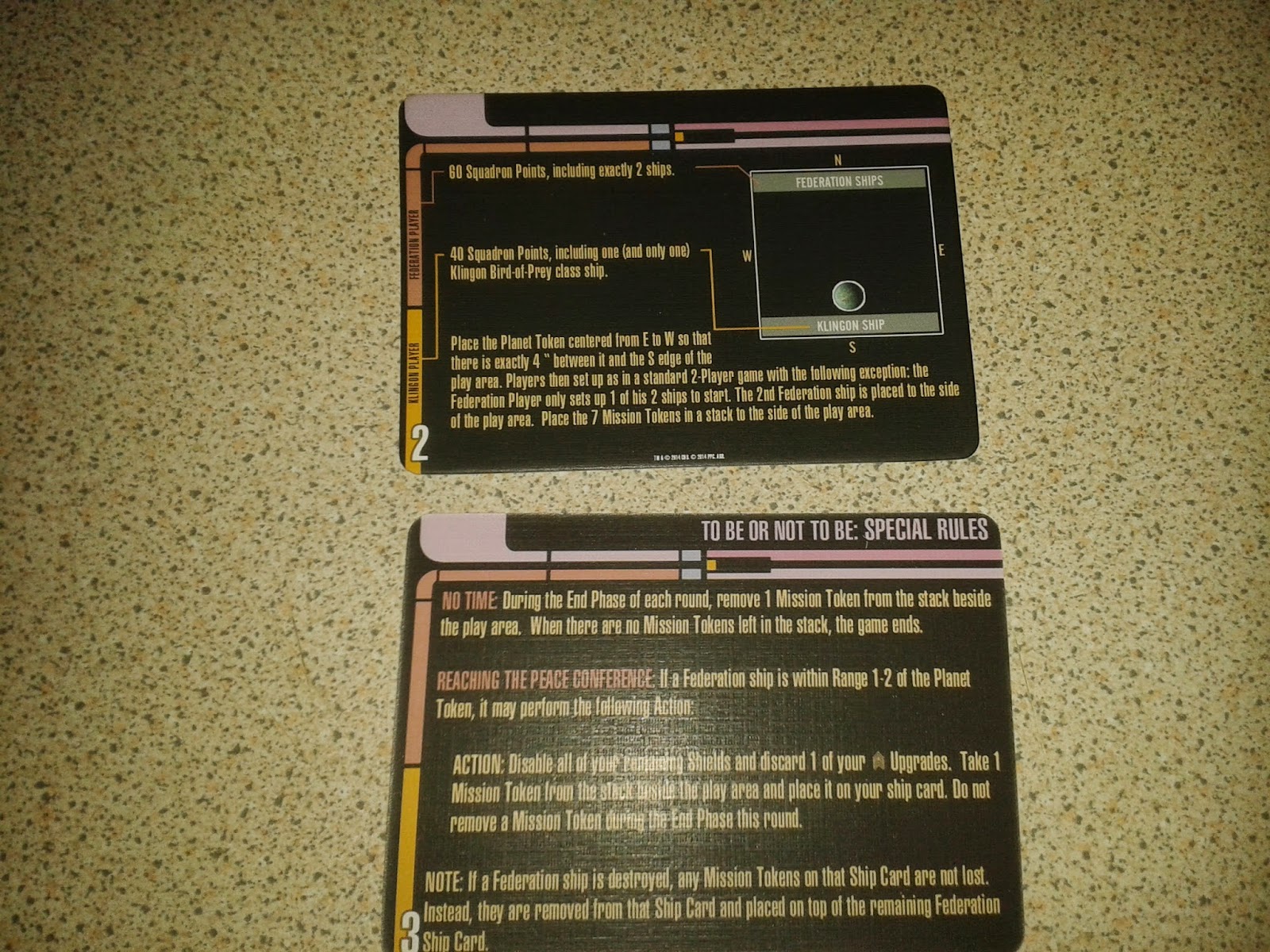 The mission looks great fun, Shakespeare named of course! it follows the end of the film very closely and I shall look forward to playing it.

Now.. onto the ship itself.! 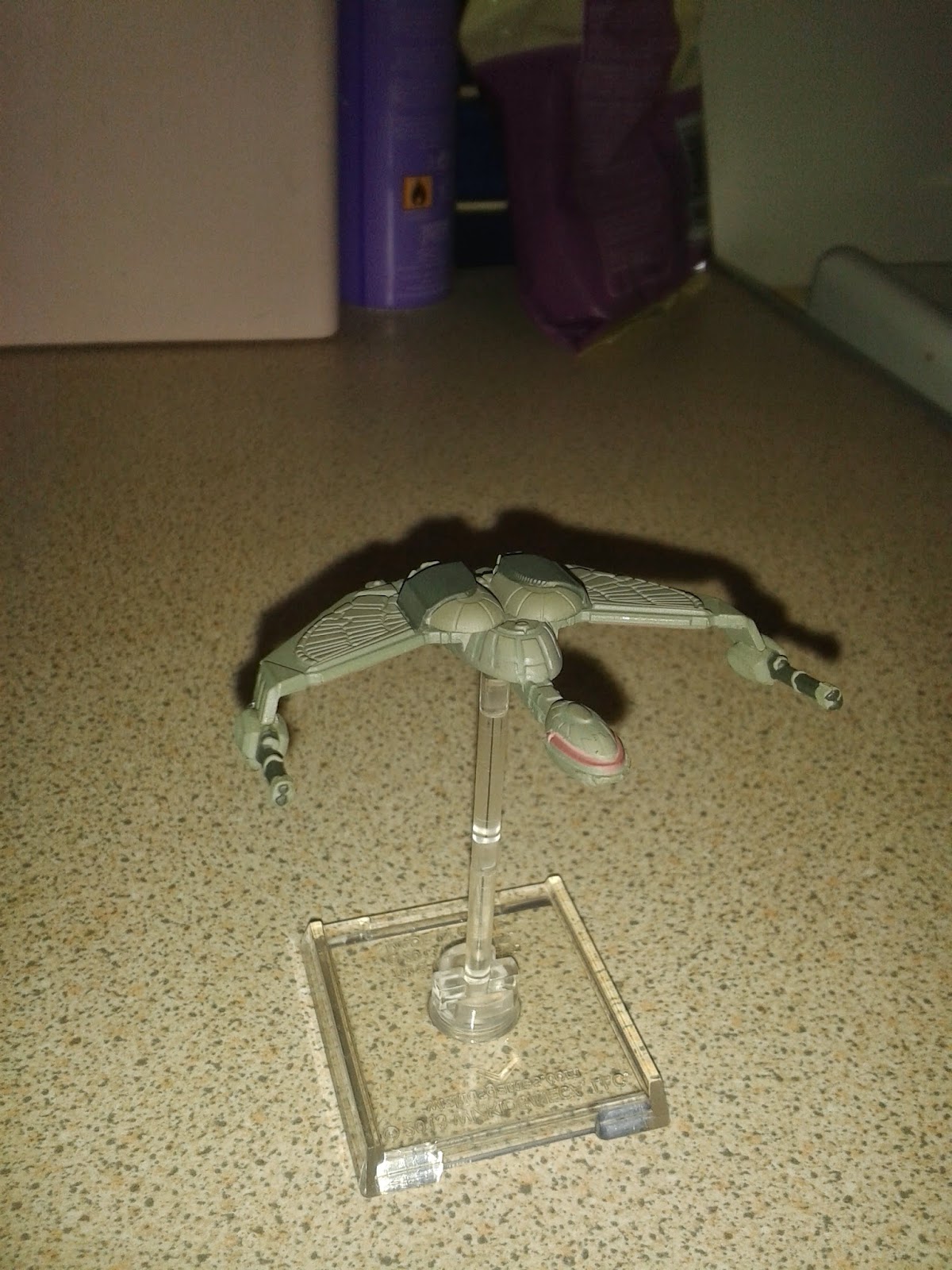 I love the look of the Bird of the Prey, this one has its wings in flight mode. 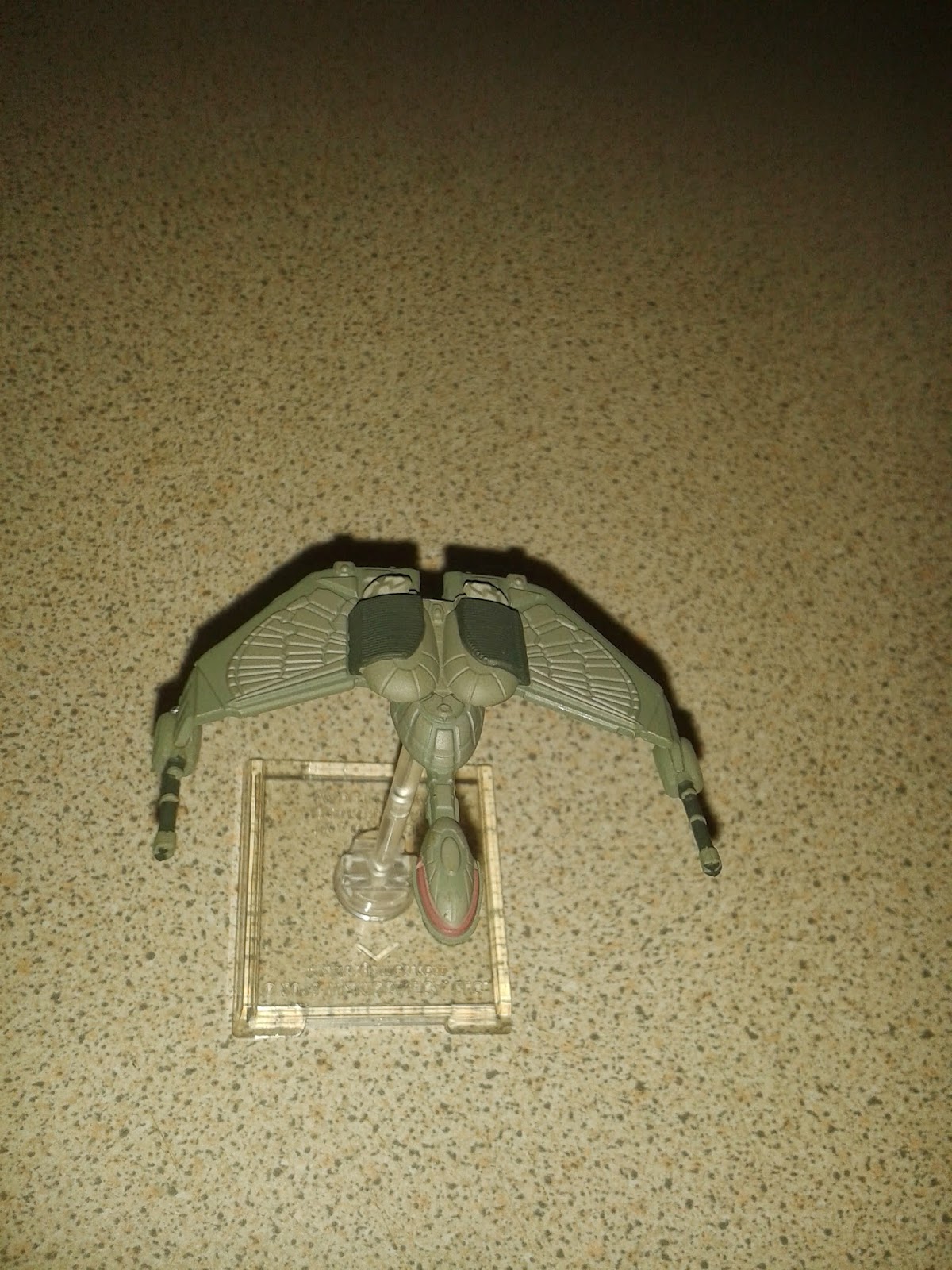 So of course I will need another one that has its wings down in attack mode. 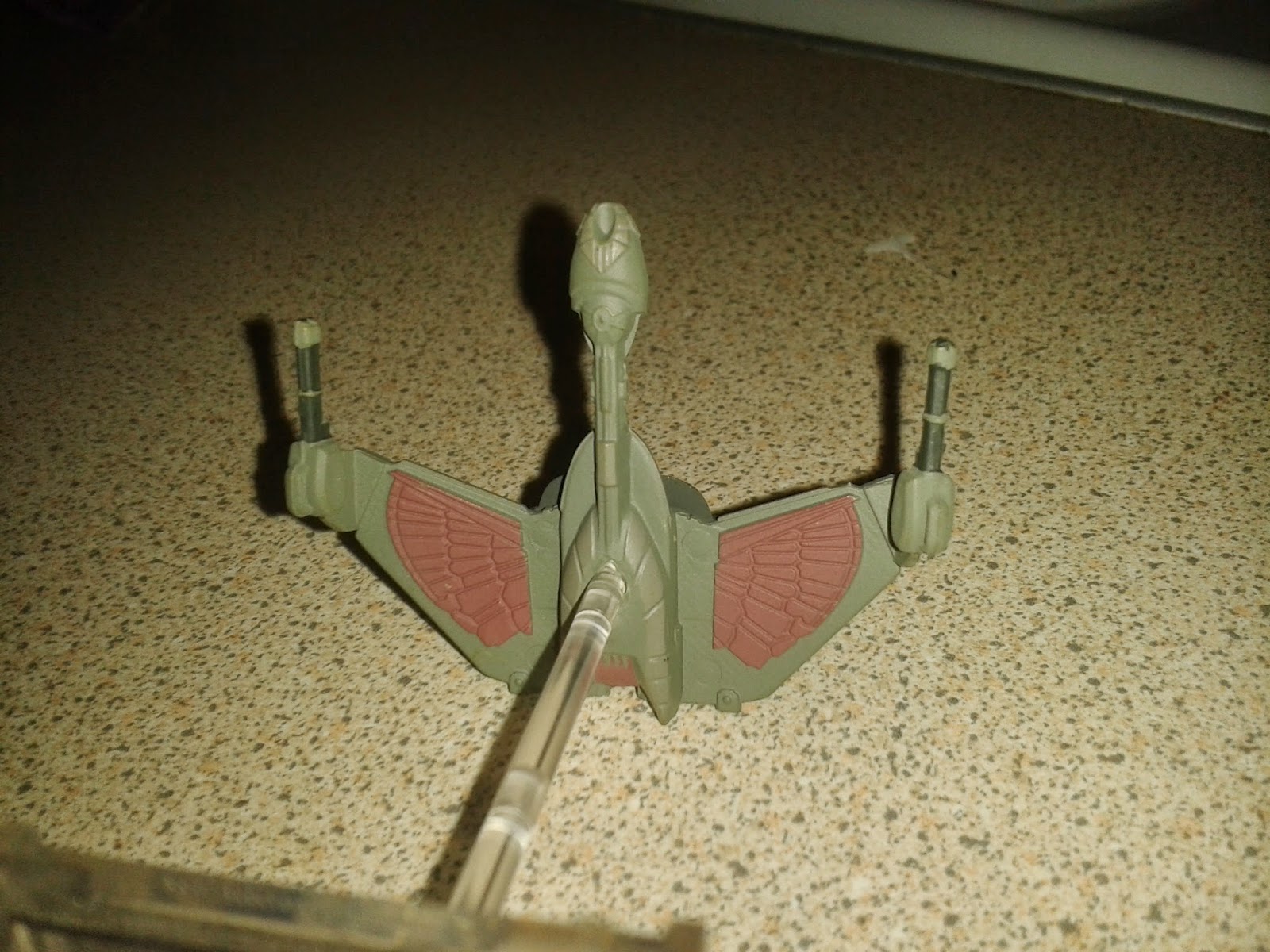 it is basically painted, but nicely detailed, as said before a wash would bring this up nicely. 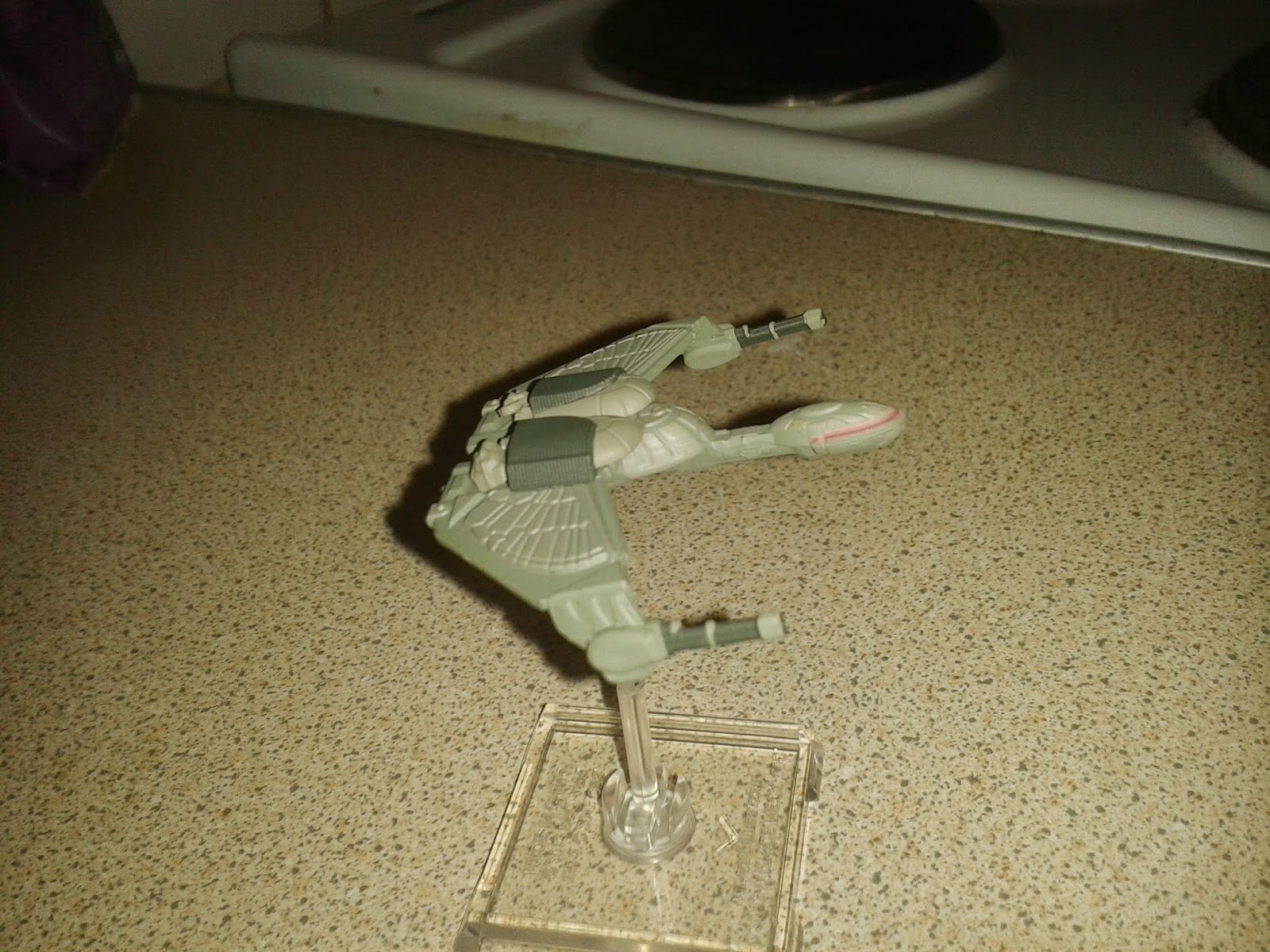