The YT1300 has some pretty solid builds, here I am taking a look at the pilots included in the expansion, to see what we can come up with, and what roles they may fulfil.

Firstly we have the Lowly Outer Rim Smuggler 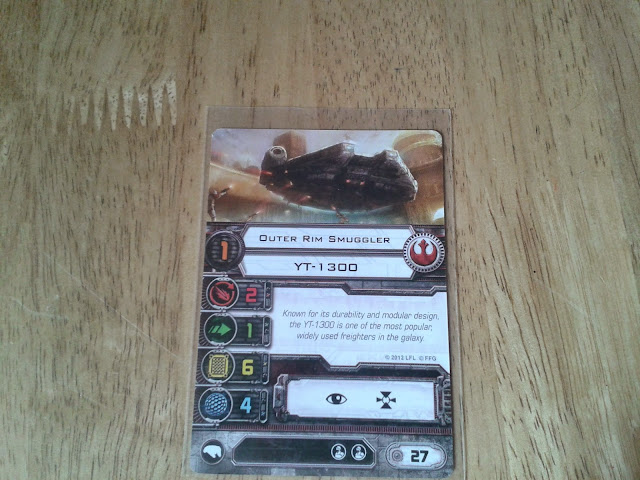 Now why did I say Lowly? well his stats are worse then all the other pilots, less firepower, Less Hull, and Less shield! He is not hat expensive, for 27 points he is still fairly well armoured with a combined 10 hit points. For an extra 4 points we could put a shield upgrade on him to bump that up.  He does not throw out much firepower, and being Pilot Skill 1 moves first and shoots last.  He has his roles, I just don't see many of them myself. True his weapon does have a 360 arc of fire so he may be worth a look at again at some point.

Next up at Pilot skill 5 is Chewbacca 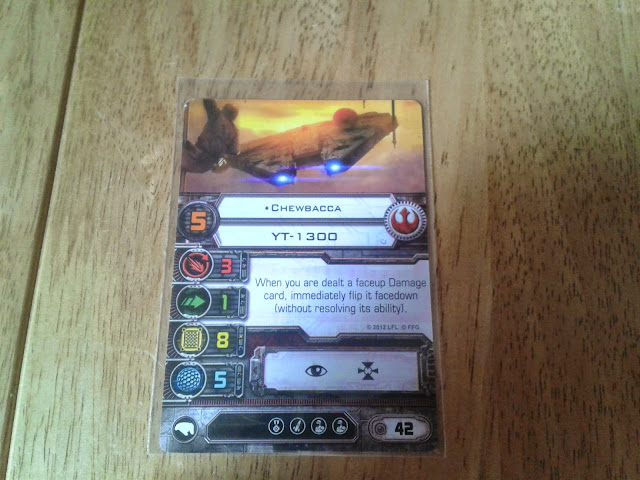 He has the actions of Target Lock and Focus, and I am sure you can see the increase in stats from the smuggler.  Also the increase in points! he is a substantial jump, but he is solid.  Chewie is you tank, with his ability to ignore Critical damage he can soak hits up, and with a good load out becomes expensive but effective.
The load out I like for him is.... 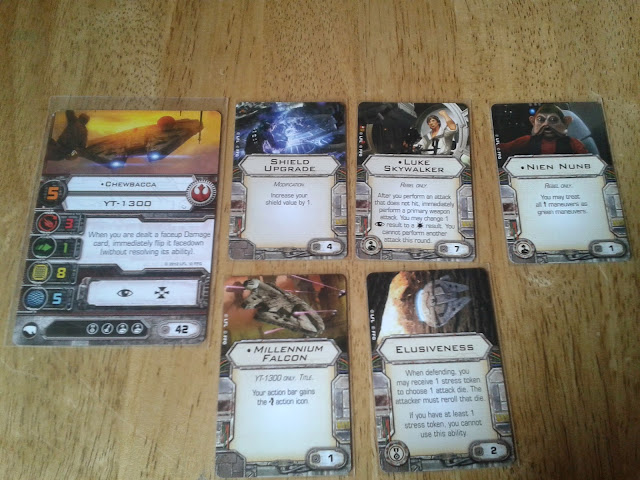 A shield upgrade, it just adds to his damage soak ability, combine that with the Millenium Falcon Title it gives his action bar Evade, so he can use that as with only one agility dice its not dodging much!  Now combine that with the Pilot talent Elusiveness, which when defending you can take a stress token to make you opponent re-roll an attack dice.  Again increasing your chances of survival.  Now to get rid of that stress you have Nien Numb, treats all straight moves as Green.  Being Turret armed means you don't have too worry too much about your own arcs. Luke sits in the gunner chair adding an offensive punch, so if you miss or the enemy evades your first barrage luke can fire again at them, and change an eye result into a hit as well! so you hit hard and take damage well. a solid build, expensive at 57 points but a good one!.

Next we have Lando a solid pilot skill of 7 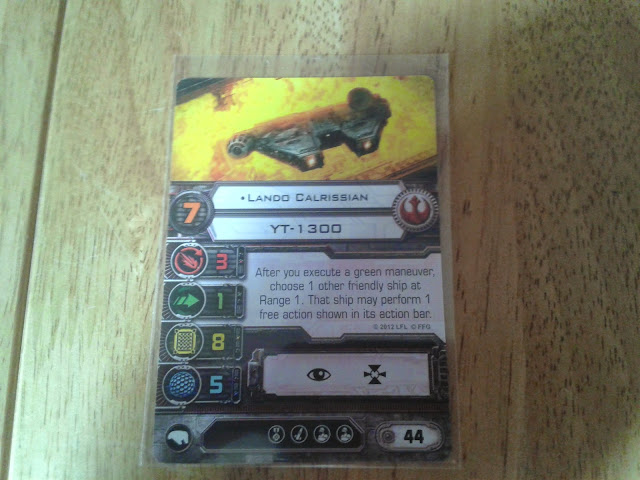 Landos ability is more of a support, after you perform a green manouver a friendly ship at range 1 can do a free manouver listed in their action bar. 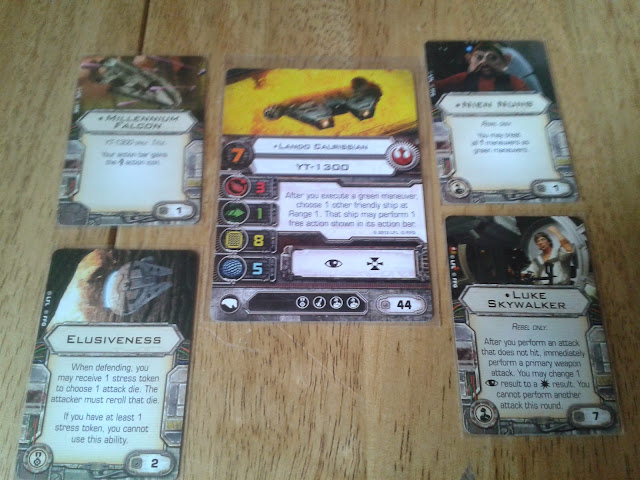 combine that with Nien Numb again so going forward is always green and your throwing out actions to your pals.  The right build and they can bounce things all over the place!  Lando comes with luke again for more punch, the falcon title to evade and elusiveness to help try evade combined again with landos ability and Nien works well.  not as pricey as Chewie at 55 points, he has his place in the right list for sure.

Now for the main man, my favourite character from Star Wars Han Solo, he is just as bad ass in this as he should be!  Rocking in at pilot skill 9 Han is going to shoot first most of the time. 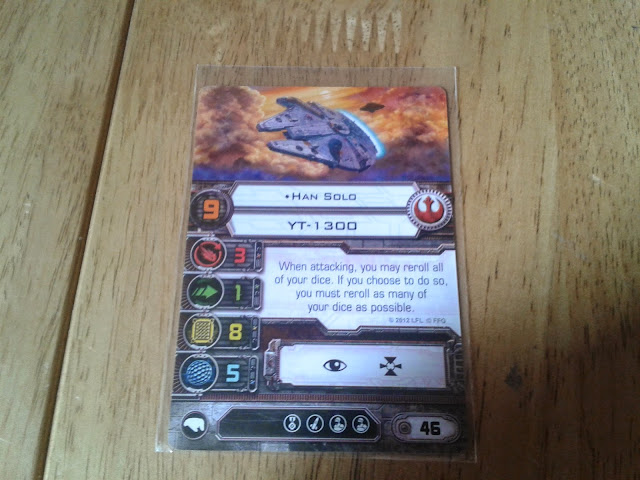 His ability allows you to re-roll your attack dice if you don't like the roll.  Roll 3 blanks? just reroll the lot.... but roll 2 hits... gotta judge if you want to risk that re-roll as you have to do all the dice!

Han fully tooled out is a beast! I have gone for this loadout on him.... 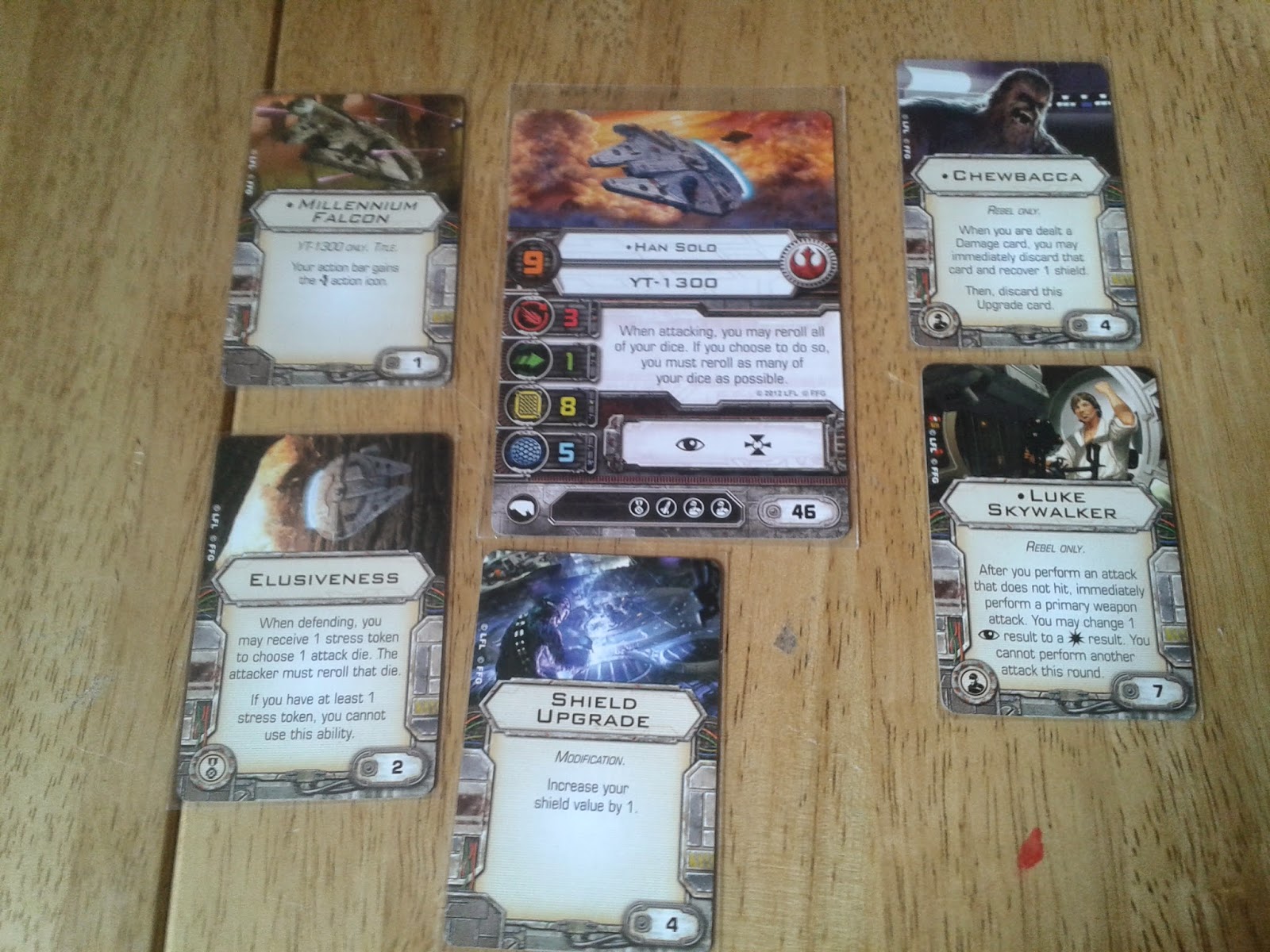 Comes with the usual Falcon title, Elusivness and shiels upgrade formore survivability, plus Chewie in the crew to ignore the first face up (critical) damage card you get, and luke as well.  Now combined with Luke is where things gets really nasty for Hans enemy...... Han rolls his dice, he decides to re-roll, gets 3hits, great!.  The enemy rolls 3 evades, booo, so then luke kicks in and attacks again.... and yes you can use Hans ability there again to re-roll! Its a slid reliable damage output you should chew through things like TIE fighters.  It is an Expensive build though at 64 points though.

A slightly varied build I like is this one.... 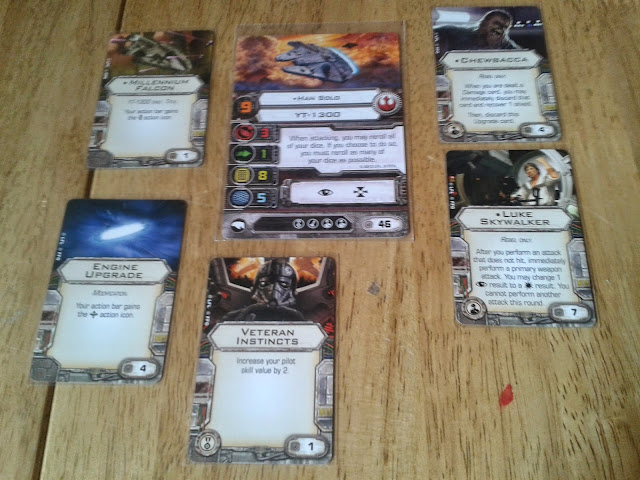 We replace Elusiveness with Vetern Instincts making Han Pilot skill 11! and replacing the shield upgrade with the engine upgrade giving the ship a boost action.

There are some great combinations you can do with these pilots, get out there and try some of your own
Labels: Fantasy Flight Games Star Wars Xwing