I love the Stug, I'm just putting that out here now, as an armoured fighting vehicle it just looks cool, you can keep your fancy turret having Panzer mark 4`s, just give me the Stug! or to give it its proper title, the Sturmgeschütz III , it was Germany's most produced armoured fighting vehicle of the war.  It is also a mainstay of many German (and occasional her allies) lists in Flames of War, used on both fronts. 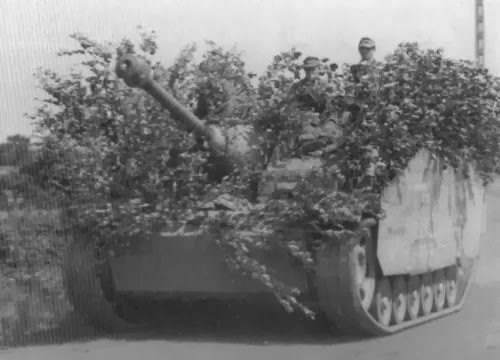 Included in part of the Open Fire starter set there are some plastic Stugs, and when some of these came my way I couldn't wait to put them together.  They  come like this on the sprue: 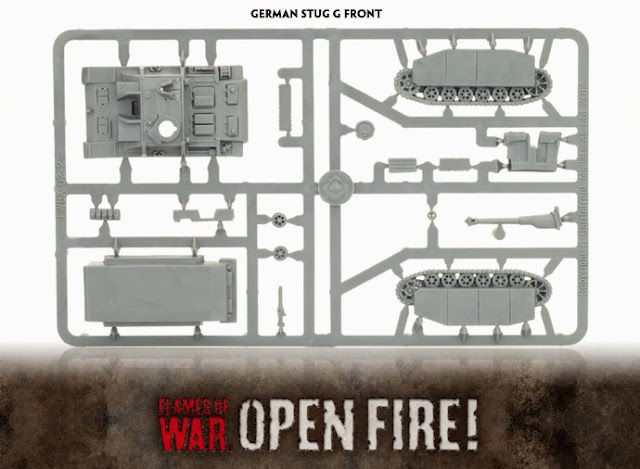 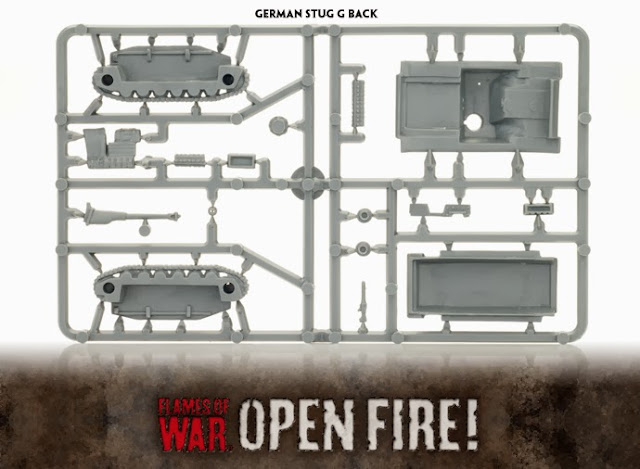 Thanks for the images, Battlefront! <3

Really easy to assemble, there was no cleanup and it went together so smoothly. There where options for extra bits of stowage and spare track which was a nice touch I liked. The detail is nice, and it takes the paint really well, here's a look at mine done quickly to tabletop standard and I'm no master painter but it has come out nicely. 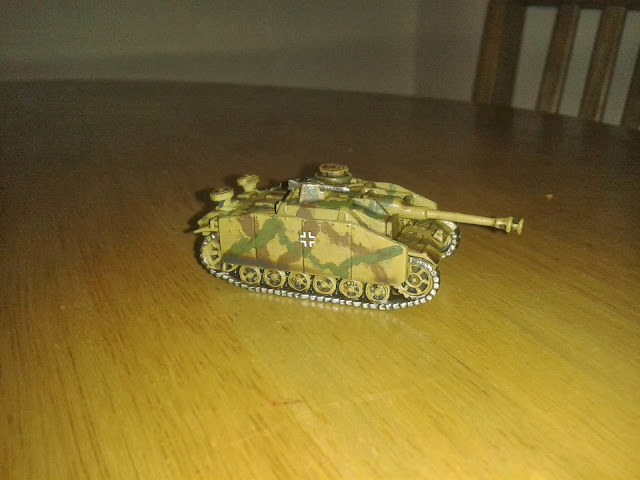 Fun Stug Fact :  A rotating cupola with periscopes was added for the commander for Ausf G. However, from September 1943, lack of ball bearings (resulting from USAAF bombing of Schweinfurt) forced cupolas to be welded on. Ball bearings were once again installed from August 1944. Shot deflectors for cupolas were first installed from October 1943 from one factory, to be installed on all StuGs from February 1944. Some vehicles without shot deflectors carried several track pieces wired around the cupola for added protection. (C- This gives me a grand hobby idea...)

I was rather pleased but after seeing the picture earlier of the mobile bush that the crew had turned their Stug into i thought why not give it a go, if it works for this chap it can work for me! 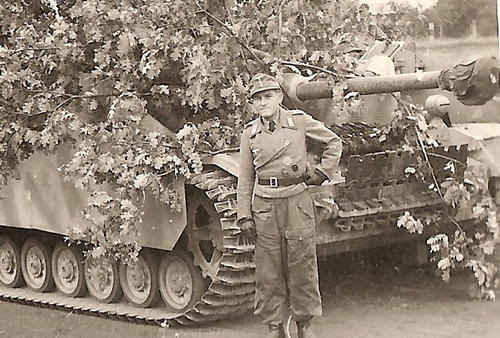 Fun Stug Fact : 100 StuG III Ausf. G were delivered to Romania in the autumn of 1943. They were officially known as TAs (or TAs T3 to avoid confusion with TAs T4) in the army inventory. By February 1945, 13 units were still in use with the 2nd Armoured Regiment. None of this initial batch survived the end of the war.

With the addition of some simple hobby bits in the form of some Landscape Scenics Lichen that my dearly beloved wife had picked up on some whim for me i turned it into this! Perfect for lurking in those Normandy hedgerows. 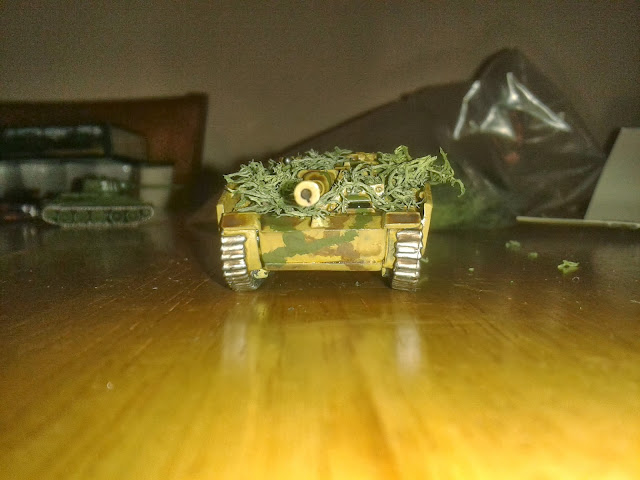 Fun Stug Fact : StuG IIIs were also exported to other nations such as Bulgaria, Hungary, Italy, and Spain. 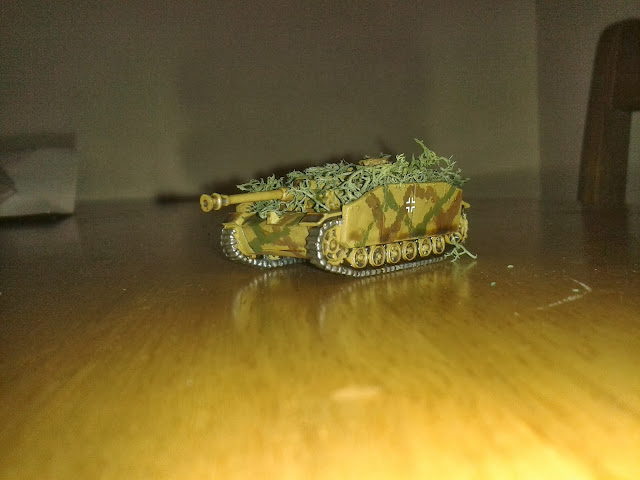 Fun Stug Fact : Many German Sturmgeschütz IIIs were stranded in Yugoslavia after the war. These were used by the Yugoslav Peoples Army until the 1950s 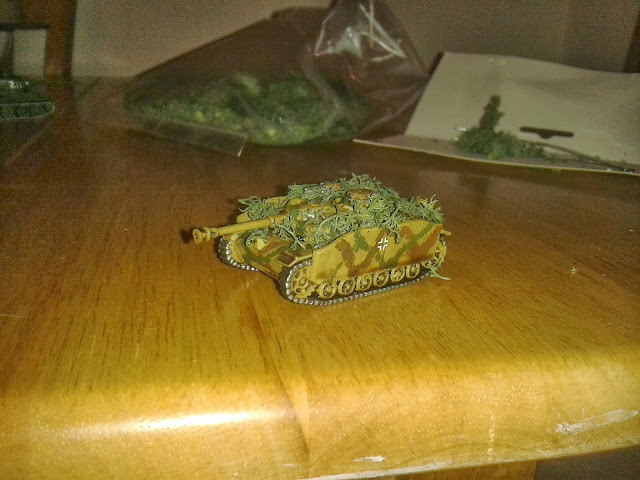 Fun Stug Fact : After the Second World War the Soviet Union donated some of their captured German vehicles to Syria, which continued to use them along with other war surplus AFVs (like long-barreled Panzer mark 4s and T34-85`s) during the 1950s and up until the War over Water against Israel in the mid-1960s. By the time of the Six Days War all of them had been either destroyed, stripped for spare parts, or interred on the Golan Heights as static pillboxes. (C- If I didn't know any better, Mart is just making all of this up. But he does know his history) 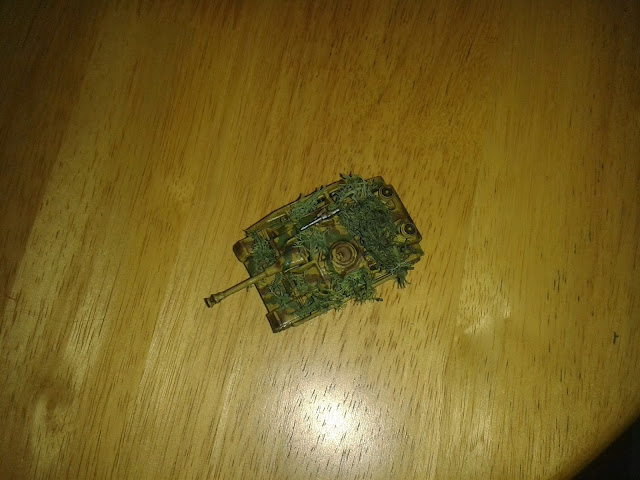 Overall I love this kit, its simple to put together looks great paints well, is used in many lists (C- Not for the Finns! M- cough cough Sturmi.... as the Finns called them) and is nice and light in plastic form, good job Battlefront, I cant wait to get hold of an Open Fire set of my own if this is a sign of how good the plastics are!
Labels: Flames of War germans