Ah, a biplane. How cute!  I say that this is Finland's Fokker CX because it was a slightly different aircraft, performance-wise, from the ones the Danes had. Check out the wiki page for the Fokker for more information. Not like these differences matter a drop in this game.

So, onto the model itself. Rather pretty, and do remember I am biased towards aircraft. 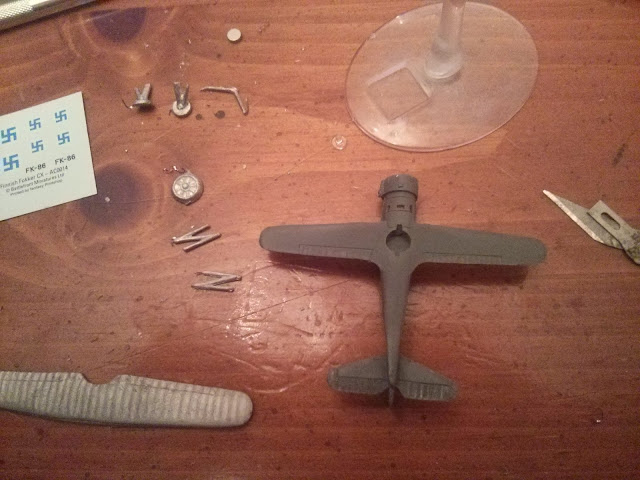 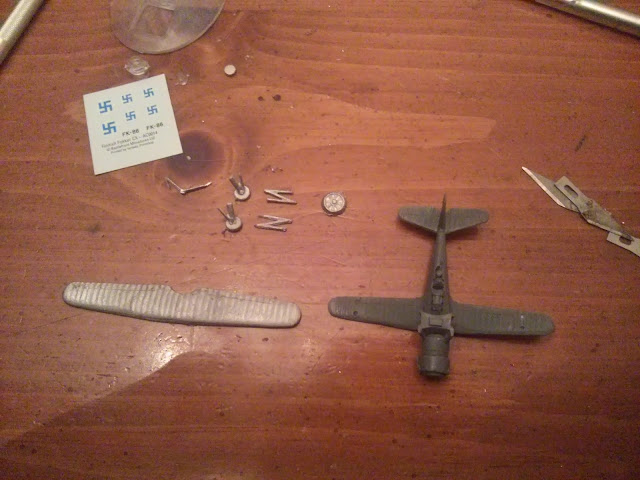 You get the standard stuff: your one plane (in pieces, of course), two magnets, the flight stand, die (not pictured because it went straight to the dice box), and decals. Splendid. The more experienced Flames of War hobbyist will note that this sucker has a lot of parts. It's not just slapping on a nosecone, MGs, and some bombs. You have the upper wing, support struts, a support strut for the wheels, two wheels, and a nosecone. That big hole where there should be a little one for the aircraft stand stumped me, because 1. I haven't put any of the Vietnam helicopters together, and 2. I'm an idiot. So, if you're clueless like me (or happen to make the occasional mistake), there's the answer. No bombs, interestingly enough, even thought you can drop them in the game and the real life ones could carry 2-4 bombs.

How hard could the assembly of this kit be?

Damn difficult, I'm learning. While cleaning the mold lines (which are prevalent, but nothing to ruin the model. Be careful you don't obscure some of the sculpting recessed lines when cleaning the model), be super careful about what's fragile about the resin body, which is anything on the edge of a wing or stabilizer. Case in point... 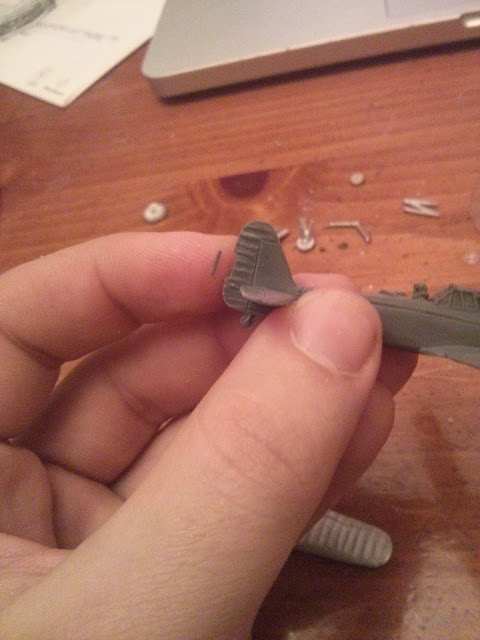 Yeah, Bummer #1. Luckily I was able to get it glued back on without attaching the broken piece to my finger.

Next up is seeing how to do this wing assembly. There are holes in each wing that the support struts fit into, but the trick is making sure the wings match up properly. Here's what I mean: 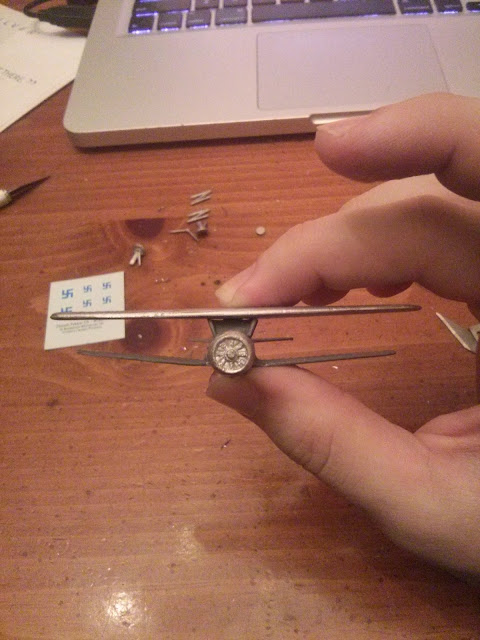 The left side (from your perspective as the reader) looks to be a bit thinner than the other side. No matter, nothing boiling water can't fix. This is resin, right? 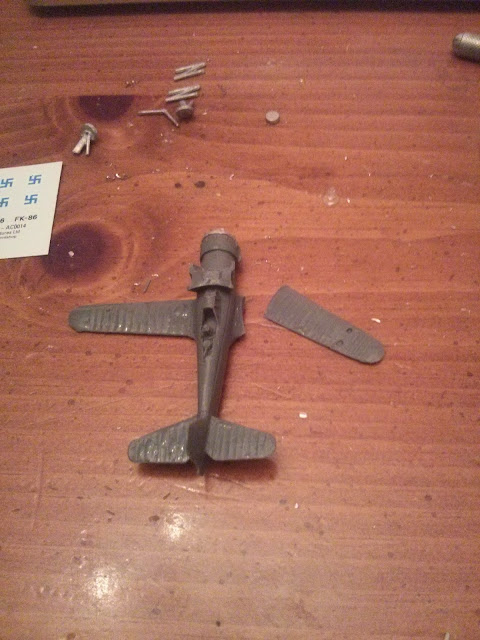 Bummer #2: It looks like the AA has gotten here already! The resin did break in such a way that it fit together nicely when re-gluing. It was an extra step that I didn't want to take. So, with the lower wings back together, I decided to take a file to that support bit on the cockpit that the upper wing fits onto. Now I have some control over how the upper wing fits. Splendid! The problem still remains, and it's kinda chicken and egg: do you glue the upper wing on, then man-handle the support struts in there? Or do you glue the struts first, then the upper wing? Well, Battlefront is pretty good with assembly guides. Let's go give the Fokker's Hobby page a looksie.... Bummer #3 of the project.

Looks like we're going it alone. Not even a paint guide! Although by eye balling it I'm guessing it's Russian uniform for the green, and then yellows as needed. But, I'll get there! I still haven't gotten the second wing on. Time for a hobby enhancer, methinks.

After some trial and error, here is how I got the little so-and-so's to fit. I glued one of the two parts of the strut to the upper wing, then fiddle 'em around to make them fit on the lower wing. It looks pretty good... until you see the upper wing isn't resting on the fuselage of the plane. Whoops. Time to file the struts down a bit. It's not the best solution, but this seems to be what it takes to make it fit. Another option would be to just bend the struts in more, and cover the existing slots in the lower wing with some putty.

I'm giving up trying to make it a flush fit. It's easy to take material off, but one inch of draw on the file too much could ruing the struts beyond repair. So, I'm settling with the knowledge that the plane looks good from above. I did manage to physically push the wing forward so the post on the fuselage lined up with the slot on the wing, sorta. Judicious amounts of super glue can do wonders, and baking soda makes for an ace accelerator. 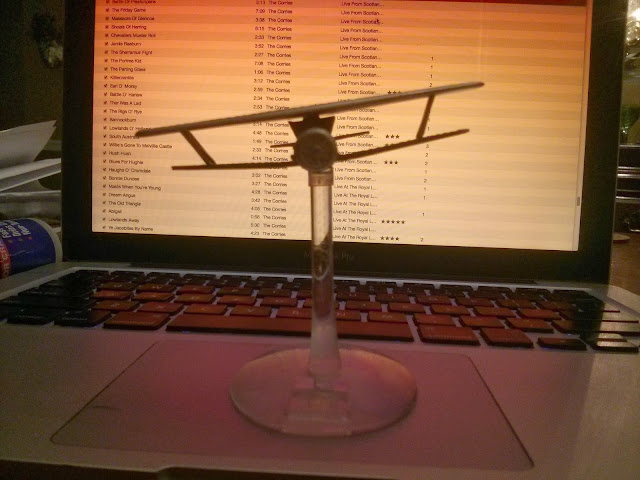 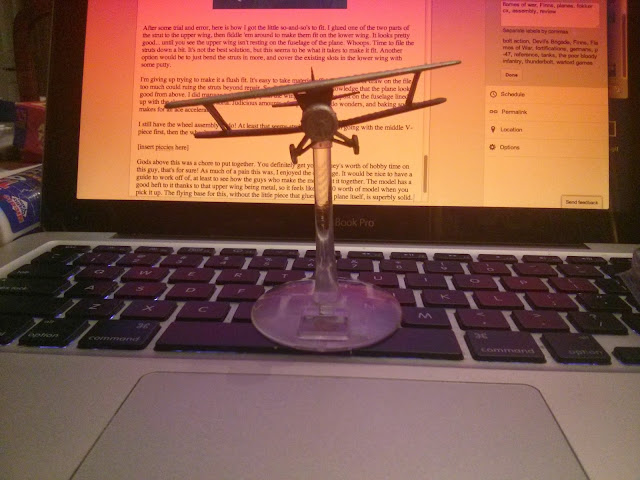 I still have the wheel assembly to do! At least that seems straightforward. I'm going with the middle V-piece first, then the wheels. 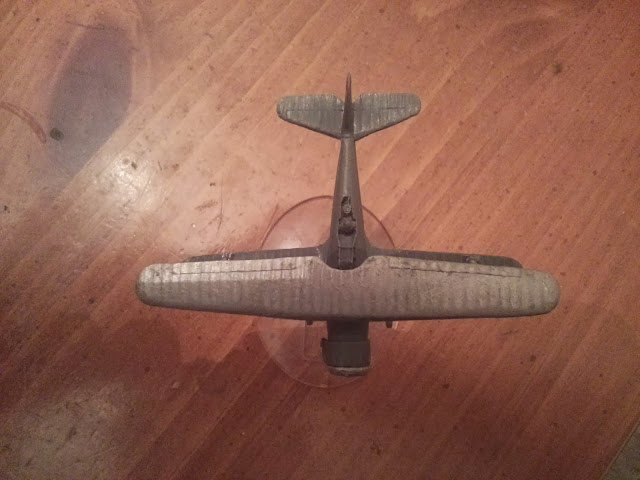 Gods above, this was a chore to put together. You definitely get your money's worth of hobby time on this guy, that's for sure! As much of a pain this was, I enjoyed the challenge. It would be nice to have a guide to work off of, at least to see how the guys who make the model put it together. The model has a good heft to it thanks to that upper wing being metal, so it feels like $17.50 worth of model when you pick it up. The flying base for this, without the little piece that glues to the plane itself, is superbly solid.

And I haven't put a drop of paint on it yet. You'll just have to tune in again for that! Y'know, while I wait for paint to arrive.