A Long time ago in a galaxy far far away we looked at Star Wars Imperial Assault from Fantasy Flight Games.  This model pack will replace the card token from The Twin shadows expansion, and add more to your game too, even if you do not have the Twin shadows, you can still get plenty of use from it. 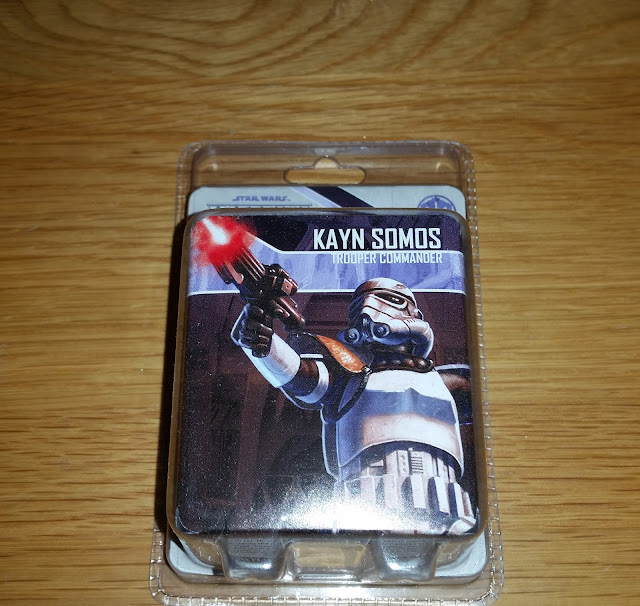 “Only Imperial Stormtroopers are so precise.”
–Obi-Wan Kenobi, Star Wars: A New Hope

The white armor of Imperial Stormtroopers is a symbol of the Empire’s might across the galaxy. These highly trained soldiers are the iron fist of the Emperor, crushing dissension and spreading fear everywhere. Some Stormtrooper officers even exceed their soldiers in ruthlessness, and few are more feared than Kayn Somos, the Stormtrooper commander stationed on Tatooine. With the Kayn Somos Villain Pack, you can bring this trooper’s powerful leadership and unforgiving methods to your games of Imperial Assault! 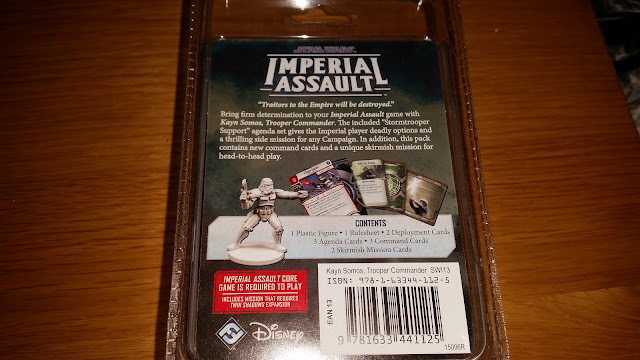 The Kayn Somos Villain Pack offers a sculpted plastic figure of Kayn Somos to replace the token found in the Twin Shadows expansion which is one I don't have. Of course, like other Ally Packs and Villain Packs, this expansion offers far more than a plastic figure. Three new missions expand both the campaign game and the skirmish game, while new Agenda cards, Deployment cards, and Command cards invite you to pursue cunning new tactics in any mission. 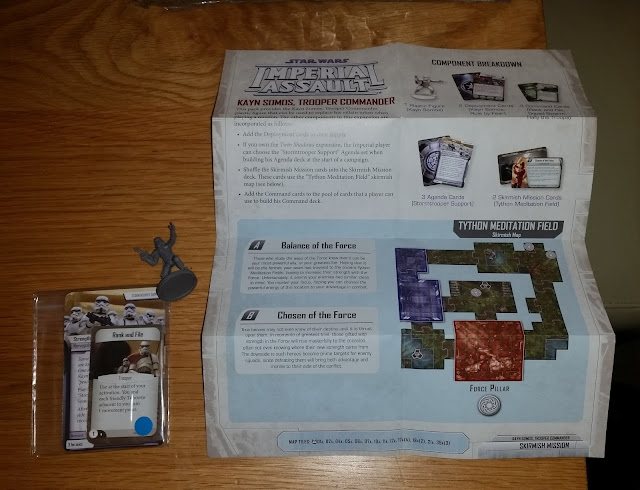 Inside as always with the mini expansions you get some cards, and a new map layout for some more skirmish missions, and the figure. 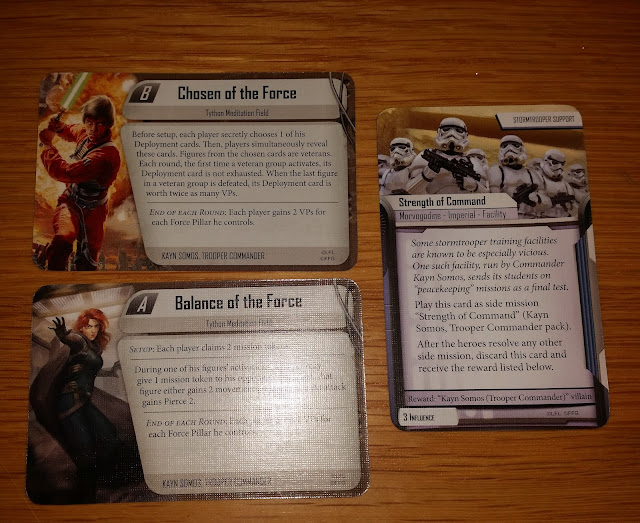 Two more skirmish missions will really help give more variety and life in the game and give you plenty of replay options too.  There is also a campaign mission where the imperial forces can get Kayn as reinforcement. 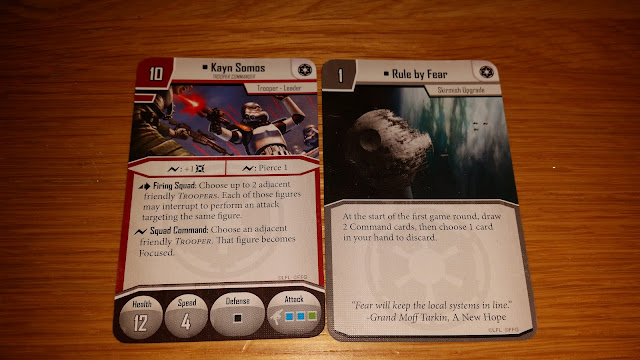 He is certainly worth getting as well, as he has the same card for skirmish and campaign.  12 health is solid and a good average speed of 4 will keep him in the game.  A black dice for defence means he's got some armour, and a blue blue green for attack can give you some solid ranged firepower.

He can surge for an extra damage, and surge for pierce 1 to get through armour.  He also has the surge ability Squad command, where you can choose an adjacent friendly trooper who becomes focused, and that's great for maximising damage output.

his action ability is firing squad... you can choose up to 2 adjacent friendly troopers, and each of them can interrupt and perform an attack targeting the same figure.  That's huge! an extra attack when they didn't expect it, and even better if you surge and give one focus as well... Keep him with his troopers and he will serve you well!

Rule by fear is a skirmish upgrade that at the start of the first round lets you draw 2 command cards, but you have to discard 1. Still its great for getting that advantage early on. 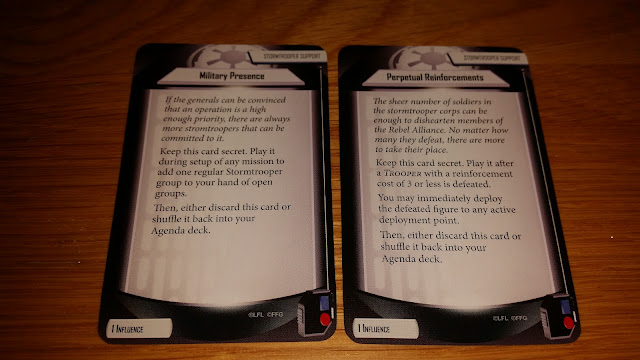 some new support cards for the imperial player provide some new options, all themed on Stromtrooprs aptly enough. 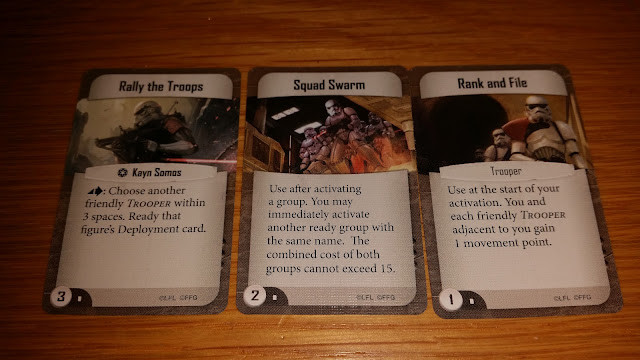 Some new command cards will provide options for skirmish, once more mainly storm trooper themed.  Rally the Troops is Kayns own card, and lets you as an action choose a trooper in 3 spaces and ready them.  Squad Swarm works after you have activated a group, and lets you immediately activate another ready group with the same name.  rank and file lets you and each adjacent friendly trooper gain a movement point, great to get going quickly! 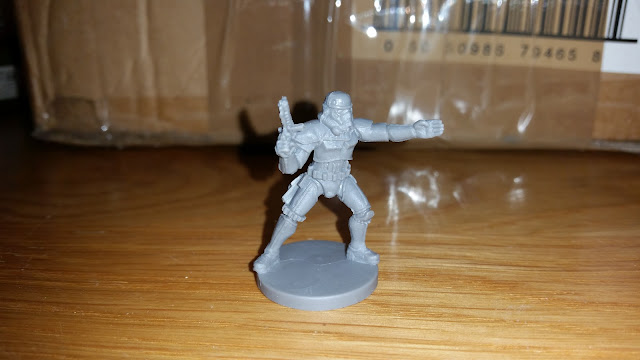 The model is great, a little tiny bit of flash, but nothing you cant fix, and not a problem at all if you do not intend to paint him. 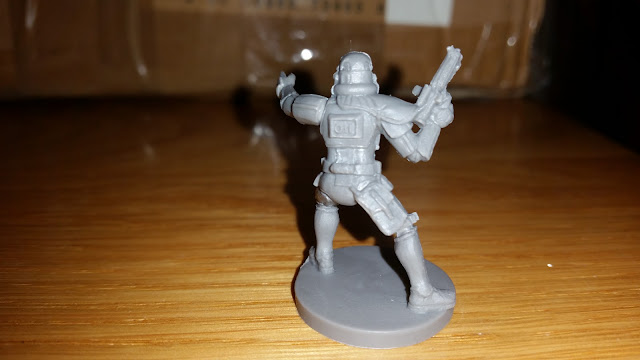 Another good pack, he will certainly help boost up the poor lowly stormtroopers, who to me are the iconic imperial soldier, not elite like the royal guard, but the poor grunts in the field, as they really do need it! plus more missions, more goodies for skirmish, well worth getting!

Head on over to your local game store and grab yourself a pack to get a load more Imperial Assault goodness to play!

Come and join us in all sorts of gaming chat in our Facebook group here, and come follow us on Twitter @rollyoursix and Instagram join the chat, and tell us about your games!
Labels: Fantasy Flight Games Imperial Assualt