In the shipyards of the Empire today we are looking at fitting out our Victory class Star Destroyer for battle.  Using only the cards that come in the expansion pack, and looking at what role she can fulfil in your fleet. 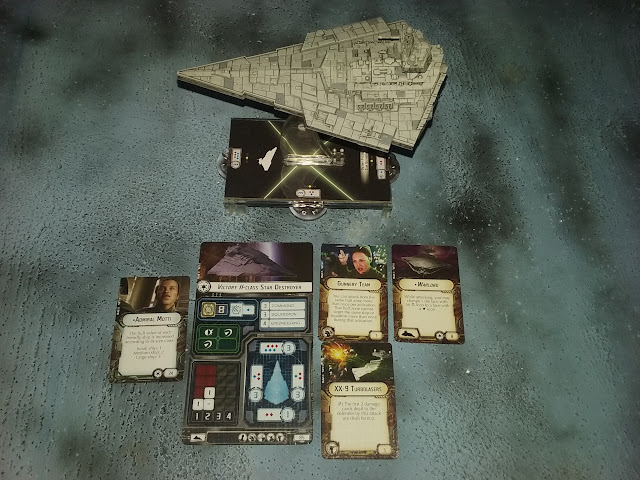 Here is the build I like for her, with an optional Admiral as well, that you can of course swap in for any other Admiral you may like.
Lets take a closer look..... 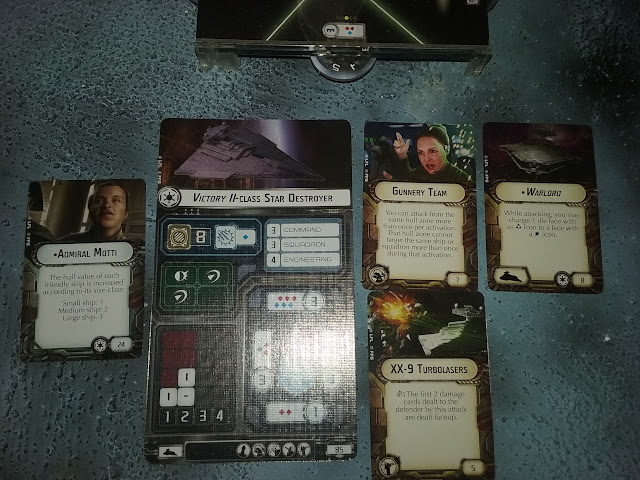 Admiral Motti is a solid but optional choice, he works well in a large fleet and would increase the hull value of your victory by 2 making her a hull 10 ship and able to take a beating.

The Victory II is my favourite, due to her low speed having black dice on board is hard to use, and I would rather be firing as soon as possible with the long range red dice armament in the front arc.  The blues provide more punch just giving you that extra range over the black dice that rebels can skirt around.  With a wide front arc and plenty of firepower at range, you want to point your nose at the target and advance.  Combine this with Gunnery team that lets you fire twice from your same arc, and it means you can cover more board with maximum firepower levels.  XX9 Turbolasers are there to maximise damage by triggering from critical hits to deal two face up damage cards instead of one.
Warlord allows you to convert the target symbols to an extra hit as well to just maximise damage.

I love the Victory, she is not subtle at all, just move up, (you wont be doing it too fast) point your nose at something and pummel it.  A pair of them are frighteningly efficient when they combine their fire on something and when both are pointing at something it tends to die, or be crippled very quickly.