Today we look at getting a build together for the venerable Y wing, what to take, and what role she can perform in the fleet.  We will as always only be using cards that come in the pack. 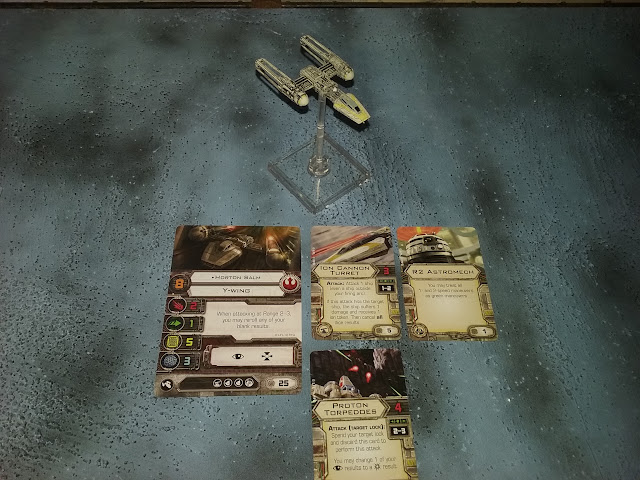 Horton Salm is my pilot of choice for the Ywing, with a high skill, he is moving later in the game and shooting earlier giving you a bit of an edge, and his ability to re-roll blanks at range 2-3 almost gives him a free target lock.

He has the R2 Astomech to make his speed 1 and 2 manoeuvres green which is handy on a ship that has a speed 4 red K-turn, and a speed 4 red all ahead.

He has a set of Proton Torpedoes just to provide some punch when needed at range, and with his ability he can re-roll the blanks on them if needed.

His last upgrade is the ION cannon turret.  This provides a 360 degree fire arc, and will inflict a damage an ion token if it hits.  When your opponent has an ION token it can only drift forward at speed 1 instead of a normal manoeuvre for a turn.

since the Ywing cant go at speed 4 without putting a stress on the ship, you cant go full speed with Xwings or Awings, but you do not need to, come in slower behind them, hit your enemy with the ION cannon so the faster more powerful ships can know where they will end up then they can get in behind them and finish them.  The torpedoes are there for targets of opportunity.  If you have a ship cross your path that you do not need to ION the normal 2 attack weapon can be used, but why use it when you have the Torpedoes, they can hit hard, get a re-roll from Hortons ability and can be a nasty shock.  When she catches up the action the Ywing can still sit in the middle of it, with high shields and a 360 degree firing arc, you can ION targets, then manoeuvre to get yourself behind them and fire.