Today we drop out of hyperspace into the Star Wars universe for another look at the latest wave.  This time the Protectorate Starfighter for the Scum and Villainy faction.

Also known as the “Fang fighter,” the Protectorate starfighter was a fast and sleek Mandalorian craft custom-built for fighter combat. The Protectorate Starfighter Expansion Pack brings this aggressive ship to X-Wing™ as one of the most potent—and most deceptively simple—vessels in the Scum and Villainy fleet with three attack and three agility. Although the ship has no shields, its pilots favor aggressive approaches, meeting their foes in deadly head-on charges. In addition to its pre-painted miniature, the expansion contains six ship cards and two upgrades. 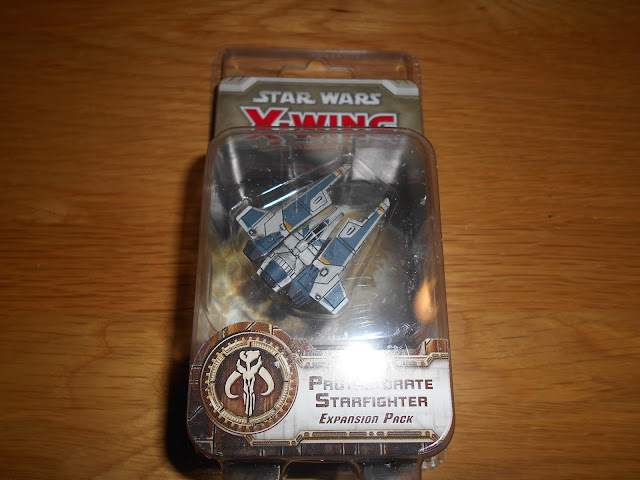 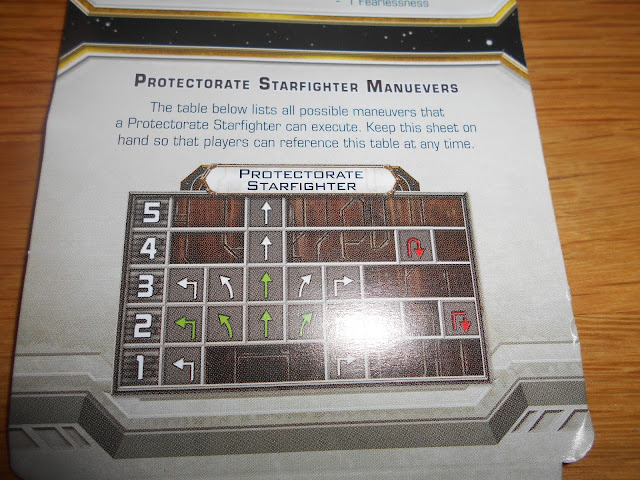 Firsly looking at the dial... shes fast.... VERY fast... and with both a K turn, and talon roll, she can flip around and be on your tail or out of your arc before you knew what was going on! 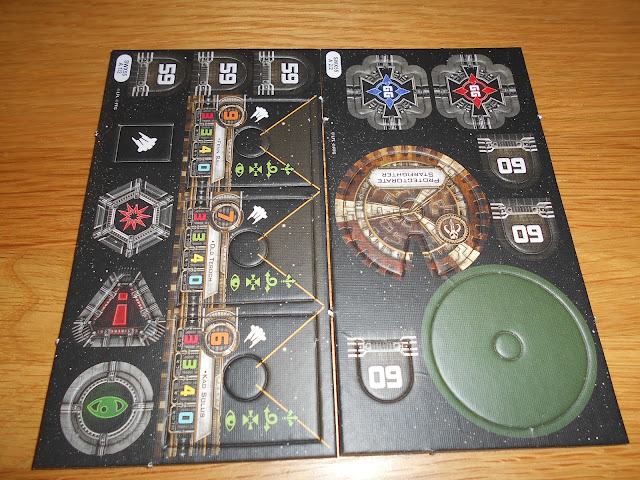 As always plenty of lovely quality tokens, all you need in fact to play. 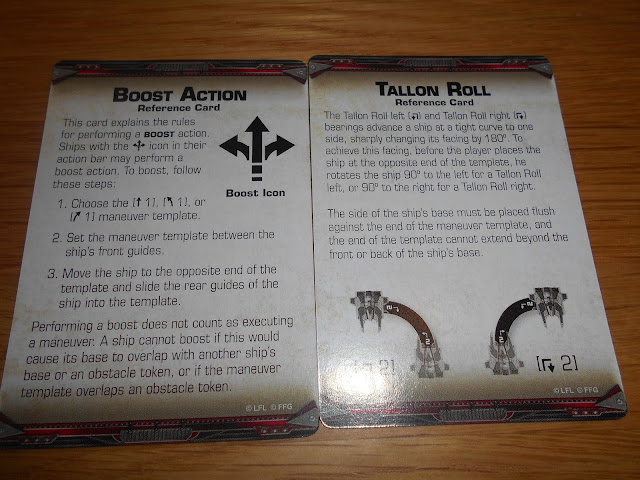 You get reference cards for the Boost Action, and the Tallon roll, you can really see how nimble this ship is, but then its needed! she has no shields. 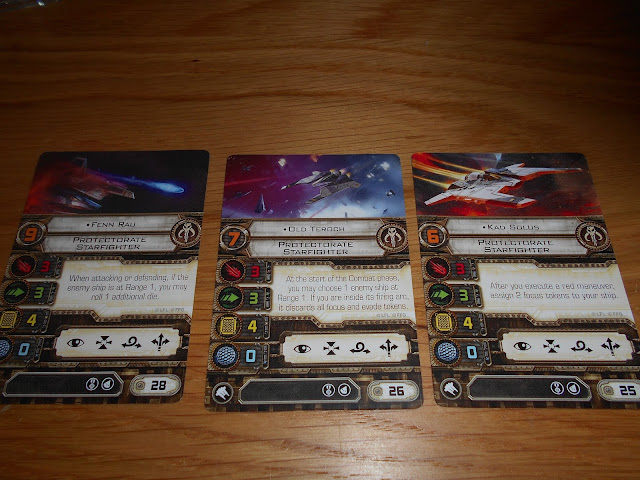 Her stats are 3 firepower which is very nice, 3 agility, again really good, 4 hull average, and no shields, so you will need to be careful with her.  Her action bar gives you the focus, target lock, boost, and barrel roll actions.

Pilot wise you get a really good selection in the box with the skill 9 Fenn Rau. He lets you roll an extra dice when you are attacking OR defending at range one making this a 5 attack dice ship at range 1.... you want to get up close and personal with him!

Old Teroch can force an opponent to discard their tokens limiting their effectiveness.

Kad gives you two focus tokens after you perform a red move, so its in a way similar to getting an action still, and with two you can use one on offence, and one on defence! 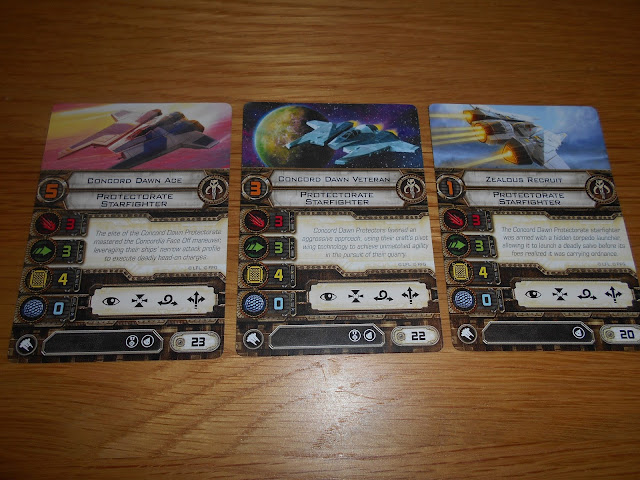 Then you get 3 generic pilots of varying skill levels. 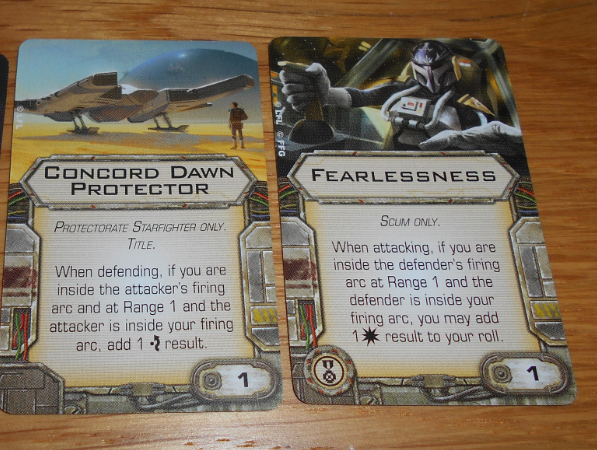 there are only 2 upgrades in the pack, the Concord Dawn Protector, which if defending in arc of an enemy and range 1 you can add an evade result, of course combine this wit a pilot who likes to be in range one......

Fearlessness again is another great addition for those pilots who like to be at range 1, when attacking at range one and if you are inside the defenders firing arc you can add a hit result, combined with Fenn, this makes him a MONSTER up close. 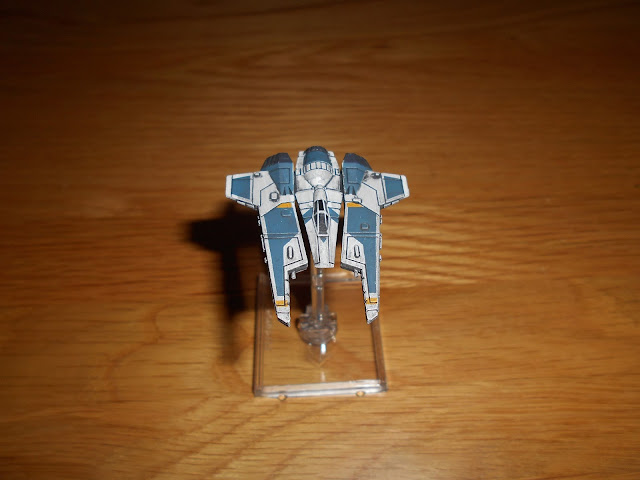 The ship itself is like all of FFGs Xwing models, excellently painted, and really well detailed.  You dont need any work on it out of the box.

This may not be upgrade heavy, but its a real fun ship to fly, and benefits from some in your face flying, closing range as much as possible, and hammering awat at range one, using your maneuverability to keep on target...

With an RRP £13.99, head over here to find your local game store and grab yourself one to add to your fleet and get involed in some villainy.