For Family Honor a Game of Thrones the card game expansion from Fantasy Flight Games.

Its been a while since we delved into A Game of Thrones the Card Game LCG 2nd edition, but now we are back, with the latest chapter pack... For Family Honor.

Im real excited to see this, as A Game of Thrones is my favourite card game.


No one would admit to being afraid—they were men of the Night's Watch, after all—but Jon could feel the unease. Four empty villages, no wildlings anywhere, even the game seemingly fled. The haunted forest had never seemed more haunted.
–George R.R. Martin, A Clash of Kings 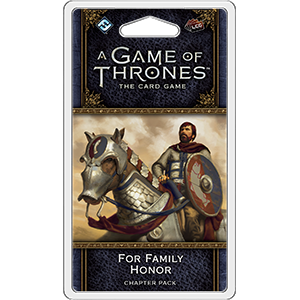 The War of Five Kings has already begun to shape the future of Westeros. Robb Stark marches on Lannister holdings, even as Tywin Lannister menaces the Riverlands from Harrenhal. To the south, Stannis Baratheon lays siege to Storm’s End and Renly Baratheon calls upon the might of Highgarden to break his brother’s armies. Yet in the midst of these kingly conflicts, another drama unfolds far to the north. From Castle Black, the Night’s Watch rides forth in a great ranging and ventures beyond the Wall to confront Mance Rayder and brave the fury of the wild. If they fail to defend the realms of men, the consequences could reach far beyond the icy heights of the Wall.
For Family Honor is the second Chapter Pack in the War of Five Kings cycle for A Game of Thrones: The Card Game. Throughout this Chapter Pack, you’ll find plenty of new cards that support the major themes of the cycle as you continue to follow the storyline of A Clash of Kings. New Kings and Crowns invite you to stake your own claim to the Iron Throne, even as other cards heighten the importance of loyal cards—the characters you can truly trust, the locations that would never fall, the events and tactics that you utterly control. Finally, For Family Honor introduces iconic characters to join the game, including Ser Edmure Tully, a House Tyrell version of Renly Baratheon, and Hot Pie.

Lets take a closer look at the cards.... 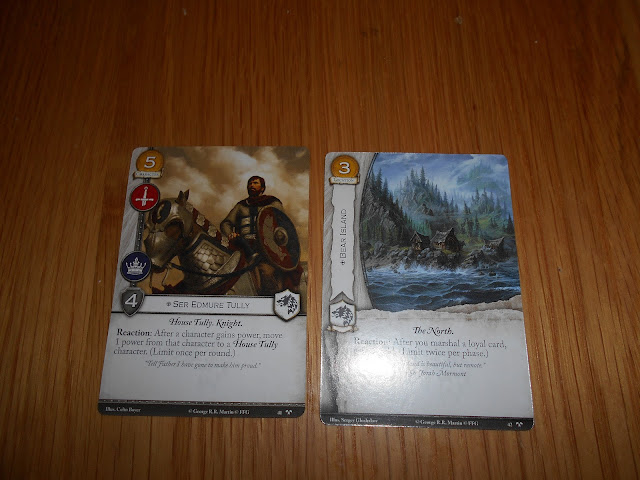 starting with House Stark we get Ser Edmure Tully, who is surprisingly House Tully, which is great as there almost enough Tully cards to make a themed deck with them, and they all have great synergies between them.  Edmure costs 5, is strength 4 with military and power icons, and his reaction lets you move power from a character that gains it, to a house Tully character. This is excellent to power up abilities and keep that power where you need it.

Bear Island is a 3 cost location that after you marshall a loyal character you gain a gold, so it will start to pay for itself, and f course provide you a bit more gold to work with. 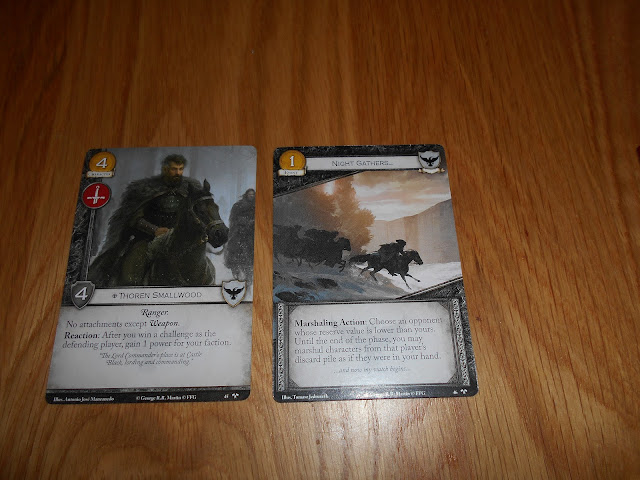 Thoren smallwood appears for the Nights Watch, with cost 4, strength 4 and only a military challenge icon.but if you win a challenge as a defending player you gain a power, and the Nights Watcha re on e of the best factions for defending.

Night Gathers is a 1 cost event and can be played in the marshalling phase.  You get to choose an opponent whose reserve value is lower than yours, and until the end of the phase you can marshal from their discard pile.  I really like this, feels like they are being "volunteered" for the wall. 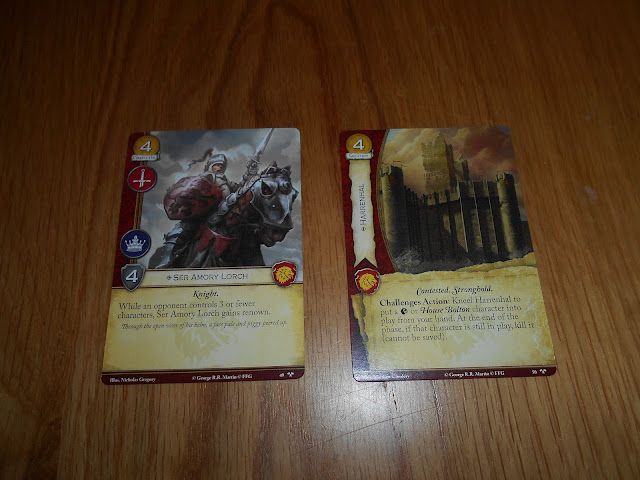 Ahh... my beloved (much to the wifes annoyance as shes a Stark fangirl) house Lannister..... We get Ser Amory Lorch.  cost 4 strength 4 with military and power icons.  He does have a handy ability though, that when your oppoenet has 3 or less characters he gains Reknown.

Harrenhal is a cost 4 location that has a challenge action. You can kneel it to put a lanister of a house Bolton card into play from your hand, but if the character is still in play you must kill it.  Under normal circumstances, i wouldn't use this, but it does proived the option if you desperate need some one out. 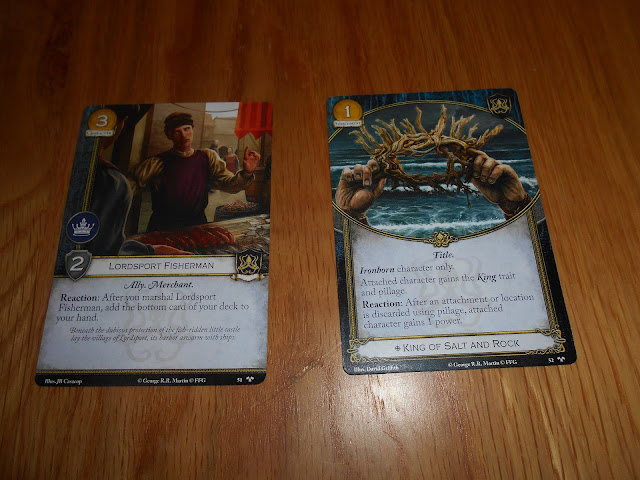 Greyjoy gets the Lordsport Fisherman, hardly a glamorous character, but he does have his uses..... at cost 3 for 2 strength with only a power icon he will not be doing too much fighting, but after you marshal him you get to draw a card from the bottom of your deck, so its the draw and damage soak you will put him in for.

King of Rock and salt is a 1 cost attachment that can only go on ironborn characters but it gives the characters the trait King, and pillage.... and pillage is nasty.  It also lets you gain a power after a location is discarded, so this on a character with Renown becomes terrifying!! 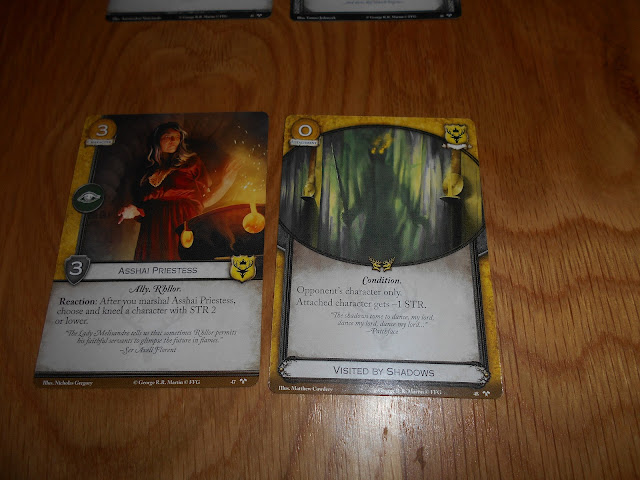 The Baratheons ge the Asshai Priestess, a 3 cost 3 strength character with intrigue. She also has a nifty ability, that after you marshall her you can choose and kneel a character with strength 2 or less.

Visited by Shadows is 0 cost attachment that can only go on an opponents character and gives them a -1 to their strength. 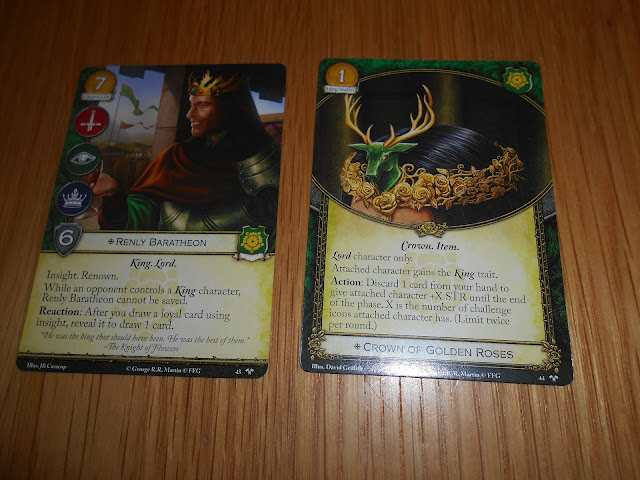 Renly makes his appearance for house Tyrell this time, as is strength 6 cost 7, with all the icons, insight and renown.  The only down side is if your oppoennt has a king card, renly can not be saved, so you need to make sure you take them down first.  He also has a reaction that can let you gain more cards, as if you draw a loyal card with insight you can show it to your oppeont and draw another card.

Crown of Golden Roses is a 1 cost attachment for Lords only and when attached gains the King trait.  It provides the action.... discard a card from your hand to give attached character x strength where x is the number of challenge icons the discarded character has.  This can be doen up to twice a phase, great to just tip things over in your favour by 1, or 2 but i wouldn't want to throw away 3 challenge cards on this. 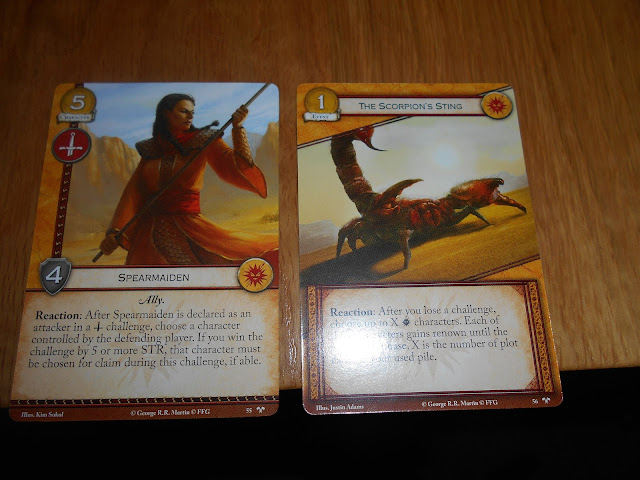 House Martell get the spearmaiden, with a strength of 4 cost of 5 and  only the military icon she does have a reaction to give her a bit more use.  After she is decllared as an attacker in a military challenge you pick a character from the defneders lineup, and if you win by 5 or more, that character must be the claim.  This makes her excellent for sending in with other heavy hitting characters so you can pick your kill.

The scorpions sting is a 1 cost event. After you lose a challenge you cna pick up to X of Martell characters. Each of them gain Renown until the end of the phase.  X is the number of plots in your revealed pile.  This can really power up the house late game. 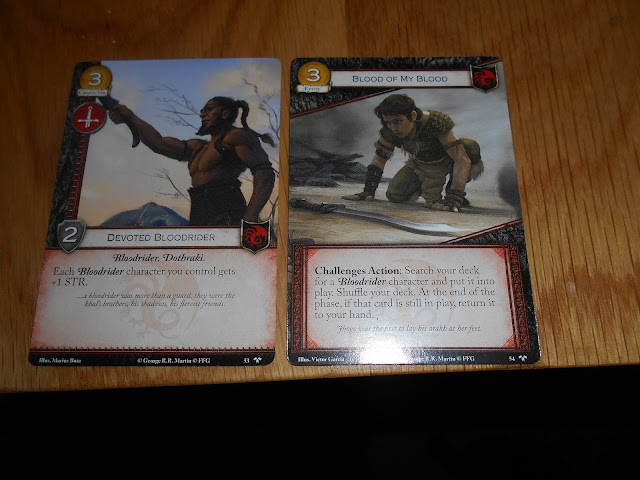 The Targaryens add to the Bloodrider theme with the Devoted Bloodrider.  He is cost 3, with a military challenge icon, and is strength 2, but each Bloodrider character you control gets +1 strength, making him excellent in a horde.

Blood of my Blood is a 3 cost event that has a challenges action.  You can search your deck for a bloodrider character and put it into play, then return it to your hand at the end of the phase. very handy if you cant quite afford to get a big character out this turn. 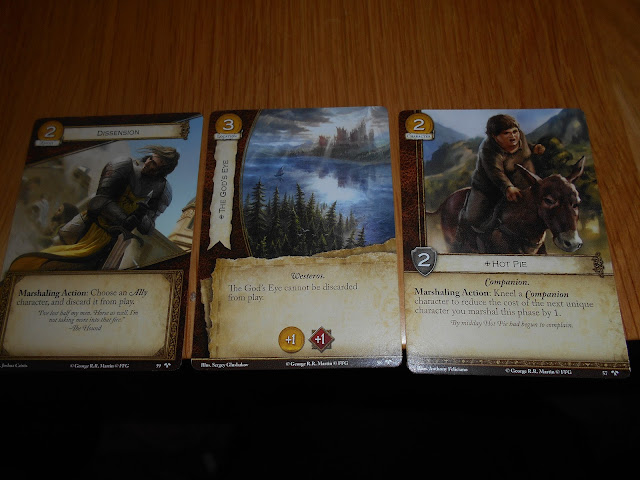 The Neutrals get some excellent choices.  Dissension is a 2 cost event for marshalling, where you can choose a card witht he Ally trait and discard it from play.

The Gods eye is a 3 cost location, and a must have for me! it can not be discarded from play and raised your reserve and gold by 1 each... excellent card.

Lastly Hot Pie.... 2 cost, 2 strength with no icons.  During the marshal phase you can kneel a companion character to reduce the cost of the next unique character by 1.  Pretty useful as he can kneel himself, and is also available for damage soak afterwards. 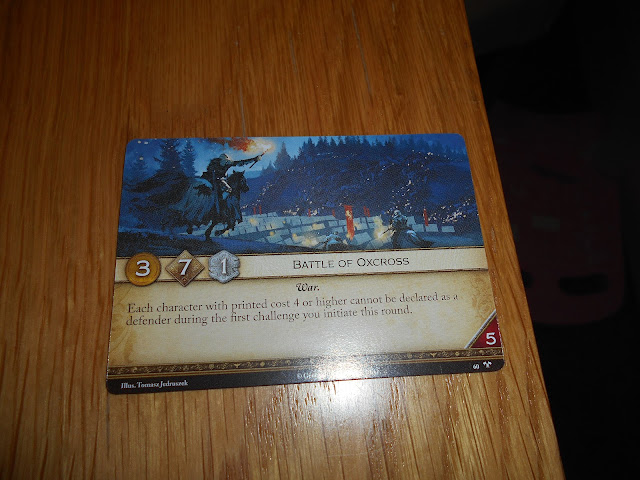 Lastly we have a new plot card... the Battle of Oxcross. Its a war plot with 3 income, 7 initiative, and 1 claim.

When you play it each character with a cost 4 or more can not be a defender during the first phase.  This lets you plan a hit that will be hard to stop, so make sure you play this when you need to.

Again, really happy with this pack, how its developing the story line, and plot, and adding more characters for theme, like bloodriders, and the Tullys.  Each new pack really makes me re-evaluate my decks, i mean look at Renly now.. for Tyrell hes quite the beast!

Really looking forward to getting these on the table!