Ahhh pirates, and combat on the high seas, something that has not been done enough in games, well not good ones anyway..... and not the naval aspect which i crave.  Now this is not a true simulation of age of sail naval combat, but it does do something that other games with ships in have not, and that is go into depth on the combat aspect..... more than rolling a dice anyway... This game is all about combat! priming the guns and blasting your opponent.  Now i have to say, i LOVE the cover art on this game, really is the kind of thing i have been hoping for in a naval game, sails, and broadsides of guns..... 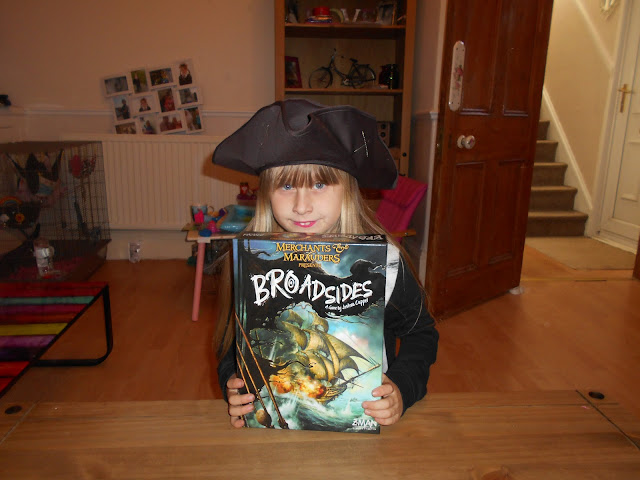 Set in the Merchants & Marauders universe, Broadsides is a standalone game in which the two opposing players command pirate ships engaged in a fierce battle over a profitable sea lane. Sinking the enemy or taking out their Captain and First Mate are the only ways to seize victory and survive the day!

The card-driven game system allows players a wide variety of actions, triggered by playing cards in a variety of combinations.
Aim: zero in your cannons using an innovative targeting system
Hold: Draw more cards to increase your versatility
Reload: Load a variety of ammunition types (chain shot for rigging, canister for crew, solid shot for hull) into a variety of cannons (reliable 18-Pounders, thunderous Carronades, deadly Long Nines)
Broadside: Blast all your cannons at once in a fierce but costly salvo
Sheer Off: Correct your course just enough to disrupt your foe's plans
Repair: Send sailors where they are needed to man the guns, patch the hull, or replace ruined sails
Additionally, your Captain's unique Reputation and a handful of drafted Dirty Tricks means that every matchup will be different from the last. Multiple tactical approaches to either of the win conditions means that you can tailor your gameplay to your strengths and your foe's weaknesses. Outthink, outplay, outgun, and sail away the winner! 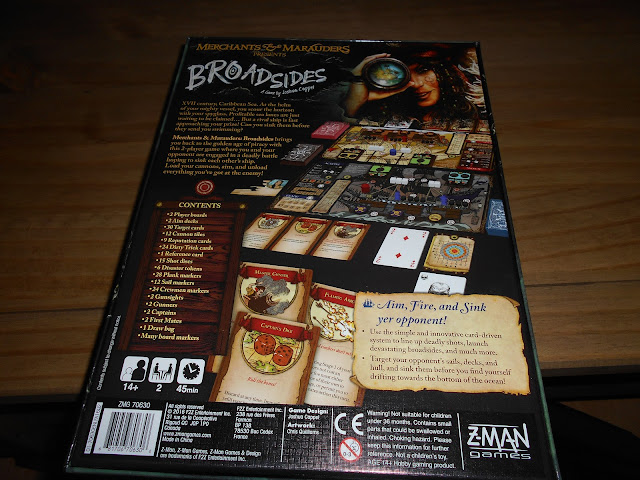 So you get a hefty contest list on the back, some nice art, and an overview.  They say ages 14 and up, may just be because of the small pieces, but i reckon younger gamers can grasp the basics, but may not have the tactical nuance to use the games system to their full advantage. It is 2 players only, and they say about 45 minutes, which is about right.. maybe a bit quicker when you get used to the system. 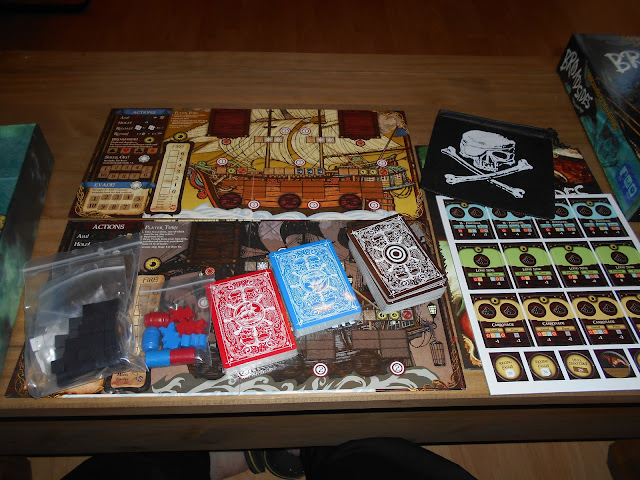 Once you pop out the goodies to have a look at, there is a fair amount inside the small box, two doublesided ship boards, so you can have the day/light ship, or the darker vessel... both are exactly the same functionally, they only differ for purposes of artwork.  Two player decks of cards, the red and blue, and these are really just playing cards but missing the royals.. these are used to lock in the firing solutions of the guns.  The brown deck is a mix of action cards, target cards, and player characters. 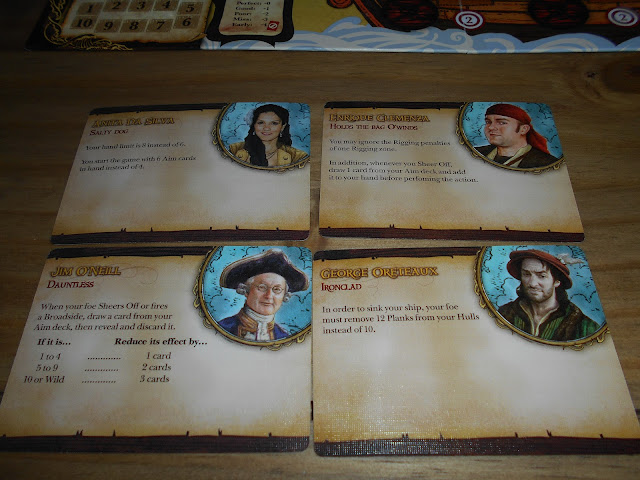 You can pick a captain, who adds an ability to your ship, and of course lets you get into a character a bit. 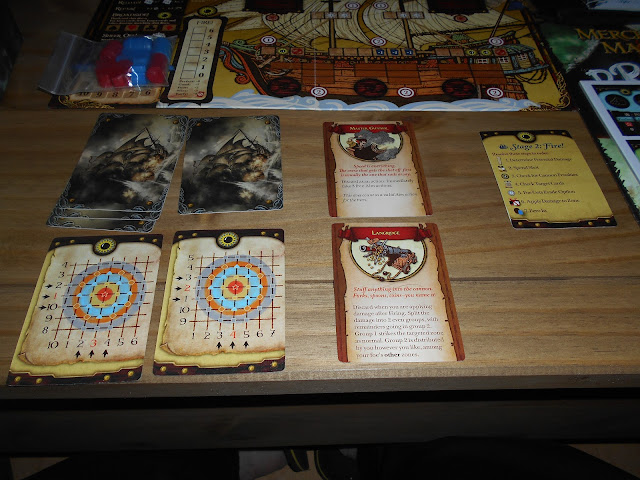 The art on the back of the cards.. lovely! and here we can see reference cards for each player, some action cards that you can play from your hand, luckily it tells you all you need to know on the cards, when to use them, how to use them and so on, so they are nice and simple and usually give you a  buff, or a detriment to your opponent. 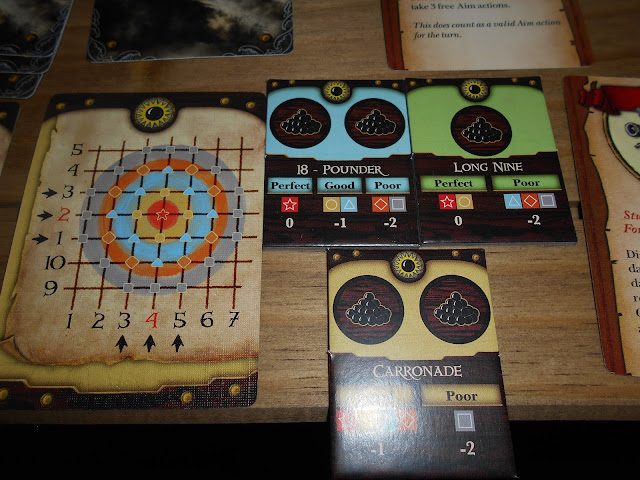 The Targeting cards are all different and give you zones of effectiveness which are relative to the guns you have chosen for your ship. For Example... an 18 pounder can only get a perfect shot (the most damage) on a red zone, so you would need to dial in your target with a 2 and a 4.  A good shot in yellow and blue bands.... and poor in orange and grey.  The long nine though has a better perfect Radius with Red and yellow, but a bigger poor radius, so there is no option for a "good shot" 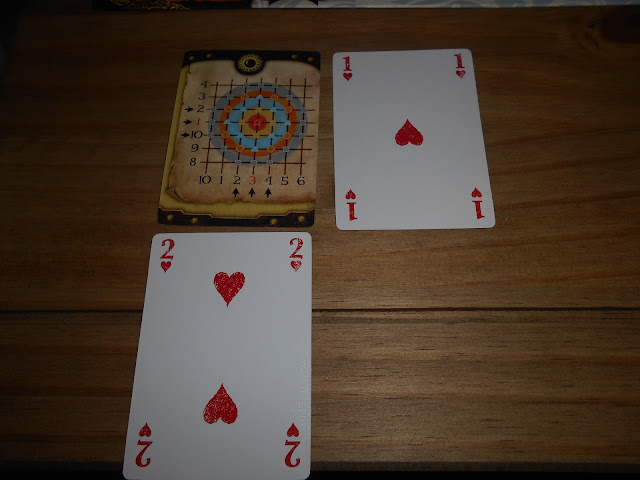 See here i have dialed in the target over two turns by playing one card for longitude, and one for latitude on my target.  With a long 9 this would be a perfect shot, but since this is for my 18 pounder, it will just be a good shot. 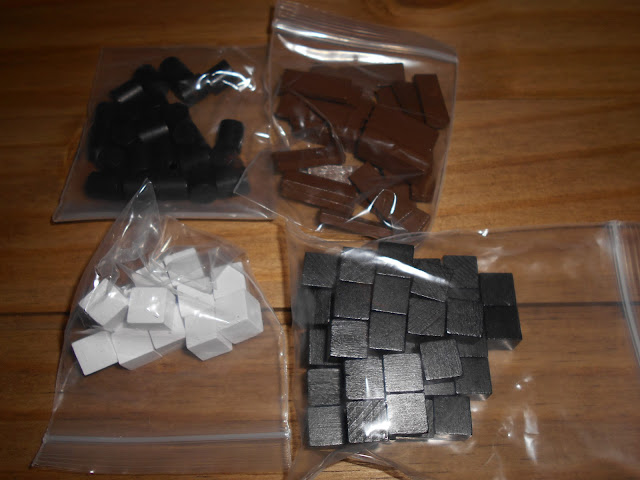 You get a ton of wooden components in the box, toeksn for crew, sails, hull, all the wooden tokens that are peeled away in battle. 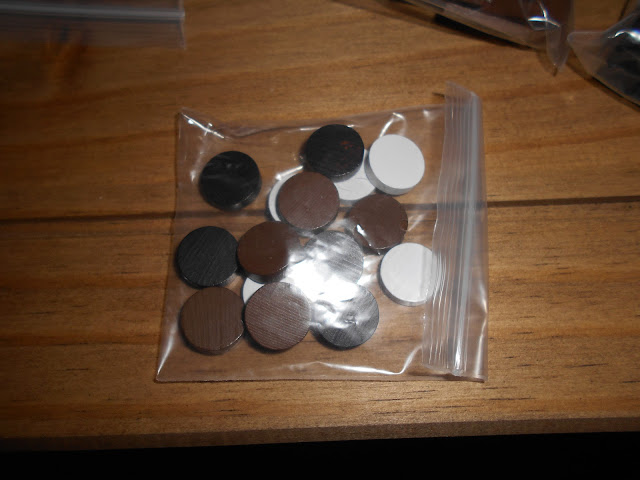 These discs represent the kinds of shot..... they are drawn blind and then placed on the guns... you have chain (good against rigging and sails) canister (good against crew) and solid (good against hull) so you need to make sure your guns are aiming at the best possible section to maximize damage. 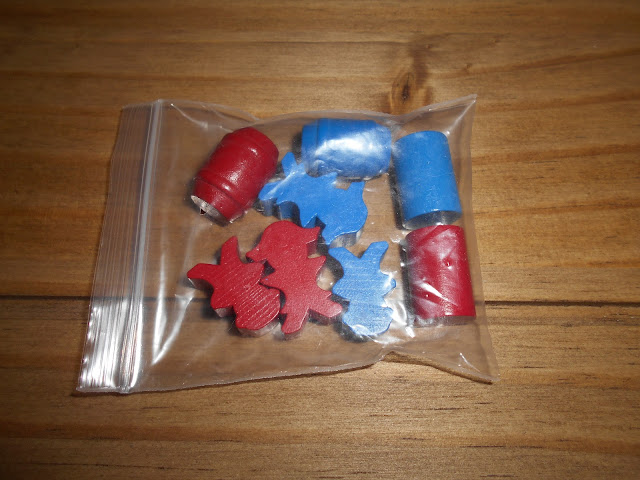 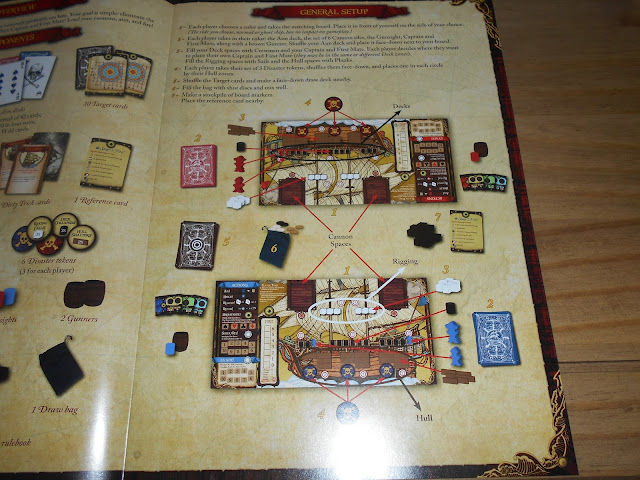 The manual is full colour, and will guide you through the setup, and play, which is fairly simple when you get going. 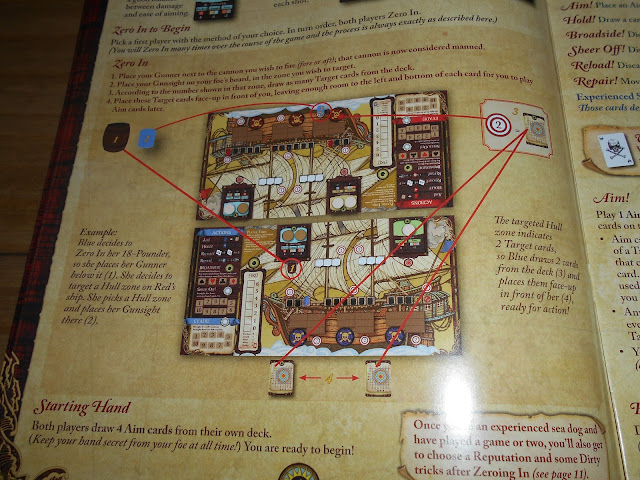 Theres a really good example of zeroing in in the book, so don't worry its not as complicated as it may sound.

You get a choice of actions on your turn, though one must Always be an aim action, which means laying a card by your targeting card to zero in. you cn always replace another card there.  You can then for your other action, draw a card, discard a flush of cards and shot discs to unleash a full broadside of both guns... or discard a straight (the cards are all standard playing cards) to force your opponent to discard cards from their hand, potentially messing up their targeting. Or you can discard to reload your guns, but then perhaps having taken damage you may want to move your crew around to repair.  There are plenty of choices to take, or you could play one of your dirty tricks cards........

Then you can fire... 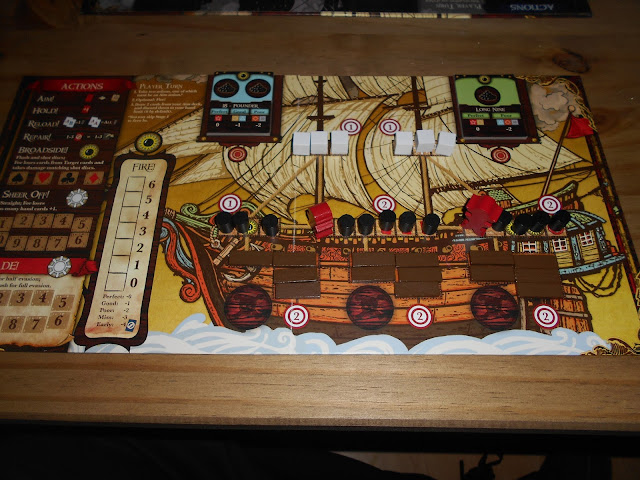 It does look very nice all set up witht he quality wooden components. 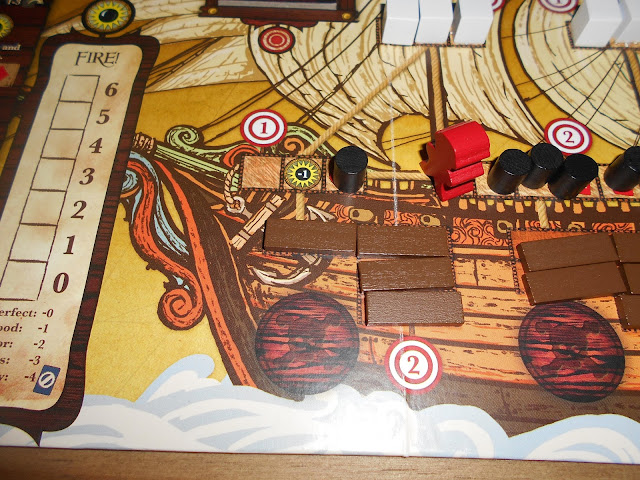 Then you determine damage (again its all walked through in the rule book) and then play continues.. you may get negative effects for damage, having your sails gone will make sheering off (avoiding damage) harder, dead crew harder to repair, and of course hull to make you sink.

To Win you must either eliminate both your opponents first mate and captain, or knock off a total of 10 planks from all the hull zones combined.  Its not as easy as it sounds, as each section takes more damage it becomes harder to inflict more.

So... did this scratch the naval combat itch.... it did yes iuts a solid abstraction of combat with veering off representing limited movement...... Overall, its fun, and plays fairly quickly,  i wasn't sold on loading your guns with random shot, yes its still tactical to have to make the most of what you are loaded with, but i would rather choose my own shot.  I  think that though the components are nice, its certainly on the "higher side" of pricing, so do bear that in mind.  If you are looking for a deep tactical in depth naval game, this is not the one, nor does it pretend to be it.  if you are looking for a game that is a zoomed in part of a naval battle, as in two ships at close range exchanging shot... its good, its fun, and there are plenty of choices to get you thinking, so for a good 2 player game its a solid choice.


With an RRP of £46.99 set a course for your local game store and grab yourself a copy.