Bok's Marauder was a Ferengi D'Kora-class marauder that was in service in the mid-24th century. This ship was commanded by DaiMon Bok in 2364.
On stardate 41723.9 this Ferengi vessel confronted the USS Enterprise-D in the Xendi Sabu system. For three days, they sent no message to the Enterprise, except "Stand by, Enterprise."
Bok was trying to get revenge on Captain Picard for his only son's death at the Battle of Maxia, when Picard was commanding the USS Stargazer. He was subsequently relieved of command by his first officer Kazago for his "unprofitable venture."

So Lets take a look at the first Ferengi addition to the fleet....... 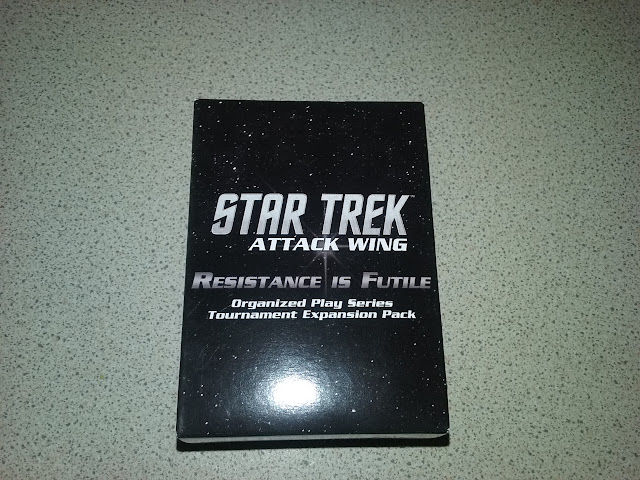 The ship is one of the Blind ships from the Resistance is Futile organised play event, so is not available for retail, though is a Ferengi ship due out to retail soon. 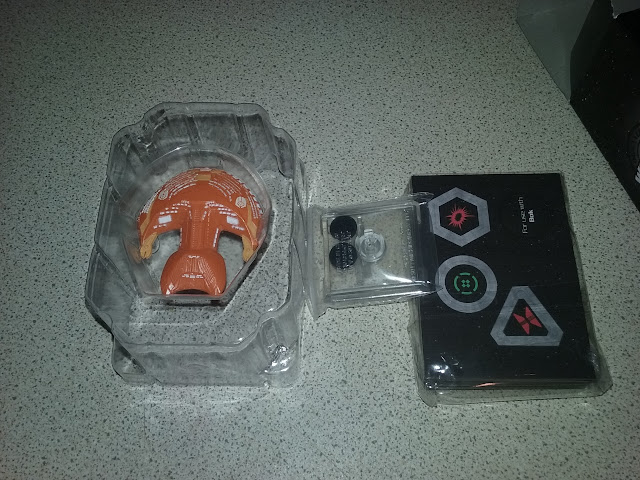 It comes in the blind box, with the smaller card token slabs, but still has all the ones you may need. 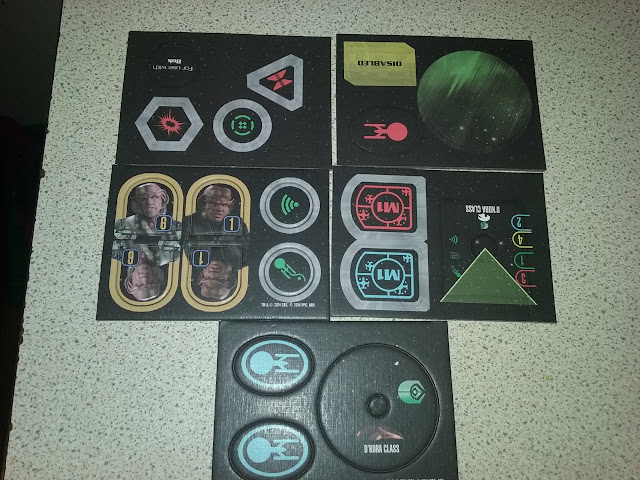 As you can see all the tokens you may need come with the ship. 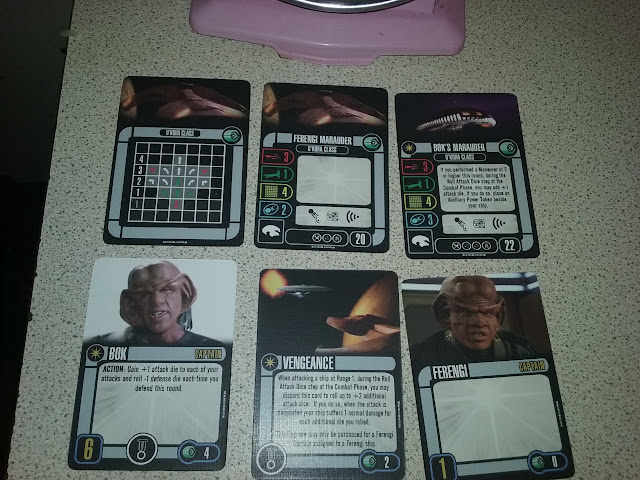 onto the ship! The D'Kora is a fairly manoeuvrable ship for the size, no come about, but It does have a reverse which can be a useful manoeuvre.  As with all the ships you get the generic ship, and the named one Bok's Marauder.  An average firepower, low defence, average hull, average shield. An all round statistically average ship.  The ships special ability is if you do a speed 3 move or higher you can add an extra attack dice for the cost of an auxiliary, so a good way to increase the ships punch, especially if you can do it to end up at range one, and since its not an action you can still use other options.  For captains we get Bok, skill 6 with a talent slot.  His action allows you to gain plus one attack dice at the cost of minus one defence dice.  With the ship only having 1, its not a large drop, but if you are out of firing arc, it just adds more punch, especially if you come in using the ships ability to range one, putting you then at 6 dice, which is very respectable.  You also get a generic Ferengi captain.  The elite talent is Vengeance, it allows you to add two attack dice but after your ship takes 2 damage, so risky, but combined with the other options can allow an 8 dice attack, so it may be enough to take your enemy out in one volley which could be worth it. 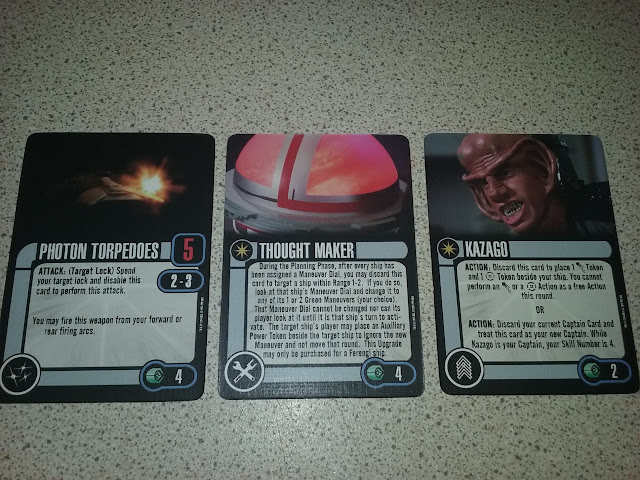 The weapon upgrade is photon torpedoes,  5 dice attack for 4 points adds some long range punch to the ship.  Thought Maker is the tech upgrade for the pack.  Its a fun device, that allows you to change your opponents movement dial.  Kazago rounds the ship out as a crew option.  For an action he discards and places a battlestations and an evade by your ship.  For the point cost, he can be handy, certainly at the right moment. 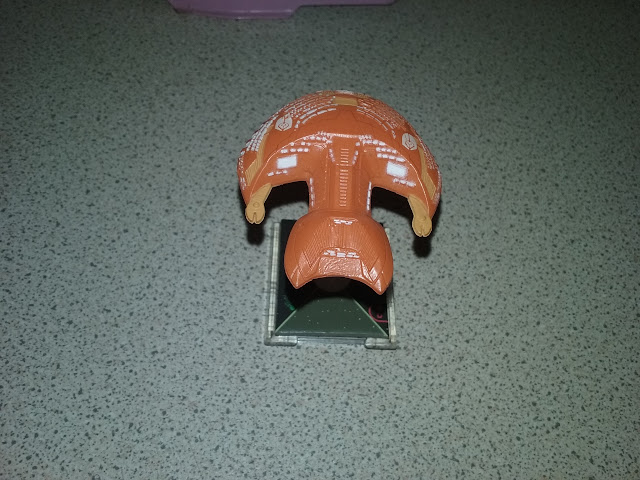 The ship looks just like the ship from the TV show,  its not a ad paint job, again as all the ships a quick wash will set it off nicely. 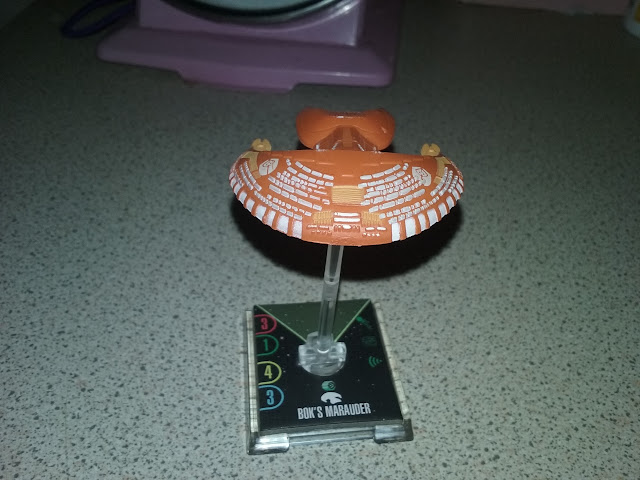 I like the Ferengi logos on the ship, and the shape. 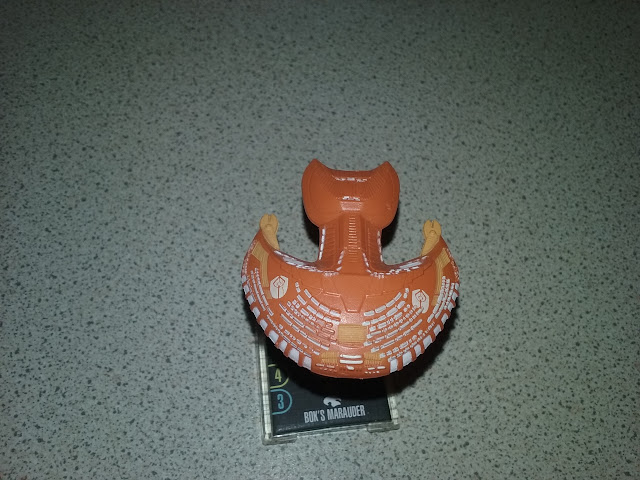 As its a prize ship it doesn't come with a mission, but I am looking forward to trying this and using it in other missions, as there is always a reason to have Ferengi around, so long as it profits them.  The other thing I really like is how this ship ties into the episode so well, I really enjoyed seeing the episode of the show the Battle, so having the crew, and the device from it can make for a fun themed game by itself.