Trying to get the best out of your YT-2400? me too. So I took a look at some build options, then got to test them on the table top as well.  here is the build I settled on as my favourite one, only using cards that came in the pack,so you can run it as soon as you have the ship. 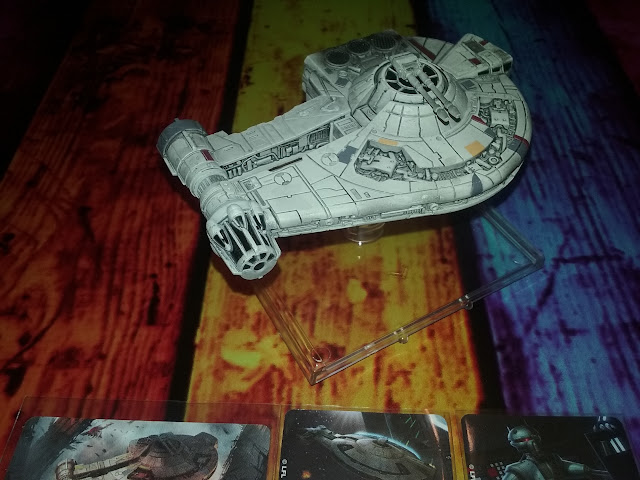 Its a great looking ship, so I wanted it to perform on the table.  Lets take a look and see what we get out of it. 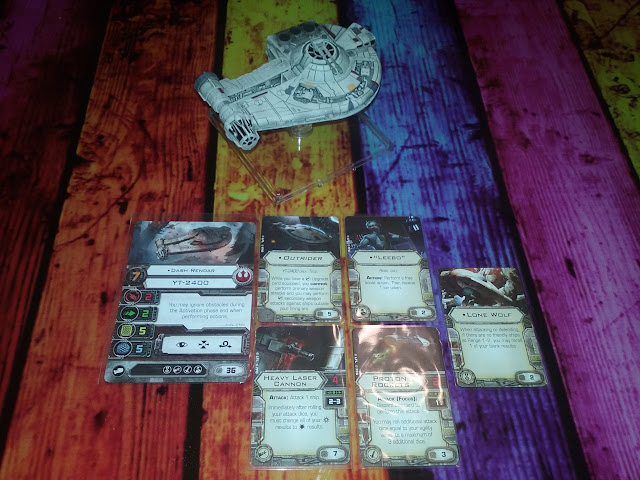 The best pilot to use to maximise the role I havbe in mind for this ship is Dash Rendar.  Not only a cool character from one of favourite N64 games, but a nifty pilot too with a skill of 7 he will be moving close to last, which is important with this build, and shooting early on. 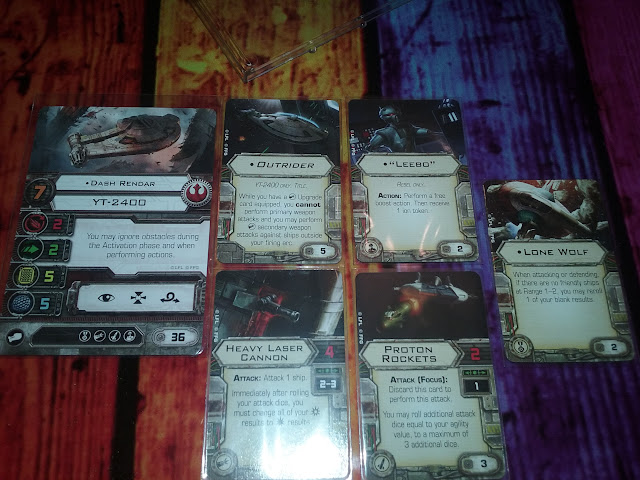 Dashs ability allows you to ignore obstacles during your activation phase and action phase.  Want to land on that asteroid field and still target lock? you can with Dash.  This allows you to pop up in some unexpected places, and forces your opponent to cover himself, as no where is safe on the field.
The Outrider title allows you to equip a cannon as an upgrade, the downside is you can not fire your main armament, only secondary weapons, but it allows you to use the Heavy Laser Cannon in a 360 arc, so now you have ramped up the hitting power of the ship massively.  But its only at range 2-3 you say... well fear not, the ship has a barrel roll manoeuvre so you can always make sure you sat at just the right range to shred your enemy.  Combine the barrel roll with the crew Leebo.  He lets you perform a Boost action so if a barrel roll won't do, you can boost to get yourself in the optimum firing position.  What if your enemy is till at range 1 though, or you can not avoid closing with your enemy.  Proton rockets help here, they fire at range 1 since they are a secondary weapon, they are attack 2, but ad your agility, so you have a 4 attack weapon as a backup if you get too close.
The build is rounded off with Lone wolf, allowing you a re-roll if no other friendly ships are at range 1-2 when you attack.
Take Dash and send him off by himself, let him dive around the battlefield getting the most out of his ability to ignore obstacles, and re-roll with Lone Wolf, and he is a force to be reckoned with!
He provides a real heavy hitter to the Rebel Forces.﻿
Labels: Fantasy Flight Games ship build Star Wars Xwing