The Passing of a Giant

Good day dear readers, the Garage Gamers' rarely needed support team here for a rather sad post. As some of you who follow the Facebook group may have seen our benevolent, Star Trek-loving Garage Gamer overlord Martin sadly passed away on the 19th of May. 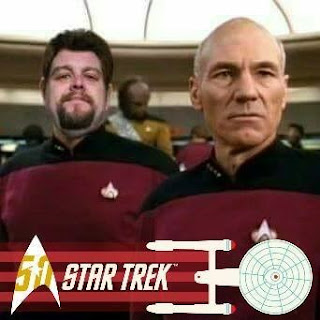 Out of respect for family and friends, some of who also enjoy reading the blog, we figured it best to give it some time before we shared the sad news on here and give Martin a bit of a send off. And, in all honesty, it took us a bit of time ourselves to really come to terms with the loss of a friend and fellow geek.

Naturally our thoughts and condolences go out to his family and friends in this difficult time, particular his favorite player in the world: his beloved daughter Olivia. This is a great loss for everybody and we share in their grief and loss.

As a testament to Mart's productivity, our fellow geek had built up a mighty impressive backlog of all sorts of review and hobby content, there is a year's worth of articles set to publish twice a week. To honour our old friend we are going to let these continue to publish as scheduled with our own posts scattered in the mix. 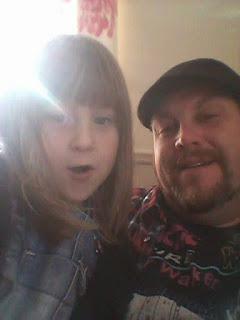 This blog's About Us page states that it is for the "common man". It's a half-lie, as half of the team was a rather uncommon man. I don't know how to condense him, our friendship, what he meant to those who knew him, into one post.

Martin had a steel trap for a mind. He devoured all kinds of information on history and military history and could spit any number of minutiae back at you with the air of a distinguished university professor giving one of their most well-practiced lectures. He was not limited to book-learning and indulged in quite a bit of urban exploration to chase tangible connections to history. On more than one occasion I received pictures from him of bullet holes in bridges in Plymouth where the Luftwaffe strafed the town, or of the cannons that point into the city (a remnant of the English Civil War), among many other incidents of military history.

He was able to bring this recollection to bear in regards to wargaming and boardgaming even from things well in the early days of his "career" in this hobby of ours. All of this made for seemingly endless stories, tales of old fictional or factual or somewhere in between. Never a dull moment having a "natter" with Mart.

Mart brought a whole other level of charisma to the table. Extremely friendly, loved a good naughty joke, knowledgeable on just damn near about everything, and exceedingly British. This blog grew and grew only so on the back of Martin's efforts to cold contact companies, forums, and legends within the hobby.

Beyond his extensive gaming and history knowledge, Mart was a fantastic friend. He sent miniatures across the sea to be painted, helped me with many a letter, formal email, and tricky situations where I greatly needed his wise council... I am going to miss my friend greatly.

The community as a whole has lost an absolute paragon of what it means to be a gamer: gracious, gregarious, generous, and genuine.

From time to time you hear people talking about making friends online over games or hobbies with people from all across the world. People who somehow always have the time for a quick chat, some friendly advice, an eternal willingness to welcome in new folks to a hobby and just general ability to demonstrate how open and friendly a hobby and community can be. That is exactly the kind of person Martin was in my book.

We met online around a decade ago, and he has since become one of the prime examples that come to my mind when people talk about tabletop gaming and boardgaming leading to long lasting friendships. Back in those day, over on the old Astronomican forums, we mostly dabbled with Games Workshop toys and painting wargaming-related miniatures. To this day it surprised me how a single person could be so passionate about both the Skaven and the Lizardmen. Martin was always 'that guy' though, someone that would always see something cool in every new army or game. Though I doubt he would ever have been able to find a game that grabbed him as much as good, old Mordheim, Frostgrave was really giving it a good go though.


Naturally as time passed a lot of the people from that time drifted in and out of the hobby for various reasons, but we kept in touch over the years while dabbling in all those silly, real life activities like school, work and relationships. Then in late 2013 Martin started this very blog, sharing his continuing hobby antics and even recruiting Morgan, another old friend from the Astronomican forum days, to join in on the fun.

At first the blog mostly focused on Flames of War, a game that never really let go of Martin, but over the following months Star Trek and Star Wars slowly squeezed their ways unto the blog and the content became quite diverse with tons of very useful game reviews becoming a weekly feature. It was so much fun to see the blog grow into a sharing community of all sorts of gamers, with Martin being ever cheerful when new folks, old friends and even some names from the golden days of wargaming design would come by to check out this small corner of the web.

Readers particularly enjoyed his gaming exploration with, and frequent loosing streak to, his daughter Olivia. That unique perspective on gaming turned out to be quite inspirational to a lot of people out there, the 'Sharing your gaming hobby with your family' article in particular has remained a favorite of mine. Seen many a comment pass by thanking the blog for sharing great games that are playable in a family setting and I am certain he helped to further show that 'games' are much more than just a distraction and a great way to connect with children ages 0-100+. 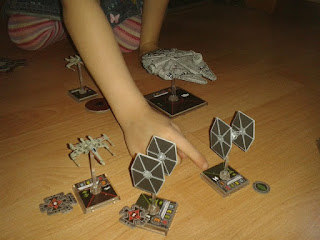 The same goes for the at this point pretty much obligatory 'give your Attack Wings ships a wash to bring out the details', a line that actually got a few people out there to pick up their paintbrushes to do a bit more than just wash a model! Heck he managed to take my mind of things during a rough period in 2012 by 'strong arming' me into painting up a unit of Vespids for his beloved Tau Empire army.

Some of us still more wargaming-centric players out there even managed to tempt Martin back into painting models himself, something he was really enjoying again over the last few months. Not to mention kicking our collective behinds in when it comes to actually finishing projects. Still lagging behind in numbers despite having had a few months' worth of a head start! 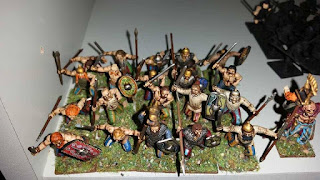 On a personal level, though I never got the chance of meeting him face to face, I got to know Martin as a great friend. Somebody with who anything could and would gladly be discussed. Anything from political shenanigans in our respective countries, being 'old, grumpy men' about changes in the Warhammer lore (oh the grumbling we had over Age of Sigmar), new toys and gaming concepts coming out of the massively expanded game design world, general history nerd stuff  to the highs and lows of our personal lives came by. And from all the responses on social media and other blogs over this last weeks  that was very much how Martin was with everybody. Always time for a listening ear, a laugh or a hobby recommendation.

We are all going to miss you man, thanks for all the good times!

Martin had a huge impact on my life and with his passing I’ve been left with a gigantic hole where there was once lively conversation about nerd stuff, dad things, atomic-era strategic bombers, our mutual obsession over Star Trek, and more. However, all too often when a loved one leaves us, we are too tempted to focus solely on what we’ve lost; the empty holes. Sure, that’s important to acknowledge, but we often fail to do is turn that grief into something positive and meaningful. Today I’ve finally chosen to do just that in remembering Martin Bond. 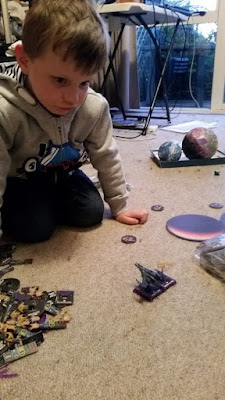 This afternoon I took on the role as healer dad, looking after my five-year-old son, Theo, who’d come down with a bad bout of asthma. I asked him what he wanted to do and through his wheezing and coughing, he said he wanted to play “Star Trek ships”. That’s his go-to playtime activity with daddy. And then it hit me. I have many fond memories about Martin, but the one thing that rises above it all was how he bonded with daughter over gaming. The two had amazing and genuine adventures together as only a father and child could have. He and Olivia gave me such an amazing example to help me to connect with my own son. Without Martin’s and Olivia’s Star Trek Attack Wing after-action reports on this blog, Theo would not have his Star Trek ships.

Martin showed that you can connect games with children. He taught me to have some patience, allow them to make their own rules and let them just have fun. Over the past year we’ve done just that. Theo has dived into Star Trek with both feet, starting with Attack Wing. Since then he’s built lego and mobilo Enterprises, roleplayed Star Trek at his daycare (and now at his school), has had me order specific Attack Wing ships, find second-hand fleets for him, and more. He even had an Original Series birthday party with a bunch of kids who had no idea what was going on. Nevertheless Theo took time to explain what the different badges meant (Command, Science, Engineering) and even helped design the party games, such as repurposing the classic easter egg hunt game for a “Seek Out Strange New Worlds” game with styrofoam planets he helped paint. For a five-year-old, Theo really loves Star Trek.

That is Martin’s gift to me and my son; the hole that is not empty. He scaffolded me so that I could connect with Theo through my love of Star Trek. Simply put, this very close connection with my son would not currently exist had I not known Martin. That’s how I remember him. Thank you Martin, and may I have the courage to share what you've taught me to help dads connect with their children. 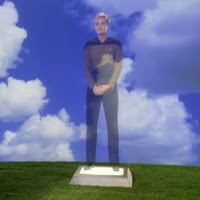 In honor of Martin's unequaled love of Star Trek: The Next Generation, I'll close with the final words of Lt. Tasha Yar:


Death is that state in which one exists only in the memory of others. Which is why it is not an end. No goodbyes. Just good memories. Hailing frequencies closed, sir.